Between the sacred and the everyday
Old City Jerusalem

Visiting Al Quds, as the Palestinians call the Holy City of Jerusalem, you live by the rhythm of the Adhan, the muezzin’s call for the Muslims to pray and the chiming of the church bells. Join Javier Gonzalez while he explores the flagstone streets of East Jerusalem from dawn till dusk.

“Hurry to the prayer. Hurry to salvation. God is Great! God is Great! There is no god except the One God.” A chant as powerful as it is captivating startles me at dawn. The Adhan, the muezzin’s call for the Muslims to pray, echoes amplified through the streets of the Old City in East Jerusalem. I decide to take a walk while Palestinian Jerusalem gently awakes.

The scent of exotic aromas lingers in the air, surrounding the ancient ochre pavements and walls like a scented blanket. A cat scurries away nervously. A shopkeeper sleeps peacefully outside his shop. I love early morning walks as they offer the priceless opportunity to experience cities in a solitary way. It renders you one with the city. 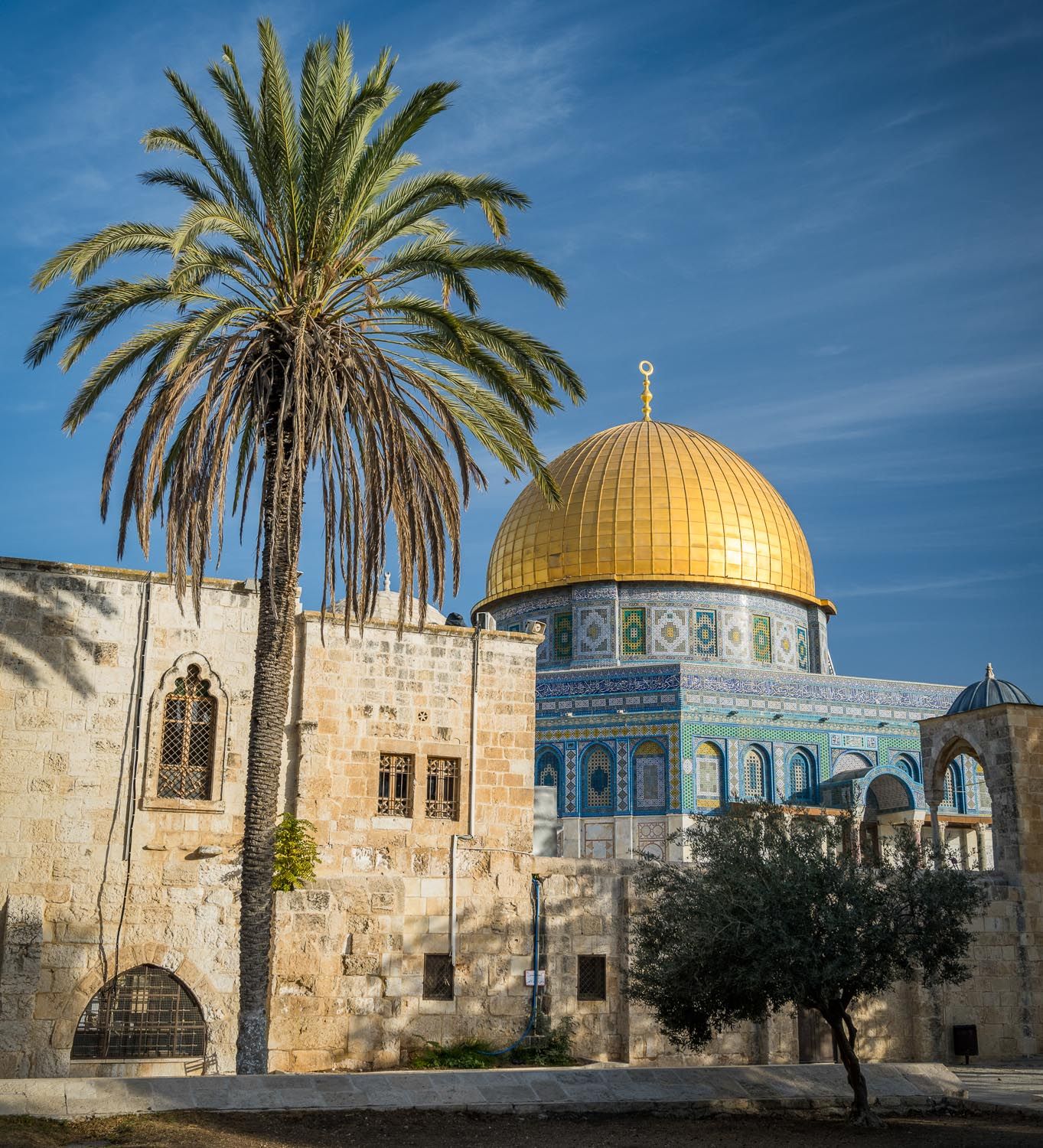 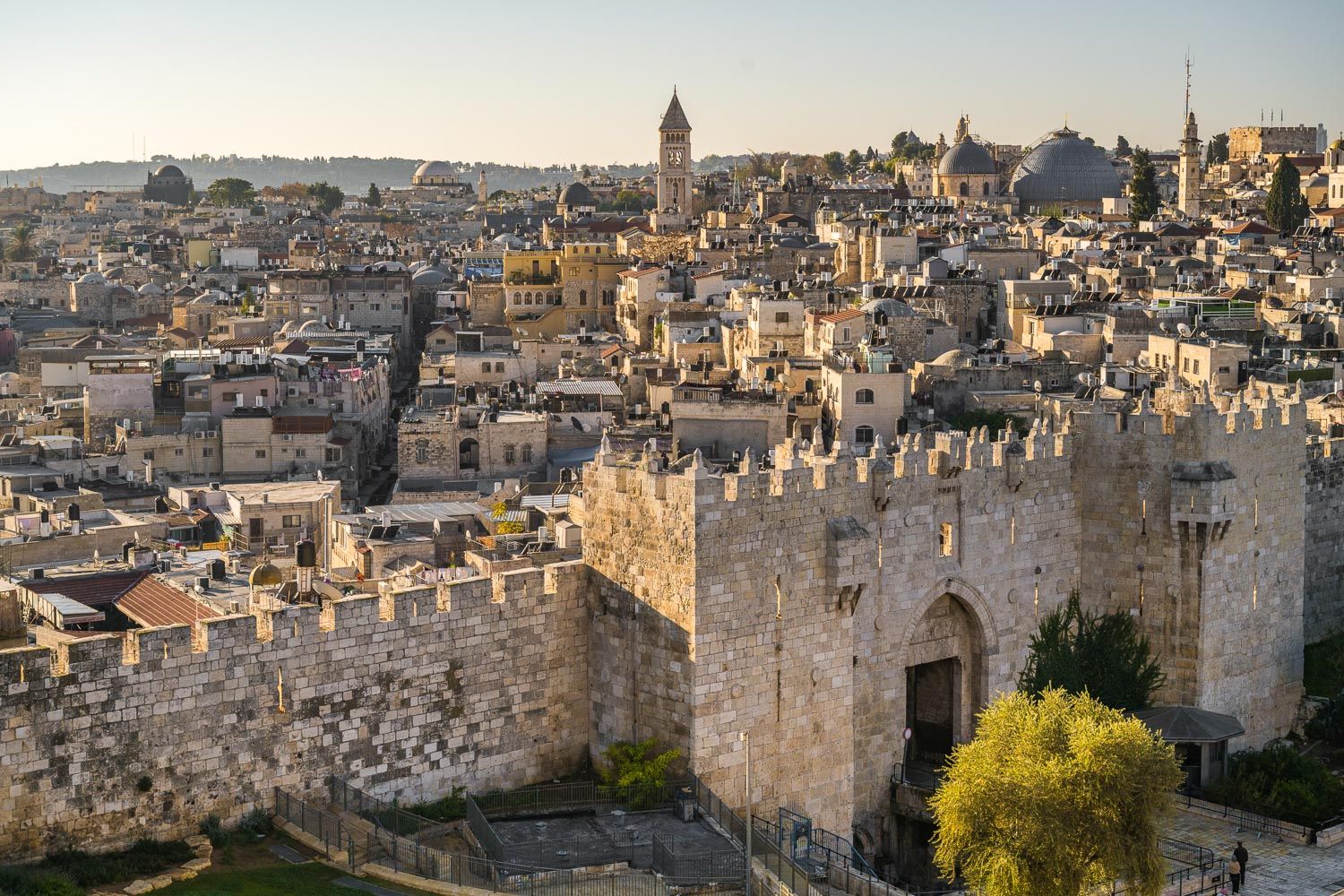 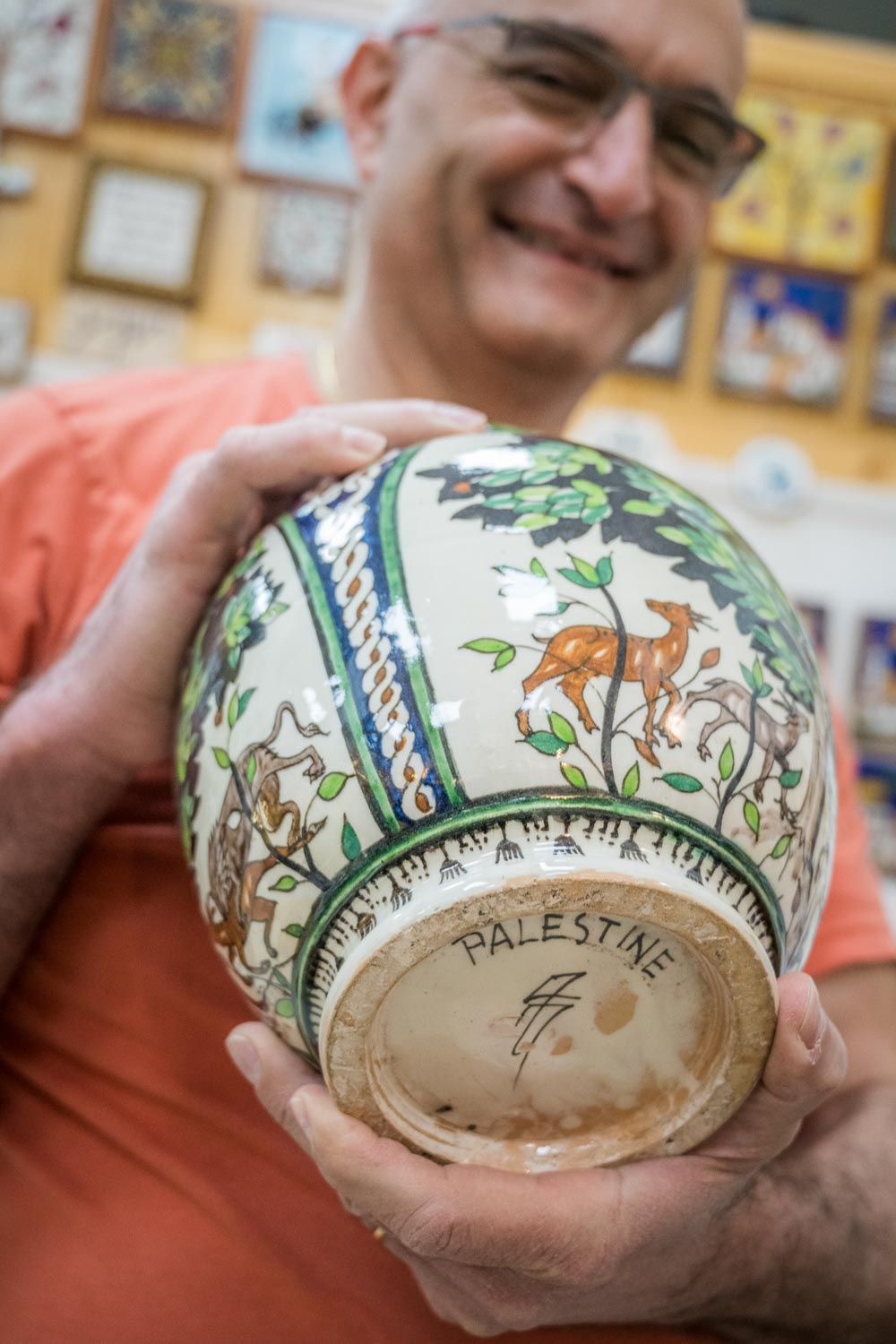 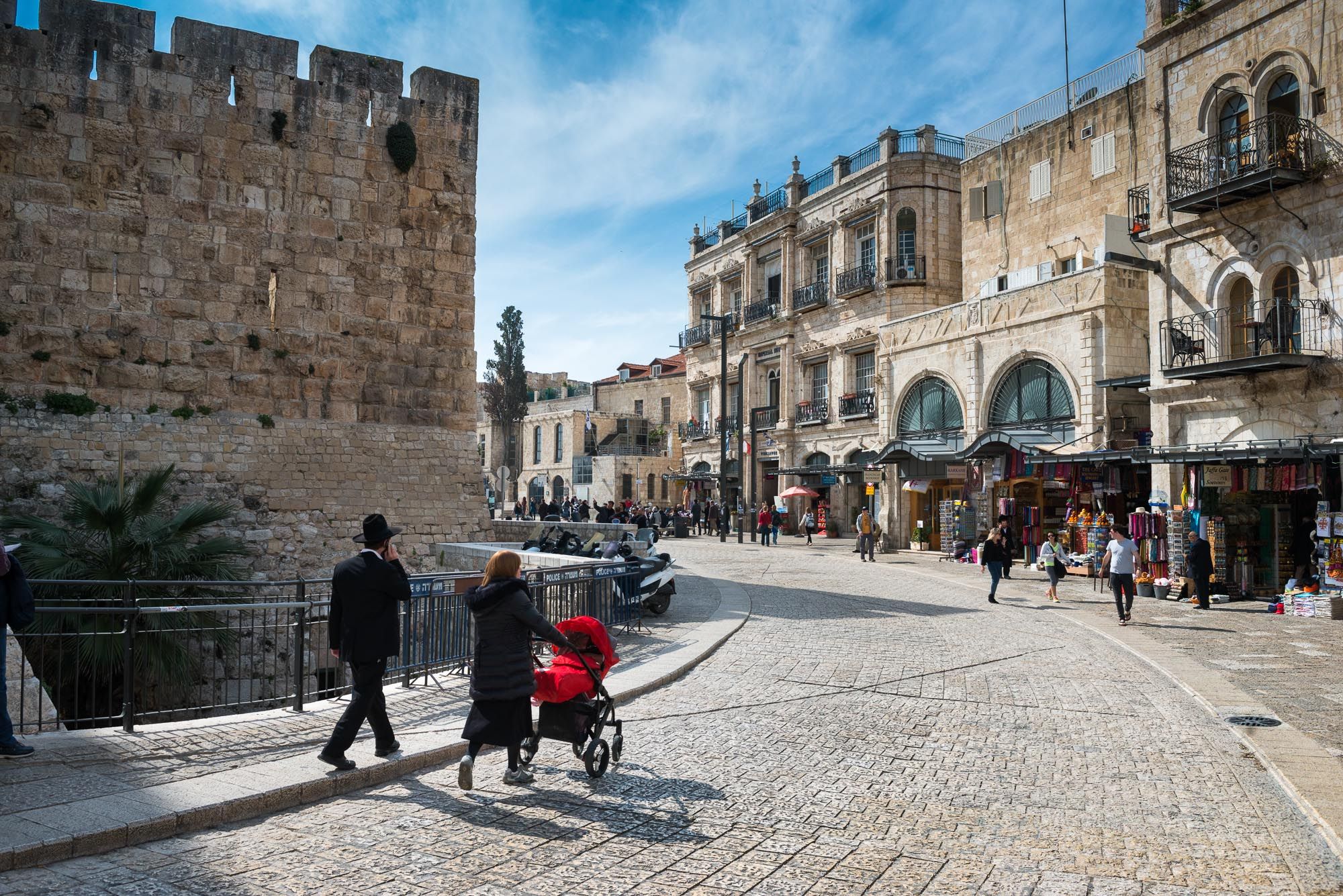 JERUSALEM POTTERY
We arrive at number 3, Greek Orthodox Patriarchate Street, where, behind a simple sign announcing Jerusalem Pottery, hides an over a hundred-year-old Armenian pottery shop.

“My father emigrated from Turkey in 1918 because of his skill as a craftsman,” says Hagop Karakashian, the shop’s owner. “In 1919, the British commissioned a group of three Armenians to renovate all the decorative tiles of the Dome of the Rock. Why a group of Armenians? “At that time, Armenians had an excellent reputation as ceramic artists.”

The project was eventually canceled because of the Muslim community’s reluctance to have three Christians working on their holiest site. But the artists could no longer return to Turkey because of the Armenian genocide between 1915 and 1916. “My grandfather stayed and decided to open his handmade pottery business. He was the first generation,” Hagop says.

Looking at Hagop’s grandfather in a photo, I think of how many stories almost every portrait hanging in a Jerusalem shop holds. “There is a way to tell if the street signs are pre-1967,” Hagop says. “Before, the names of the streets of Jerusalem were only written in English and Arabic. After 1967, Hebrew was added. My father started making the signs by hand in 1965. After 1967, the Israelis commissioned my father to finish his work with all the street names in three languages. My father made all the original plaques. It took him until 1979,” Hagop smiles proudly.

“In 1919, the British commissioned a group of three Armenians to renovate all the decorative tiles of the Dome of the Rock”

With so much competition in the market, don’t you think it is tough for travelers to tell the difference between a genuinely handmade piece of pottery and one made in China? “Indeed it is,” Hagop answers my question. “But my job is to enlighten them. To make them aware of the history and the work behind each piece.” We move on to the workshop, where his daughter is working hard on the design of various pieces. It seems like a relaxing task. Almost meditative. “Nowadays, everything is mass-produced, at industrial levels,” Hagop tells me. “But many people still value the poetry behind the handmade pieces. 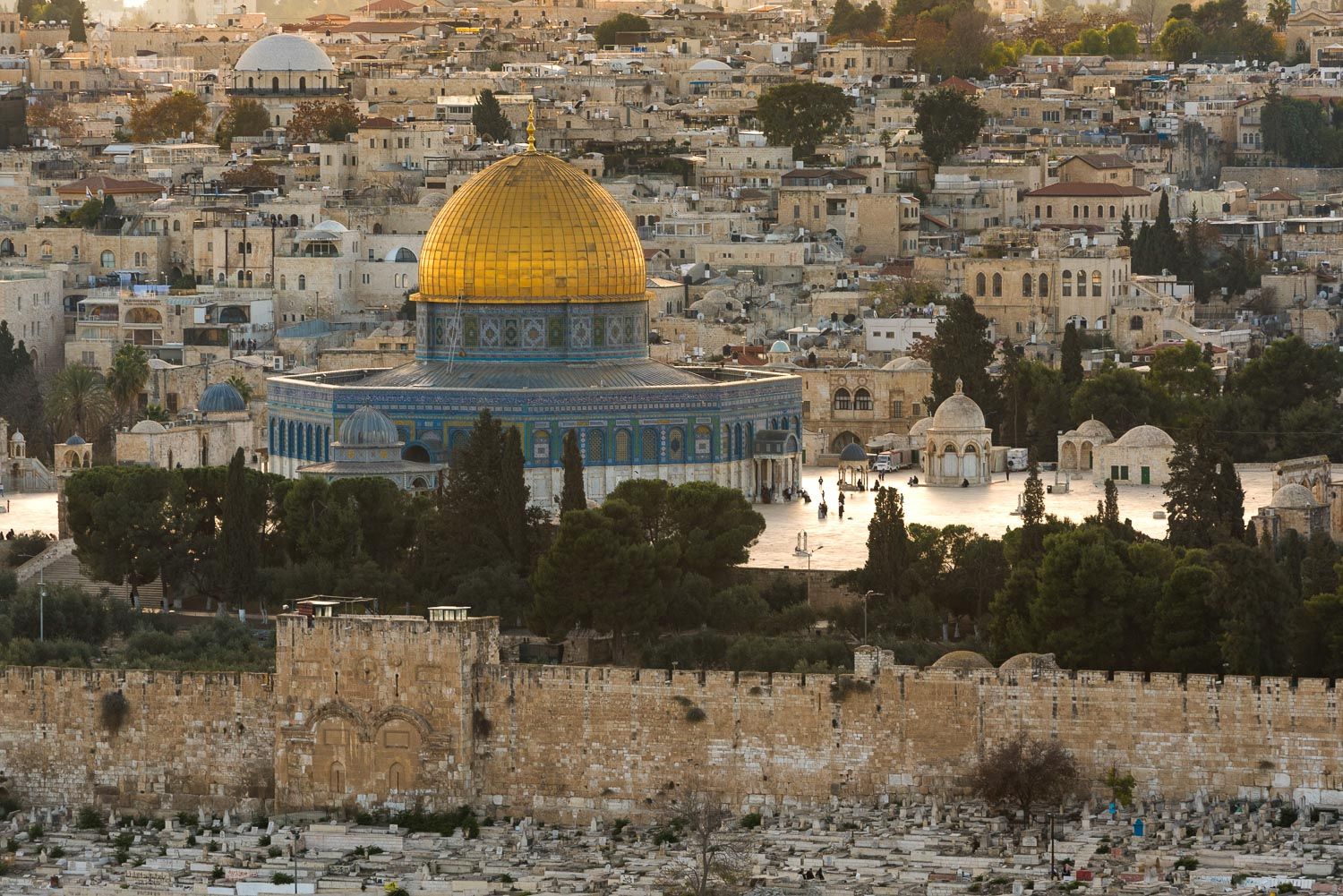 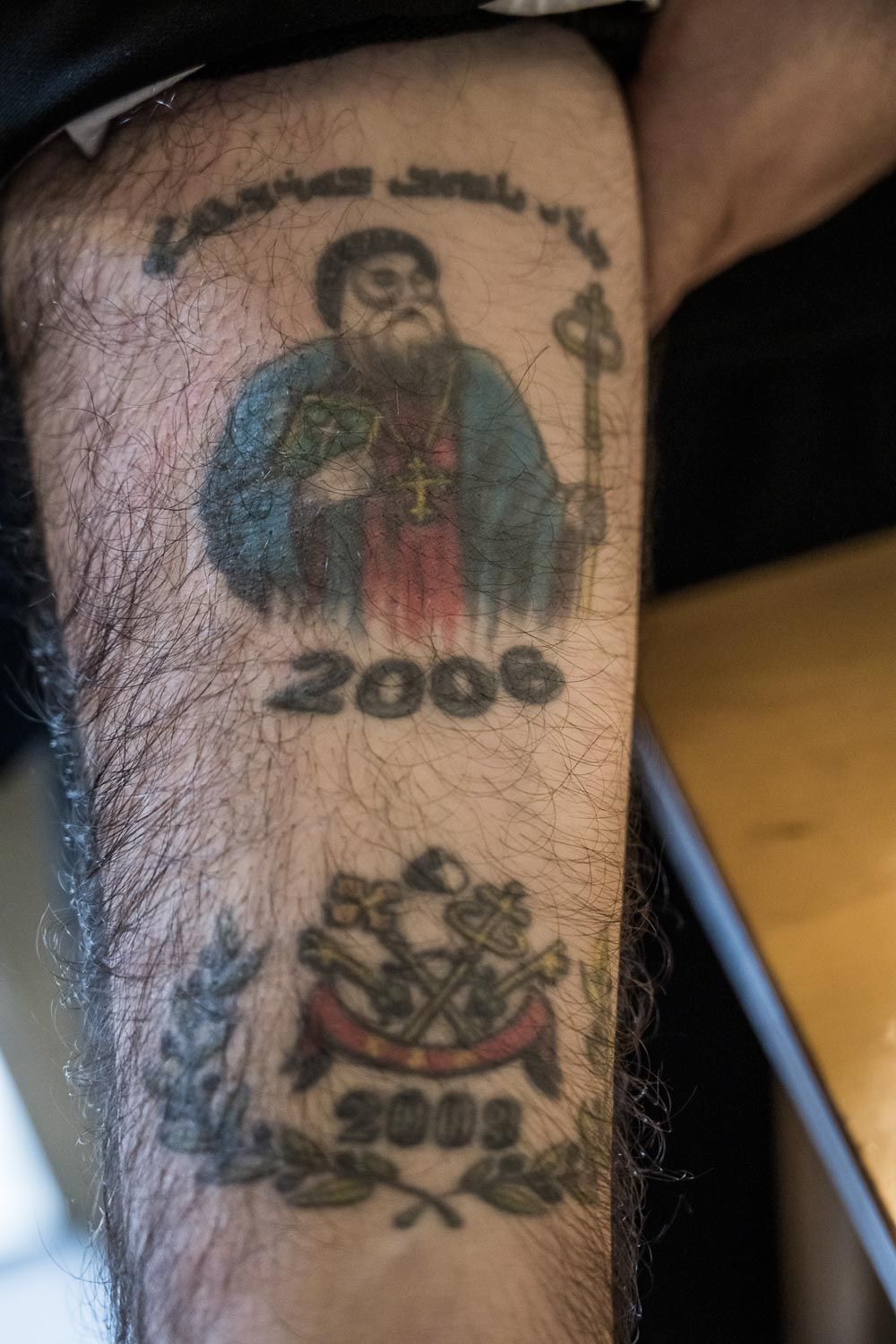 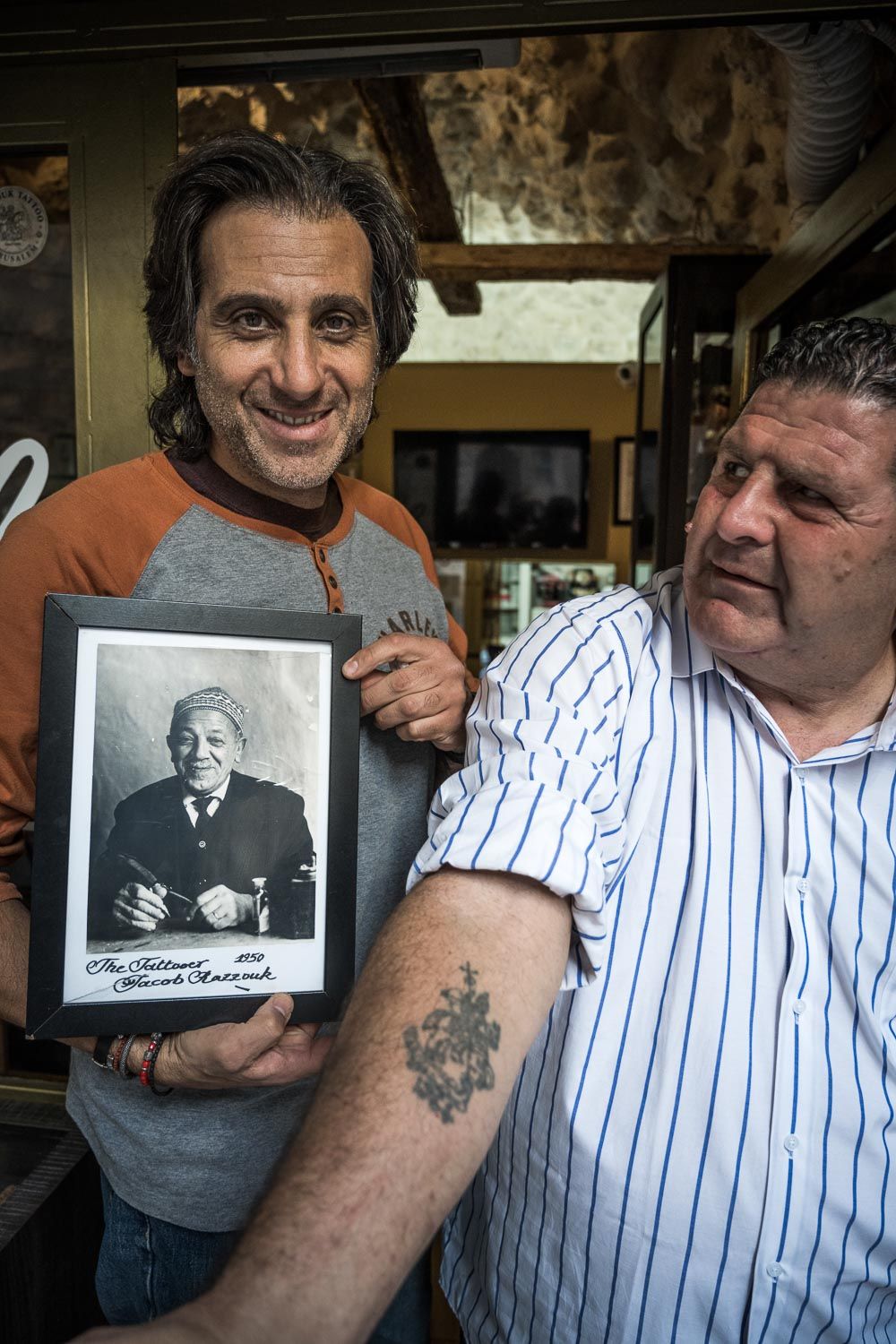 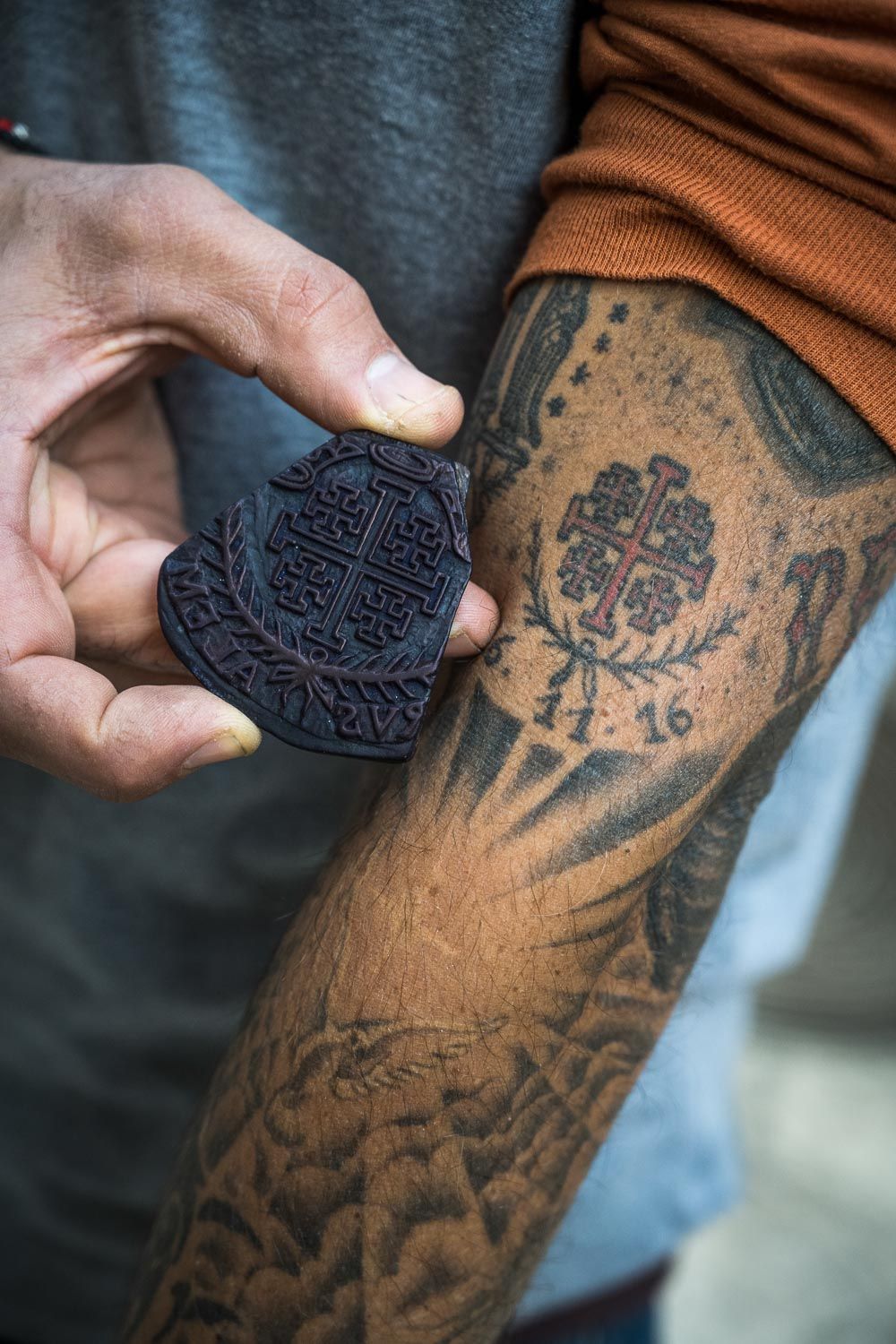 TATTOOS SINCE 1300
A seven centuries-old tattoo studio in the Old City of East Jerusalem? Oh yeah. Welcome to Razzouk Tattoo, inking skin at Shvil Saint George since 1300. Two Harleys are parked outside. Inside, Wassim Razzouk finishes tattooing a client in his small studio, as his ancestors have been doing almost since the beginning of times. “My family has been doing tattoos for 700 years,” he says proudly. “We are a Coptic family who came from Egypt 500 years ago. For more than a thousand years, in Egypt, it has been a tradition for Christians to get a small tattoo of the cross on their wrist to mark themselves and distinguish themselves. And my ancestors were the ones who did those tattoos.”

As he speaks, I look at his fully tattooed left arm and his wrist adorned with Harley Davidson bracelets. “500 years ago, my ancestors came to the Holy Land on a pilgrimage. They discovered that there was a very similar tradition. Christian pilgrims would get tattoos to certify their holly voyage and show off their new status as pilgrims who had reached the Holy Land and made it back.

“In those times, it was not as easy as it is now to travel across continents. People got sick and even died trying. It was a real adventure,” he says. His words make me think about how the concept of travel, pilgrimage, or adventure has changed over time. “So someone coming to the Holy Land wanted this mark on their body for spiritual and social reasons. That’s how my family started tattooing Christian pilgrims, and we’ve been doing so for 27 generations.”

I leaf through the book of designs. I see the angels Gabriel and Abaddon, the archangel Michael fighting the devil, scenes of the crucifixion and the resurrection of Jesus, Mary Magdalene, swords, and crosses. You name it, Wassin can create it. “The most demanded design is the Cross of Jerusalem, which symbolizes the city as the center of the world. I feel the pride and responsibility to keep this tradition alive in the Holy Land,” says Wassin. 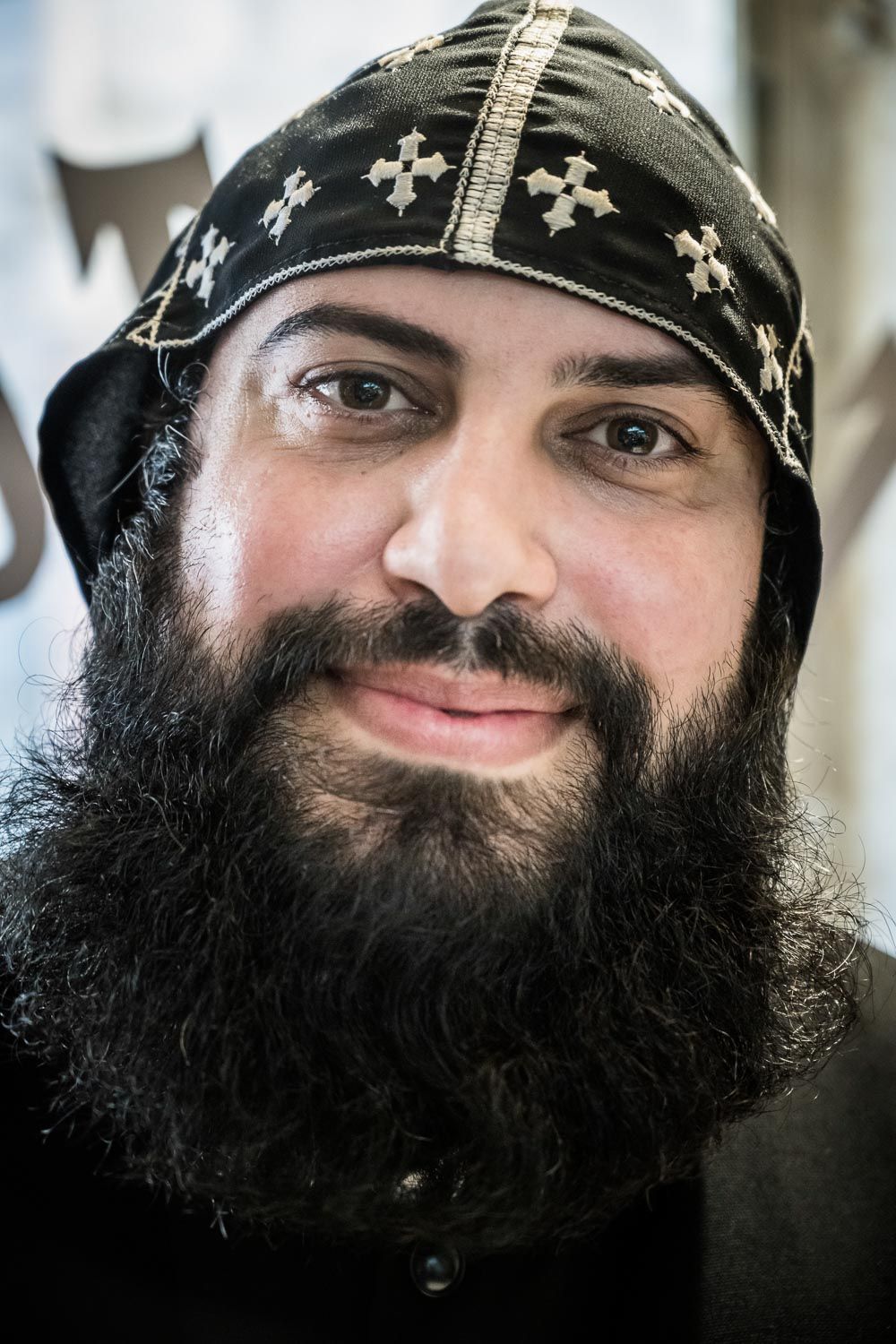 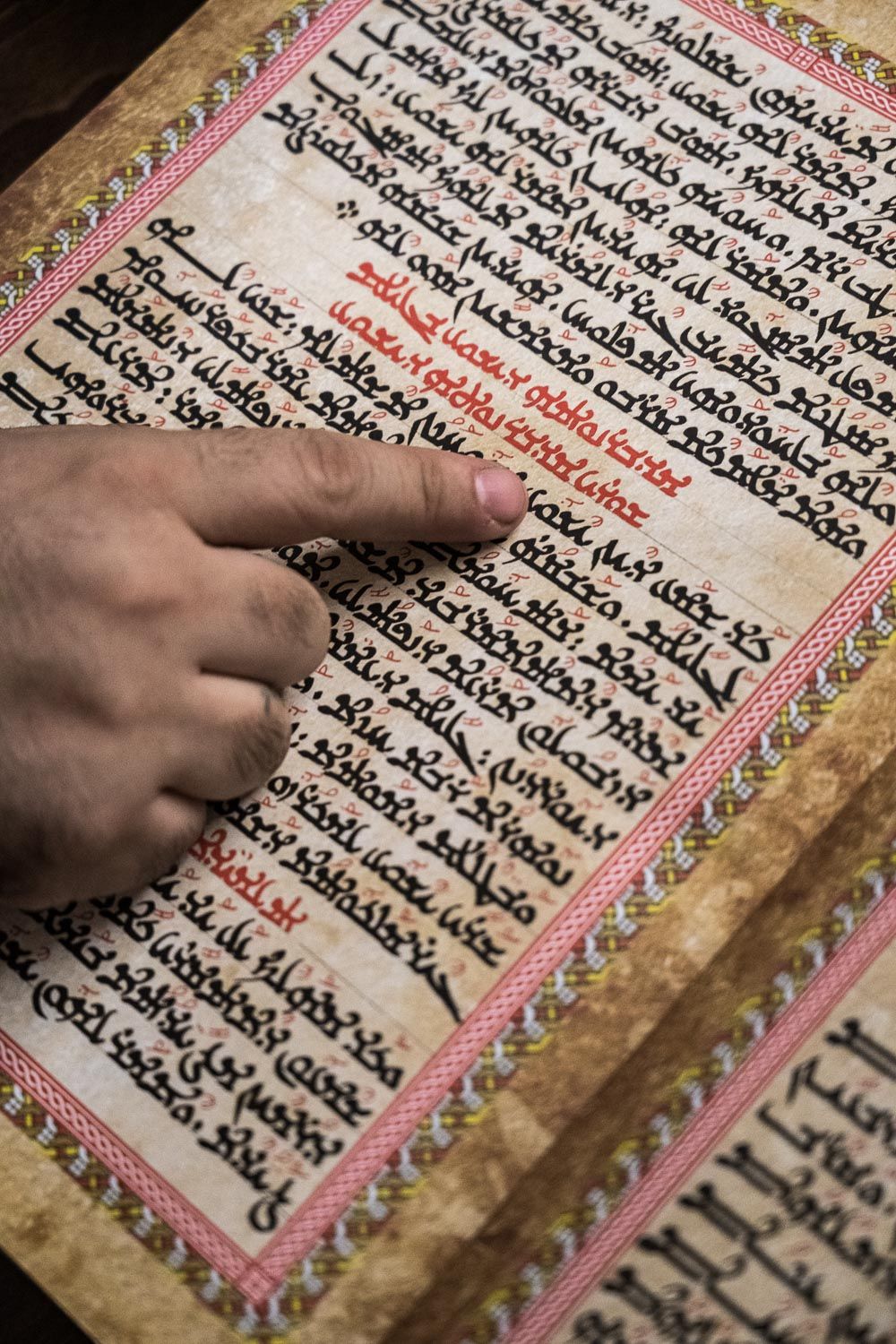 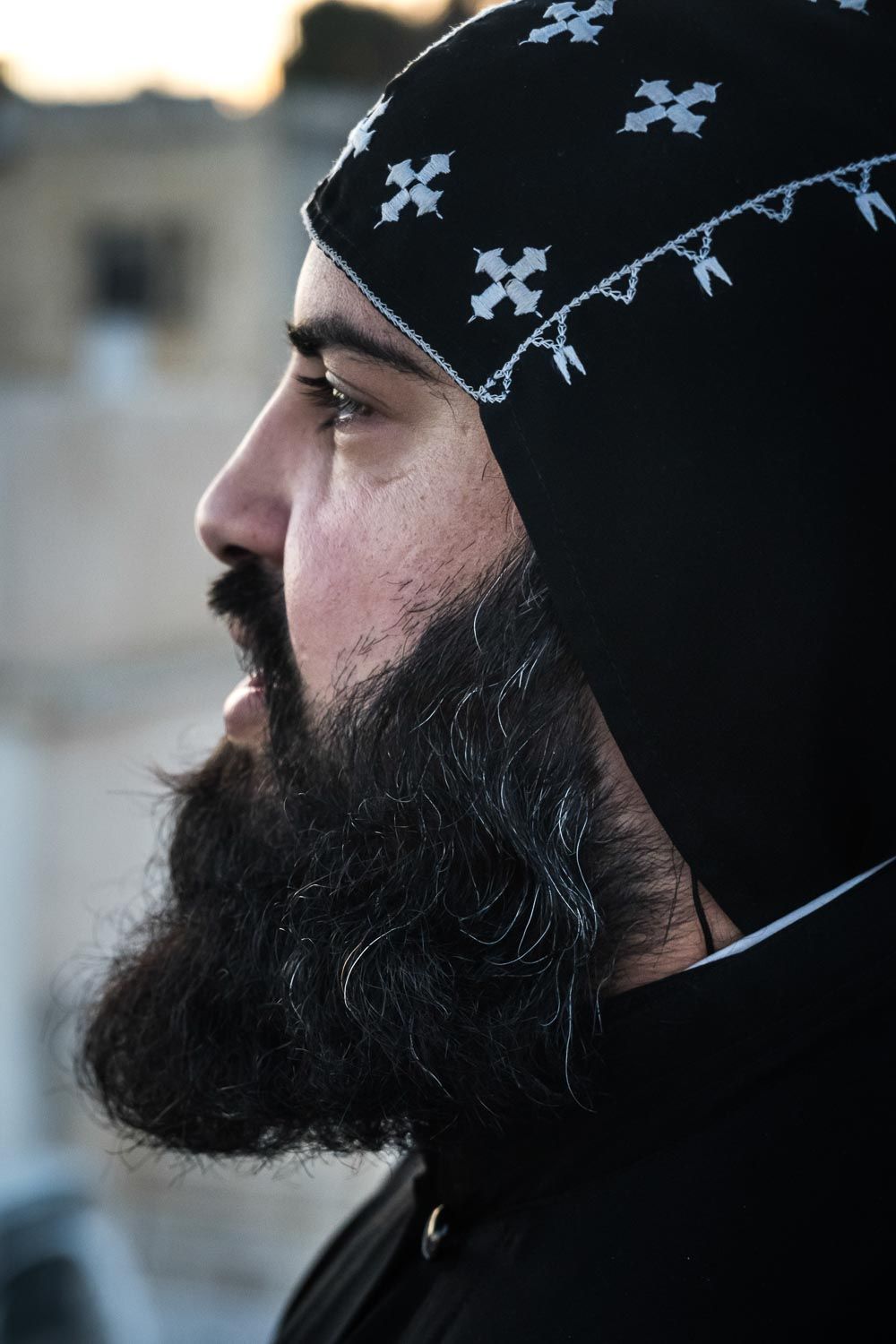 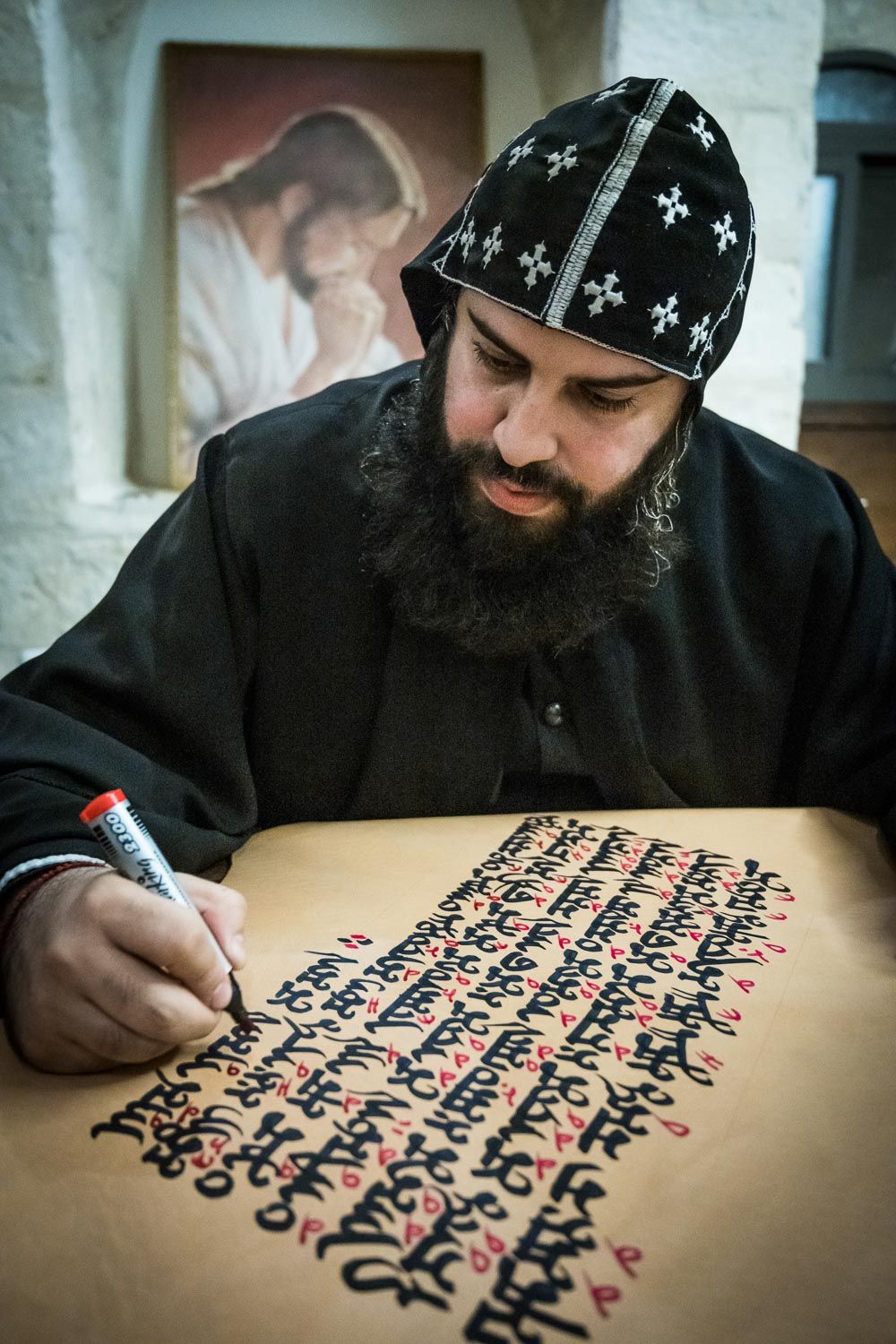 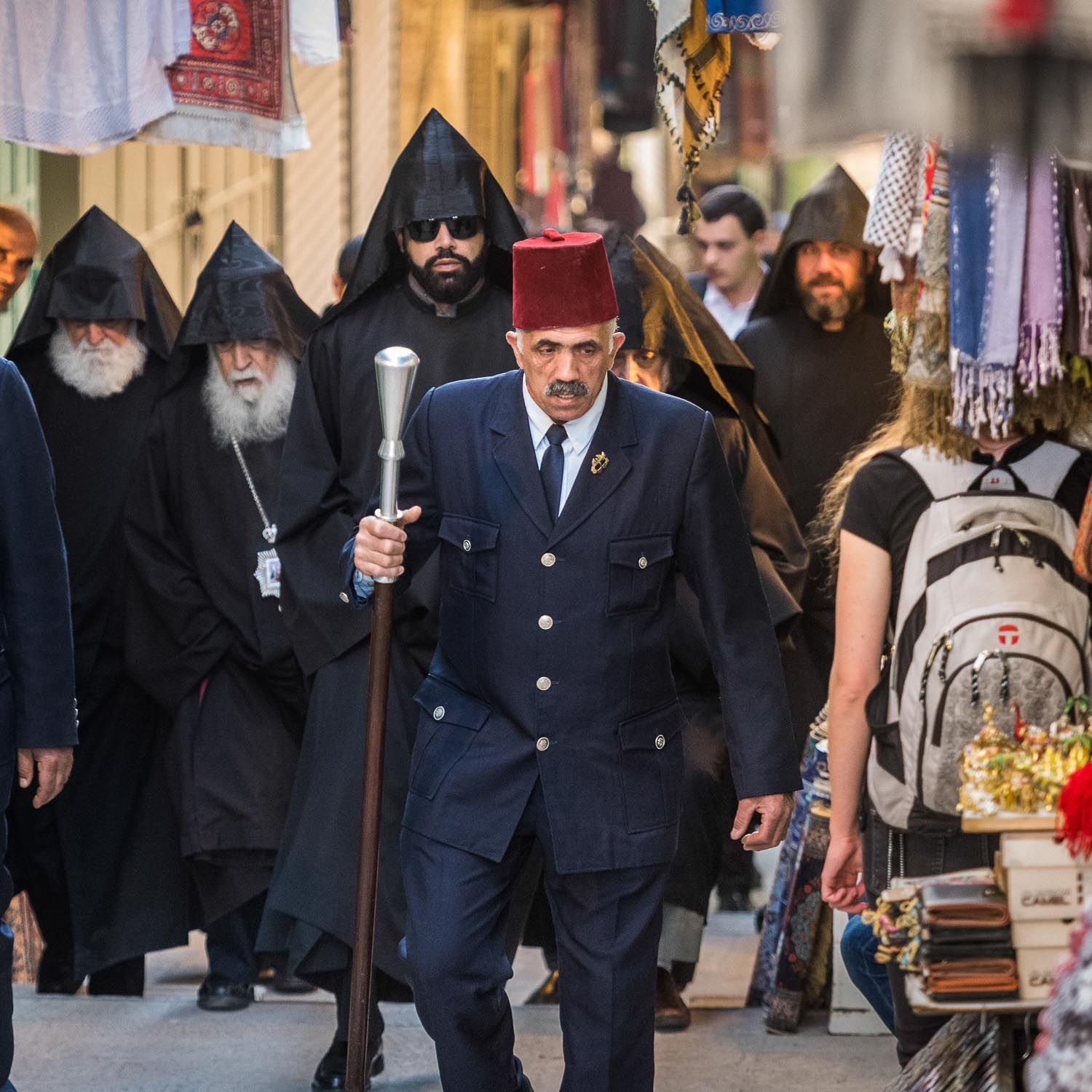 THE LAST SCRIBE
Sometimes one story leads to the next. And almost without realizing it, we accompany a monk we have just met in the tattoo studio. Dayroyo Boulus was born in Jerusalem and is one of two monks at St Mark’s Monastery. Located in the middle of the Armenian and Jewish Quarter, St. Mark’s is one of the oldest Christian churches in the world, established in 73 AD.

Today it is the spiritual home of one of the oldest Christian denominations in Christianity, the Syriac Orthodox Church, founded in the 1st century AD by the Apostles Paul and Peter themselves.

“It takes a lot of patience and passion. It has become a prayer, a way of communicating with God”

Christian monasticism was born in the Egyptian desert, from where it spread with incredible speed. At the beginning of the 5th century, some 700 monasteries existed between the desert of Jerusalem and the southern borders of the Byzantine Empire in Egypt. Today Dayroyo is one of the last scribes of the Syriac Orthodox Church. “I spend all my time, every day, my whole life dedicated to developing the talents God has given me. Singing and writing. When I practice them, I become an ambassador of God”.

He takes us into a room to spread out his scrolls and markers. On the walls are diplomas and newspaper clippings. He demonstrates the art of writing in ancient Aramaic, a dead language at least three thousand years old, recognized as the possible language of Jesus of Nazareth.

How did you begin to develop this skill? I ask, intrigued. “When I started writing, I asked God for a sign. And God sent it to my window. Three days in a row. That’s how I started writing the Gospel of Mark. It’s 16 chapters, perfect for me to start my practice. “For years, I have developed this talent by practicing ten hours a day,” Dayroyo says as we watch his strokes flow fluidly across the paper. “It takes a lot of patience and passion. It has become a prayer, a way of communicating with God.”

His talent and skill with a language that has fallen into disuse have made him a celebrity among religious and government authorities. “Even the King of Jordan wants to meet me,” he says proudly. “It’s an art that appeals to Muslims, Christians, and Jews alike. After the Armenian patriarch’s visit, the patriarch promised him two gifts: a bottle of cognac and Armenian citizenship. “I’ve already drunk the first one; it clears my voice for singing,” he says with sparkling eyes. “The second is coming soon. Because I’m Palestinian, it will make it much easier to travel when I need to. How much do we owe you, my friend? “I don’t do it for money,” he says. “I feel that I will lose God’s blessing if I do business with it.” 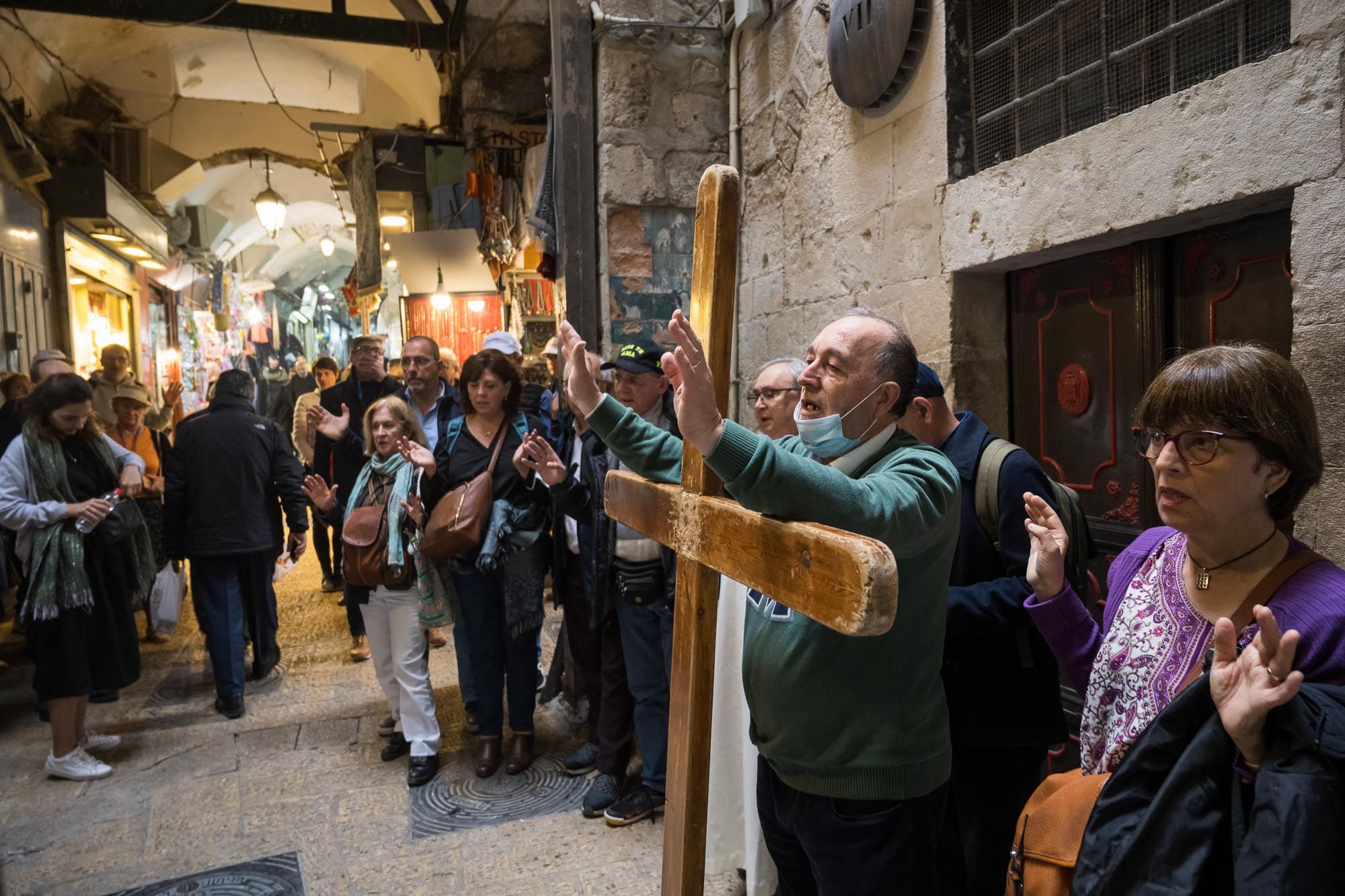 THE CITY AS A MUSEUM
The Old City of East Jerusalem has long captured the imagination of artists around the world. The city has repeatedly been positioned at the heart of contradictory narratives, represented as a religious symbol and emblem of national and cultural identities. How does art contribute to creating, modifying, or deconstructing these narratives? How do artists see, feel and live in their city?

We leave the Old City’s walls through Herod’s Gate to 8 Al Zahra Street. At the top of a beautiful house, almost hidden from view, is the Al Hoash Gallery. Today the exhibition “And We Still Follow its Path” opens, a compilation of 13 Palestinian artists’ visions of the city. There is a youthful, artistic atmosphere on the busy steps leading up to the gallery. Lumberjack shirts and horn-rimmed glasses. I hear Arabic, English, and French.

I stop in front of a curious city illustration. “What I did was find a way to represent the whole city in an apolitical and irreligious way,” says Yasmine Mansour, the work’s creator entitled “The City as a Museum.” Yasmine has a degree in architecture from the American University of Sharjah. Despite her youth, she has already participated in several exhibitions, with works that deal with vernacular architecture in the Middle East.

“I went to the old city and looked at the elements that I have been dealing with throughout my life, largely with an architect’s eye,” Yasmine tells me. “And I asked a friend to photograph all the everyday things that she thought were representative of Jerusalem’s culture. Then I took those elements and worked on the composition of the work, which is like a storyboard that allows you to explore the city with the curious eyes of a newly arrived tourist.” 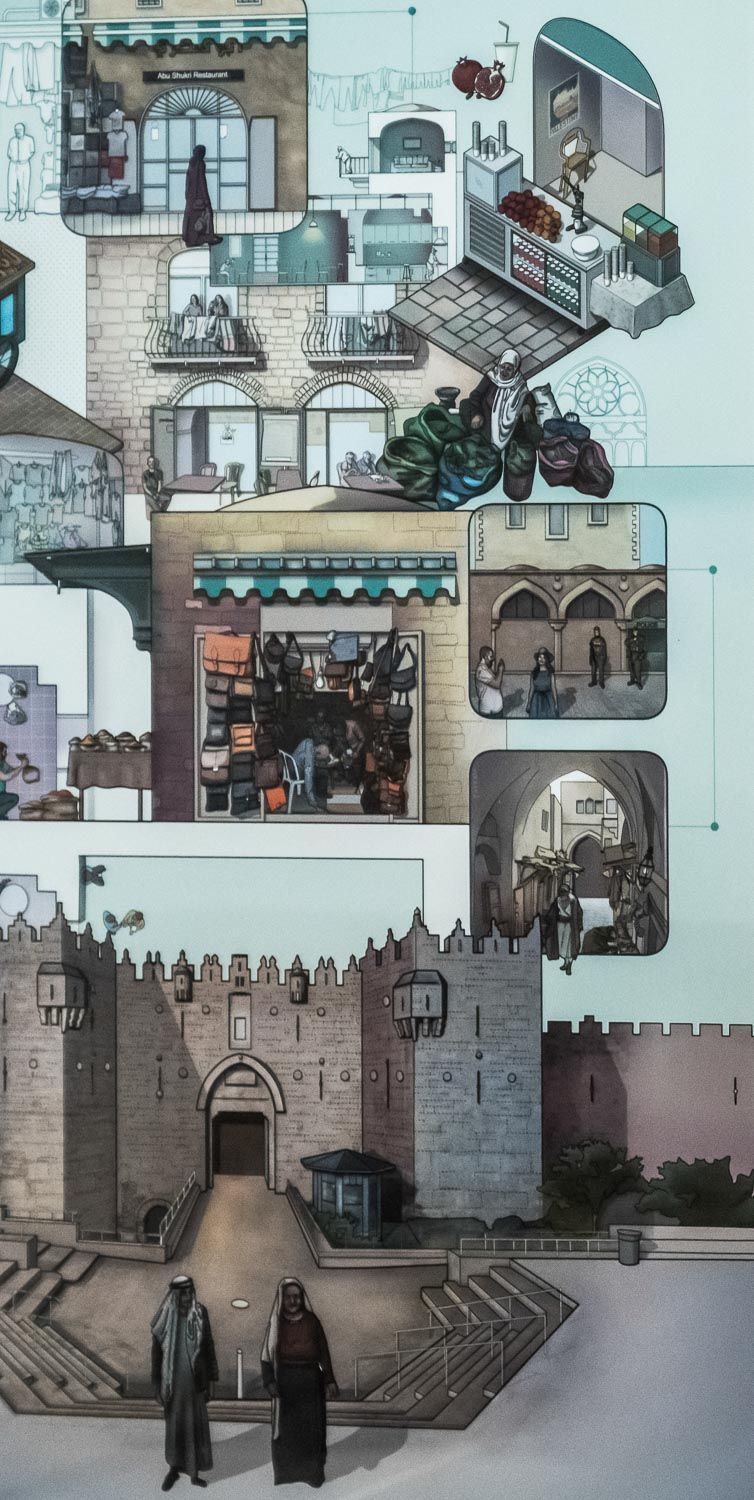 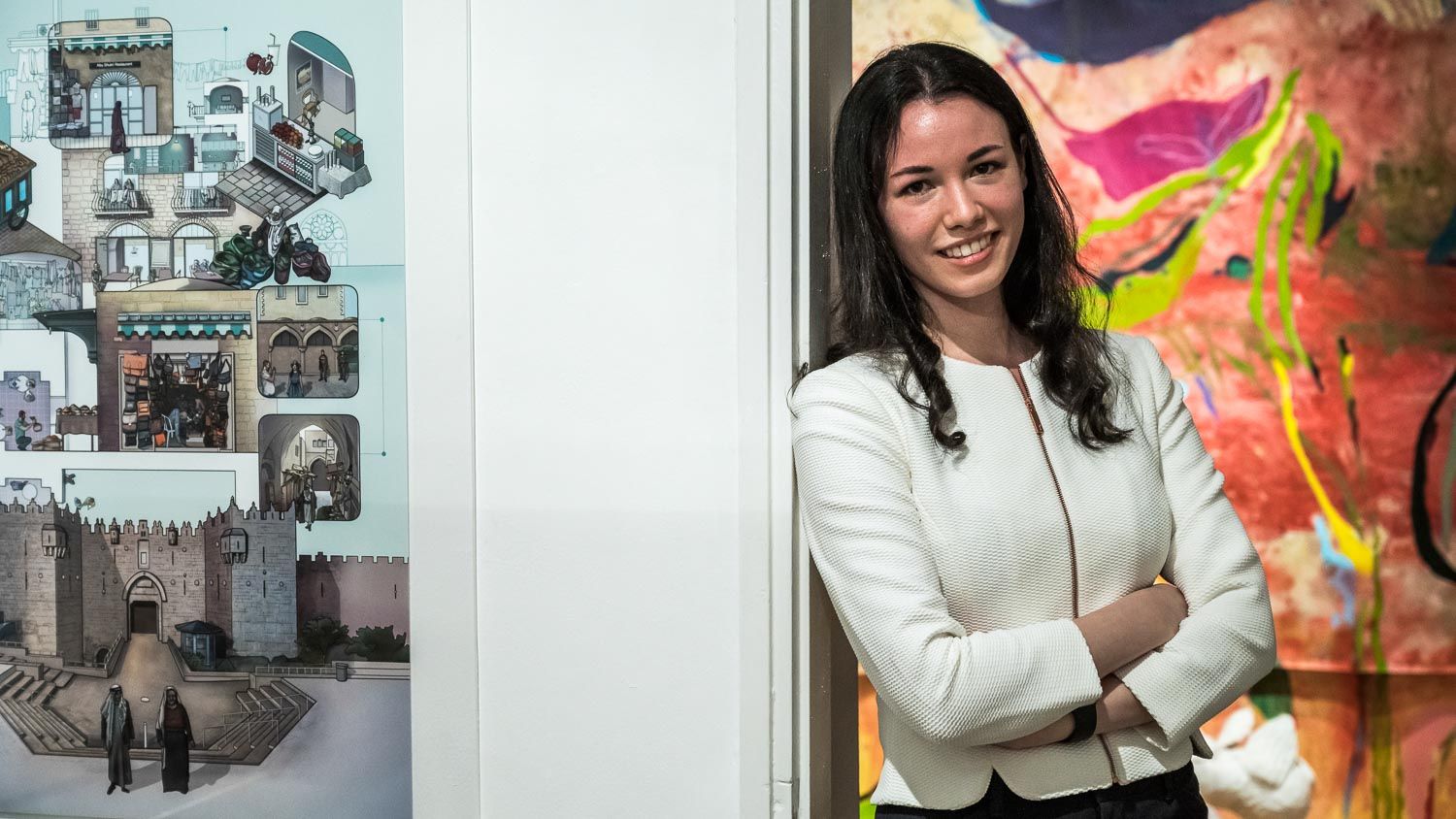