Walking through the Garden of Eden
Alpe Adria Trail

Traveling through stunning Slovenia, descending from the Julian Alps to the Adriatic Sea, you come across plenty of water. Crystal clear waters in the form of waterfalls, lakes, rivers, streams, springs and finally the sea. We are following the highlights of the Alpe Adria Trail, the 750 km long-distance hiking trail from Austria to the Adriatic sea in Italy. Are you coming along?

Light-grey chalk limestone stocks dominate the green wooded landscape of the Julian Alps, where the borders of Italy, Austria and Slovenia meet. I am walking through a dry riverbed above the Trenta Valley in Slovenia. At this height, the water in these limestone mountains, also known as karst mountains, lies deep underground. It is July and the summer sun is already mercilessly burning down onto my head. Luckily I don’t have far to go and my hearty breakfast of salami, artisan cheese, olives and homemade plum jam seems to have been good preparation for my walk.

A little further along, the valley narrows and seems to peter out into a small gorge. I carry on walking between the two steep rock faces and cross a stream running through the canyon. My objective is practically around the corner and the noise grows ever louder. Suddenly there is a horrifying scream, startling me and causing me to take a step back. Is there someone in danger, I must do something! I resolutely push on around the last bend, mentally ready to spring into action, and I find myself face-to-face with 4 girls who look as terrified as me. 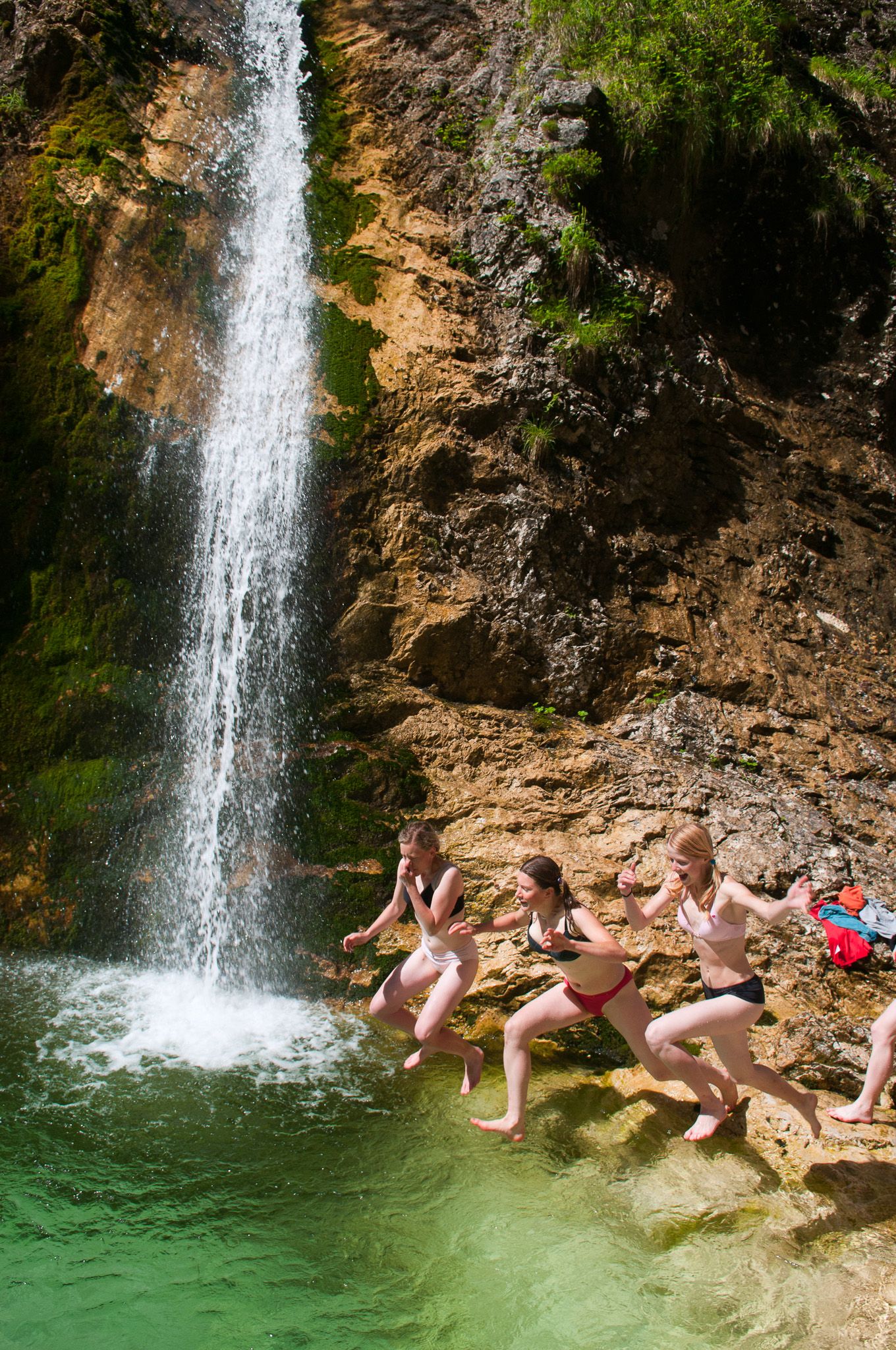 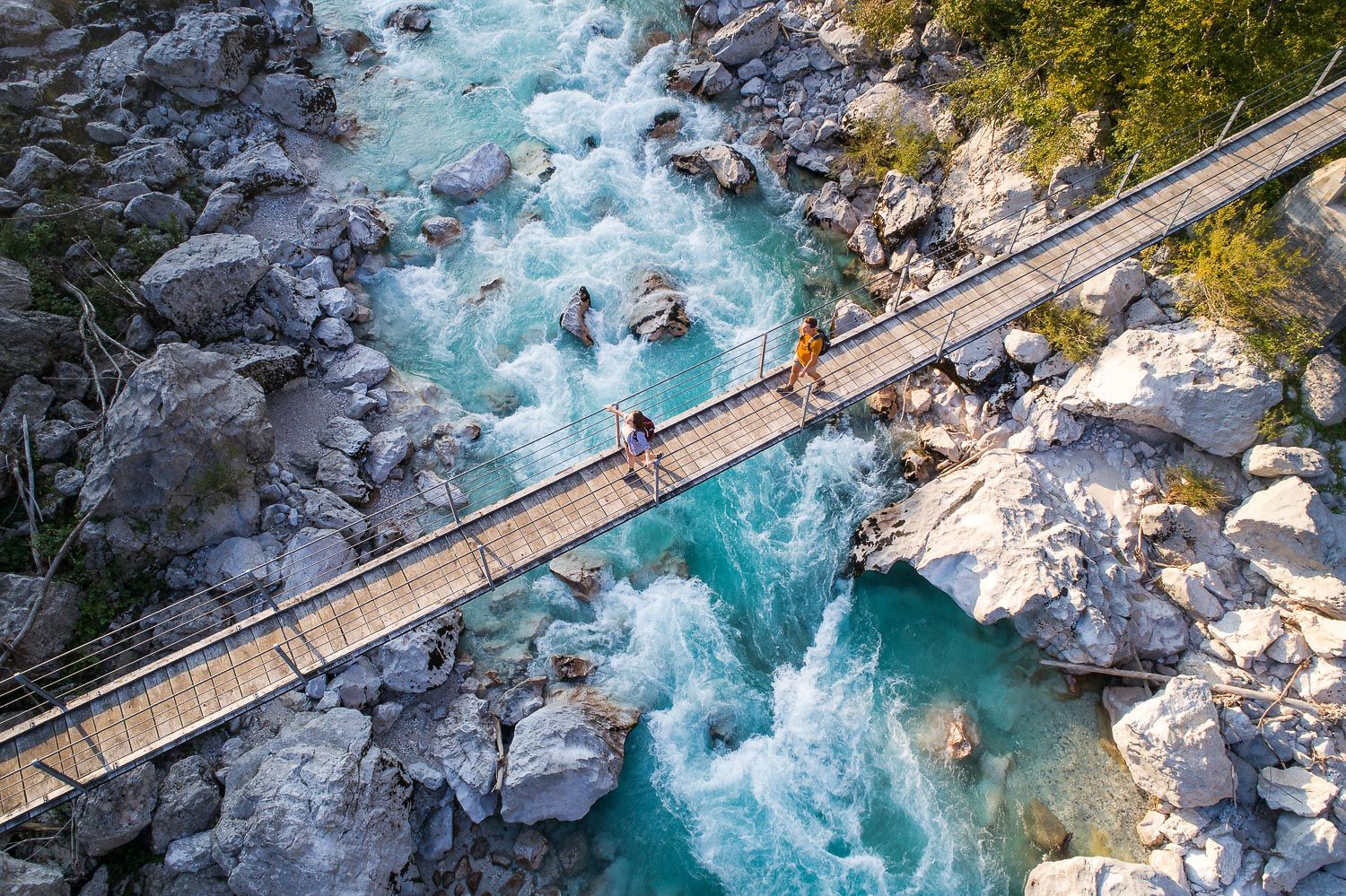 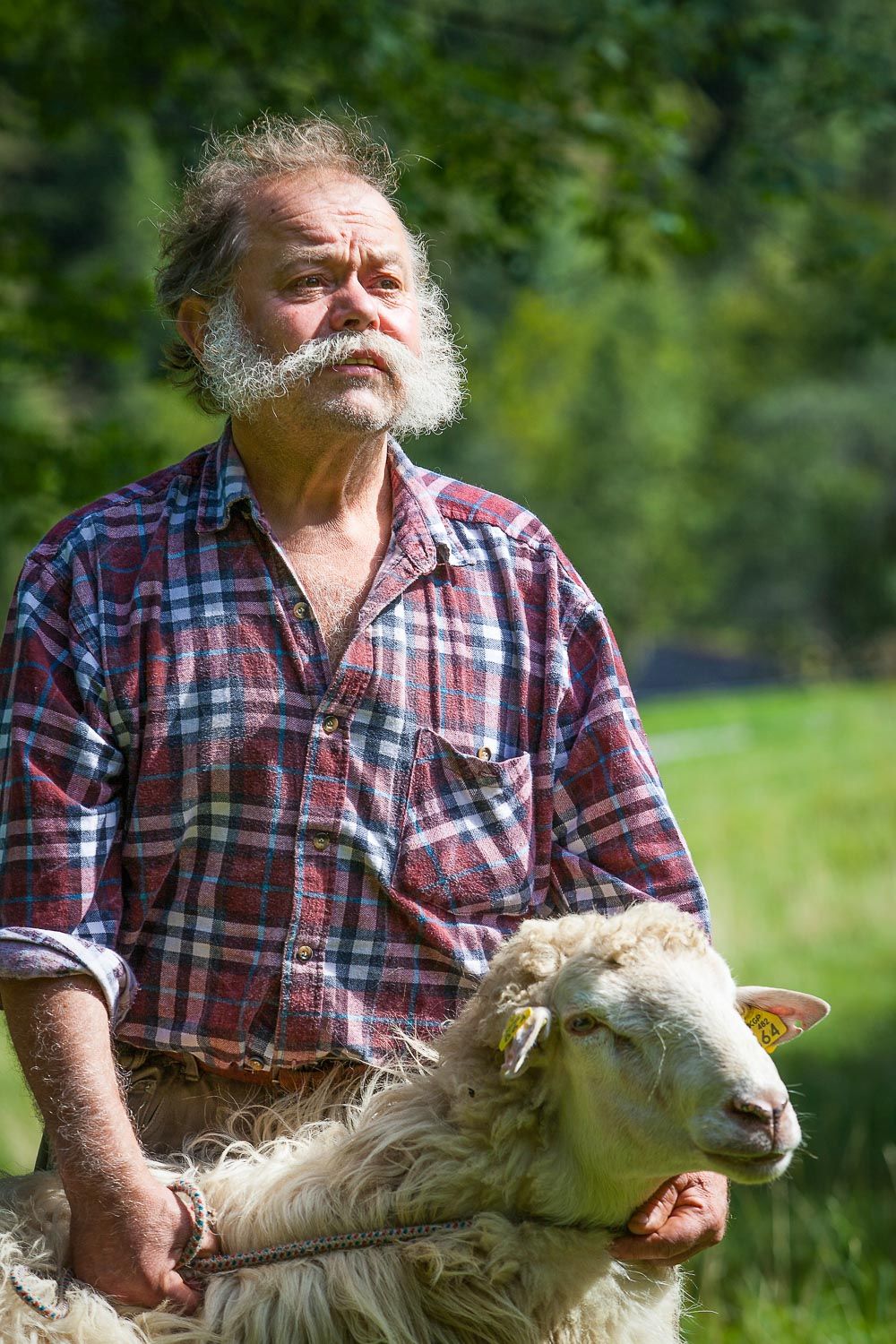 They stand in their underwear, dripping wet and shivering. They had just jumped into the “cooling” waters of the Slap Zadnja waterfall, a little ambitious perhaps in temperatures below 10⁰C. The girls are from the Czech Republic and have come to Slovenia for a healthy dose of adventure, nature and by hiking through Triglav National Park. I indefinitely postpone my plan to take a dip in the waterfall, bid the girls farewell and walk back to ‘Kekec Home’, the farmhouse high in the Trenta Valley where I spend the night.

Suddenly there is a horrifying scream, startling me and causing me to take a step back. Is there someone in danger? I must do something!

My arrival in Slovenia was nothing short of spectacular. From Kranjska Gora, I ascended into the massif that is the Julian Alps.  For centuries the Vršič Pass was impregnable, but during the First World War, the Italian army needed to build a military road through the pass. More than 10,000 Russian prisoners of war were put to work on the road, with hundreds and hundreds dying in miserable conditions. What was back then an almost impossible task, is even more impressive today. On the way, I braved more than 29 hairpin bends measuring thousands of metres in height as I cross over from the border with Austria. 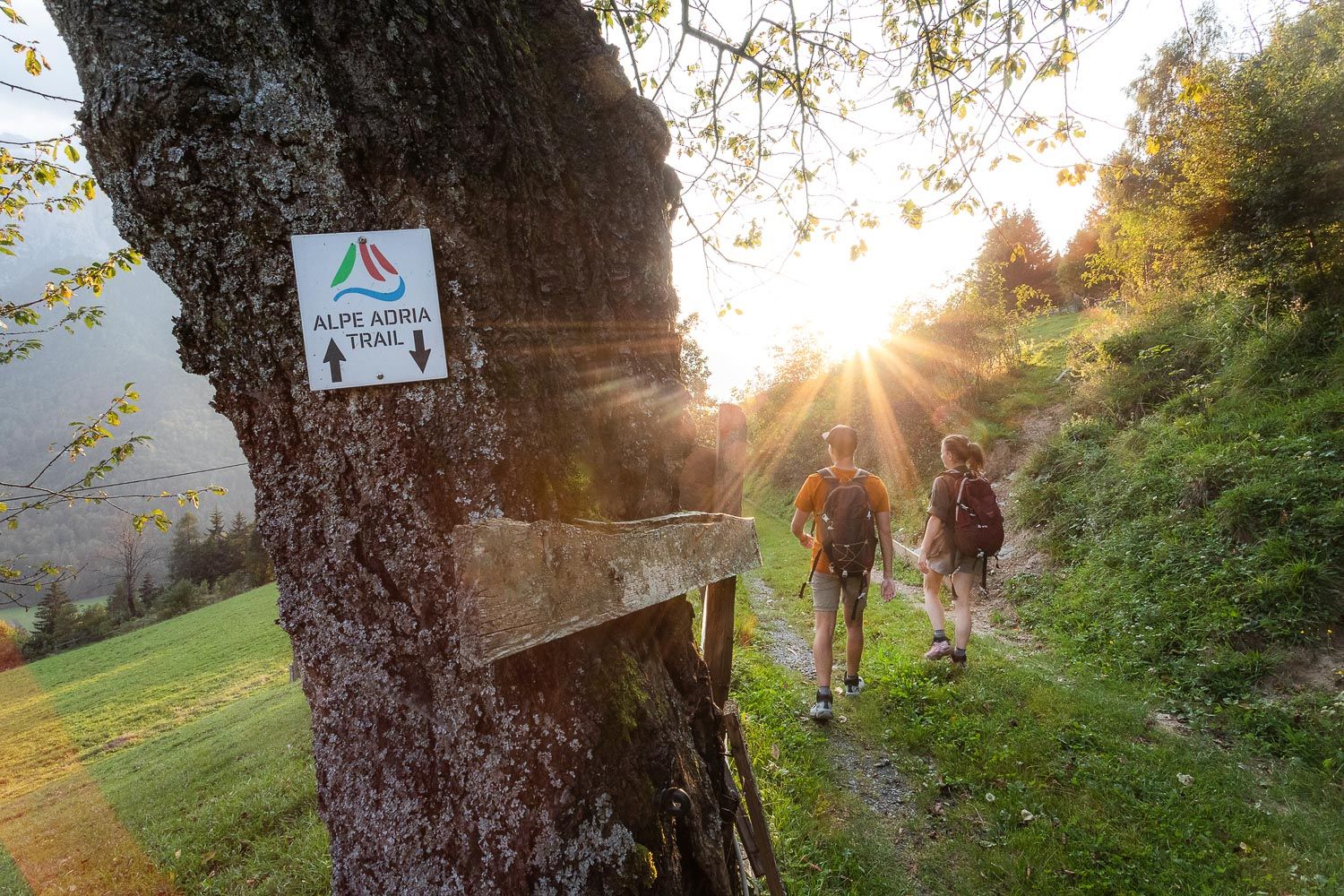 Hiking through the Garden of Eden 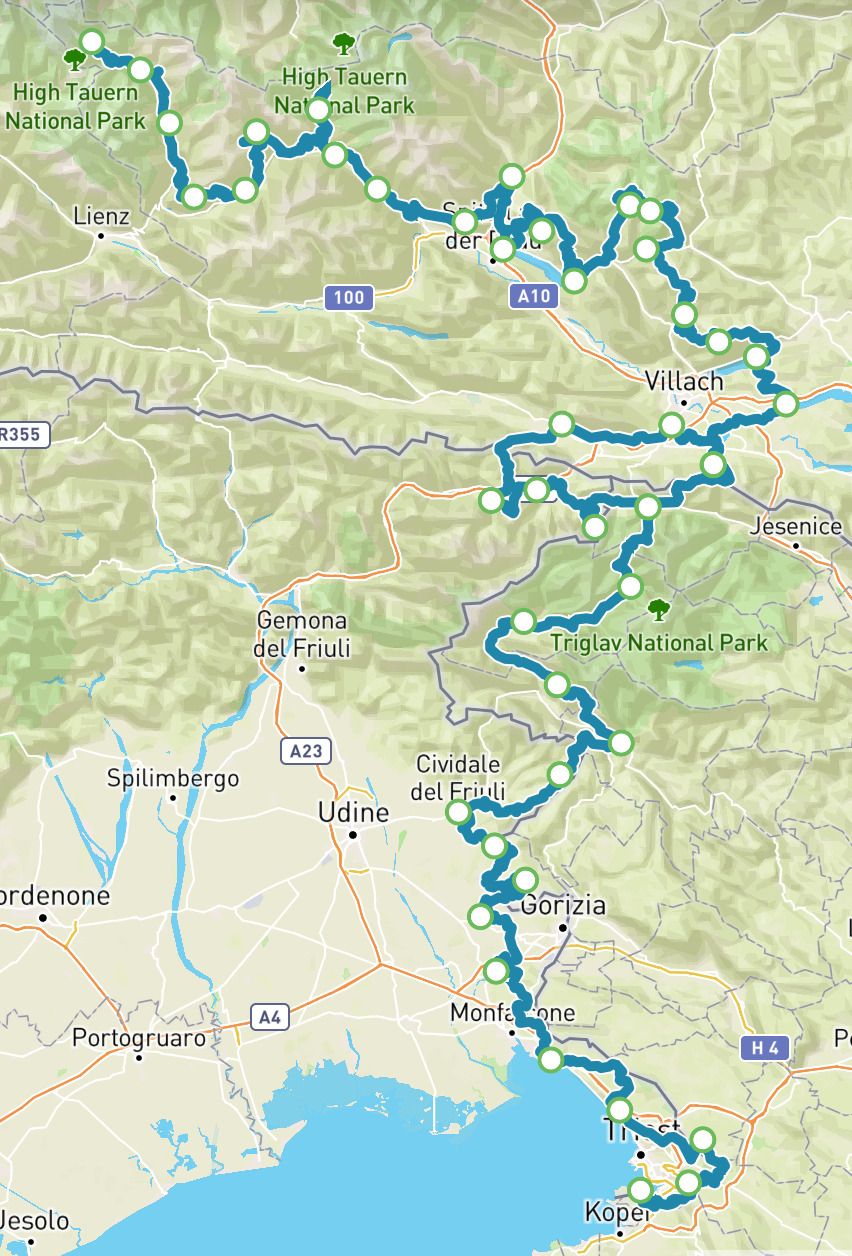 The Alpe Adria Trail is an approximately 750 km long hiking trail from the foot of the Großglockner in Carinthia (Austria) via Kranjska Gora (Slovenia) to Muggia in Friuli-Venezia Giulia on the Adriatic coast of Italy.

The Alpe Adria Trail was not designed as a sporting trail, but primarily as a cultural trail. The 43 stages are usually around 17 km long and can be hiked in 6 hours. Many trails lead from place to place in the non-alpine area along paths steeped in history. At the end of each stage there are usually several places to stop for refreshments and overnight stays.

6 stages of the trail lead through Slovenia. From Kranjska Gora, you cross the Triglav National Park in the Julian Alps, follow the course of the Soča River to the vineyards of Brda, also known as ‘Slovenian Tuscany’, until you reach the border with Italy on old military trails near Tolmin.

For more info about the trail, stages, accommodation, and the luggage service, check out the website: 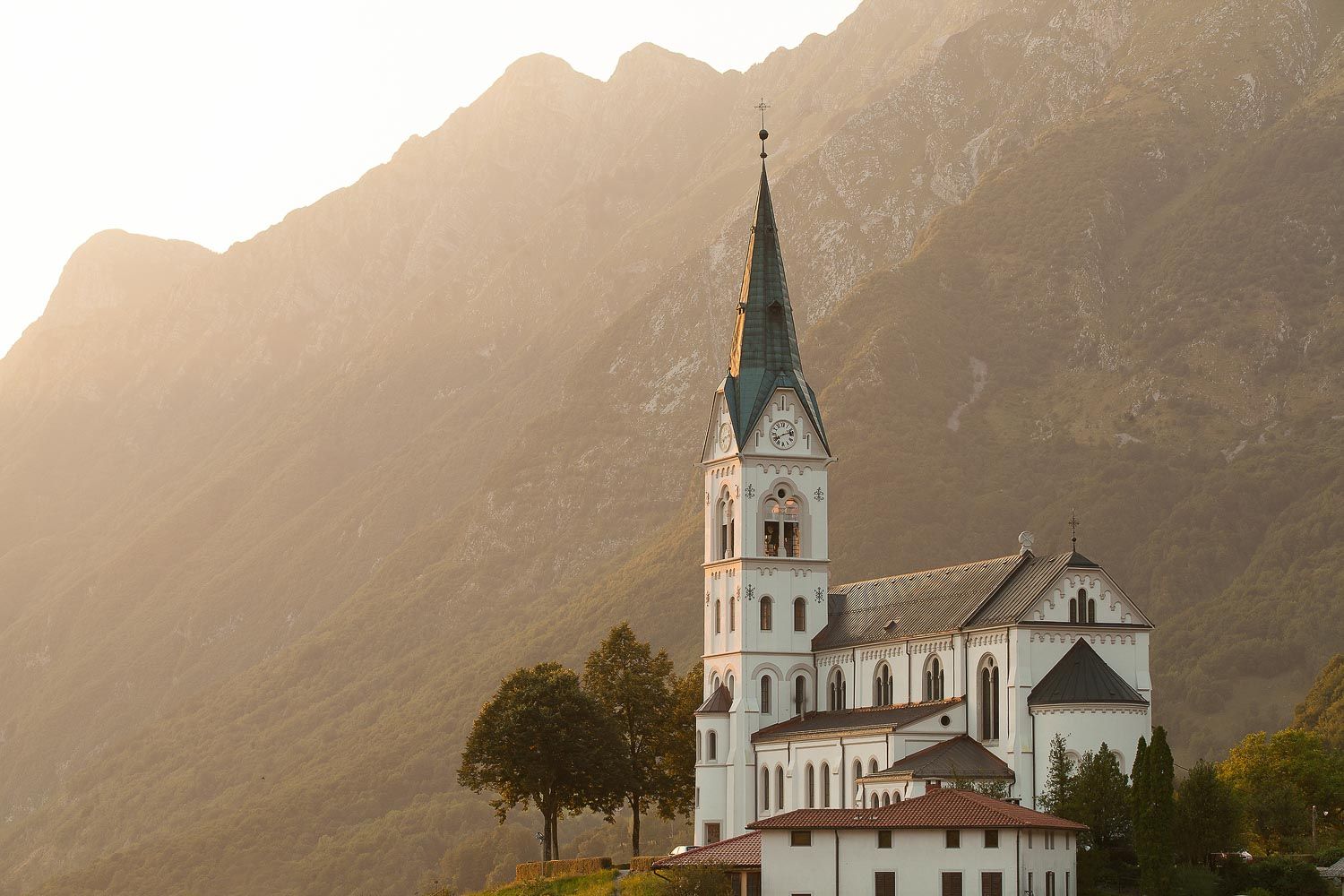 A typical feature of karst mountains is that there is not a drop of water to be found. In the valley, on the other hand, it literally sprays out from the walls, as does the source of the Soča River. Pure, ice cold water bubbles out from between the rocks on the way to the Adriatic. Before the river reaches the sea however, it carves out these stunning canyons from the soft rock, where the emerald green waters transform into a Class IV wild-water course.

It is only a short walk to the Mlinarica waterfall. Although it’s peak season I have the waterfall all to myself. A little further along a path runs along the Soča, which is especially deeply cut out here, no less than five meters deep, yet I could still jump from one side to the other. There are signs that others have done this before me, but I manage to control myself. 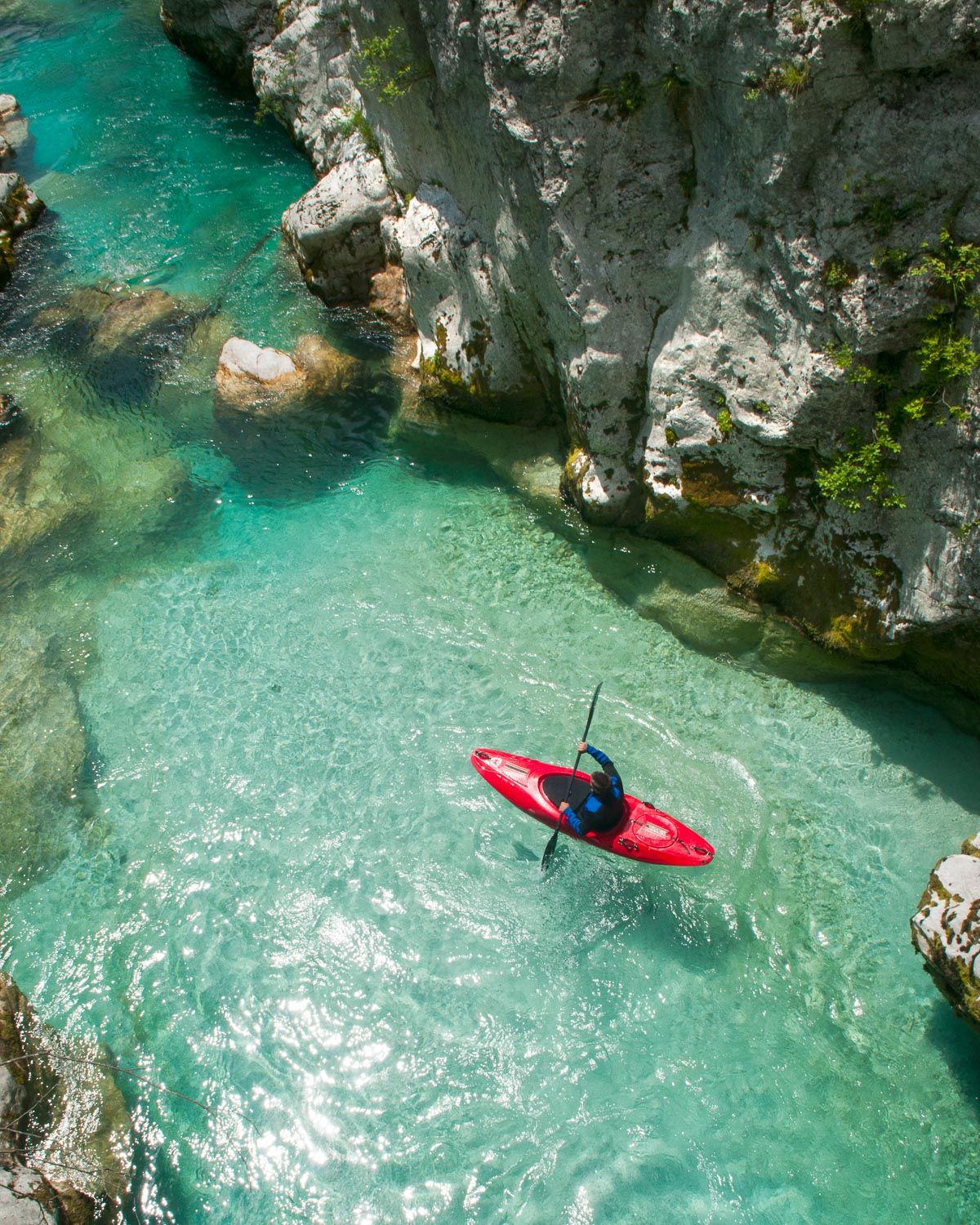 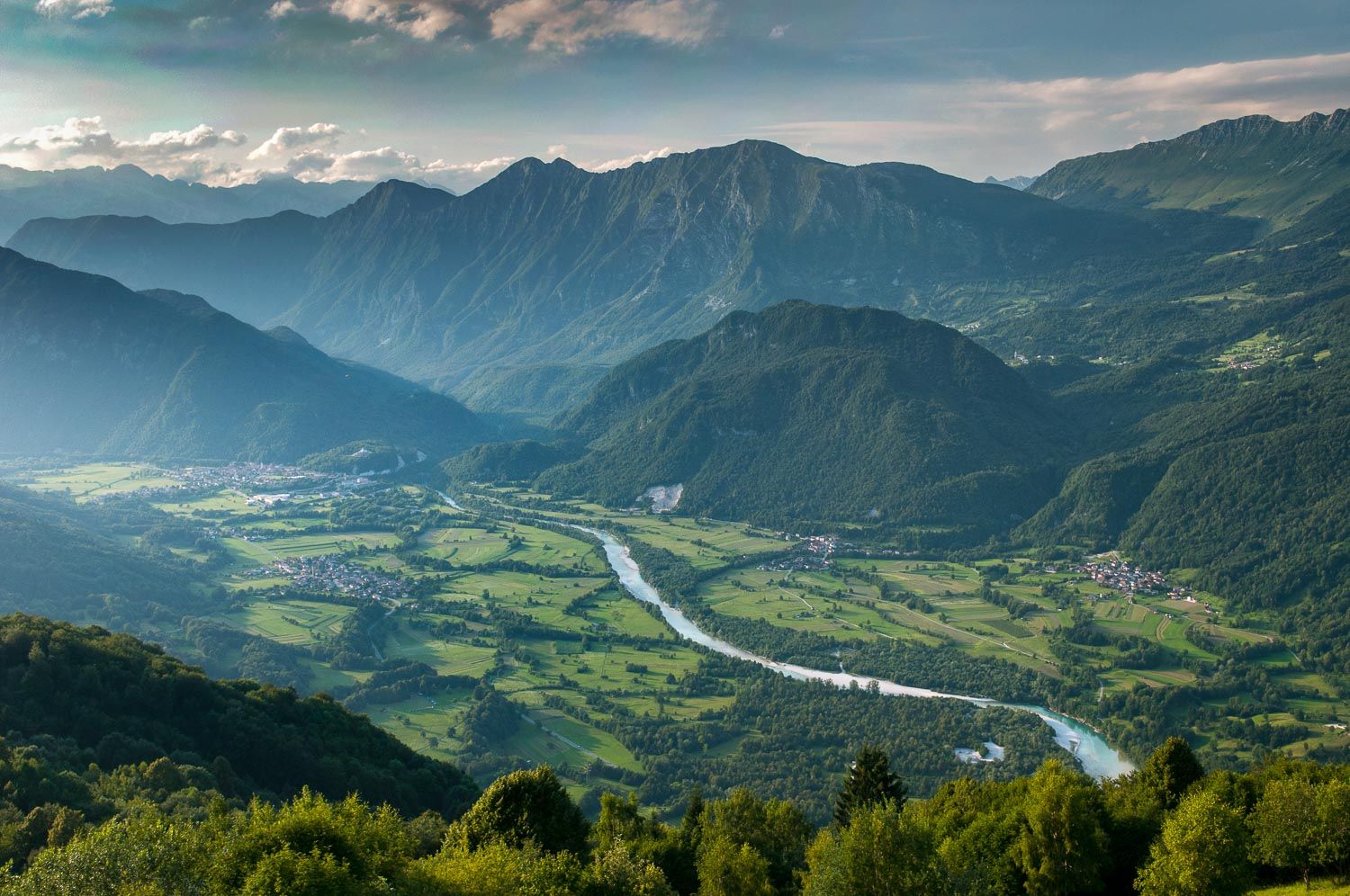 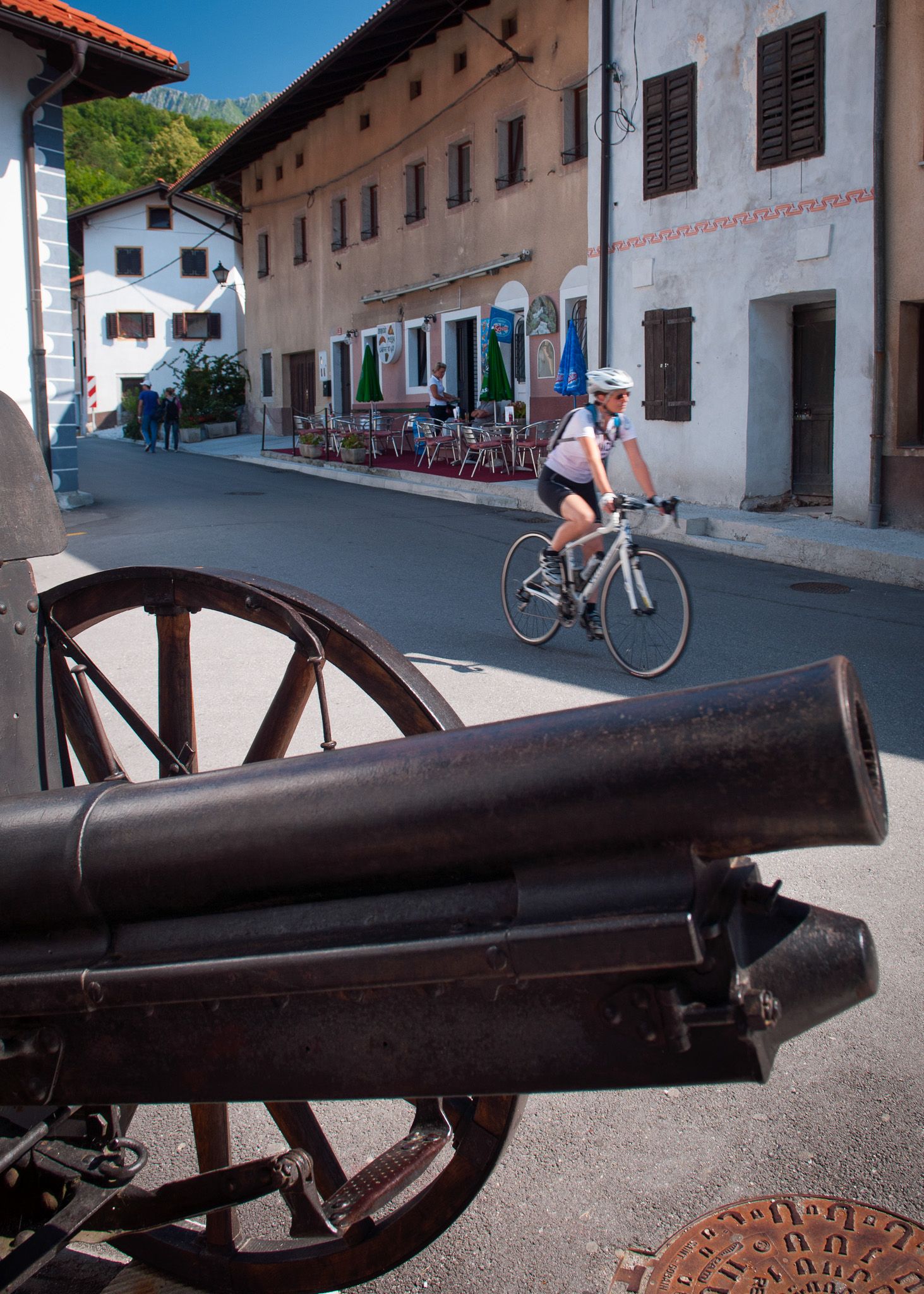 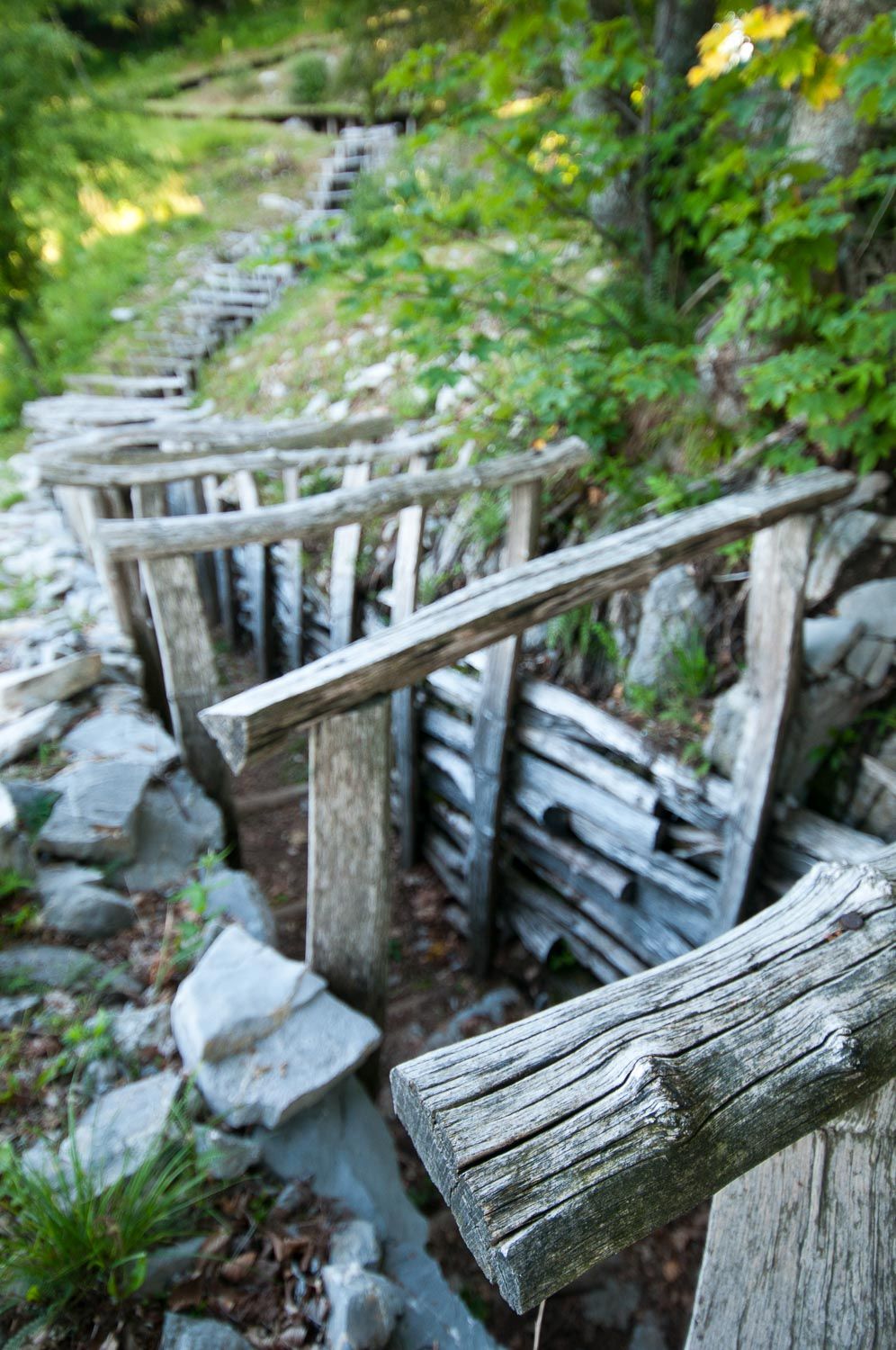 TRAGEDY ON THE ISONZO FRONT
Almost a hundred years ago, during the First World War, this area was the site of some of the bloodiest alpine battles ever fought between the Austro-Hungarian Empire and Italy. Over the course of three years, more than 800,000 soldiers were killed, and many traces of the war still remain in these mountains. At the war museum in Kobarid, the impressive exhibitions give me a good idea of the misery that these soldiers had to endure. I leave the museum deeply impressed, ignorant never again of the trench warfare here that was comparable to Verdun and Gallipoli in its intensity and number of casualties.

Over the course of three years, more than 800,000 soldiers were killed on the Isonzo front, and many traces of WWI still remain in these mountains

During the First World War, the Italians were very progressive. They laid roads in places you would never expect. Tactics dictate that those who control the higher ground have the upper hand over the opponent below them, and thus the Mangart Road was constructed. I really want to see the sunrise from the top of the Mangart, so before dawn I set off up the mountain in my car. The narrow road is barely the width of a car and there is a diversion for oncoming traffic. I wind up the mountain in my car through the mist, emerging just below the mountain pass. The view from here is phenomenal on clear days: to the east, you look out over the Julian Alps and to the west the Dolomites. There are more roads built by the military, but this is the only one that has been tarmacked and accessible to traffic. The rest is easily managed on foot.

The mountains around the Soča Valley are dotted various strategic points with bunkers, defensive positions, trenches and war graves. Some of the trenches in the higher altitudes of the battlefield are barely 30m from one another. For years, both sides tried to dig tunnels under the each other’s positions in order to blow up their enemy from below. The trenches at Kolovrat are easy to get to and have been restored to how they looked during the war. A beautifully colourful sea of flowers adorns the open field between the trees, but this scene was once very different. During the First World War, there were no trees and the landscape was a great sea of mud, dotted with bomb craters. The green ridges of Kolovrat look out over the Soča Valley and the Krn Mountains on the other side, where the Austro-Hungarian lines once stood.

The view from Kolovrat is perhaps the finest of the entire Alpe Adria Trail: not only does it offer a breathtaking view of the Julian Alps, it also offers a panoramic view over the route towards the Adriatic. From here a stage of the trail follows a section of the famous “Poti miru” (path of peace). It is here that one walks in the footsteps of a young German lieutenant named Rommel. Yes! The same guy who became famous as Fieldmarshall Rommel, from the Second World War battles in North Africa. 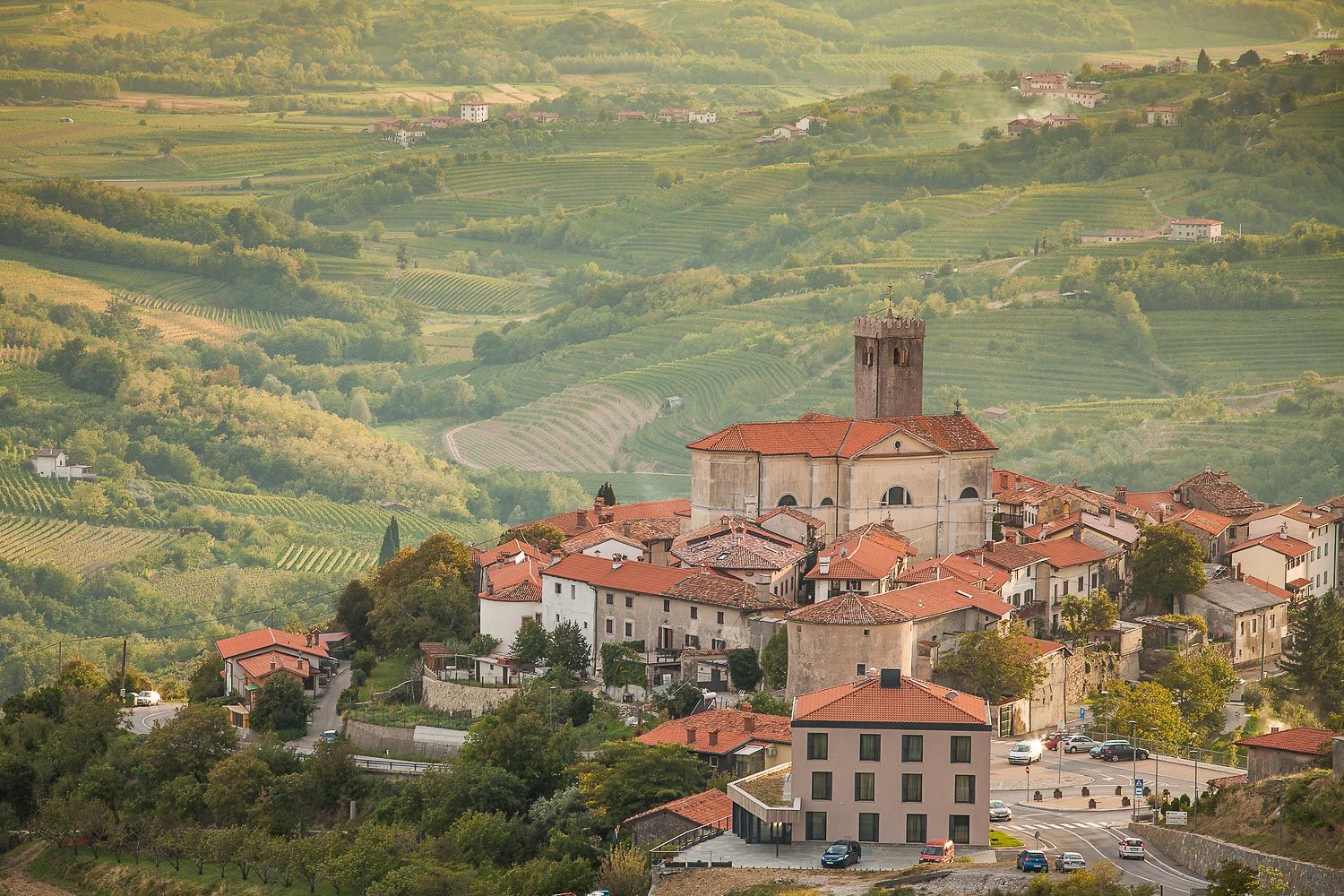 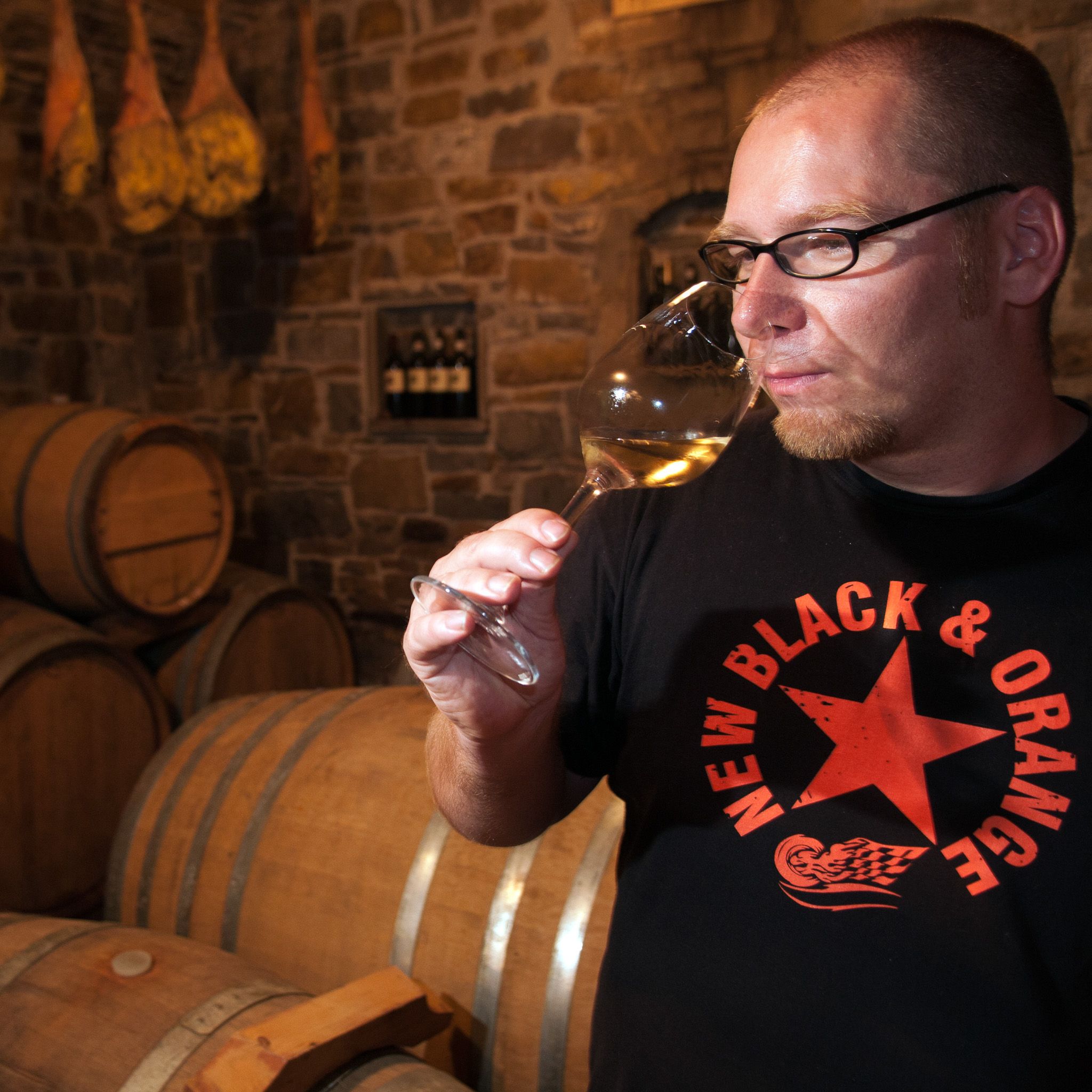 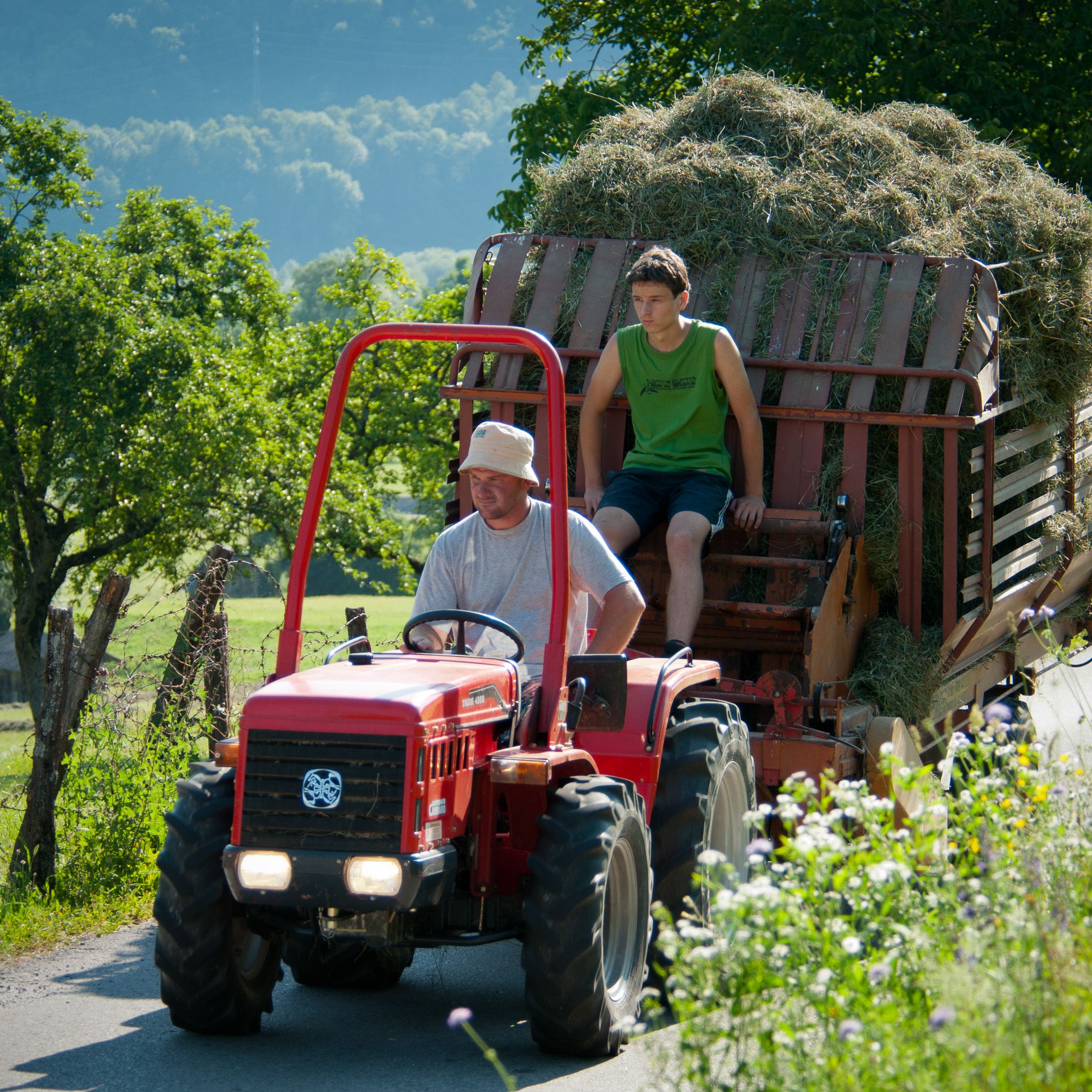 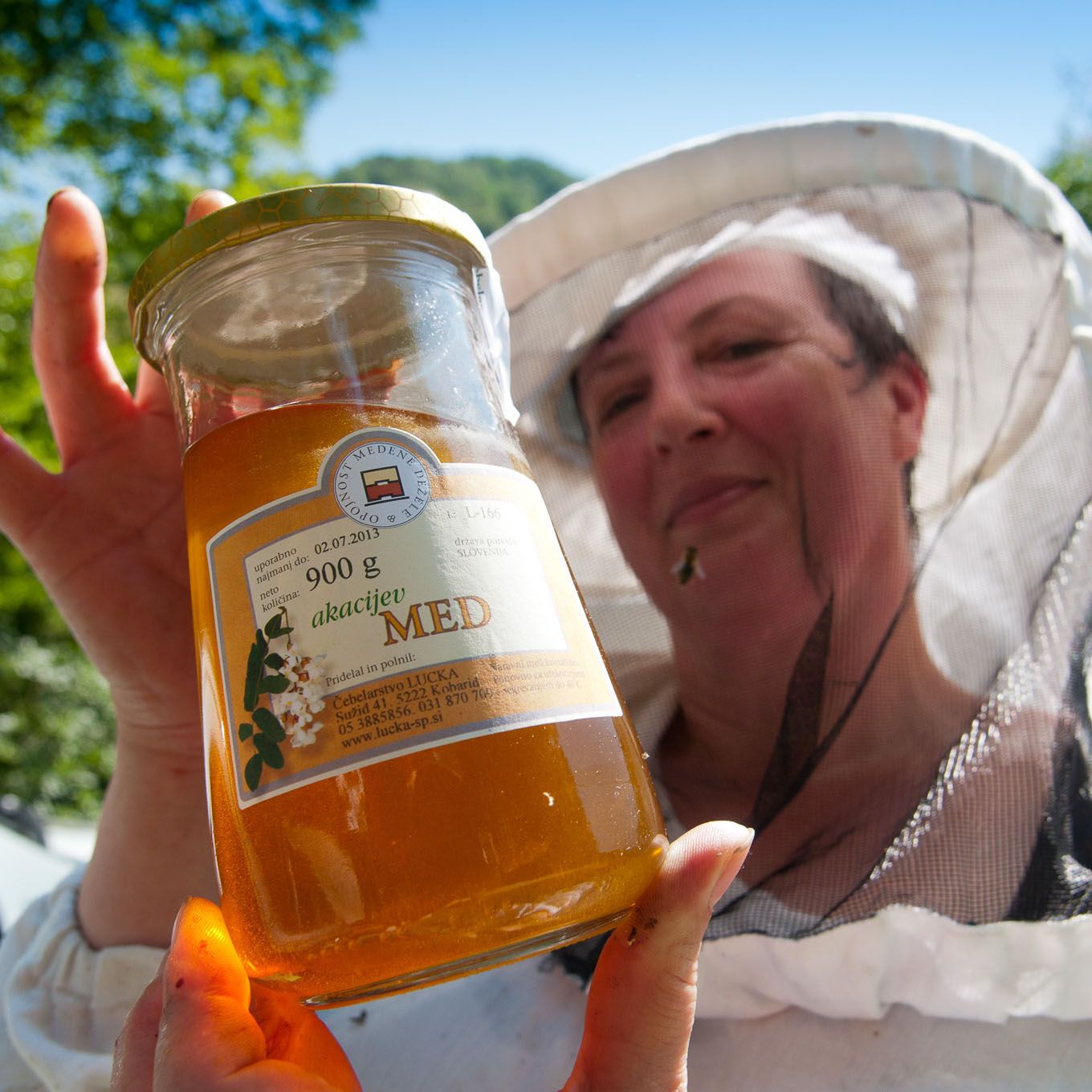 WALKING THROUGH THE GARDEN OF EDEN
It is the middle of summer and the farmers are haying their land. Entire families are raking the fields. I end up on Planina Bosca, an alpine pasture close to the Italian border and a favourite spot for paragliders. It’s far too early in the morning for me to be up there, but the goats and cows have long since been milked. Janko has just put the rennet in the warm milk. And is now churning through the curdling milk. He is the cheese maker for a collective of small farmers. Stirring separates the young cheese from the whey, and with a cheesecloth it is scooped out of the copper cauldron. There is nothing better than real mountain cheese with a glass of whey on the side.

As I continue my journey south,  the landscape slowly opens up and the steep mountains make way for glowing scenery. I leave the Soča and turn off in the direction of the Brda wine region, affectionately known amongst Slovenes as ‘Slovenian Tuscany’. With a little imagination, this name is appropriate. The road through the hills is surrounded by vineyards on both sides, with villages and churches dotted here and there.

The people of Slovenia are into honest food and like to grow everything themselves in their vegetable gardens, olive groves and orchards with fruit trees. Unsprayed and untreated, pure and authentic.

After a stop at the Ferdinant winery, a small, relatively young business that produces modern, award-winning wines, I descend towards Trieste, the Italian city which once formed part of the Austro-Hungarian Empire’s coastline. Goodbye prsjut… Welcome prosciutto! 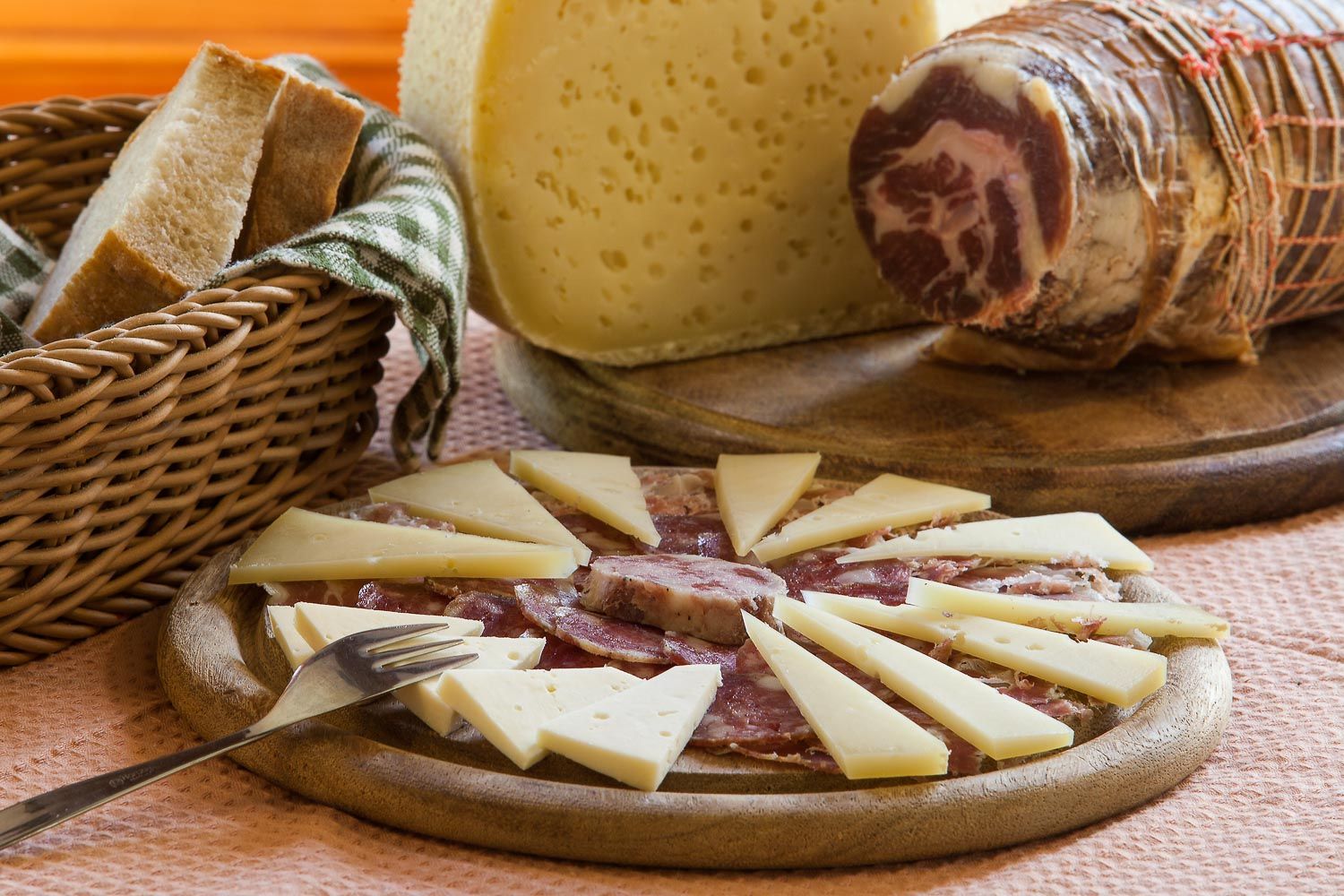 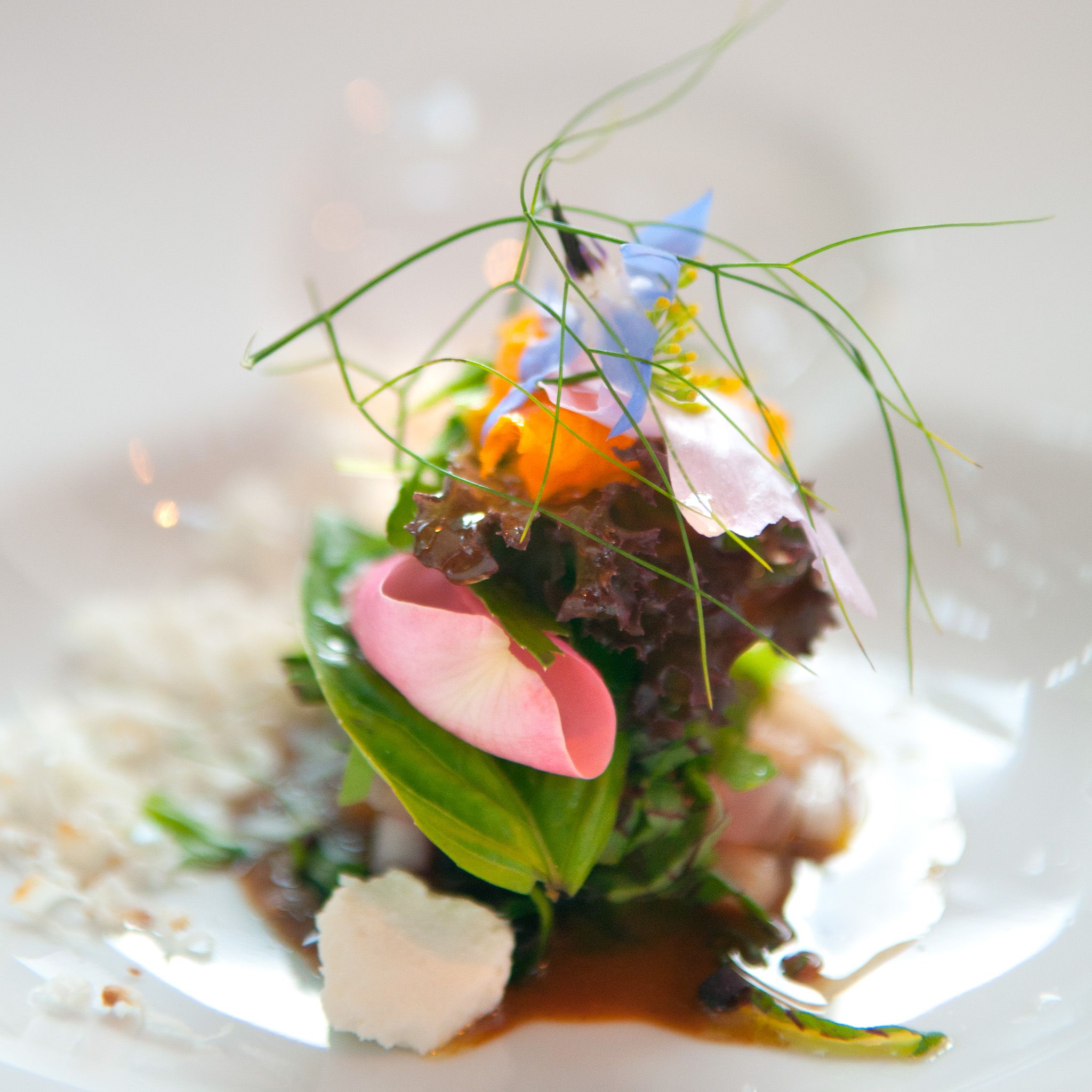 At Hisa Franko, in Kobarid, the world-famous chef Ana Ros holds sway. Ana is known for the TV series ‘Chef’s Table’ and serves fantastic culinary creations in an intimate home setting, which are a feast for both the eyes and the taste buds. Book in advance as reservations, in this restaurant with 2 Michelin stars, fill up quickly!

An essential component of this app is the detailed information that is provided for each stage: the course of the stages, attractions and establishments.

The tours/stages, including all tour details and relevant map sections, can be stored on a smartphone and can be accessed offline