A red desert with mountains looking like melting chocolate ice creams, ancient mysterious cities, a sea as dead as a doornail and a mystical Bible story on every street corner. That’s Jordan, pearl of the Mediterranean Middle East. 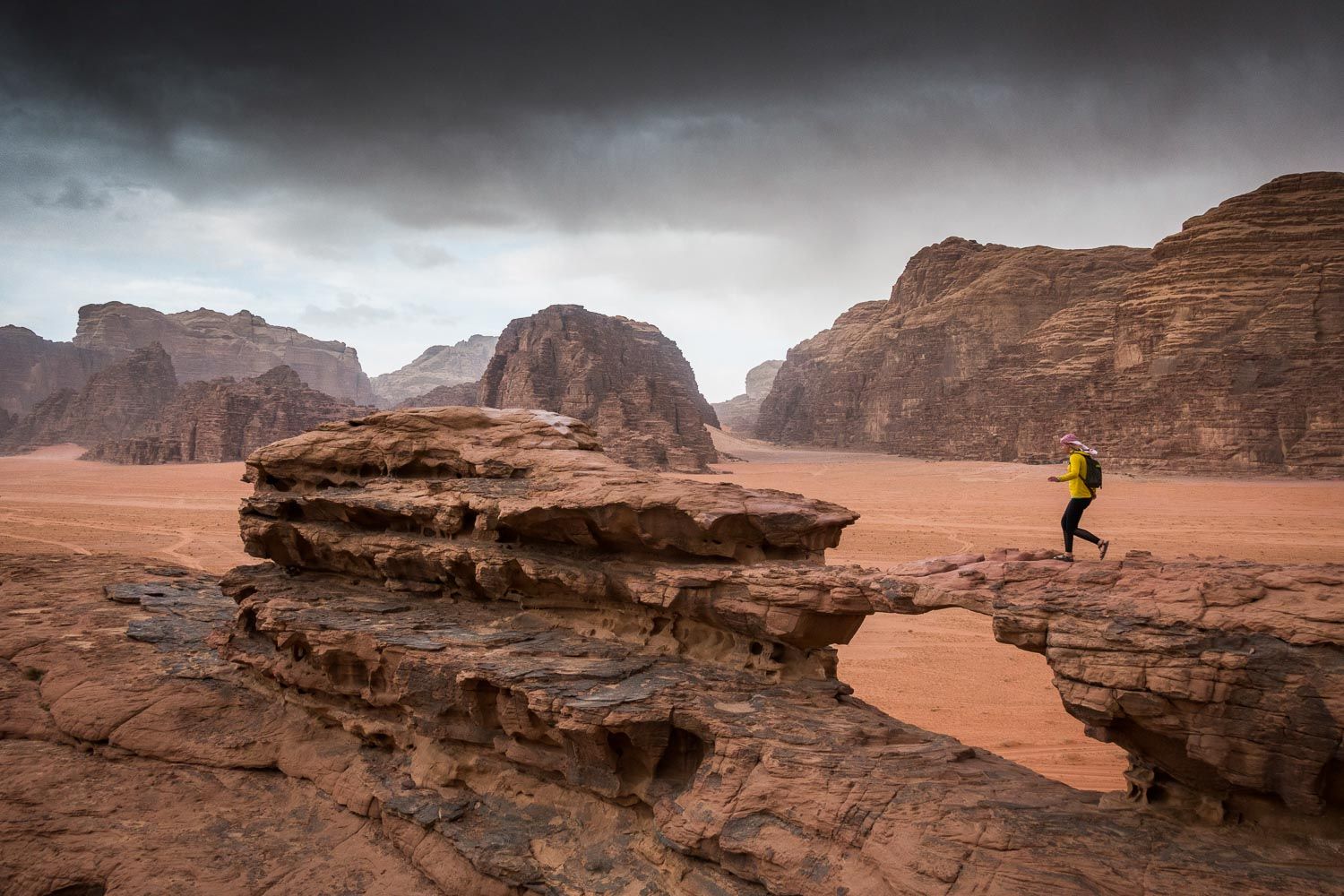 The clear desert sky filled with twinkling stars above Jordan’s Wadi Rum has turned into sand lashes, lit up brightly by the headlights of the parked jeeps. Hamad, one of our hosts, was right after all about the haboob (Arabic for dust storm) before bed. A tent flies through the light beams like a ghost into the darkness. It’s difficult to see. And to breathe. All my body cavities are filling up with this fine desert dust. Luckily, I have goggles lying next to my pillow. I found them earlier this week while diving at the bottom of the Red Sea. Practical.

I wrap my keffiyeh, the Jordanian red-white scarf, around my head, covering my mouth and nose, and put on my goggles. This way, I’m protected against the sandstorm. I quickly get up to help others in the camp to save what can be saved.

THE RED PLANET
Wadi Rum lives up to its name. It means “Valley of Airborne Sand.” It looks like an enormous red beach where towering sandstone and granite rock formations have been tossed around haphazardly. Pustules resemble melting chocolate ice cream or dragons or a gorilla, depending on how the rocks have eroded and how big your fantasy is. This place could be the desert where Jesus stumbled for 40 days and nights without food or water. Besides thirst and hunger, there was the heat: It is sizzling hot here, with temperatures well over 100 degrees. I’m not surprised it gave him visions.

Since 2011, this area has been on the UNESCO World Heritage Sites list, mainly because of the ancient rock drawings and a temple left here by the Nabataeans, a tribe living here in the Middle East during the classical era. The film industry is rather fond of this unique piece of the planet. Because the sand is red and almost surreal, Wadi Rum is cast regularly as the red planet. Mission to Mars, Red Planet, The Last Days on Mars, and The Martian were all filmed here. For The Martian, they even installed an entire road, lanterns and all. The Bedouin are happy to drive through it in their SUVs. 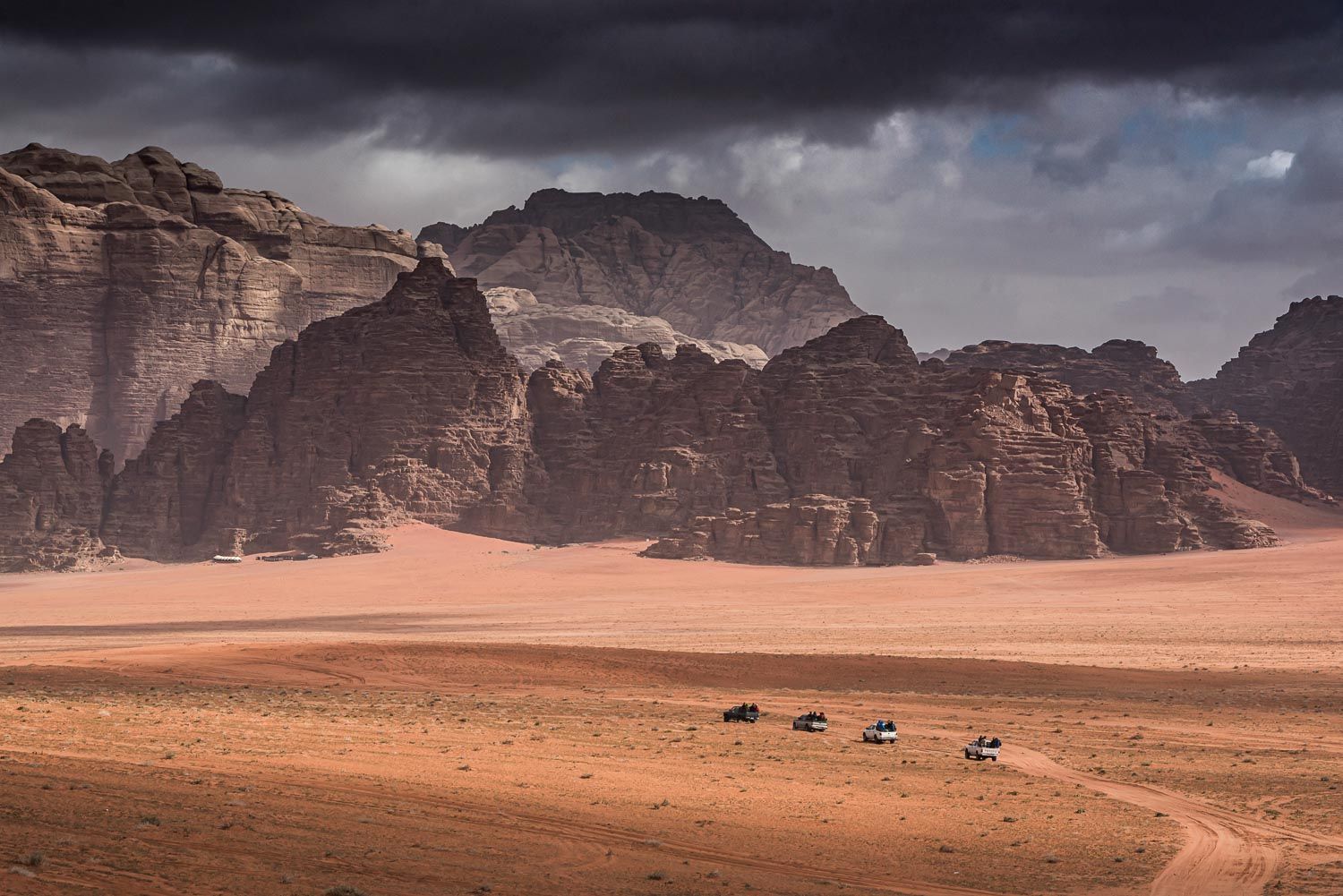 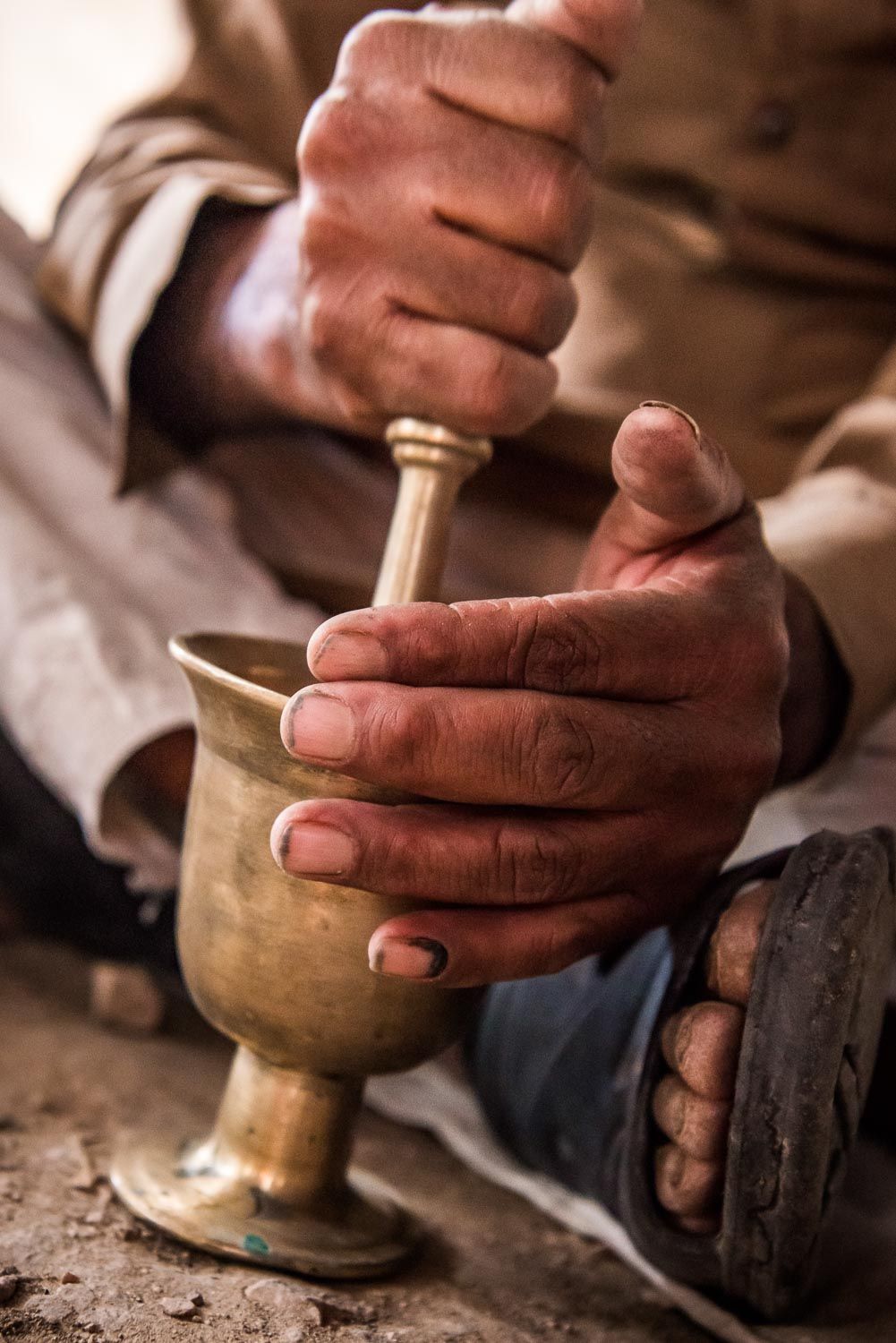 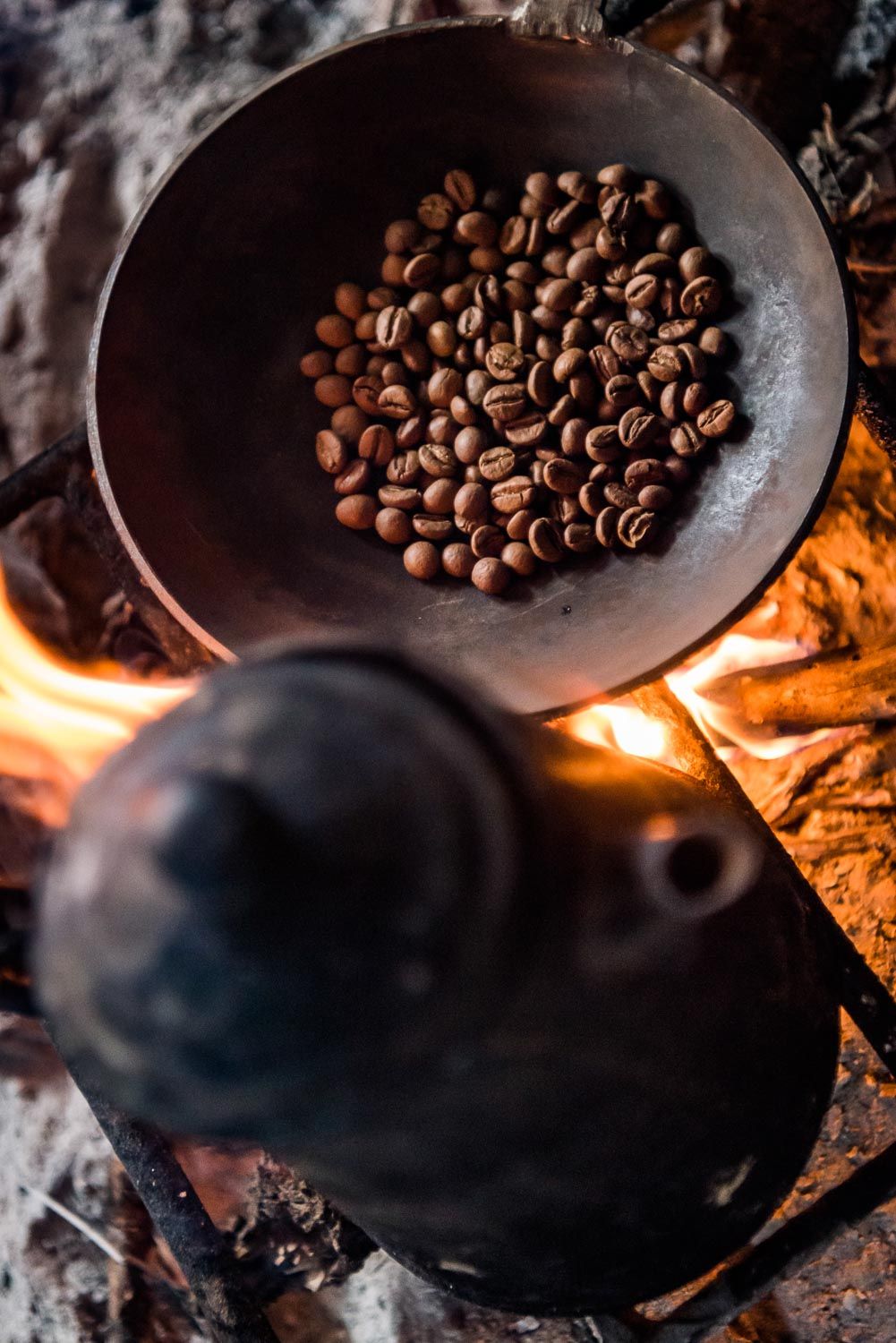 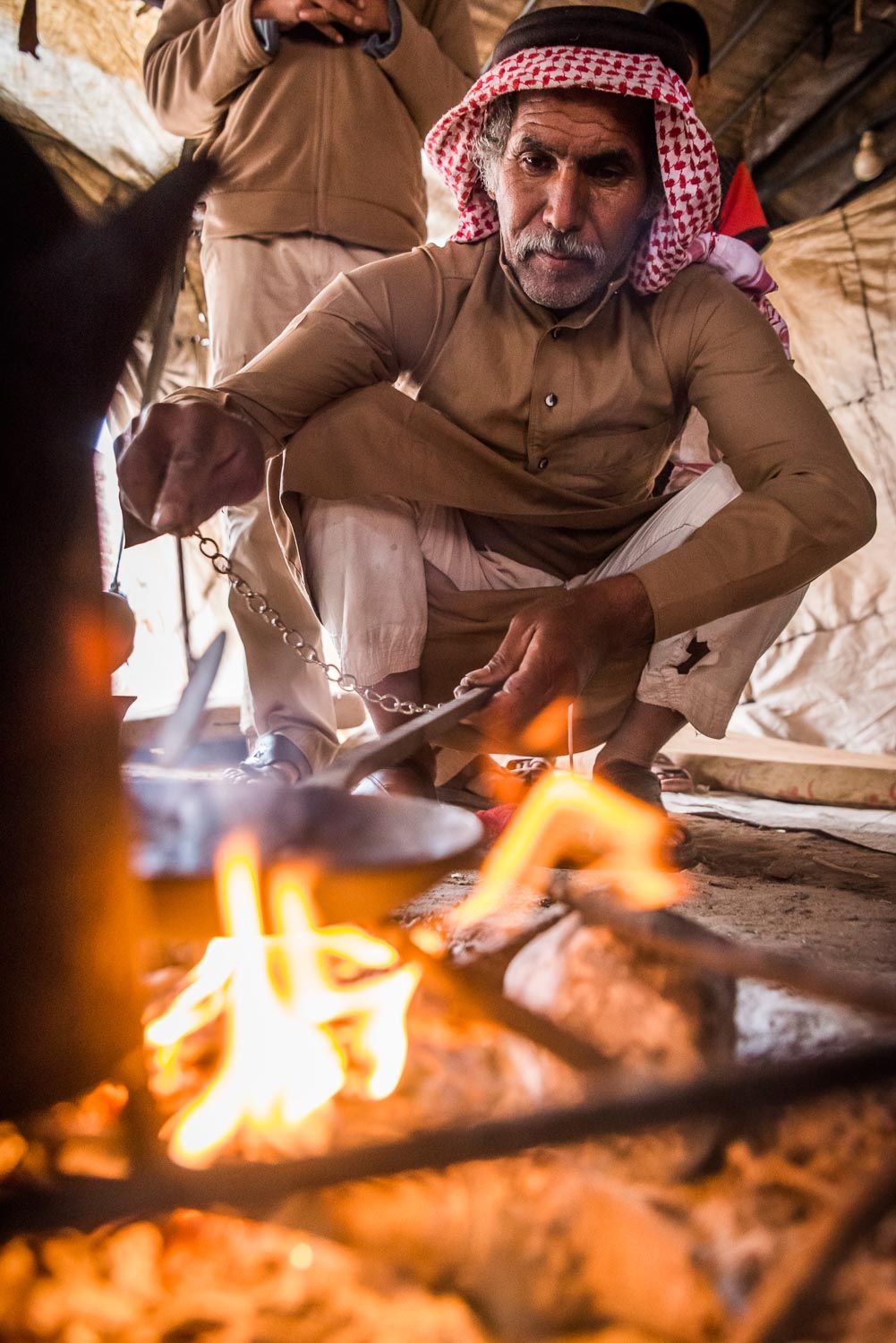 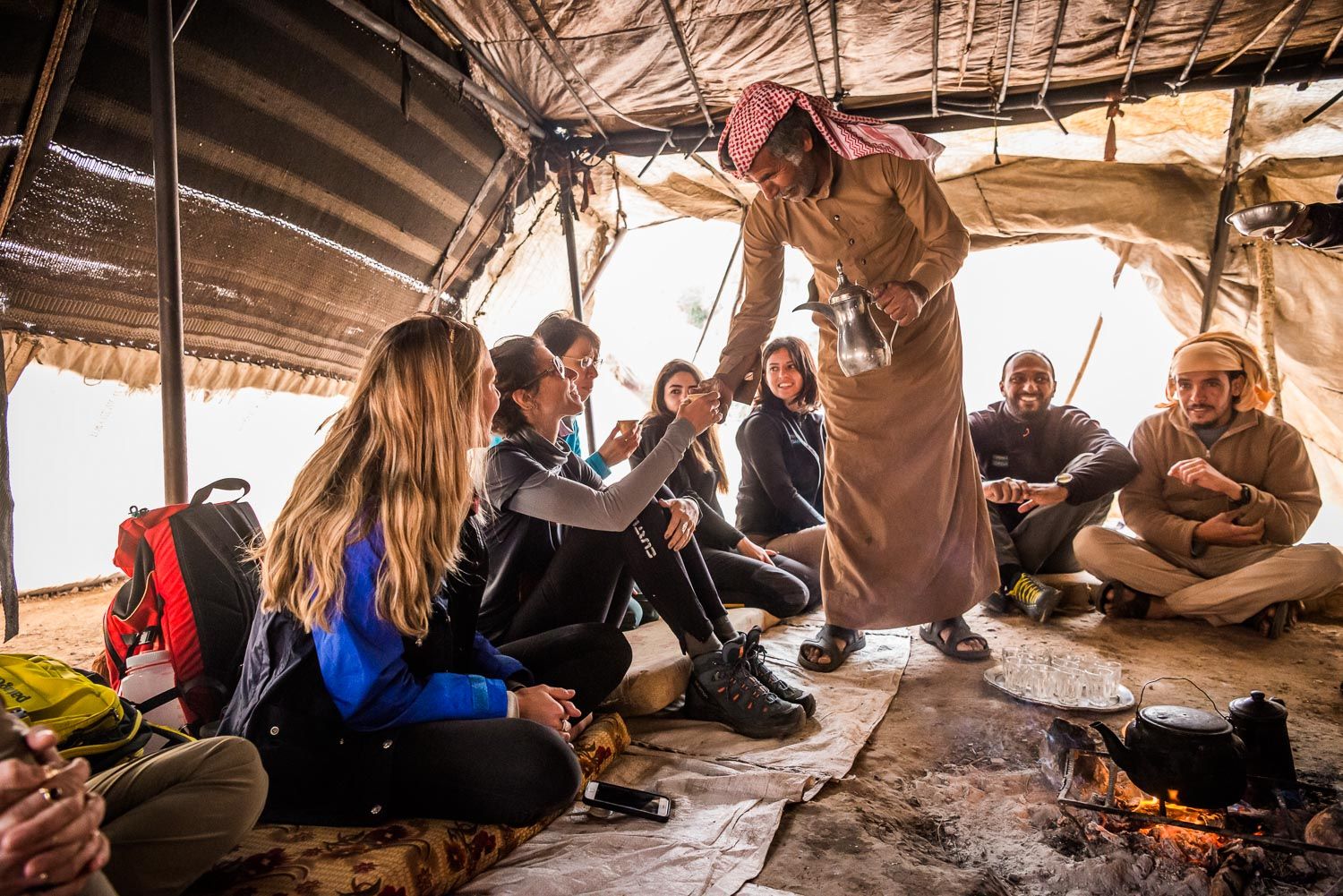 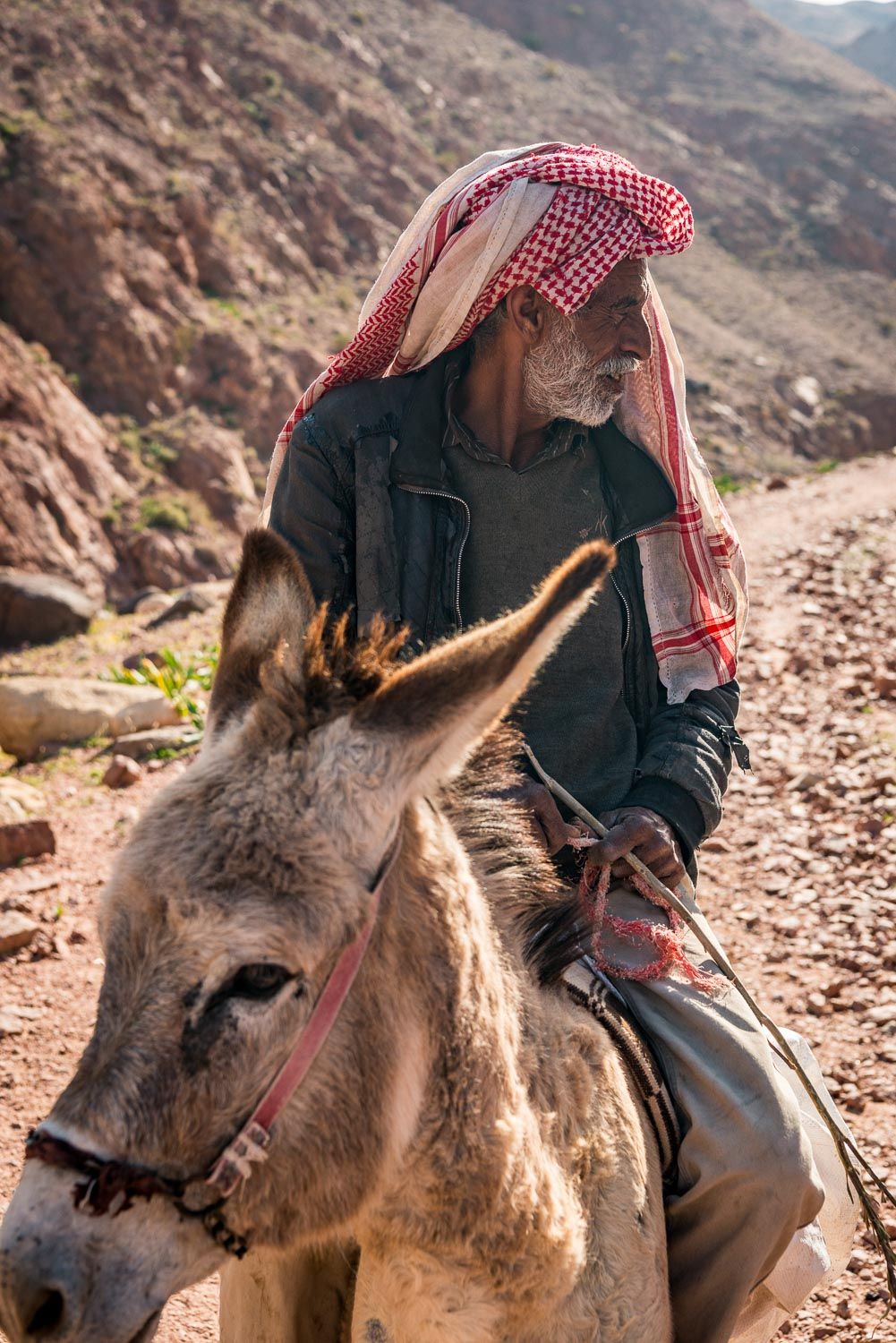 COFFEE WITH CARDAMOM
I squat down on a beautiful carpet in Abu Yussuf’s Bedouin camp. Literally, his name means “father of Yussuf” because male Bedouins get the name of their eldest son as soon as they become a father, and Abu Yussuf’s eldest son is called…Yussuf.
Abu Yussuf starts a fire from the branches his sons collected for him. He is seated on his knees in his dark, tailor-cut jalabiyyeh, the traditional attire for Jordan men. The smell of the coffee and cardamom, the brew boiling in a blackened pot, fills the desert air.

Coffee in Jordan is never just a quick cup; it is a sacred ritual in the Bedouin culture. Wars have been fought over a cup of coffee, marriages arranged, and relationships cemented. Abu Yussuf pours a cup for himself first to test if the coffee is hot enough. You shouldn’t be able to drink it all in one go—that would mean Abu Yussuf didn’t put enough effort into it and is pouring cold coffee. A deadly sin.
“The cup should always be in your right hand,” Abu Yussuf says as he starts to explain the local coffee etiquette. The left is used only for other matters, like going to the bathroom. Using your right-hand doesn’t apply just to food in Jordan, but it is very important for coffee rituals.

Wars have been fought over a cup of coffee, marriages arranged, and relationships cemented

Also, you shouldn’t blow your coffee cool. You swirl it around in your cup until it’s drinkable, then drink it in three sips. Not more, not less. Did you have enough coffee? Swing your cup back and forth, showing you’ve had enough. Do you want an extra shot? Lift your cup. But no more than three times, because that would be rude.
And being rude is not good. Before you realize it, you will unleash a tribal war in Al-Mamlakah al-Oerdoennijjah al-Hasji-mijjah, or the Hashemite Kingdom of Jordan, as the country’s official name goes. Only kidding: The Bedouins are known for their friendliness and are incredibly hospitable. 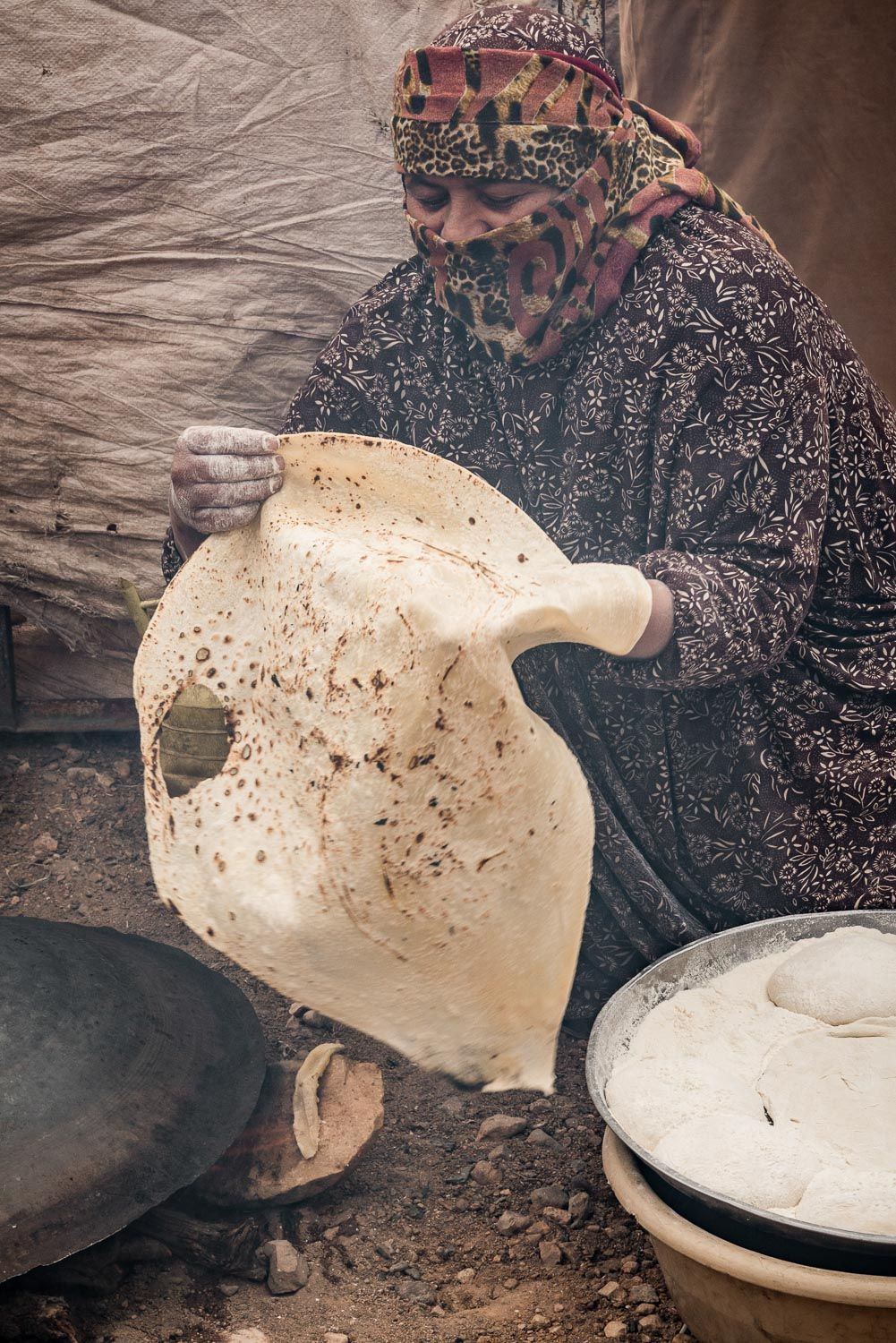 HOT AIR
By the way, it’s not only movies about Mars that are set in the desert of Wadi Rum. The Great Arab Revolt also took place here. The Arabs fought for independence from the Ottoman Empire during World War I. Their fight was fuelled by Lawrence of Arabia’s promises for an independent Arab empire. Unfortunately, independence never happened after the English and French governments divided the Arab world among themselves in the secret Sykes-Picot Agreement in 1916.

The Arab leaders felt betrayed, and they were. Many contemporary problems in the Middle East go back to the consequences of T.E. Lawrence’s broken promise, something unforgivable in the tradition of the desert tribes. During this trip you will see most of the highlights and sights of Jordan, from the north to the south. You will learn a lot about the ancient history of the region, experience the life of the Bedouins and meet the locals. This tour is guided by a knowledgeable tour guide with extensive knowledge of Jordan’s history and culture. Are you a free-spirited traveler? Then this program is for you! Ideal for both individuals and families. Your rental car and hotel reservations will be made for you. We provide you with a suggested program, but it is entirely up to you whether to follow it or create your plans! The Fly & Drive program offers the best of a private tour with the flexibility of independent travel. 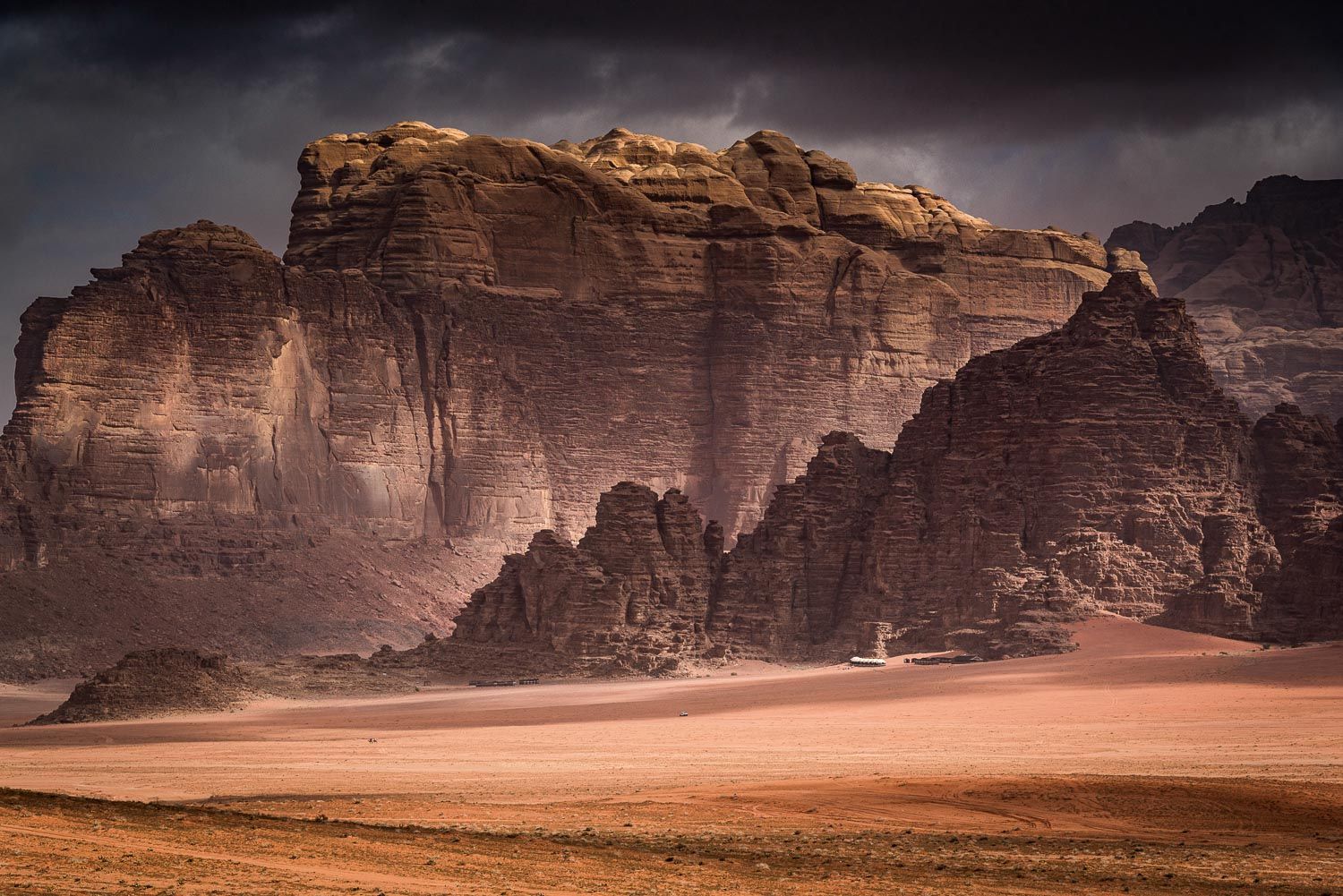 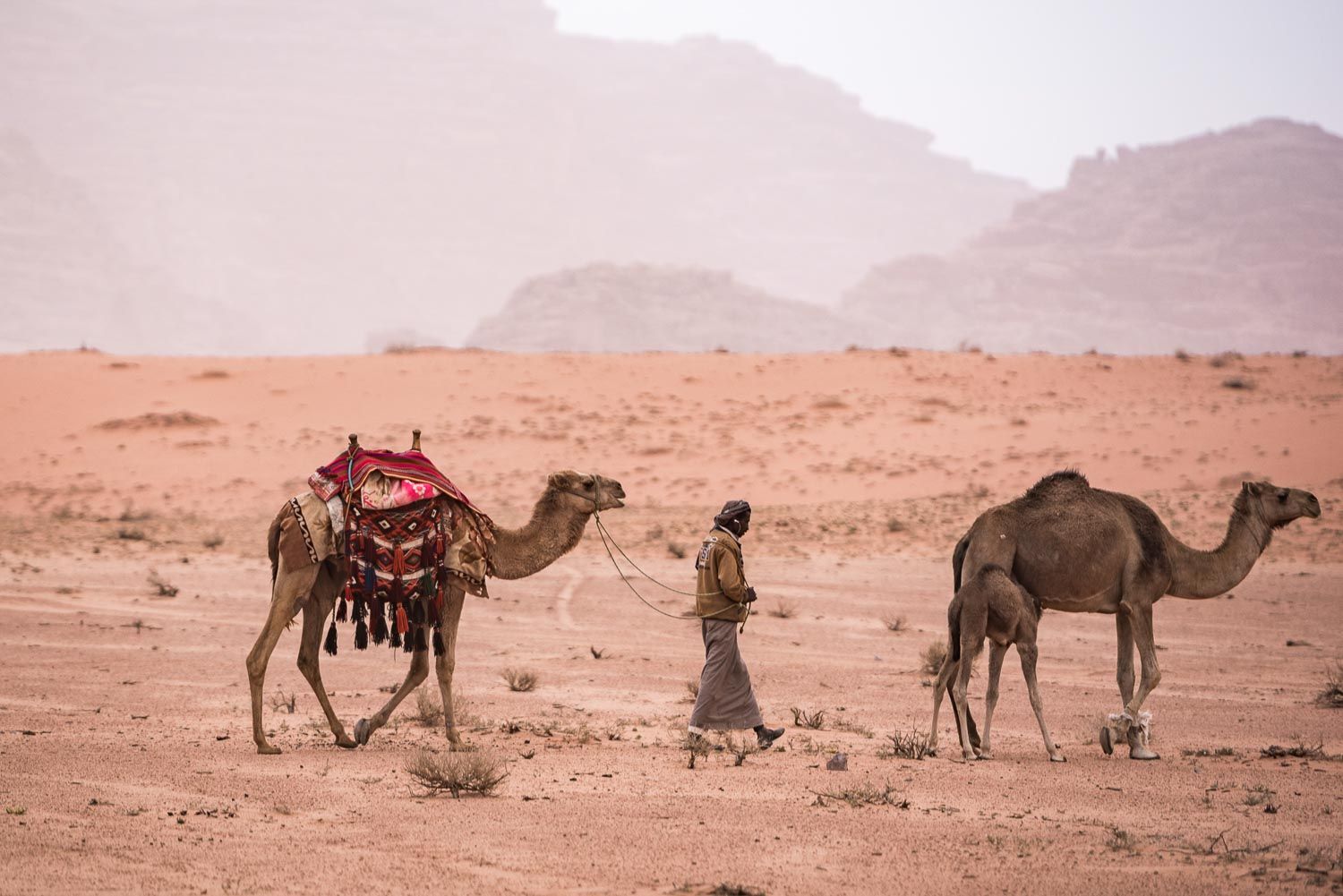 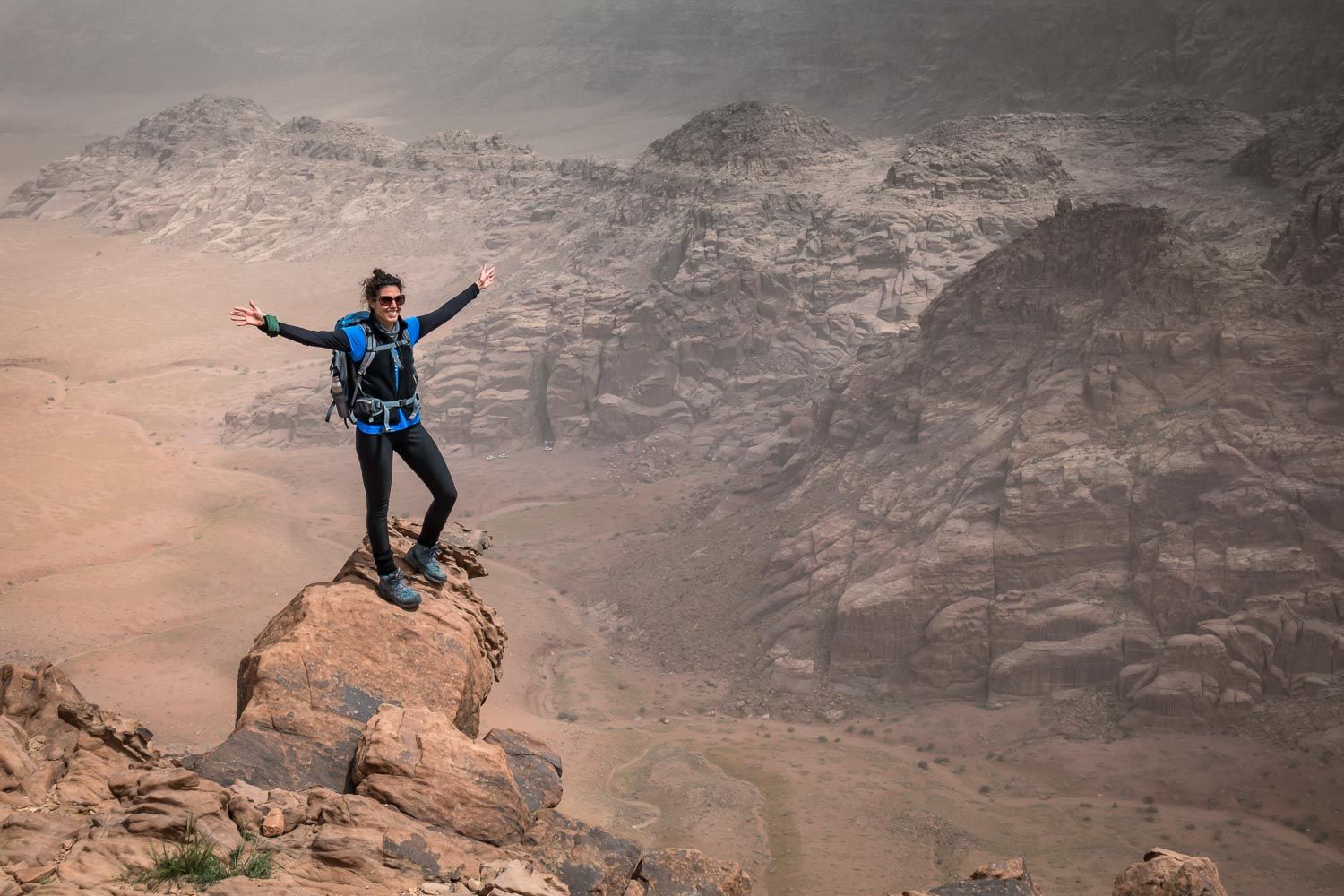 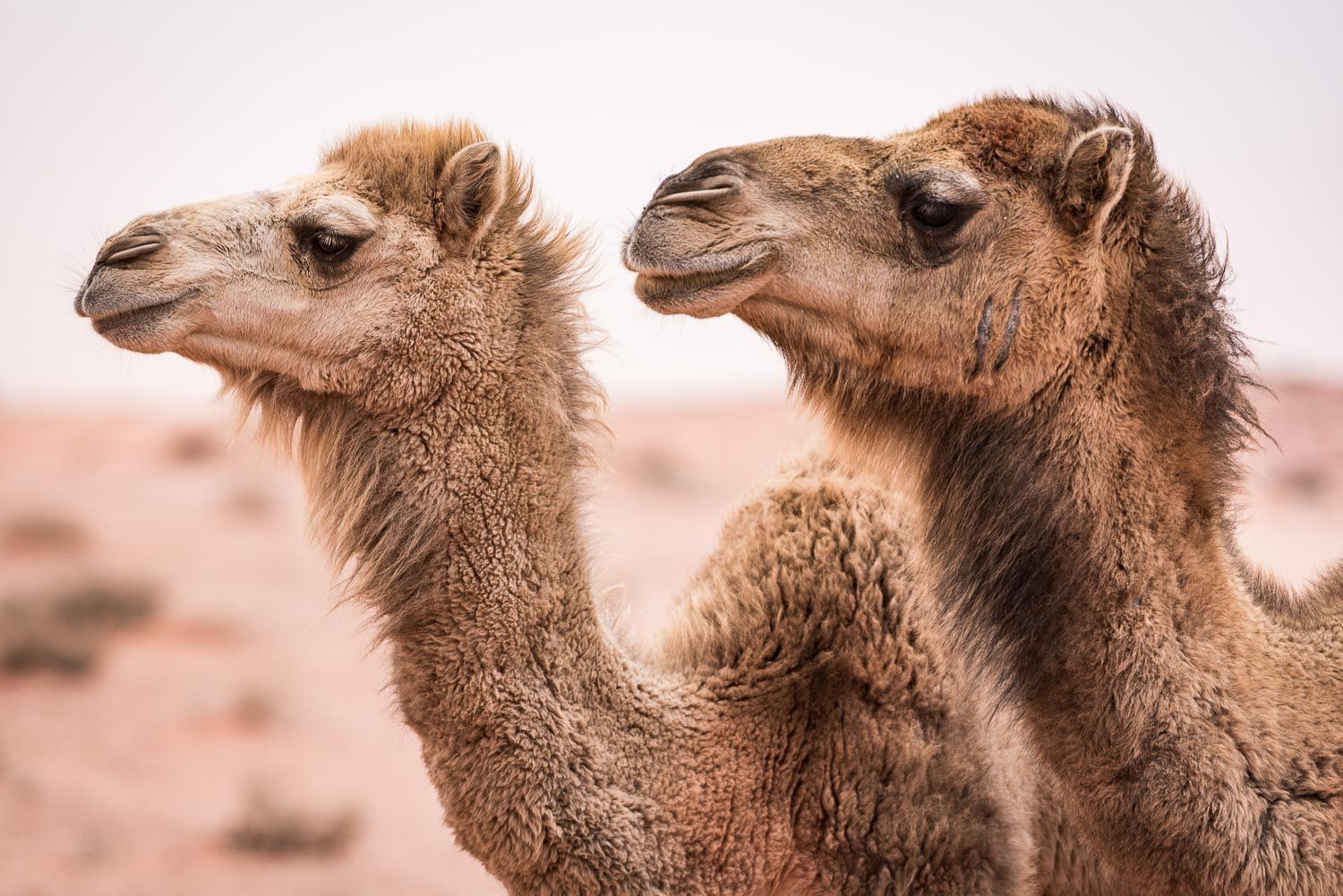 BIBLE STORIES
Jordan became independent on March 1, 1946. But the documented history of the country goes way back. When traveling through Jordan, the biblical stories are impossible to miss.

Here’s a short anthology of the biblical history of Jordan: The place where Jesus was baptized is less than 2 kilometers (1.2 miles) from the Jordan River. This place is also known as “Bethany Beyond the Jordan.” It’s where legend has it, Jesus was baptized by John the Baptist, who was decapitated a little farther away, in Mukawir.

“Then Moses climbed Mount Nebo from the plains of Moab to the top of Pisgah, across from Jericho. There the Lord showed him the whole land—from Gilead to Dan”

In Bethany, you will also find Tell el-Kharrar. According to the Bible, the prophet Elijah rose to heaven in a whirlwind from this hill, a grand show including chariots and horses of fire. On the edge of the Jordan Valley, you find Mount Nebo, the mountain where Moses showed the Israelites the promised land before he died. The capital Amman is called Ammon in the Scriptures, the capital of the kingdom of the Ammonites. On a mountain in this city, you will still find a proud citadel, which is said to have been built by King David.

The list of pilgrimage destinations is endless. It sometimes leaves me dizzy, all this history, biblical or not. But the historical awareness overwhelms. The cradle of our culture is right here, on these rocky grounds. 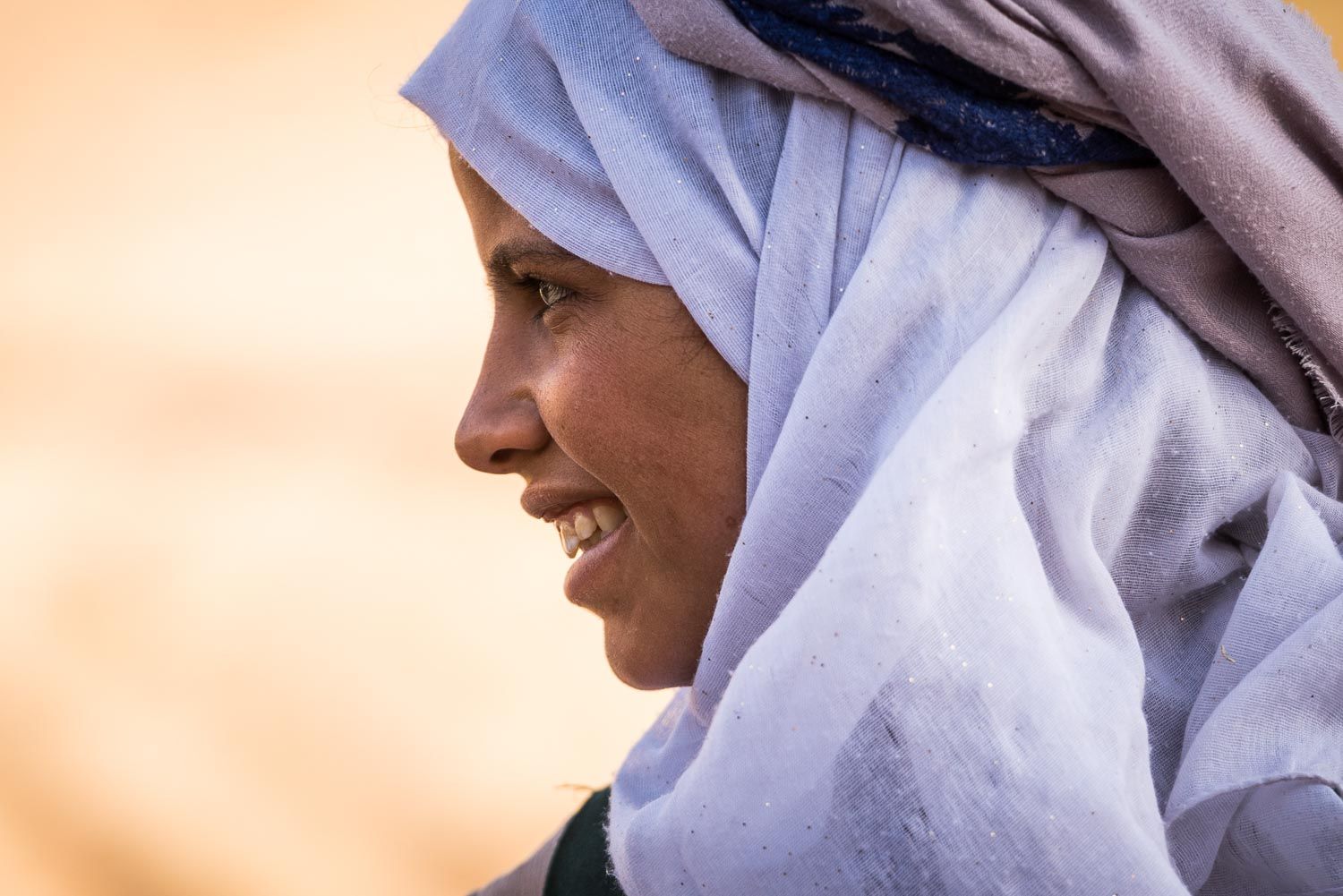 A HABOOB IS BREWING
A few days ago, I was completely unaware of the secrets of the Dead Sea. I couldn’t fathom the intensity of the sandstorms in Wadi Rum. The night before the big haboob, night falls on the Bedouin camp. The camp is right on the spot of the possible route of the Israelites’ exodus from Egypt, which Moses led.

The water pipe is bubbling slowly. The face of Hama Mohammed Nasser al-Zawaida (I can call him Hamad) lights up from the glowing coals and the campfire that is consuming the last pieces of wood in our camp in Wadi Rum. His keffiyeh is skillfully draped around his head. His snow-white jalabiyyeh stands out against the dark sky. It’s a mystery to me how they keep those garments so clean around here. But Jordan is full of magic.

Hamad practices his English and tries to teach me some Arabic. He points to the slowly dying fire. “Hariq,” Hamad says: fire. We sit next to each other in silence and look at the stars while we smoke the shisha and blow out the sweet-smelling vapor. It’s peaceful. Being with the Bedouins makes you feel the real Jordan.

Hamad looks at the sky and points to the distance. Haboob, he says. Bright sky, twinkling stars. I see nothing that points to a sandstorm. But the Bedouins read the sky and sand. Maybe he is right, I think, while I pull the blanket over my head. 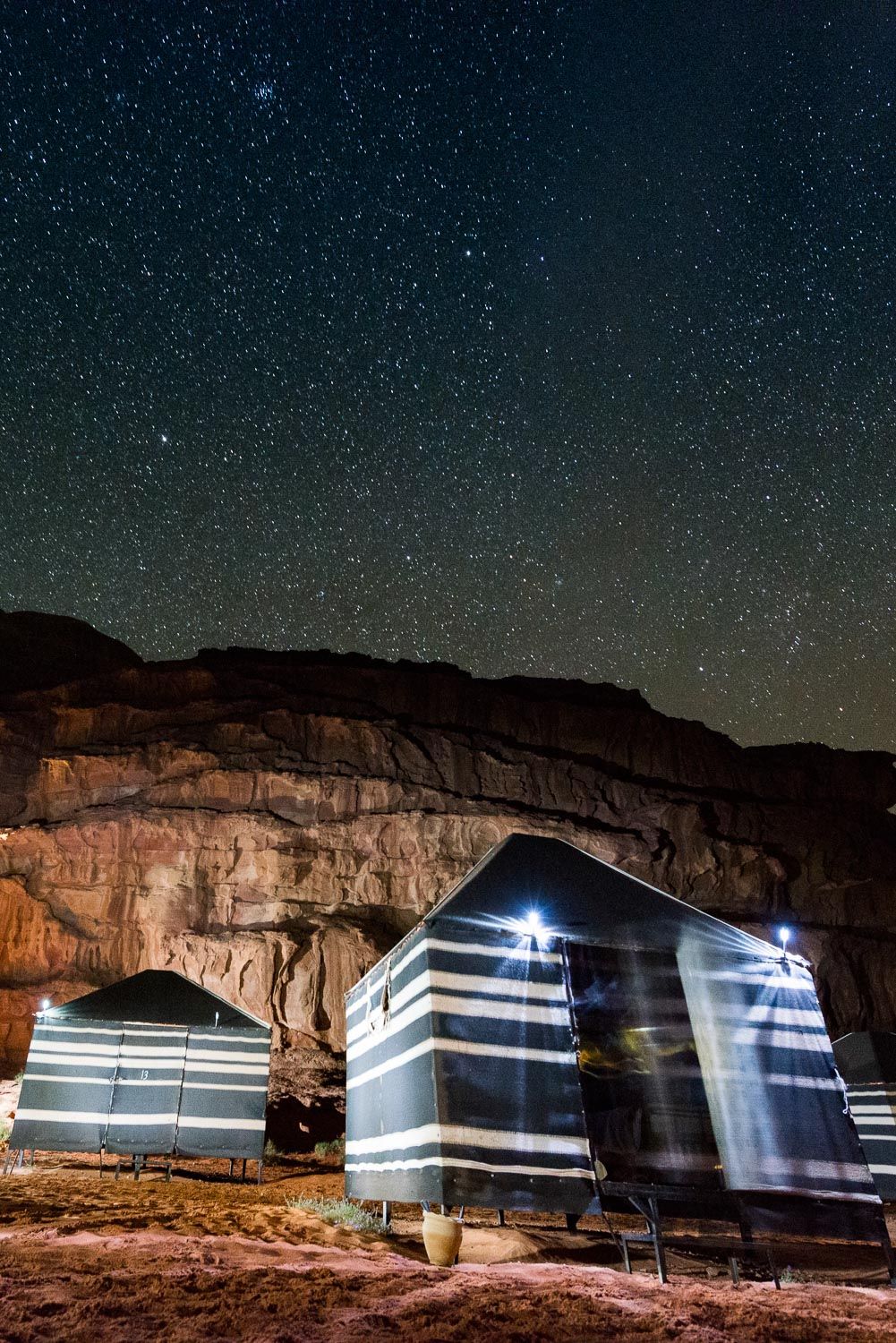