Off the coast of Split lies an archipelago that is home to olive growers, winemakers and fishermen. An archipelago with authentic villages and beautiful bays with crystal-clear water. Welcome to the islands of Šolta, Brač and Hvar.

One single road winds across Šolta, surrounded by just a few houses. It lacks a supermarket, it even lacks a village. On both sides, the asphalt kisses the Adriatic Sea, the beauty of the island. Šolta is blessed with bays of supernatural beauty.

A sailing boat and a motorboat depart from Supetar, the ferry terminal on the adjacent island Brač, towards this solitary place. By the time our boat slows down and the sailor goes to the front deck to prepare the anchor, the sea water colours from deep blue to opaline green. The lack of sand makes for crystal-clear water and you can see the sea floor from atop the deck.

The submarine world really shows its true colours when swimming around with a snorkelling set. In the beautiful bay of Mala Maslinica, rusty red coral grows on the rocks, while rainbowfish and sea urchins hide between them, sea shells the size of sandwich plates scatter the sea floor and schools of hundreds of guppy’s swim around. 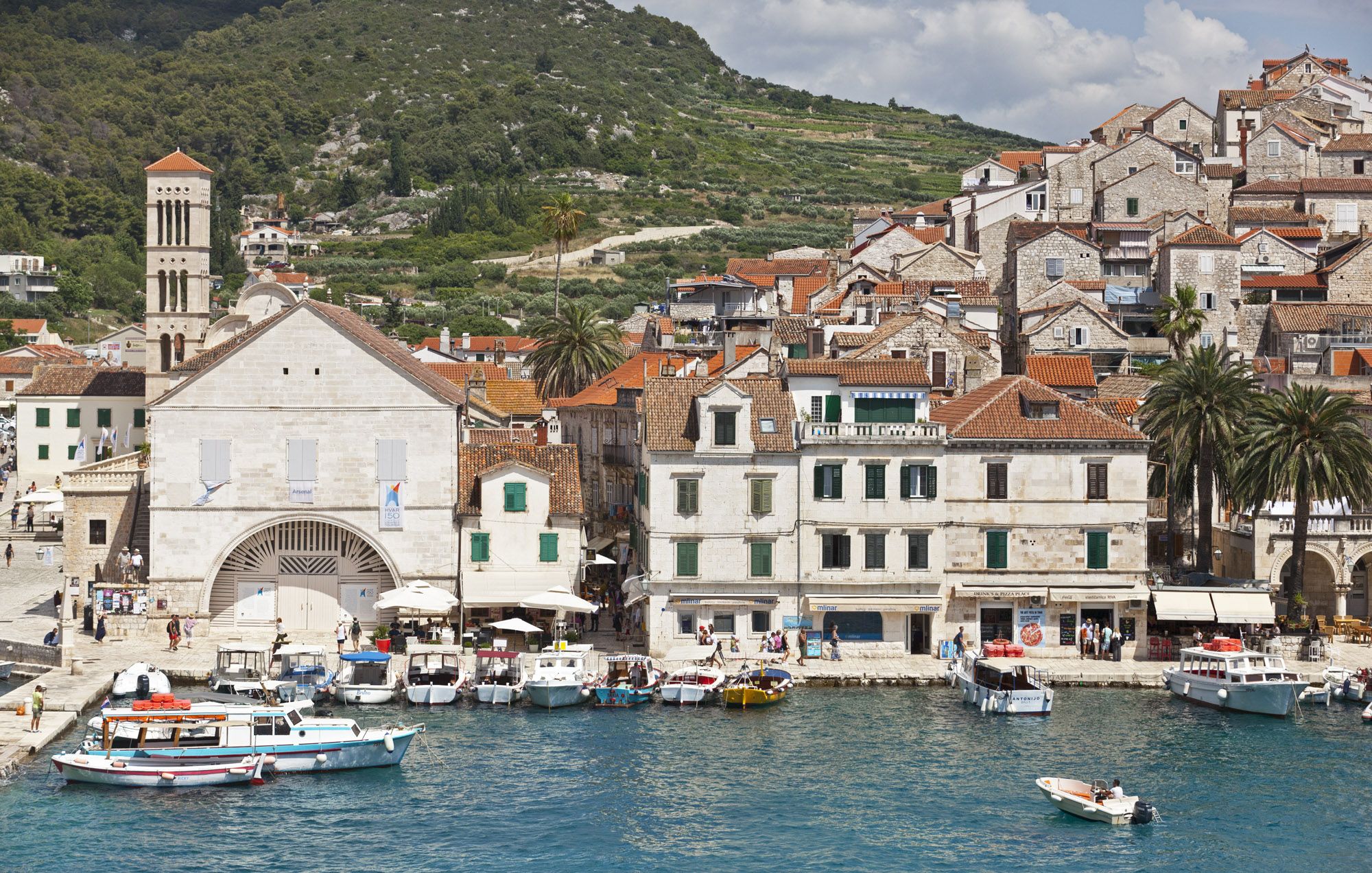 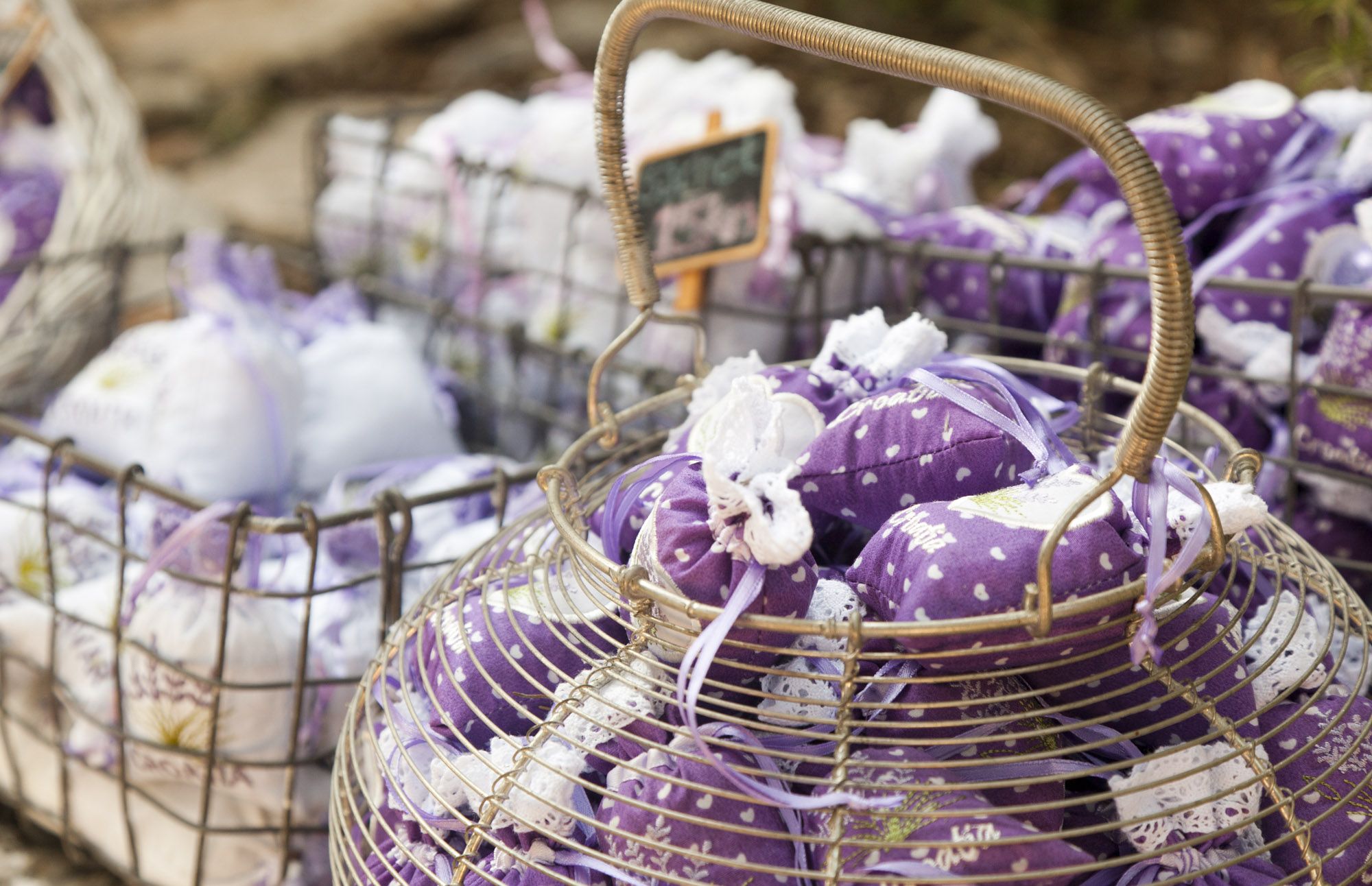 A quarter of all Croatian olive oils and, as we are led to believe by the seventy wine makers, the most divine wines come from Brač. An island one-and-a-half times as large as Malta, but as empty as Foulness Island. And so you don’t see apartments and hotels, but pine trees, cypresses, grape vines and olive trees. Walls of piled stones separate the fields neatly. The bright white limestone, a sedimentary rock from shellfish, is the third pride of the island. At the school for craftmanship in Pučišća, where the door is always open to visitors, teachers proudly tell off the limestone of Brač being used in the White House and the Opera House in Sydney.

Driving around the island, the scent of lavender and sage slips through the open windows, or, even better, through the sunroof of the rental car. And when the car stops at an observation punt, for example to stare at the sailing boats sliding through the sea as white dots, only cicadas break the silence.

Whatever way you drive, at some point you pass Skrip, the oldest settlement on Brač. The village is situated high and dry, away from the sea, away from the warships of the Turks and Venetians. At the edge of the village, next to the noble fort, we find a 17th century house that was used as an olive press building for centuries. After an extensive renovation, it opened as olive oil museum in 2013. The coarse grinding stones, the vertical press and the roof of loose stones remind you of the hard labour involved in the farm life back then. “On Brač, the landscape is still inaccessible for machines,” says Stefanio, guide in the museum. “For 3000 year, all families pick the olives from the ground in the autumn, after shaking the trees. Helping friends and families were, and still are, greatly rewarded with heavenly oil.”

On the second floor of the museum, you taste those homemade oils, tapenades and baked olives. And, to make your tasting look a lot like lunch, some bread, cheese, and fig jam made by the neighbours. 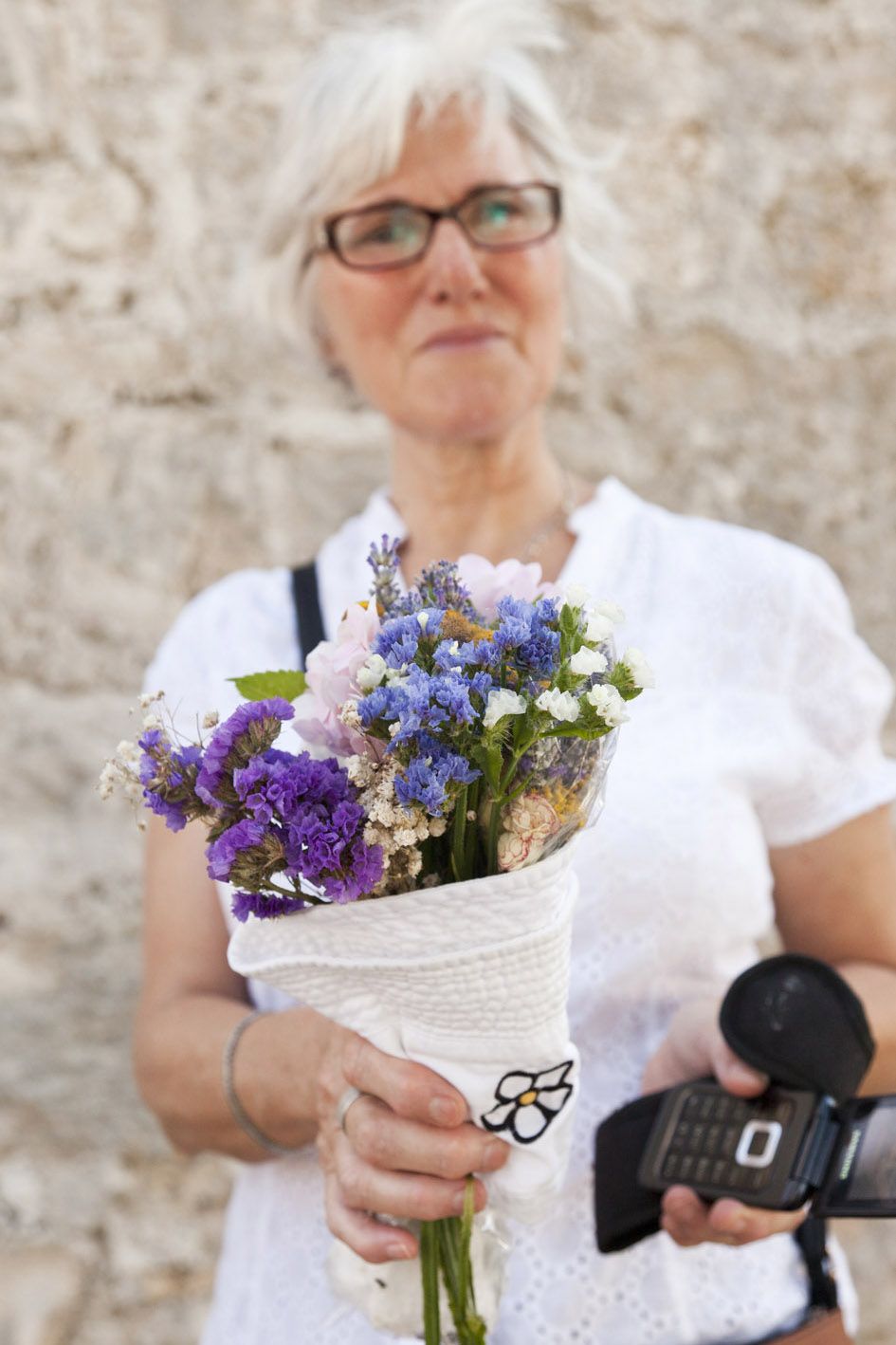 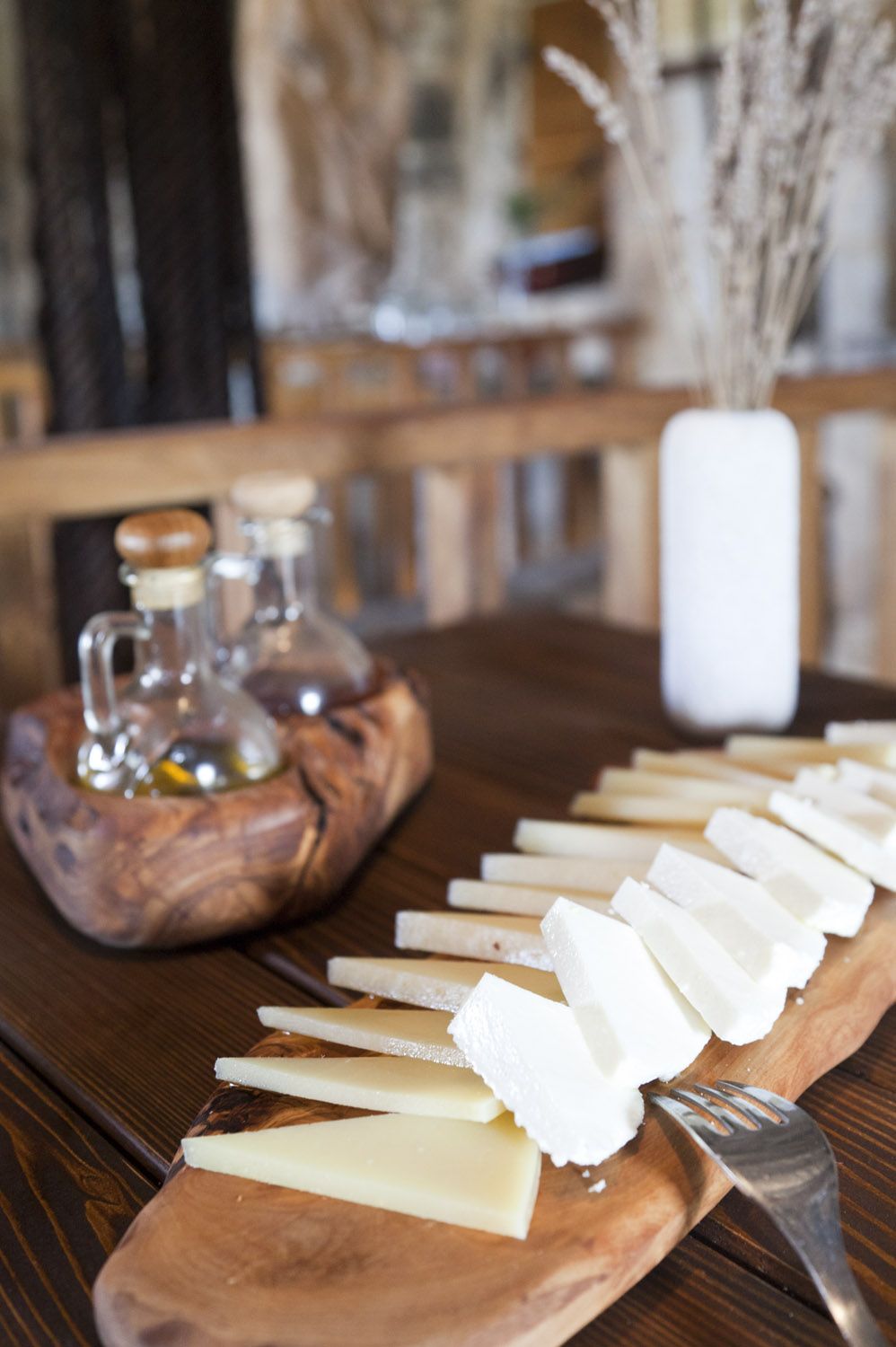 The beating heart of the archipelago is Hvar, an island only thirty minutes by boat south of Brač. The capital, with the same name as the sixty-kilometre-long island is mostly car-free and has, thanks to 400 years of Venetian influences, all ingredients of an Italian coastal town. Strolling through the old city, you pass by inviting ice cream shops, million-dollar-yachts in the marina, promenades with terraces and steep alleyways filled with drying laundry hanging above.

The Piazza is known as the most beautiful square of Dalmatia. In 2017, the new mayor constituted a new law, banning bathing suits in the streets and picnics on the Piazza. “This is not a beach,” he argued. And he is right. Because where other cities only open the cathedral doors to tourists, in Hvar, dozens of catholic Croatians enter the 15th century Franciscan monastery for a service or a blessing. Preferably with a bunch of hand-picked flowers and lavender. The sanctuary is full of tinsel and icons, but alas, no photographs allowed.

You look out over the Pakleni-archipelago, a collection of dream islands with at least 28 bays 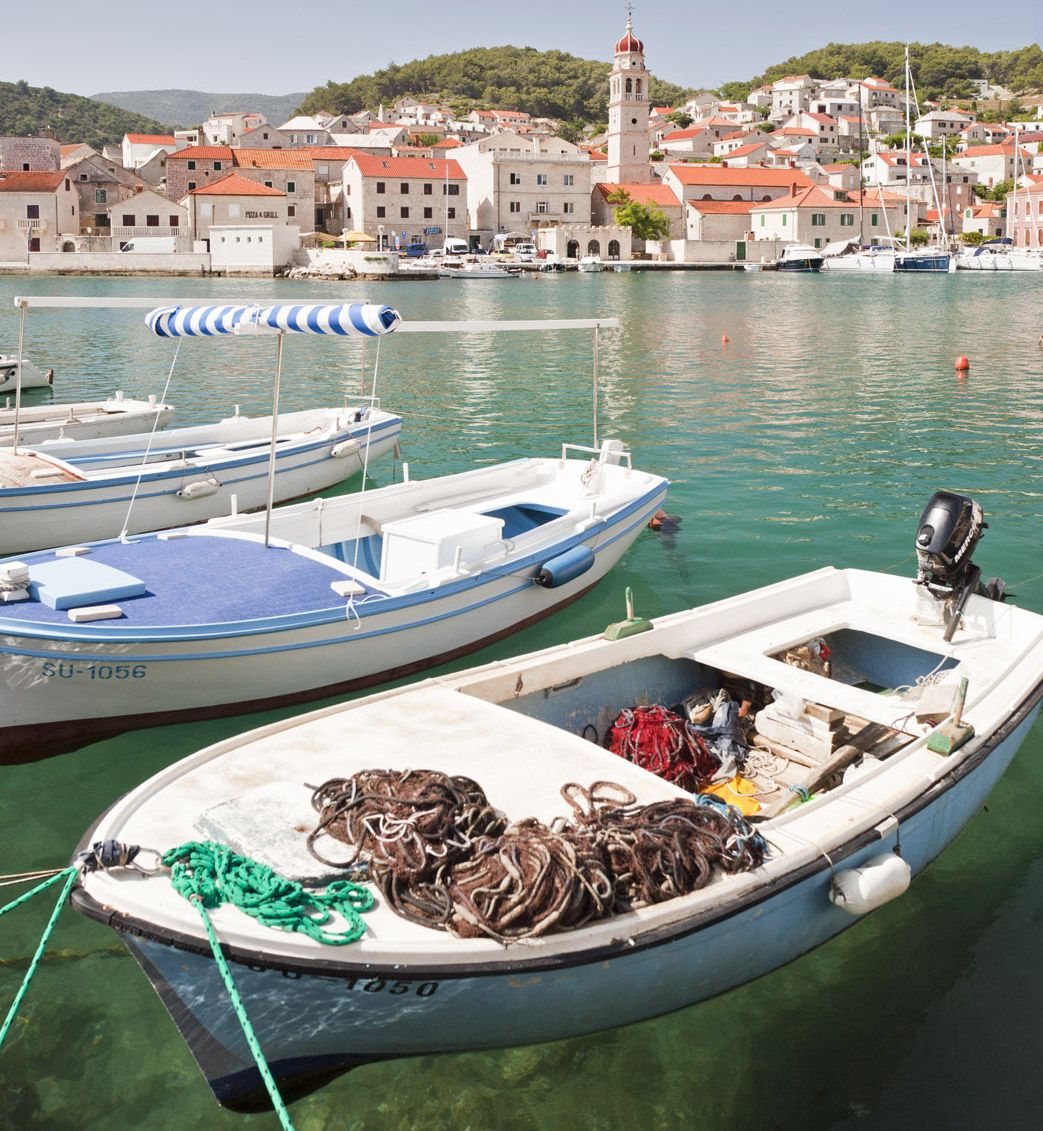 TUI is the only airline who flies non-stop to Brač from Rotterdam. They also offer package deals with transfers and hotel included.

One week in Brač, including return flight, transfer, hotel, breakfast and diner will set you down a mere €399 each.