Through the eyes of locals
Authentic Amman

Amman is a tricky one. It tends to fool even the most experienced traveller. At first glance, it seems to offer no attractions beyond its impressive citadel and amphitheatre. But that’s just the fun of Amman. Finding its hidden charms takes a bit of effort. But they are there. Oh yeah, they are there. And they are easy enough to be found with a little help from the locals, who know the secrets of its neighbourhoods.

“For me, Amman is like a house. There are very nice rooms, like the guest rooms, where tourists usually go. But I want my guests to know and appreciate the beauty of the other rooms in the house,” says Anas Amarneh, wearing his leather jacket, hooded sweatshirt, fingerless gloves, backward cap, and a smile that doesn’t come off. Anas is going to be our guide today to discover the most authentic side of the city. 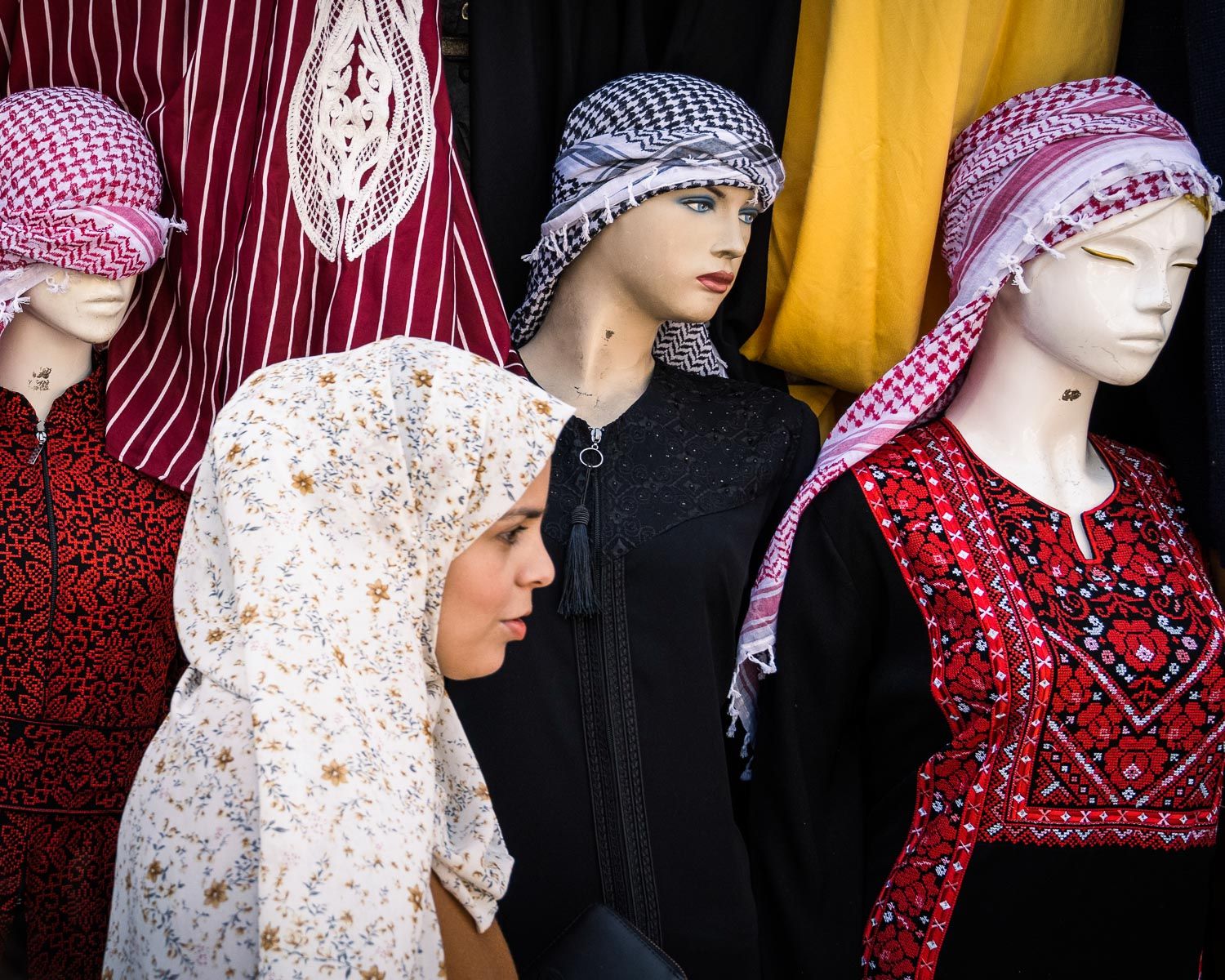 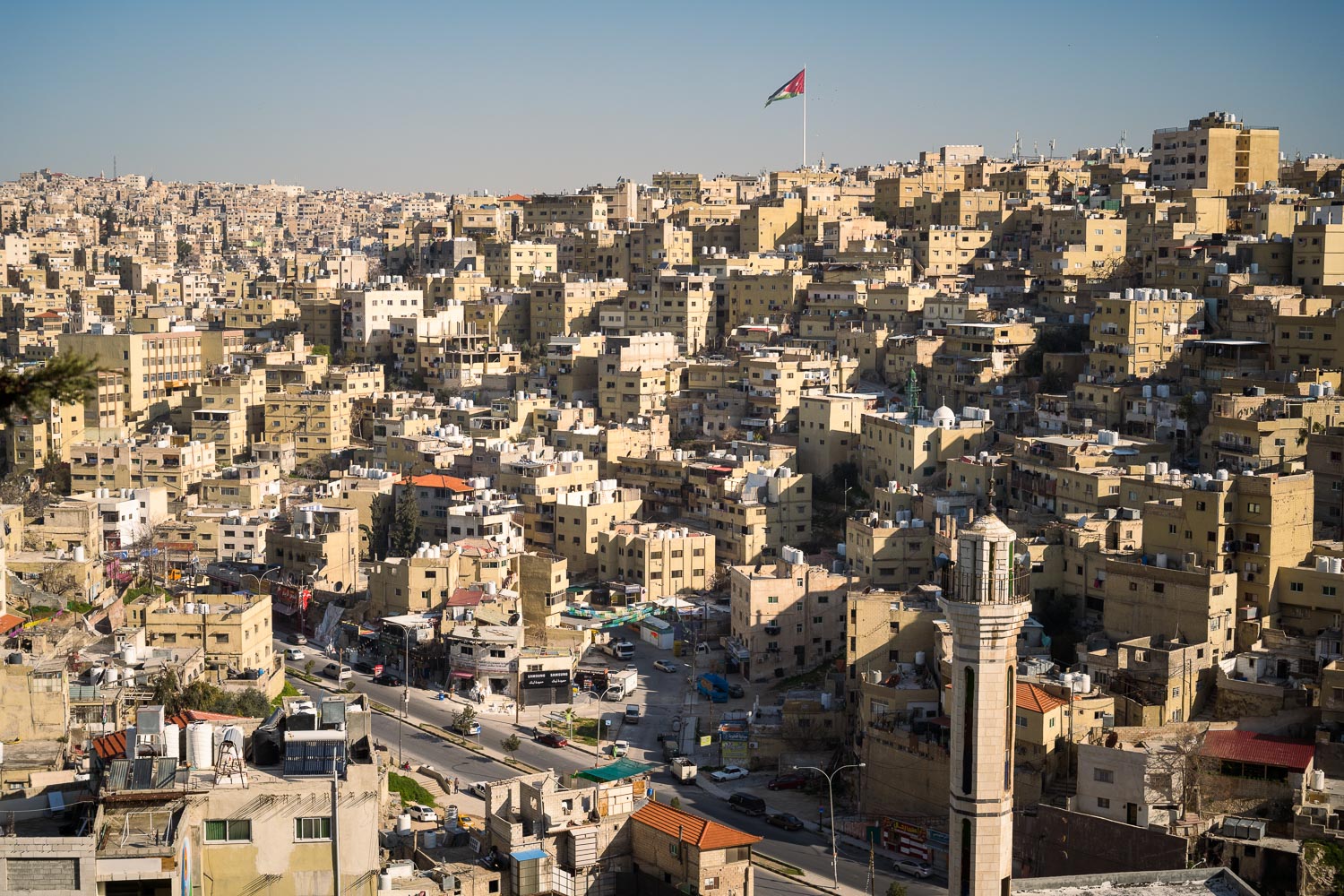 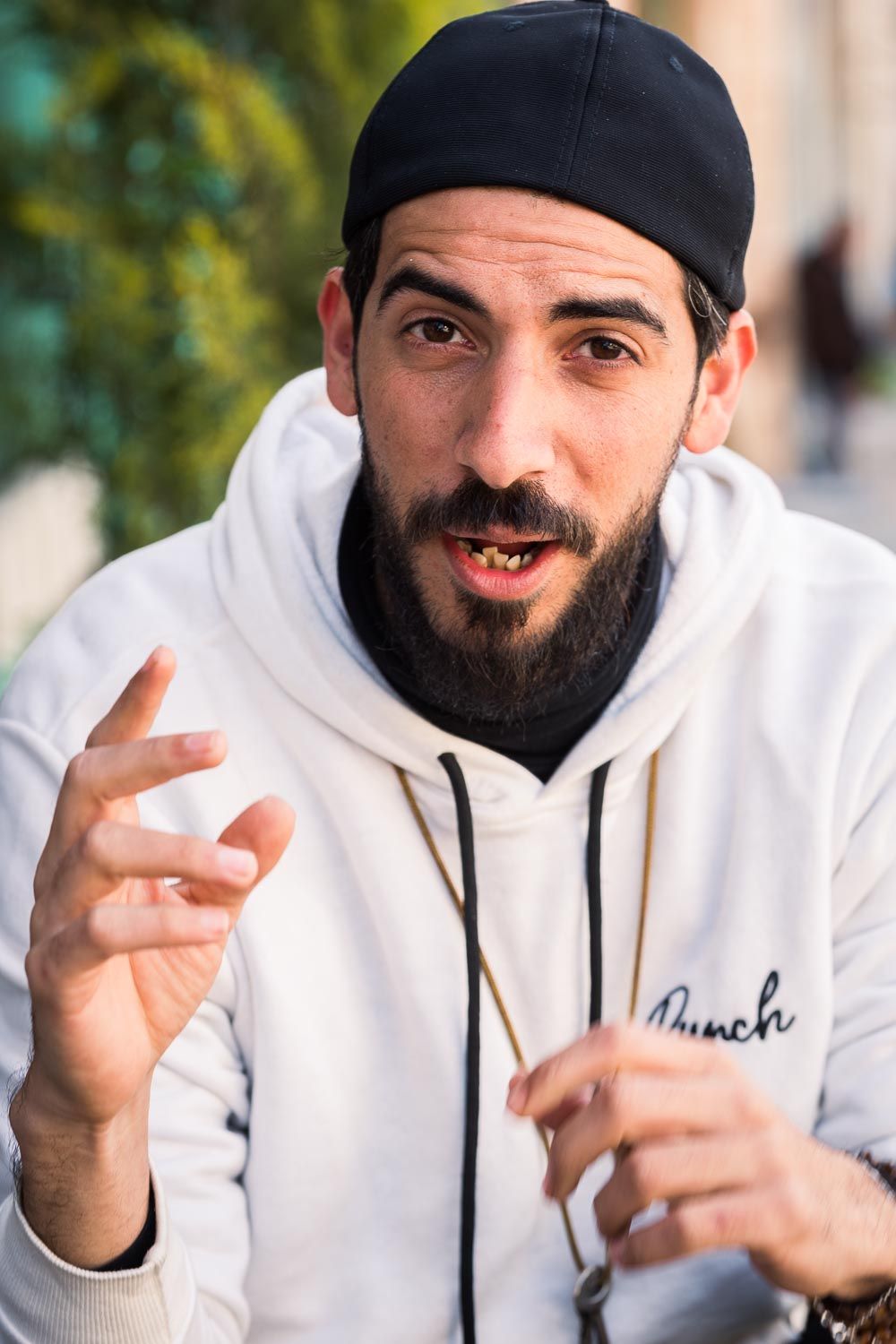 THROUGH LOCAL EYES
We meet at Al-Haj Mahmoud Habibah & Sons, famous for its Kunafa. A group of locals is munching away on this tasty and famous dessert of Syrian origin. Anas explains the stories that emerge at every turn: a unique tree planted by Australian soldiers, some poems written on hidden walls, a parking lot whose rooftop hides a lookout with panoramic views.
“Welcome to my city; see that mural? It marks the east of the city, which is the least visited part because there are no stores… but there are many stories!” Anas is a whirlwind of ideas and words. A thoroughbred storyteller.

We stop at the small Café Yafa, a place curiously decorated with album covers, illustrations, and photos of notable characters such as Abdel Nasser, Einstein, Muhammad Ali, and Saddam Hussein. “I belong to a different generation, more motivated by values than ideologies. We young people will not make the change. We are the change,” he tells me passionately as we drink Turkish coffee. Anas wants to build bridges between the humbler east and the wealthier west. And he wants to do it through concerts, exhibitions, or family meetings. “We show something of the city you can’t find on Google.”

As we walk around, Anas tells us stories about all the graffiti and murals we see on the walls: from small drawings of watermelons symbolizing support for the Palestinian cause to poems in Arabic that he translates to give them meaning. Some portraits also need explanation, such as that of Mahmoud Derwis, considered the “poet of the resistance” and the mastermind behind Yasser Arafat’s words and speeches. 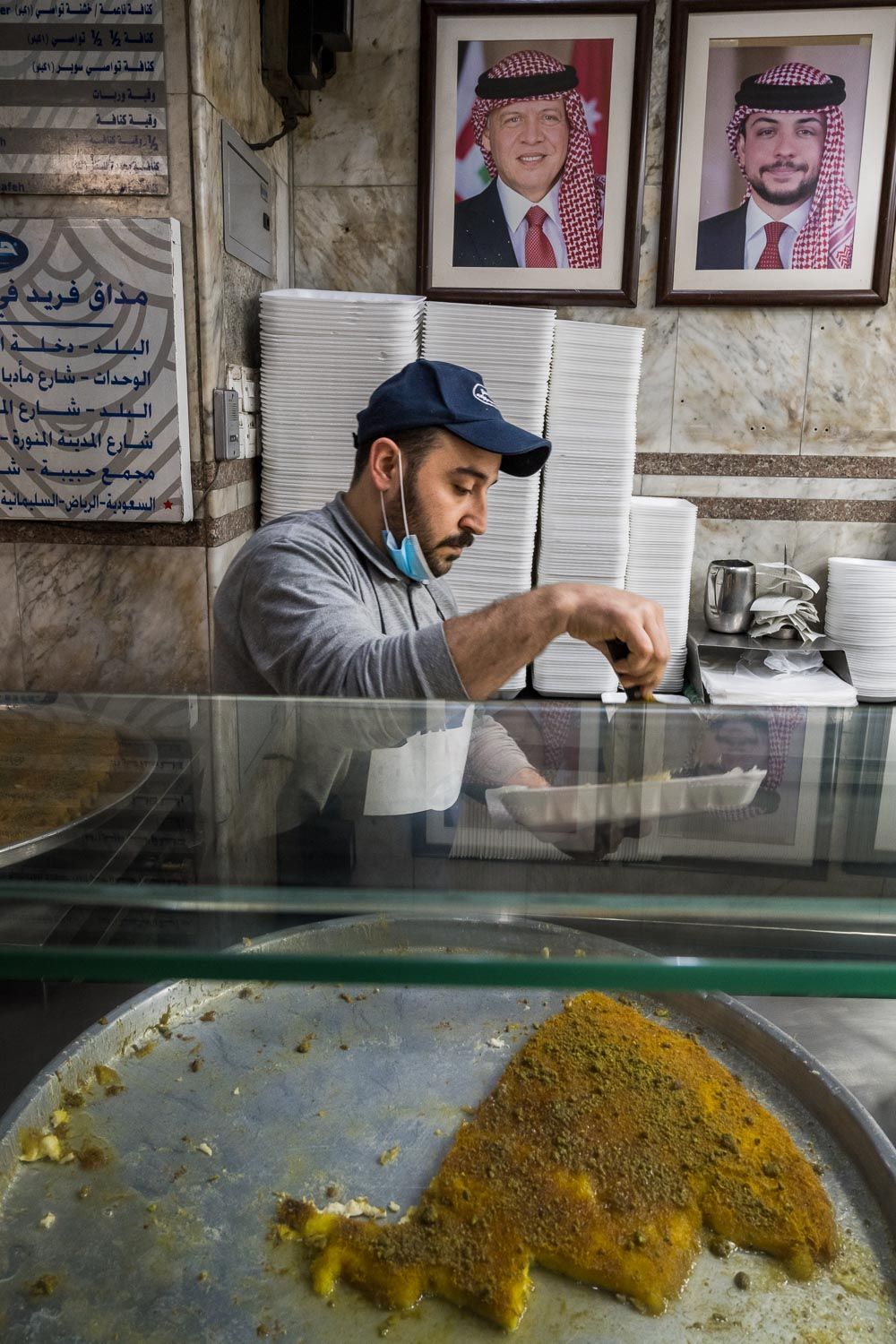 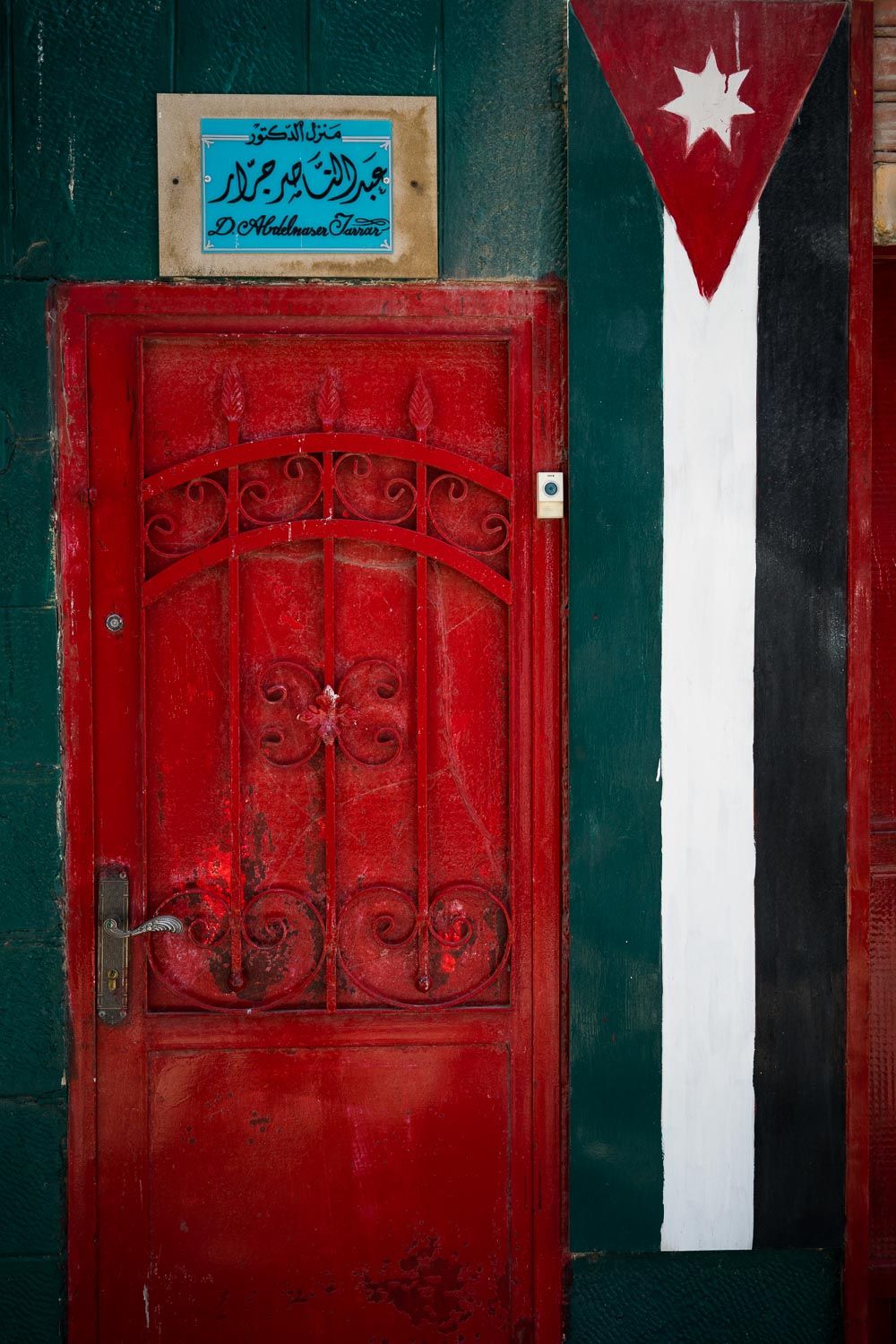 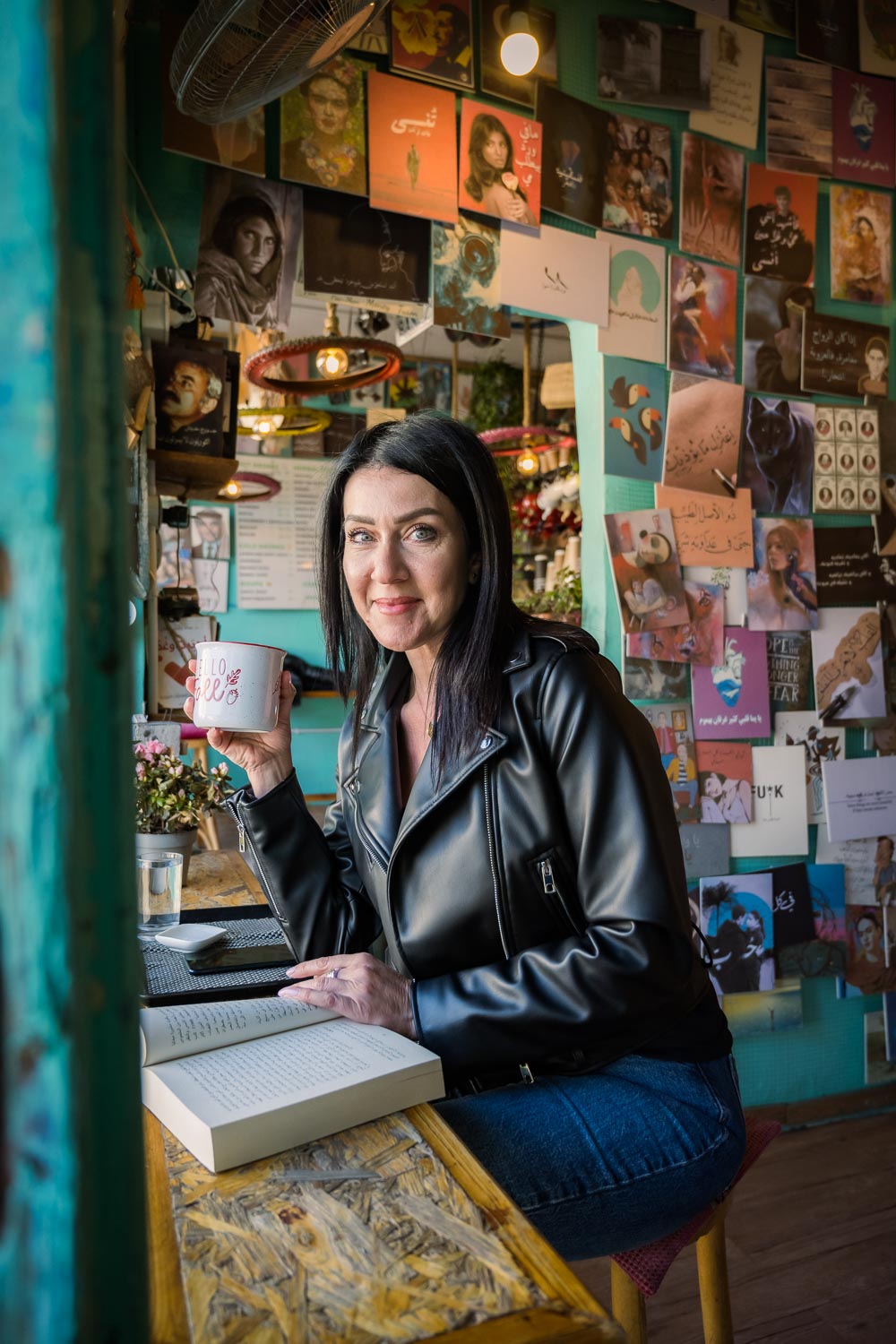 Next stop is at the Jadal Café, a space for artistic creation and cultural exchange disguised as a coffee shop. A place where you don’t pay for the coffee but for the time you spend. In the local library? In the urban garden? In a discussion room, perhaps? Or maybe in one of the theatre, music, or dance workshops. What is the profile of your customers? I ask Anas. “I have clients who are more interested in meeting people than seeing places. People who sometimes don’t even want to walk. They want to talk.”

Like any Middle Eastern city, life implodes in its souks. The sounds, smells, colours, and chaos of the markets are one of the most intense ways to experience a city like Amman. Anas seems to know all the shopkeepers. He greets and talks to everyone as he invites us to pick up nuts, taste spices from the stalls, or chat with the Egyptians who run the fresh fish stalls. “If anyone were missing from the market, I would notice,” he says as he introduces me to Abu Mohammed, “He has been sitting here, on this small box, peeling garlic with his simple knife, for 30 years.”

BATTLE IN THE AMMAN SKIES
“In November, the skies over Amman become a battlefield,” Anas tells us. “That month, about 500 pigeons fly in different flocks, each from another trainer. The winner is the one who manages to get the most pigeons back to his rooftop. We call it ‘The War’.
Wait a minute. Pigeons, trainers, battles? What are you talking about? I ask, intrigued. “It’s a custom that originated in Iraq and is quite popular here. In Amman, hundreds of trainers train daily, each with their group of pigeons. Not only for the war in November. There are constant battles in the sky to catch pigeons.” 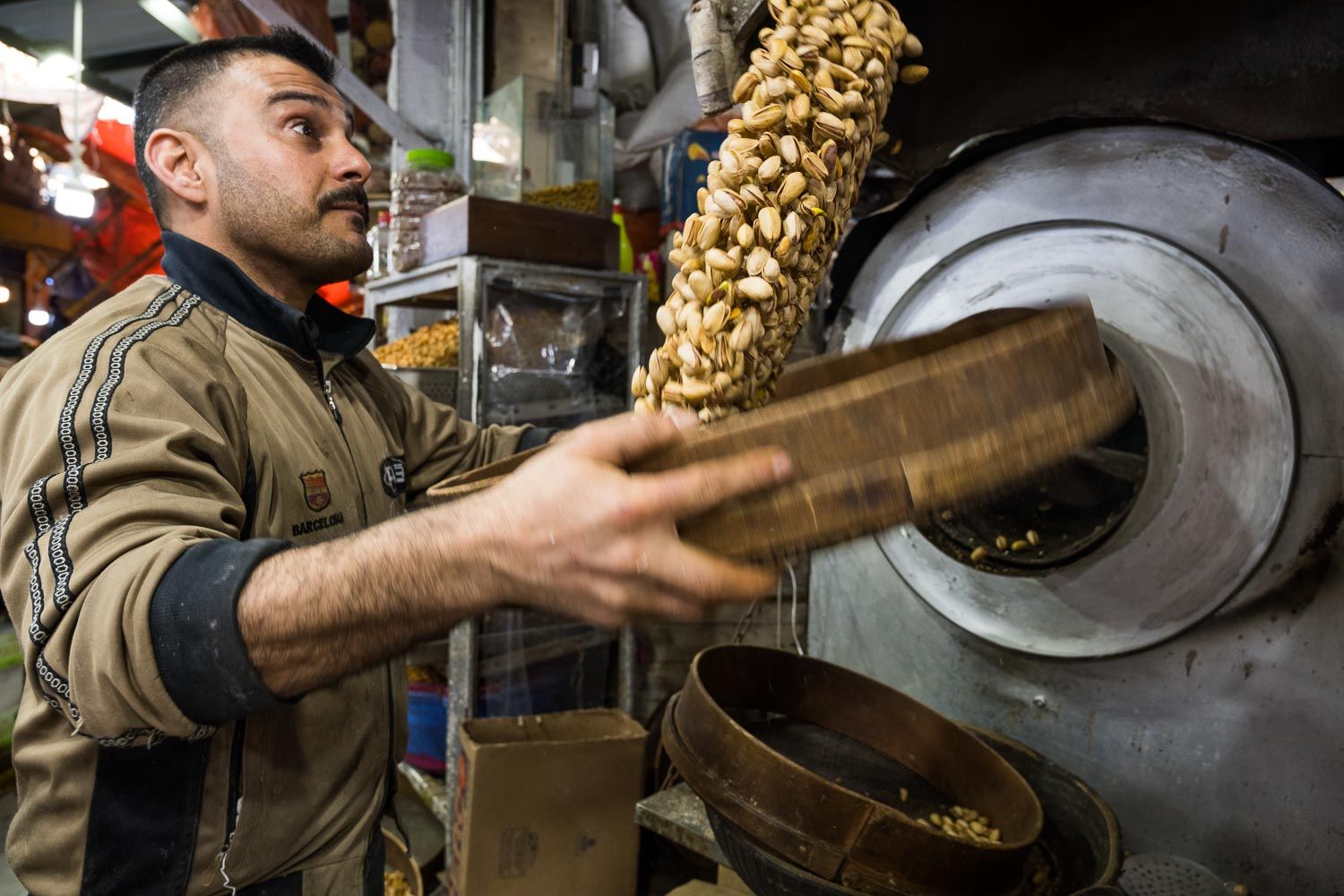 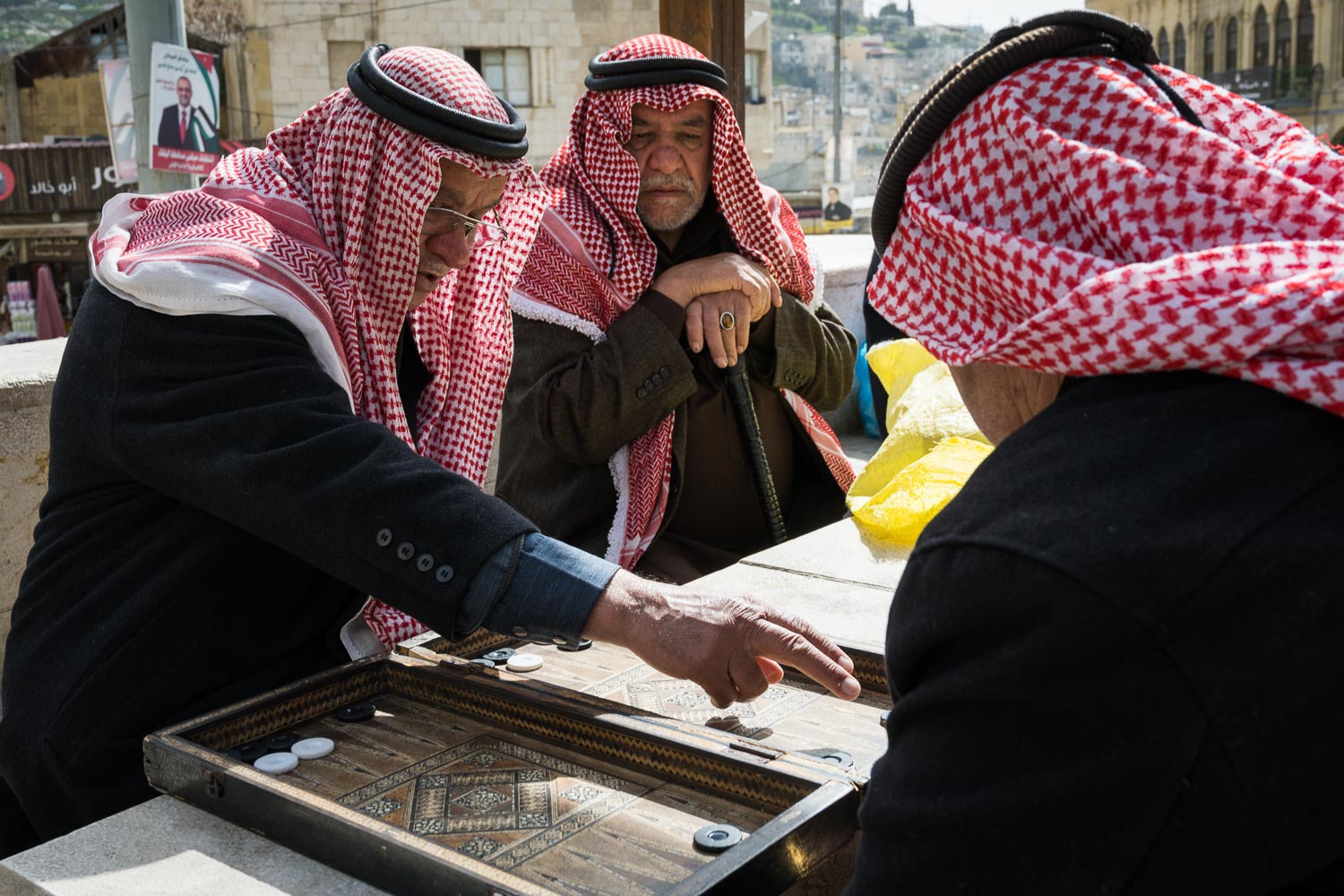 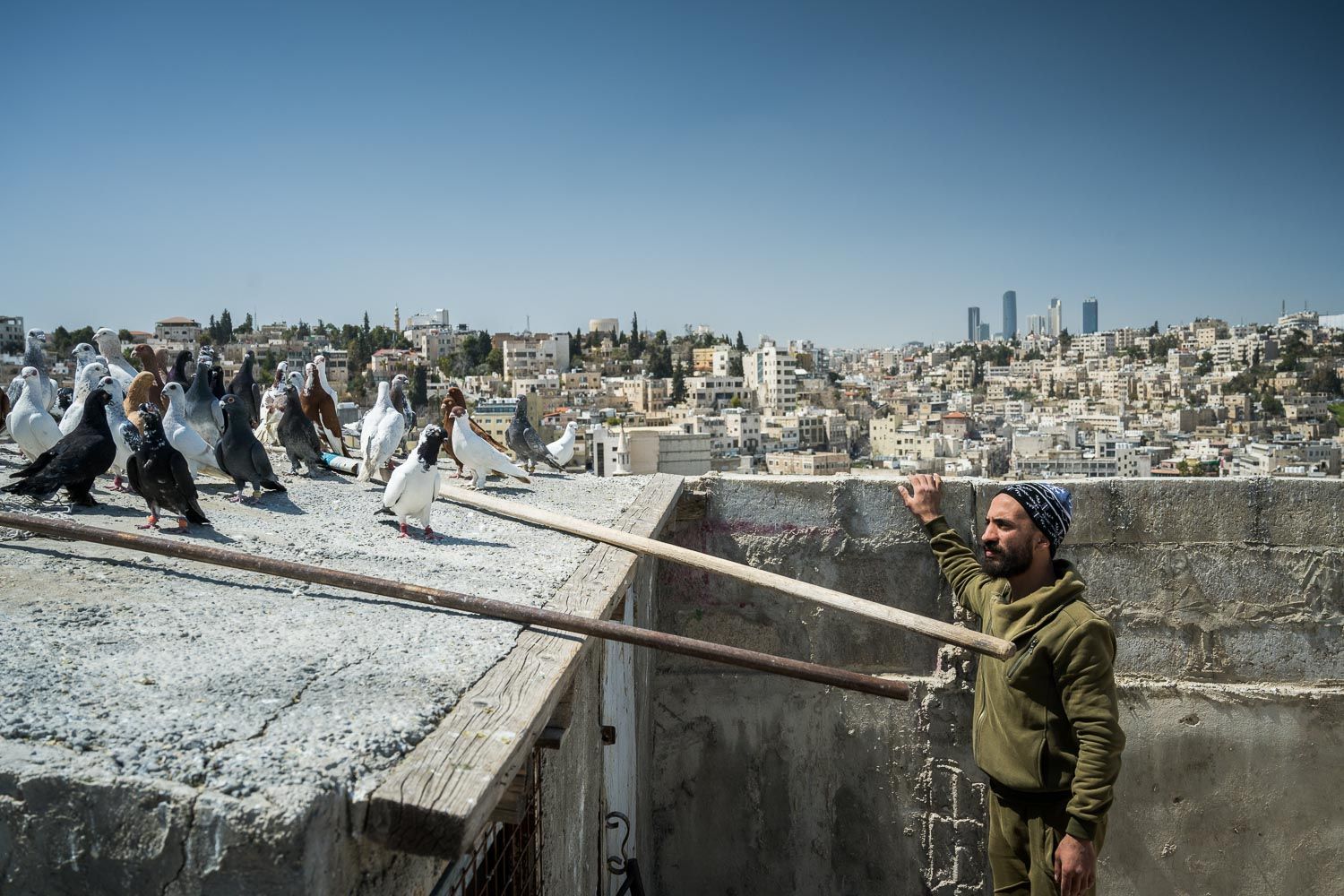 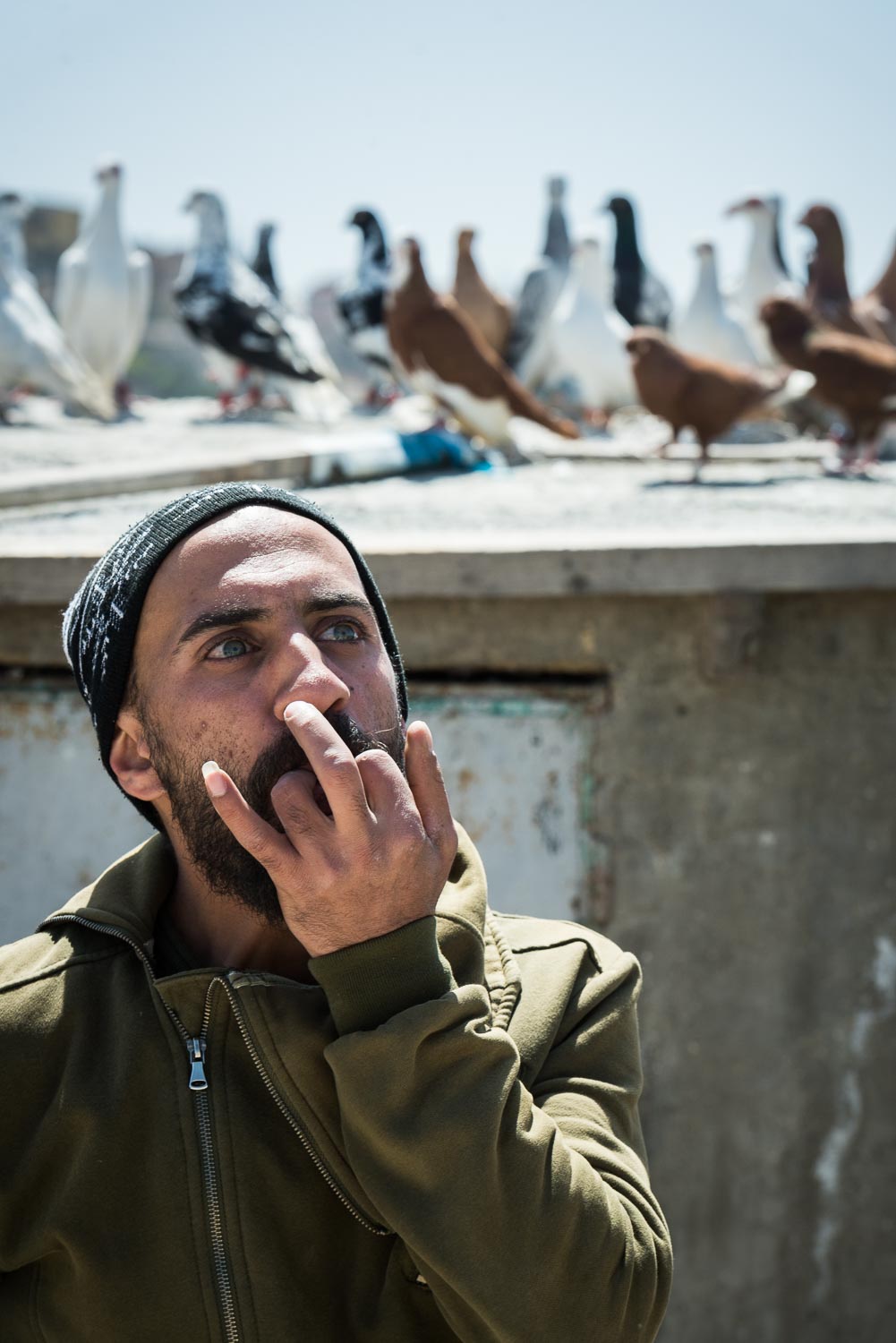 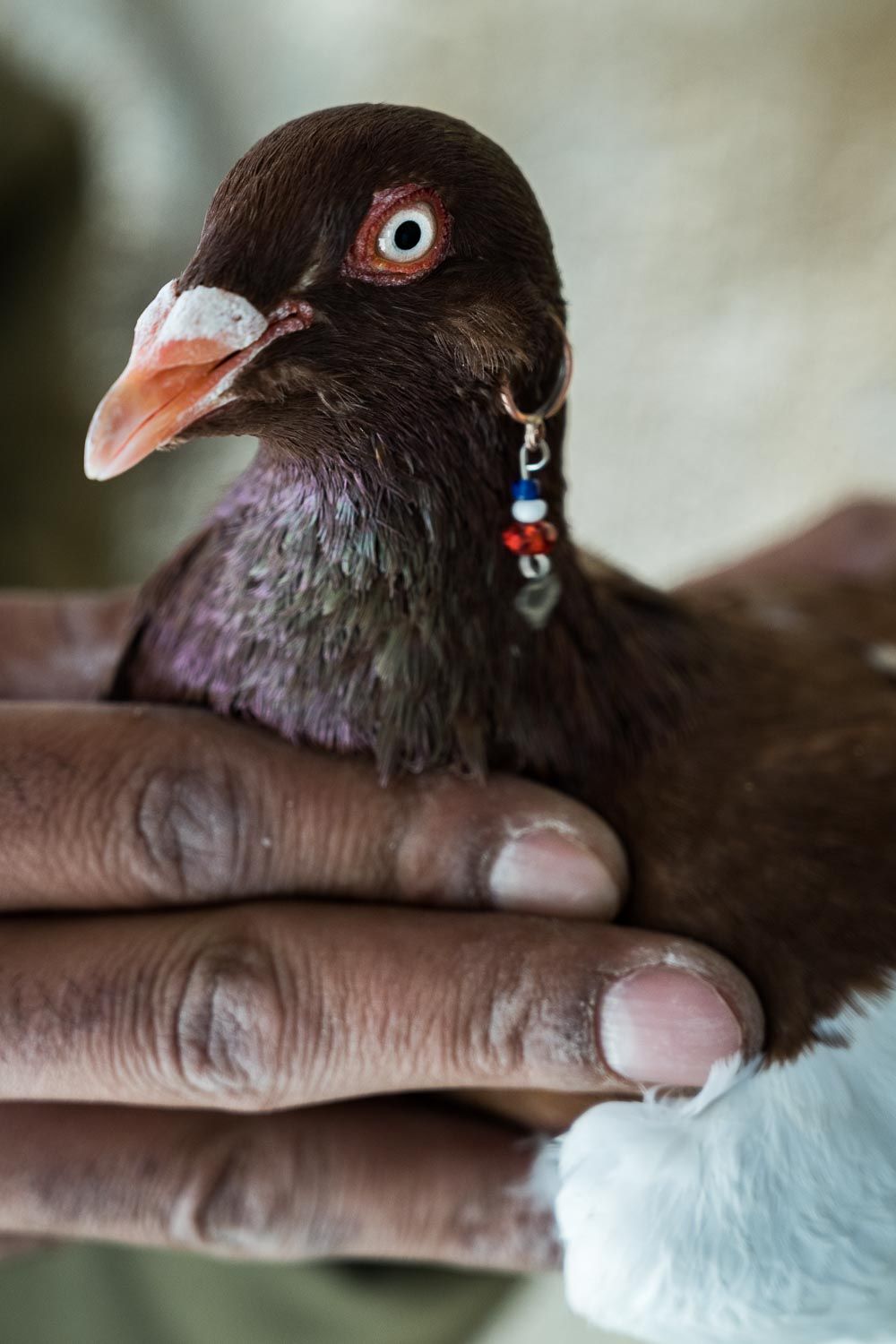 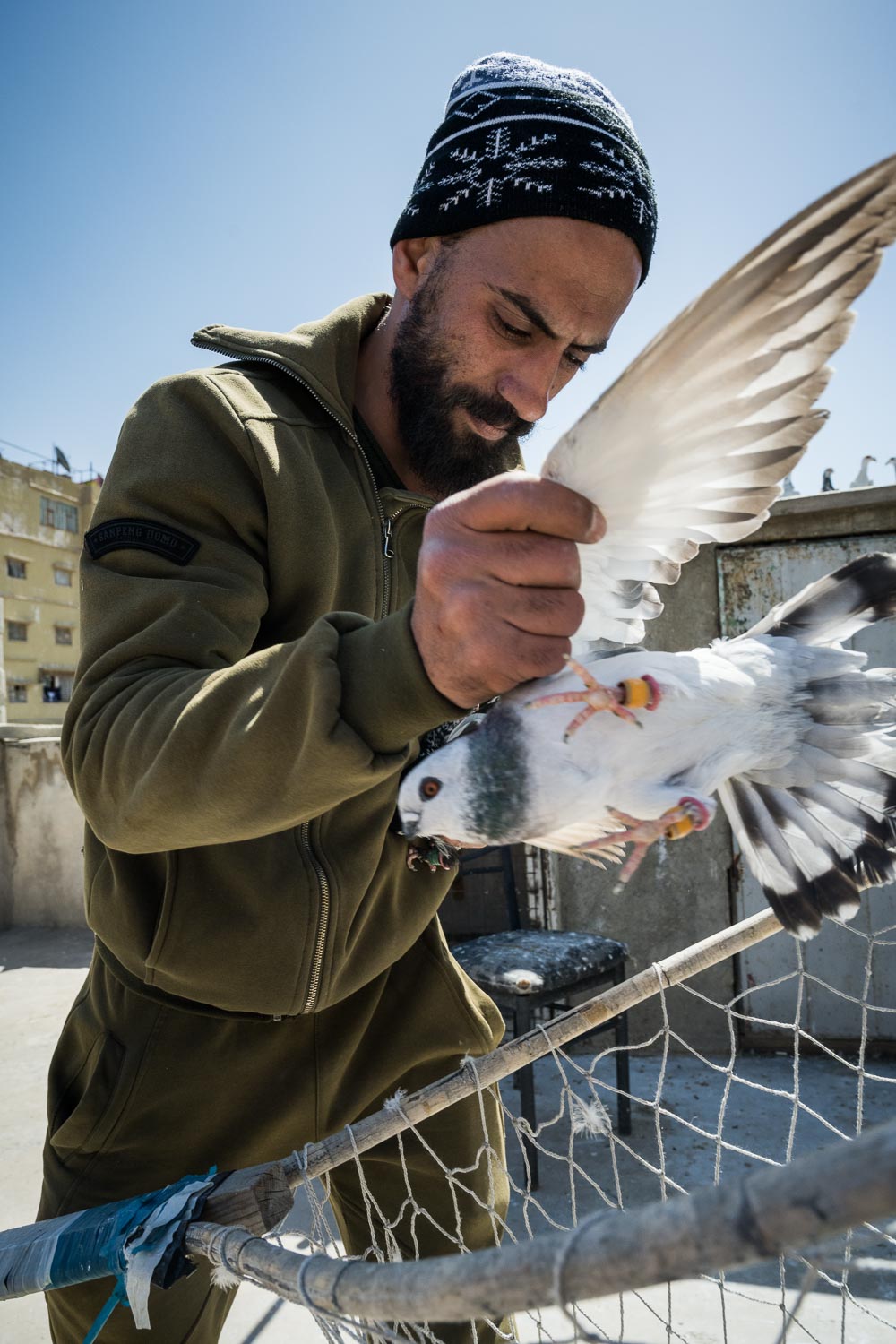 Anas lives up to his status as a local guide and takes us up to the rooftop of a trainer friend of his. “Meet my friend Mahmood Al Shanteer, one of Amman’s many pigeon trainers.” Mahmoud is 30 years old, light-eyed, and wears a green tracksuit. He tells us that he was introduced to the art of pigeon training by his uncle in 2011. “In my neighbourhood alone, there are about a hundred hunters,” he tells us. The trainers work with their pigeons daily: they feed them regularly, train them with whistles and build a bond of trust. Once in the air, it is a matter of the flock attracting pigeons from other groups to their rooftop, where they will be hunted (or not) by the trainer.

“Today, I win one, tomorrow I can lose one”

Dah, dah!” Mahmoud looks at the sky as he feeds his pigeons and speaks to them in monosyllables. He also shakes a dipper with food and uses the sound as a lure. Then, suddenly, a large group of pigeons of all colours appears from the sky. “There are different species: Kashmir, Pakistani… but the Baghdadi is the most loyal,” he tells me. “This game is not just a matter of hunting, but also about loyalty,” he tells us as he smokes one cigarette after another.

“I caught it! “Once hunted, the rule is that it remains three days without flying and wait for another trainer to ask for it to return it. Or not. It all depends on whether it’s from a friendly trainer or a hunter with whom there are no agreements. “The problems come between those who do it for business,” Anas tells me. “I have agreements with almost everyone. For me, it’s a hobby more than a business,” Mahmoud tells me, sucking the last cigarette before the next one. “Today, I win one. Tomorrow I can lose another.” 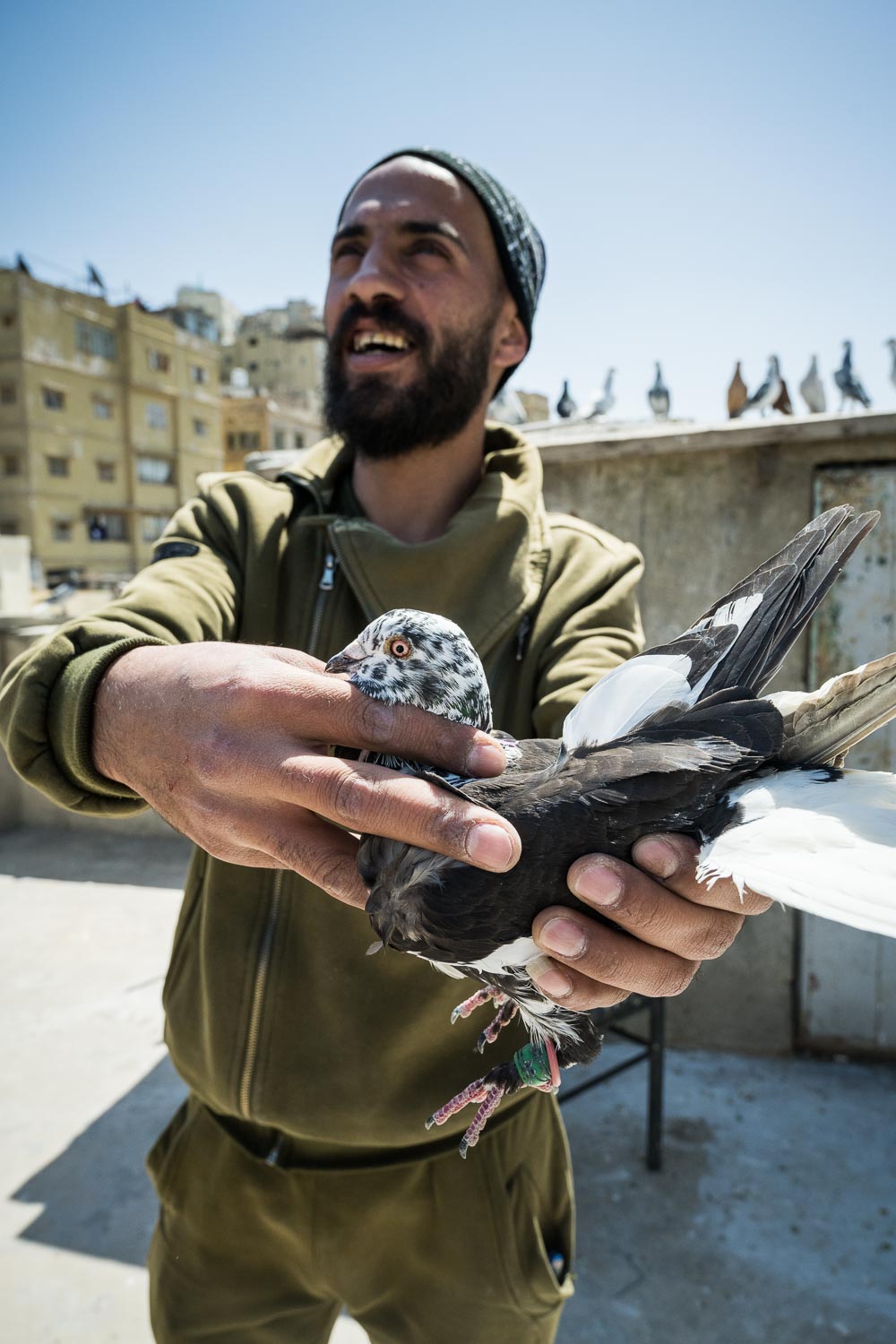 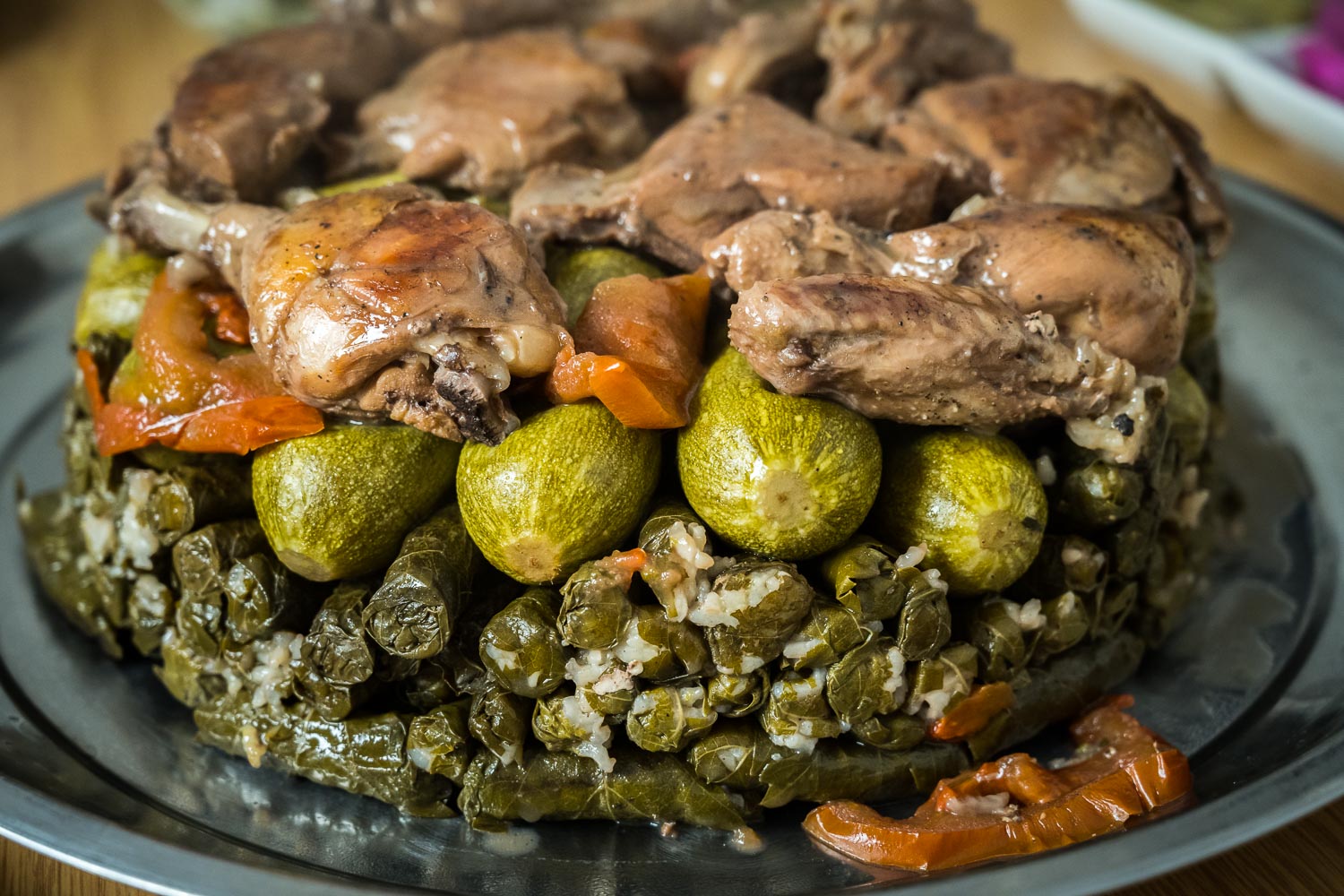 The tastiest tour in the multiverse! A short 5-day tour covering the main attractions of Jordan: Amman, Madaba, Mount Nebo, Petra, and Wadi Rum. And it also allows interacting with the locals, experiencing Jordanian and Middle Eastern cuisine - and even cooking yourself! 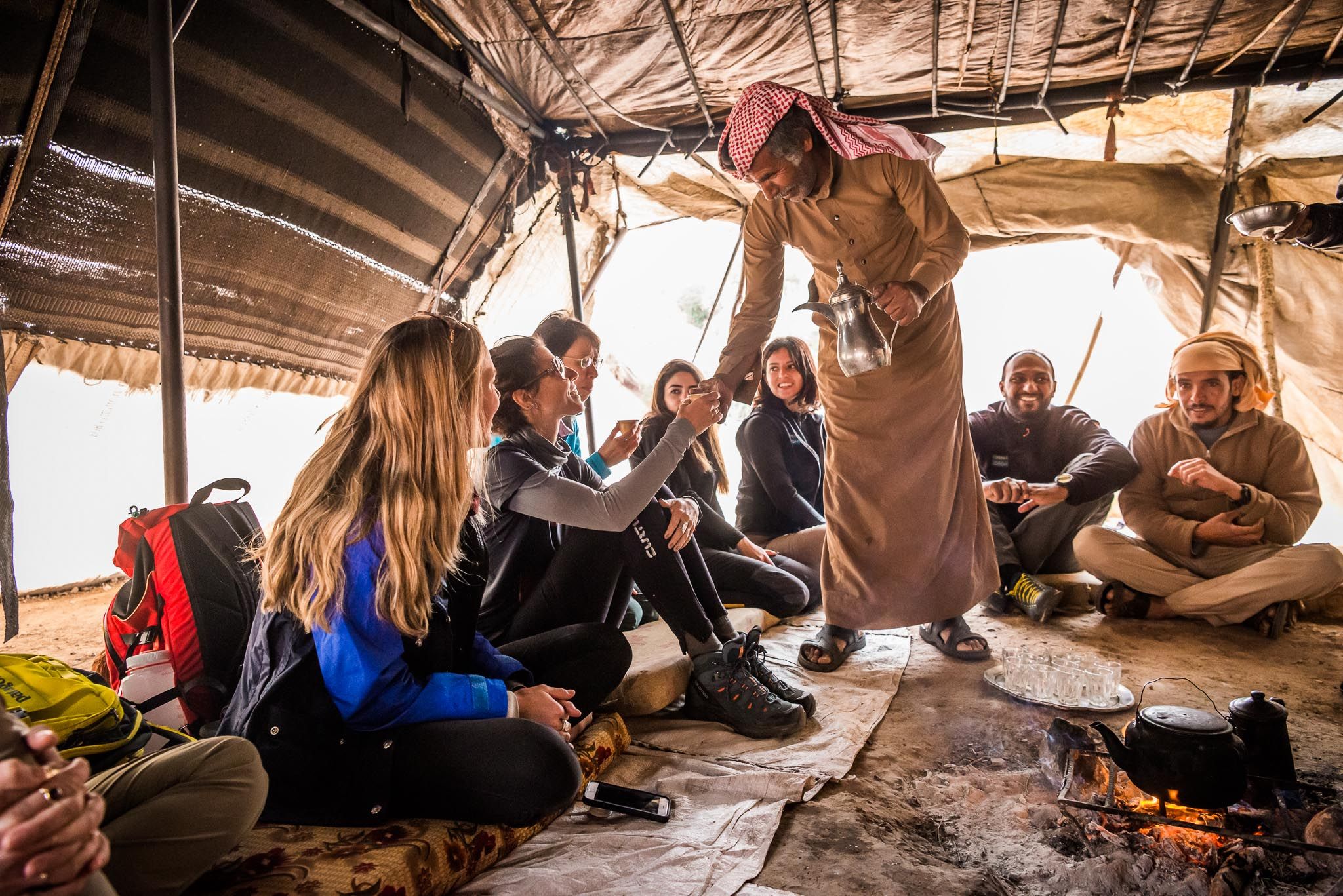 During this holiday, you will immerse yourself in Jordanian culture and experience genuine Bedouin hospitality. Visit most of the highlights in Jordan and meet locals and learn from them about Jordanian customs and traditions and the fascinating history and culture of Jordan. 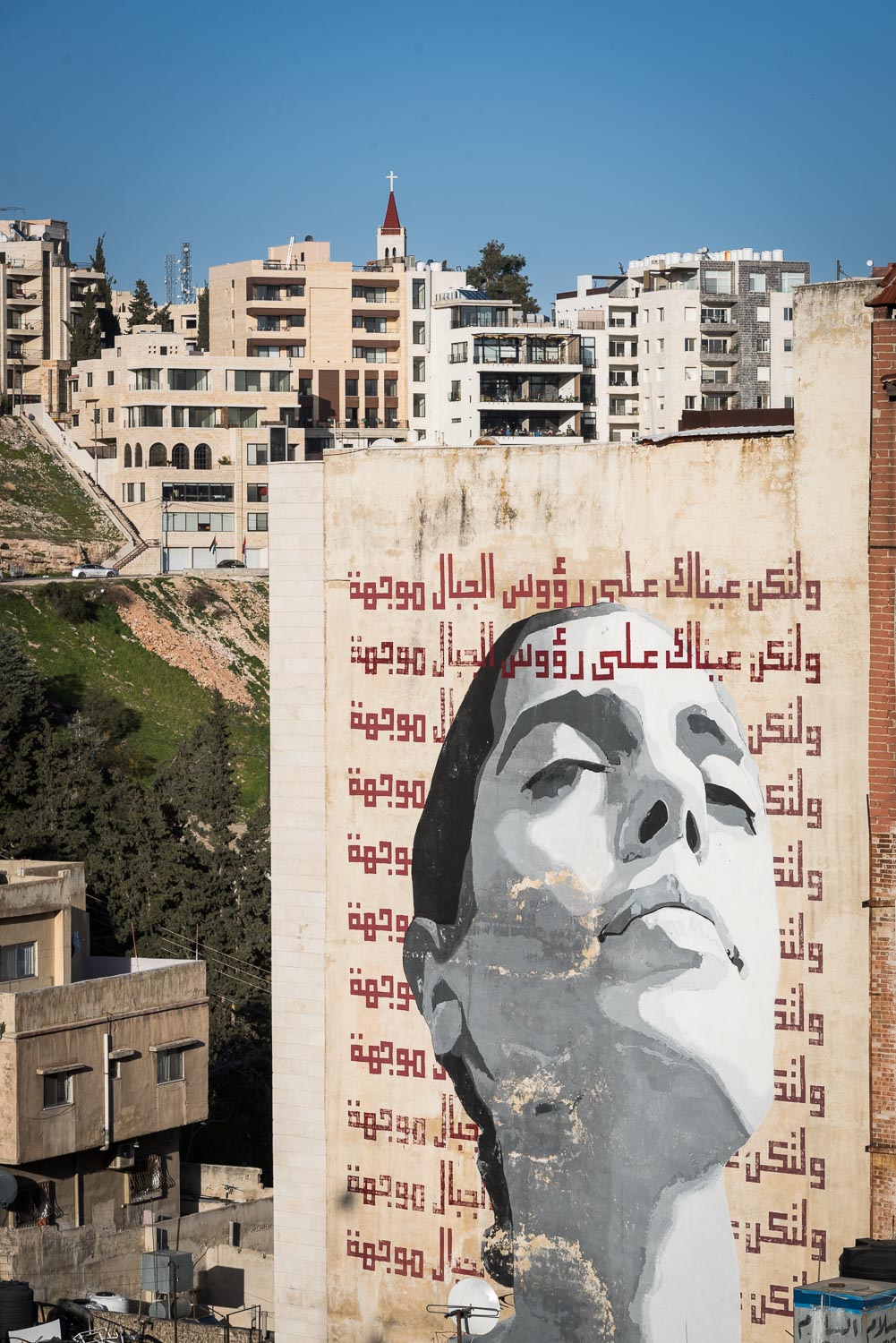 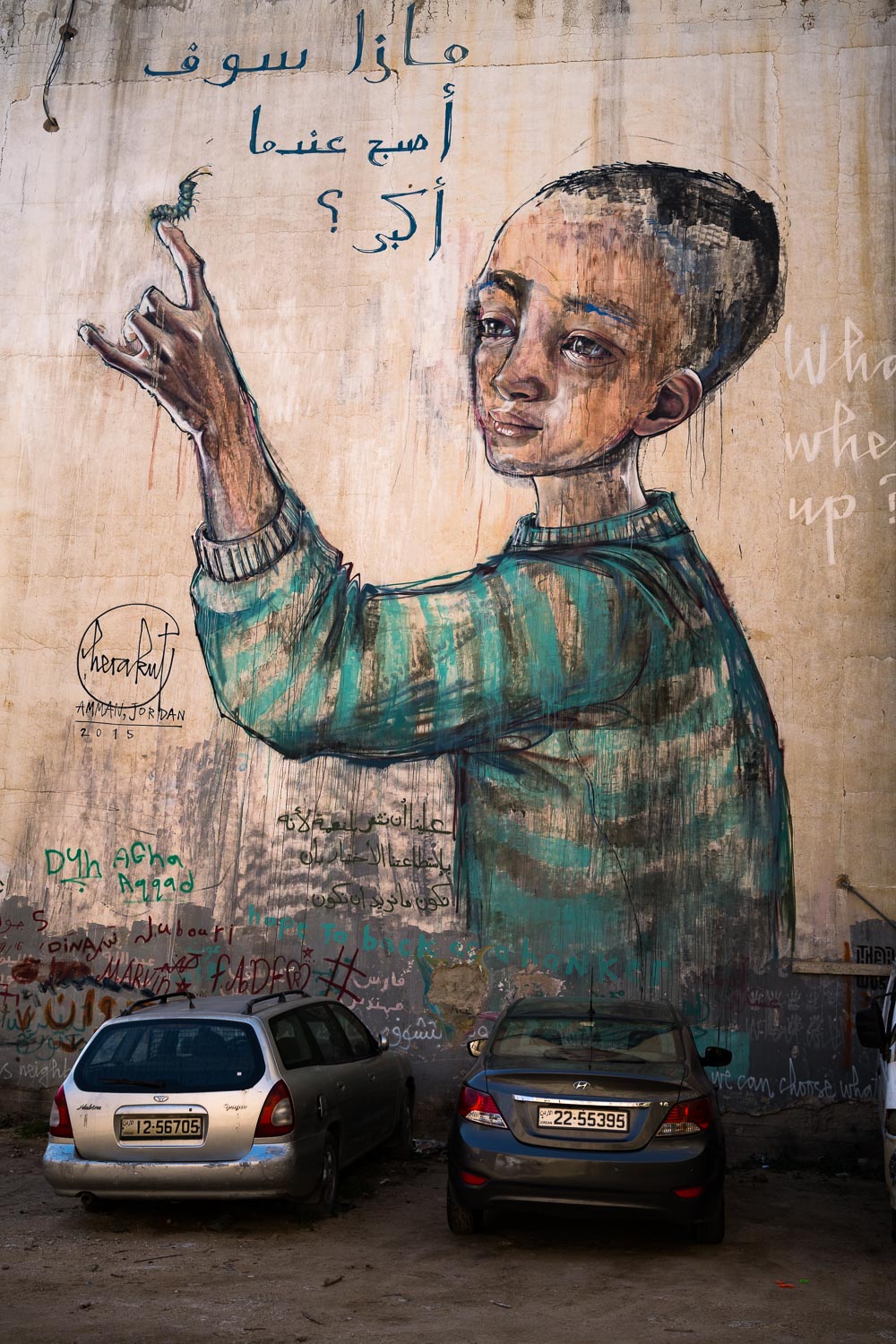 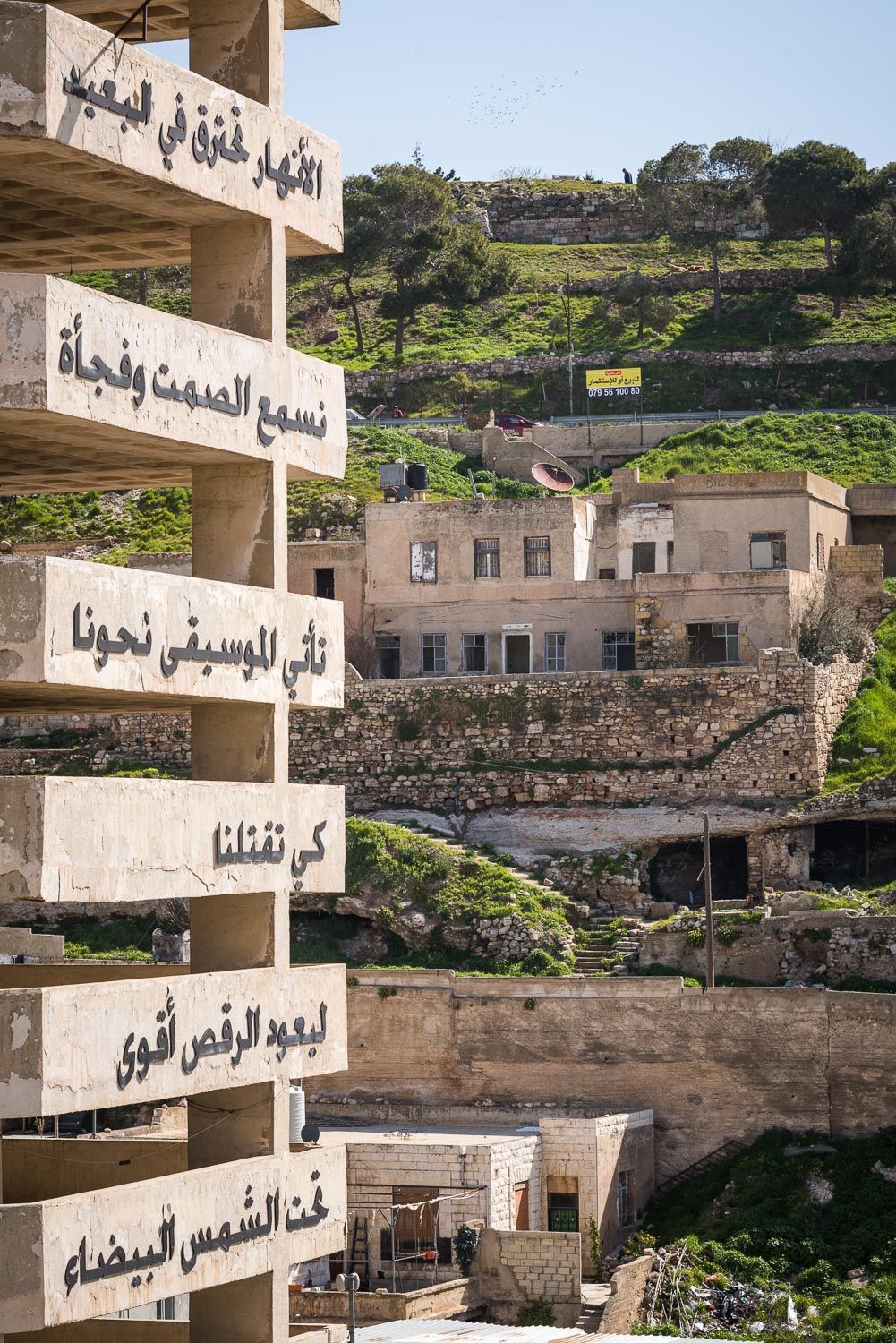 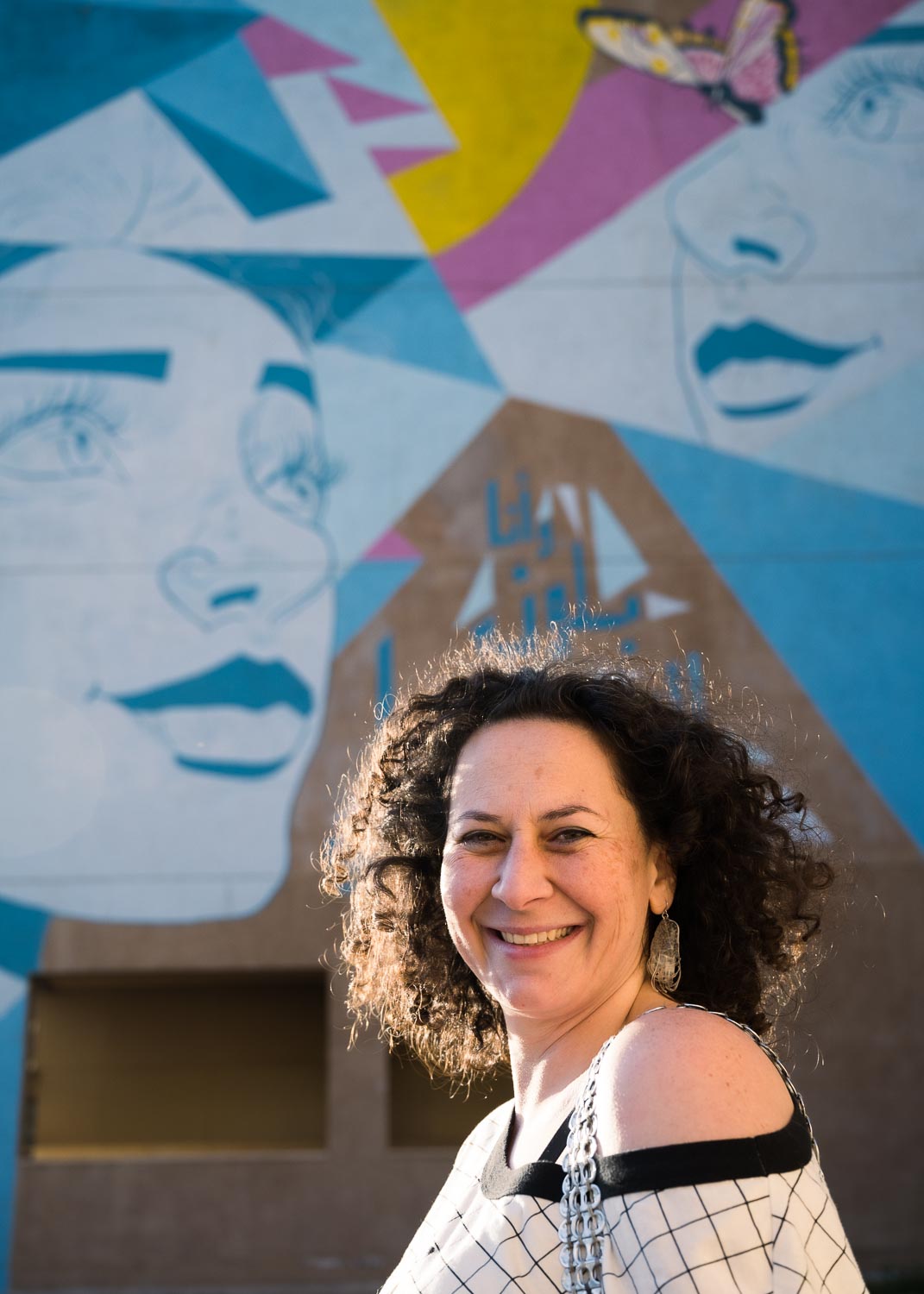 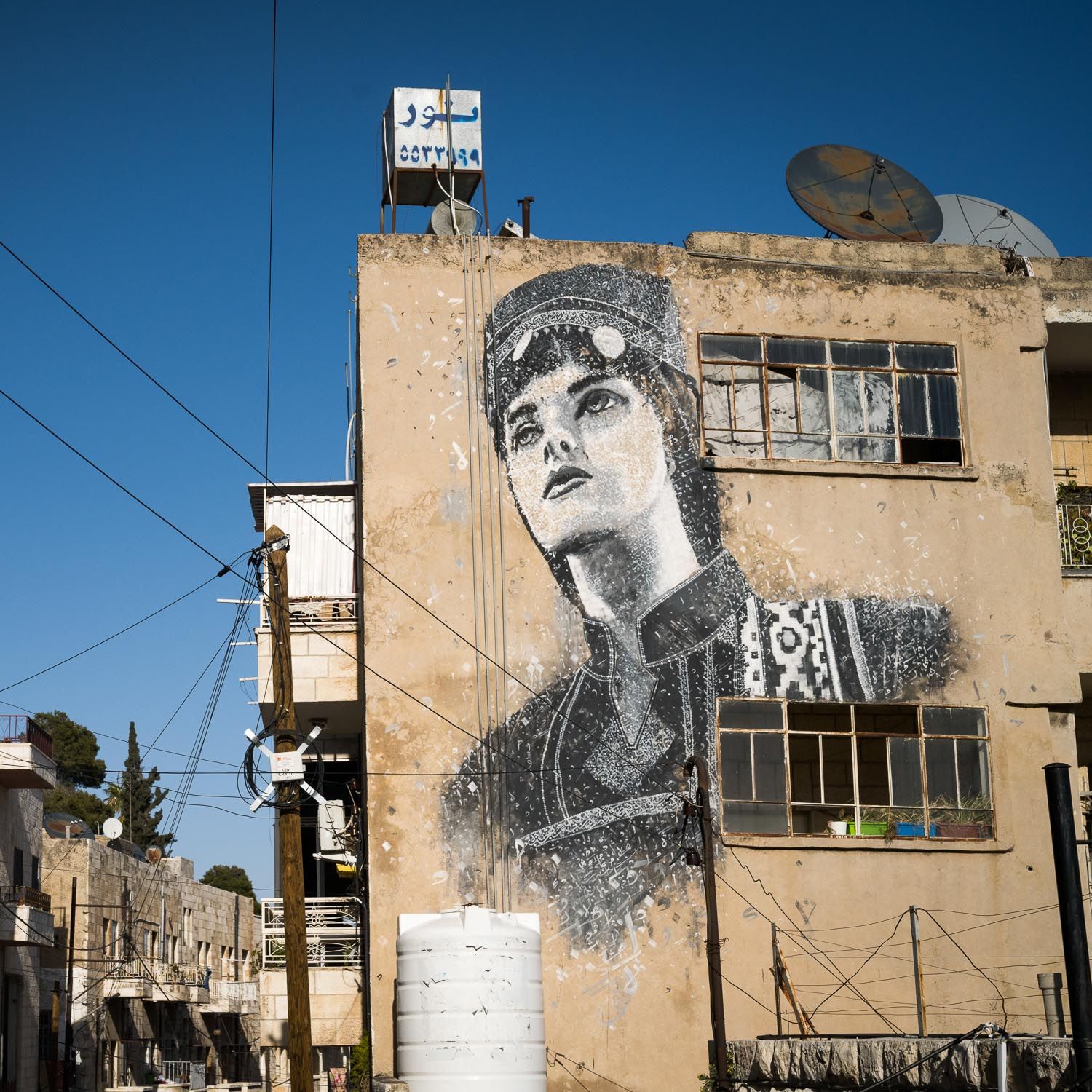 GRAFFITI TOUR
“This neighbourhood was the site of the city’s first art tour in 2015,” Shermine Sawalha, an artistic and social catalyst in Amman, tells me. We met in Jabal al Weibdeh, a modern, welcoming, and vibrant neighbourhood in the city, famous for its art galleries, museums, and range of cultural activities. Shermine is an art activist whose motto is “Educate through entertainment,” today, she is set to show us her favourites murals in Amman.

The graffiti and murals in the Jordanian capital have grown so much in quantity and quality that they are one of the city’s tourist attractions. So much so that several companies offer guided tours to discover and understand them with local guides. A perfect excuse to visit different places in the city and enjoy urban gems hidden to the naked eye.
We sat in the Rumi Café, named after the famous and erudite Persian poet. The atmosphere is 100% hipster. “Education is the key,” Amman-born, untamed globetrotter Shermine tells us. “In 2013, we started with different projects that greatly influenced the children and young people in the neighbourhood, who began to understand arts and culture differently. Those are the children and young people who today, ten, fifteen years later, have grown up and are the ones who paint the biggest murals in the city.”

“There are many more female artists involved in the street, which is great”

The neighbourhood and the city are now a museum of urban art. The graffiti and murals are painted on canvases of different shapes and sizes. Portraits predominate, especially of women and children. Many of them have messages written in Arabic. “There’s more push for Arabic-style art, and there are many more female artists involved in the street, which is great.” That’s right: you can tell there’s a powerful scene behind it. How do you think the murals have affected the feel of the city? “There are murals all over Jordan looking for a way to convey a message, to try to get people to think about it. We have worked on art projects on issues related to water, human rights, women’s equality rights.”
We went down with Shermine to the city’s skatepark, where a group of kids is training tricks. Right next door is the 7 Hills skateboard store, named after the seven hills of the city of Amman. We chat with the owner, one of the first skateboarders in the city. As he explains the workshops he gives to children and young people, I am overcome with the feeling that I am getting to know a genuine Amman, far from the clichés that I attributed to it on my previous visit.    ”Did you like the tour?” Shermin asks me later in a modern café in the city centre. Very much. I answer. I can finally say I found Amman’s hidden charms. 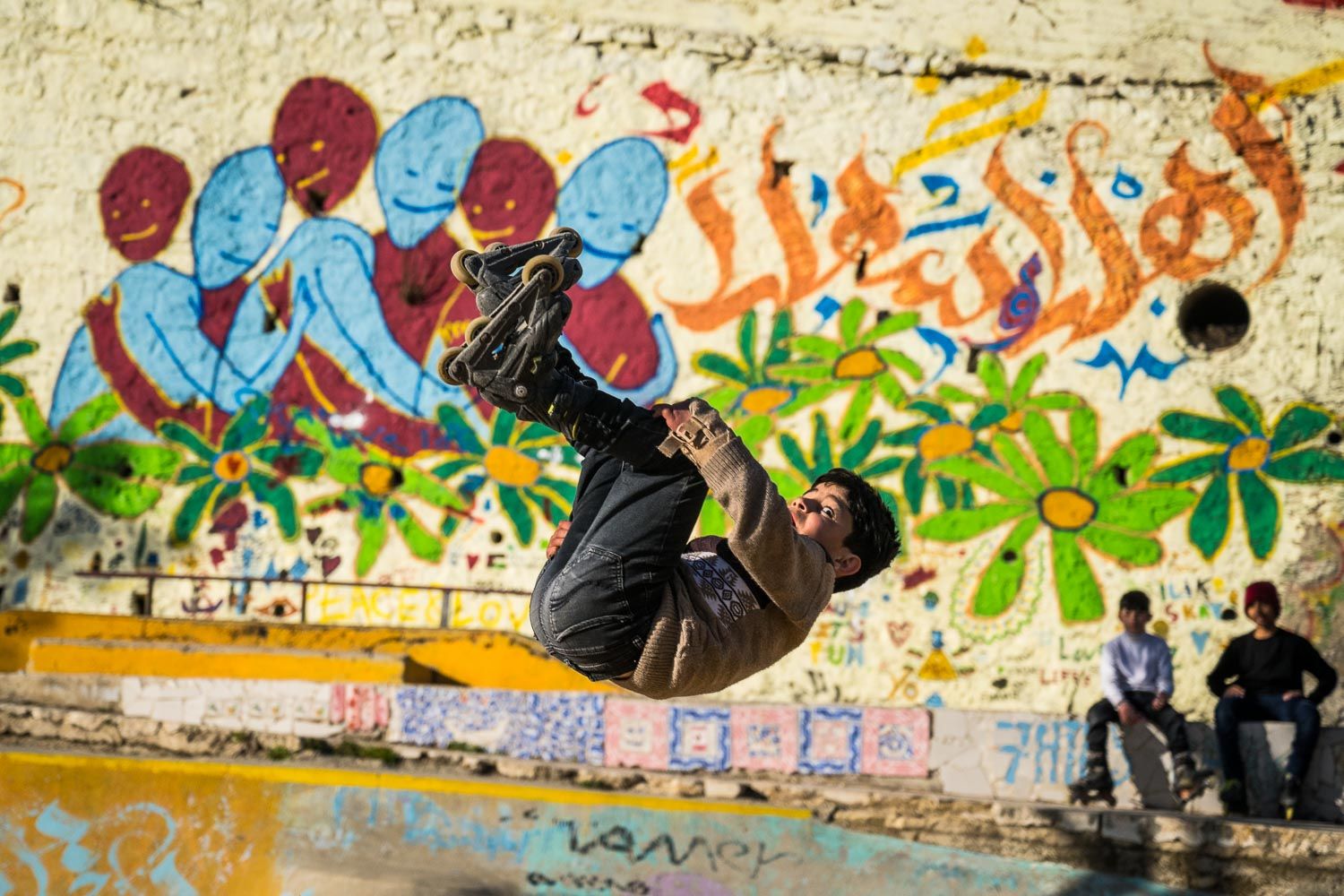 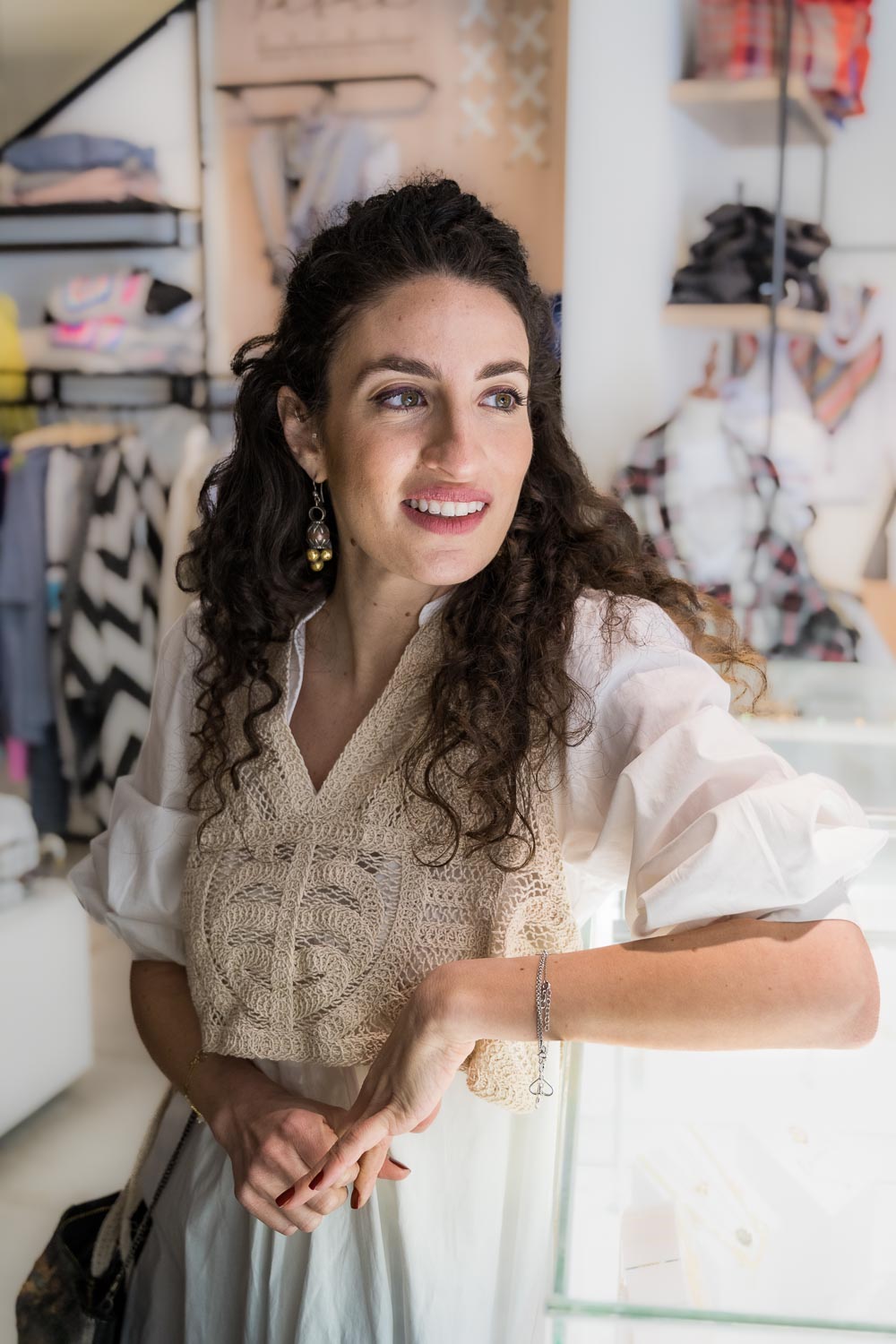 On the west side of the city, you’ll find the Sweifieh district: full of glassed-in buildings, walled embassies, and multi-storey villas. We enter a modern shopping mall searching for Dina Maqdah, a young designer who works for international fashion houses and organisations.

A boutique displays clothing, handbags and accessories, high-end jewellery, and costume jewellery. “They are all products that are the fruit of local talent. We try to bring designers and local producers together,” Dina tells us. “There has always been a heartbeat for fashion in the city, but it has developed a lot in the last decade.”

How does design influence the country’s image? I ask. “A lot!” exclaims Dina. “Design brands a country. It’s in everything: architecture, urban planning, photographs, or clothing. It’s the first thing you see and tells you a story about the country’s identity and culture.” And in Jordan specifically? “The design culture in Jordan incorporates influences of all kinds, which is a sign of the country’s diversity.”

Meet Anas, our guide in Amman, and discover the secrets of his city by his hand. Not only that: you will also support a project promoting tourism in Amman through unique stories that help local communities make their voices heard and benefit from tourism in Jordan.