Roaming the ruins of the Nakba
Sataf & Lifta

In the hills of East Jerusalem stand silent stone witnesses to what Palestinians call the Nakba, the Disaster. What took place here? And why do many Palestinians wear old keys around their necks?

Among the flowers and trees, on ancient, man-made terraces, stand the remains of houses and other buildings of the once thriving, millennia-old settlement of Sataf. When you close your eyes, you can hear the sheep and goats drinking from the waters of Ein Sataf and Ein Bikura, two still-flowing springs. Some six thousand years ago, the first shepherds came here to water their animals. And why leave a place with that precious moisture again?

Water at hand also means agriculture. Hence the terraces, the first of which were probably built by the Byzantines, as the Romans started to call themselves after the fall of Rome. This allowed water to flow from terrace to terrace to maximize the harvest.

ANCIENT KEYS
The view of East Jerusalem is impressive. But then why doesn’t anyone live here anymore? Why just those abandoned stones, slowly crumbling under the influence of the elements? And why do so many Palestinians wear old keys around their necks?

Our guide Shadi Kharouf is somewhat quiet. For him, these are painful questions. “Those old keys symbolize what we Palestinians call the Nakba, the Disaster. In 1948, Zionist forces attacked major Palestinian towns and destroyed some 530 villages to create the state of Israel. More than 750,000 Palestinians were driven from their homes. Most homes were destroyed, mosques and churches used for other purposes, and cemeteries plowed over.” 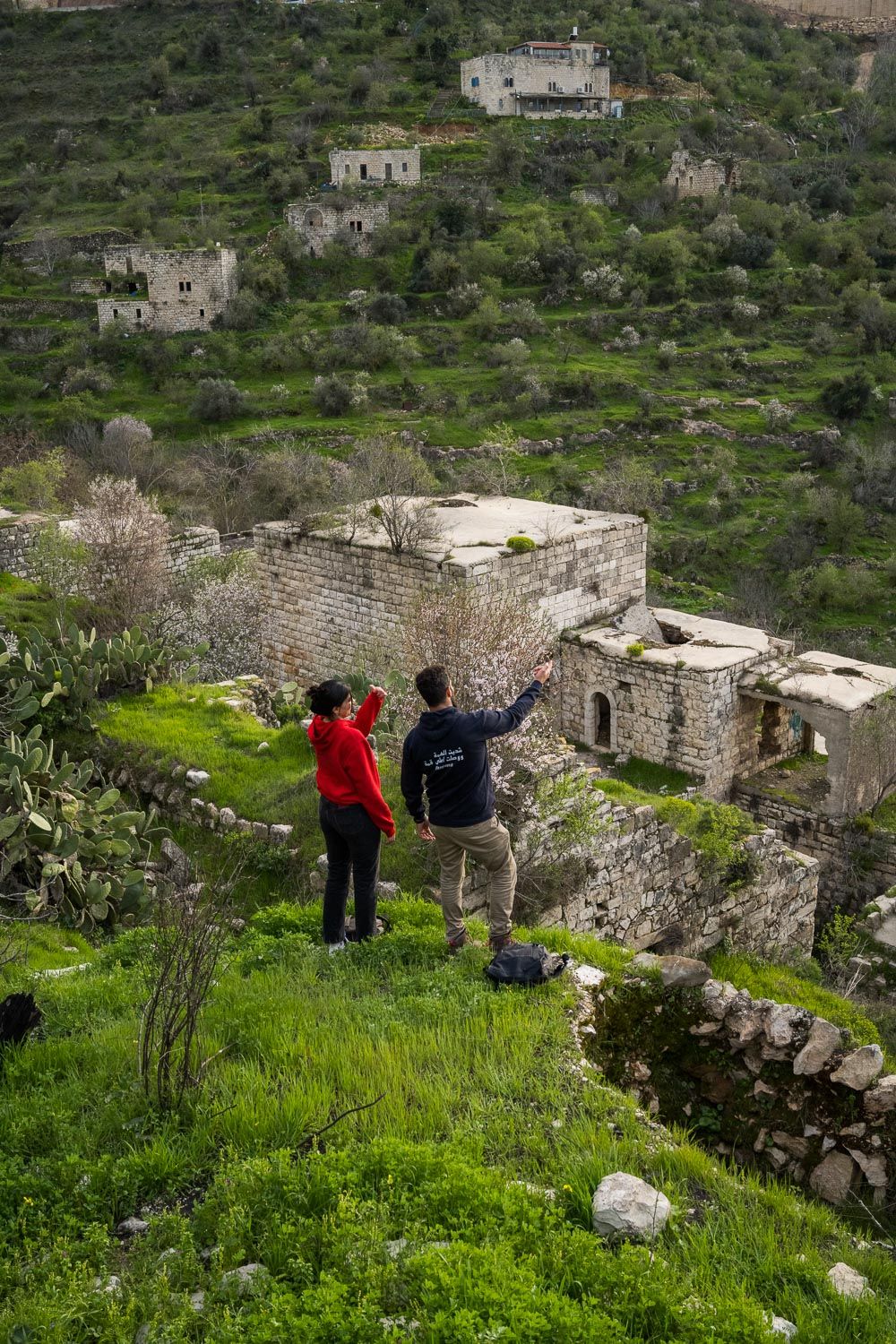 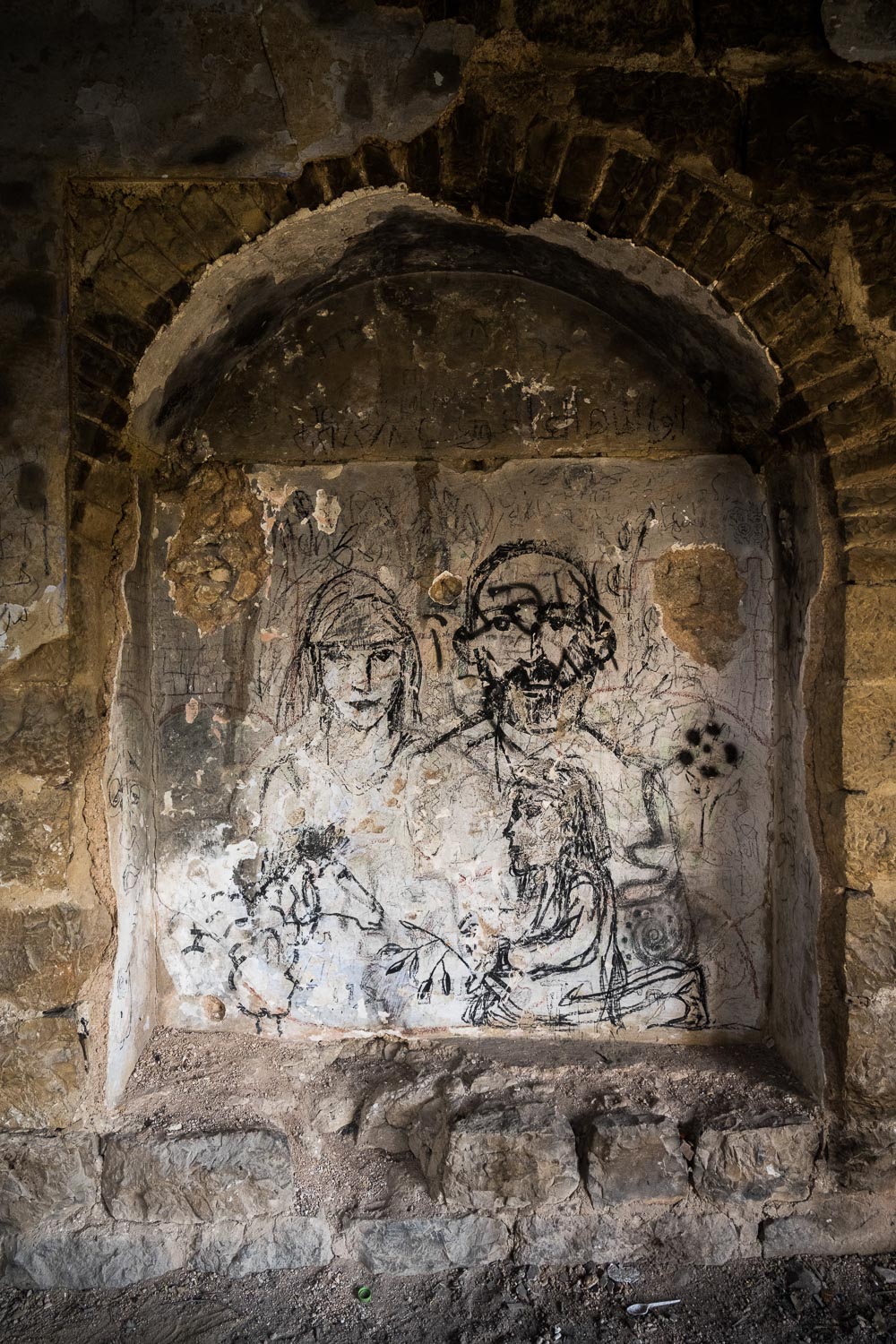 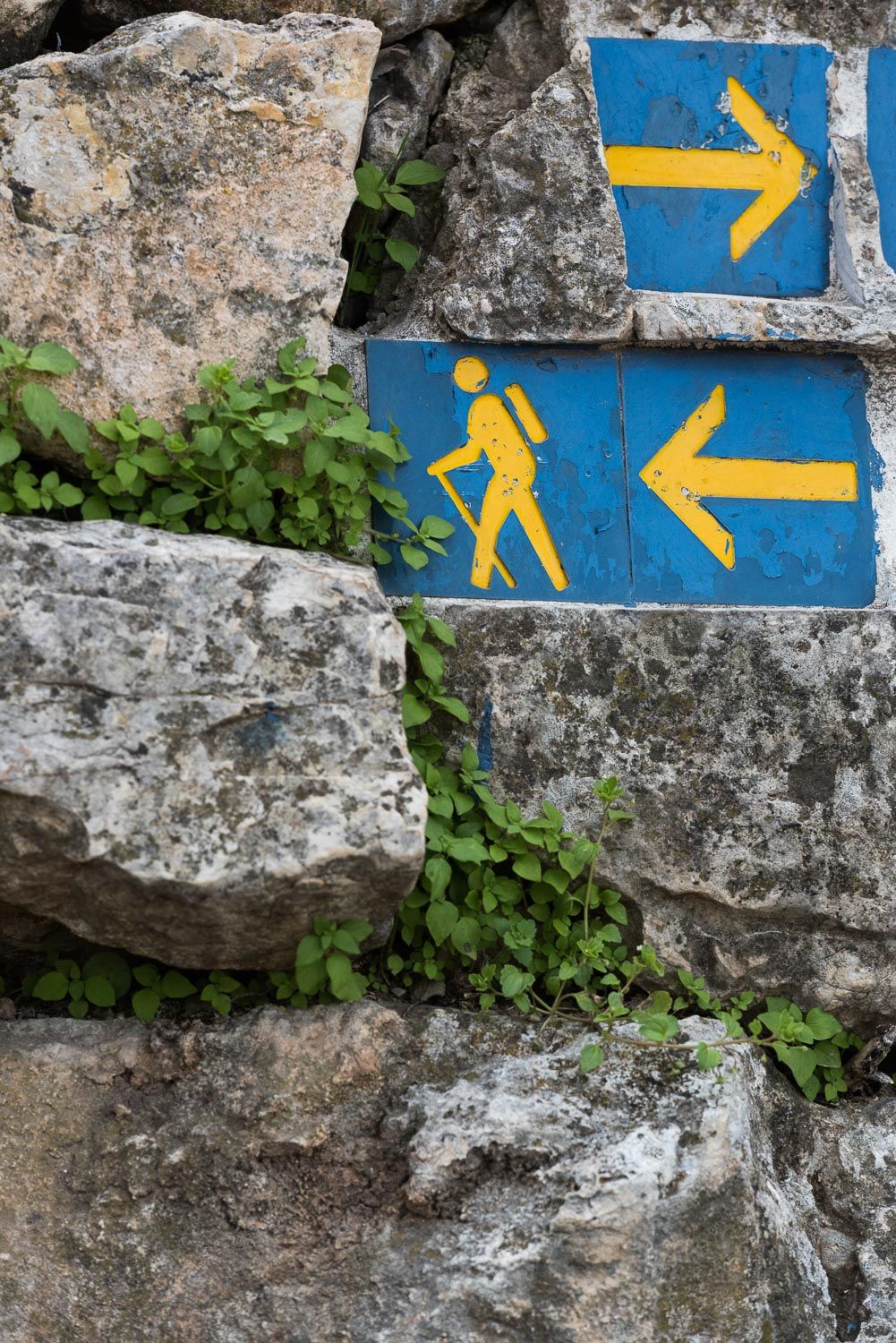 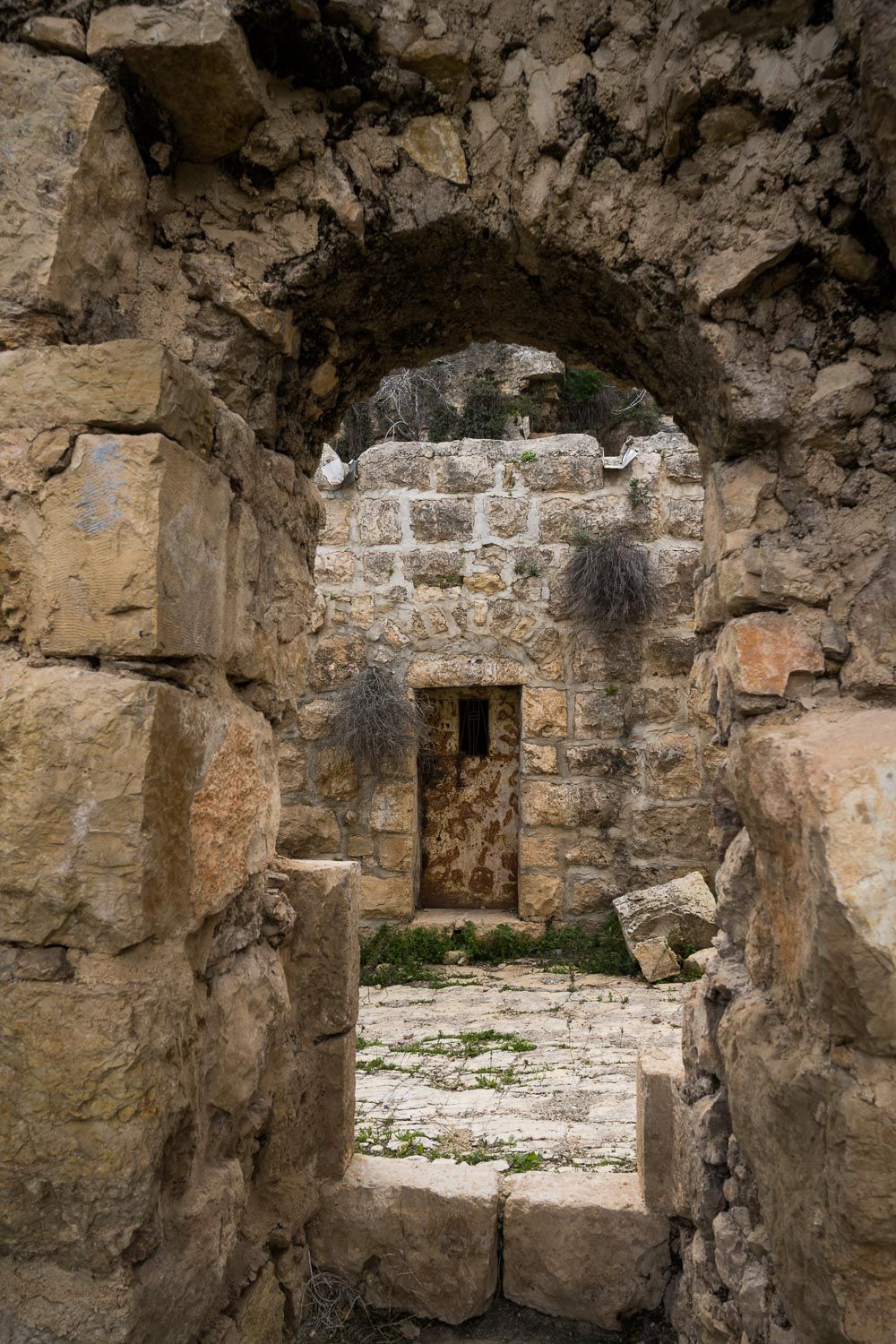 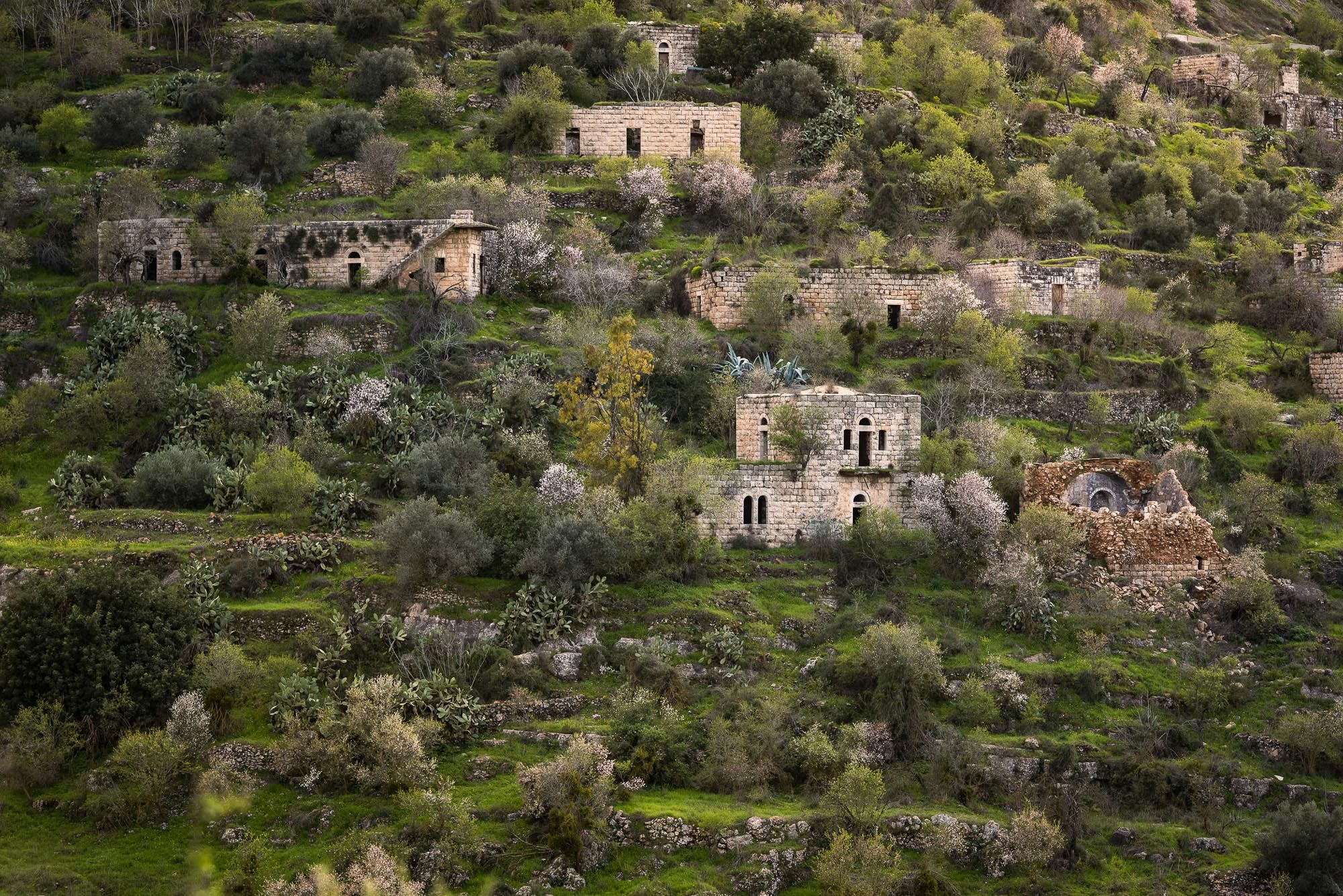 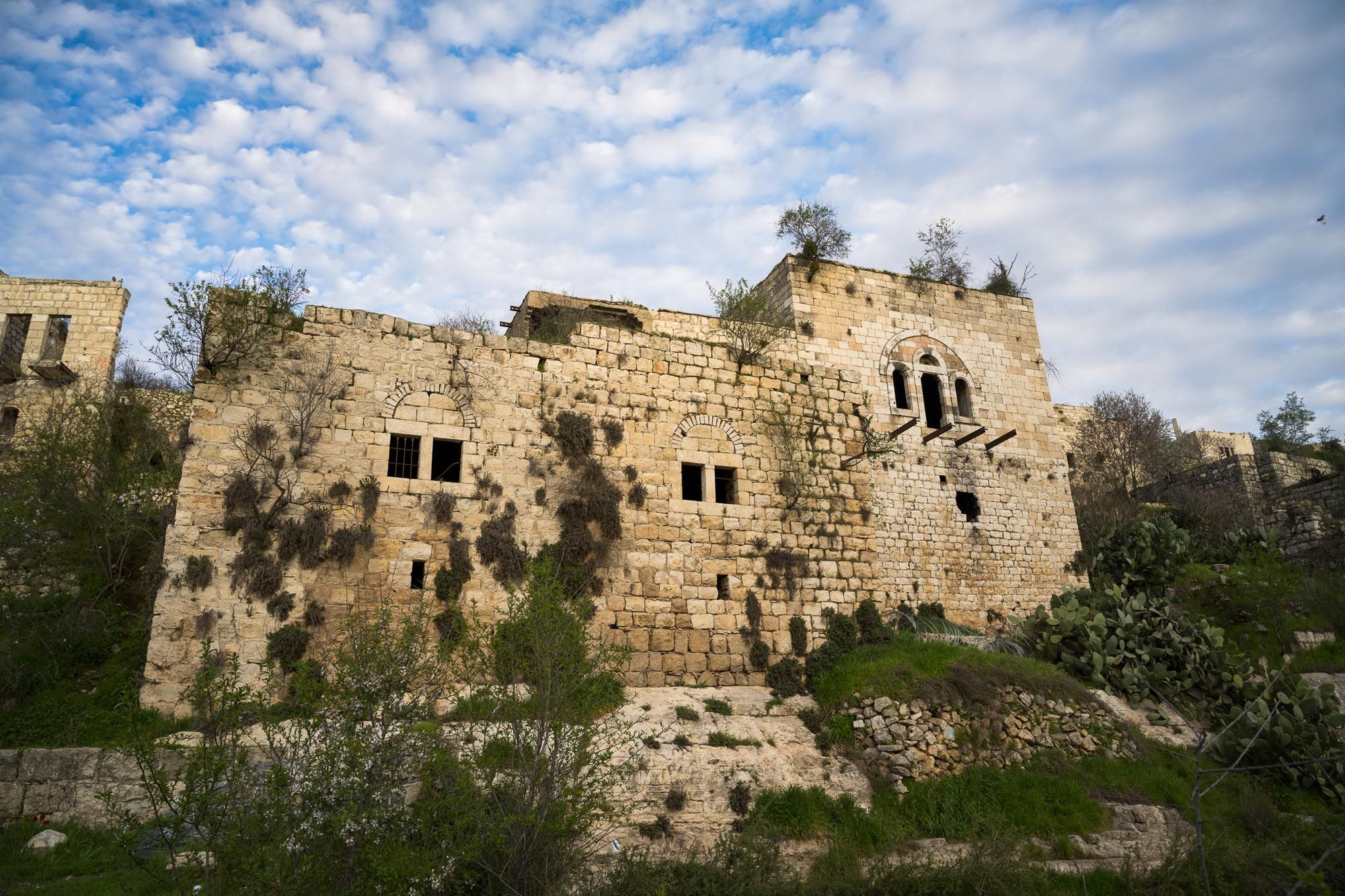 SILENT WITNESS
Many of those displaced Palestinians have carried their keys with them ever since. As a reminder of that final, fateful, terrible turn in the lock of their front doors.

“It would only be for a few days,” Sadi explains. “Most of them were convinced – or thought they knew – that after a week or two, they would return, open those front doors again and enter the homes that many had owned for generations.”

It was not to be. For Palestinians, the hill ruins of Sataf are both a silent witness to the Nakba and a symbol of the right of return.

LIFTA
A few kilometers away, we find another such silent witness. Lifta lies northwest of East Jerusalem. Small groups of houses scattered across the hills, their sandy bricks hidden among overgrown vegetation. Fragile poppies grow between rolls of new barbed wire. “While their former owners and descendants continue to live nearby, returning is not allowed, the buildings have been uninhabited for decades – and are now in danger of disappearing altogether,” Sadi says.

“Lifta was one of the first of 38 villages in the Jerusalem district to be forcibly depopulated in 1948,” Sadi continues. “The settlement dates back to the time of the Canaanites when it was known as Nephtoah. Before the Nakba, around 3,000 people lived in 600 houses in Lifta. According to displaced Lifta residents, only 73 houses remain today – 56 of them quasi-intact and 17 ruins.” 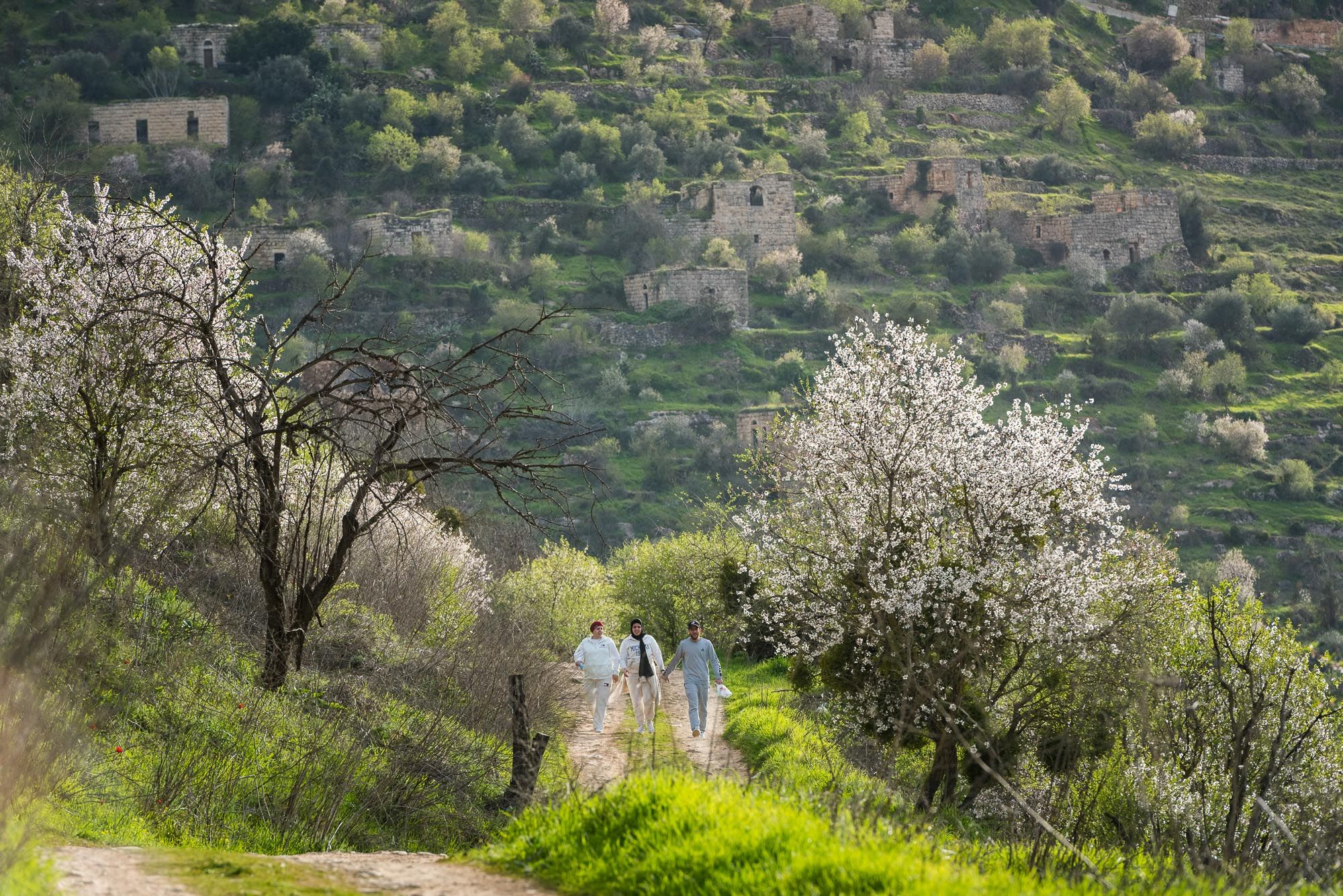 MEMORIES
Yaqoub Odeh, born in Lifta in 1940 and now the head of Lifta’s cultural heritage protection committee, is one of the most knowledgeable sources and eyewitnesses on the village’s history.

It is now more than 70 years later. But Yaqoub still vividly remembers the circumstances of his forced departure from Lifta. “When I left Lifta, I was in second grade,” says Yaqoub. “I still remember how I jumped from one rock to another on my way home from school. I also remember how I hung out with the other children at the water source in the village.”

When Zionist militias sealed off the village in March 1948, it prompted Palestinians to evacuate women and children to nearby caves.

THE FLIGHT
“My father had my little sister on his shoulders, holding my little brother’s hand,” Yaqoub recounts. “He asked my other sister and me to run after him. Shots were fired at us. Within an hour, we went from house owners in our own village to refugees in other people’s houses. We left our homes with nothing but the clothes on our backs, thinking we would return the next day. It has been 74 years since that day.” 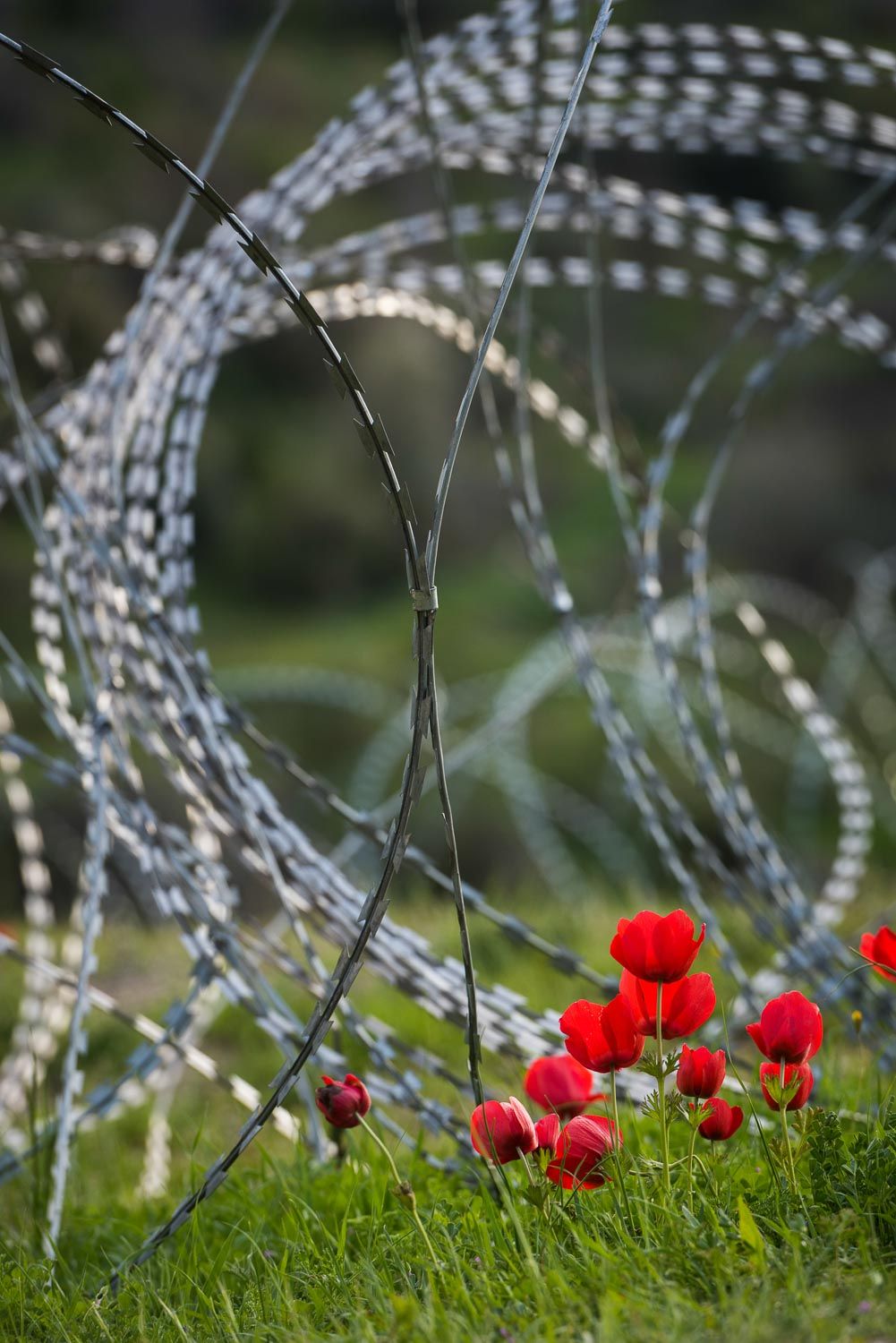 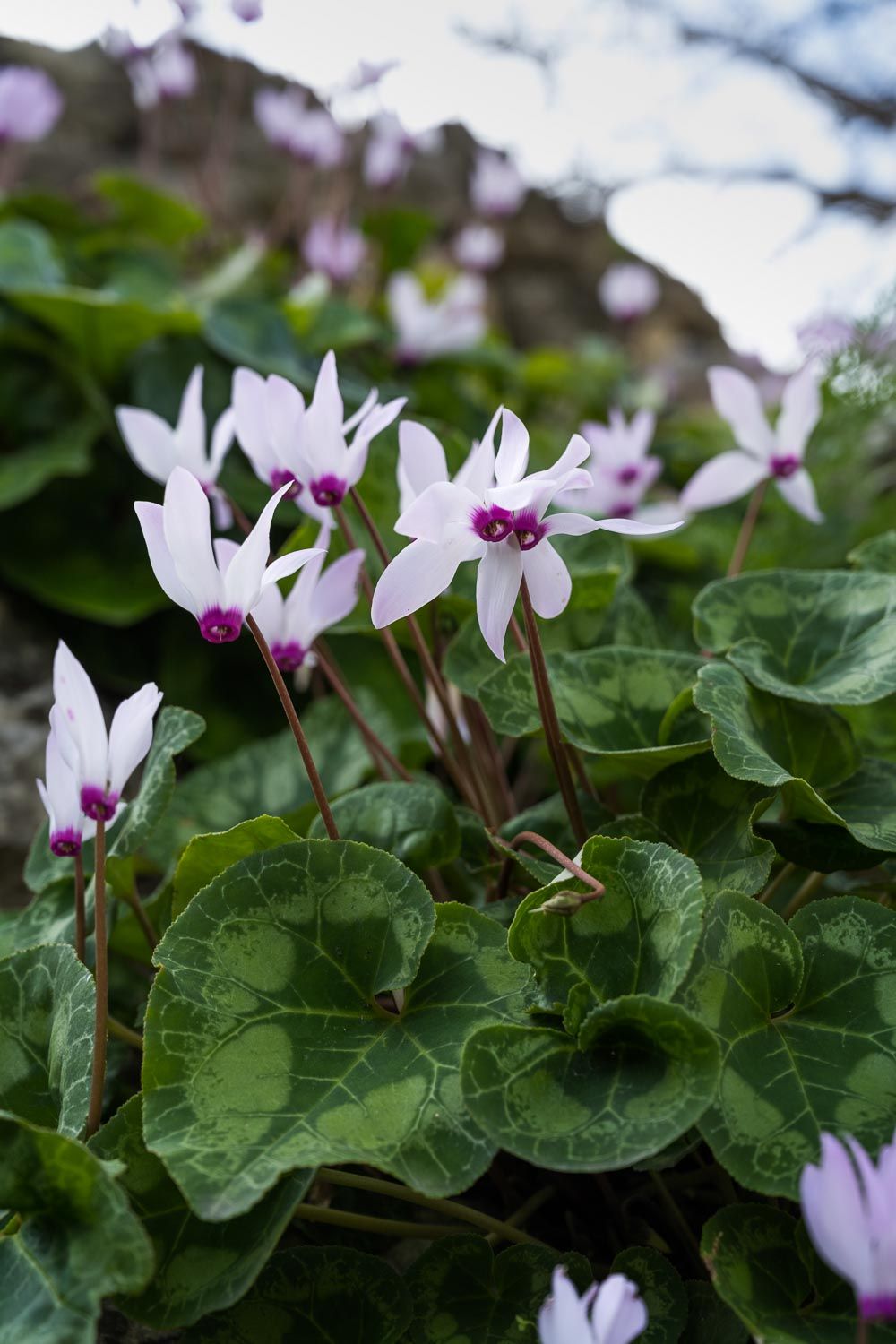 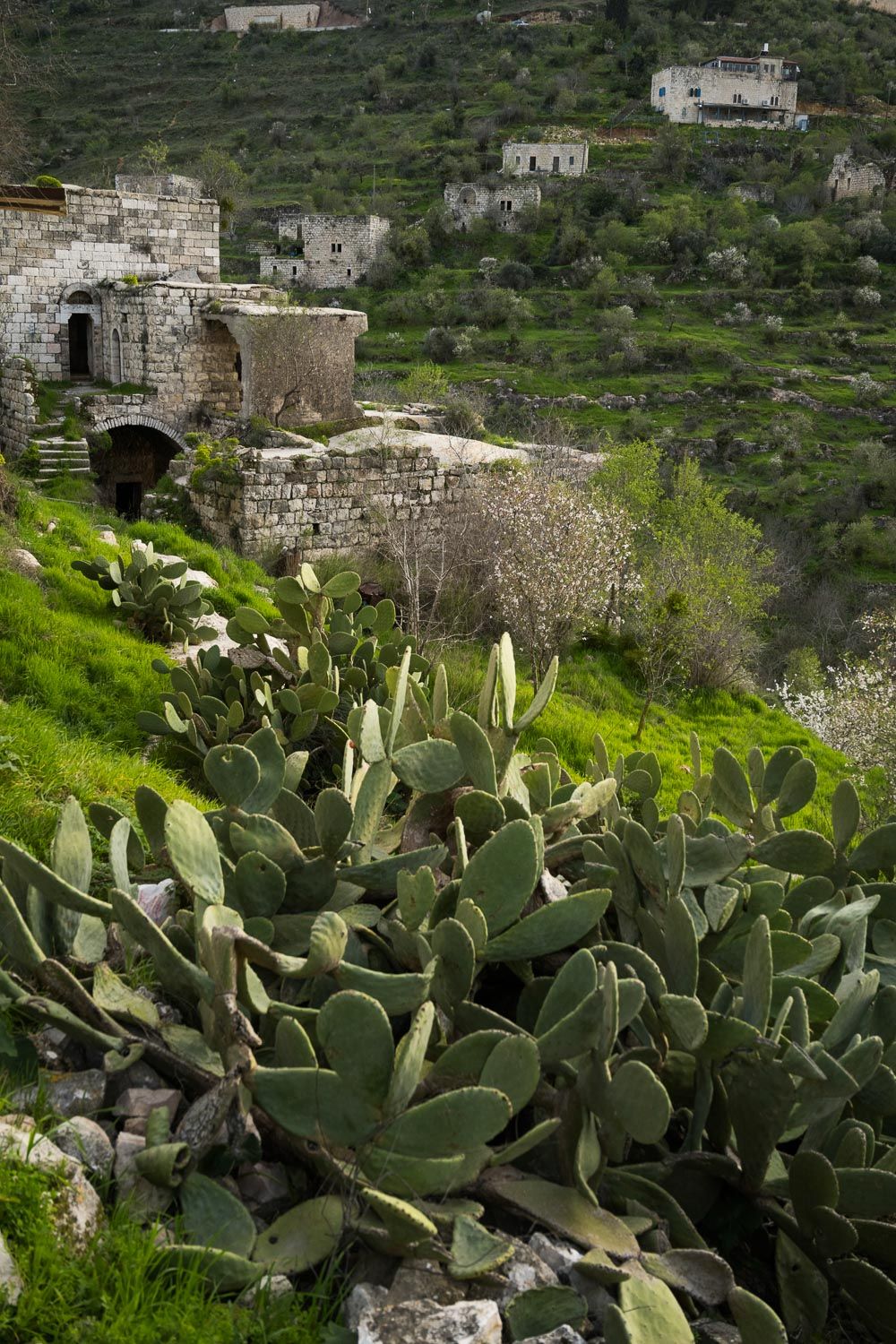 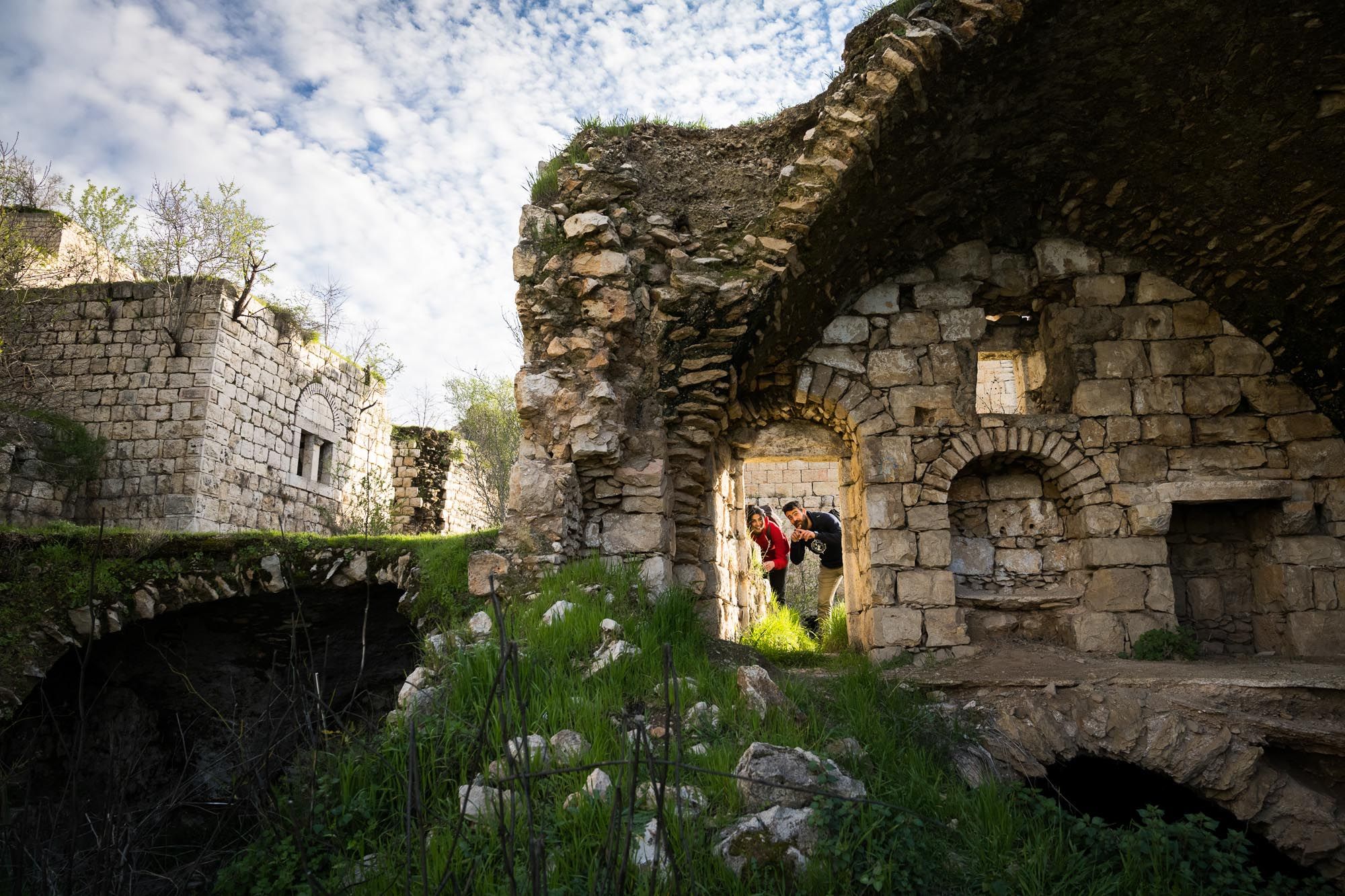 WORLD MONUMENT FUND
“Although the area was declared a nature reserve by Israel in 2017 and listed as endangered heritage by the World Monuments Fund in 2018, there are Israeli plans to develop it,” says guide Sadi. “It is being touted as a plan for 250 residential units, hotels, and commercial centers, all with stunning views of Jerusalem’s hills. It would mean the demolition of Lifta’s remaining houses and monuments.”

Thanks to the activities of the progressive Israeli organization Zochrot, which aims to raise awareness of the Nakba, Israelis today are a little more aware of the Disaster that occurred during the 1948 war. But whether it is enough, and in time, to save Lifta? 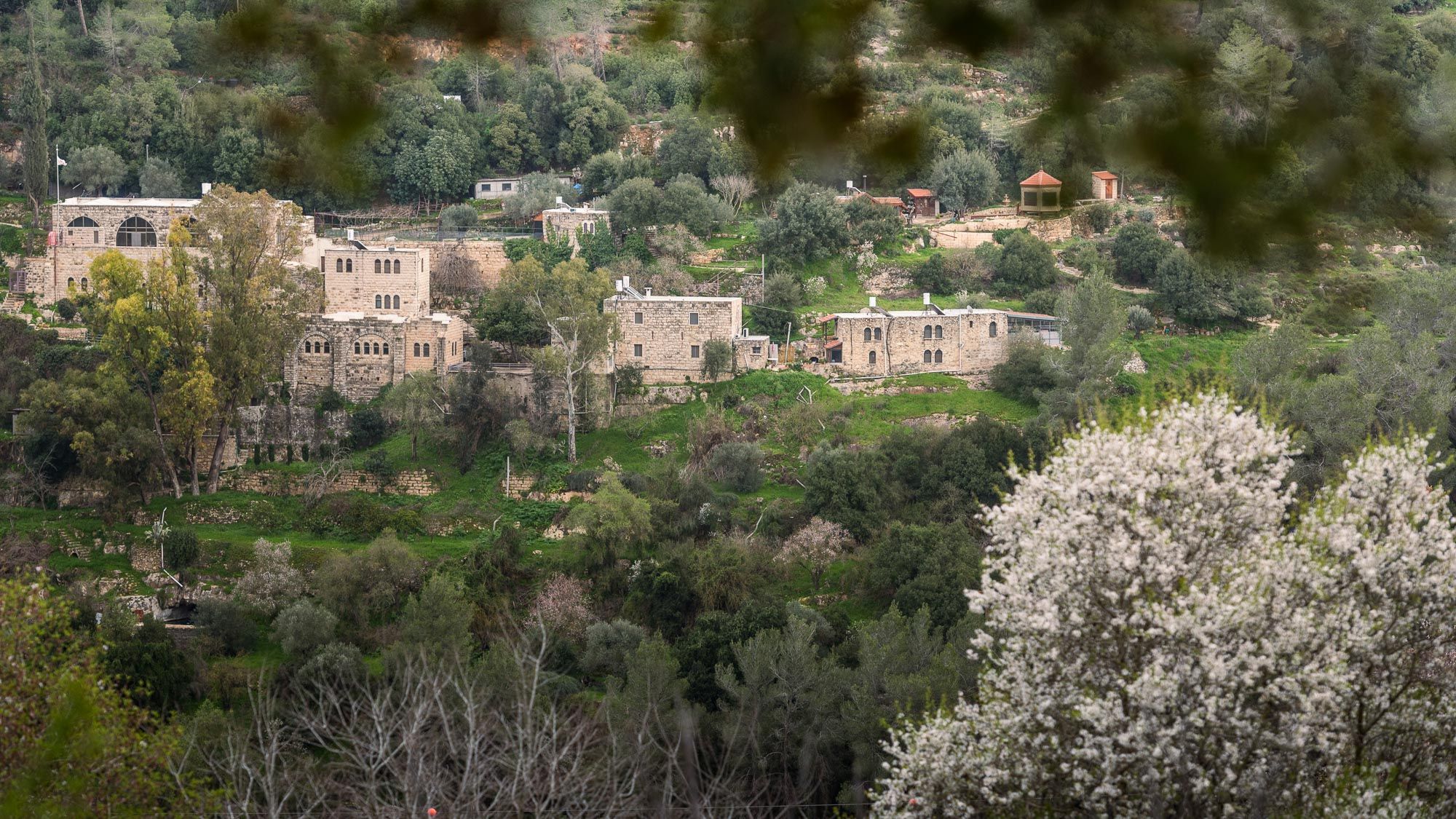 The keys to the Nakba  Palestinian Displaced Villages