Halfway between Oslo and the Arctic Circle you’ll find the most fertile region of Norway: Trøndelag. Besides long gazes over visually enchanting fjords and beaches, your taste buds will be road tripping via microbreweries, mussel farms, cheese makers and chefs who put pure Norwegian flavours on the table. Sometimes spread over as many as 22 courses.

Matured lamb slices and edible flowers on a juicy piece of melon or fermented rapeseed spaghetti with a splash of oyster. Chef Heidi Bjerkan puts these two starters on our table in her gourmet restaurant Credo, which she founded 20 years ago. She cooks only with local, seasonal ingredients. And it works; the restaurant is high on lists such as the ‘White Guide Nordic’. Recently the restaurant moved to a former warehouse just outside the centre of the provincial capital Trondheim. Apart from the iron beams and concrete floors, the vegetable gardens, both inside and outside, really stand out. Beside the bar, for example, tropical papayas and lemons grow. The distance between the garden and the kitchen cannot be shorter.

Heidi plays with unfamiliar flavours that she obtains by fermenting, acidizing or smoking, which yields so many different taste discoveries that after twenty starters and main courses, we are still curious about the dessert. Only after the rhubarb and cream puffs, just after midnight, do we meet the proud chef, who says she owes her fame mainly to her local suppliers.

After a night in Trondheim, in the hotel that won the title of ‘best hotel breakfast in Norway’ for the tenth time in a row, we decide to make this journey in Trøndelag a culinary quest; in search for the makers and growers of the flavours of the region. 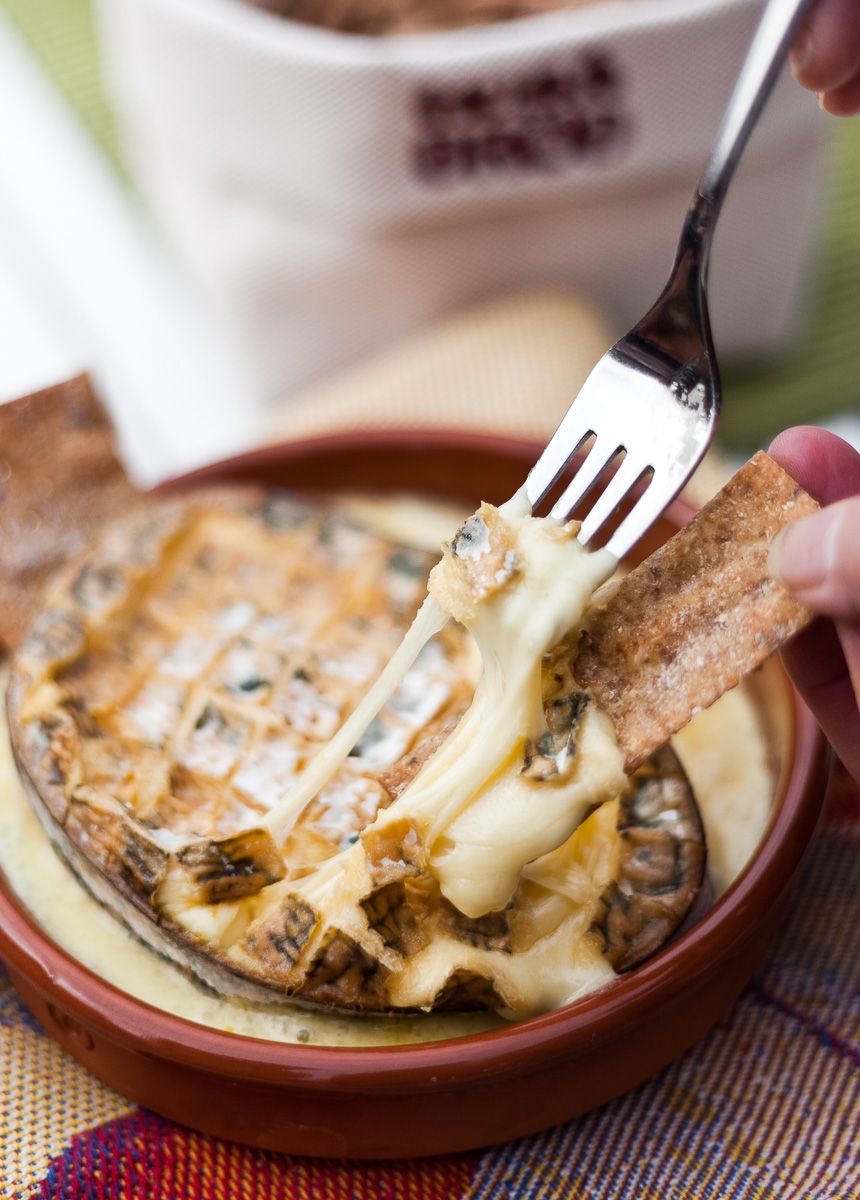 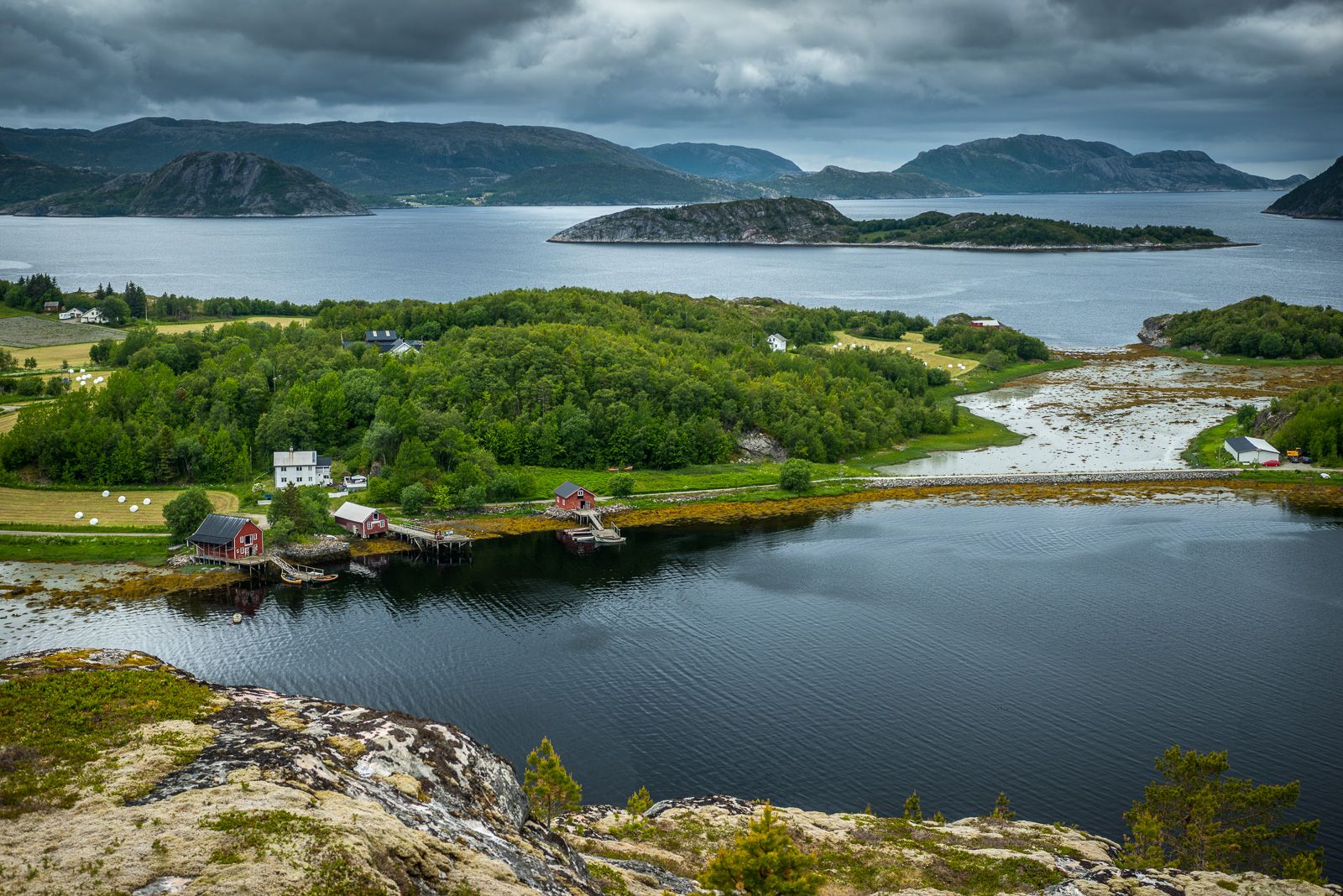 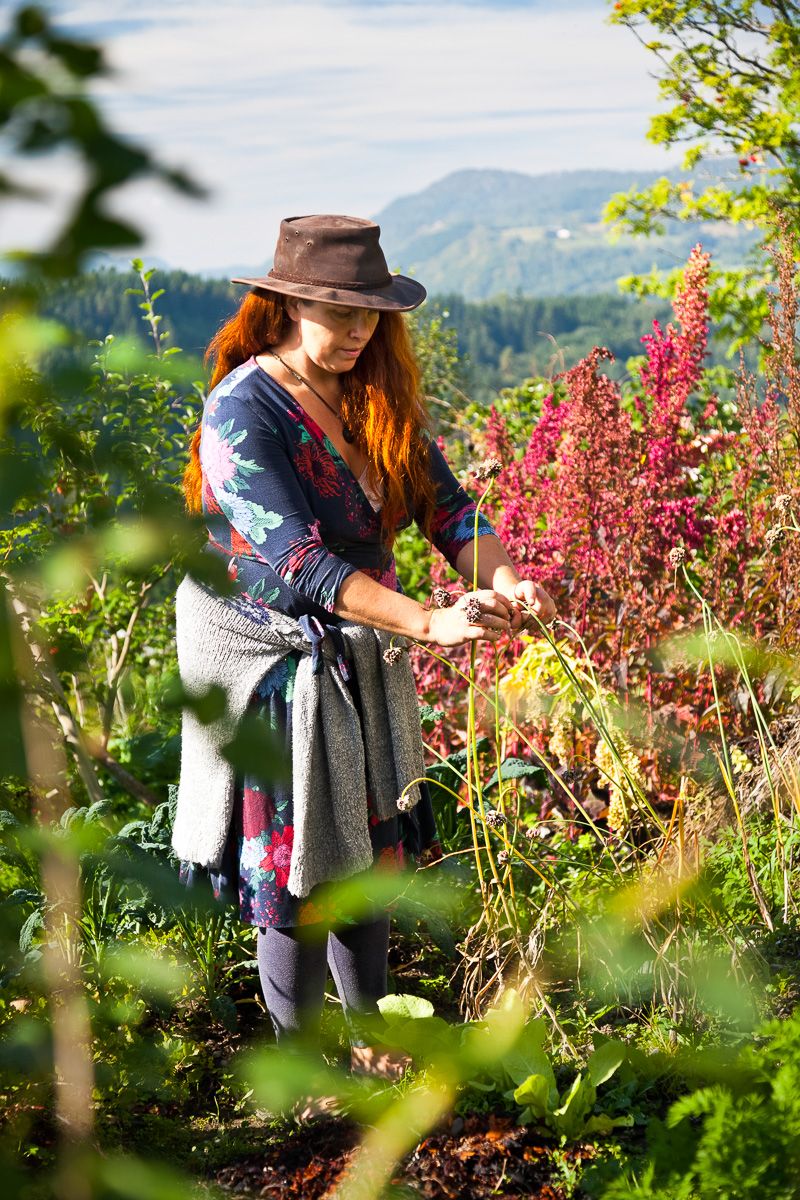 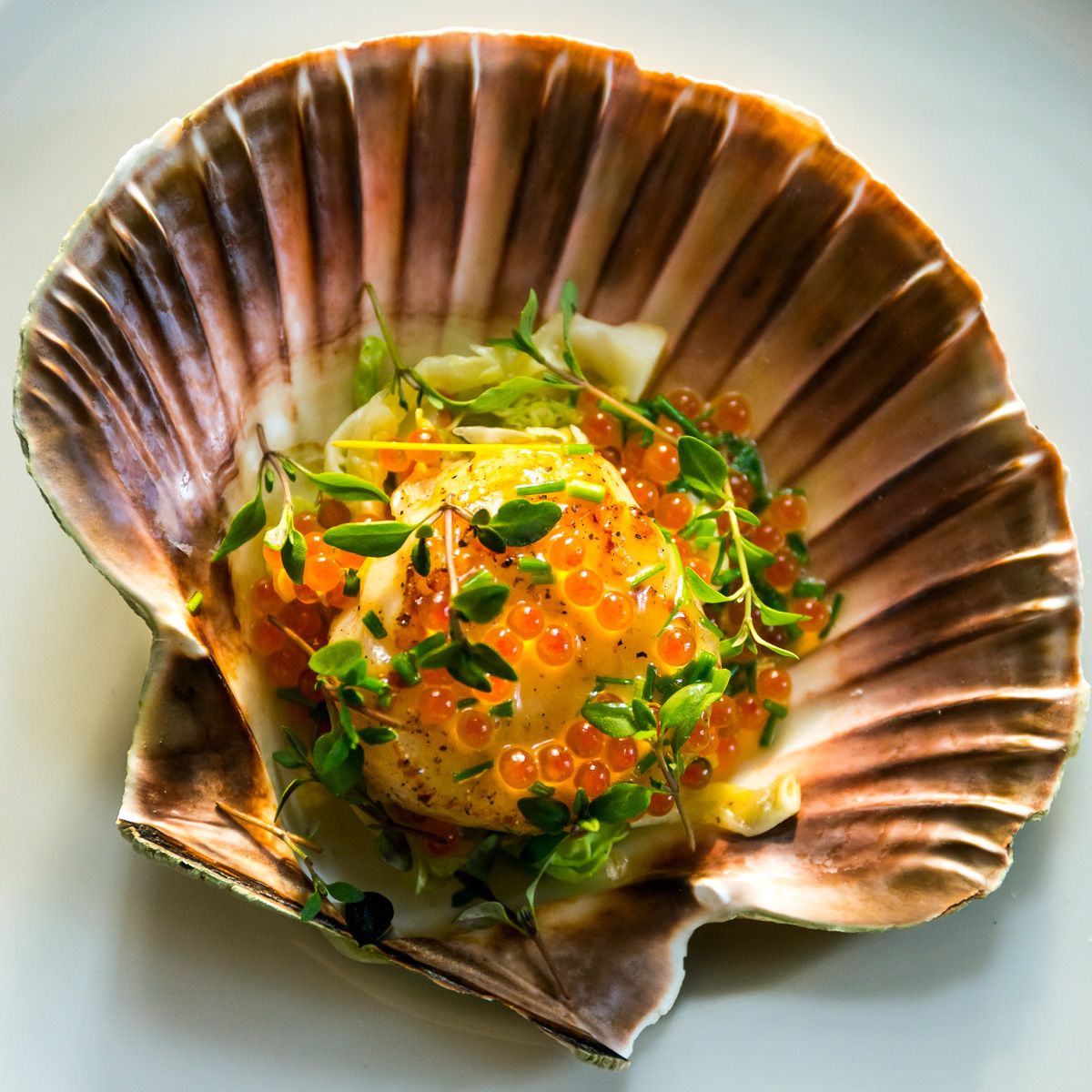 On a sunny slope just outside Trondheim, we meet Elin Östlund. Her henna-coloured hair, leather hat and colourful clothes make her the perfect photogenic farmer from Norway. Beyond the beehives and edible flowers, grow artichokes, beets and turnips. “Taste this white flower,” says Elin as we stroll through the mud.”

“The leaves taste like onion. We grow the vegetable biodynamic, so without artificial fertilisers or pesticides, which is difficult, because our climate is becoming more extreme. Last summer it rained three times a day instead of once every three days. But we are inventive. Look,” she says as she points to the white stuff around the cabbage. “The sheep wool around it keeps snails at a distance.”

The sheep wool around the cabbage keeps snails at a distance

FLAVOURS ALONG THE ROAD
After a night in one of the three rooms on the first floor, we follow the road that shows us every inlet of the vast emptiness of Trondheimfjord; Rolling hills with wooden, rust-coloured farms, panoramic views over the fjord and the boathouses next to it, pine trees which cover the banks by the thousands and reflect in the water.

A few kilometres from that water we taste the flavours of Trøndelag. Like the cheeses which the five monks of the Munkeby Mariaklooster, a Cistercian monastery from 1180, make and sell. And at Arve and Liv, we eat the bread that they bake daily. They do this in their Gulburet farm, which is Norwegian for yellow storage and refers to the colour of the former granary which now houses their farmers’ boutique and café.

Their sandwiches are overloaded with soft camembert, plums, apricots and violets. And Liv lets us taste flatbread, a wafer-thin bread the Norwegians prefer to eat with soup or stew. 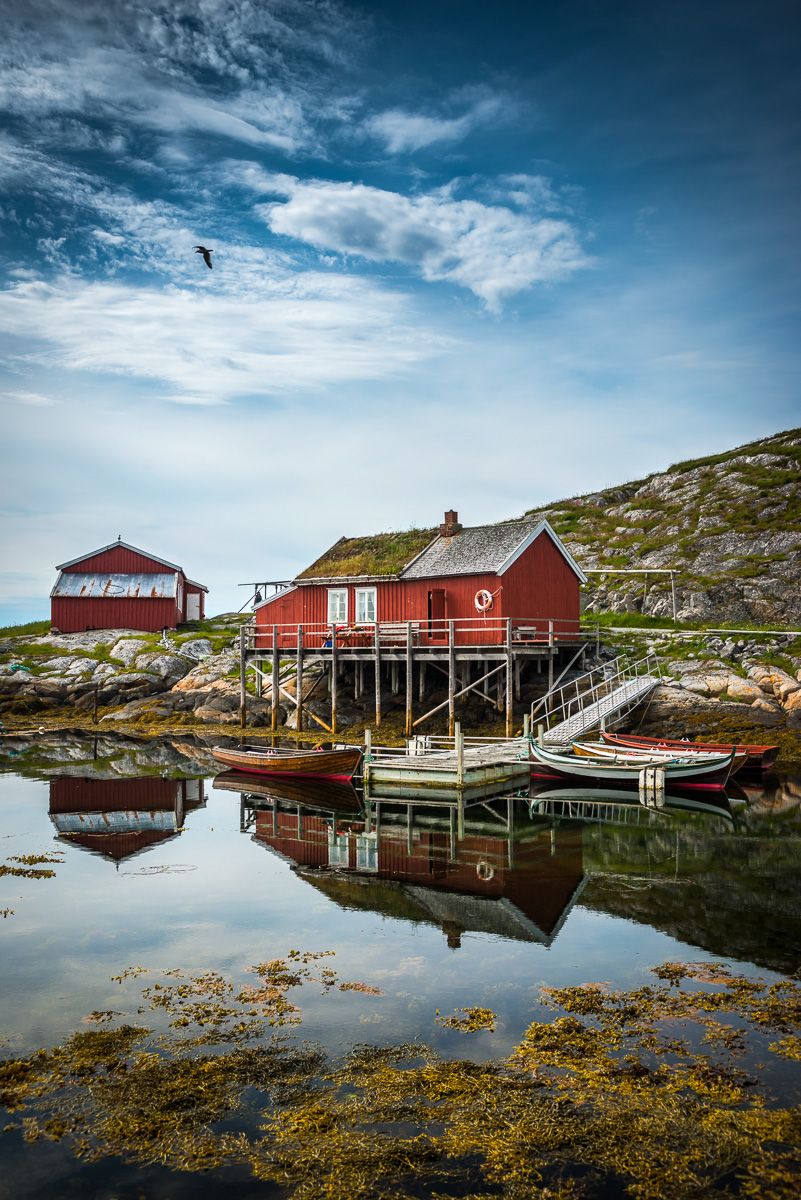 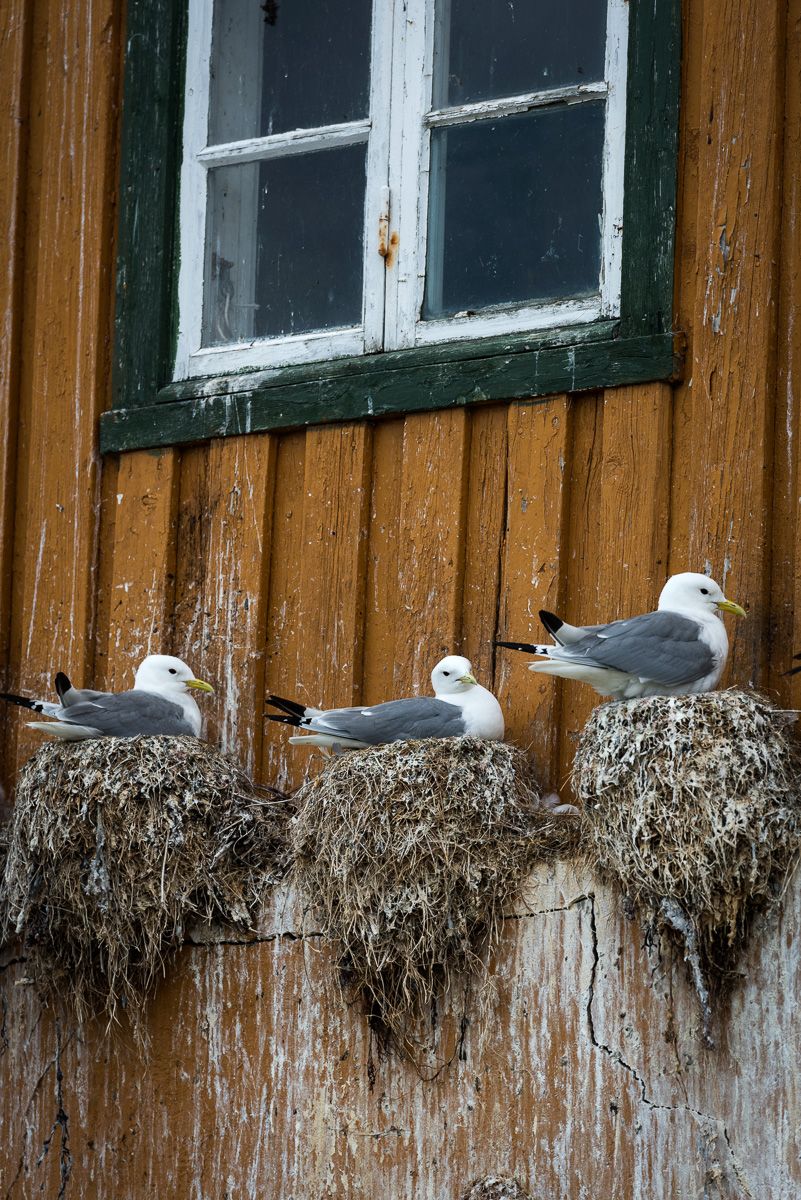 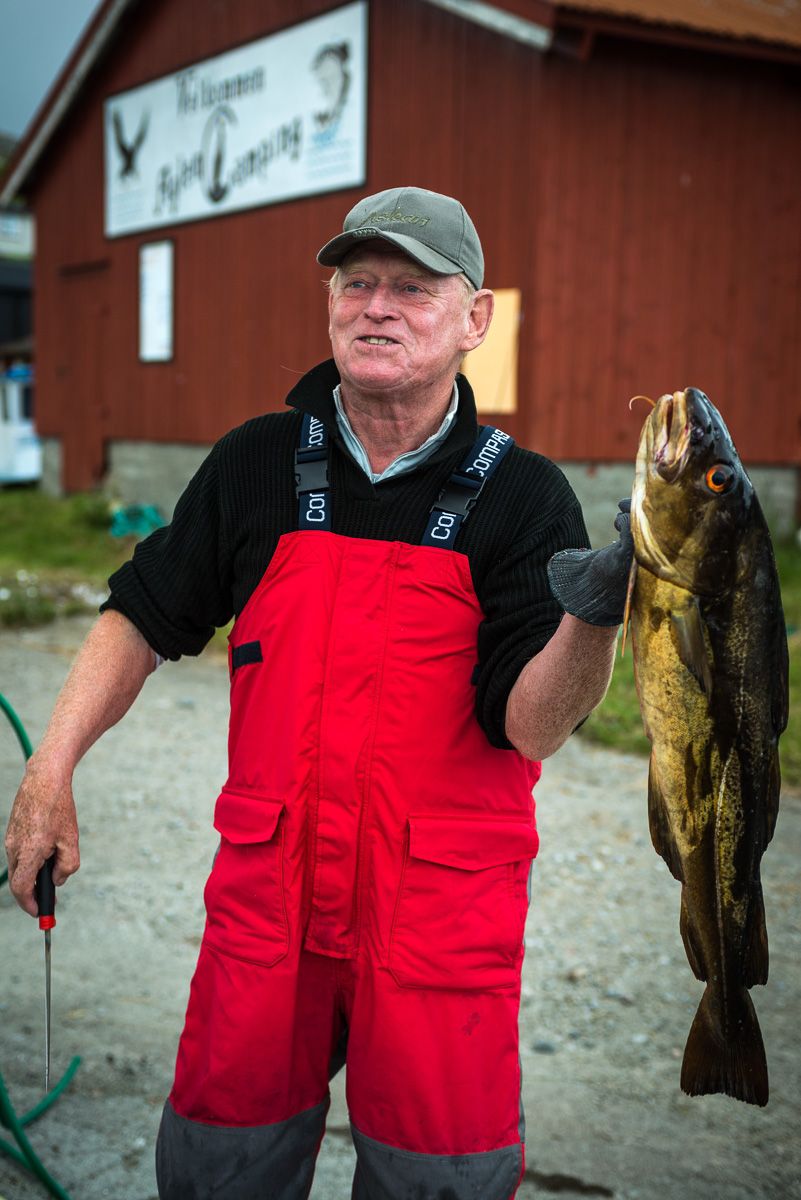 SKÅL!
We head for Tautra, an island right in the Tronheimerfjord. Norwegians have been brewing beer for 3,000 years. On the tiny island of Tautra, there is a sheep herd, some wooden houses, a monastery and microbrewery Klostergården. Norwegians have been brewing beer for 3,000 years. When we arrive, we meet brewer Per Jostein. Klostergården is a monumental building with three rooms for guests, a restaurant with brewing kettles.

Per, standing at our table, tells us that Klostergården brews 60,000 litres a year and recently won a silver medal at a beer competition in Berlin. He serves us a range of beers accompanied by smoked salmon, cheeses and other goodies. “In Norway, we eat and drink nature,” he says while he makes us happy with tiger beer, beer with a variety of smoked hops, “Skål, on Norwegian nature!”.

“In Norway we eat and drink nature”

THE GOLDEN DETOUR
From Gulburet we continue to follow the 761, a winding provincial road with the nickname ‘the golden detour’ because of all the divine dishes and products that you pass by. So, ten minutes later we turn into the farm at Gangstad, Norway’s first dairy farm that makes cheeses from the milk of its cows.

The farmers have also been making ice cream for some years, for example with local foxberry and liquorice. The golden detour then takes us into the woods. With the smell of pines surrounding us, we suddenly find ourselves face to face with a moose. It frazzles the moose even more than us. And of into the woods, he rushes.

Finally, we arrive at the marina of Kjerknesvågen. The doors of a shipyard are open, as are those of a café, but there is no one else there. A faded lifebuoy on the outside wall confirms that life is slow here.

The asphalt between the port and the village of Ärnes is primarily claimed by sheep. They are everywhere on the road and do not seem to be bothered by traffic. But even if they were not here, there is no reason to drive fast on this mountain road. The views, over mountain lakes, bays and coves, require us to take it easy. 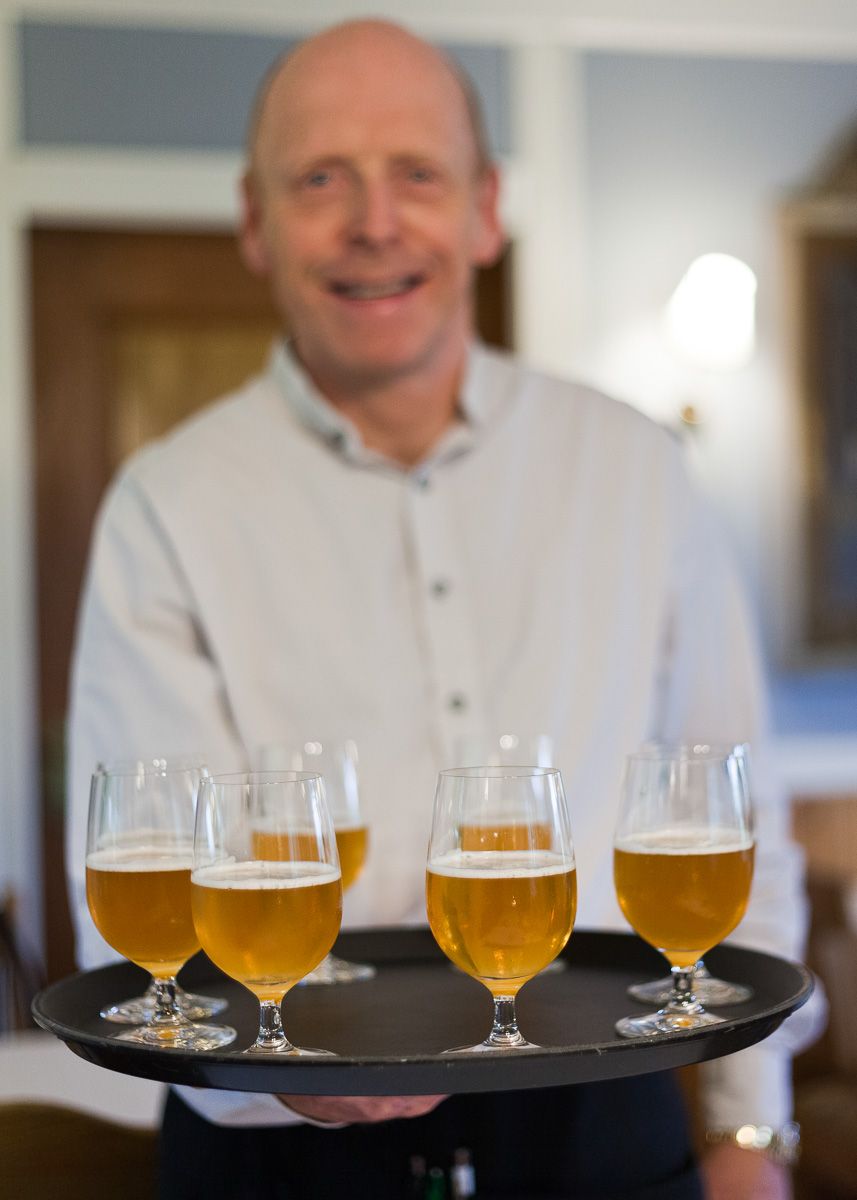 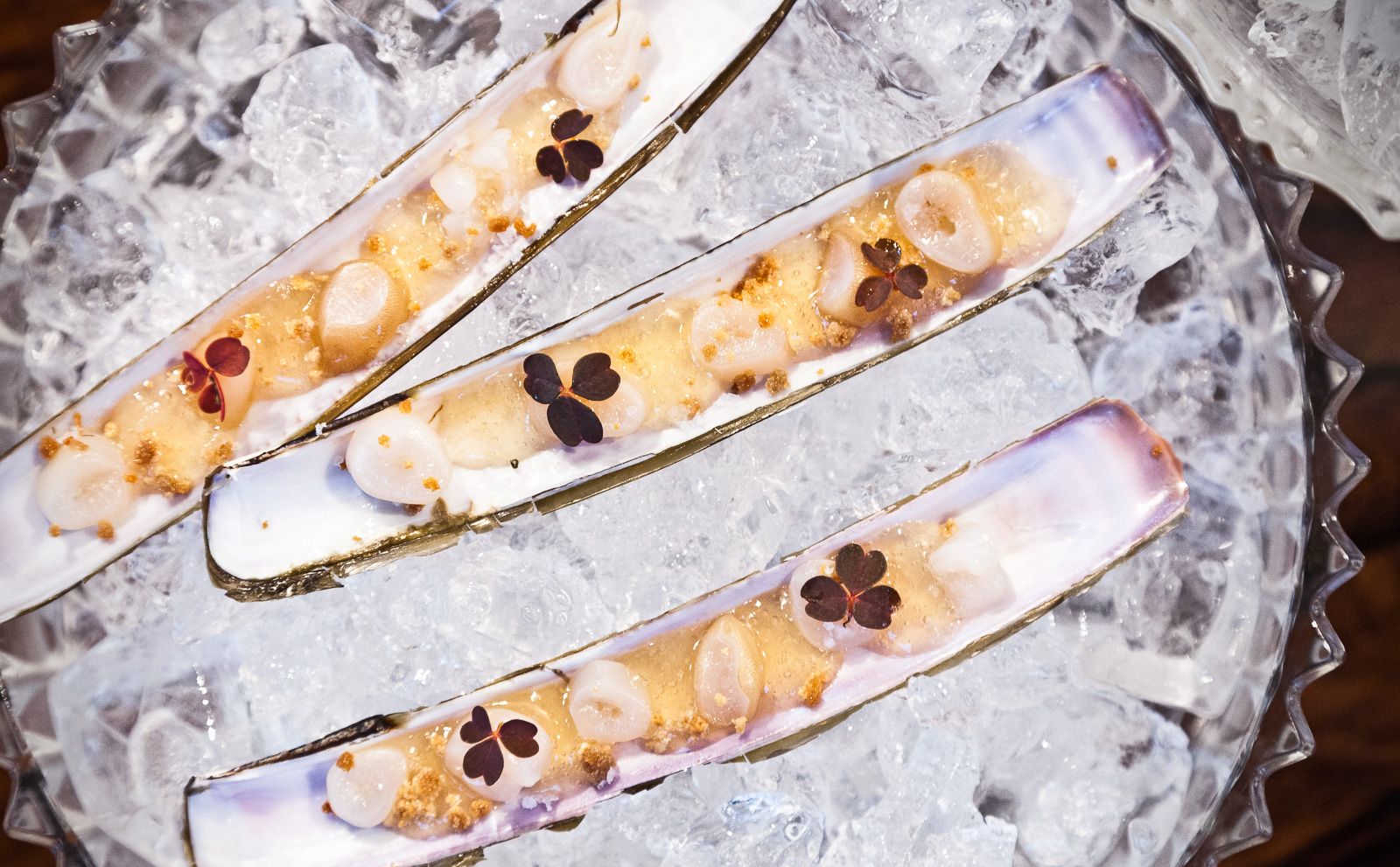 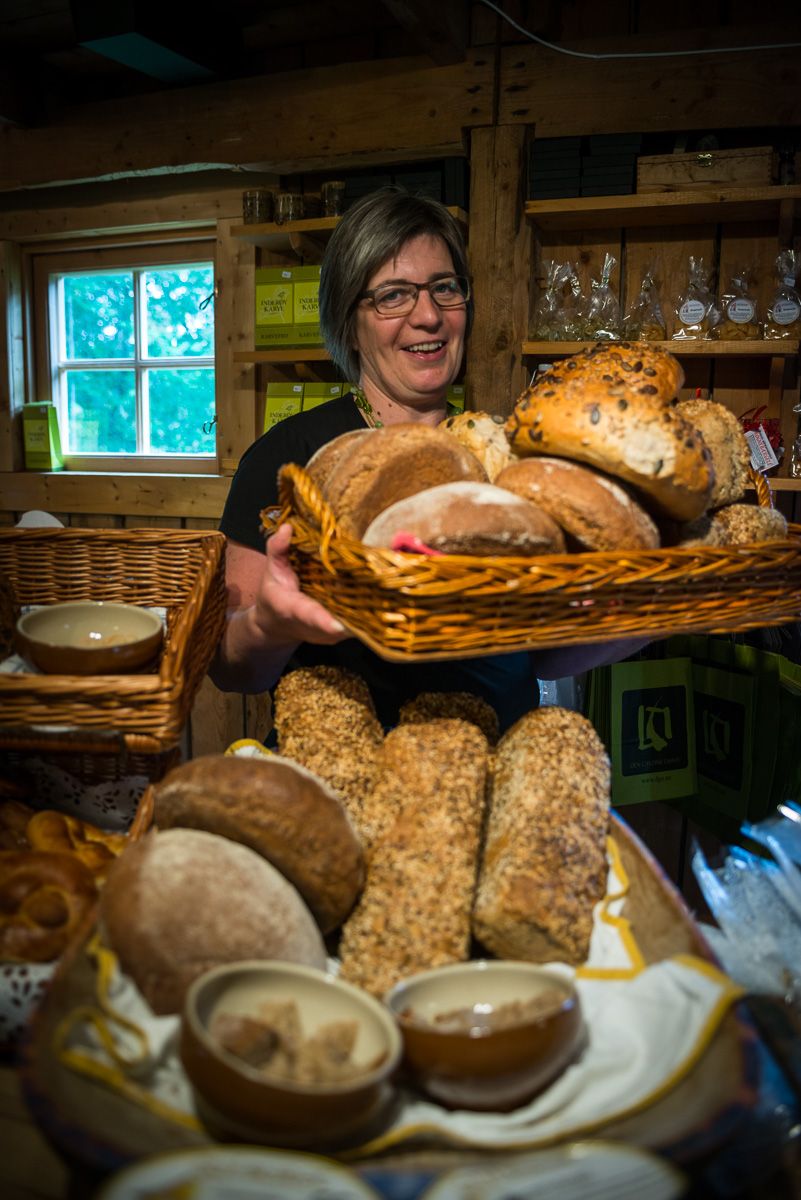 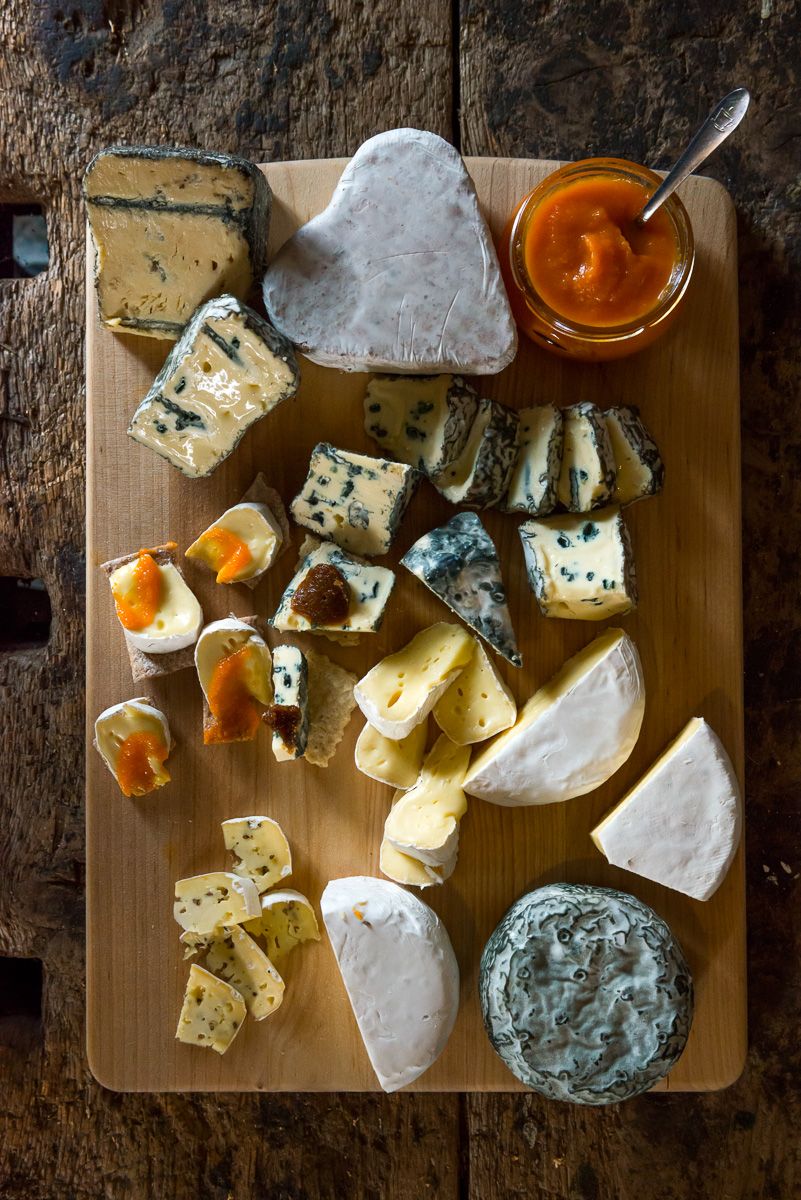 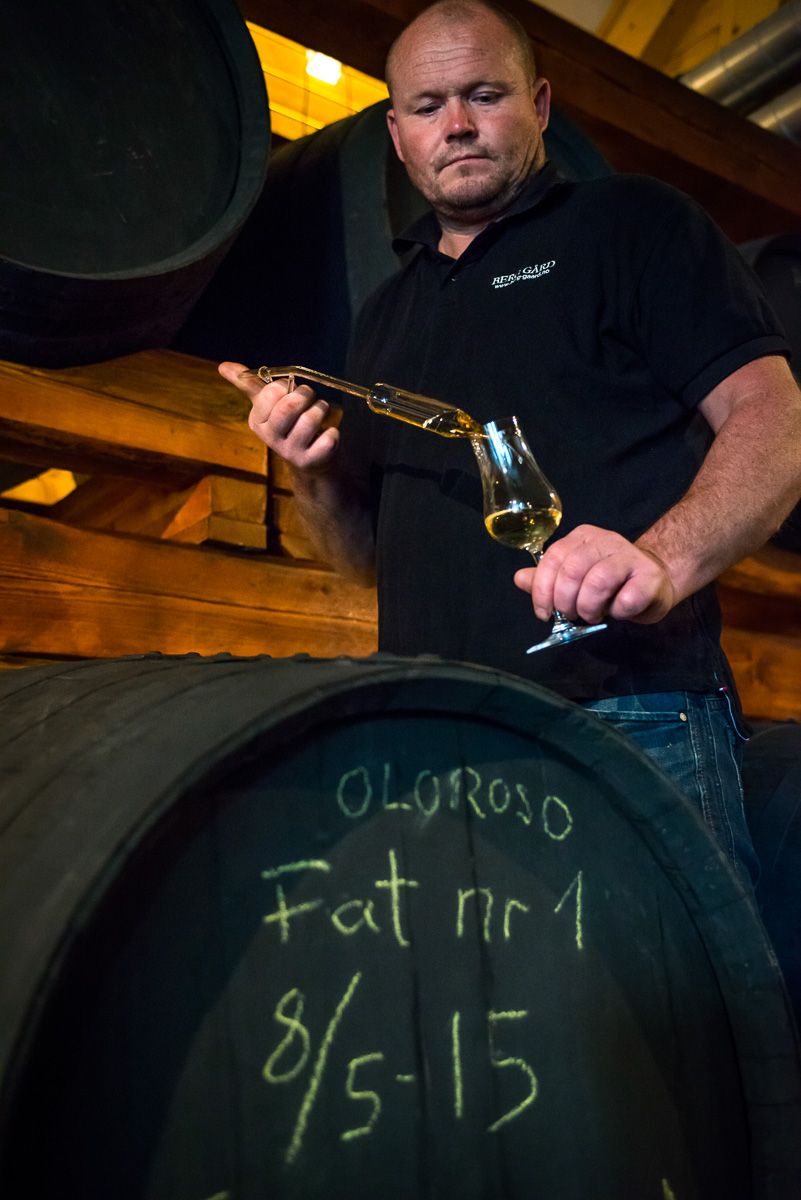 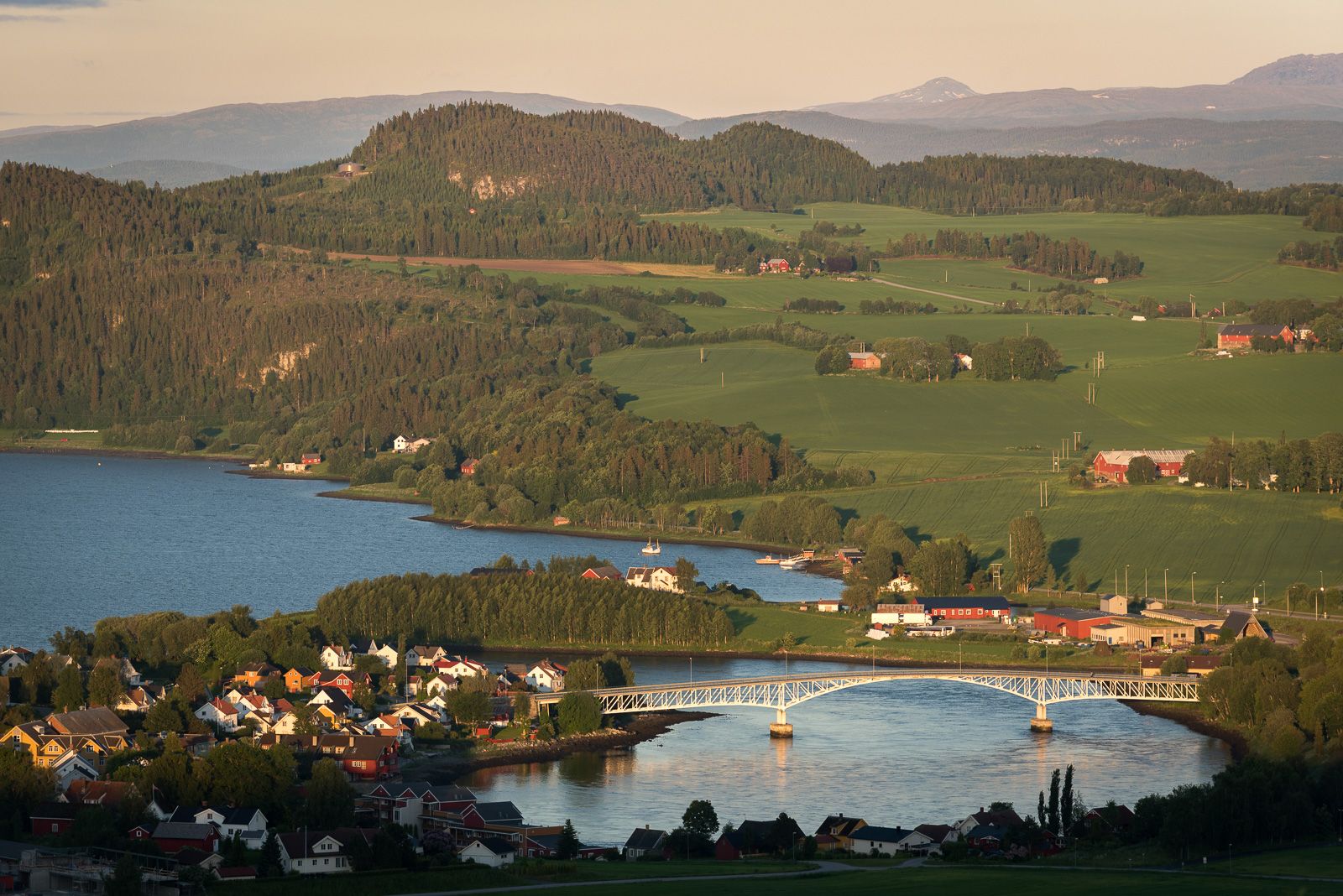 AT THE END OF THE DEAD-END ROAD
At Stokksund an arch bridge takes us to the island of Stokkøya, the home of only 300 Norwegians. After a handful of pendulous bends, the paved road stops at eight caramel-coloured boathouses in the marina. Where the country ends, kayaks lie upside down in the grass and sailboats float as if they are looking out over the clouds that gather further down over the Norwegian Sea.

Slightly further down the bay, sunk into the grass strip between the mountains and the sea, we find beach bar ‘Sjøsenter’. There are two wood-fired hot tubs on the beach and local blåskjell, mussels, on the chalkboard. According to owner Torild, 97% of all this Norwegian seafood comes from this region. After our road trip, we fully understand the full flavours of Norwegian nature. It is tasty. You should try. 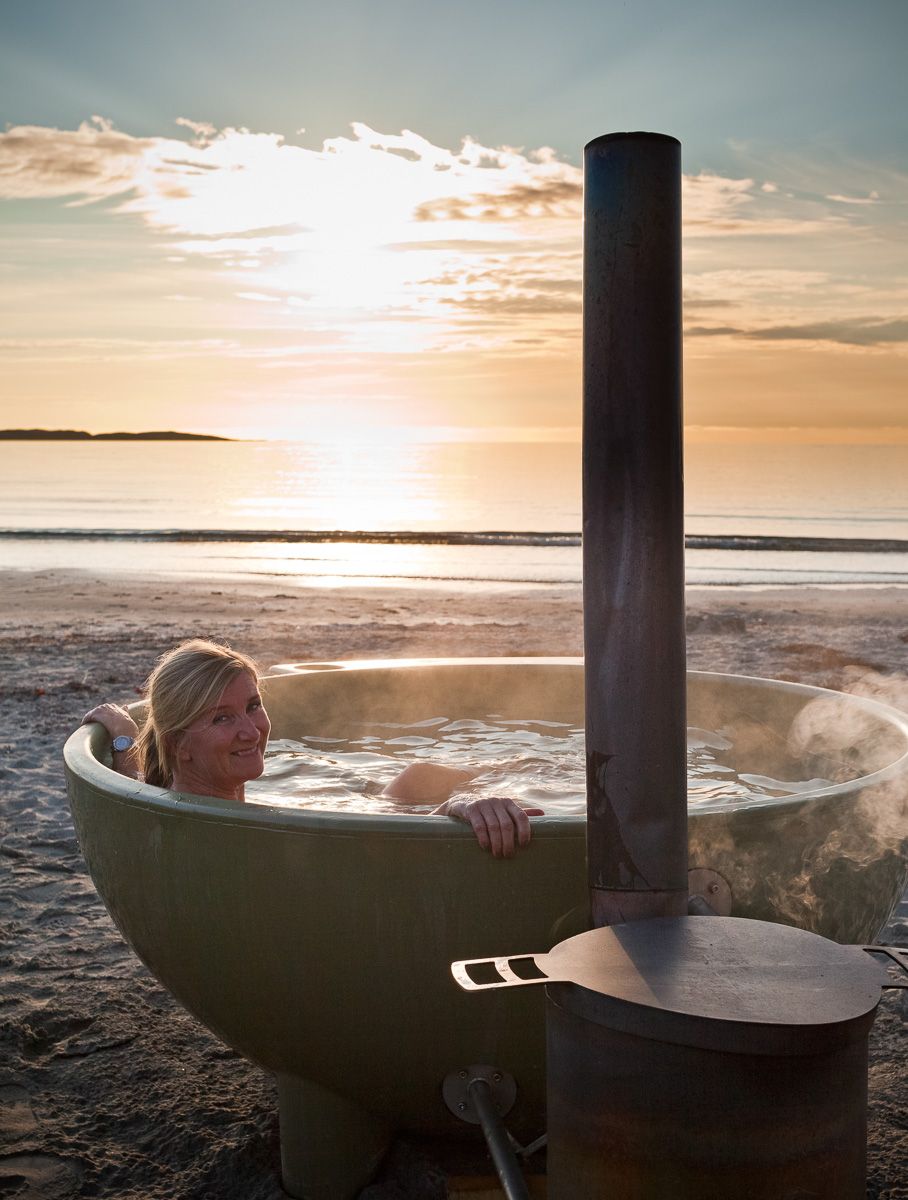 TOGETHER:
The insiders of Up Norway organised our foodie road trip in Trøndelag. Based on interests and available time, they come up with suggestions and routes which you otherwise might not find or book yourself, such as a tasting at a microbrewery or lunch and overnight stay with a farmer’s family. You’ll get your itinerary, maps and telephone numbers in a Trip app, so you never get lost.