Between heaven and earth
Garda Trentino

You would almost forget it, but above Lake Garda lies another world, one of steep grass plains, old defensive lines and viewpoints. Don’t forget the hearty goulash and homemade grappa either. Time for a week-long mountain lodge trek through this ‘other Garda’.

All roads lead to Rome, apart from the one my taxi driver is currently following it seems. In all the forty years he has lived on this planet he has never visited the Italian capital. “Why would I? Everything here is based around tourism. In the little free time I have I head into the mountains, even in the winter, when the strong northern winds blow through the abandoned streets of the northern villages.”
I sit in the backseat with mixed feelings of indignation and jealousy. How on Earth, especially as an Italian, can you never have been to the Eternal City? Yet at the same time how wonderful it must be that a few hours of free time and a mountain are all you need to escape the daily grind here. 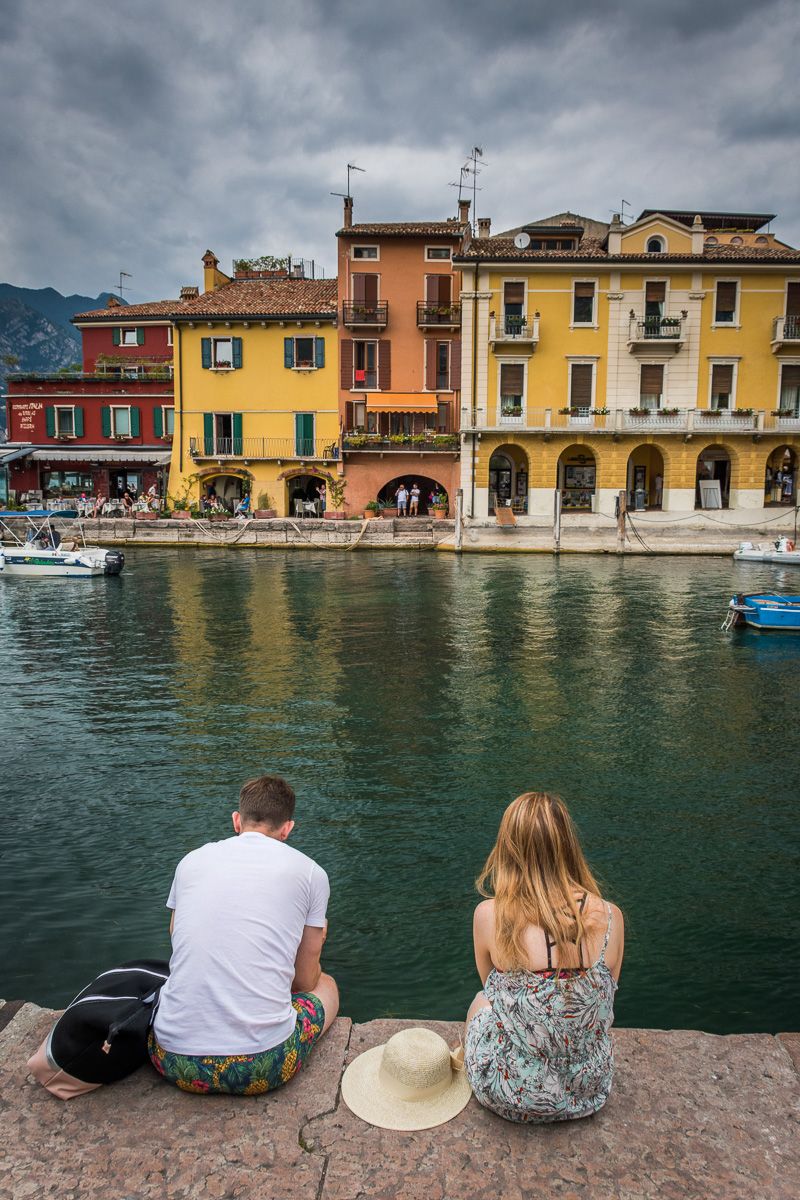 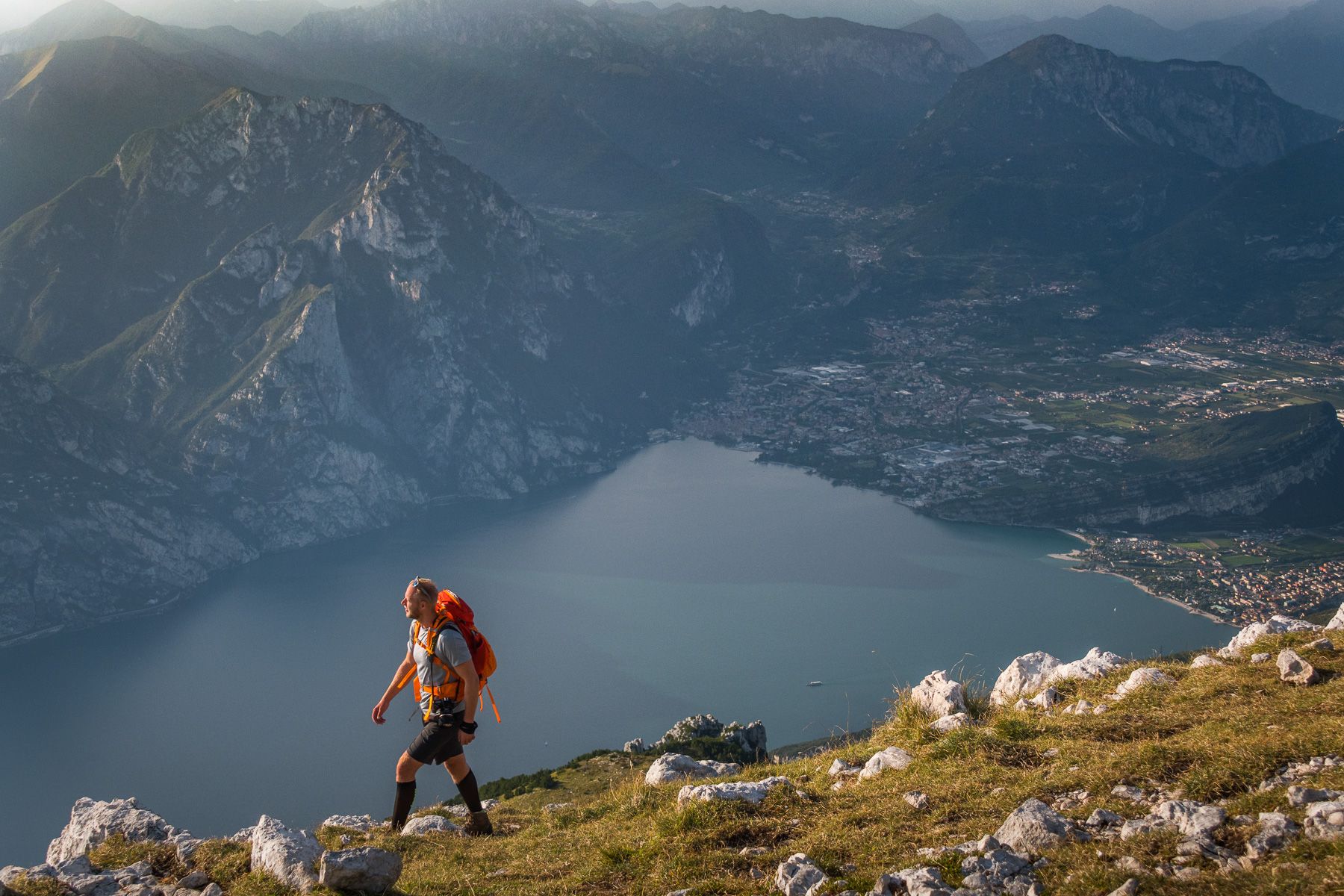 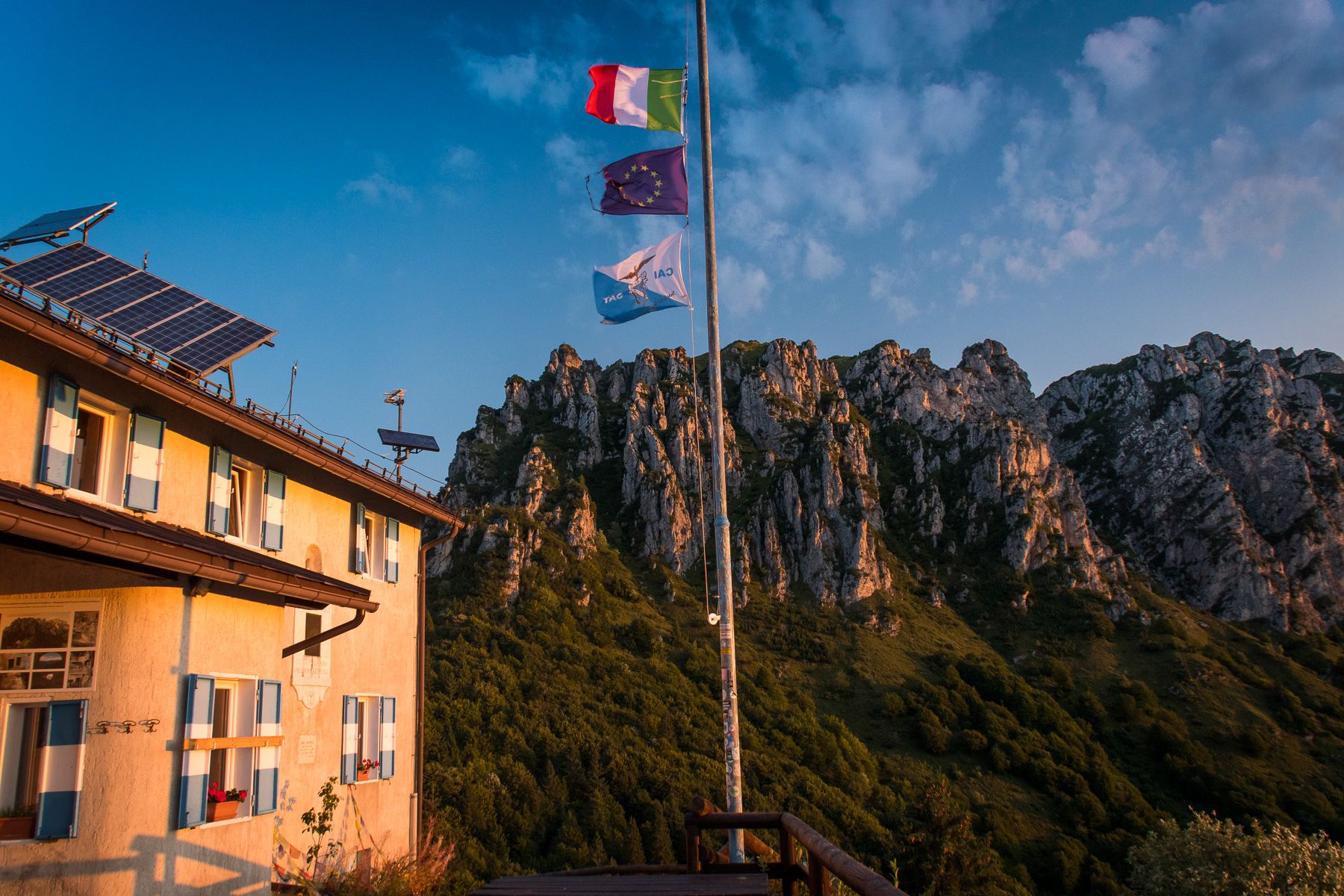 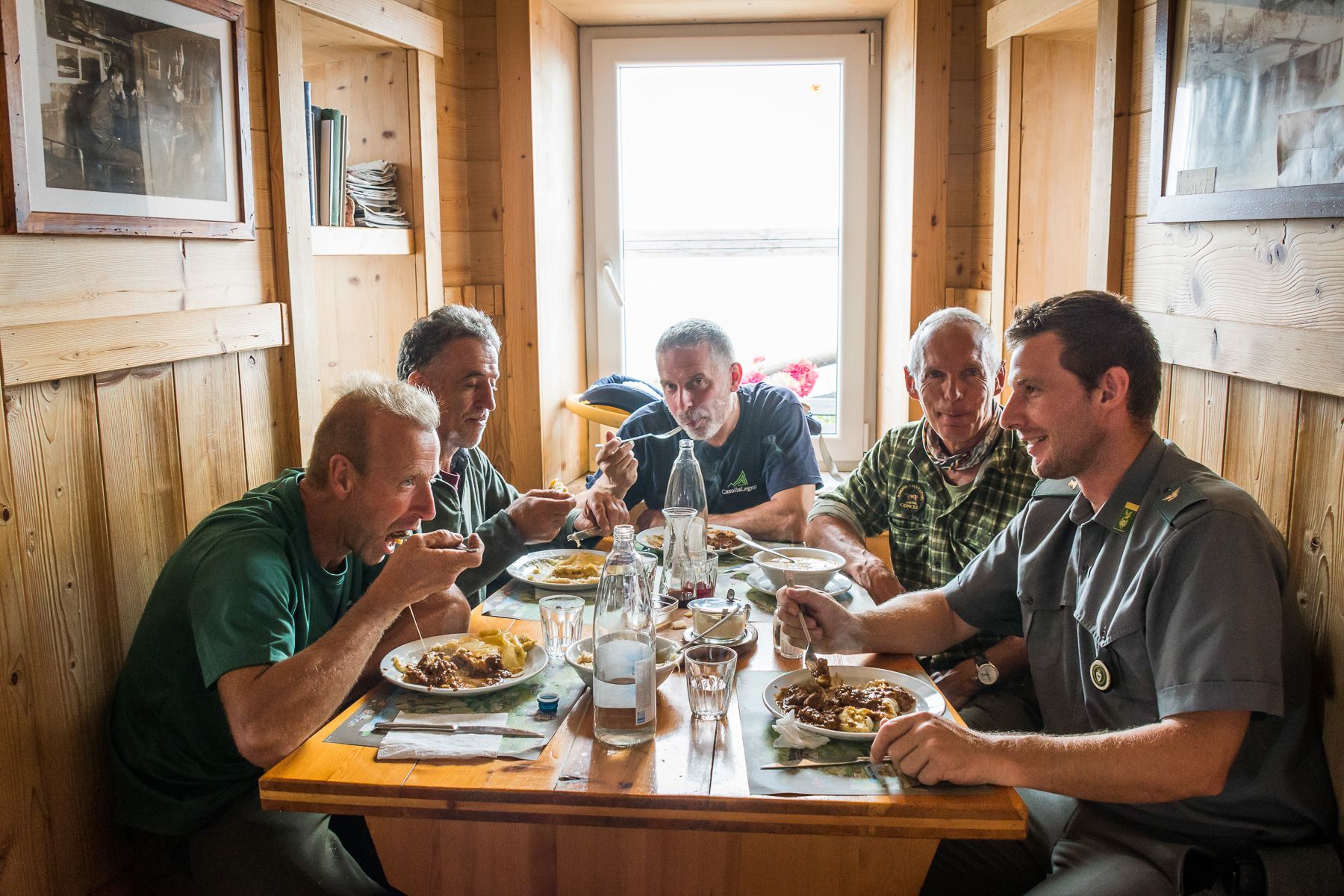 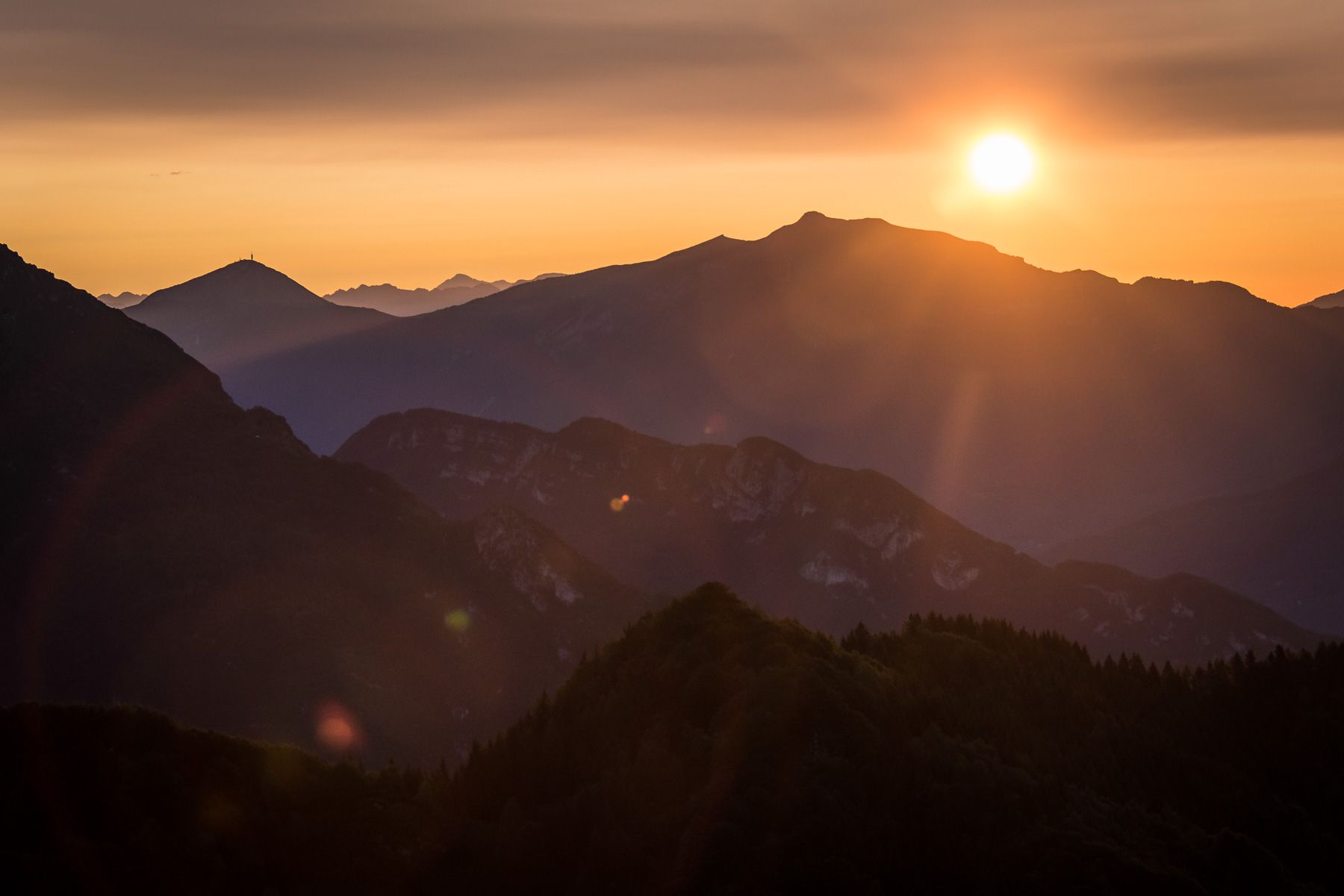 Over the next few days we learn to better understand his world. On our itinerary is one of the three circular hiking trails to be found towards the northern part of Lake Garda, the Garda Treks which together form an imaginary crown. We will be hiking part of the Top Loop, a seven day hike from mountain lodge to mountain lodge over the crests of the mountains, the level of difficulty being best described as “physically demanding”. From Riva we begin our ascent, from 88m above sea level to 1790m seven hours later. We wander through woodland and grassy plains, past bunkers, trenches and barbed wire, meeting a shy man with a metal detector on the way, on the lookout for remnants of the First World War.

Around lunchtime we arrive at the Rifugio Permici where we meet Marco, our host, a young man with hair so red that if he stuck his head out of the window on a clear day he would be visible from the valley below. In his arms he carries a baby, barely a year old and already accustomed to the daily rhythms of life in the mountain lodge: the lunchtime the chaos of day hikers, then followed by the relative peace of deeper conversations with those staying overnight during dinner. It is the same merciless rhythm that ties down Marco and his family to the mountain. He has been walking around with a broken finger for weeks, but there has been no time to descend down into the world of the living. What is his solution therefore? A piece of wood and a roll of tape is enough for the time being.

The Crown of Garda: three circular hiking trails in the northern part of Lake Garda

Marco is not the only one with an injury to his name. During the descent the next morning I unexpectedly fall down onto the damp ground, with glistening stars and warbling nightingales above my head. I clasp at my ankle, as I thought I heard something break, but with the aid of crutches I manage to scramble to my feet once more. Two more hours of descent and three days hiking lie ahead of me still. Best to wait a little while before taking my shoe off, which that evening turns out to be a good idea, as my left foot has turned as blue as the waters of Lake Garda and sticks out as big as a ball of gelato from my hiking boots. 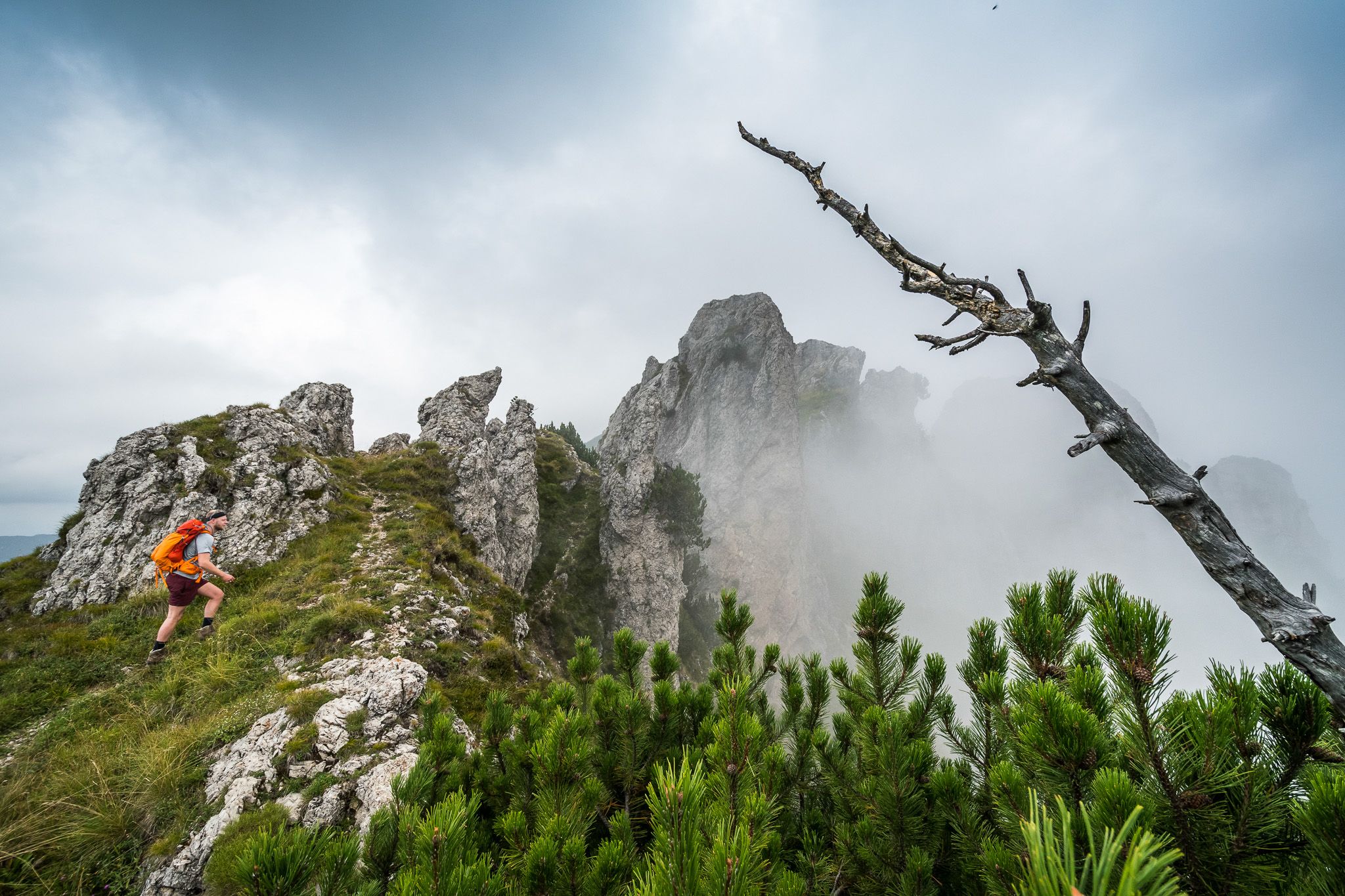 Luckily the climb up the right bank of Lake Garda, up Monte Baldo, is a little more forgiving, despite it taking seven hours. Fewer rocks and loose debris, and more alpine meadows where the green hangs like a kind of hammock between the mountain ridges. The end of this stage in particular is wide and open, and deadly quiet, so quiet that only the hum of the hoverflies and the music of the marmots breaks the silence. Calm soothes discomfort.
At the top of Monte Altissimo the polenta is ready, prepared in a huge pot over the fire and served by a young man from Verona and a woman from Tuscany, who also prepared the fire itself. How can anyone want to leave here? The views from the top of the mountain are of such a rare beauty that it’s better to share it with someone. At the foot of the Altissimo a calm descends over Lake Garda, with only the Malcesine-Limone-Torbole ferry betraying any semblance of life.

All around the chalet are former trenches and ruins, here and there a forgotten piece of barbed wire. Sections of the Top Loop form part of the Sentiero della Pace, the Peace Trail, a hiking trail measuring 500km in length that connects important sites from the First World War. The day before we had flicked through Marco’s photo albums: pictures of snowed in yet proud soldiers on lonely mountainsides. 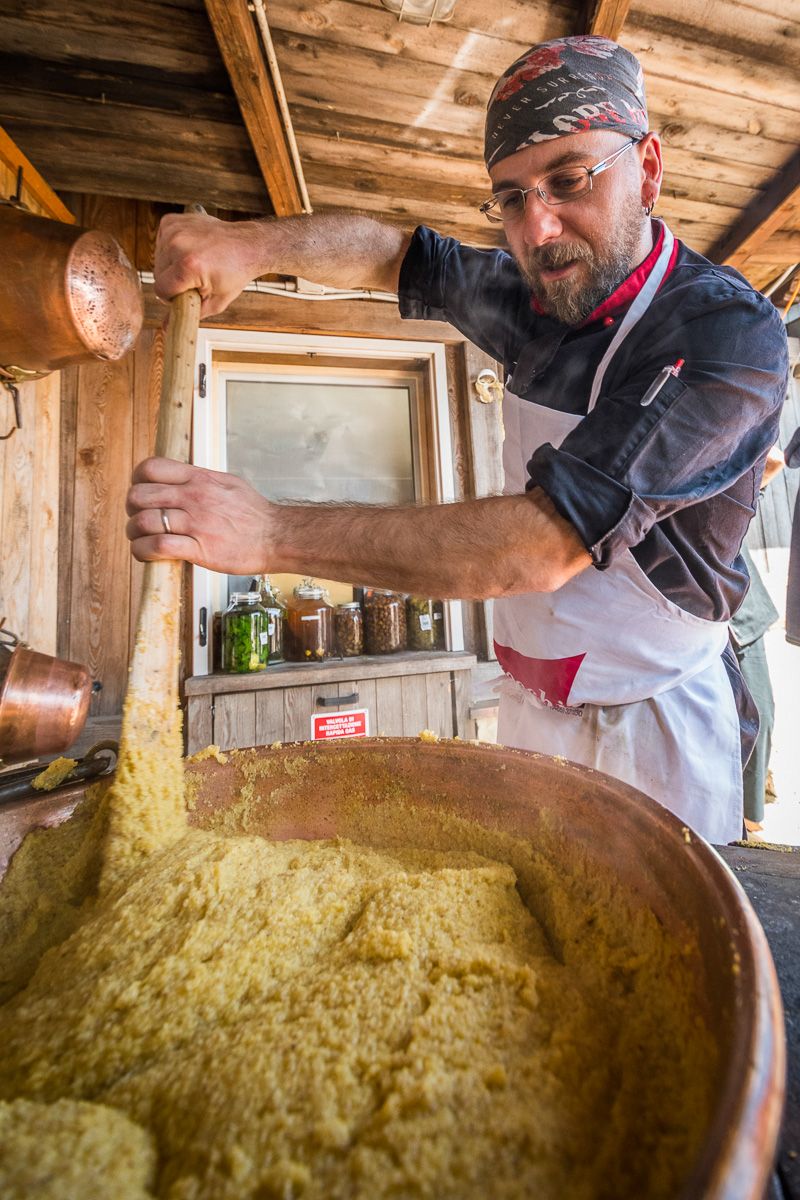 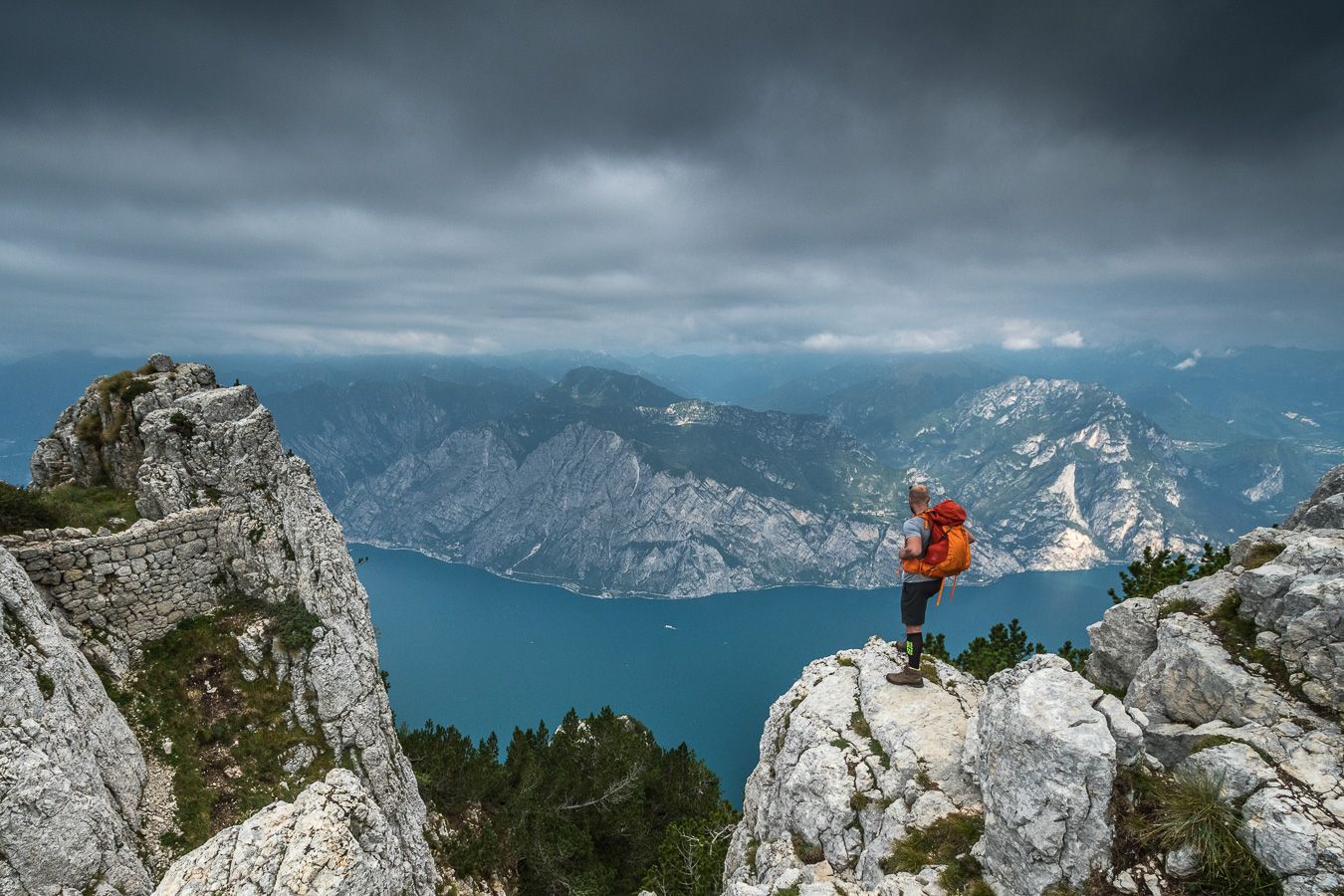 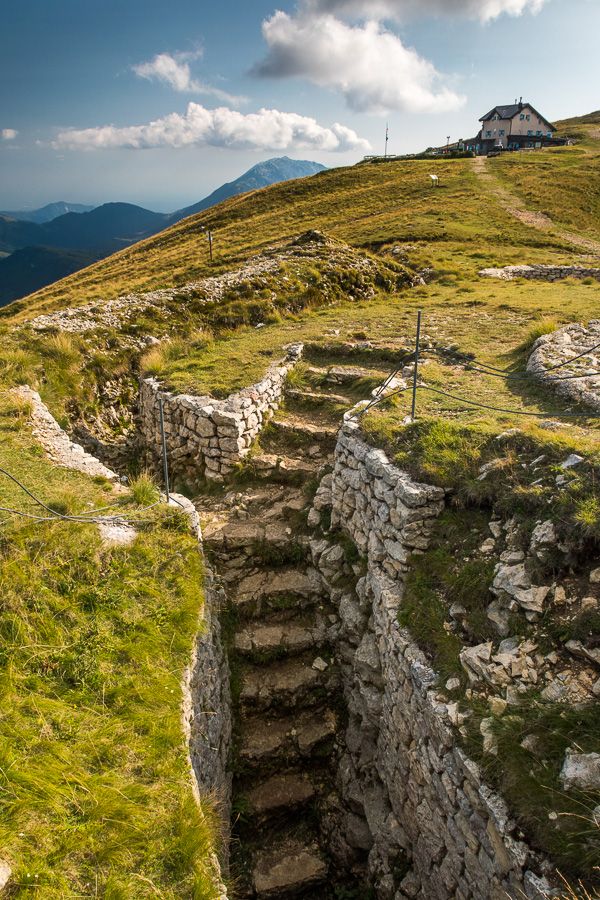 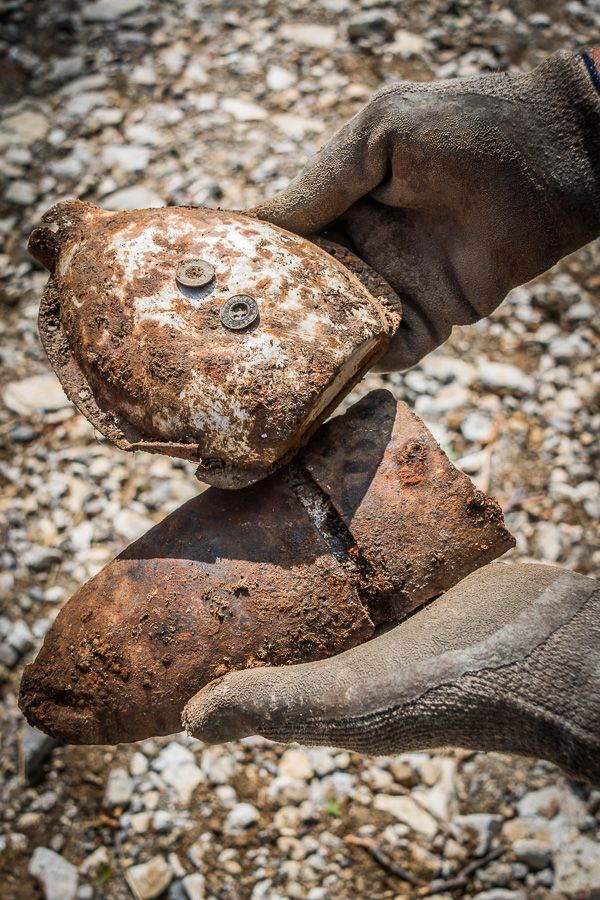 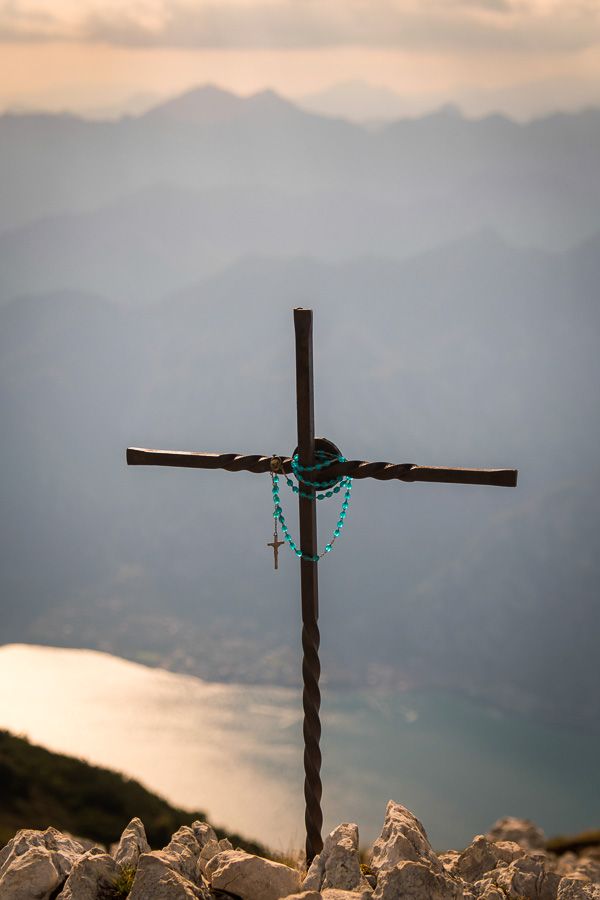 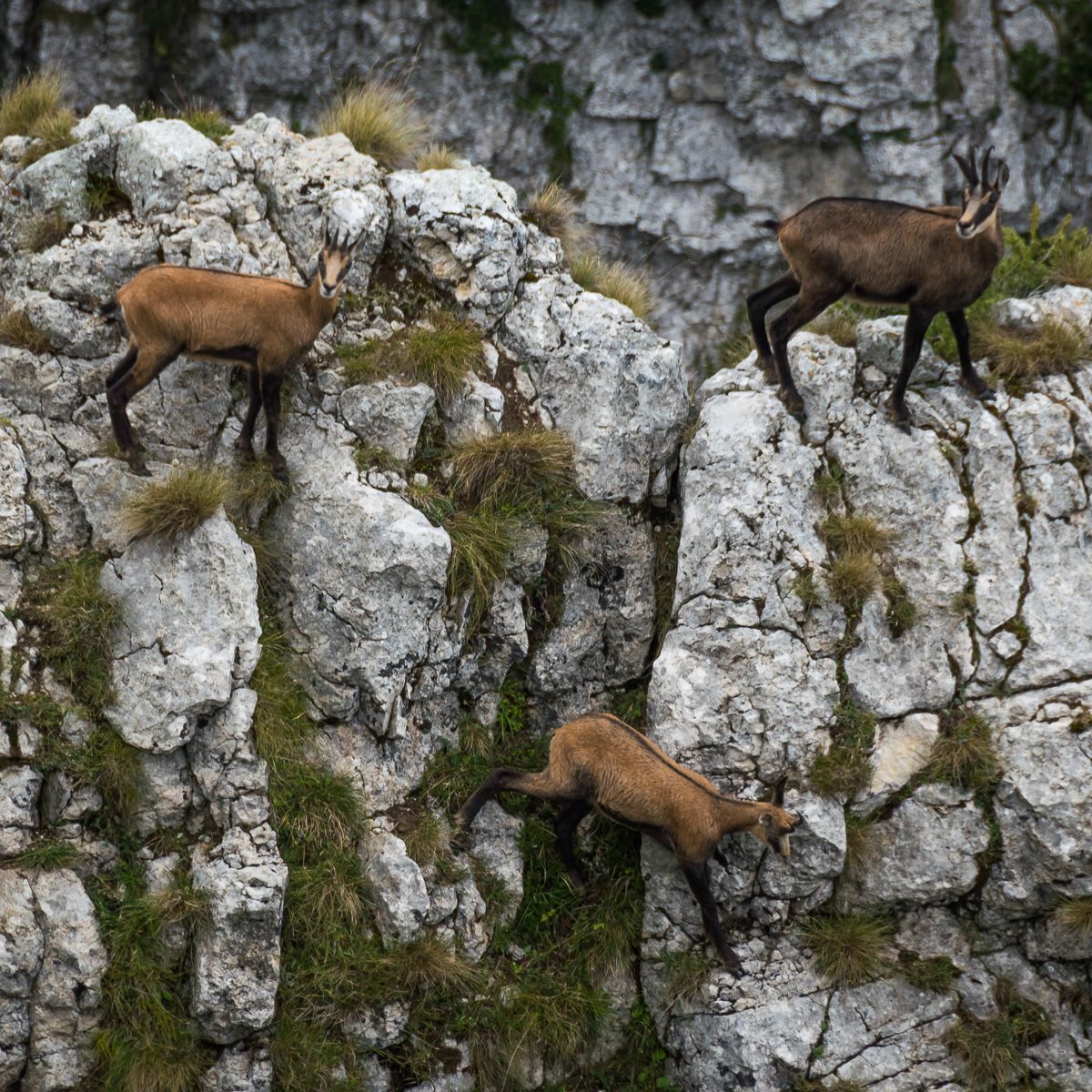 The last day of hiking is a slow and steady return to humanity. Two or three hours trudging over crests, heaths and through woodland, where the view over Lake Garda gets bigger, but at times is shrouded in a dense fog. Here you find preikestolen like those that are found in the Norwegian fjords: pieces of rock jutting out from dizzyingly high cliffs, said to resemble a pulpet (hence the name). The chamois have a little less difficulty with it, slowly clambering down into the depths down the sheer vertical cliff face. For us, the cable car is enough, which in a matter of minutes returns us to the reality of bustling café terraces and tourist dives: Malcesine.
On the ferry from Malcesine to Limone and Torbole a Flemish girl asks where we’ve “walked down from”. I point up towards the mountain. “From another world. One of people with shining hair, goulash and homemade grappa.”

The Crown of Garda

Lake Garda is known by many, the mountains surrounding her, much less. The seven day hike through these highlands is one of great views, along steep cliffs, alpine pastures, vineyards and medieval villages and dark forests. Seldom is she out of view: Italy’s largest lake: Lago di Garda.
More info about the most beautiful hikes of Trentino
Tags: Edition #1 2018