When you think of Helsinki, you think of dark winters and cold days. A place to flee away from, heading towards the sun. It is indeed dark, and you cannot deny the cold in winter, but Helsinki feels like a crackling log fire. A story about fortress Suomenlinna, the prestigious Nyländska Jaktklubben and saunas. Oh, those saunas…

On the deck of the ferry running from Market Square in the Finnish capital Helsinki, a young lady is gazing dreamingly from under her hat to the waves of the Gulf of Finland. This part of the Baltic Sea is even less salty than the Baltic Sea itself. In some areas of the Gulf of Finland, it is only three per mille, or 3 grams salt per litre of sea water. A large difference compared to the North Sea, which with thirty-five per mille contains almost twelve times as much salt as the water between Finland and Estonia, with the Russian coast in the East. This is primarily caused by the two hundred and fifty sweat water rivers that end in the Baltic Sea The heavier salt water pushing its way into the Baltic Sea from the Atlantic, keeping this sea salty, doesn’t hold much power here.

This makes for the brackish character of the Gulf of Finland. It is also the reason the sea freezes over fairly quickly over here. But, this year, it hasn’t, yet. Here too, ancient weather patterns are susceptible to Earth’s temper. Not that the young lady in question is dreaming about that, at least I don’t think so. A wooden building on the quay catches my eye. “That is the Allas Sea Pool,” the young lady says, introducing herself as Mikaela. “Swimming pools and saunas. They are working hard on a new main building. They used crowdfunding to finance it. A lot of the inhabitants have contributed a little. I did too,” she says, laughing.

The weather is rough. The thermometer shows minus three. Add a fierce sea breeze to that, and you’ve got icicles hanging from your nose. “It’s chilly, but minus twenty would be more common for the time of the year,” says Mikaela. She, like us, is on her way to Suomenlinna, the fort island that for centuries protected the city of Helsinki against attacks from the sea. “In summer it is one of the most crowded attractions of the city,” she says. “Now, it is nice and quiet, apart from about eight hundred people who live spread across the island. I wanted to go work in one of the coffee bars there. And to get some fresh air on the ferry. It clears my head, so I can get to work with a fresh mind.”

We say goodbye at the landing of the ferry. Our guide Sari is already waiting for us. “Welcome on Suomenlinna, UNESCO World Heritage since 1991,” she says warmly. We walk across the island, while Sari gives us more information. The history of this fortress on six interconnected islands is actually the history of Finland in a nutshell. 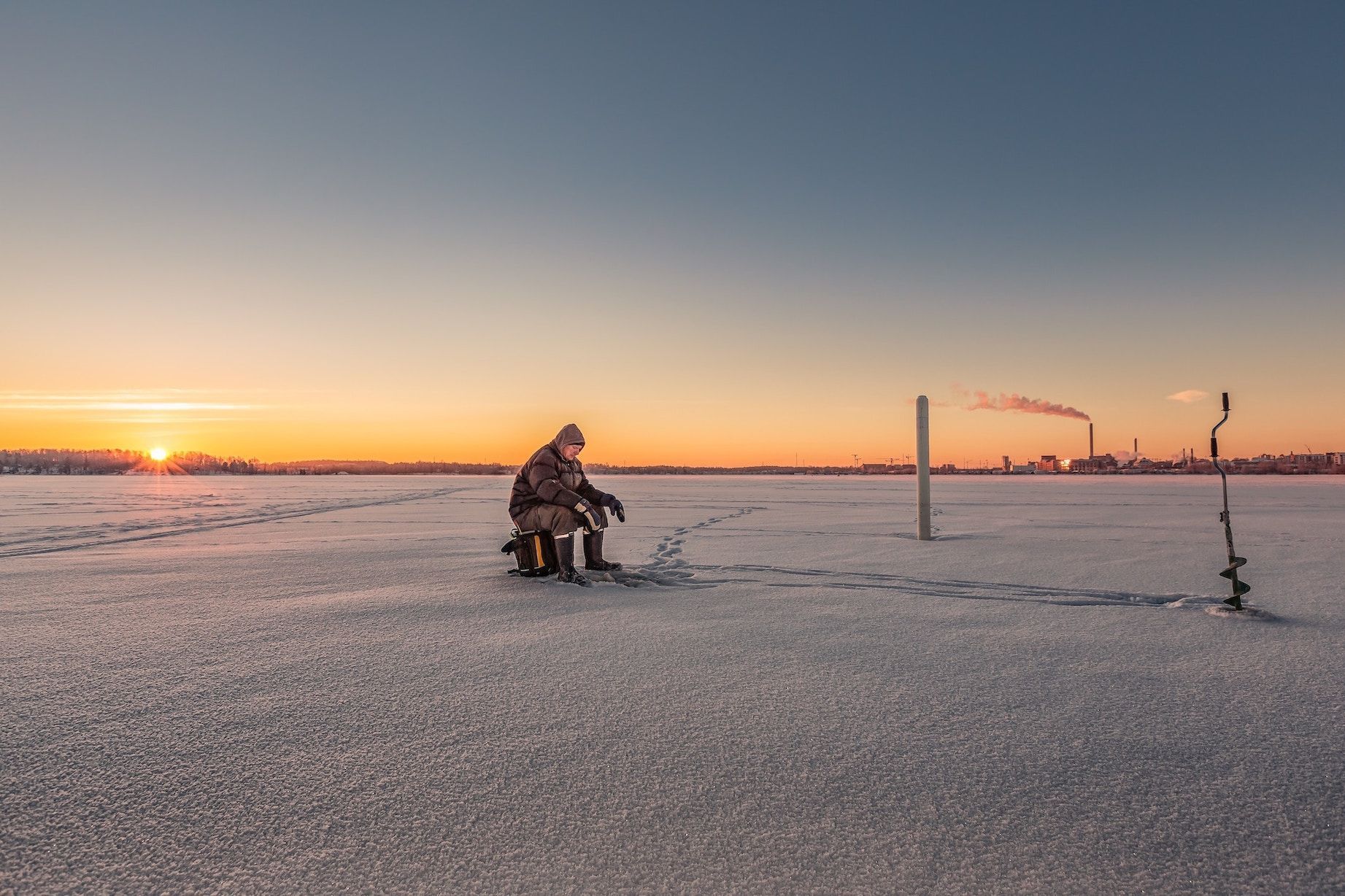 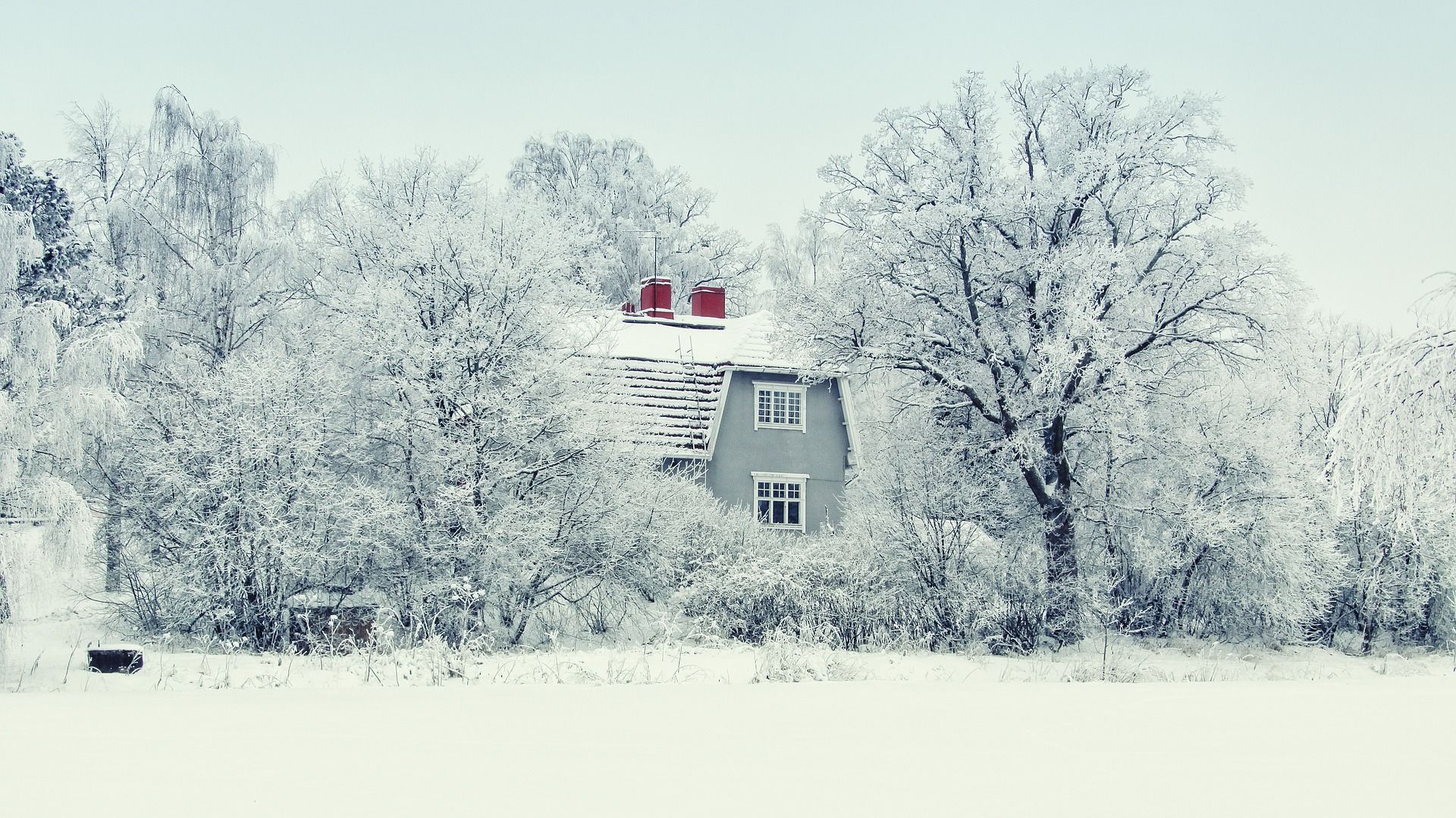 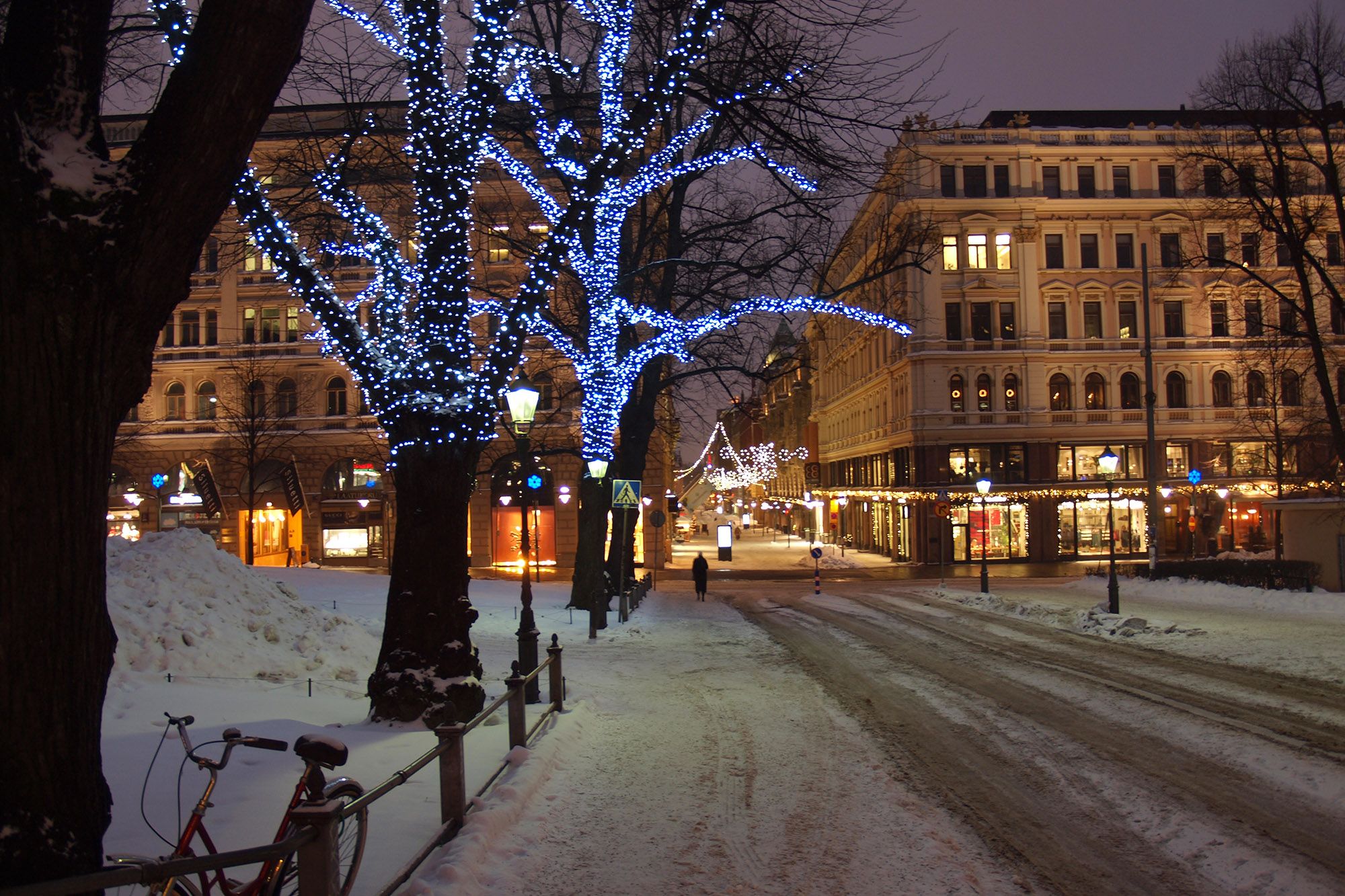 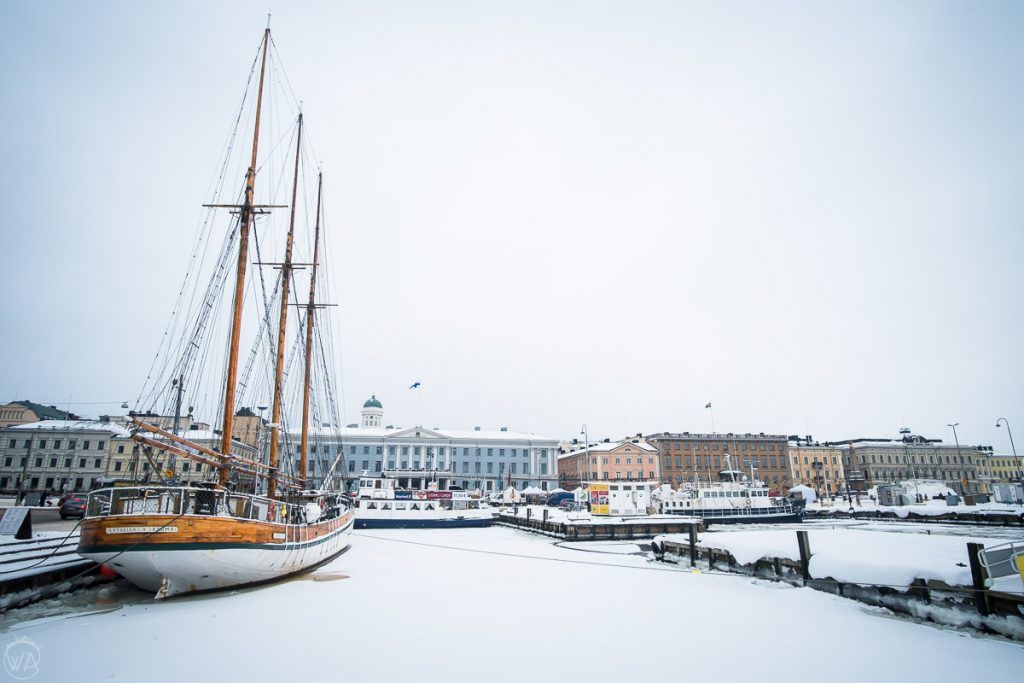 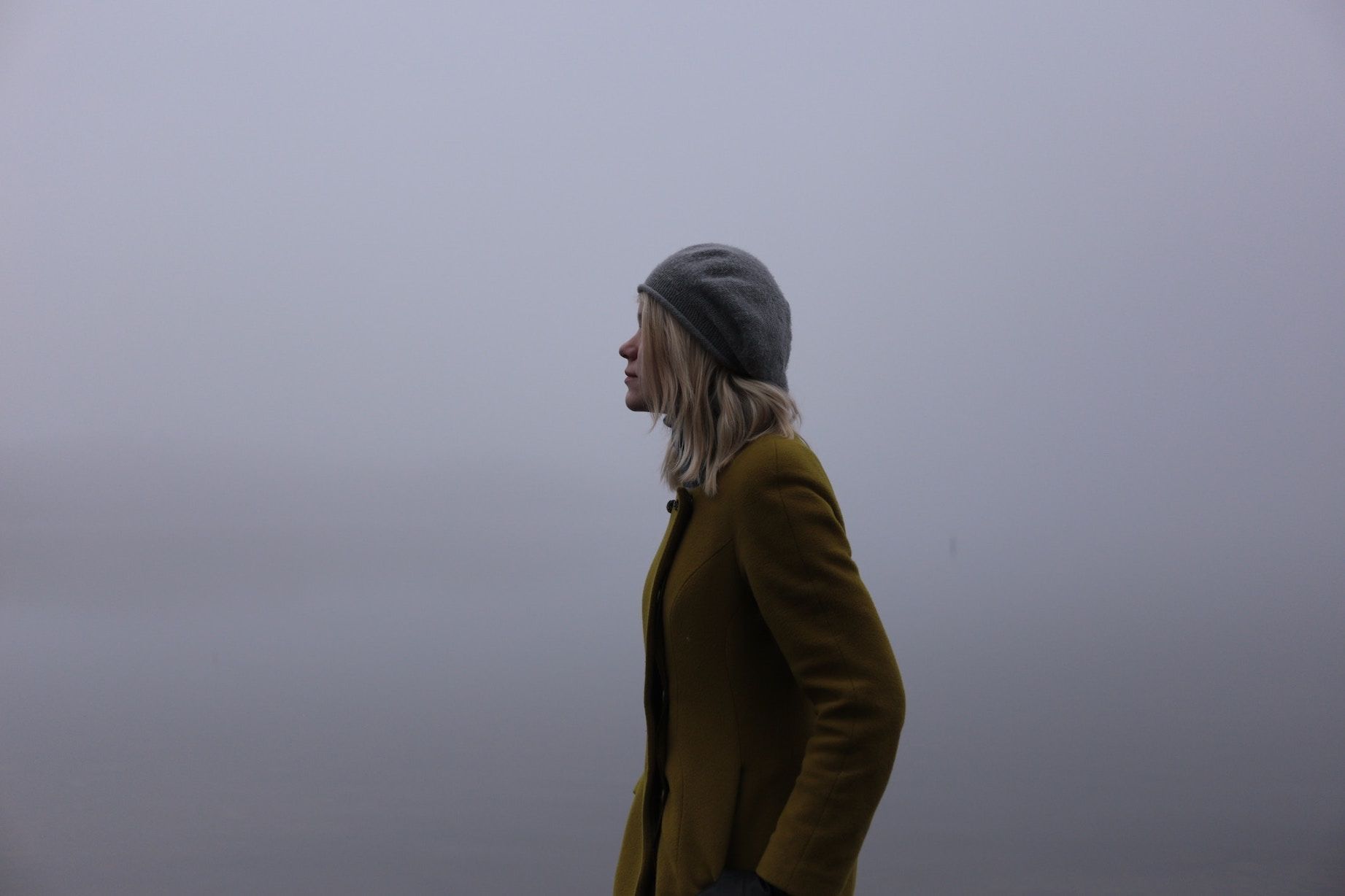 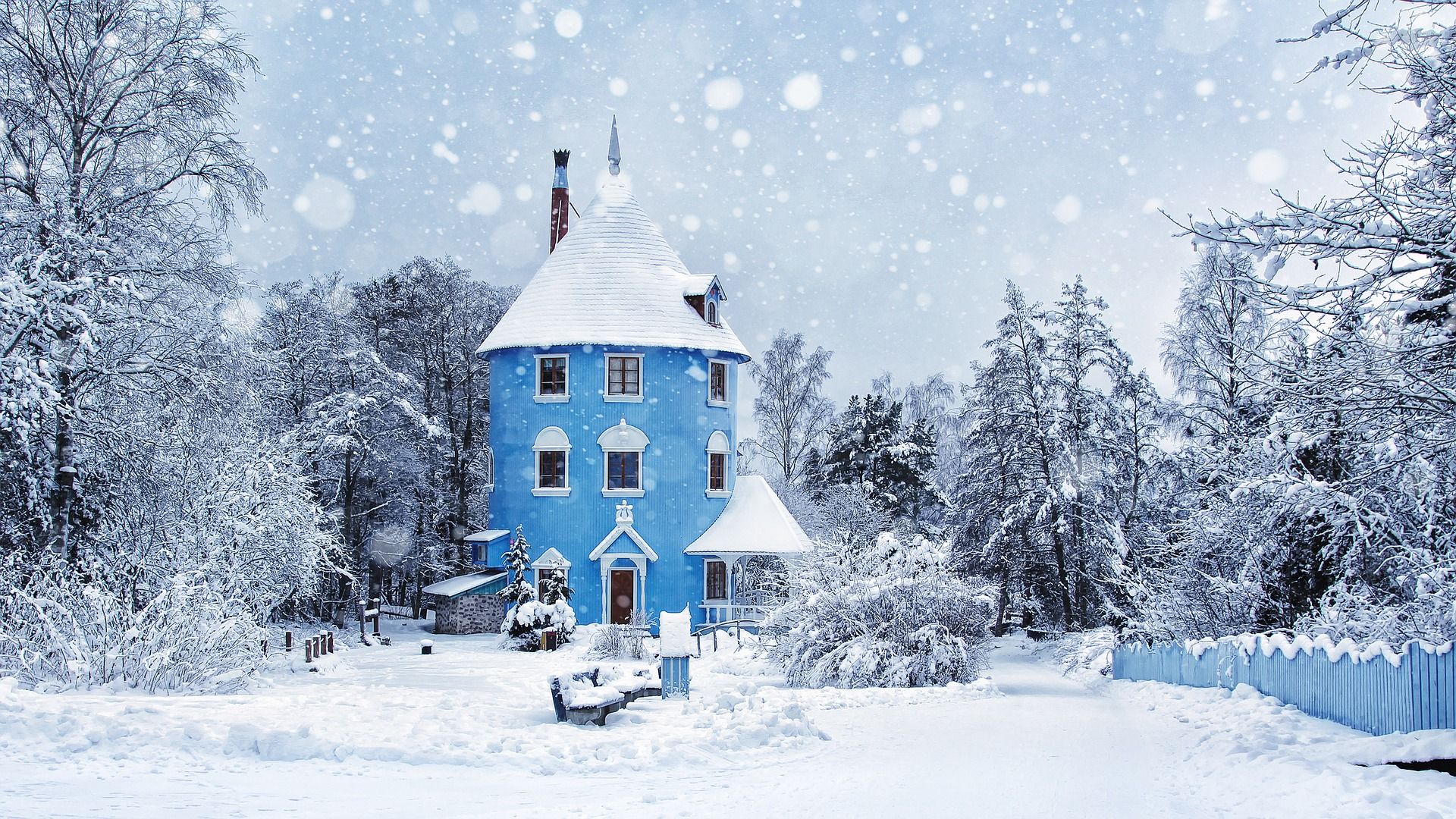 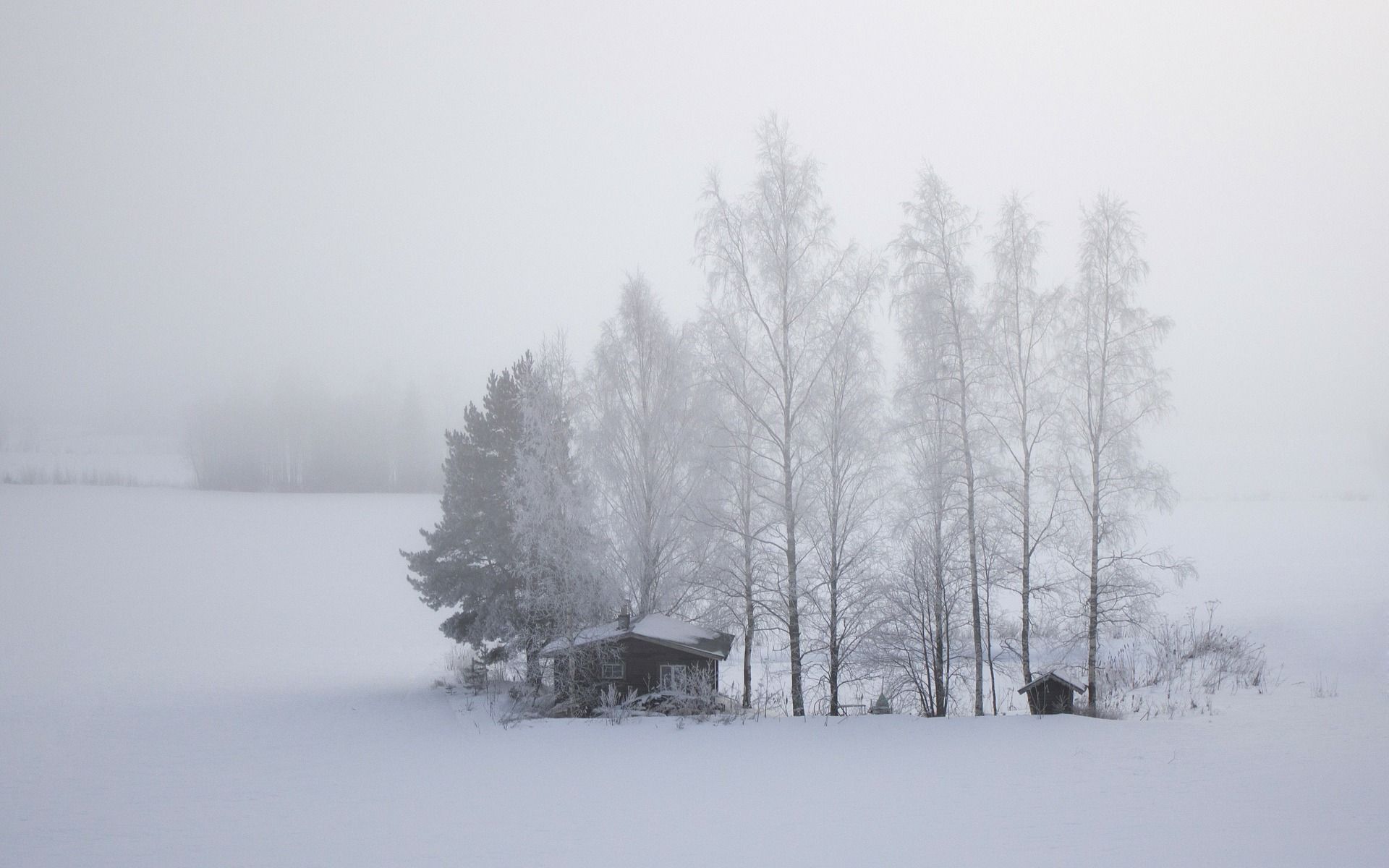 “This year, Suomi, as we Finns call the Finnish Republic, turns hundred,” explains Sari. That makes it a relatively young country. Until 1917, it’s the Swedes and Russians who are in command. From the 13th century onward, we were part of the Swedish Kingdom. The Swedes are the ones who, in 1748, after much struggle, started building the fortress to stop the Russian threat. That worked just fine until 1808, when the Finnish War between Sweden and Russia breaks out and a victorious Russian Empire takes Finland. It was actually a Dutchman in service of Russia who planned and won the Finnish War: Jan Pieter van Suchtelen. Finland becomes Suomen suuriruhtinaskunta, or Grand Duchy of Finland with the Russian Tsar as Grand Prince. The yellow brick buildings here on the island date back to the Swedish era. The wooden and stone buildings in all other bright colours were built in the Russian era. Look, that is the island’s prison.”

She points towards a large square granite building that stands gloomily in the winter mist, surrounded by scaffolds. The workmen are busy, despite the frost. “Those are prisoners,” says Sari laughing when she sees the surprised expression on my face. “It’s an open prison.” You heard right. This island, listed as UNESCO World Heritage, is swamped by tourists in summer. And yet, the prison site and the neighbouring apartment buildings and museums are only separated by a yellow wooden fence, to which the prisoners themselves hold the key.

“Dozens of years ago, Finland had the highest number of prisoners in Europe,” explains Sari. “In the sixties, we started researching the way in which detention helps to reduce crime. Conclusion: it doesn’t. In the three decades after, Finland has altered its criminal policy little by little. The amount of prison sentences has been reduced by two thirds. Now, we have one of the lowest numbers of prisoners in the world. It hasn’t led to more crime. What did work was gradual reintroduction into normal live, like it is offered in open prisons. About one third of the Finnish inmates stay in an open prison, and the Finnish institution for criminal penalties says that these inmates have a smaller change of recidivism. The numbers for recidivism have dropped with almost 20 percent. And we think they are an asset to the community here, because they restore and maintain the historical buildings.” She smiles again. “A lot of people are surprised, but it works. And that’s what counts.” 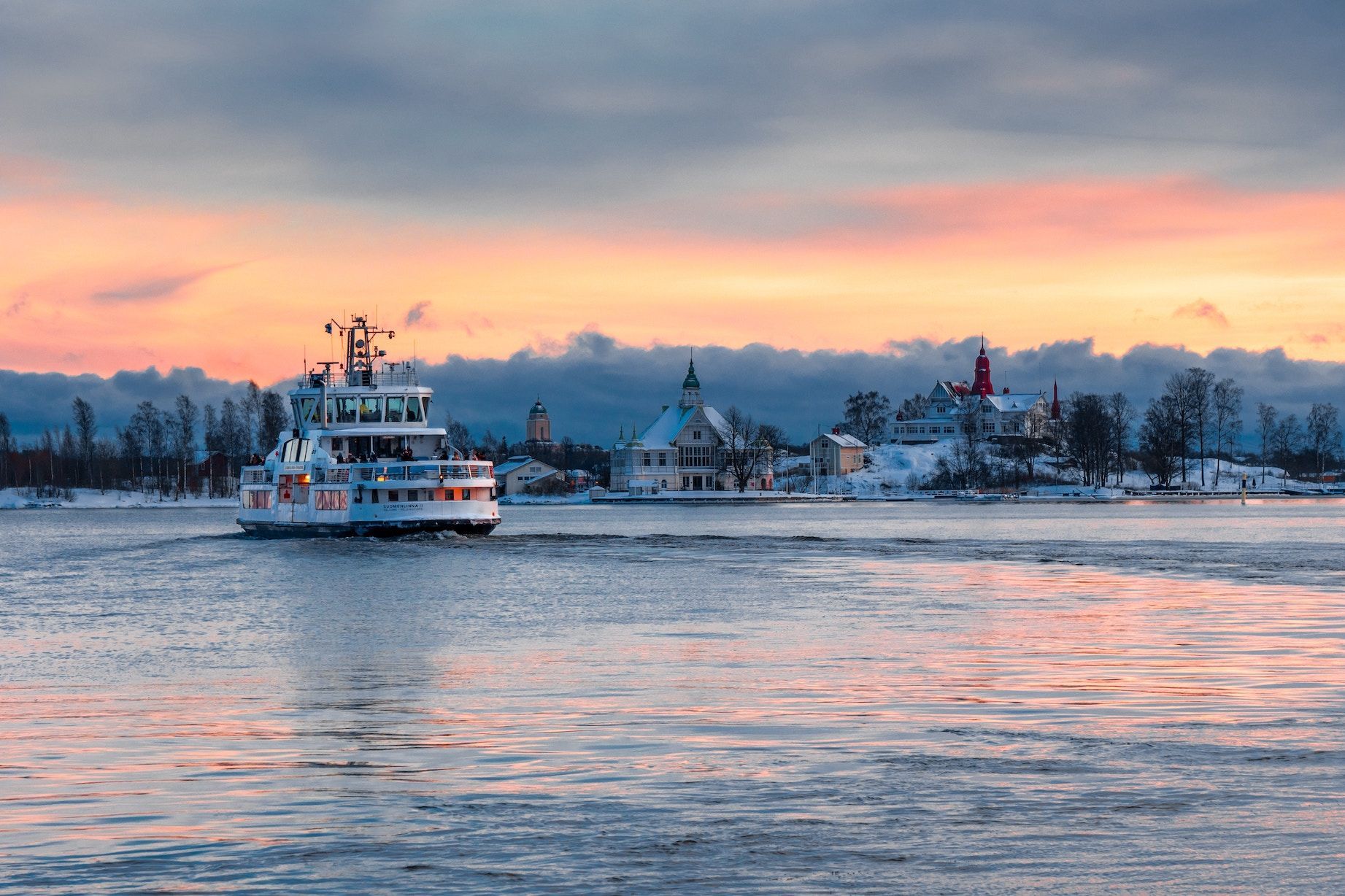 We continue our way along the bastions and strongholds. Sari points towards a dark hole. “Go in there. It’s quicker,” she knows. The passage goes under one of the fortifications. The old lime that was used to build, has slowly sank down and forms mini-stalactites on the ceiling. For the prisoners now, it might be comfortable living, but it hasn’t always been that way.

Sari continues with her historical insights. She explains how Finland separated itself from Russia at the end of the Russian Revolution. “In December 1917, Finland declares its independence. It also marks the beginning of the Finnish Civil War. Because there is no consensus about the new course for the country. There is great rivalry between the conservative White Guard and the socialist Red Guard. The Reds want to go in the same direction as the Bolsheviks in Russia. The White Guard chooses its own course, without Russia. The civil war only lasts a few months, but they fight like lions. On the White side, fifteen hundred soldiers are slain, and the war takes eight thousand lives of the Reds. Many captured Reds are executed on Suomenlinna, others starve to death on the island. A dark chapter in the Finnish history. On the 5th of May 1918, the civil war comes to an end.”

Our walk on the island comes to an end too. Not much later, we leave the ferry and walk towards the Norra Magasinsgattan 6A, the offices of law firm Hästo & Co. This is the company of Mats Welin, the Commodore of the Nyländska Jaktklubben (NJK), the most renowned yacht club in Helsinki. We passed it on the ferry: the island Blekholmen, home to the NJK. The large white club house with the characteristic green copper roof is one of the eye-catchers of the city. Blekholmen has one hundred and twenty-five berths, seventy-five of which are reserved for members. The other fifty are for visiting yachts.

NJK also has a marina in the city: Björnholmen. In the archipelago around Helsinki, up to Åland, there are ten others carrying NJK’s flag. “But we are closed in the winter,” says Commodore Welin. “Ice doesn’t do the ships any good. In summer, it is incredibly crowded on the water and all marinas of Helsinki are well frequented. The NJK was founded in 1861 and with that it’s the oldest registered sports club in the country. We are sometimes seen as slightly elitist, but it isn’t that bad. With around twenty-six-hundred members, we are quite large. You can’t deny it makes for great sailing around here. Even though you can’t often sail in shorts. Not even in summer. That’s mainly because the sea water doesn’t rise above fifteen degrees. With a little wind, it makes for a rather chilly sail. What does the sailing visitor need to watch out for when sailing these waters? That it can be rather shallow. Attentiveness is required.” 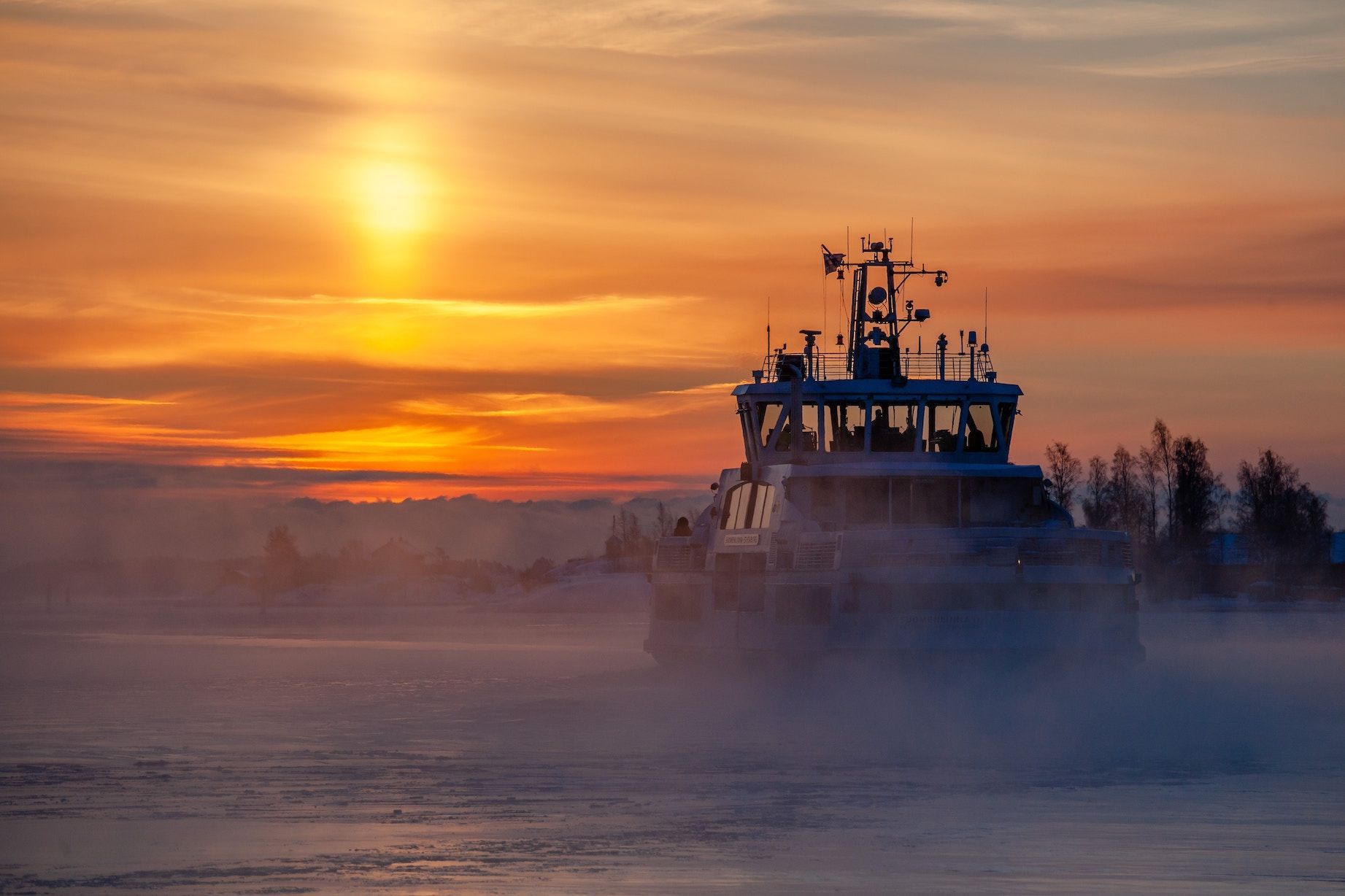 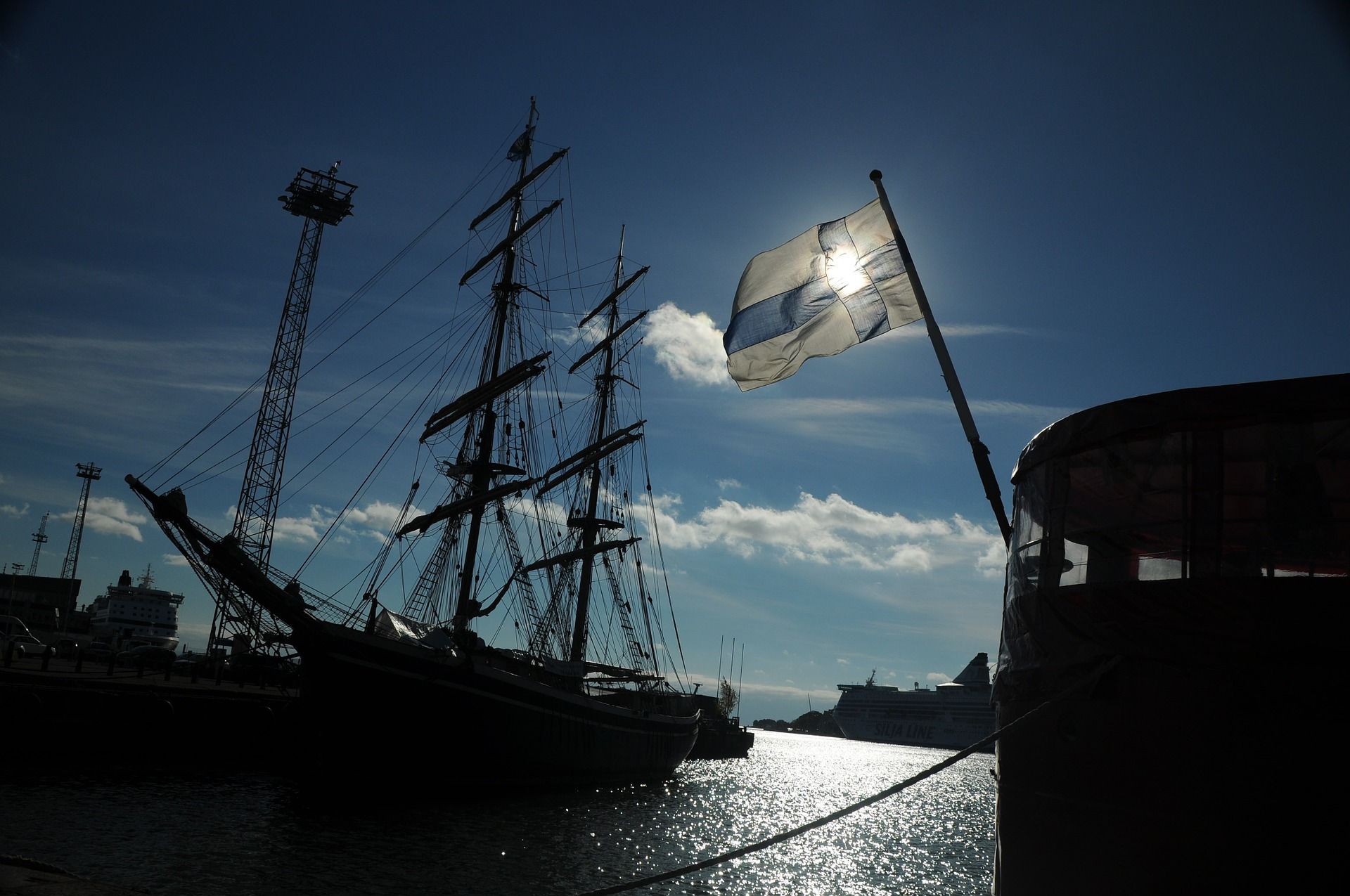 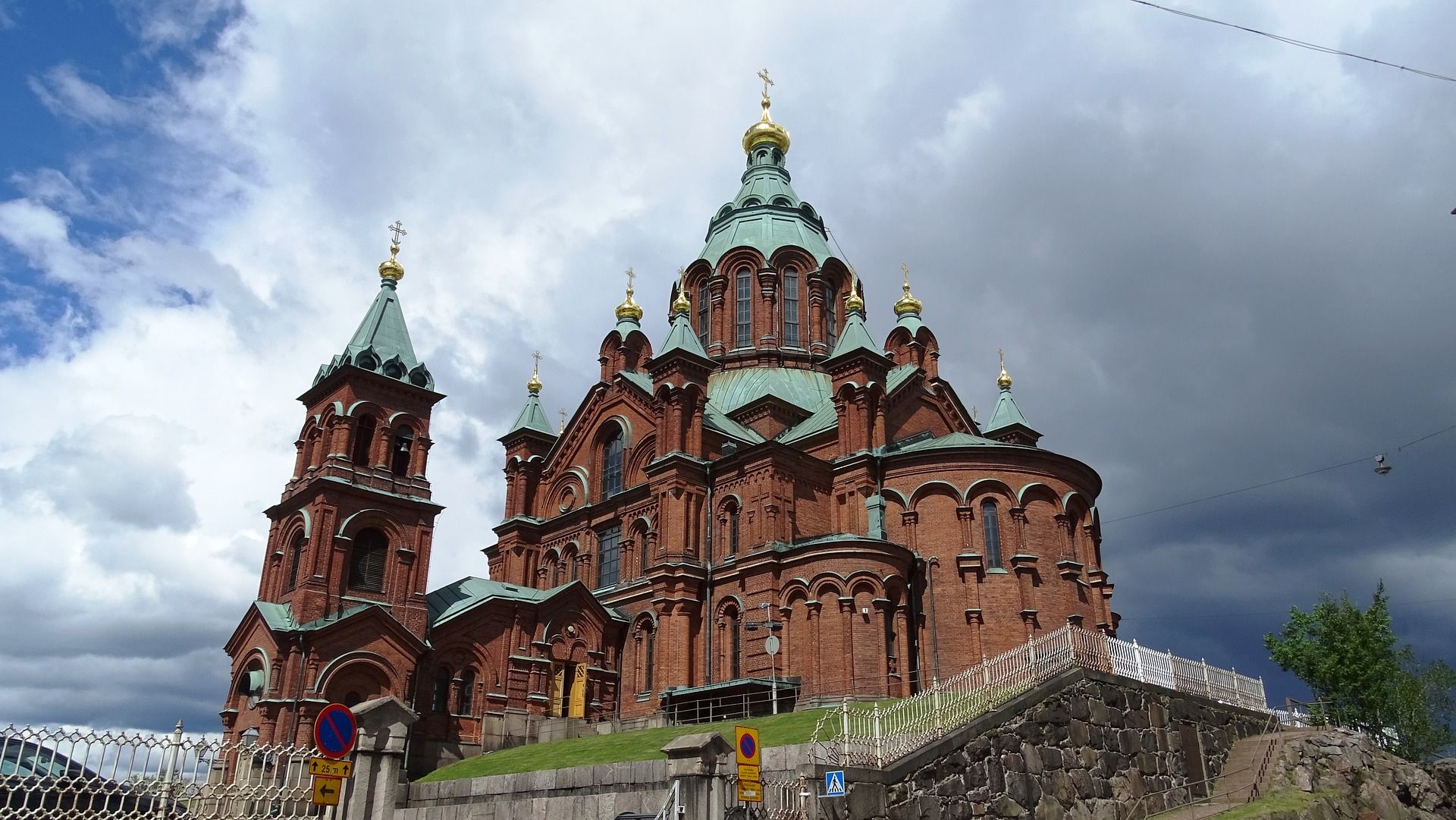 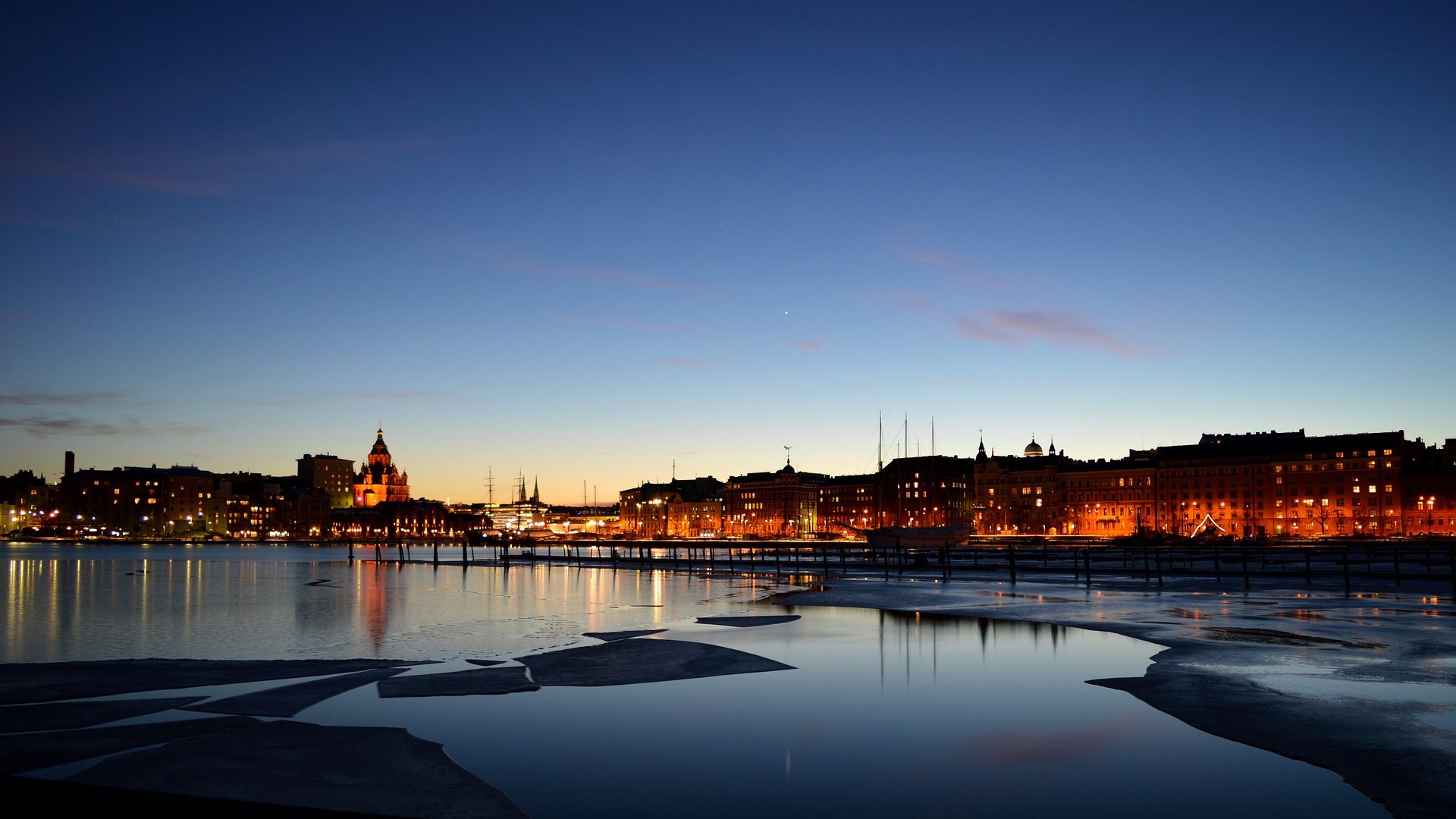 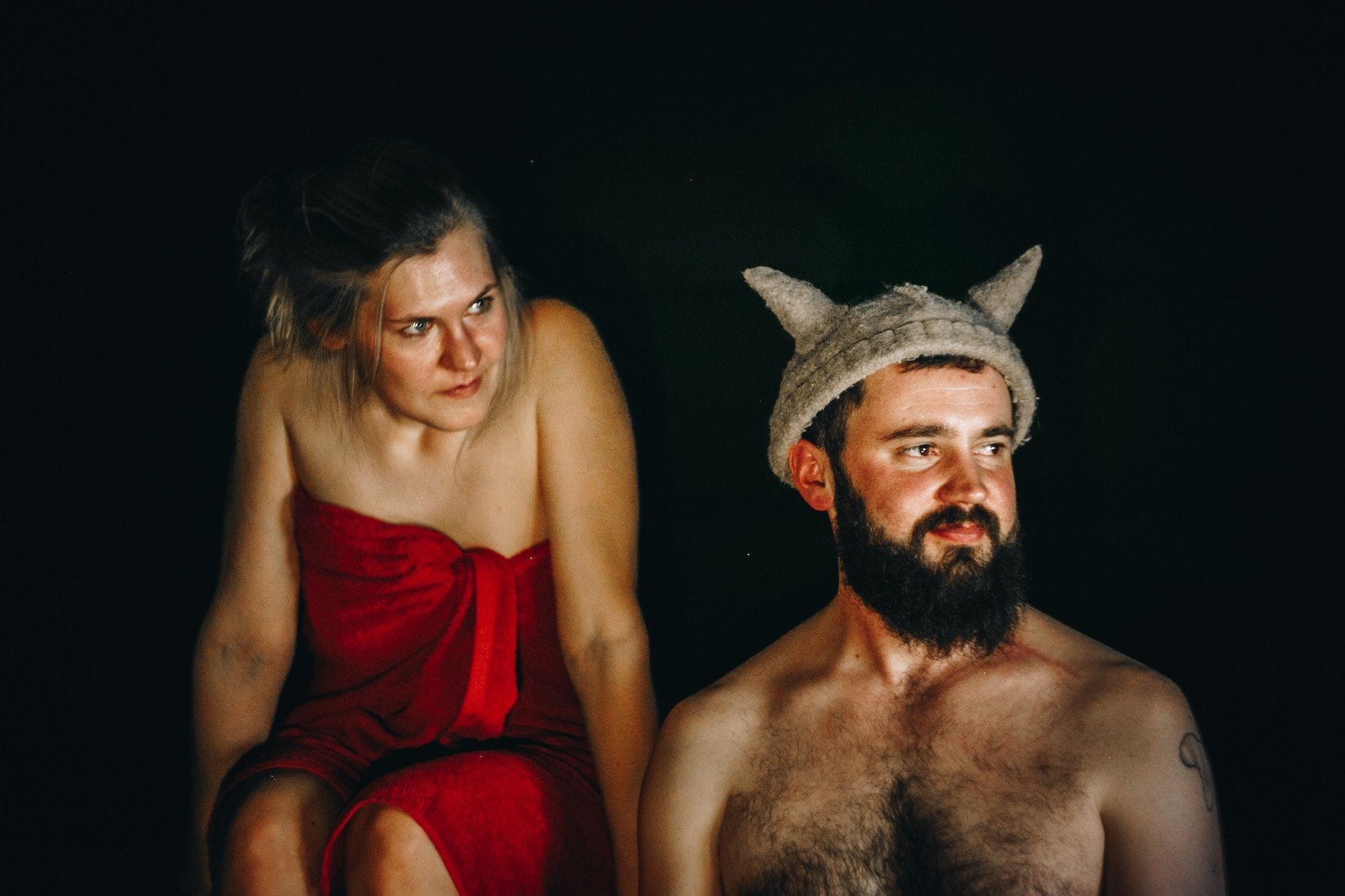 In the sauna, you need to be attentive as well. Because there is also something as too much water on the glowing stones, creating heat waves of moist air that make you cringe from the heat. But oh, oh. Those Finns know what is best after a day in the cold. The fire is crackling. Birch bush hang in the corner. The citizens of Helsinki use them to hit themselves, stimulating their blood flow. I am in the smoke sauna of Löyly. The scent of tar fills the air. The sauna complex is situated on the most southern tip of the peninsula that forms Helsinki. Finland has more than three million saunas in total. When a house is built, they generally build the sauna first. The most important comes first. There’s a Finnish saying that goes: when booze, sauna and tar can’t help, the disease is fatal. I feel fully alive. Especially when, after the hot sauna, I take a traditional dive into the ice-cold sea water. Afterwards, I sit sluggishly on the wooden deck and stare dreamily over the Gulf of Finland. Helsinki feels warm like a crackling log fire.

Helsinki is a two-hour flight from Schiphol, Amsterdam. Direct flights go from €175,-. We took Finnair.

The quality of the restaurants in the Finnish capital is high. The prices are similar to prices in the Netherlands, even though alcohol is a little more expensive. But that should not spoil the fun. Recommendations are Emo (with a Michelin bib gourmand), and Muru (that was chosen as restaurant of the year multiple times by the Finnish Gastronomic Society.

When you go to Helsinki, it’s fast and easy to book great activities via Stopover Finland, a one-stop-shop for a great time in Finland.

Surely, the best is Hotel Haven. A very nice five-star hotel, indeed, close to the harbour. Around the corner of Market Square. In short, a beautifully central hotel for rather reasonable prices, starting from € 175,-. The rooms are large and well decorated, and the bar of the hotel serves around two-hundred-fifty whisky’s and rums. You can’t finish them all.

Well, whoever says Helsinki, says sauna. And there are some choices in town. Every one of them special. We will name three. Kotiharjun Sauna, the last public sauna in Helsinki to be heated with open fire, Löyly, because of its exquisite architecture on the coast, and Sauna Saari, because it’s on an island and can be rented out in its entirety.