For the sake of peace
Church of the Holy Sepulchre

Eloquent chants sound from one corner, the murmur of prayer from another. Priests and their followers walk in procession through the space, which is filled with the scent of incense. Everywhere I look, there is movement, everywhere there are the colors of religious robes. It’s hard not to be impressed. I certainly am. There are many church dignitaries and their assistants here. And believers, pilgrims. But probably at least as many tourists: people who have come to see the most famous and holiest Christian church in the world.

This is the Church of the Holy Sepulchre, the location where, according to tradition, Christ was crucified, died, was buried and resurrected on the Third Day. It is an awe-inspiring place for believers and non-believers alike. The atmosphere is not exactly one of serenity. It is different from what Christian churchgoers are used to in their own places of worship. There are reasons for this. First of all, there is the constant presence of pilgrims and tourists. But the fact that no less than six different Christian denominations make use of the church also plays a role. The Church of the Holy Sepulchre is cherished by Catholics, Greek Orthodox and by Armenian Orthodox – the three most influential churches -, as well as by Coptic Orthodox, Syriacs and Ethiopian Orthodox. They jointly own the church and may all call a certain sector in the building their own. All of them have their time slots for celebrations and rituals. It is all laid out in narrowly defined, though unwritten, agreements. Note: Protestant churches are missing. By the time they came into development, all the positions in the Church of the Holy Sepulchre had already been taken. 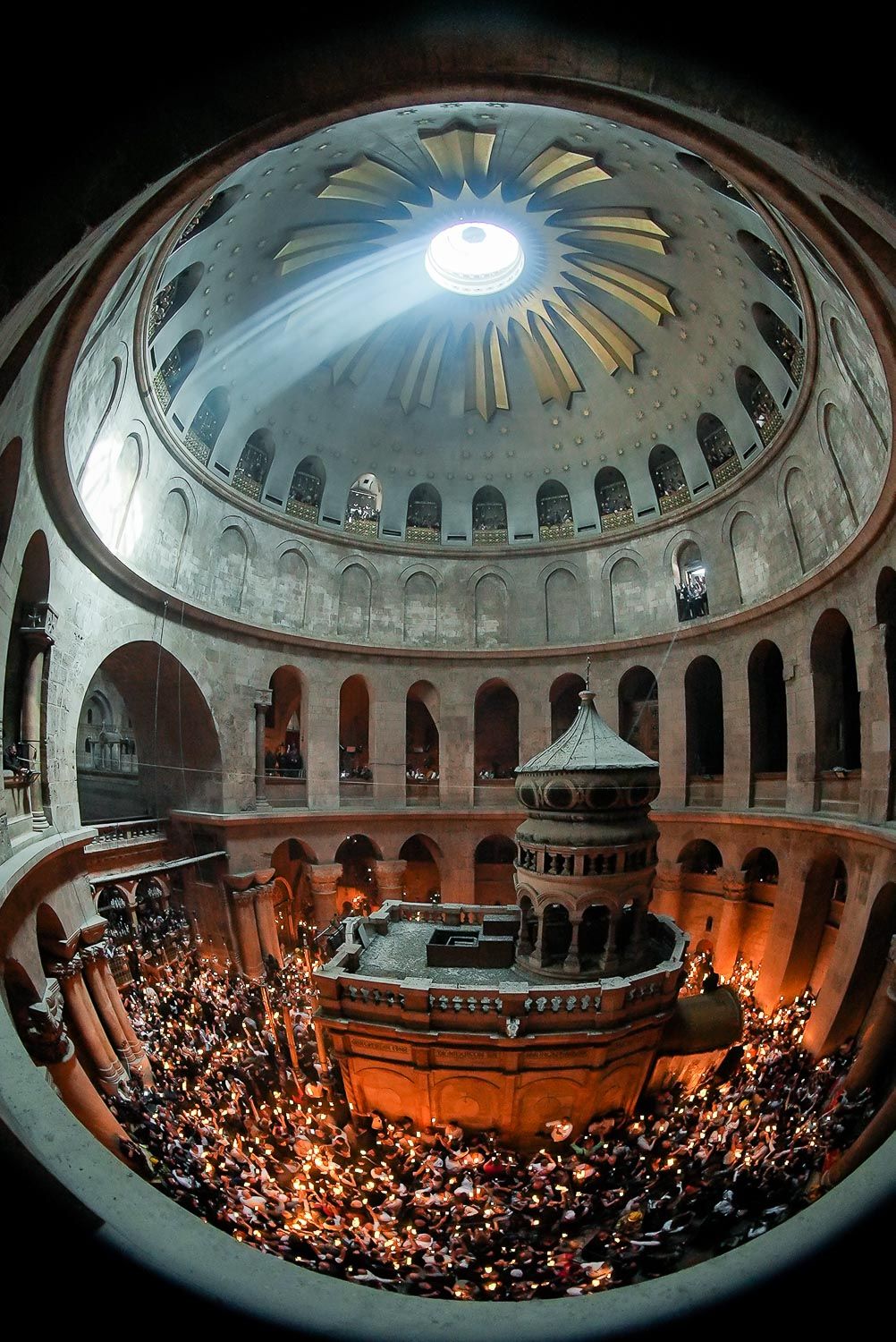 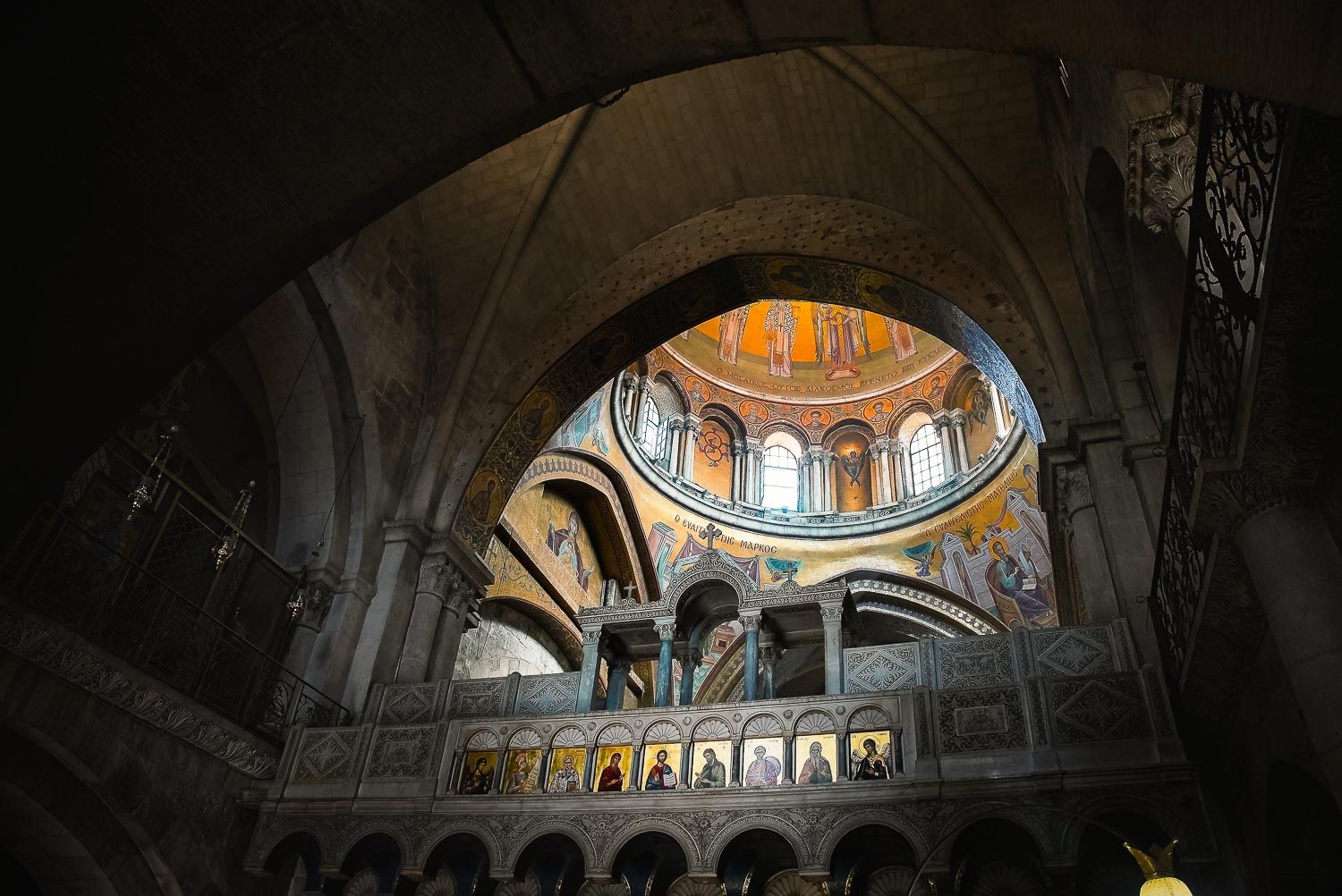 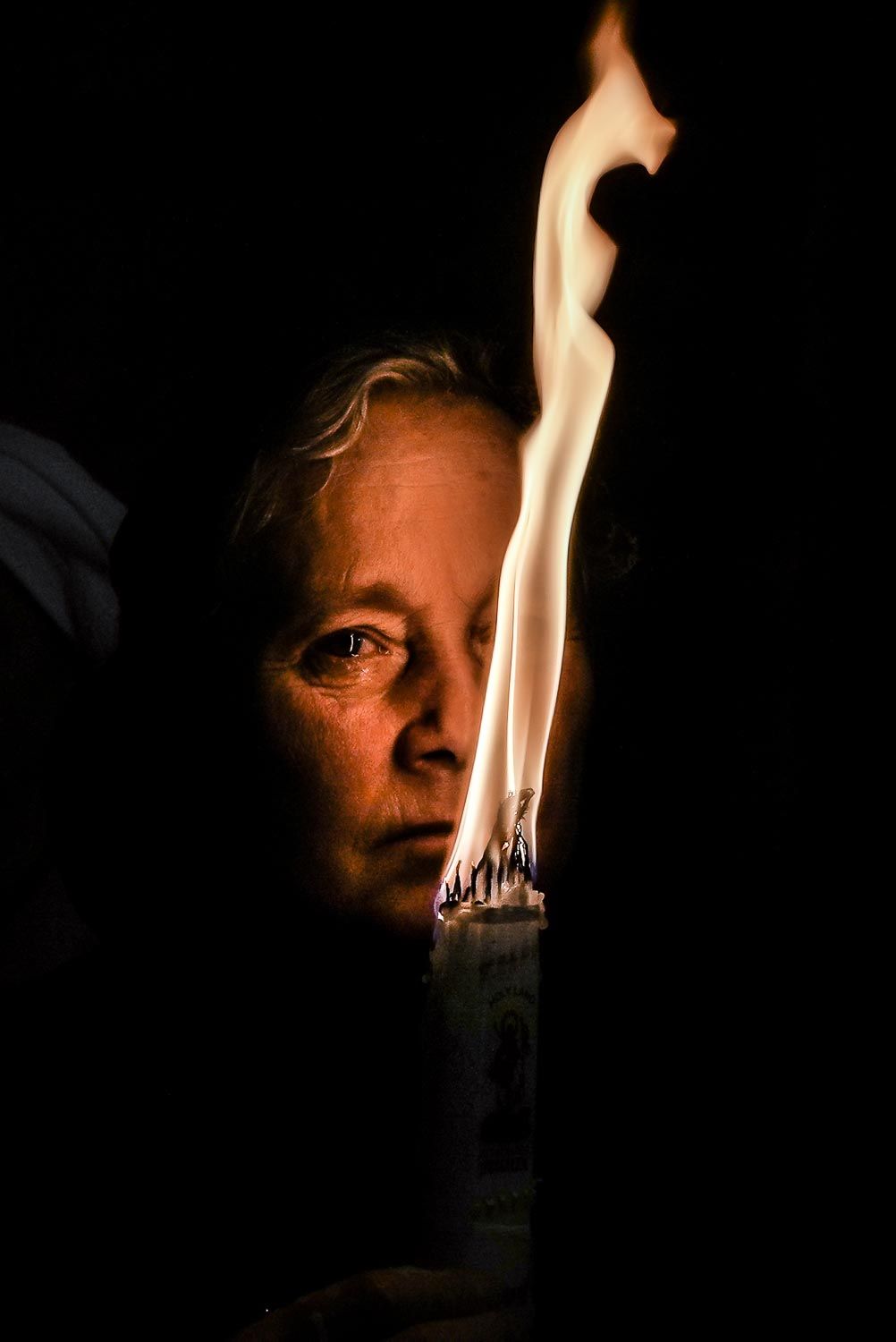 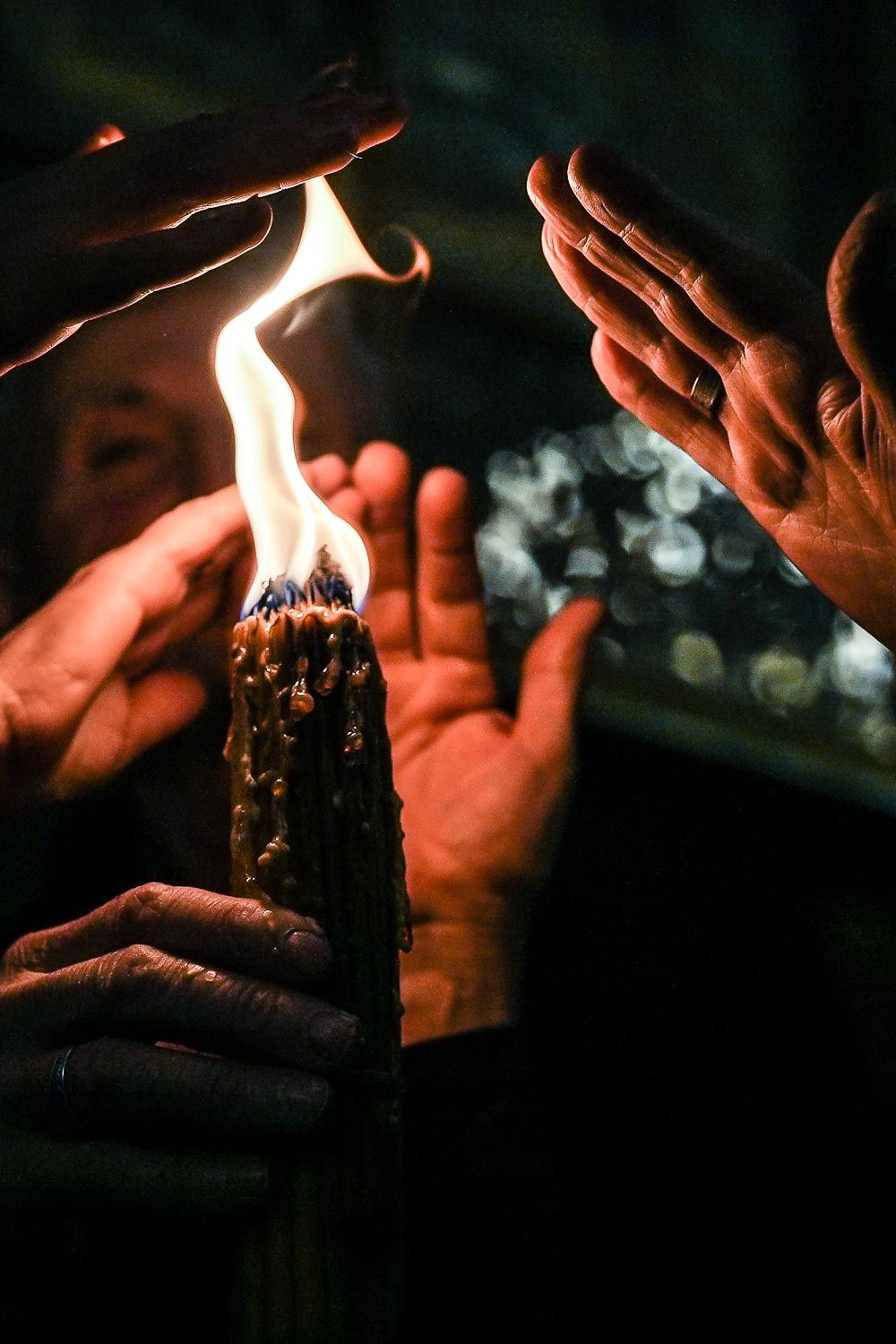 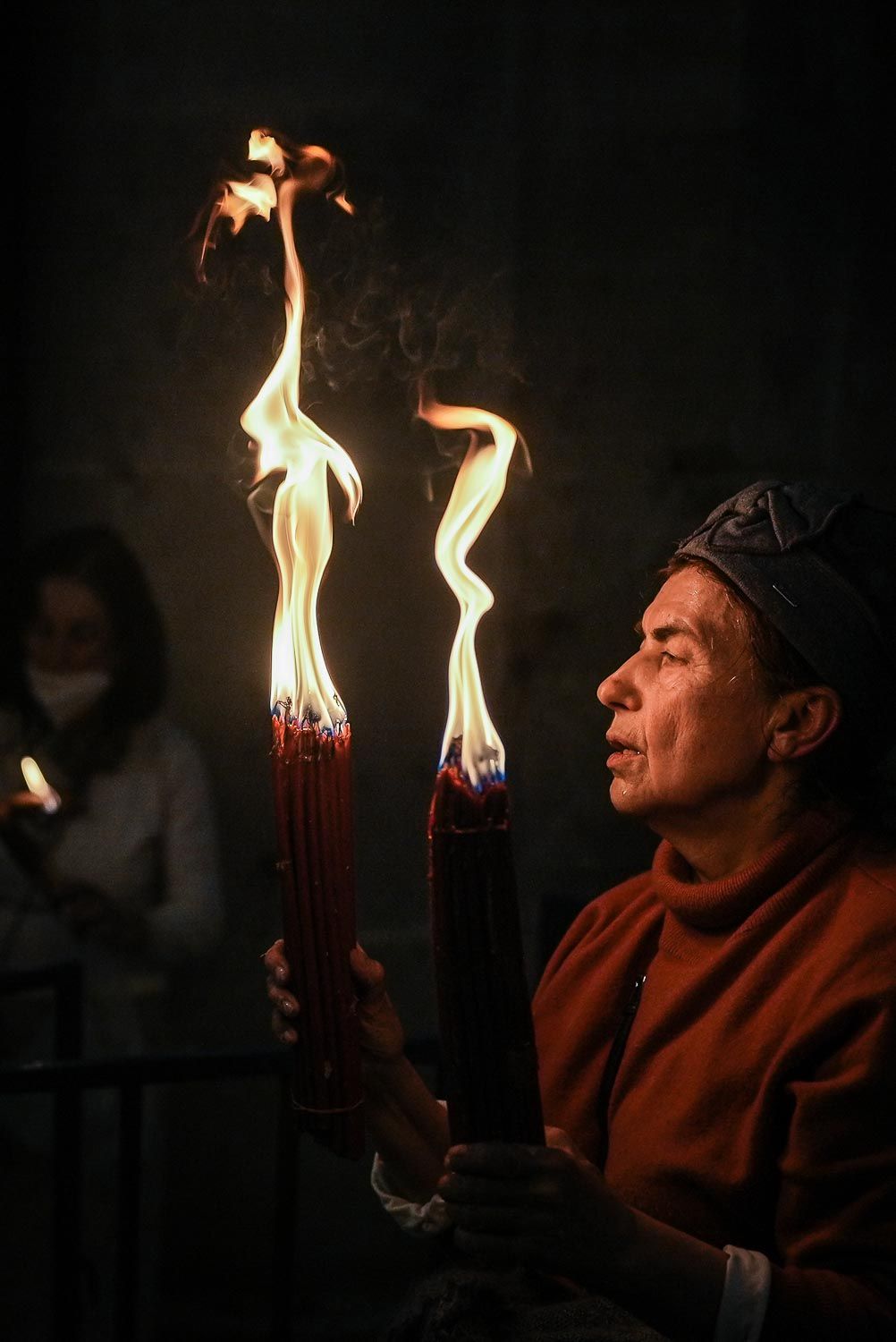 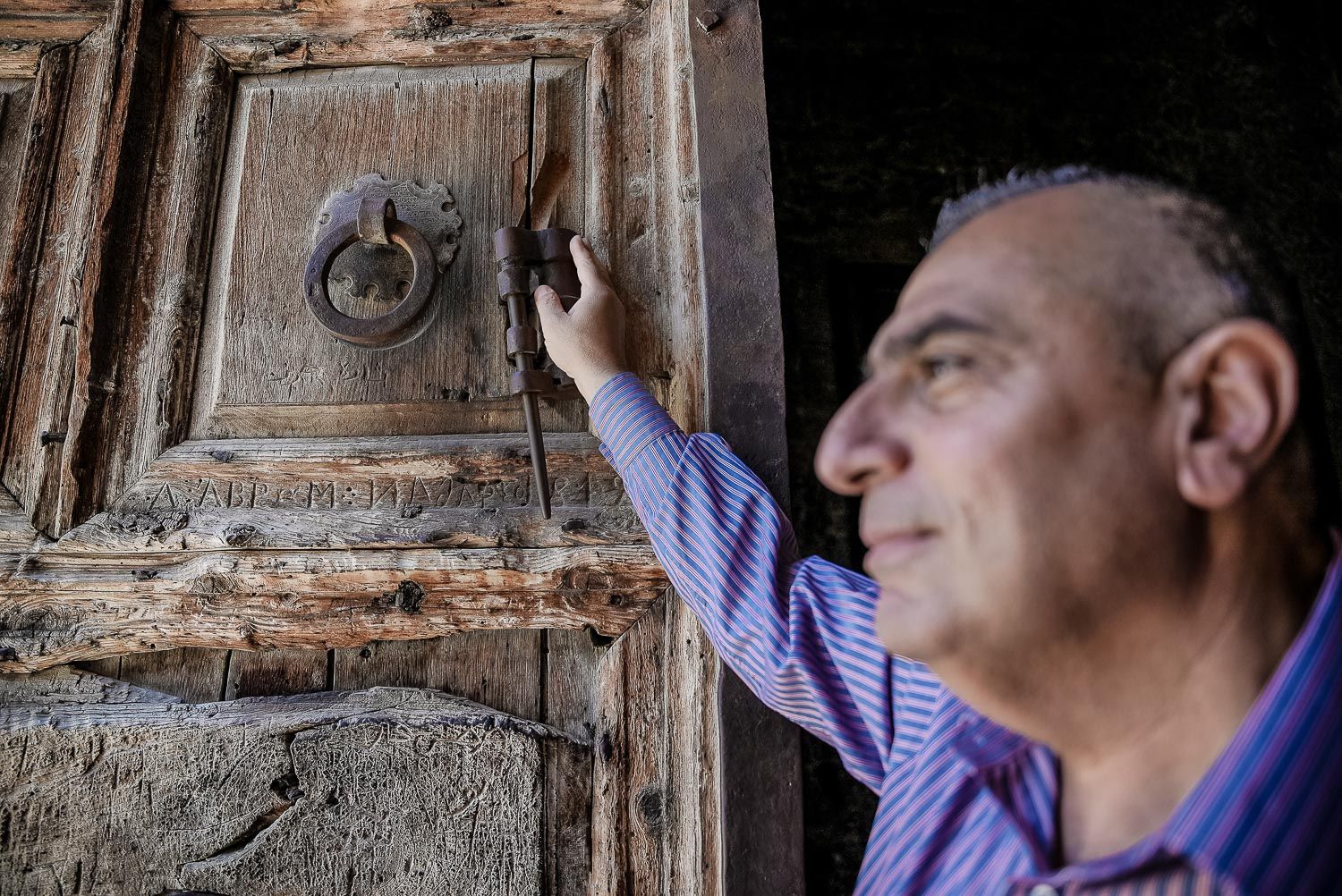 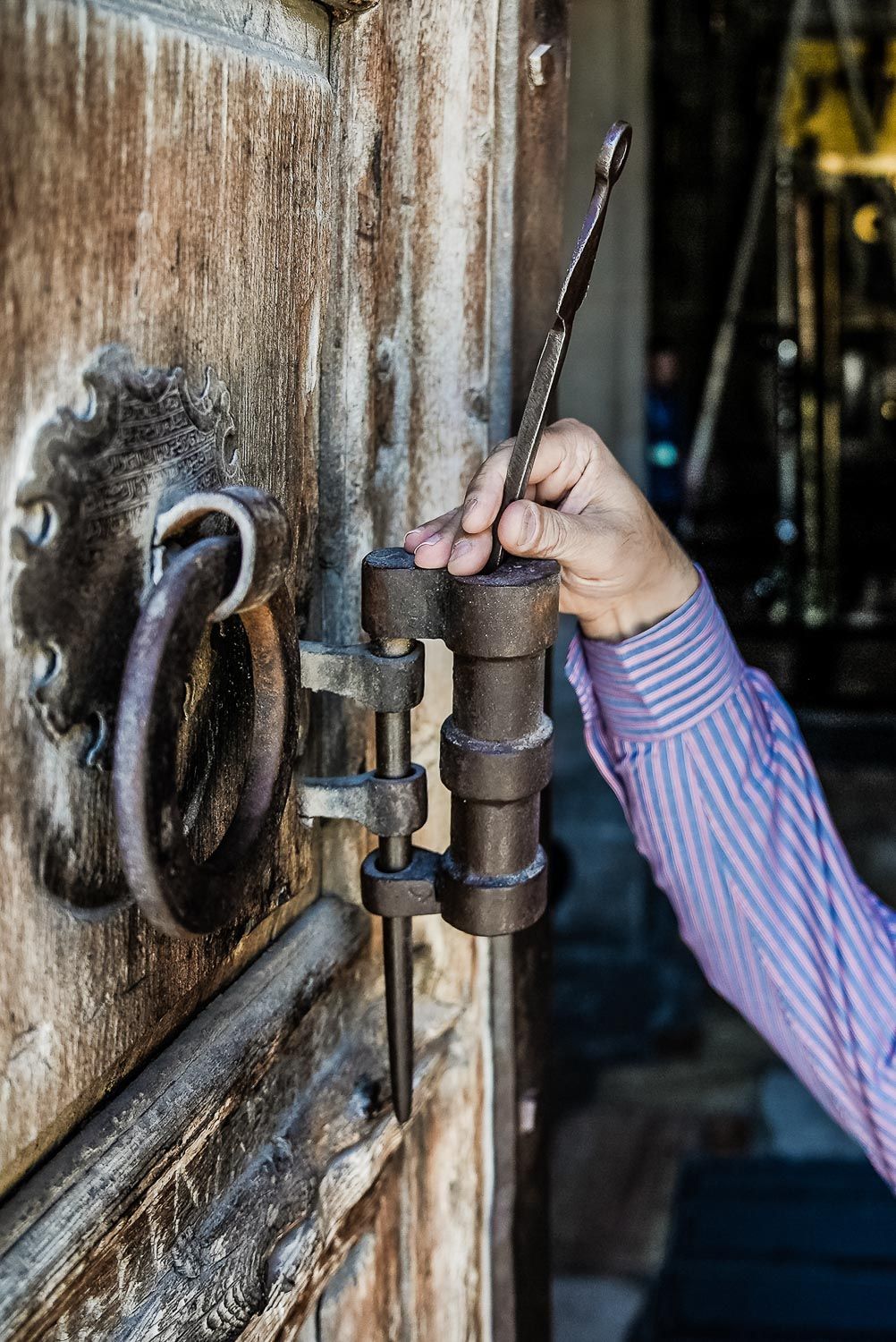 BALANCE OF POWER
For the history of the Church of the Holy Sepulchre, we must go back to the fourth century. Then Helena, mother of Constantine the Great, the first Roman Emperor to be converted to Christianity, made a pilgrimage to Jerusalem. There, on the site where early Christians believed Christ was buried, she encountered a ‘pagan’ temple dedicated to the goddess of Venus. On Helena’s request Constantine had the temple destroyed, after which Helena found three crosses under the rubble. She had no doubts: these had to be the crosses to which Christ and the two murderers had been nailed. When a sick man touched one of the crosses and was subsequently healed, it was clear which of the three was the True Cross.
Helena had the first Church of the Holy Sepulchre Cross built. It would be destroyed, rebuilt and expanded several times over the centuries. With the arrival of the Muslim general Salah ad-Din Ayyub (‘Saladin’) in Jerusalem, the church entered a new phase and the key to the holy building ended up in Muslim hands. That situation continues to this day. About that, the current custodian of the church, Adeeb Joudeh, has an interesting story to tell.

“In 1187 Salah ad-Din  appointed a Muslim key keeper. I am the 28th generation of custodians of the church”

‘In 1187 Salah ad-Din expelled the crusaders,’ he tells, sitting near the entrance of the church. ‘He was a wise man and did not want the Church of the Holy Sepulchre to be destroyed by Muslims after his death, as had happened before. So he appointed a Muslim key keeper. That was an early ancestor of mine. I am the 28th generation of custodians of the church.’
To ensure a well-balanced distribution of power, Salah ad-Din appointed a second person to actually open the church doors, after the key keeper had handed him the key. This was a member of the Nusseibi family, which holds the position to this day.
‘The church closes daily at nine o’clock in the evening. Then I go home to sleep, but in the church the Greek Orthodox then start praying until morning. At half past three in the morning, I go back to the church so that it can be opened. I give the key to the representative of the Nusseibi family. The latter knocks on the door, after which a Greek Orthodox priest opens a hatch in the door and hands over a ladder. You must keep in mind: the top lock of the church door is located five meters above the ground. 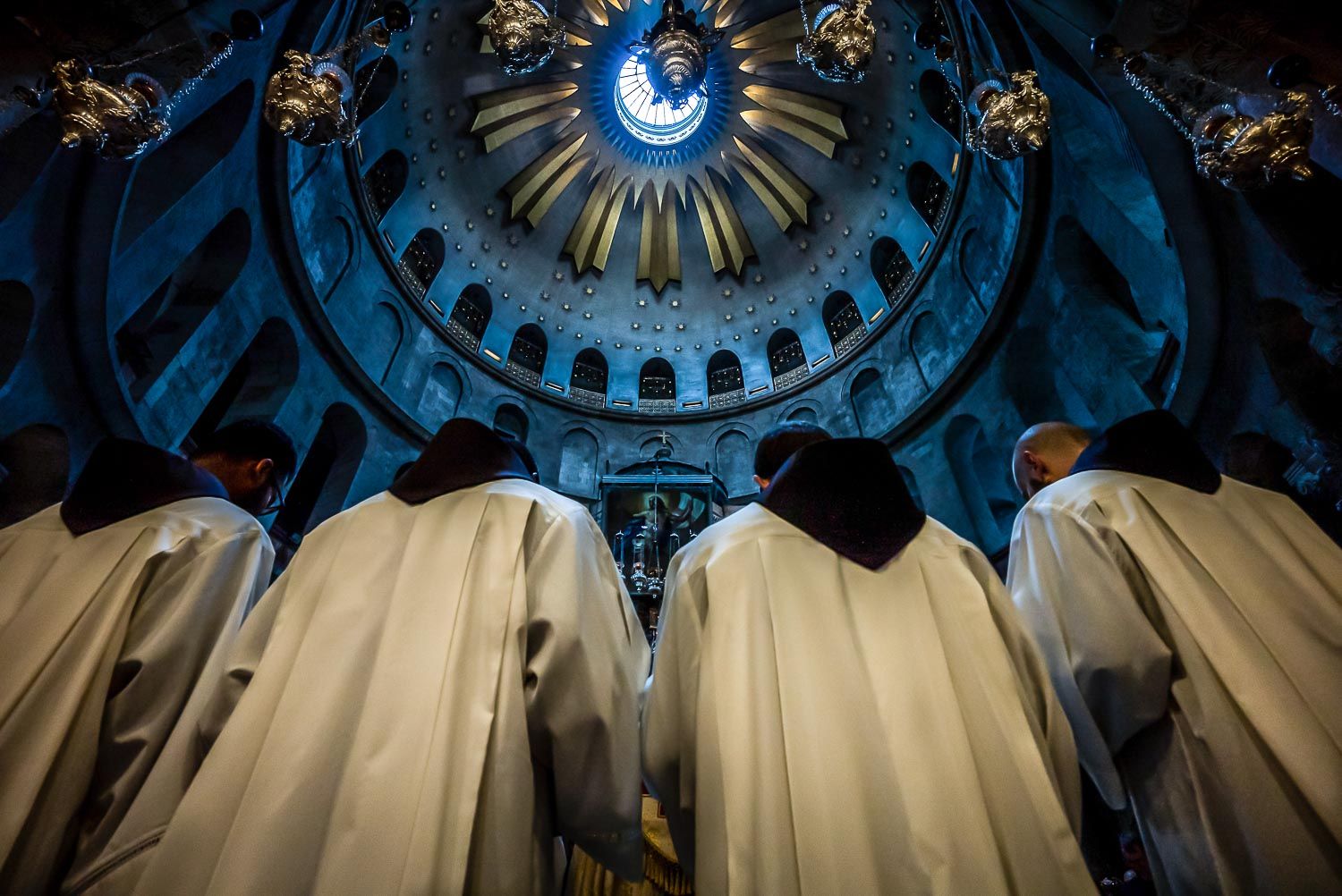 NEVER LOST THE KEY
Mr. Joudeh takes out the key, which he usually carries with him during the day. It is a hefty object, weighing 250 grams. ‘It dates from 1149, so 39 years before the arrival of Salah ad-Din.
Originally, by the way, there were two keys. One of them was broken 500 years ago, but this one is fortunately still intact. No, it has never been lost in all these years. I did lose my house keys once, but I really carry this key in my heart.’ And then, with a smile, ‘Maybe it will give me access to paradise.’
Being a key keeper of the Church of the Holy Sepulchre may be an authoritative and responsible position, but it is not remunerated. Fortunately, Adeeb Joudeh is part of a prominent and affluent Jerusalem family. The Joudehs own a lot of real estate and stores and derive their income from that.

“There are stories of struggles between the Greek and Armenian patriarchs, with people blowing out each other’s fire”

‘My father was the last leader of the Al Aqsa mosque. He died in 1992. From him I learned everything. One of the things I am most proud of is being allowed to affix my seal to the tomb, the Aedicula, in the middle of the church. That is an Easter ritual. On the Saturday before Easter, together with the Greek Orthodox and the Armenian patriarchs, I enter the tomb to check that there is no fire there. Then both patriarchs remain in the tomb and I will seal the space.’
Before continuing my his story – a story that will surprise me, he assures me – he orders two coffees from a passing vendor. Then he begins to tell.
‘The two patriarchs kneel down and pray. And then, without anyone being able to see, the miracle takes place. A bluish Sacred Fire rises from the tomb. The Greek Orthodox patriarch receives it through a candle. Then he opens the door, breaks my seal and comes out with the Holy Fire. The patriarch shares the fire with the Armenians and the Copts, who also pass it on. Then it is taken to other places, such as Bethlehem, Ramallah and Gaza and also to the Orthodox churches in other countries all over the world. For it is the Orthodox churches in particular that believe in this miracle.’
The ritual of the Holy Fire has not always gone smoothly over the centuries. There are stories of struggles between the Greek and Armenian patriarchs in the Aedicula, with people blowing out each other’s fire and other less exalted scenes. 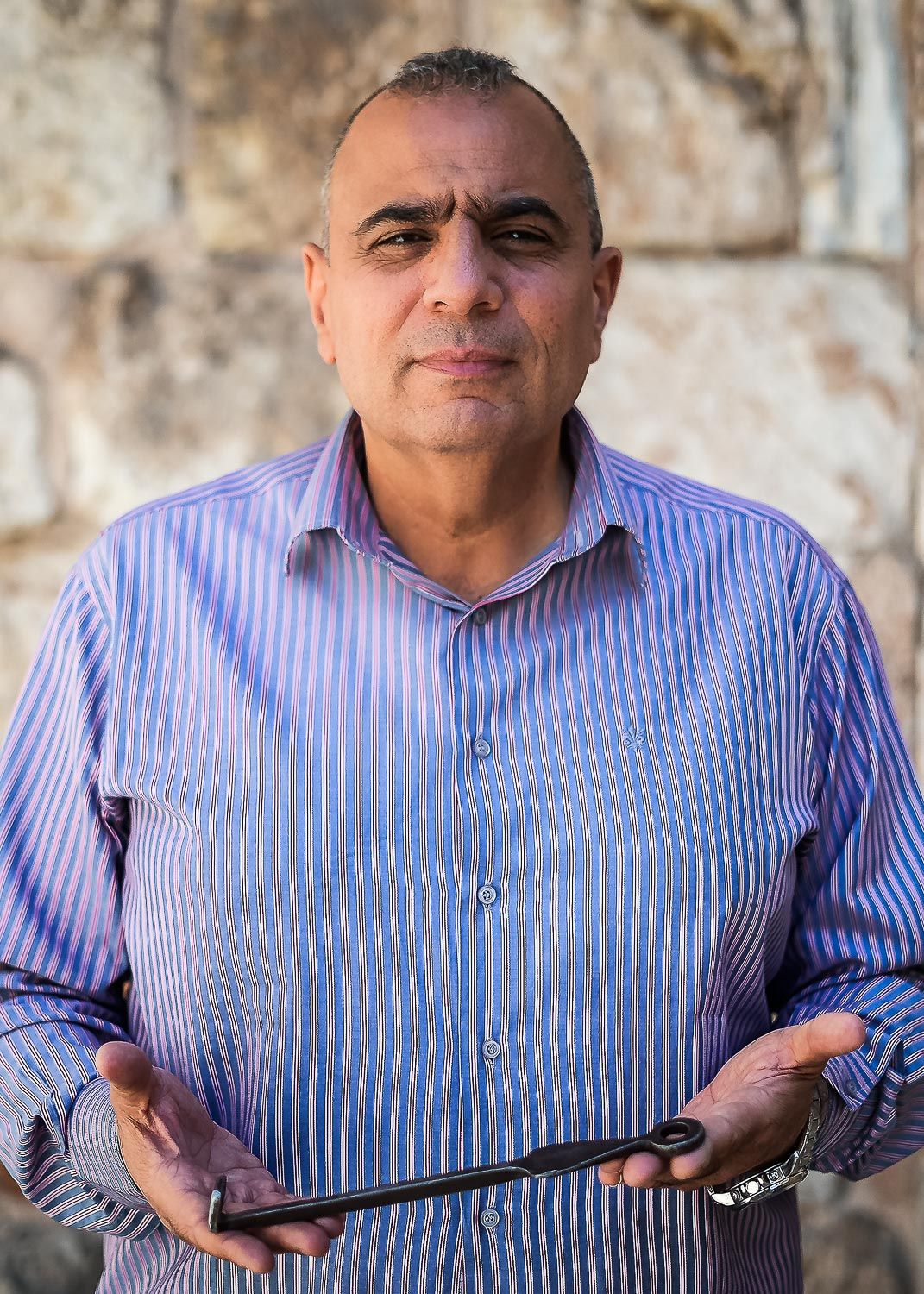 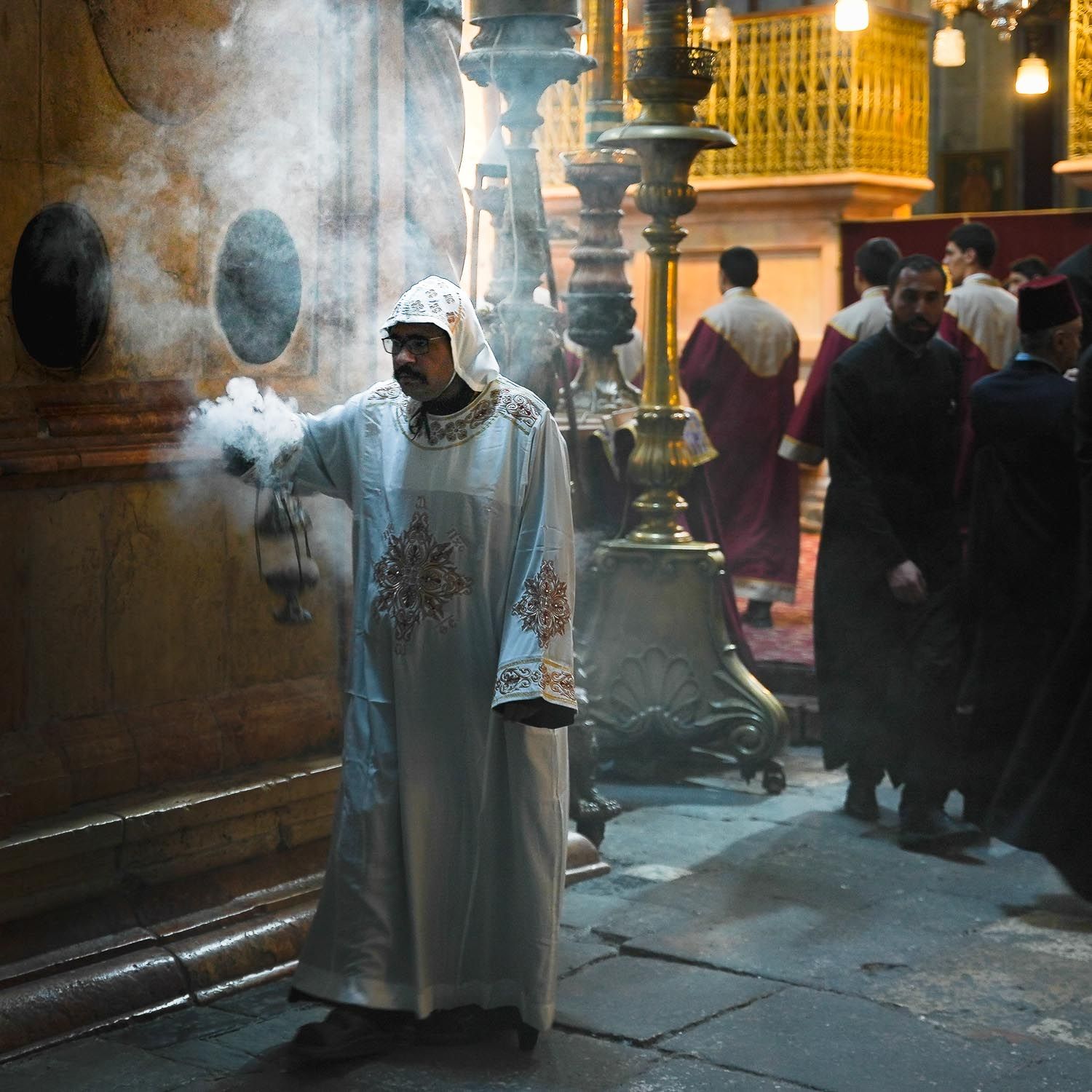 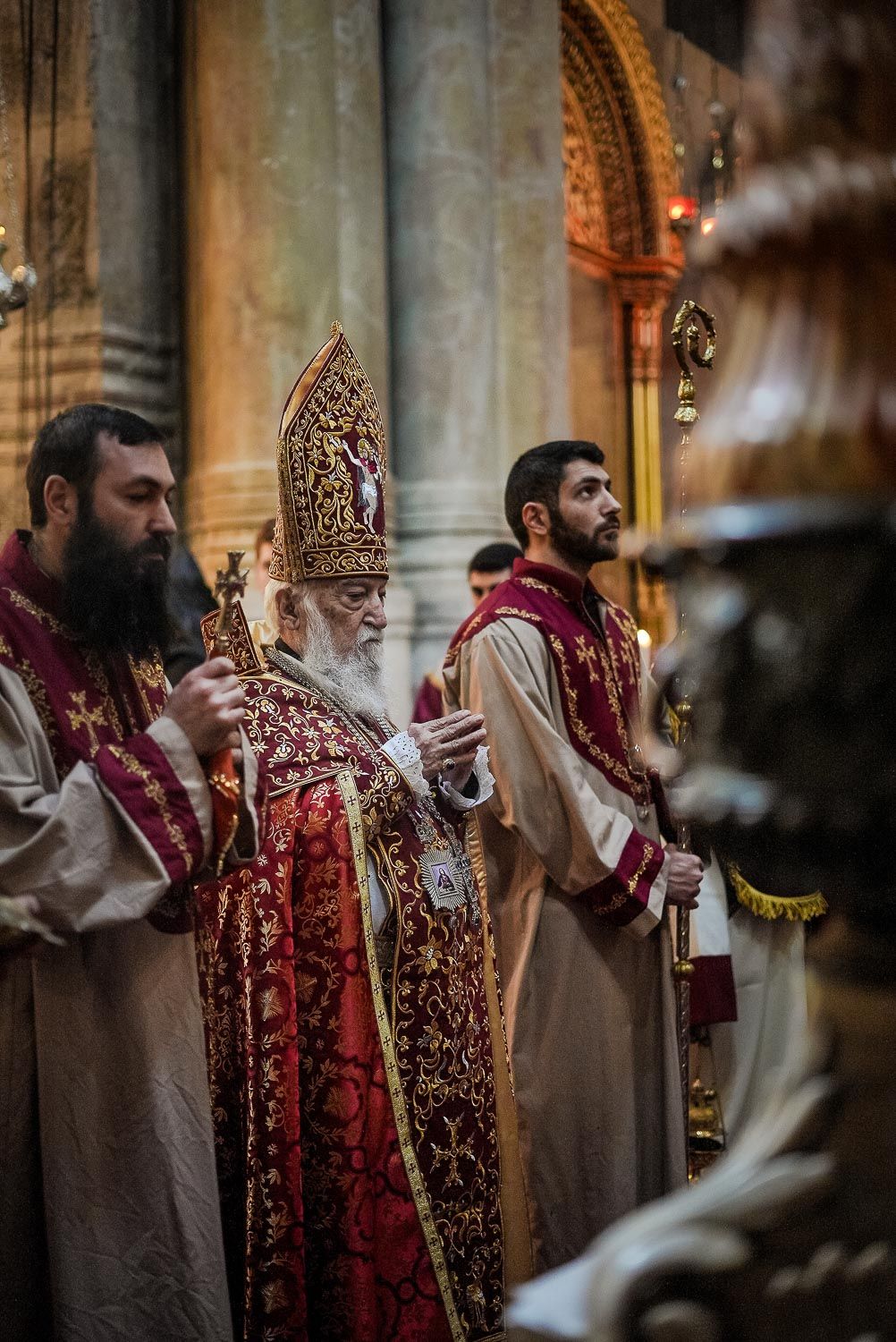 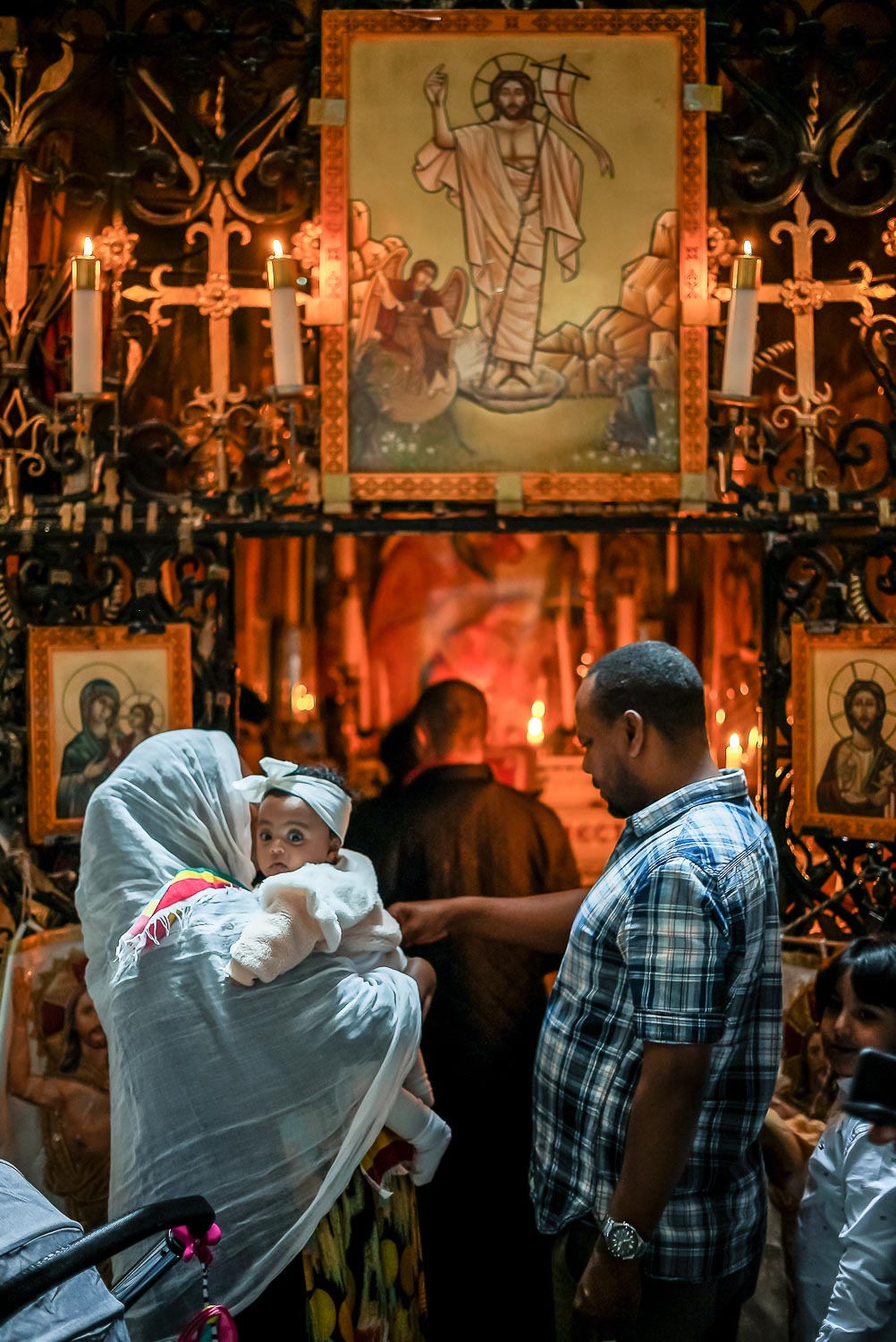 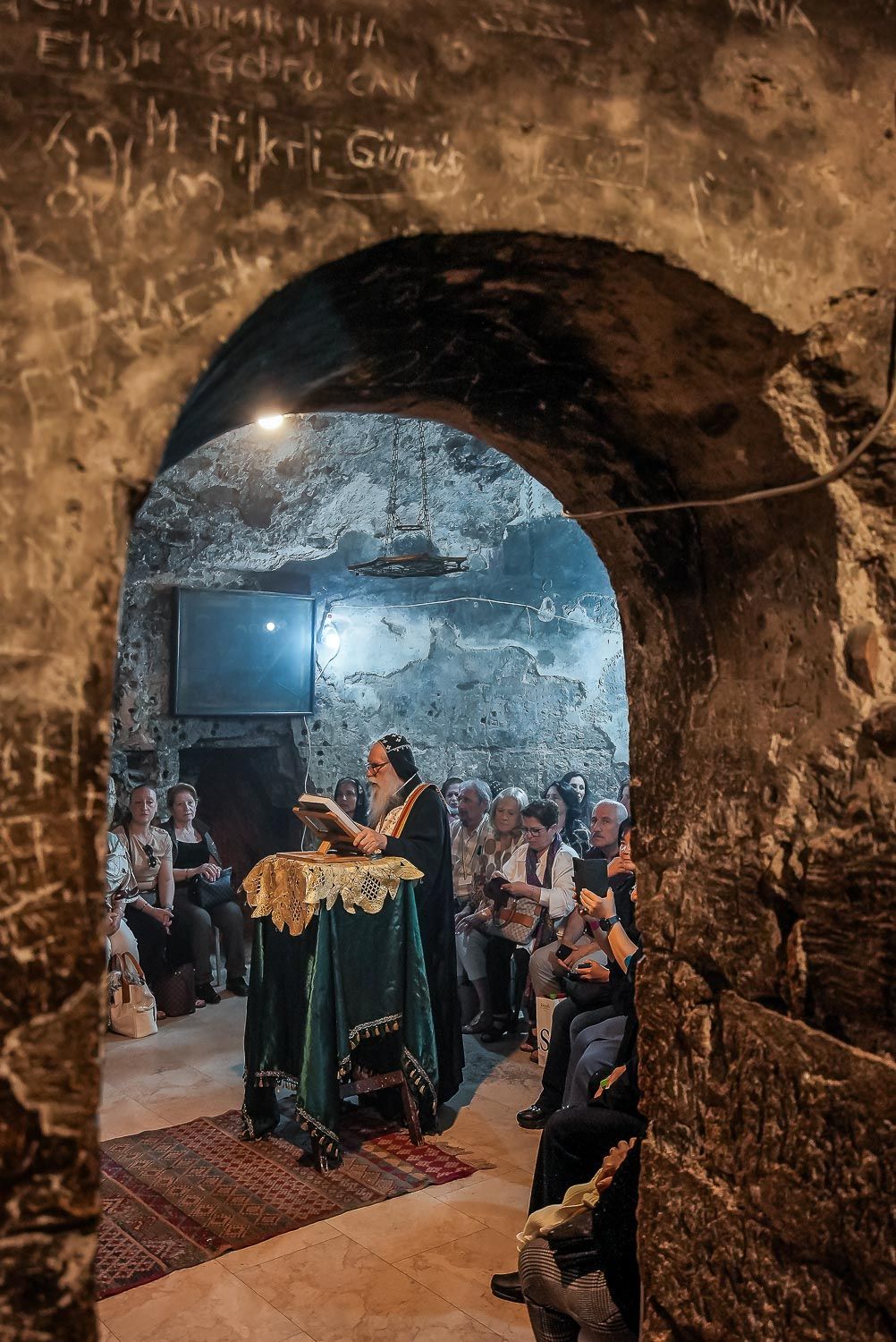 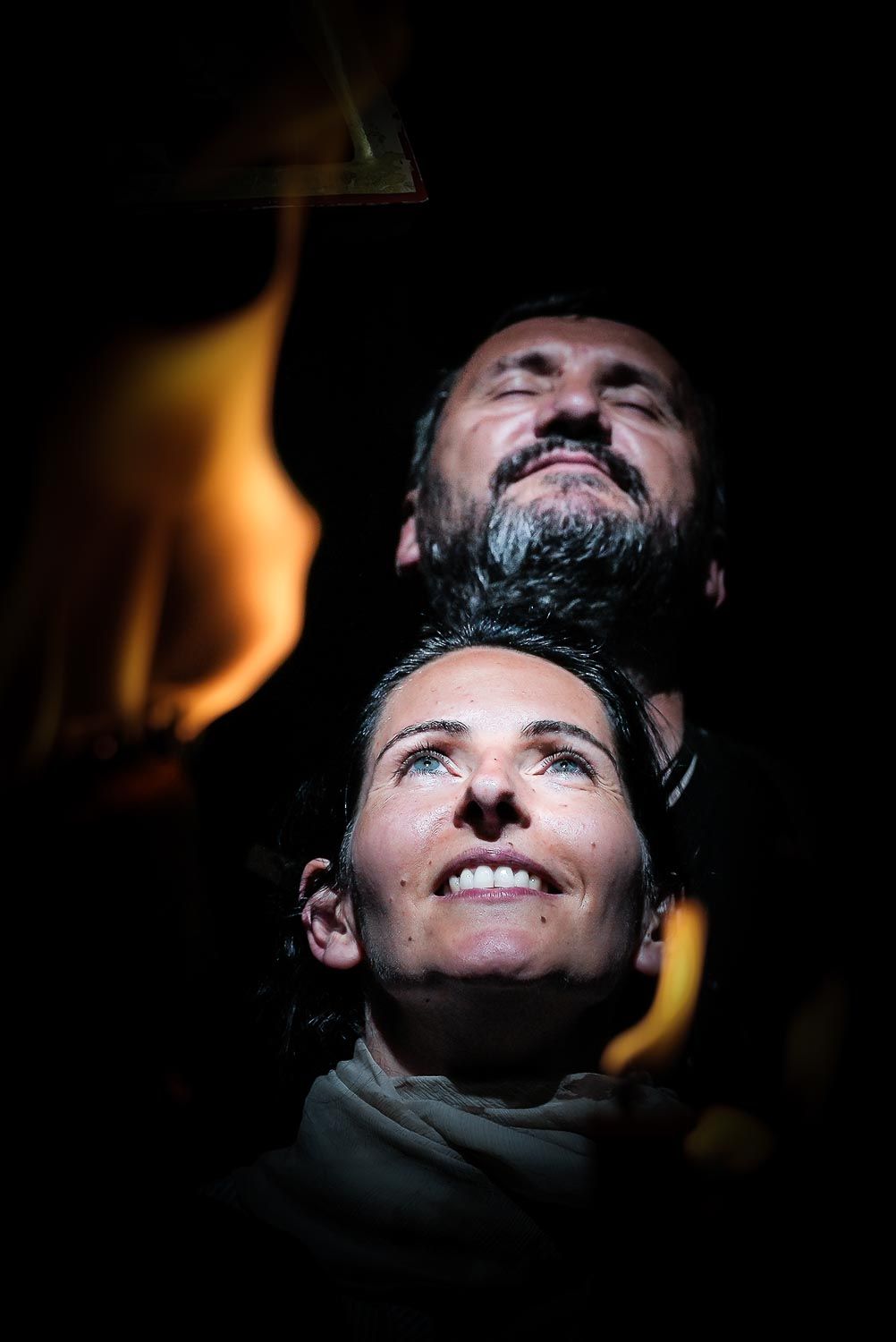 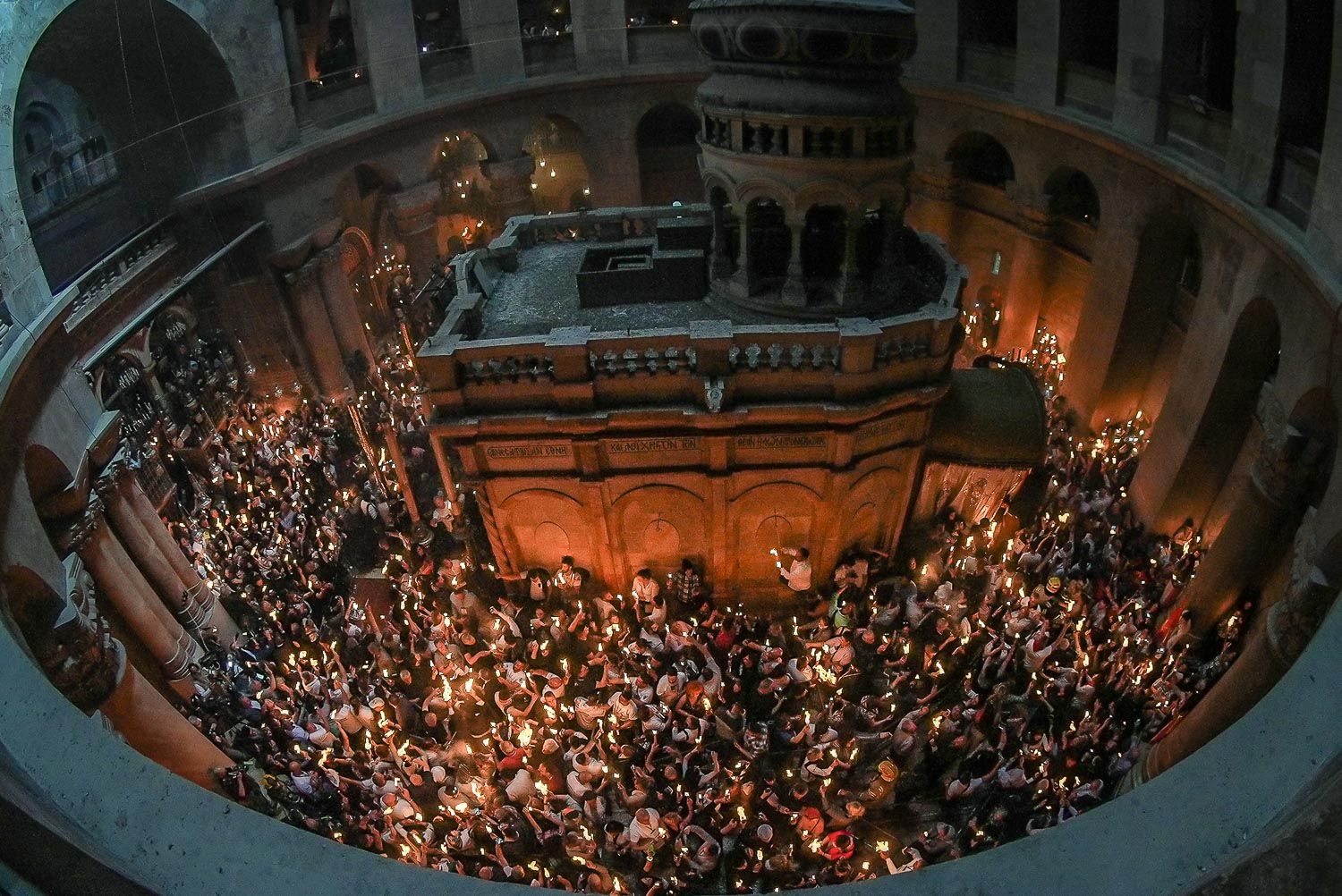 OTTOMANS ESTABLISH THE STATUS QUO
The story surrounding the ritual of the Holy Fire illustrates the delicate balance between the various Christian denominations associated with the Church of the Holy Sepulchre. A balance that can be upset by the smallest event. After centuries of skirmishes between the various religious directions, the Ottomans decided in 1757 that a so-called Status Quo should be established. For the Church of the Holy Sepulchre, but also for Bethlehem and the Tomb of Mary. This Status Quo meant that from that moment on the existing situation was not allowed to be changed. The daily opening and closing ritual of the church is part of it, just like the ritual of the Holy Fire. But the Status Quo also decides who is allowed to organize which celebrations at what time and place, how many candles may be burned and who may light them. Even the cleaning work is strictly supervised. Sweeping a floor tile in an area of the church assigned to another denomination is out of the question. Because sweeping the tile suggests that it is yours.

For Father Alberto Pari, from Italy, it means that he cannot use his favorite musical instrument in his musical activities in the church. Father Alberto is a member of the Franciscan Order, which traditionally makes up the Roman Catholic representation in the Church of the Holy Sepulchre. He is a musician and sees it as his duty to keep the tradition of Latin as a language and Gregorian chant as music alive. He is first cantor at the solemn mass held in the church each morning and sings the antiphon, or preface, to the Gregorian chants.
‘We sing morning mass with small choir of brothers’, he explains, ‘accompanied by a brother who plays the organ. Because I play the flute, I would have liked to use that instrument as well. But the Greek Orthodox did not allow this. When the Status Quo was established, the organ was one of the instruments in use, but not the flute. I hardly play it anymore. But singing also gives me great pleasure and satisfaction.’ On request, Father Alberto sings the ‘Hymn for Pentecost’, one of his favorites, in a steady and clear voice:

Or: Come, Holy Ghost, Creator blest/ and in our hearts take up Thy rest/ come with Thy grace and heav’nly aid/ To fill the hearts which Thou hast made.’ 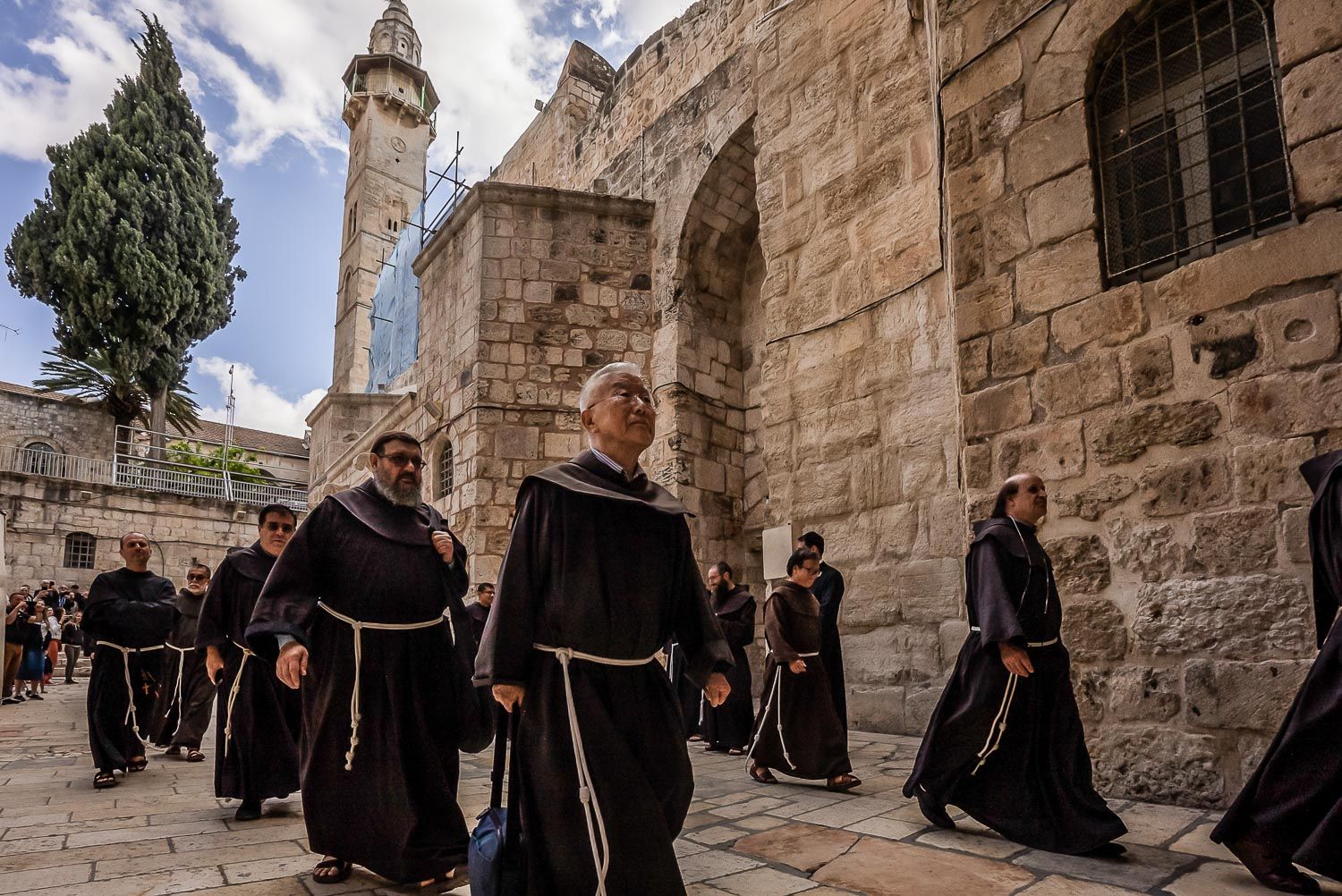 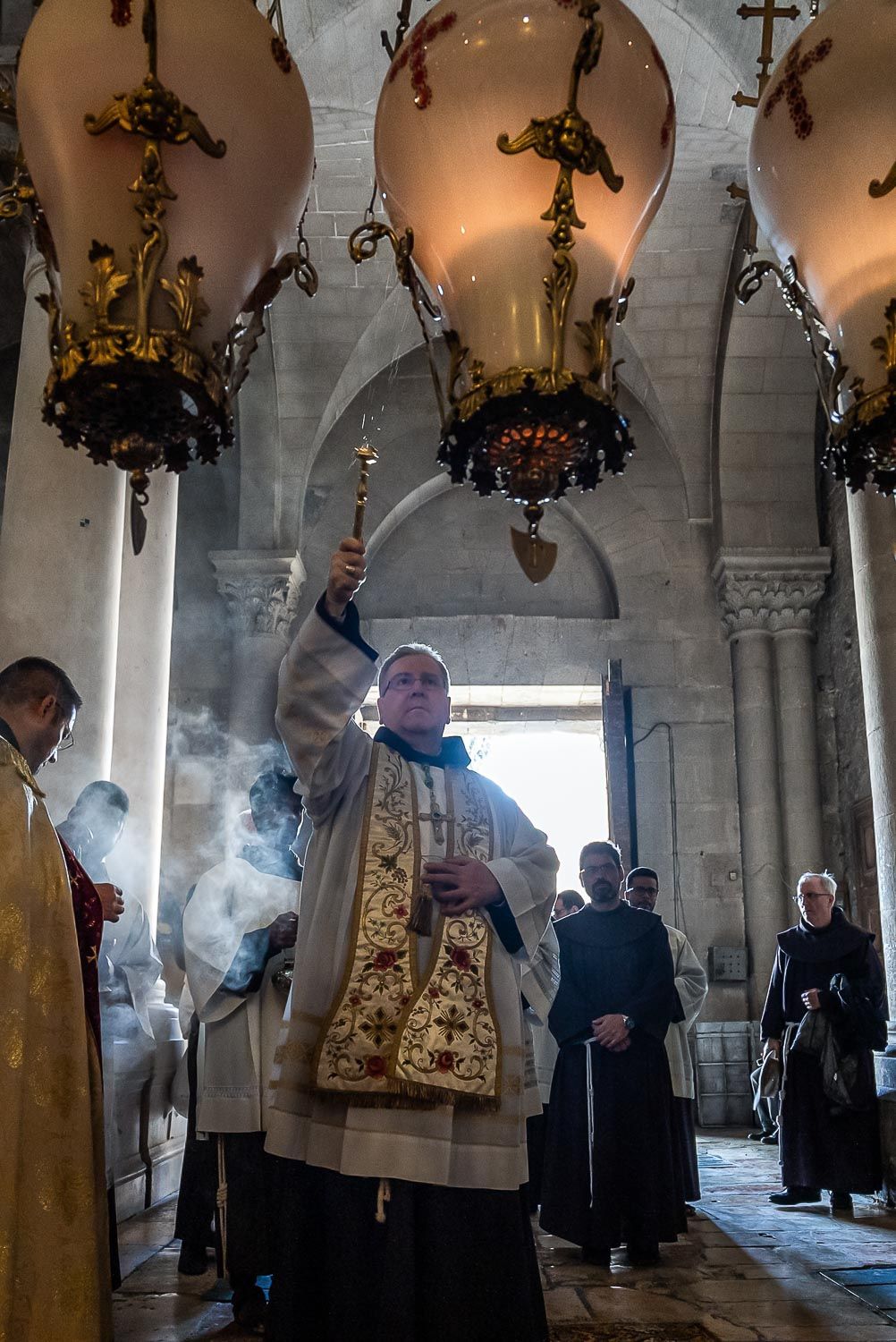 LADDER MUST REMAIN
As mentioned above, members of the Joudeh family are the key custodians of the Church of the Holy Sepulchre. Except for one day in the year: Maundy Thursday, of Holy Thursday, when the commemoration of the Last Supper is celebrated. Then the key is given to the Catholics for 24 hours.
‘On that day, we gather at the entrance to the Convent of the Holy Redeemer, where I live myself,’ Father Alberto explains. ‘From there we go in procession to the Cenacle, the place where the Last Supper took place, then to the Armenian Cathedral of St. James and then to the Syriac Church of St. Mark. After that, the Franciscans may pray in the Church of the Holy Sepulchre, while the Greeks and Armenians pray in the square in front of the entrance. If it is raining or otherwise bad weather, they may knock on the door. Usually they are then let in, but this is not a right.’
You’ve guessed it: this too is part of the Status Quo, which has guarded the delicate balance in the church since 1757.

“If it is raining, they may knock on the door. Usually they are then let in, but this is not a right”

As I walk out of the Church of the Holy Sepulchre and turn around, I see above the entrance, resting on a ledge, a wooden ladder. No, it was not forgotten by the window cleaner, the day before yesterday. This ladder has been in its place since at least 1757, probably longer. Some say it belongs to the Armenians, others claim that it is communal property, but no one knows for sure. Only one thing is certain: that it must remain where it stands. For the sake of peace.