You will find a vast amount of Viking history in Skåne. Visit the reconstructed ring fort Trelleborgen, that actually named the town of Trelleborg, and the Viking village of Foteviken to experience how people lived back then. But who were these Vikings exactly?

“Aaaaaaaargh. Oooooooooow. Ahhhhhh,” groans the man, dressed in ragged peasant clothing from the age when the Vikings made the seas, coasts and waterways of Europe unsafe. He is clutching onto his cheek very tightly as if he is scared that it might fall off. A warrior with a sword, helmet and shield comes running over. Hopefully, all will go smoothly. The man attacks the door of an old house, falls into the house but soon gets back up. ‘Owwwww’ cries the man. The warrior grabs him: ‘what’s the matter with you?’ he asks abruptly. ‘My tooth, my tooth’ shouts the man in Danish. Oh dear: a case of toothache. Not much fun in 975, the glory days of the vicious Vikings.

Time machine
We have not stepped into a time machine, although it might seem like we have. We are in Foteviken, near the town of Höllviken on the western coast of the Falsterbo peninsula, only a half-hour drive from Malmö. Over a thousand years ago, Vikings lived in this area and the annual Halör market was held that drew in traders from all over Scandinavia. There was also the great battle of Fotevik and in 2001 the open-air museum Foteviken was founded here. It depicts how a town during the Viking period or Early Middle Ages would have looked. 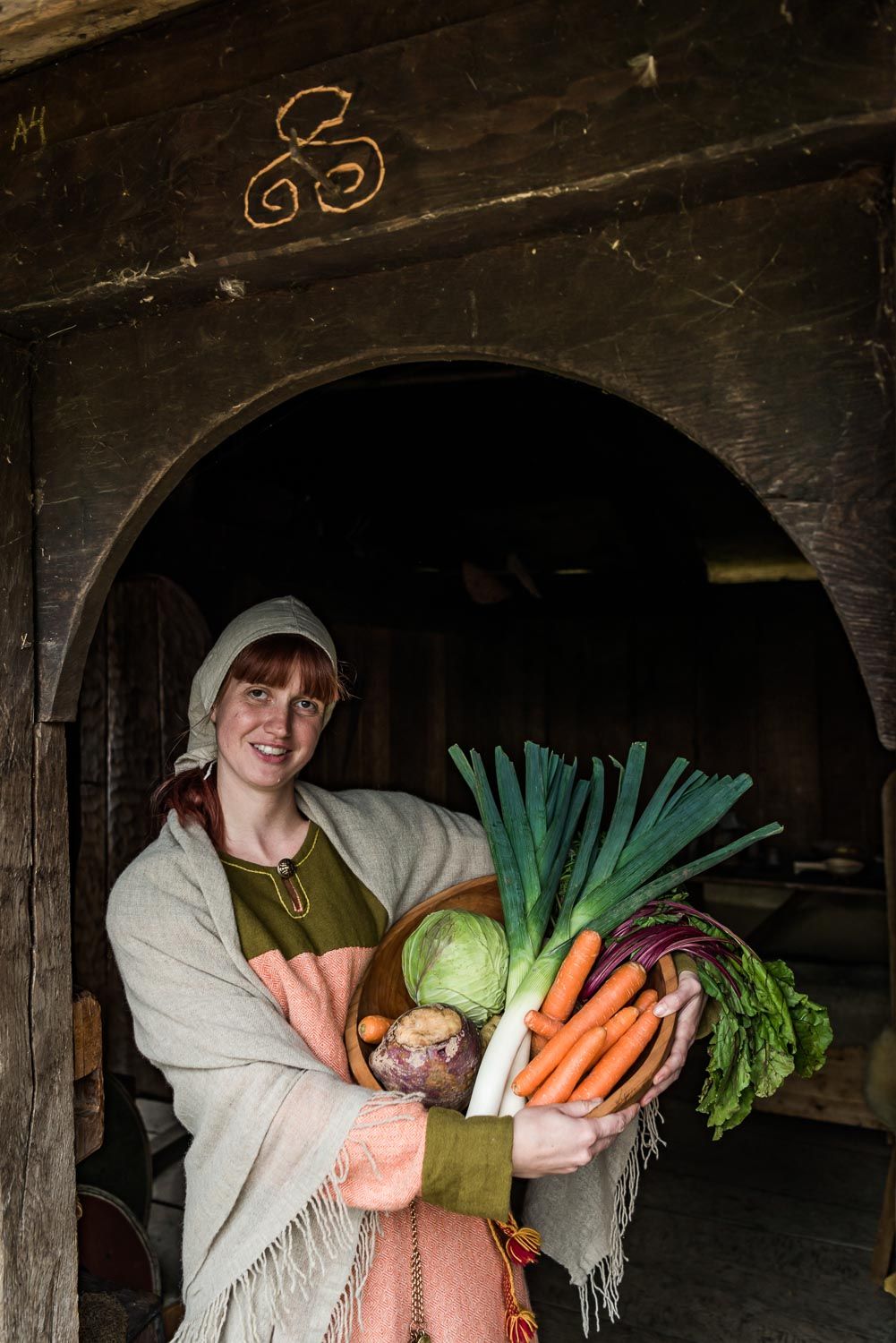 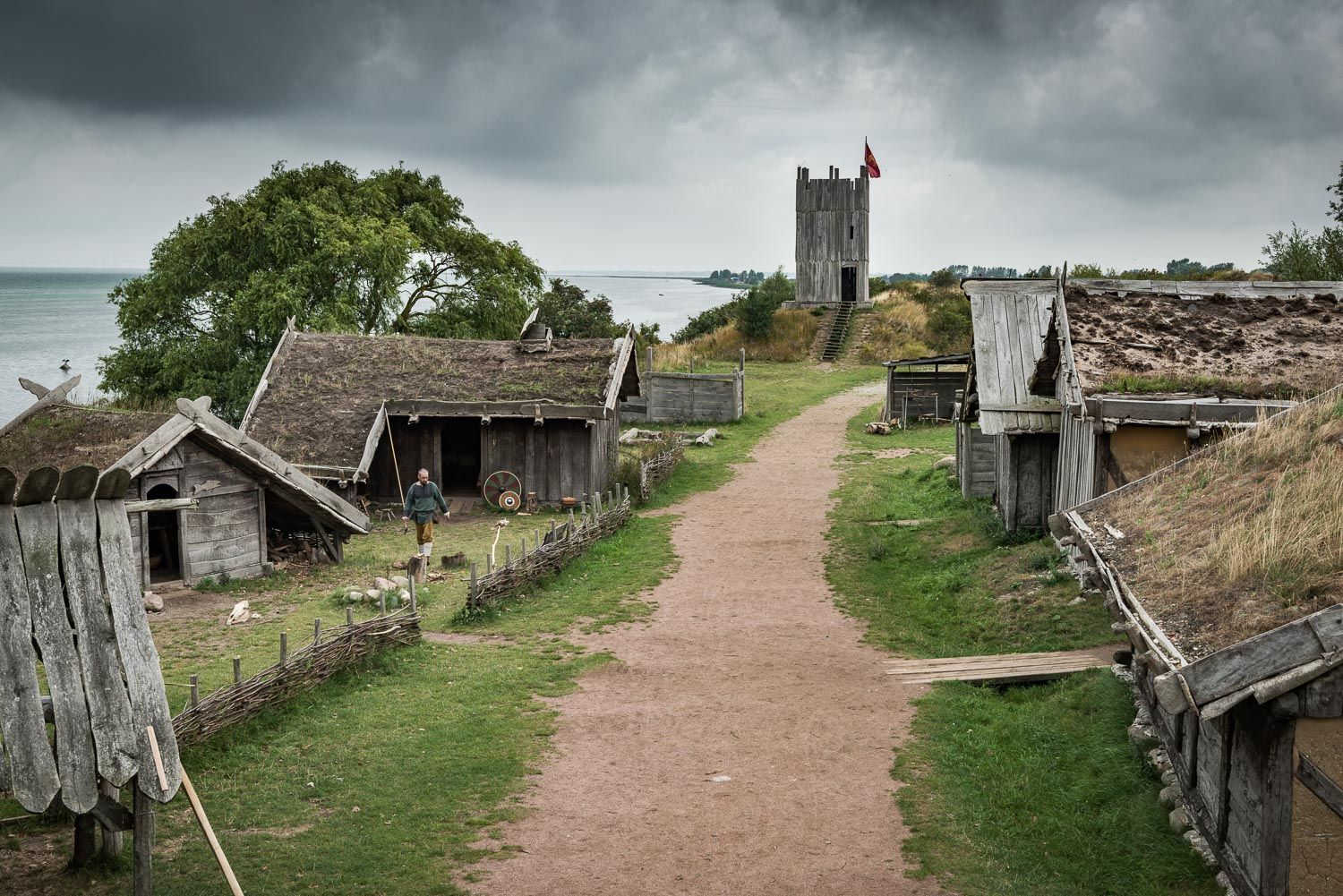 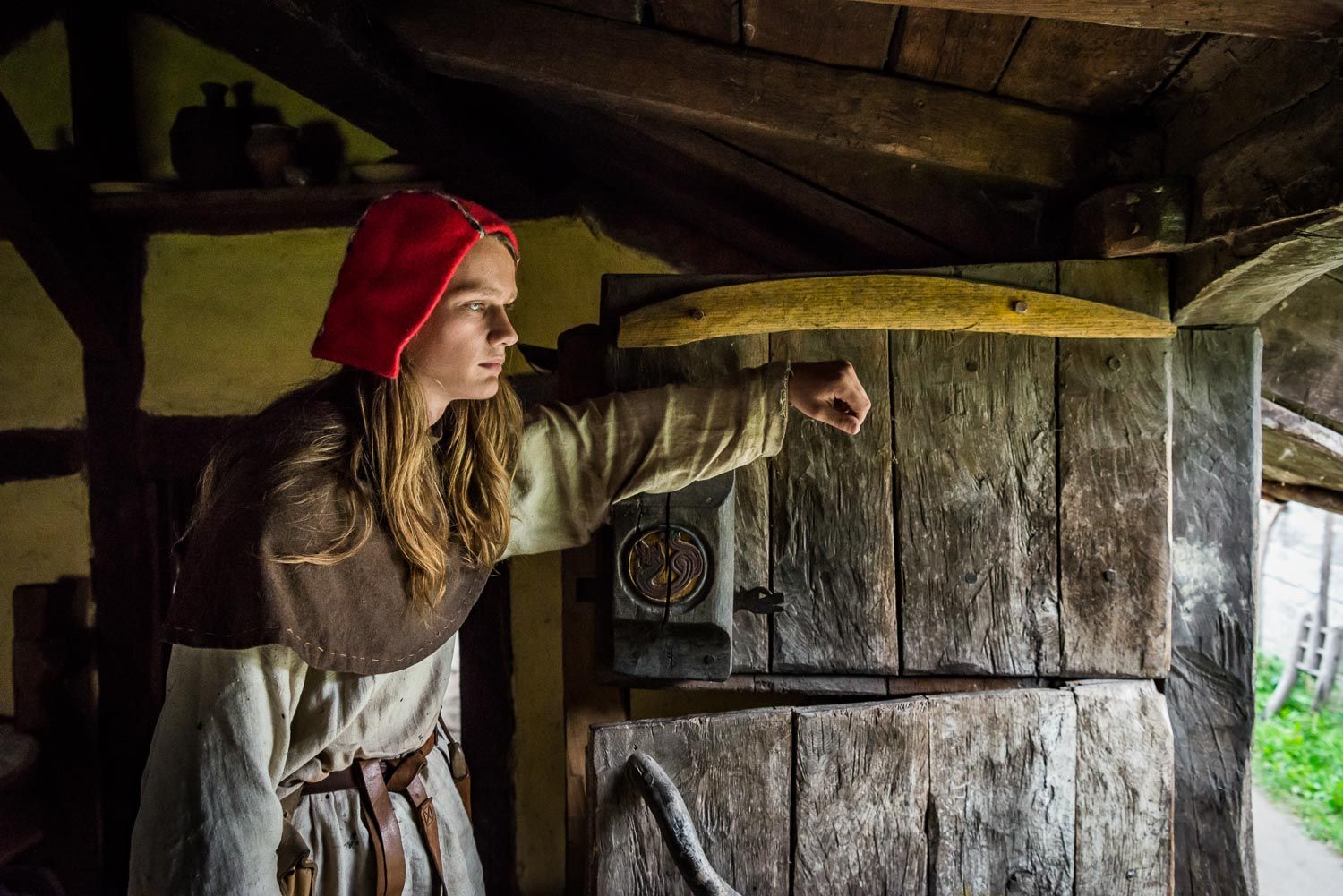 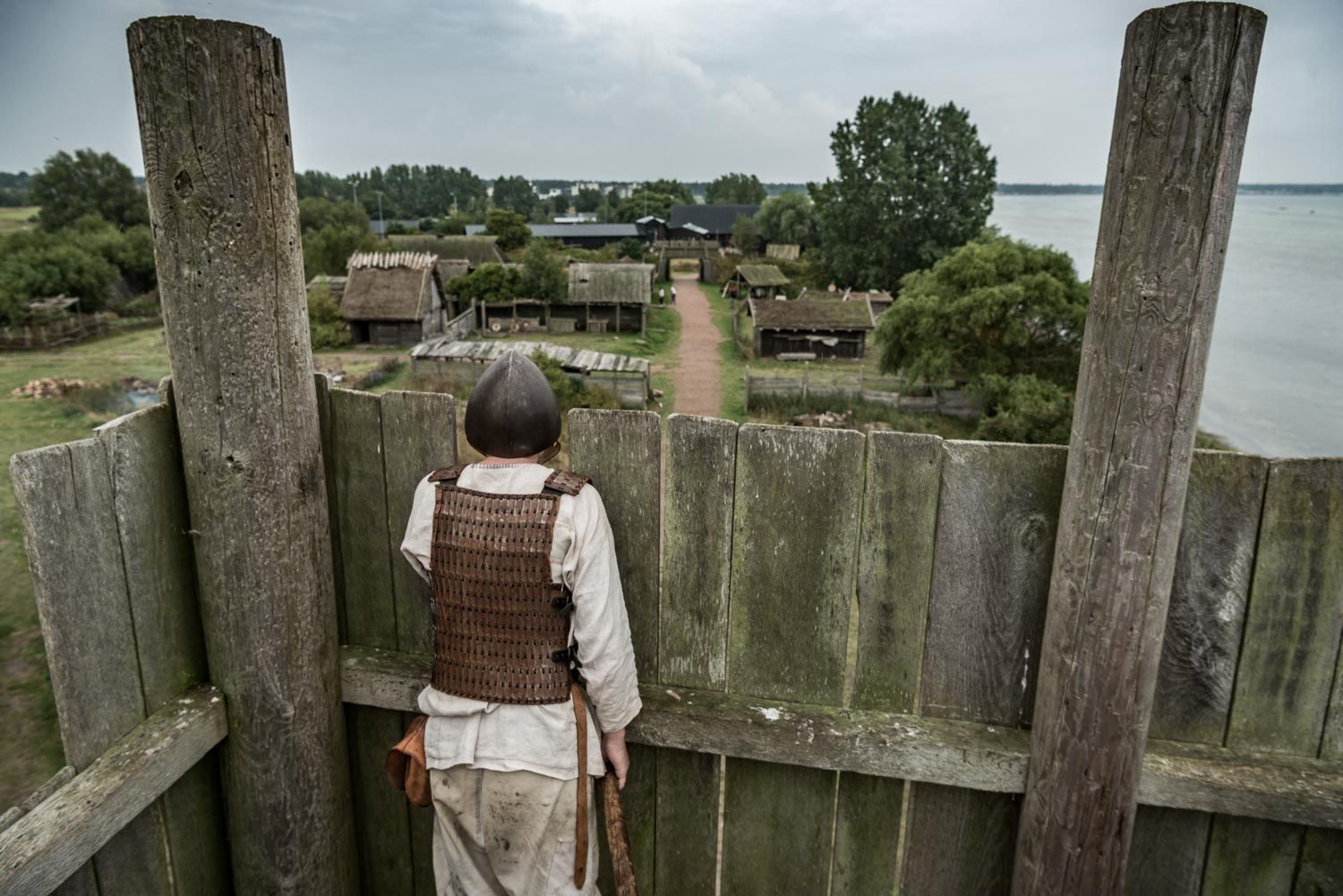 Volunteers come from all over Europe to re-enact this period in history. They do not simply dress like Vikings; during the summer months, when the village is inhabited, they also live as these Norsemen would have once lived. In the ting¸ a kind of meeting hall, hang the coats of arms of various Viking groups which come to Foteviken to travel back a thousand year in time.

Plundering
Oh, those Vikings. There is a huge debate on what the word means. Some say it means pirate or raider, others say it was a certain manoeuvre of the drakkars of the Vikings sailing along the coast. Whatever the word means, fact is there was a lot of raiding. But it might not have been the main reason for the Norseman to go out on the seas in their extremely well-built ships. Sure, the lure of rich spoils was there, but the search for new land might well have been a big factor as well. Because, when the eldest son inherited the estate, the other brothers had no choice but to look for new land.

The term viking also appears in early English literature in the form of the expression ‘to go viking‘, meaning ‘to go plundering’, which, given how much raiding these warriors from the North conducted in the British Isles, is a logical association. The idea that some people hold, however, that the Vikings were undisciplined raiders from a tribe of people that no longer exists, is not true. The Vikings, or Norsemen, were the inhabitants of Scandinavia. Swedish went on raids in Russia, and even gave the country its name; Rus was the name for these Swedish warriors, meaning ‘red-haired’. These fearless men even made it as far as Constantinople, present-day Istanbul. 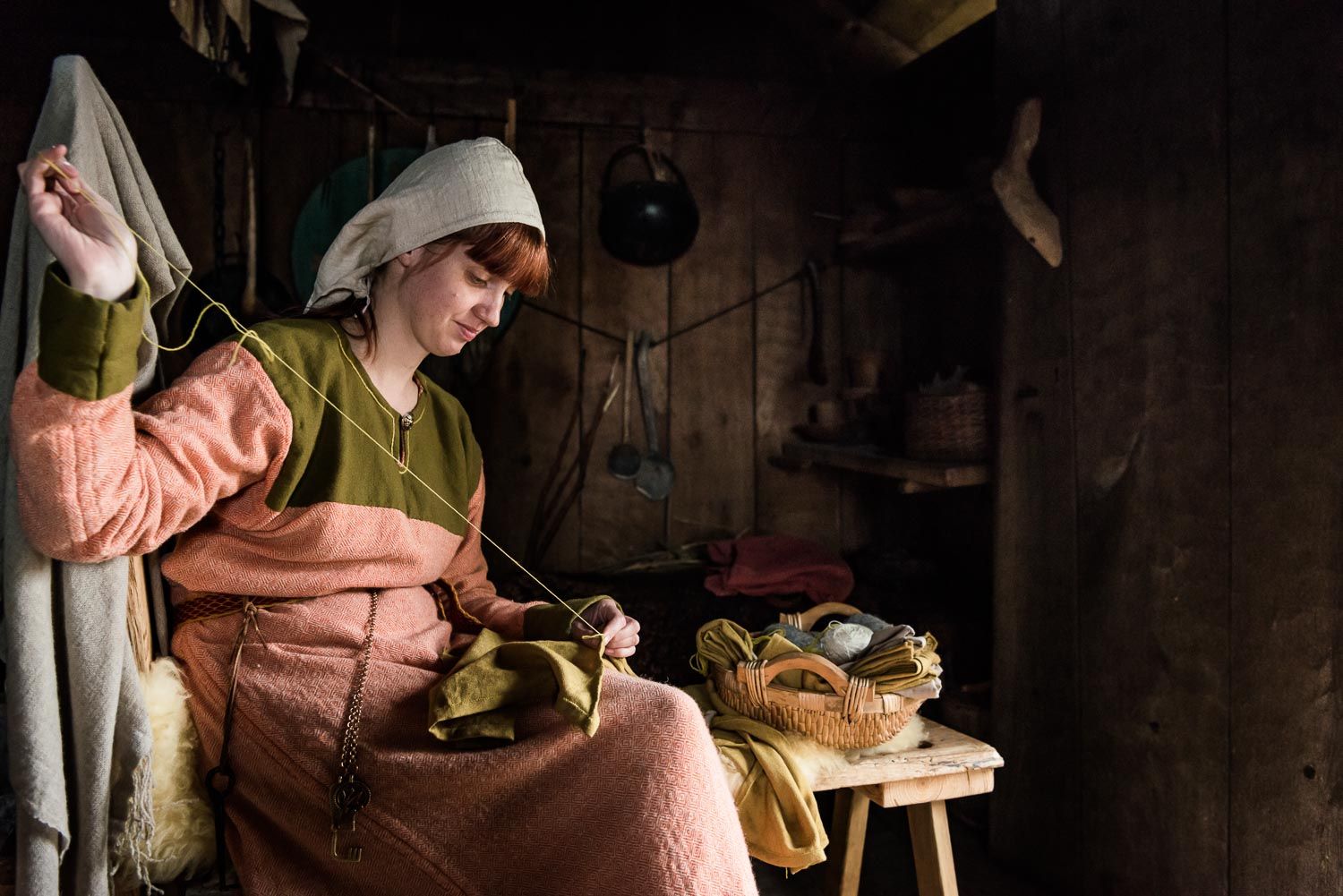 Danes
The Danish Vikings journeyed to the Netherlands, Belgium, the British Isles and France. They established settlements along the French coast of the English Channel from which they launched raids into France itself, even plundering Paris itself several times (including a raid in 845 under Ragnar Lodbrok). The King of the Franks, Charles the Simple, ultimately gave the Viking leader Rollo feudal rights over an area of land at the mouth of the Seine. You might know it better as Normandy, ‘land of the Norsemen’. It was from here that William the Conqueror began his conquest of England in 1066. Norman expeditions even conquered Southern Italy and Sicily in the 11th century, meaning that Danish Vikings had a hand in shaping the political landscape of Europe. And not just the political landscape of the continent, also the genetic landscape. Considering that a large amount of the DNA of all Europeans can be traced back to the Vikings, many people would feel right at home here in Skåne.

Considering that a large amount of the DNA of all Europeans can be traced back to the Vikings, many people would feel right at home here in Skåne

These Danish warriors would have certainly been brave men from Skåne. Danes, you say? Not Swedes? Nope. From around the 8th century BCE until 1658 the southern part of Sweden (the province of Skåne, along with Blekinge and Halland) belonged to Denmark. 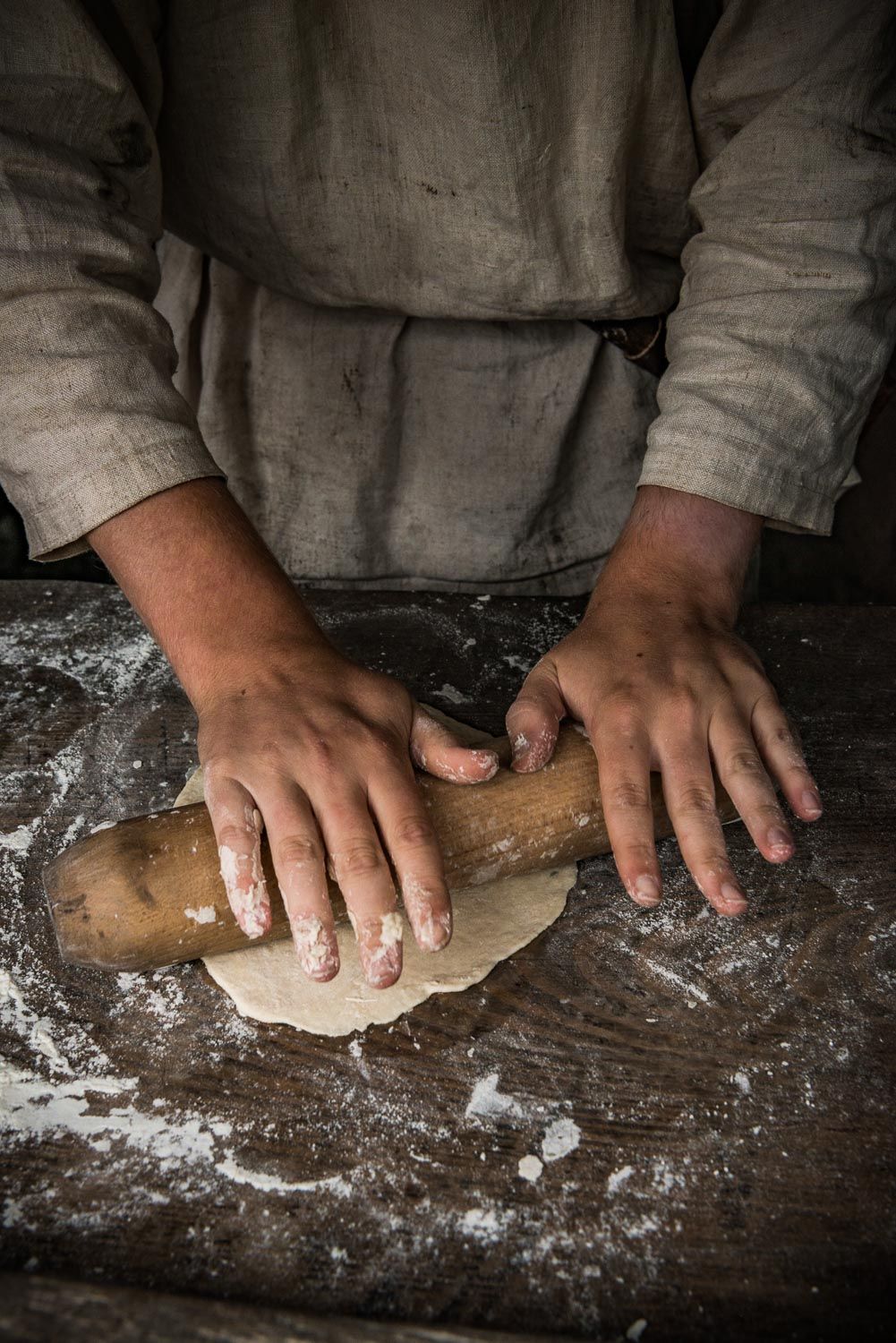 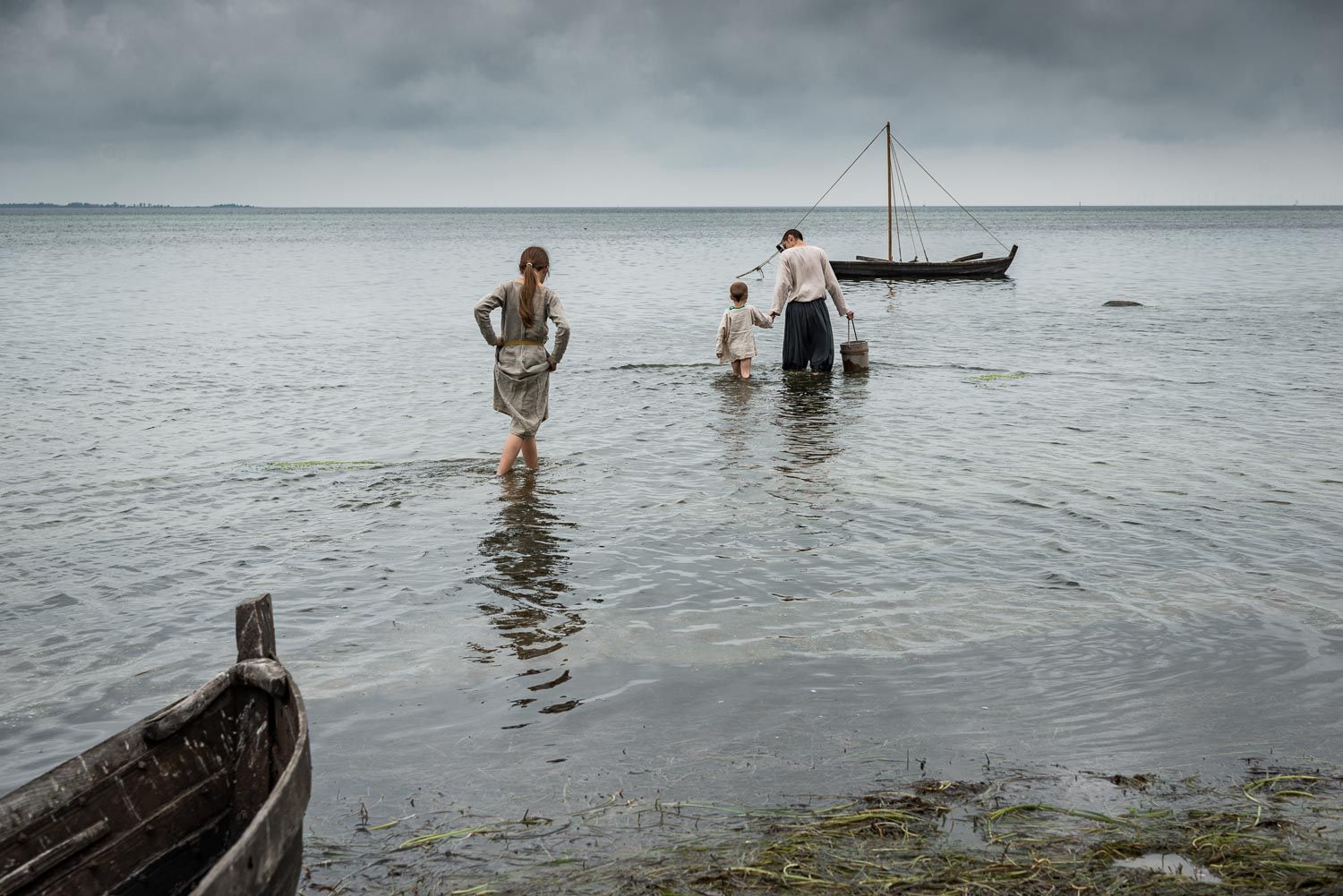 Bluetooth
When the annual market at Halör drew Norsemen from all over the region, the Danish King Harold Bluetooth (ca. 910-986) ruled Skåne. For those of you wondering where the name Bluetooth comes, Harold is the answer. The Swedish company Ericsson, which developed the technology, decided to name it in honour of this ancient Danish king.

For those of you wondering where the name Bluetooth comes, Danish King Harold Bluetooth is the answer

Harold became King of the Danes in 940, uniting many warring bands, and for a brief time also ruled over Norway. In Scandinavia, he is known among other things for spreading Christianity throughout Scandinavia, not necessarily because he was entirely convinced by it as a faith per se, but rather because Christianity made running his kingdom somewhat easier. Christians did believe in one god whose representative on earth was a king after all. Prior to the introduction of Christianity, the Vikings believed in numerous gods, and this proved challenging to control. When everyone is in church on a Sunday, and everyone has to be baptised or buried in a church, it becomes much easier to count how many subjects you have. And therefore, how many soldiers. Taxation is also made easier. Whoever controls the faith controls the people. Another factor was, that the Christians were threatening that they no longer wanted to trade with ‘heathens’. Oh, well. It turns out Harold was a pretty smart guy. 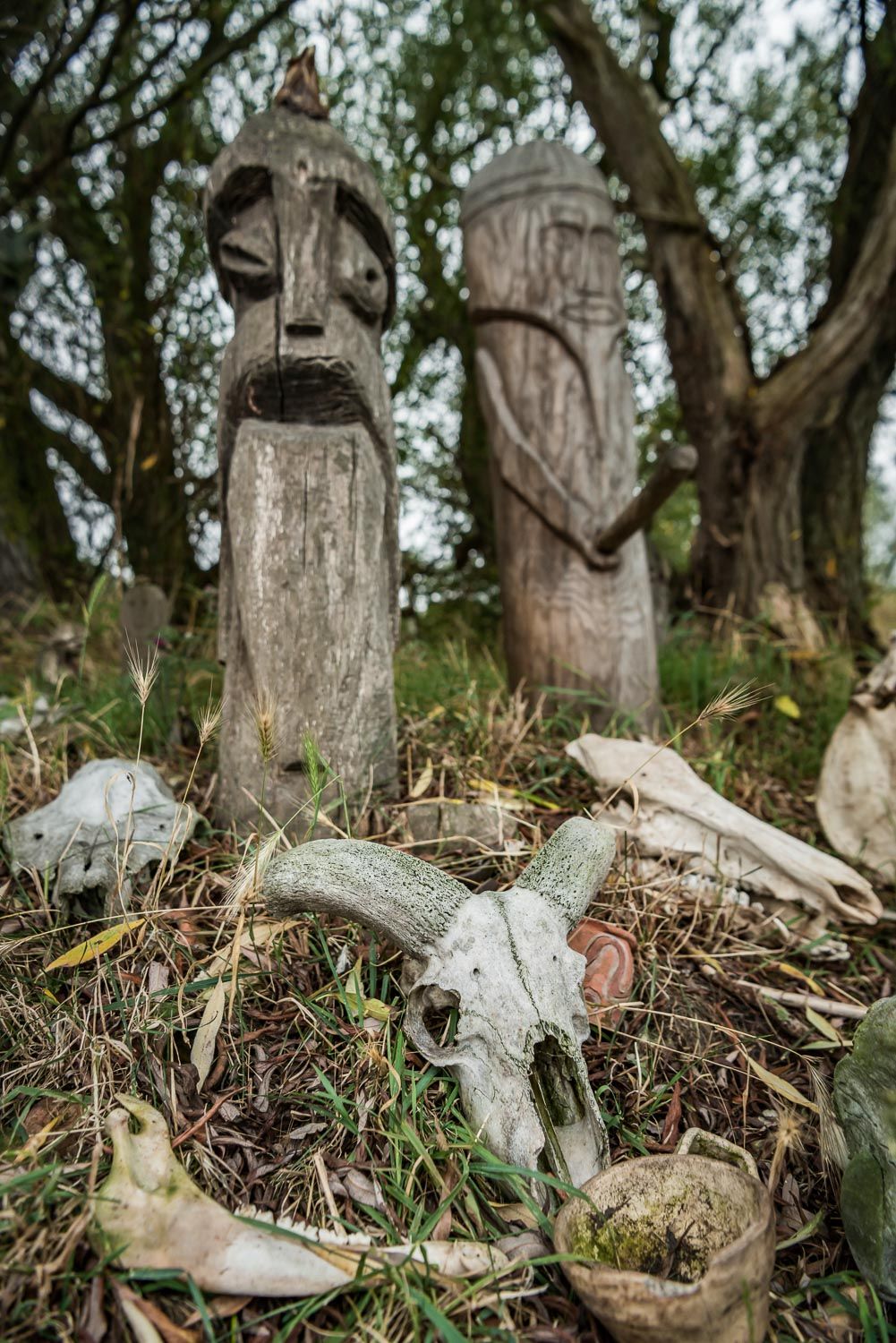 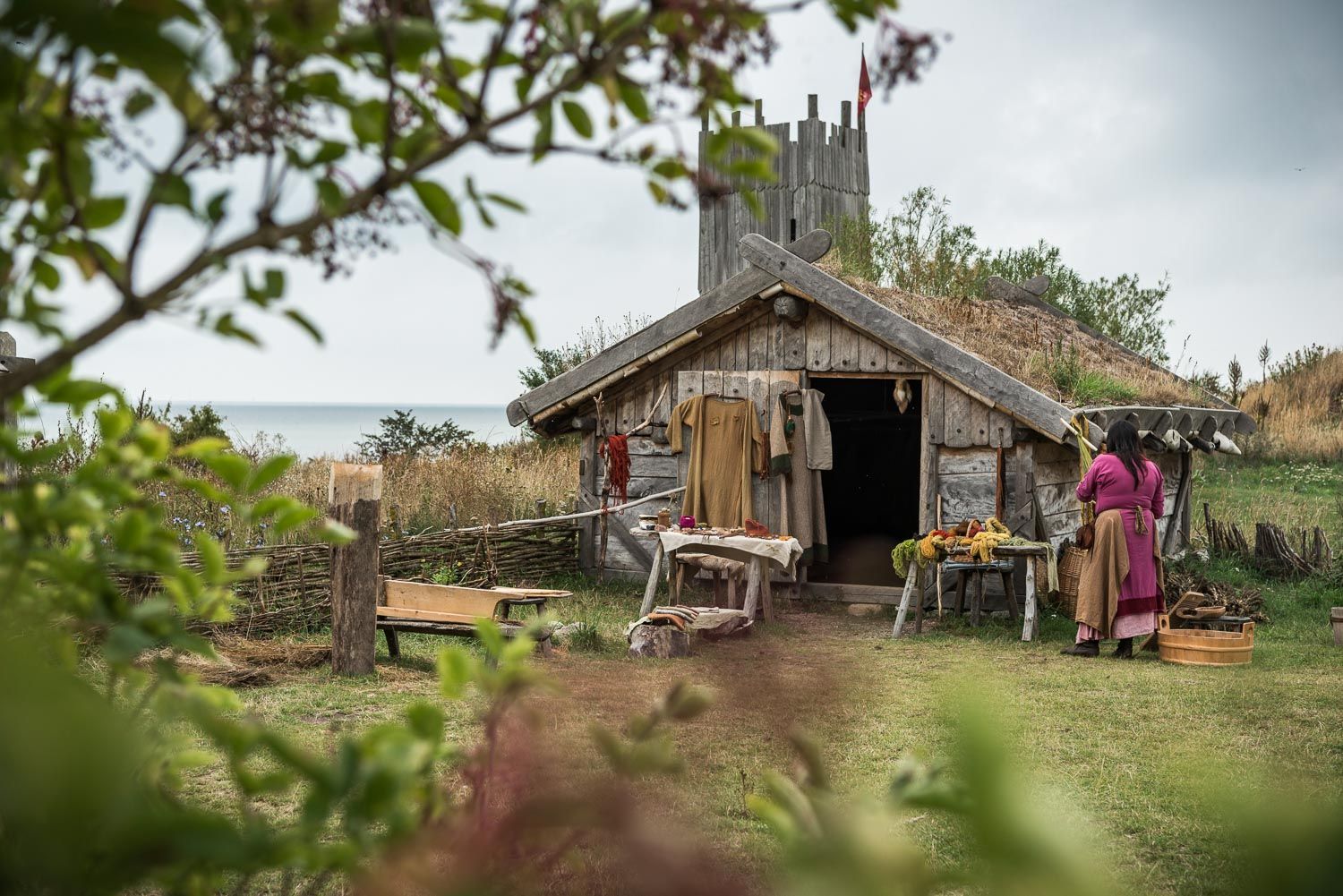 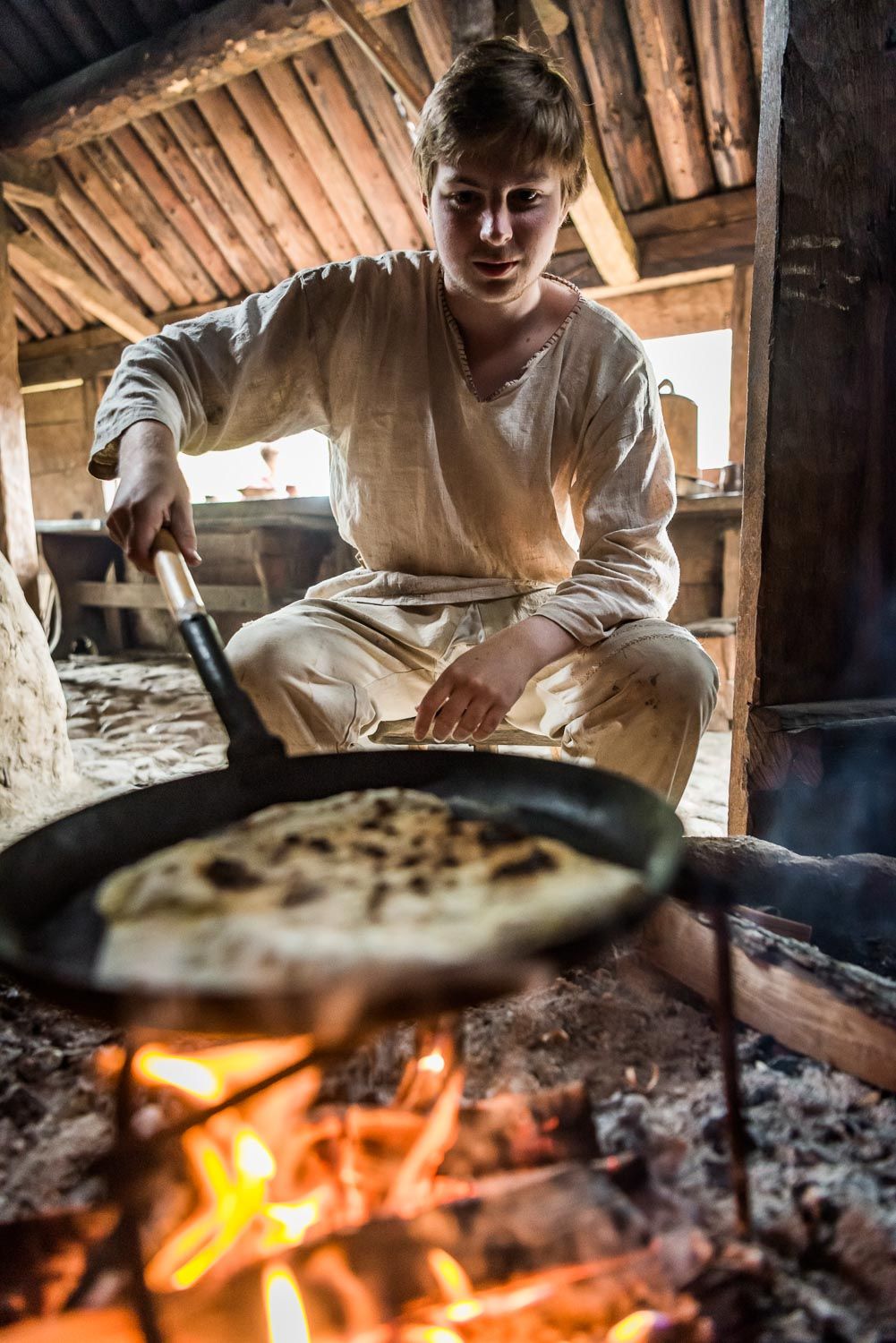 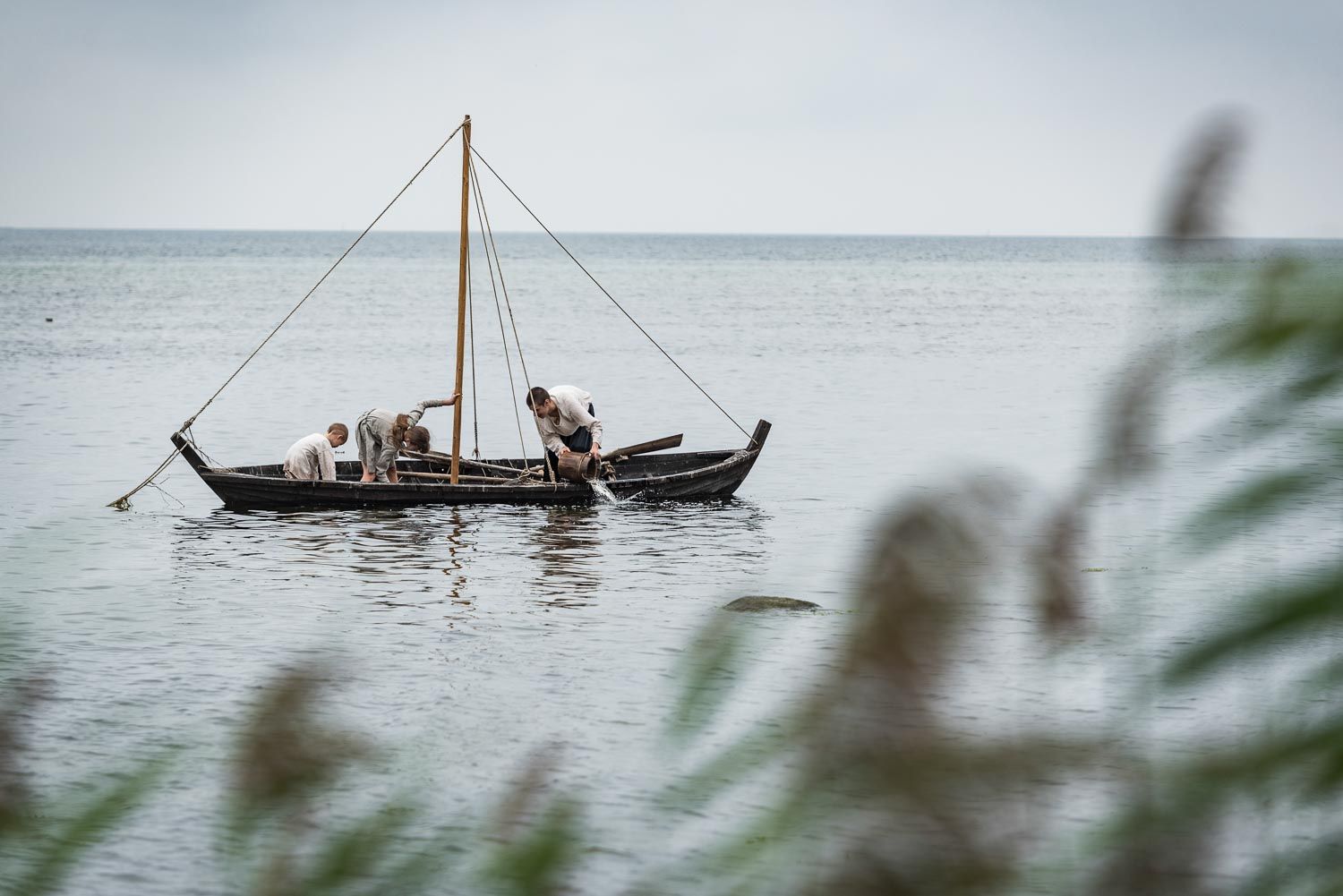 Ringfort
He also built what became known as ring forts, reinforced rounded fortifications that ensured he would maintain his grip on power. A 17km drive along the coast brings you to Trelleborg. Here, in 1988, the remains of one of these ring forts were discovered. Originally built in the second half of the tenth century. It immediately explains the town’s name, as these ring fortresses are constructed from cut logs called treller.

A leatherworker is busy scraping an animal hide in front of his wooden hut. He is greeted by the baker, who is wandering past with arms filled with freshly baked bread. Now and then you see some Viking children running about.
A little further along the blacksmith is stoking a fire higher and higher. Here you can also try a Viking helmet on to see how heavy they were, and no, they did not have horns fixed to the side as some people would have you believe. This idea was conceived by composer Richard Wagner when he wrote his opera Die Walküre in which Vikings appeared. He gave the characters beards, long hair and helmets with horns. This might fit well with the violent image people have of the Vikings, but it is far from based on truth.
Viking life in Foteviken, however, is as faithful to the truth as possible. The re-enactors do all they can to live using old-fashioned ways. It is not always a walk in the park, especially if you have a toothache.

Foteviken Viking village is open to visitors on weekdays from May to September, as well as on weekends during July. Entry costs €11 for adults and €4 for children. Events are organised all year round. Check out the Foteviken website for more information.

At The Trelleborgen Viking museum, you find a reconstructed quarter of the prominent fort, a visitor centre, a Viking farm and a longhouse. There is also a symbolic pond. As a reminder that the sea once came all the way up to the palisade. You can wander around and climb the fort to get a good feel for how the Vikings built fortifications. The visitors’ centre tells about the Viking ring forts and the kingdom of Harold the Bluetooth. In summer, the visitors’ centre and the Viking farm, where you can experience Viking life and crafts, is open every day. The outdoor environment is open all year round, and there are events throughout the year. At the annual market, you can also get married – Viking style!

Discover your inner Viking in

If you can’t get enough of the Viking era, Skåne is a goldmine. Here are some other places you should not miss: