Hip and historical, but proud of its rough edges
Newcastle

Newcastle, actually half of NewcastleGateshead, is bustling on the banks of the Tyne, but not only there. The city, with its characteristic differences in height, embraces new developments and is sometimes called the “hipster capital of the north-east”.

Isn’t it just a little bit sad? You have been an inspired politician, committed to peace, reform and civil rights all your life. You become prime minister of your country, and lo and behold: under your rule, slavery is abolished. And then, years later, what do people think of when they hear your name? A cup of tea!

This is the fate of Northumbrian Charles Earl Grey (1764-1845), who indeed happened to be fond of a cup of tea in between his political activities. But not the tea they gave in the north of England, because the water there was way too chalky. A Chinese businessman who heard of the earl’s problem gave him tea that contained a little bergamot oil. Charles thought it tasted wonderful, even with chalky water, and the tea was named after him: Earl Grey. Since the earl never applied for a patent on the product, anyone is allowed to make it. That’s why, every time he appears on television, the current Earl Grey complains about all the income that his family has missed over the years. The family, incidentally, is known to be extraordinarily wealthy. And to be fair: the patent would have belonged to that Chinese trader, wouldn’t it? 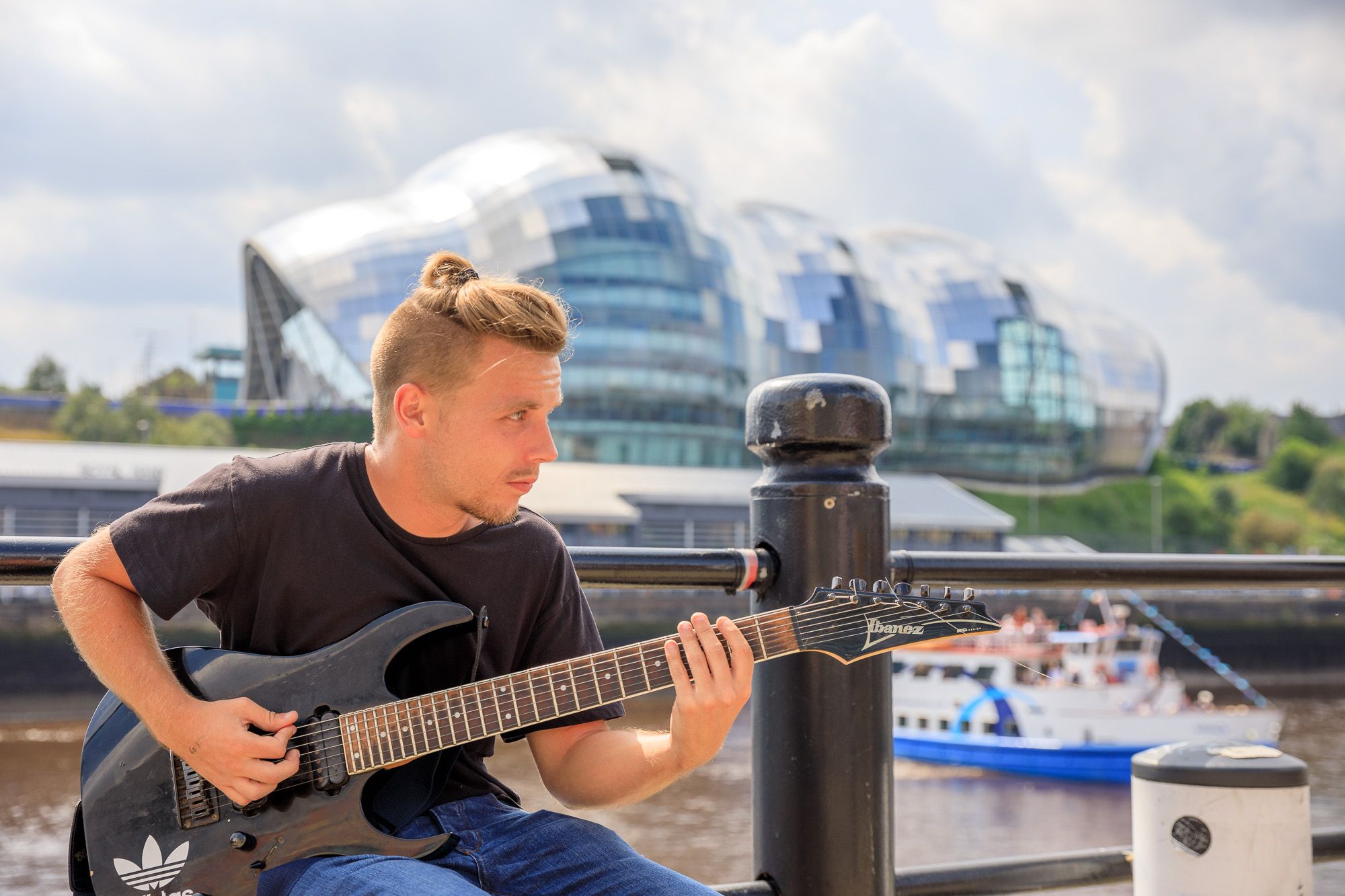 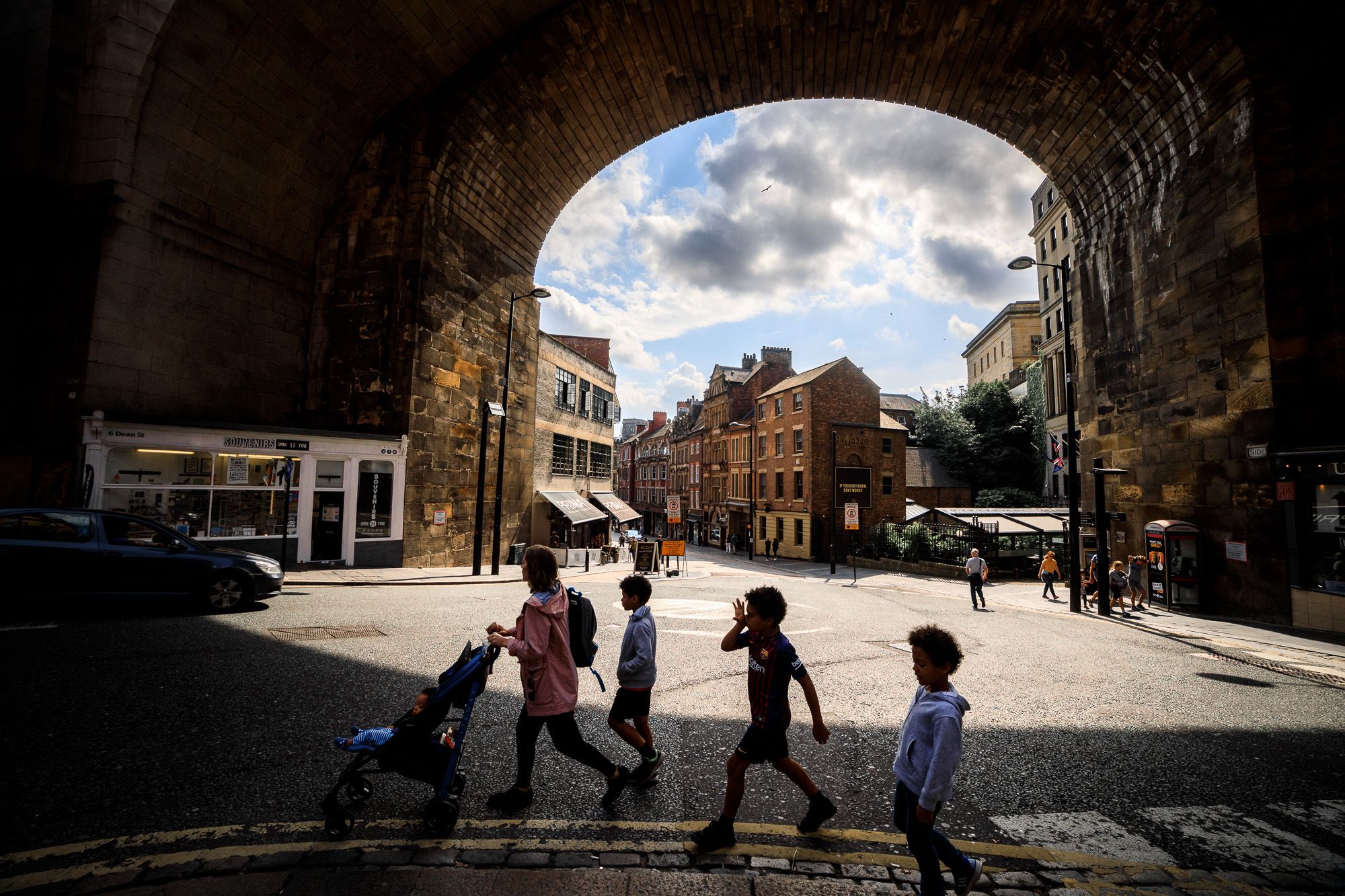 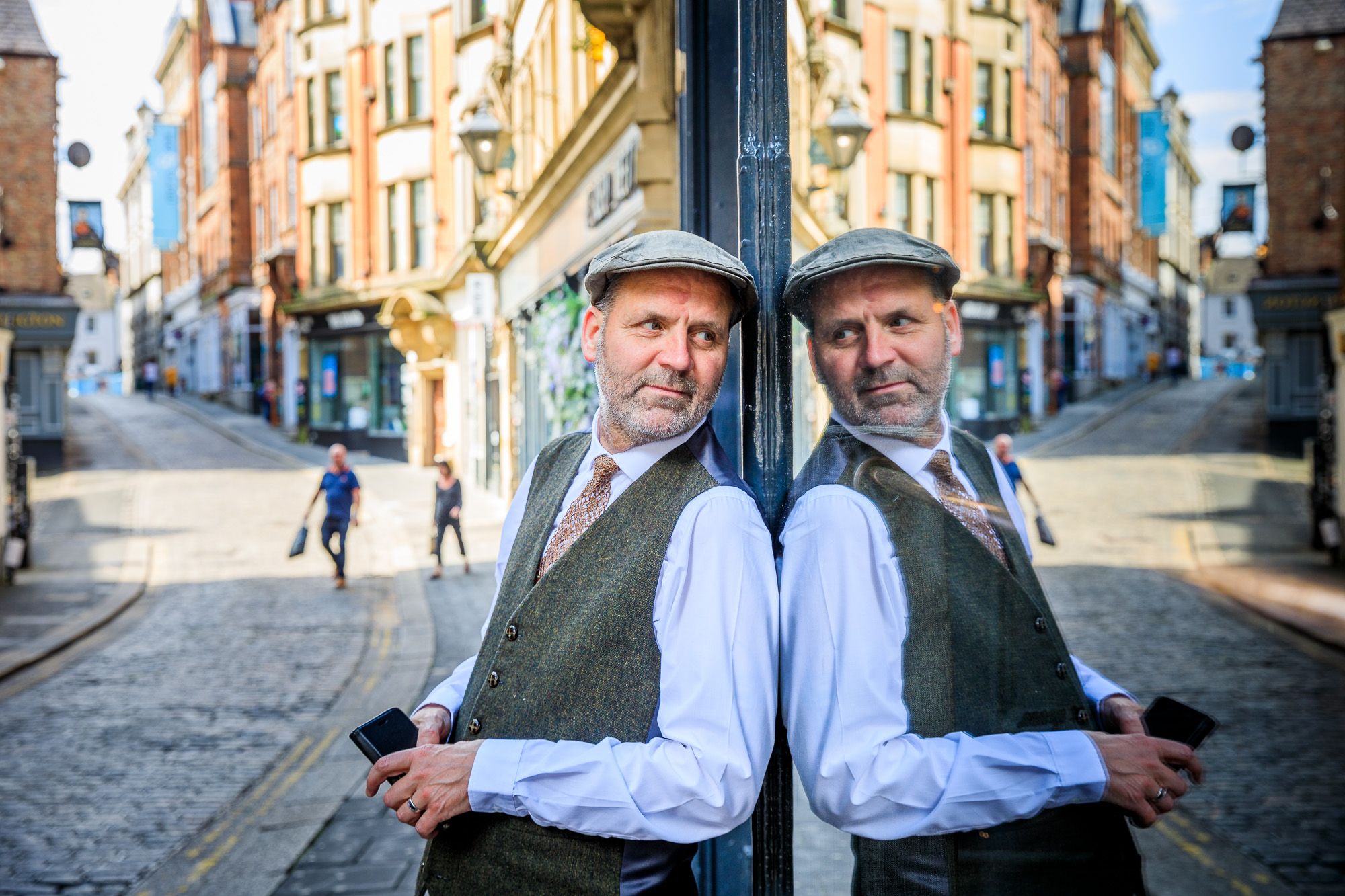 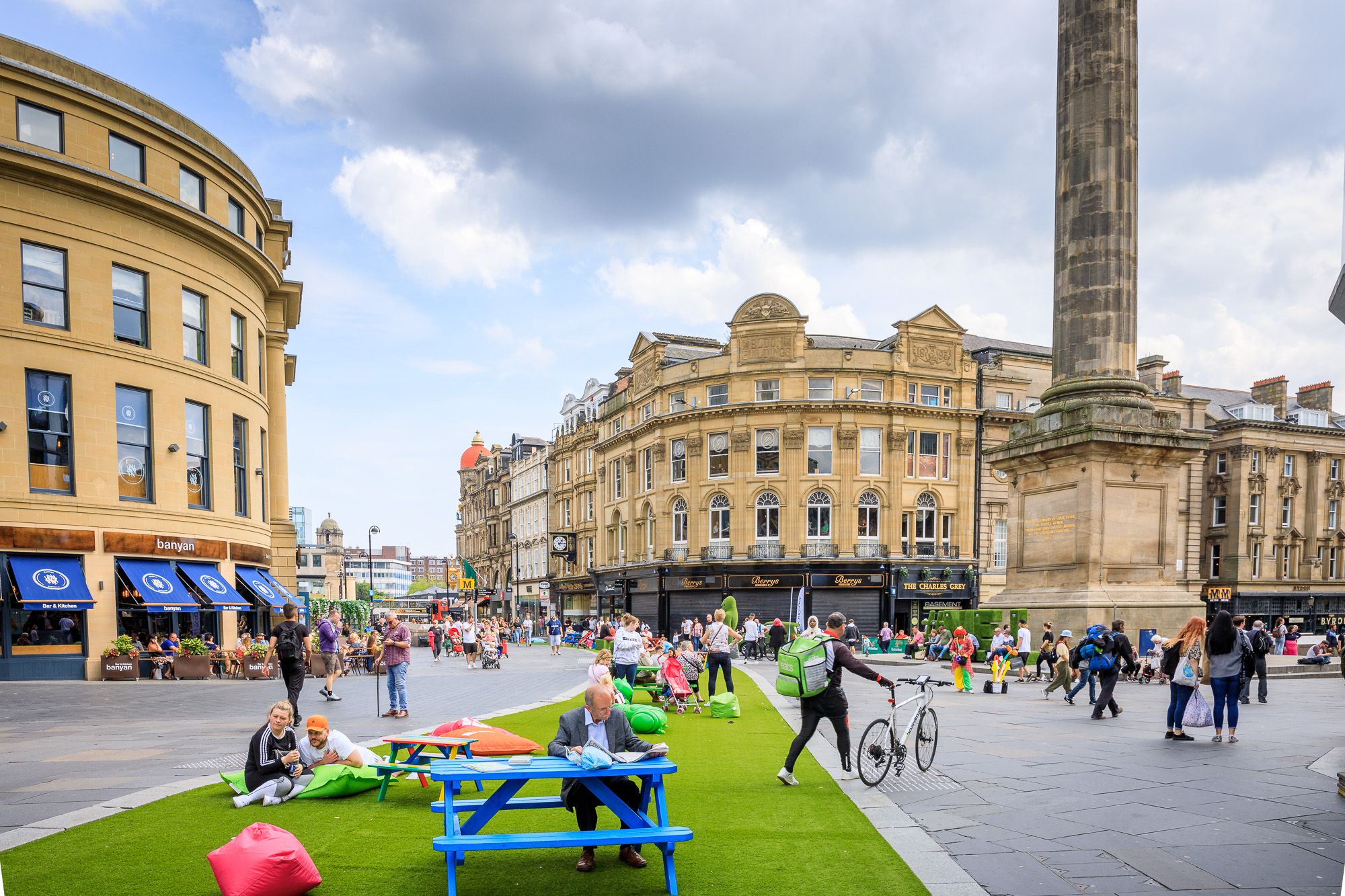 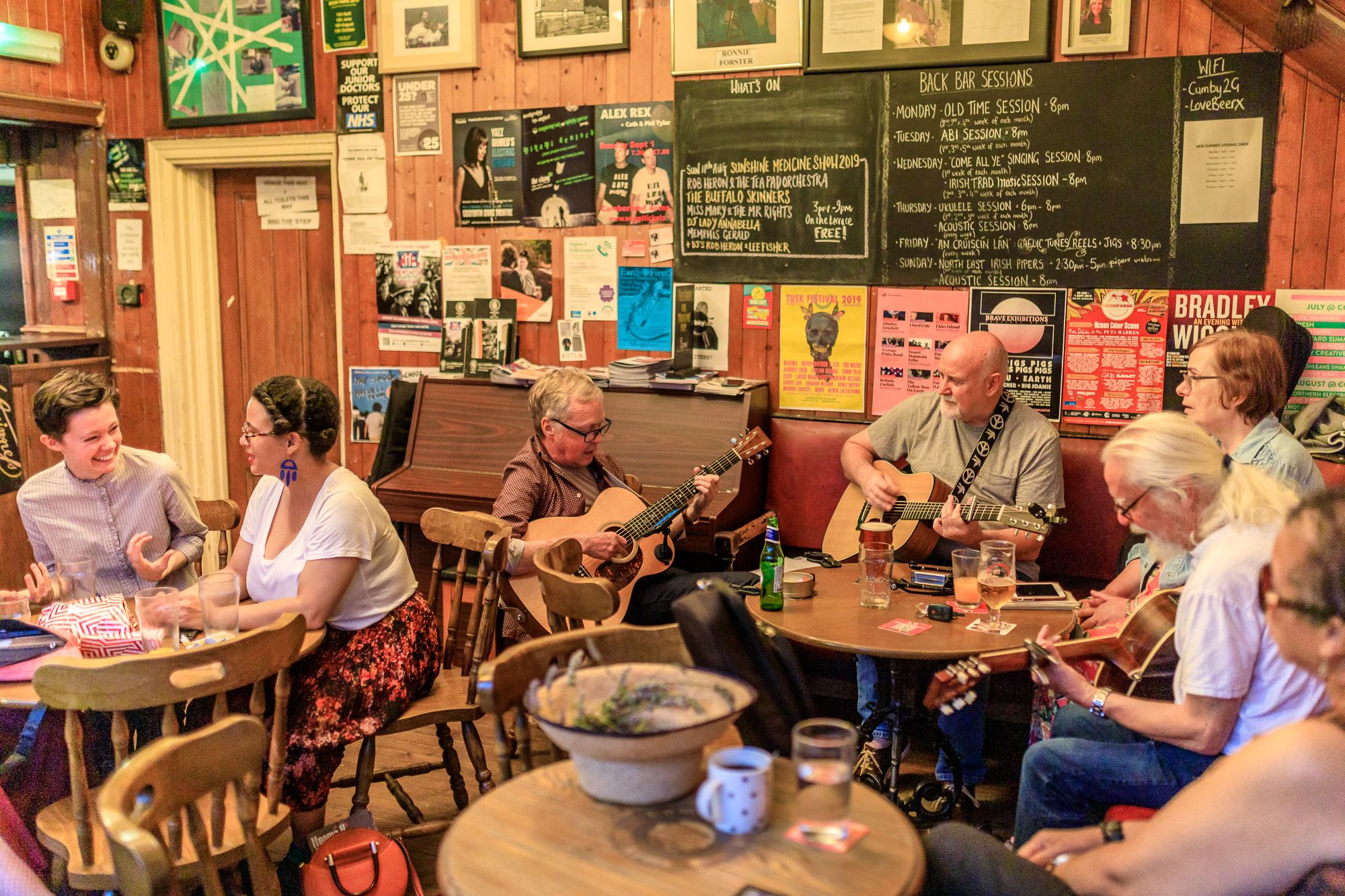 We are in the heart of Newcastle, at the top of the gracefully curved and descending Grey Street, next to a giant column with the statue of Earl Grey on it. The municipality has covered some of the streets here with artificial grass, creating a pleasant pedestrian area. In principle, this is a temporary affair, but if it turns out successful, it might be permanent in the future.

It is one of the ways in which Newcastle is actively trying to make itself more attractive, a process which started years ago and – as any visitor will confirm – has been distinctly successful.

But don’t take it from a visitor. Take it from Carl, a cheerful, tweed-clad local store owner: “Newcastle has the most beautiful architecture, the most beautiful nature in its immediate surroundings and the friendliest inhabitants of the whole of Northern England.” Of course, every righteous Geordie – as the people of Newcastle and the surrounding area are called – would say that. They always have. But in the past most of them knew deep down that this was, well, big talk really. What could be said about a city that, throughout the world, was mostly associated with coal grit and factory chimneys and whose local football club was last English champion in 1927?

But Newcastle-on-Tyne, as its full name goes, has gone beyond its past. Gloriously. It has strengthened ties with sister city Gateshead on the other side of the river and is now, on the authority of Lonely Planet, “the hipster capital of the northeast”. 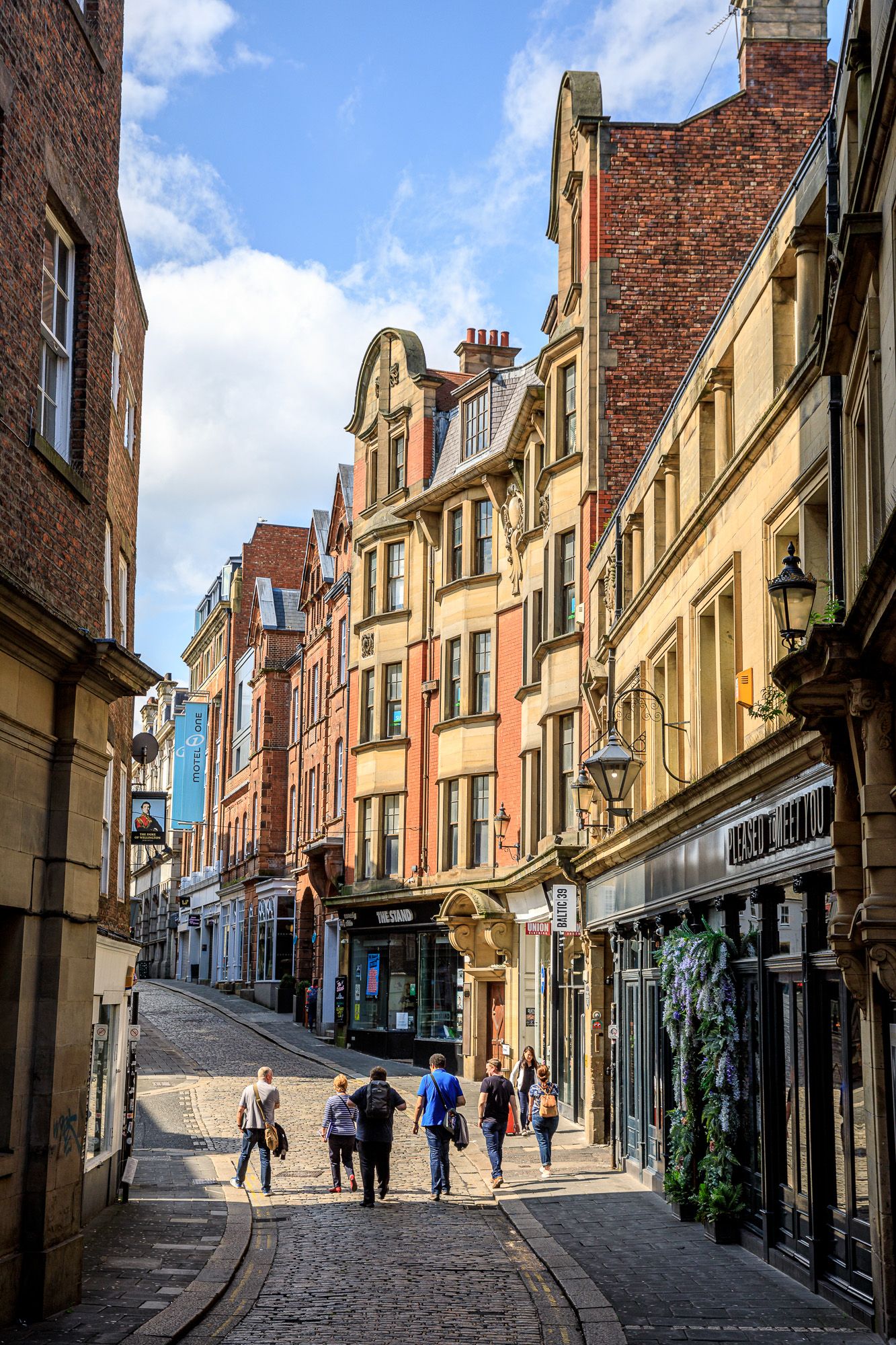 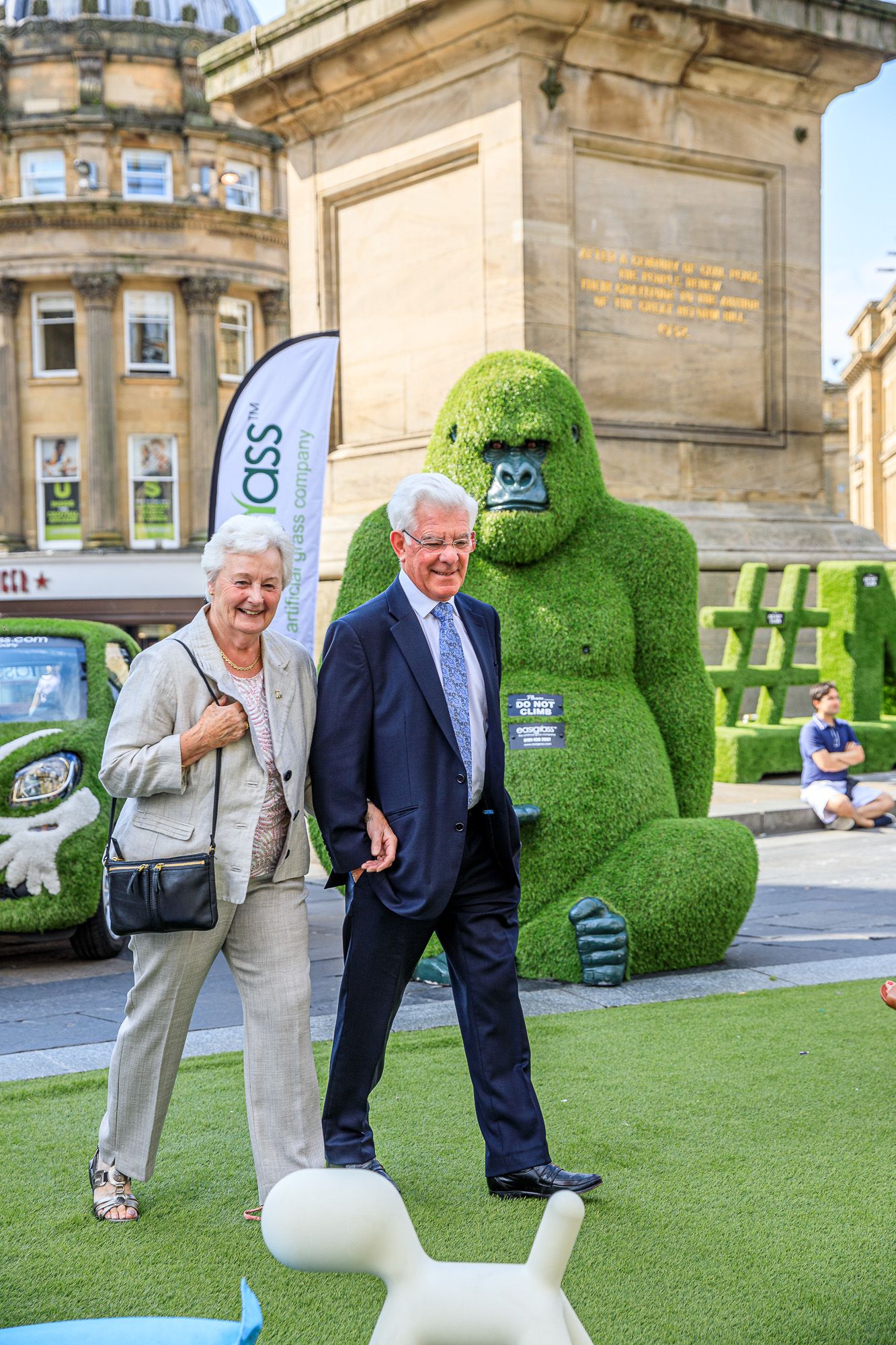 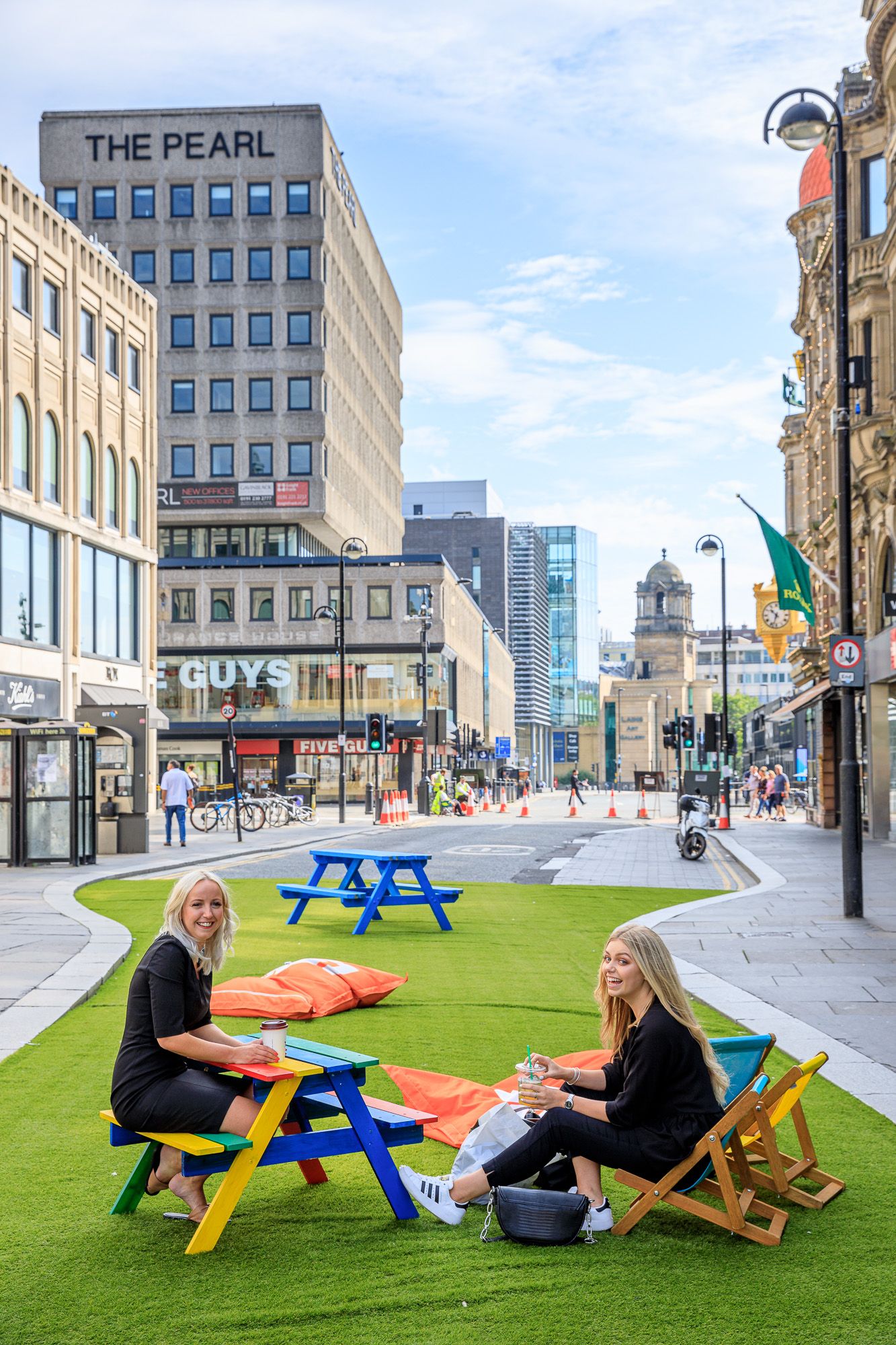 Sister cities
Newcastle, as suggested above, is actually half of a double city. That becomes clear when we walk down through Grey Street and Dean Street towards the river. The “other half” is on the south side of the Tyne: Gateshead. The two sister cities once turned their back at one another, and of course the inhabitants still make jokes about “the other side”, but today the cities like to present themselves as a unit: NewcastleGateshead.

There’s a lively atmosphere at the river banks: there are food stalls, shop stands and street performers everywhere. Two of the most famous buildings of the double city loom up on the other side, both spectacularly situated on the south bank. The first is the ultramodern The Sage Gateshead, which looks a bit like a giant snail of glass and metal. When we enter, we see this glass and metal is a kind of skin for three buildings-in-one: concert halls where all genres of music are being performed. 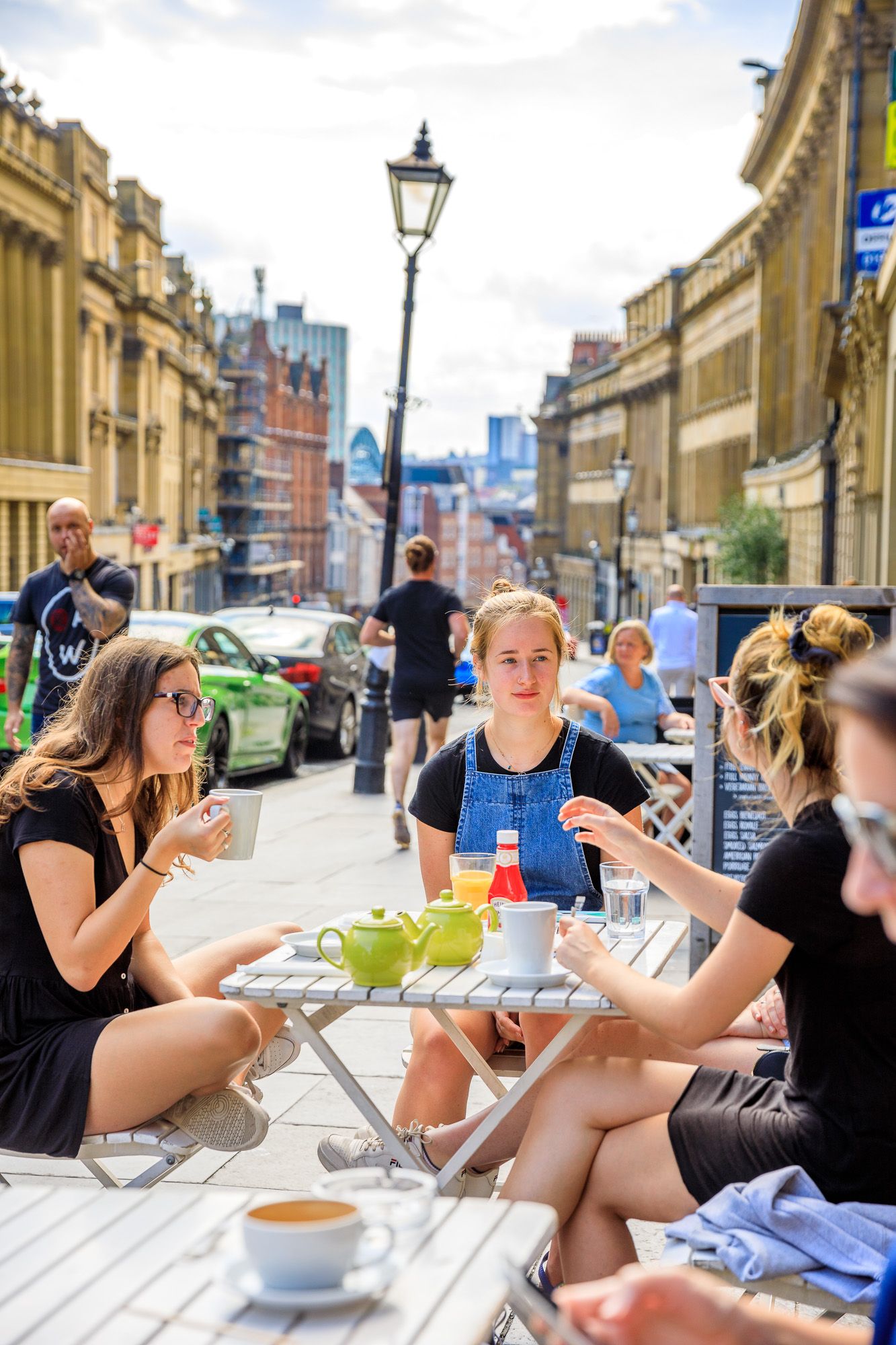 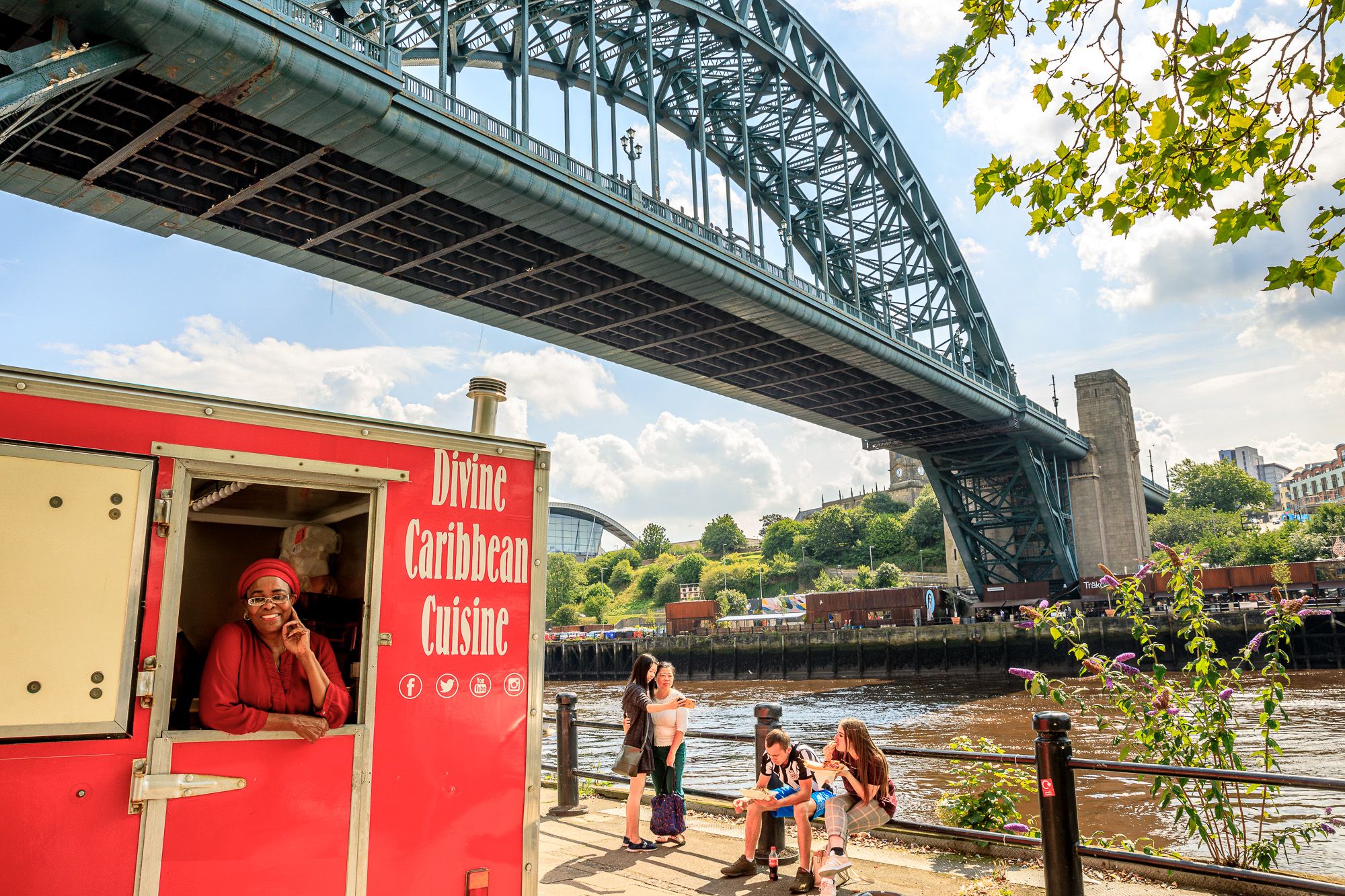 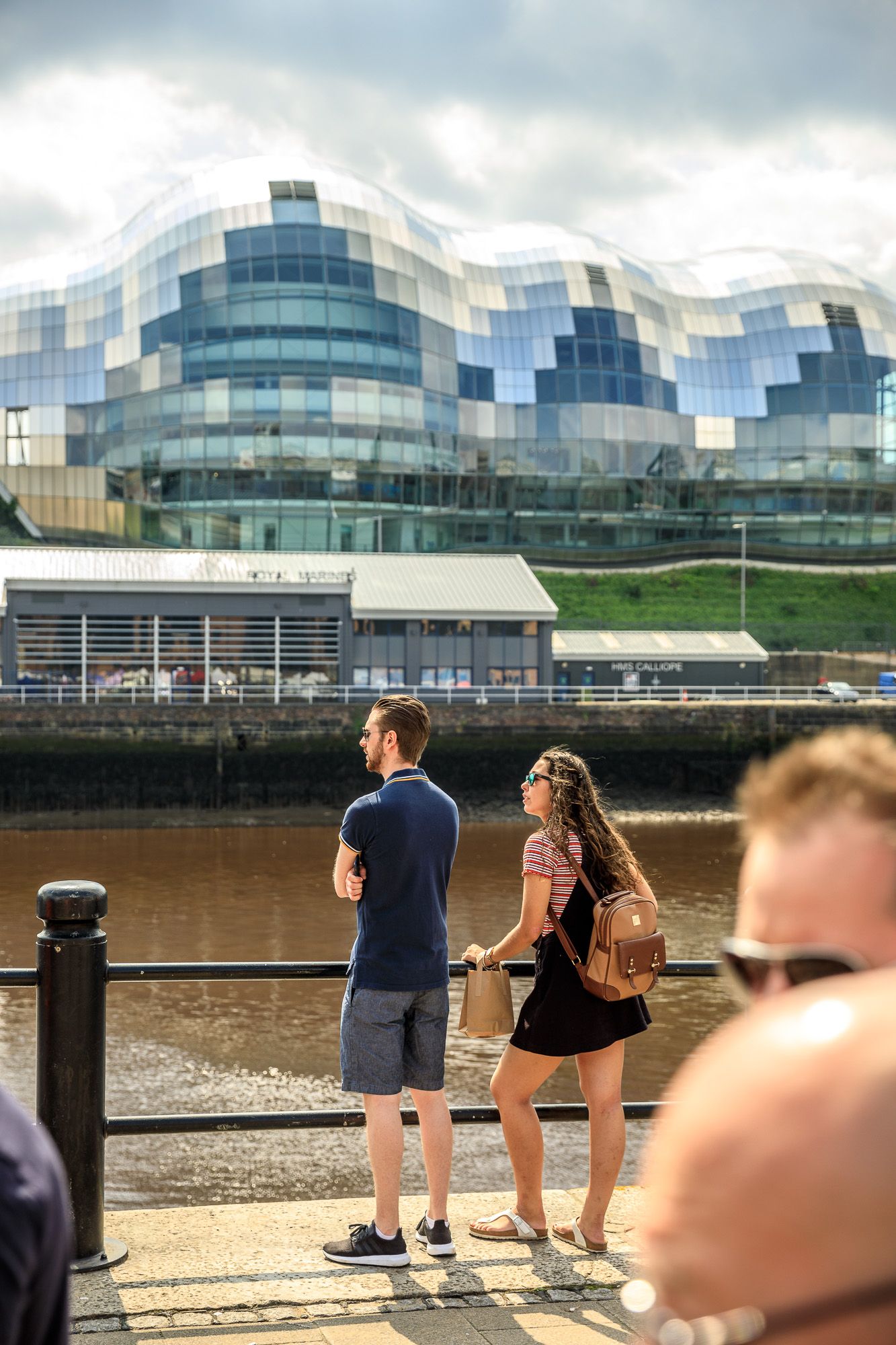 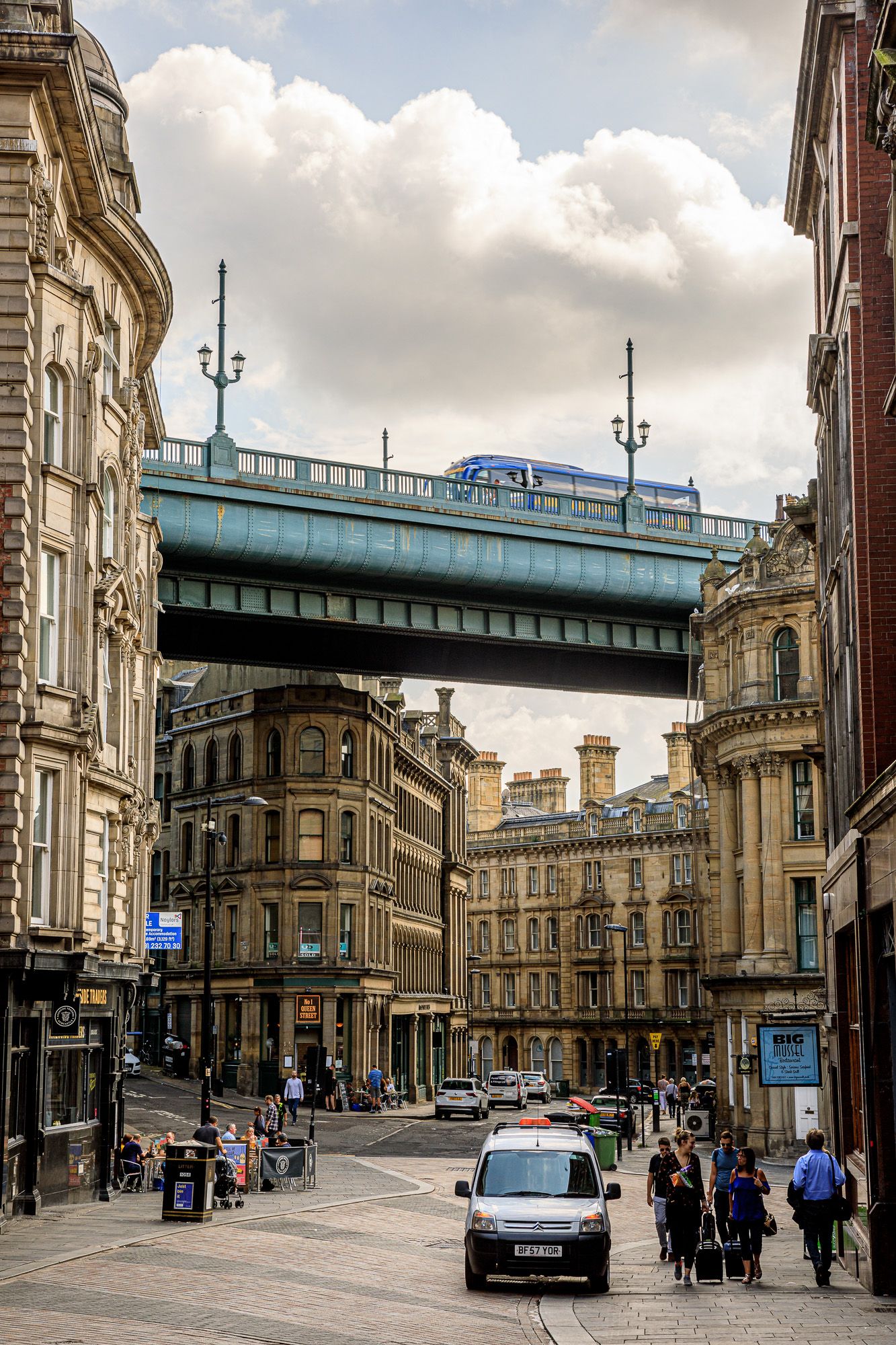 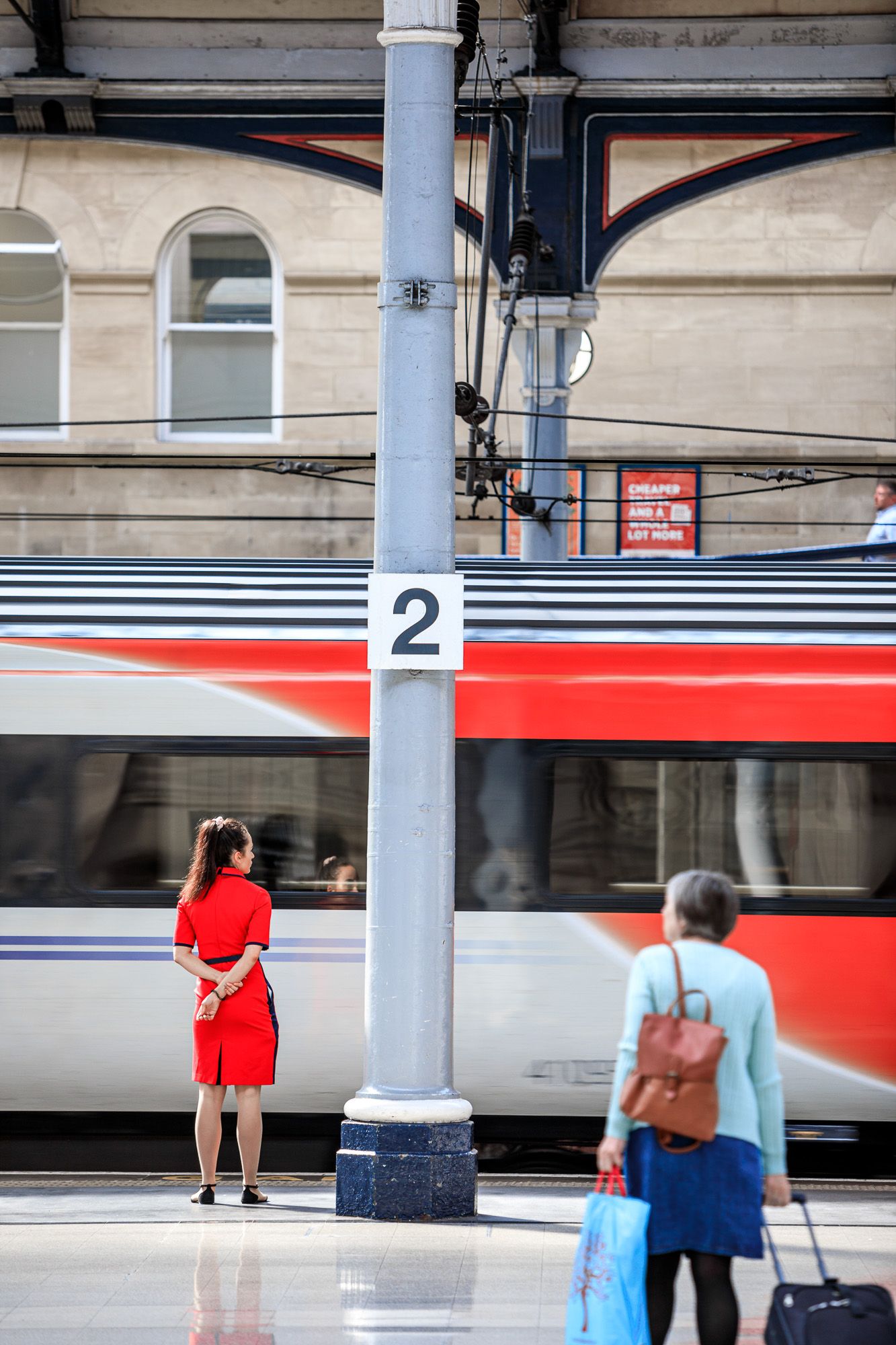 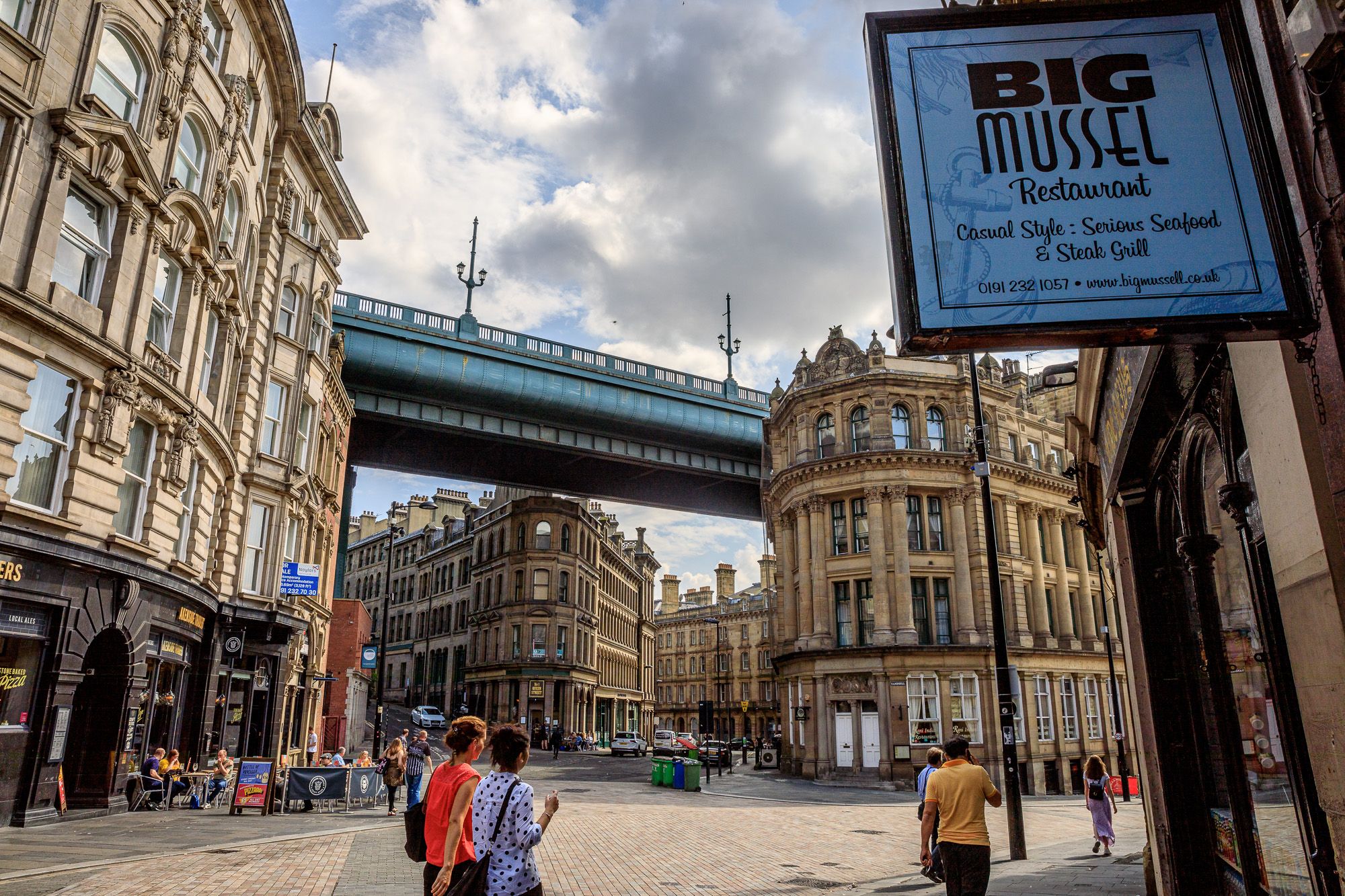 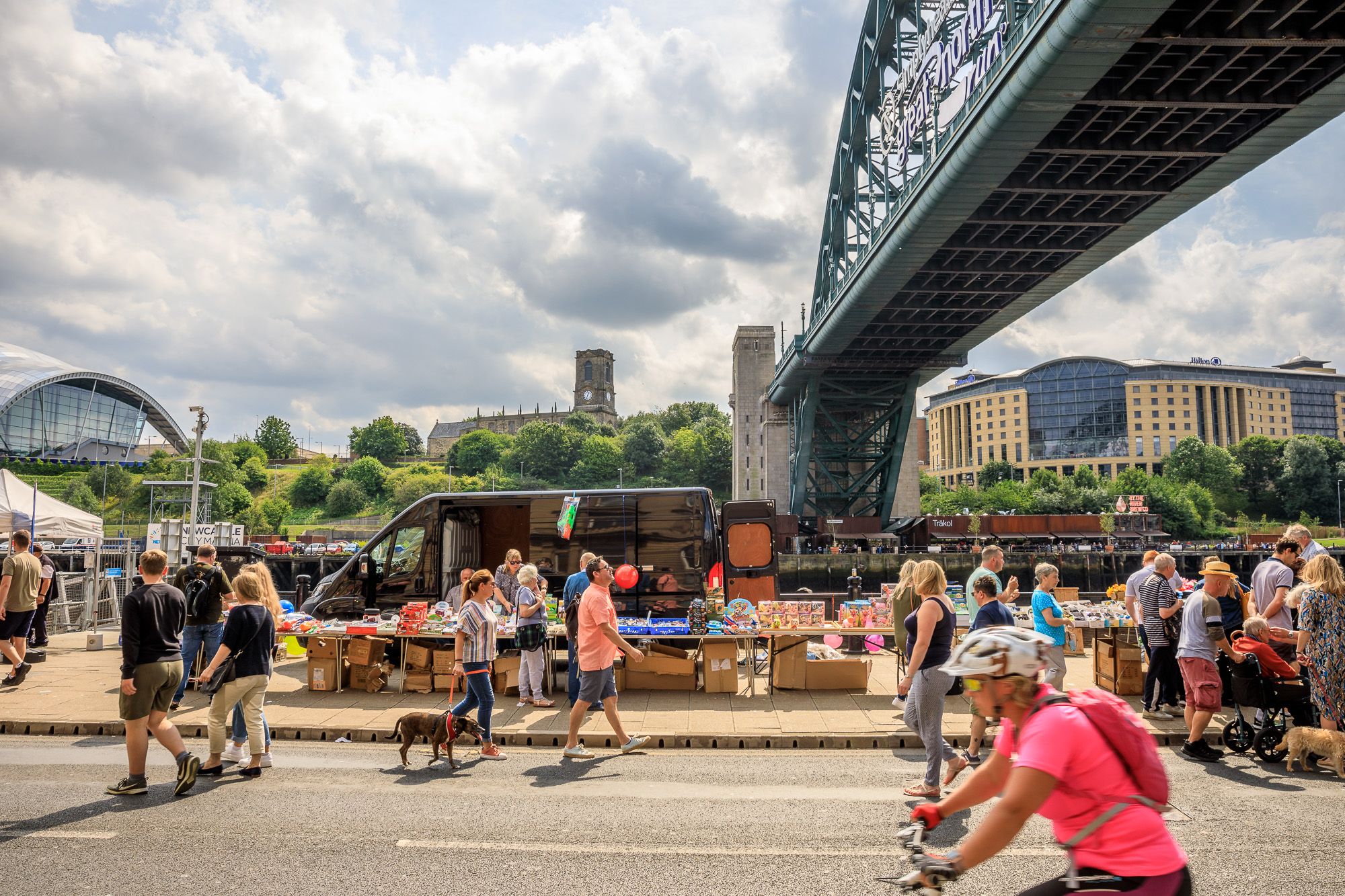 A little further one finds BALTIC: a gigantic museum of contemporary art, located in a former flour factory. After having enjoyed the works of art, you can indulge in octopus carpaccio, grilled asparagus and handmade linguine here, in the rooftop restaurant Six: each a work of art in its own.

Because it looks as though the opening bridge is giving a wink, it is called the Blinking Eye Bridge

From Six you have a magnificent view of both sister cities, which are held together by seven bridges, of which the Millennium Bridge is the most spectacular. It consists of two arches: one horizontal and one vertical. Pedestrians and cyclists can cross the horizontal arch, while the vertical serves as a counterweight. The structure can tilt 40 degrees, uplifting the horizontal part 25 meters: a very spectacular way to open a bridge. Because it looks as though the opening bridge is giving a wink, it is sometimes called the Blinking Eye Bridge. It is a fine example of construction technology which fills the Geordies with pride. So let’s keep quiet about the fact that the bridge was designed by Dutch Royal Volker Wessels Stevin, shall we?

Why Geordies?
By the way, when you ask Geordies why they are called Geordies, you get very different answers. One says it is because this part of England was on the side of Protestant King George I, when the Catholic pretender threatened his position to the throne James Stuart. But others claim that the industrial past of the city is the reason. A ‘geordie’ was a miner’s lamp, and many Newcastle and Gateshead residents worked in the mines. Right in the heart of the Victorian Grainger Town district are the Central Arcade and Grainger Market. The Central Arcade is a classic covered shopping street, stylish and especially suitable for shopaholics with a platinum card. The atmosphere in the Grainger Market is entirely different. It is also covered, but a lot more informal. Once only vegetables and meat were sold here in the past, but today the range is much more varied, and you can also buy electronics and jewellery. Grainger Market is also the home of a number of great independent cafes.

A new place called Stack is a fitting nod to the industrial past of the city: a shopping and entertainment centre whose shops, restaurants and bars are located in around 30 sea containers. And then finally there is the castle that gives the city its name. William the Conqueror sent his son Robert Curthose north to defend his kingdom against the Scots. He had a “new castle” built that was expanded and rebuilt over the years. From the main tower, one has a beautiful view of the city: hip and historical, but proud of its rough edges. 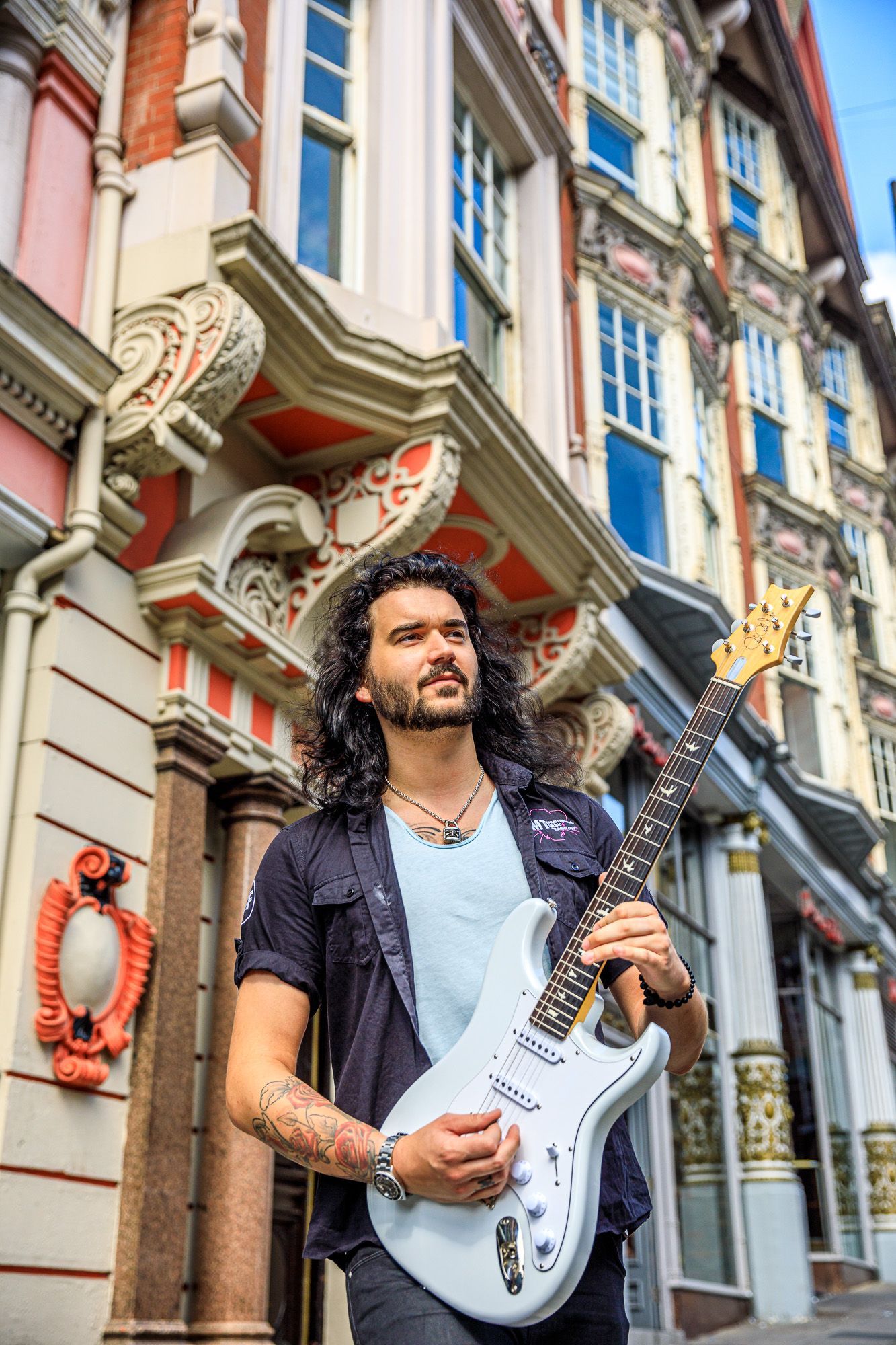 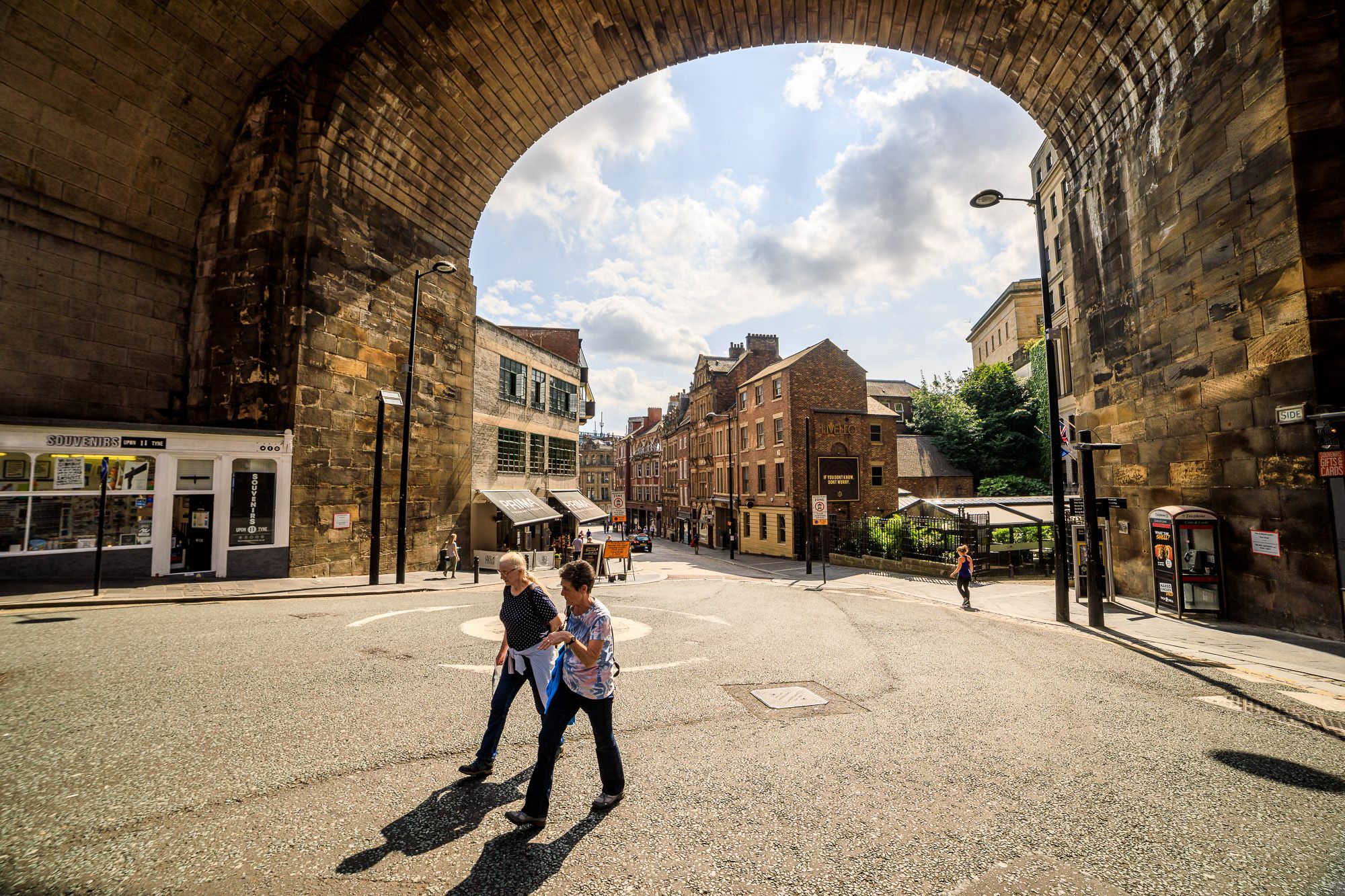 ——————–
Angel of the North: sculpture by Sir Anthony Gormley located just outside the city

——————–
Great North Museum: including a replica of Hadrian’s Wall and the skeleton of a Tyrannosaurus Rex 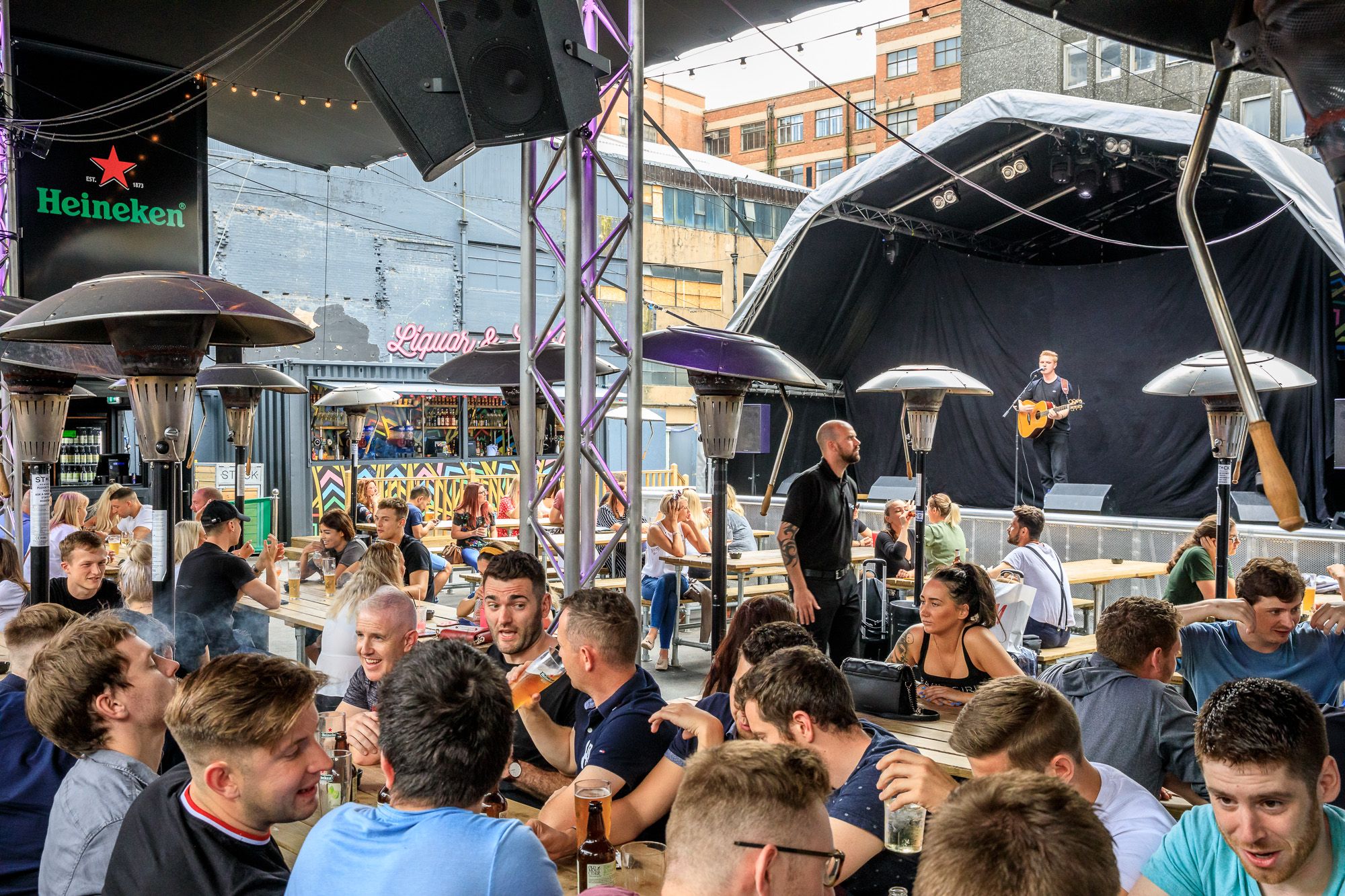 The Botanist, Monument Mall. The cocktails are famous here, and we indeed saw some spectacular drinks passing by. In addition to the Sunday roast, The Botanist is especially proud of its signature dish: hanging kebabs. To discover what they are, just order them. You will not be disappointed.