Paddling and forest-bathing in
Skåne, Sweden

There’s no WiFi in the forest, but Felicia Eckersten provides a much better connection. A connection with yourself. We have the world she grew up in to thank for it: a primaeval forest in the middle of Skåne with a meandering river running through it. Here’s how to walk out of the woods completely relaxed after a forest bath in nature with Felicia.

“Save the planet” is Felicia’s shocked reaction to a plastic bag floating in her river. She paddles ashore. The ducks are nervous; what is this lady with her hat doing in our river? “Sorry guys.” She slides her paddle under the sandwich bag and lifts it on board. She carries on her journey as if she is the new Greta Thunberg. She is not alone. Felicia leads a fleet of women in canoes who have all signed up for two days of mindfulness in the forest. I am one of them. The only two men who signed up for this adventure are filmmaker Josiah and photographer Frits. Forest bathing is mostly a women’s event, led by primordial woman Felicia.

Hi, I’m Felicia
Felicia is everything which makes Sweden Swedish. She’s tall, blonde, pretty, and she loves nature. A friluftsliv-girl who happily takes everyone into her forest to experience life as it should be: with both feet on the ground, breathing from your stomach, and staring like a child, full of wonder. 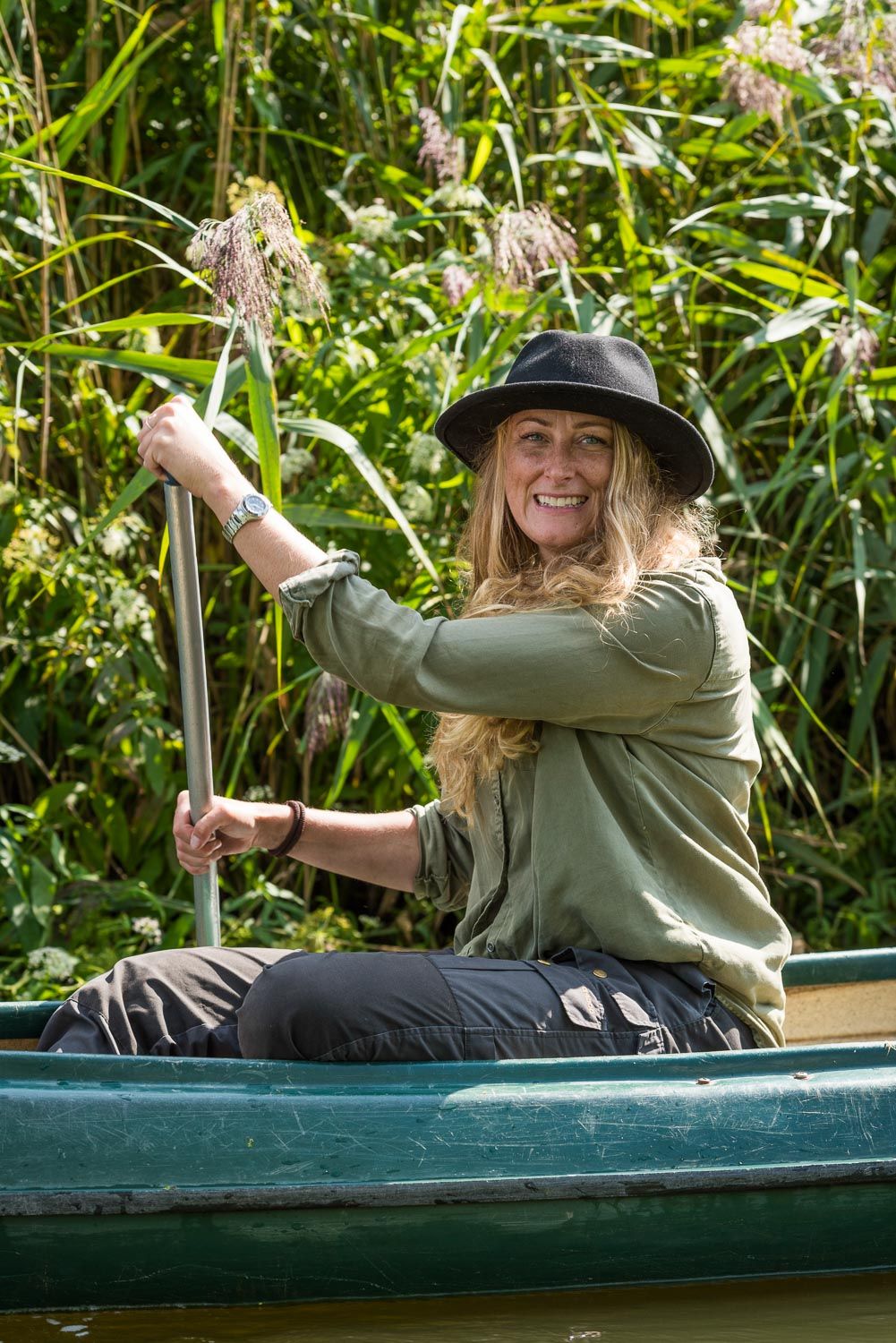 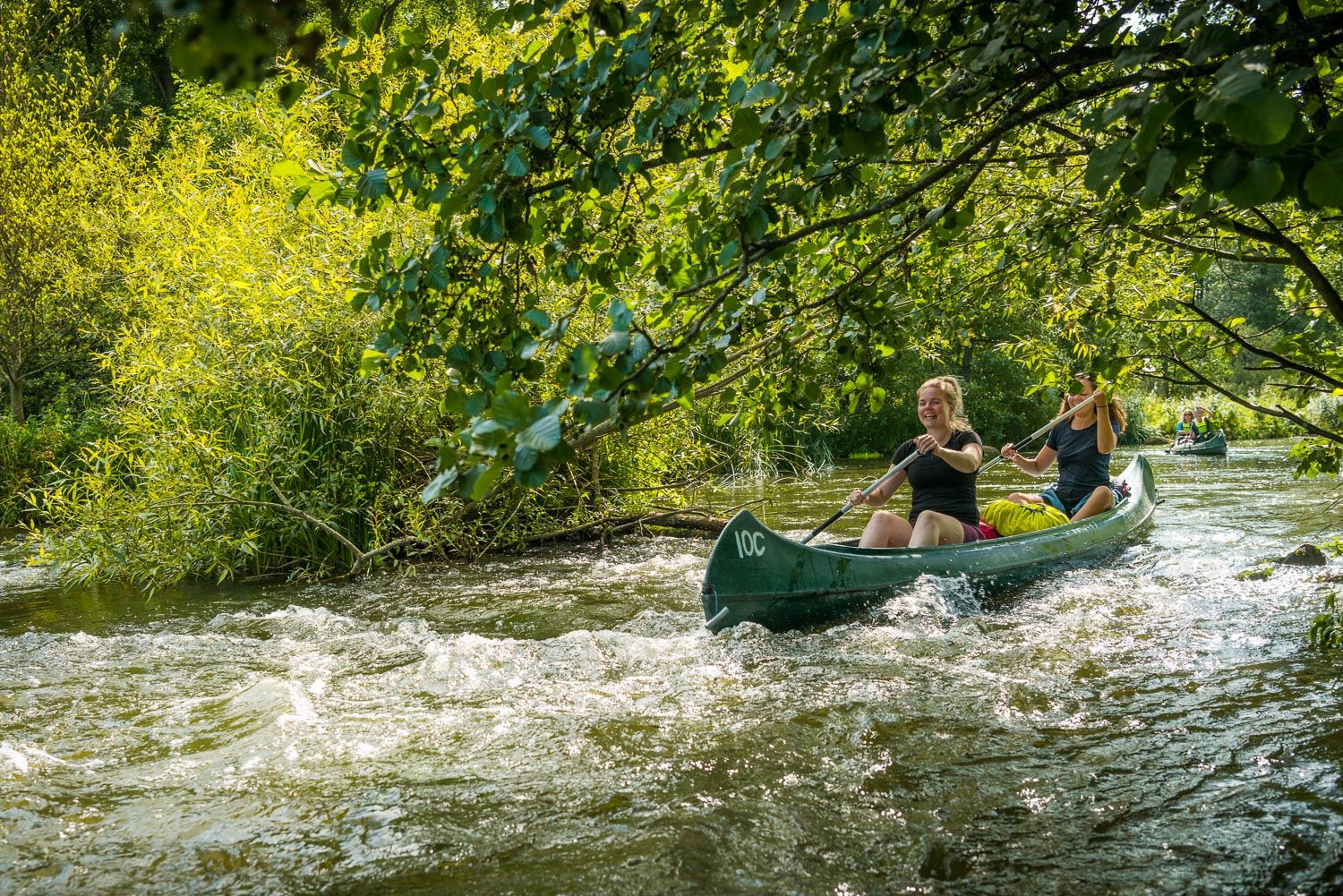 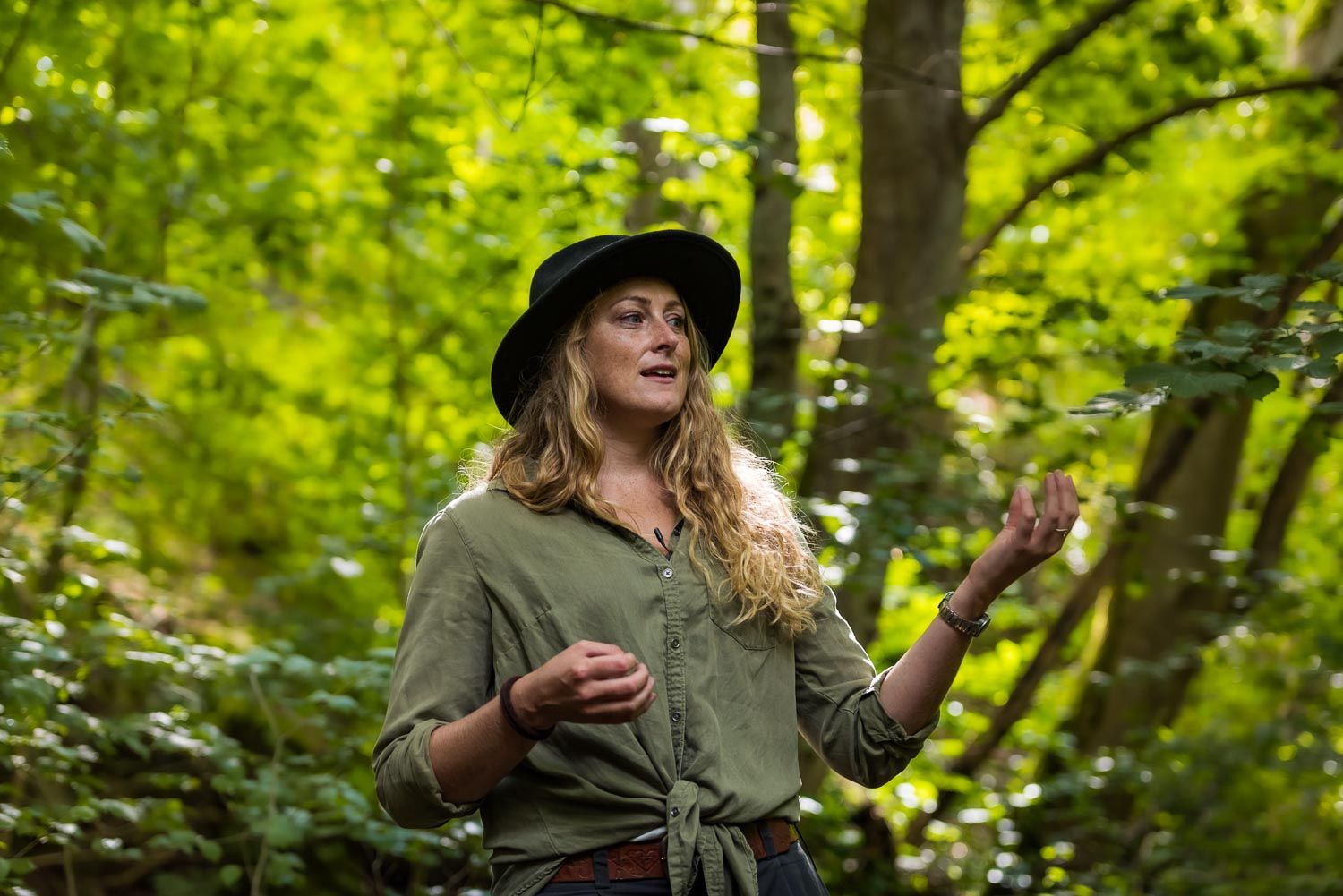 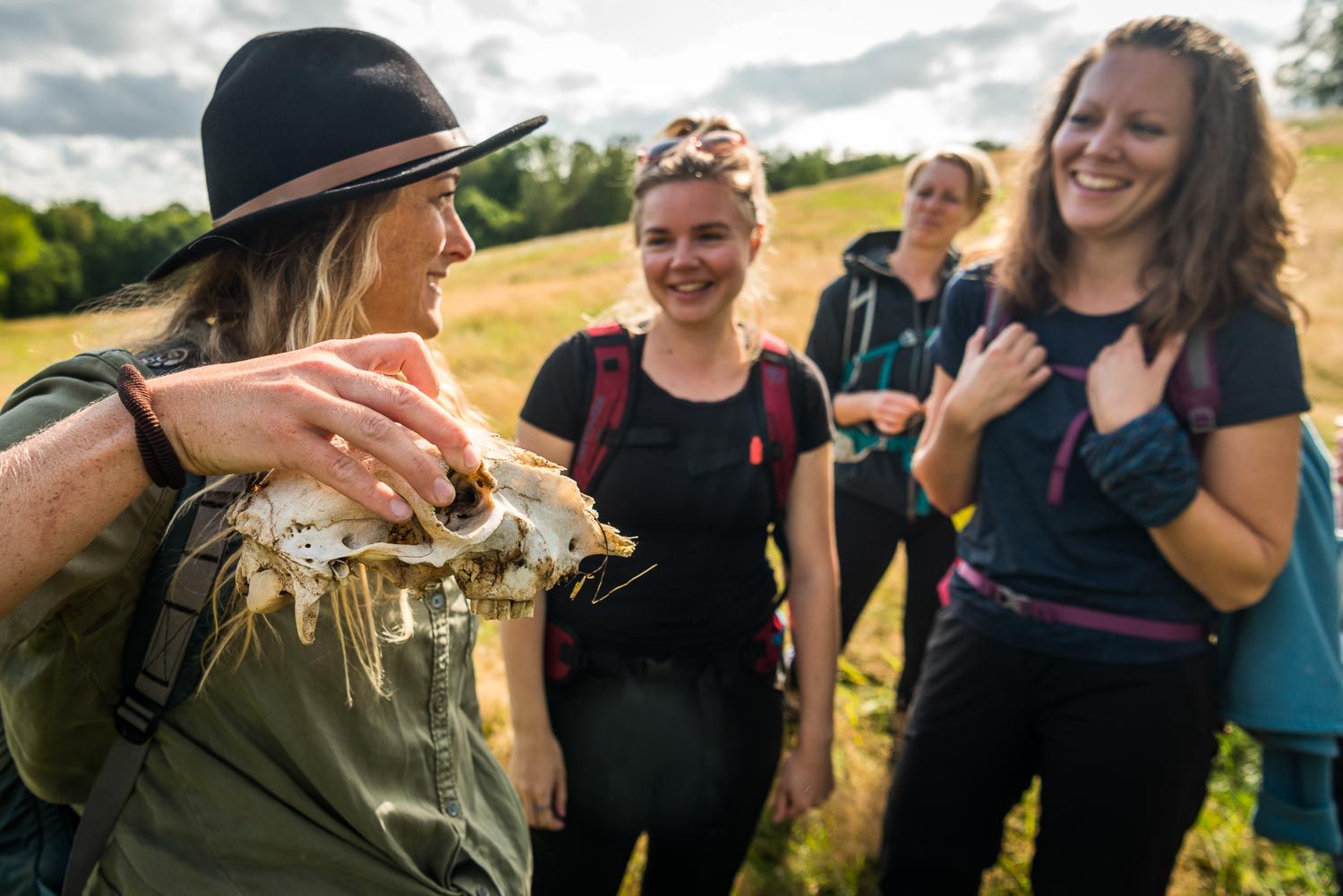 32-year-old Felicia was born on a farm. Soon after she was born, she was given her first horse, Ramses. When she turned 20, she got her first dog: Billabong. He happily roams around our base camp throughout the day. Felicia never experienced screen addiction. As a child, she preferred building huts with her older brother to playing video games. Later Felicia became a kite surfing teacher and mindfulness-instructor, but officially she is a landscape engineer. When I asked her about her life motto, she replied: “My goal is to build a life I don’t need a vacation from.”
Friluftsliv

At first, I thought forest bathing was about a jacuzzi in a mossy forest. It turned out to be something completely different

I also got to meet her parents, Per and Susanne, two beautiful individuals who are helping their daughter prepare lunch and dinner today. They go above and beyond for their daughter. A big shower hit, just as we pulled our canoes ashore. Per and Susanne were there straight away with umbrellas. It made me think of the Swedish saying: “Det finns inget dåligt väder, bara dåliga kläder” which translates to “there is no bad weather, there are only bad clothes”. This saying is time and again used when it is raining and school children do not want to go outside. It also indicates how nature-loving many Swedes are.

That is what friluftsliv is all about. The outdoor life. “Friluftsliv for my thoughts.” By writing this, Henrik Ibsen coined this typical Scandinavian word. However, according to fjord landscape specialist Willem van der Bilt it was polar adventurer, diplomat, and folk hero Fridtjof Nansen who invented the word. Van der Bilt says: “According to Nansen, friluftsliv is about finding the balance between body and mind in nature. Outdoor sports as a means, reflection as the goal. A bit of new age basically.” I can already feel it. Rain is about to fall just when we want to have lunch. It is true that there is no such thing as bad weather in Sweden. Certainly not if your parents are called Per and Susanne and immediately hand out ten umbrellas as soon as the first drops begin to fall.

No stimulants, just green. I think I am beginning to understand

The two days of mindfulness consist of canoeing, hiking, and yoga. All together you call this ‘forest bathing’. At first, I thought forest bathing was about a jacuzzi in a mossy forest. It turned out to be something completely different, something Japanese. “Are you about to go tree-hugging?” my friend asks after I read the Wikipedia page to him. ‘Shinrin-yoku is a form of nature therapy from Japan. The term translates to ‘forest bathing’ and is a form of mindfulness: the concept means that you immerse yourself in the atmosphere of the forest and experience the surrounding nature with all your senses. This heath mania started in the 1980s and was picked up by various lifestyle magazines from 2016.’ 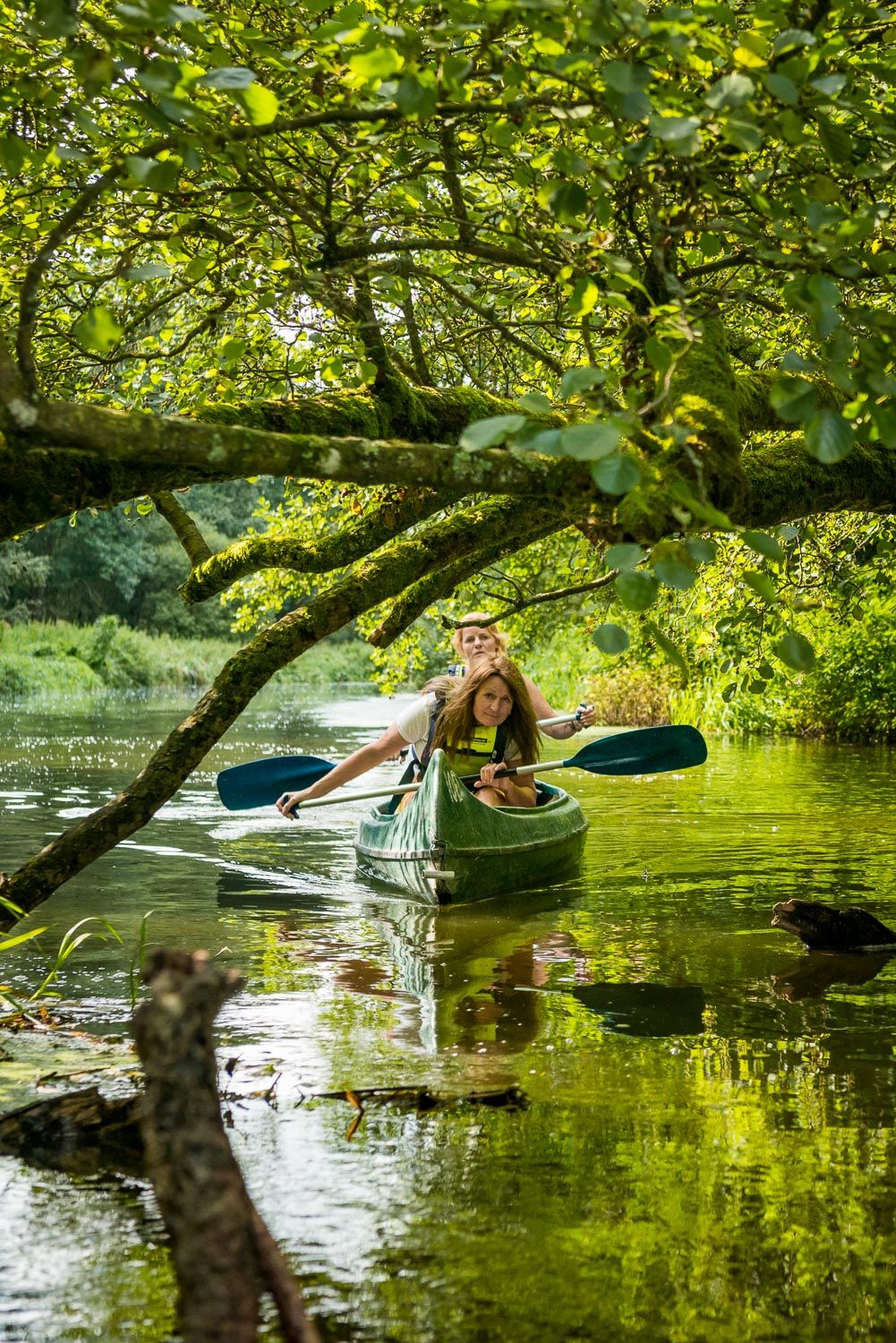 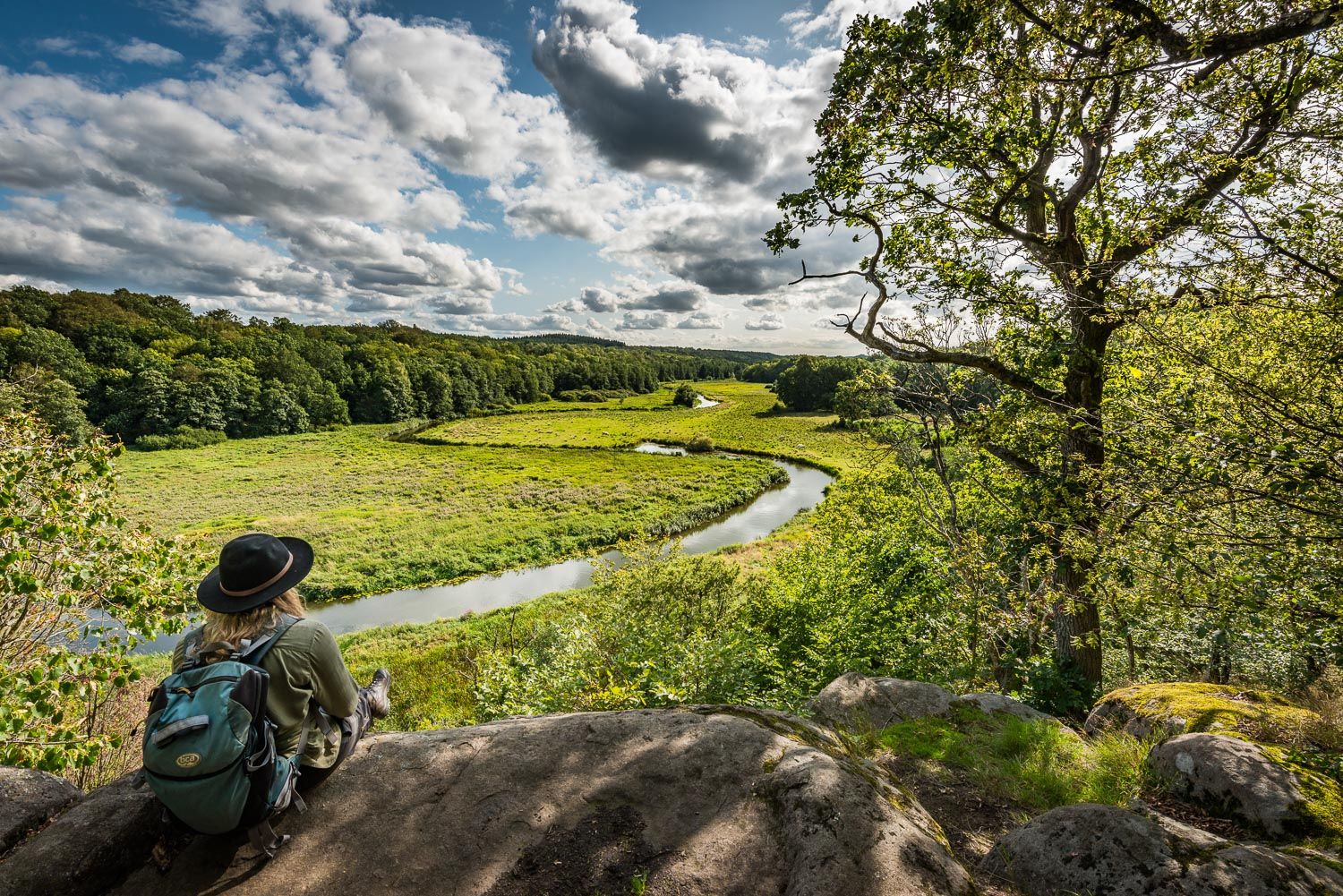 A soft shy woman’s voice: “Hello everybody, we are going to do an exercise.” Felicia tells everybody to follow her into the forest. We gather round in a circle and listen carefully to what she has to say. She pinches a raisin between her thumb and index finger. Usually, I eat these within a nanosecond, but that is not today’s intention. Felicia asks us to look at the raisin as if we have never seen one before. “Please close your eyes and smell it. Squeeze it between your fingers and watch how it bounces back. Please keep it in the sunlight and discover the colours of this majestic creation of nature. Put it on your tongue without swallowing it. What do you taste?” At home, I would consider this a bit too much. But Felicia has left an impression on me. I realise how quickly I normally eat, like a lizard that in a split second -plop- eats anything that moves.

Close your eyes and smell it. Squeeze it between your fingers and watch how it bounces back

When I return to my canoe, I notice I am paying a lot more attention to my environment: the waving cattails in the reed, an elegant line of dancing seagrass under my canoe; and next to me a pond skater, Gerris lacustris, an insect that walks on water without getting its feet wet. My senses seem supercharged. After the mindfulness training the dragonflies appear to be bluer, I see more butterflies and look, over there, a cow standing near the water. 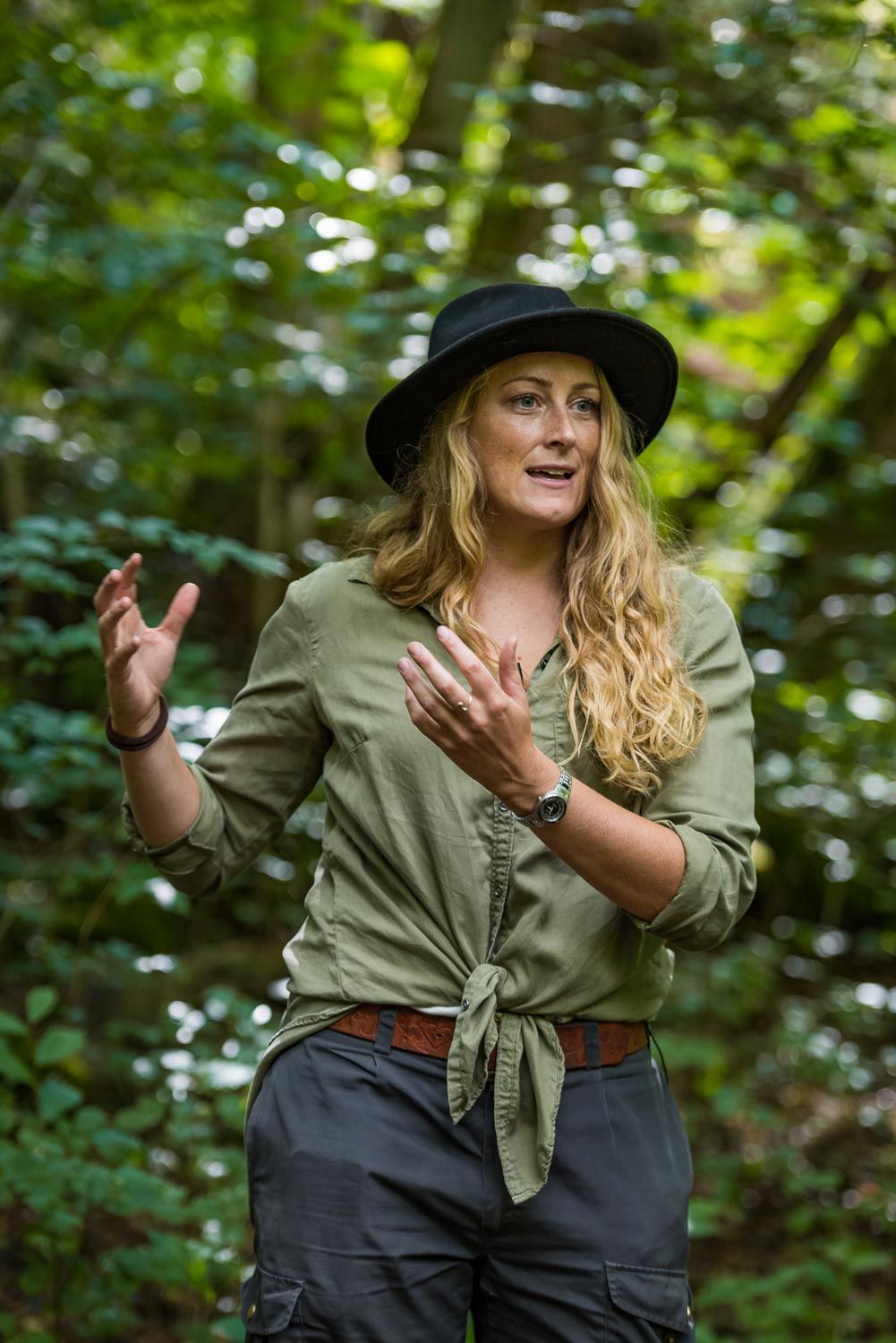 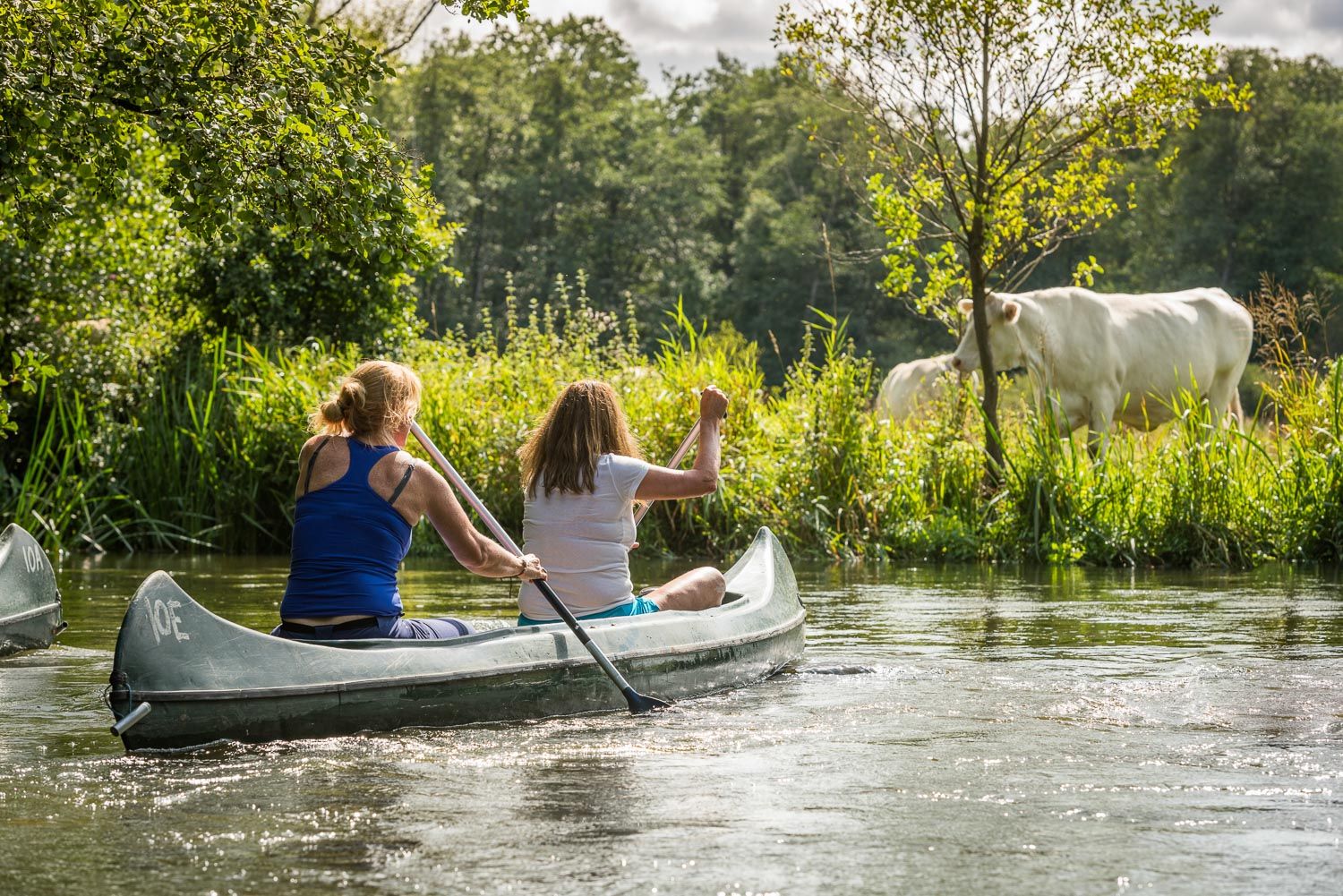 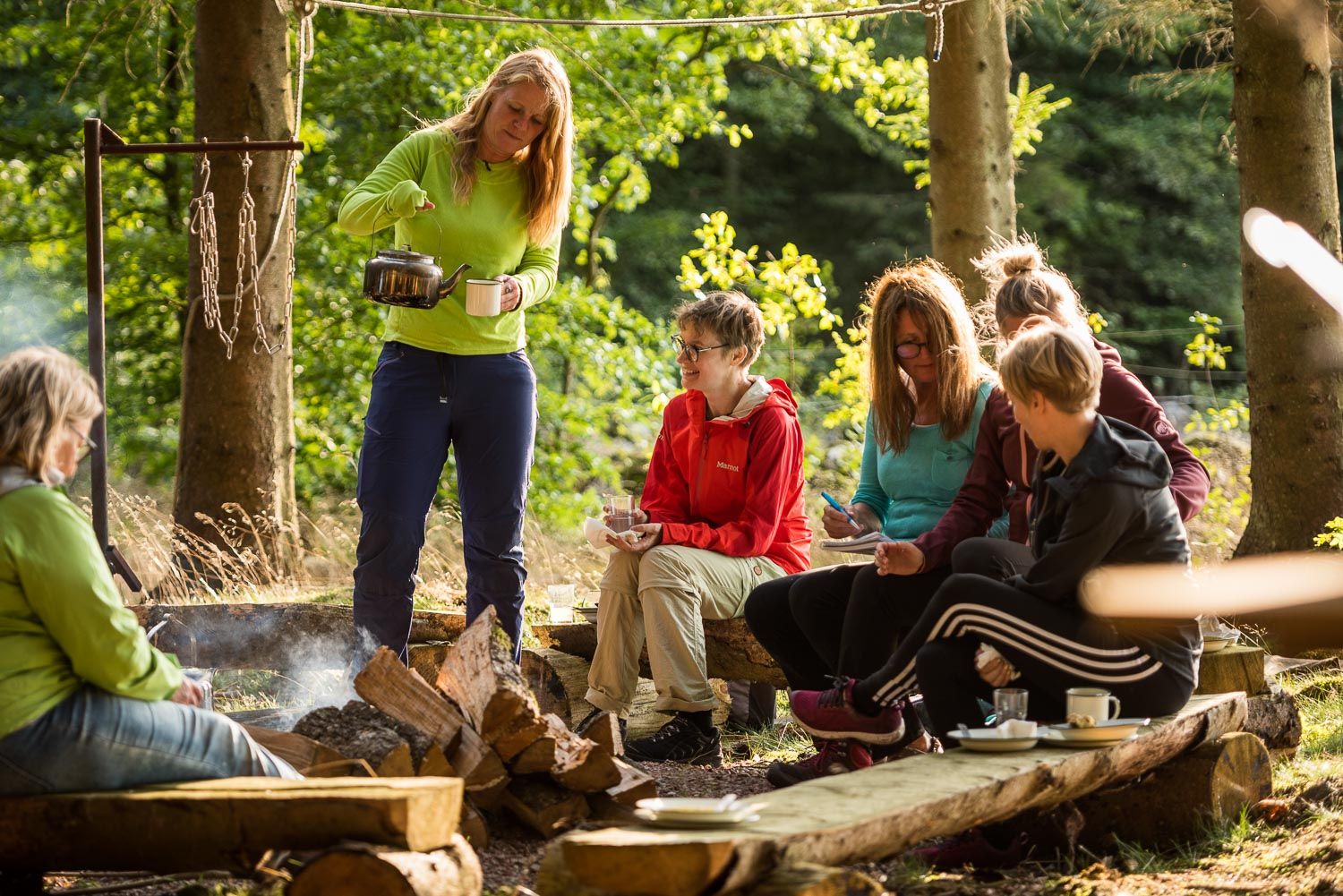 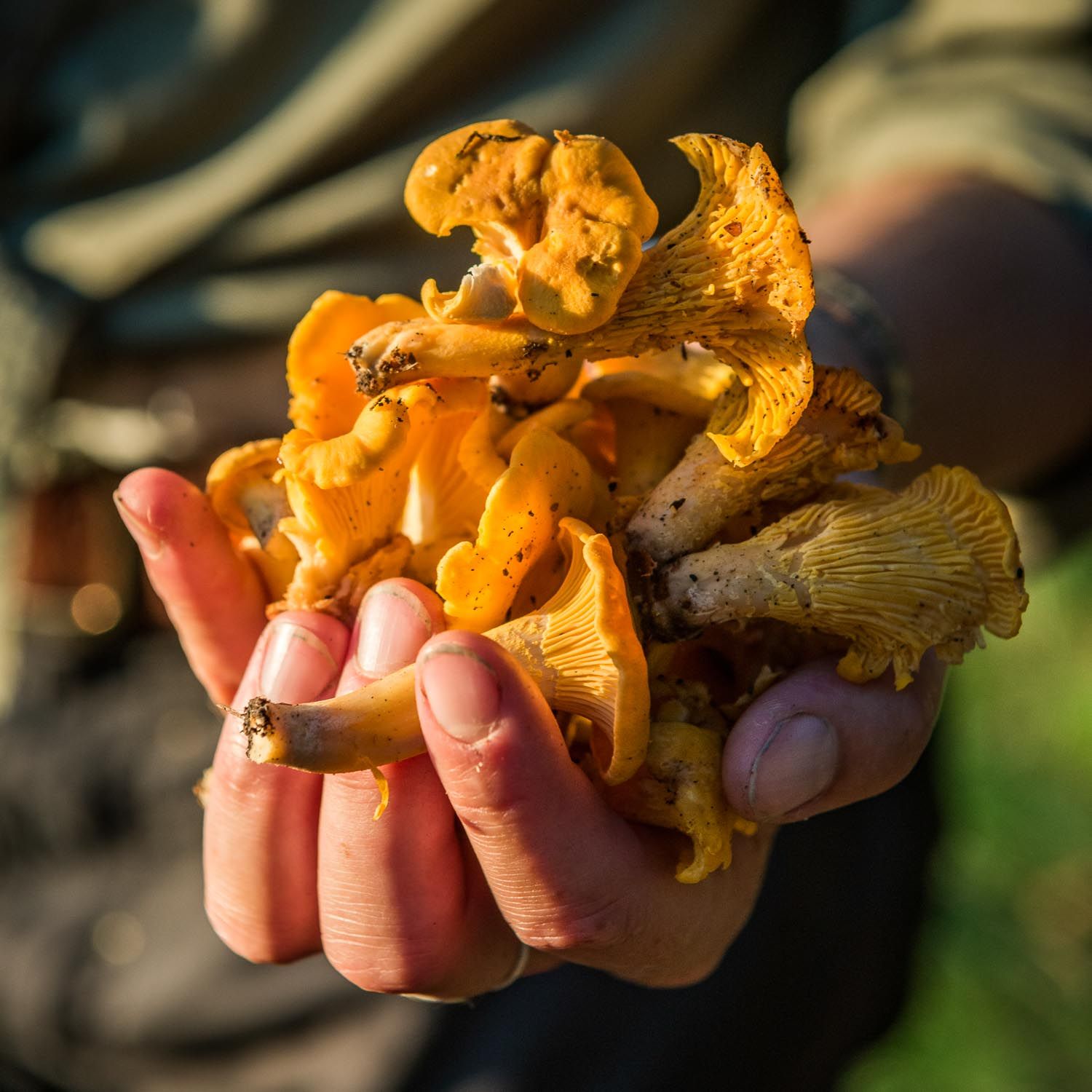 Downstream
We boarded our canoes at the canoe centre in Stockamöllam this morning. A place that intrigues me, because the canoe centre is located in an old furniture factory. This is where they used to make deckchairs for the Swedish American Line, says Felicia’s father as he puts our suitcases in the car to bring them to our camp. We canoe along the Rönne å, a river that meanders through the landscape like the “S” in Skåne. Now and then, small rapids generate female screams and for 12 hours the sound of the paddles dominates. A metronome on water.

We are going to do some outdoor cooking tonight. Swedes love it. We see smoke ahead, and where there is smoke, there is food

No internet
After a canoe journey with the occasional unruly rock (“Keep right, everybody!”) the 8km Skåneleden hike awaits. While walking, I continue to experience the benefits of the mindfulness-training. Everything is more intense than during my forest walks at home. The mossy rocks are almost fluorescent. The branch under my foot doesn’t creak; it snaps like sandalwood in a fire. I smell lavender; I hear the rush of the wind in the treetops. I caress a bit of tree bark with a flat hand while my eyes are closed: I feel velvet. I look at the sunlight coming through the leaves; pixels of light. I take a photo with my phone without noticing the lack of internet. Zero data bars, no WiFi, no contact with the world outside this forest. No news, no messages, no Facebook. Just green. I think I’m beginning to understand.

Nettle soup
Along the way, Felicia gives us one last assignment. We all have to forage for our starter tonight: chanterelle. This wild mushroom with its typical funnel shape grows in her forest. It is yellow, the forest’s gold. Felicia’s mother has already picked the nettles for the soup. If all is well], the soup is already simmering. The flavour of chanterelle is spicy with a hint of pepper and a smell reminiscent of apricot. We are going to do some outdoor cooking tonight. Swedes love it. We see smoke ahead, and where there is smoke, there is food. 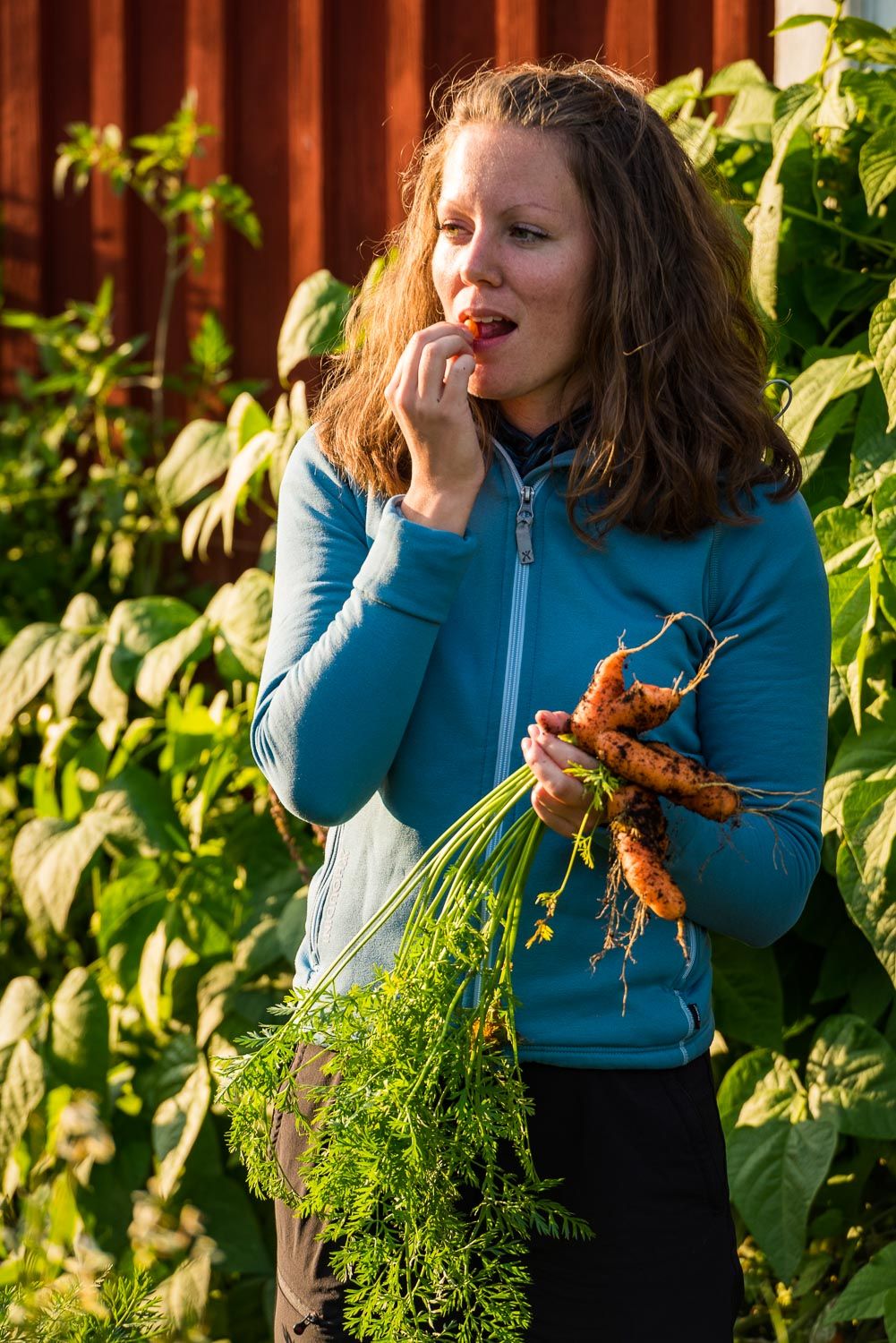 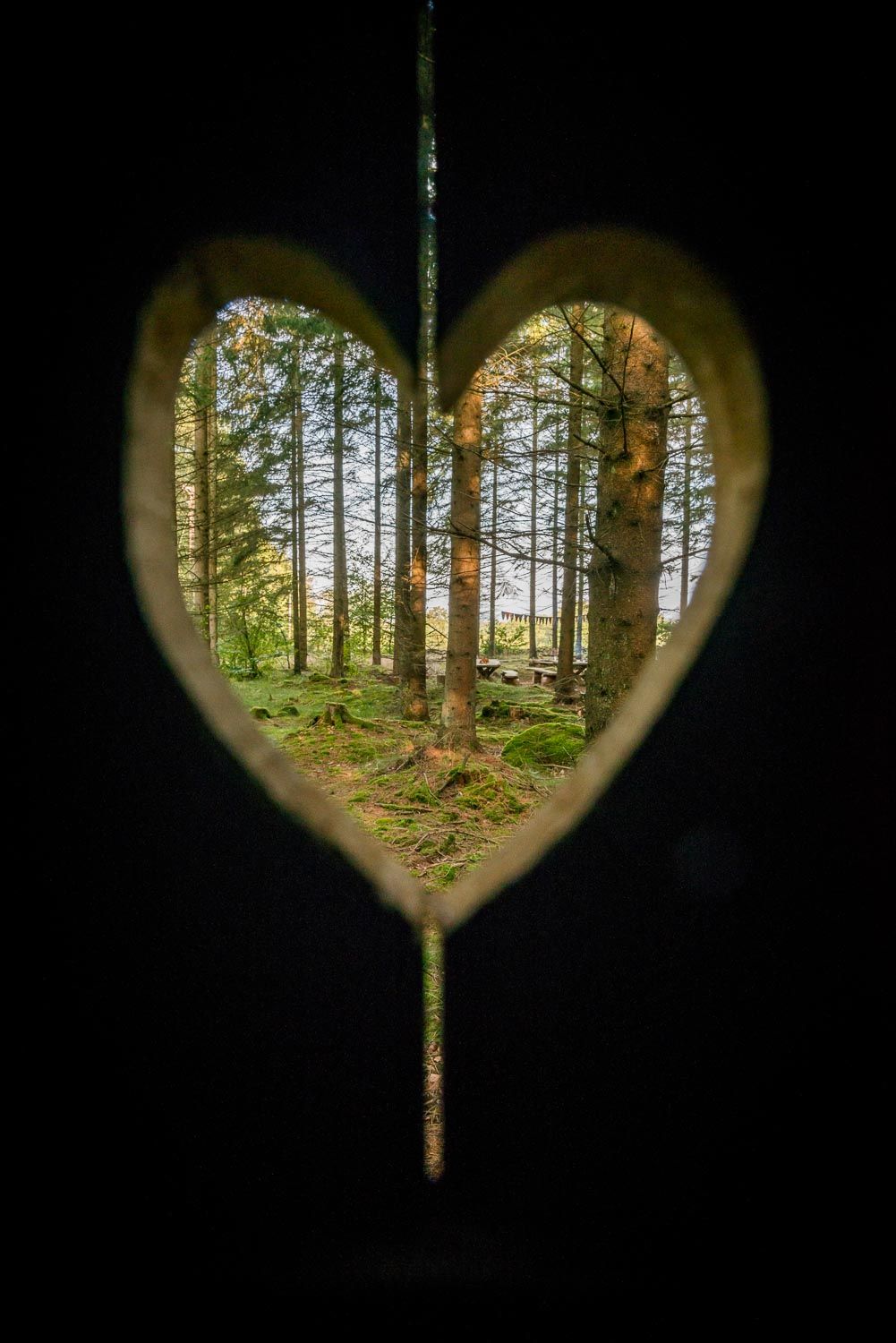 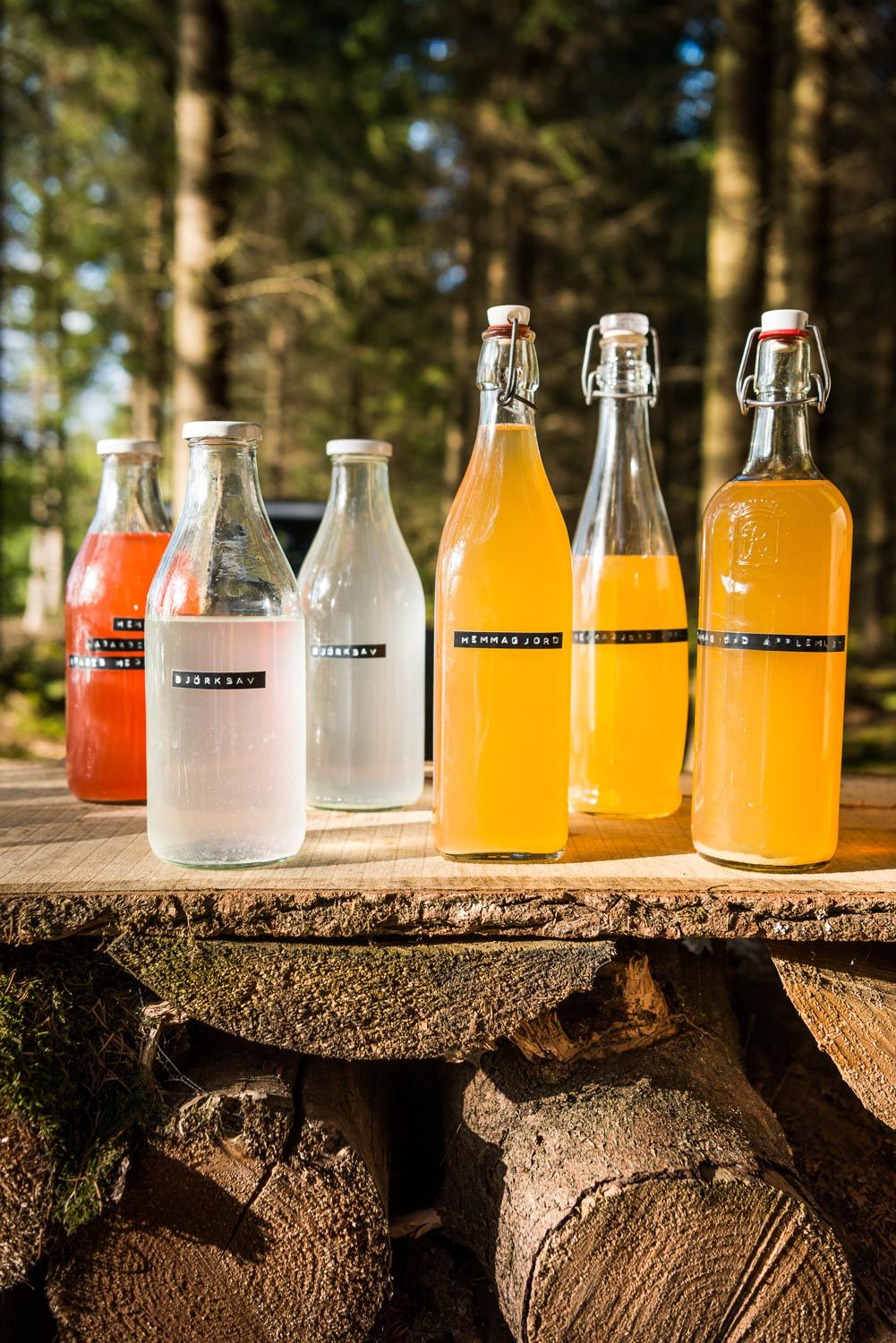 Per and Susanne meet us with a bowl of nettle soup and a hug, which is also very Swedish: the hug. Billabong nestles on Felicia’s father’s lap.
“So, how was it?” he asks.
“Beautiful”, I reply, and I place myself near the fire.
Not much later, I knead my dough around a long stick. I put the stick in the fire for a while. Suddenly several new sticks appear, just like the ten umbrella’s that appeared earlier this afternoon during lunch. It hasn’t rained since, by the way. The Swedes are right: There is no such thing as bad weather.

In this setting of dancing sparks comes a practical announcement from Felicia. “It might be a good idea to put our tents up, now that it is still light”. She is expecting us at her parents’ house afterwards. We are going to pick tomatoes in the backyard, as well as carrots, lettuce, artichokes, and black currants.

Sleep under the stars
“Did you also hear that cat meowing tonight?”
It is the first thing I ask when I open my tent. I have no complaints; I slept like a moose. The moss provided a soft mattress.

One of the other women thinks she heard a deer last night, a grunting deer. I clearly heard a cat. It turns out to be a cat owl. Felicia knows exactly where its nest is, to the left of the fourth row of trees; a nest with three young ones.  A cat owl, I had not heard of it before. That doesn’t say much, though, because I also hadn’t heard of forest bathing before. Speaking of forest bathing, it is time for yoga. We grab our mats and stretch out our arms to the treetops. It is still early, but slowly, the sun gains its strength.

What was the saying again? All you need is a canoe, some friends, freshly grilled food and a selection of silly drinking songs.

Three hundred eighty kilometres of coastline, over a hundred lakes, and two meandering rivers: Helge å en Rönne å. Water is never far away in Skåne. This makes the south of Sweden a perfect canoeing destination. Several organisations rent out canoes and kayaks. They often arrange the transportation of your luggage as well. If you want, you can rent a dry-bag, and in some cases even camping gear: a tent, a grill, and a fire plate. 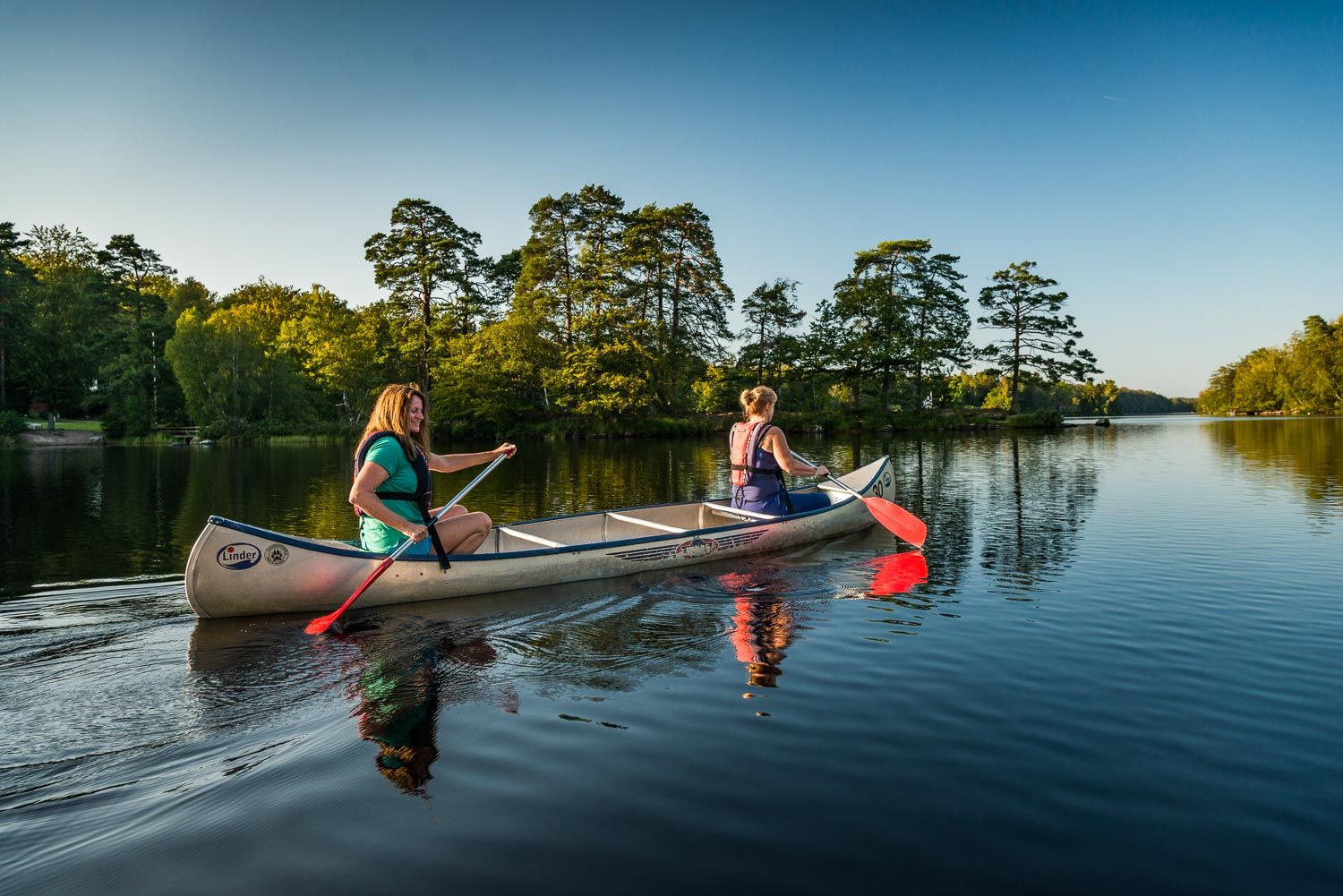 Our favourite canoe spots in Skåne

Rönne å:
This winding riving resembles the ‘S’ in Skåne, twisting and turning in the landscape. Don’t worry; the rapids aren’t intimidating. Serenity rules this river.

Immeln:
Immeln is the third biggest lake in Skåne. After an hour of canoeing, you moor at one of the 200 small islands for a memorable night of slow cooking under the stars. Paddle, hang out and chillax.

Kullaberg:
Walk to the edge of Kullaberg Nature Reserve, a steep rock full of quartz and crystals, and you can see the Danish coast. Below are over 20 caves. The best way to discover these is from the water. Chances are that you will meet a bottlenose dolphin on the way.
kullabergsguiderna.se
kullakajak.se

Discover the nature life of