Hiking in the Heart of the Holy Land
Palestinian Heritage Trail

Thousands of years of history come together on the Palestinian Heritage Trail, formerly known as the Masar Ibrahim or Abraham Path, a hiking trail that crosses Palestine from north to south. Abraham was a legendary figure in Christianity, Judaism and Islam, known for his hospitality and kindness toward strangers. In search of adventure and the famous Palestinian hospitality, WideOyster Photographer Frits Meyst, follows in the footsteps of Abraham over the West Bank of the Jordan river.

The mosques have just finished their morning prayer when we leave the home of our hosting family in Awarta, with our guide Nedal, a friendly bearded guy, who speaks fluent English. We walk through the hills of the Nablus region, where the main crop seems to be olives and almonds. Under the low clouds we meet a farmer plowing his land with a donkey. He greets us and talks about the walled orchards on the other side of the mountain. “It is important that we maintain our fields!” he says while pointing at a fenced settlement with trailer homes. “If we don’t, the Israeli settlers from over there will just take it and expand the settlement. We are even restoring old groves to prevent them from coming here. Otherwise we loose our ancestral lands.”
It is a sobering thought, while we continue the walk through blossoming fruit trees in a spring coloured landscape. Nedal tells how he grew up in a refugee camp. “It is not what you think, with tents”, he explains. “It is like a city where 3 generations of Palestinians grew up after their grandparents were expelled from their lands during the founding of Israel in 1948. We didn’t have much, and I couldn’t go to university”. Nedal made the best out of a bad situation and found a way to learn English and become a guide, and a good one at that. 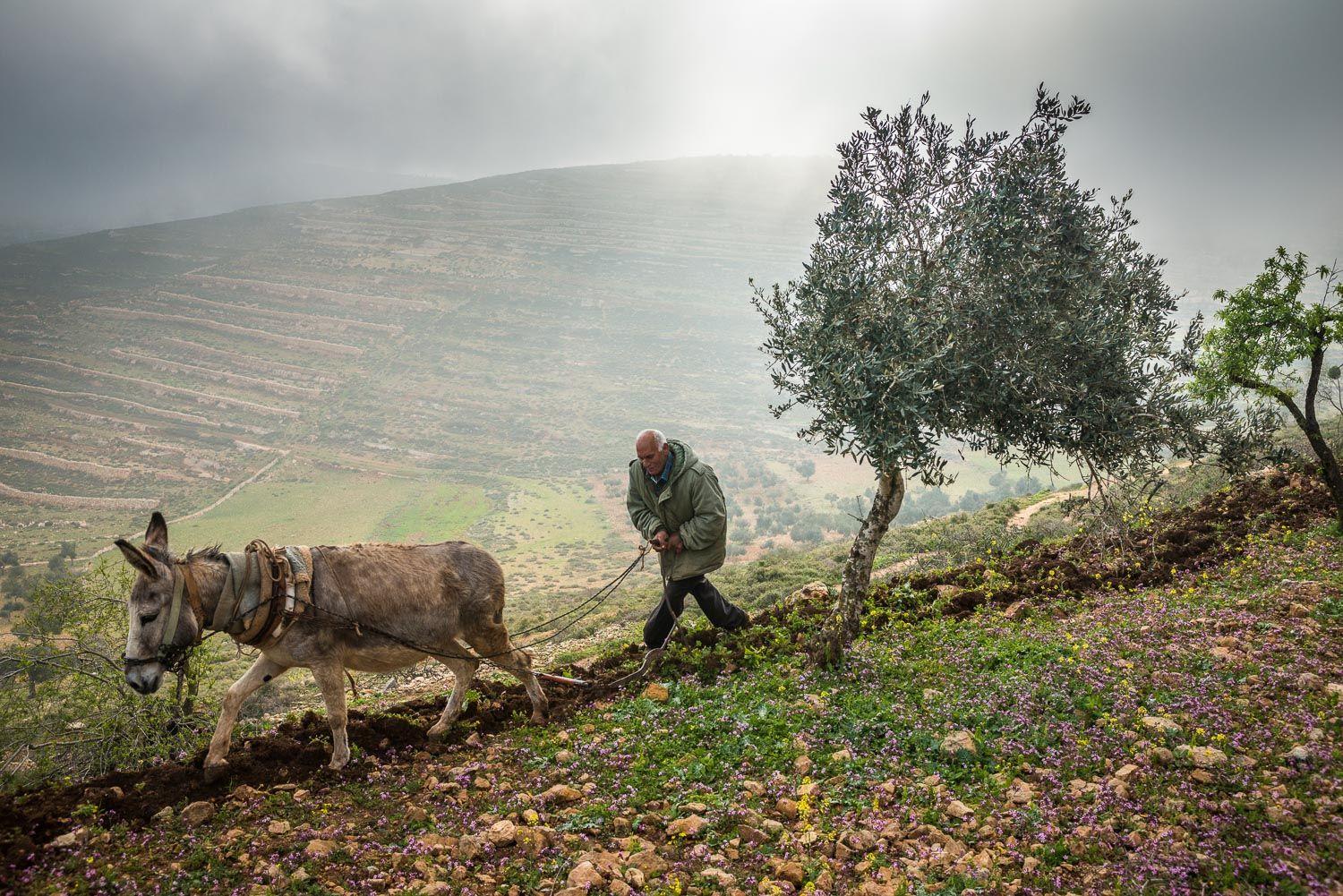 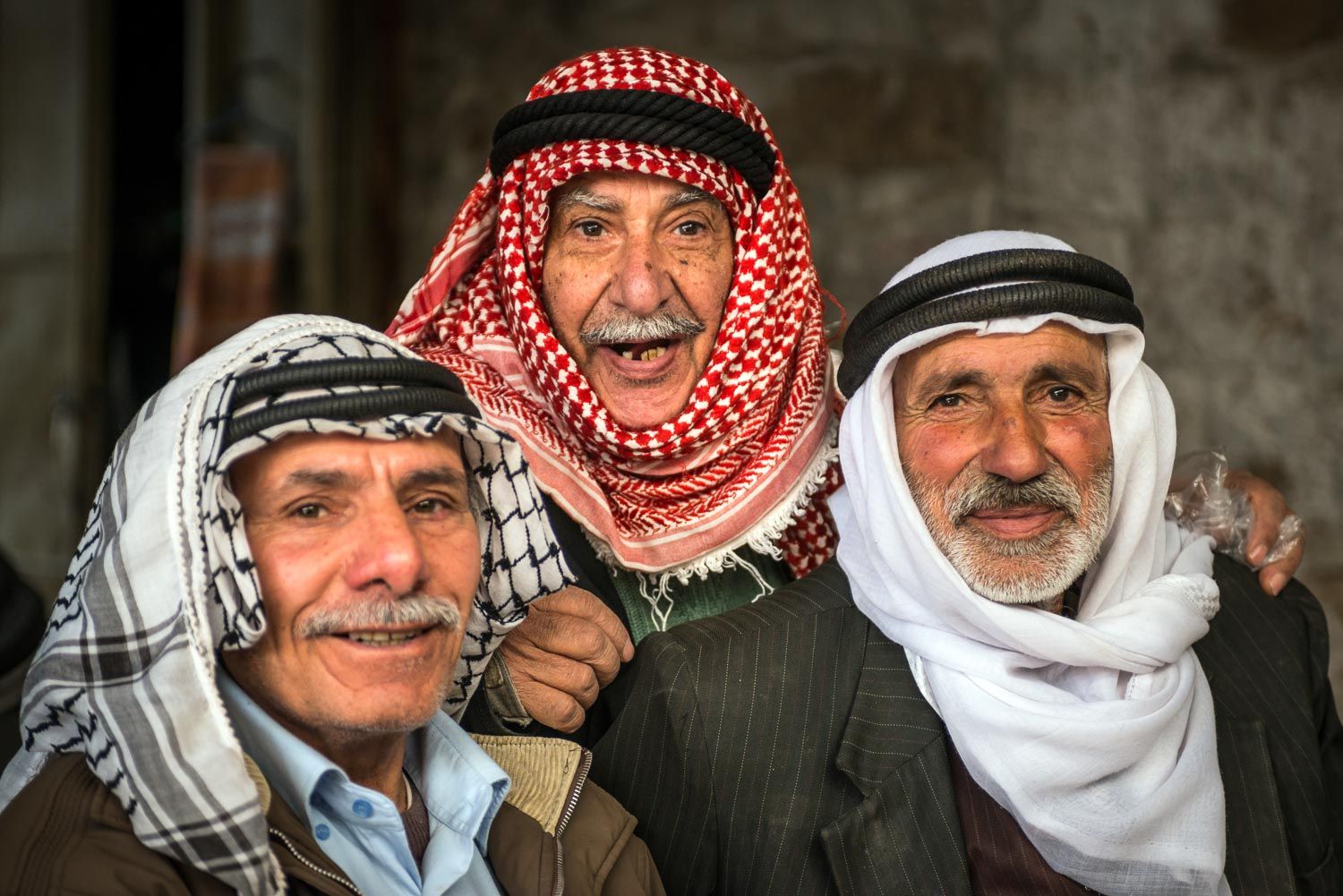 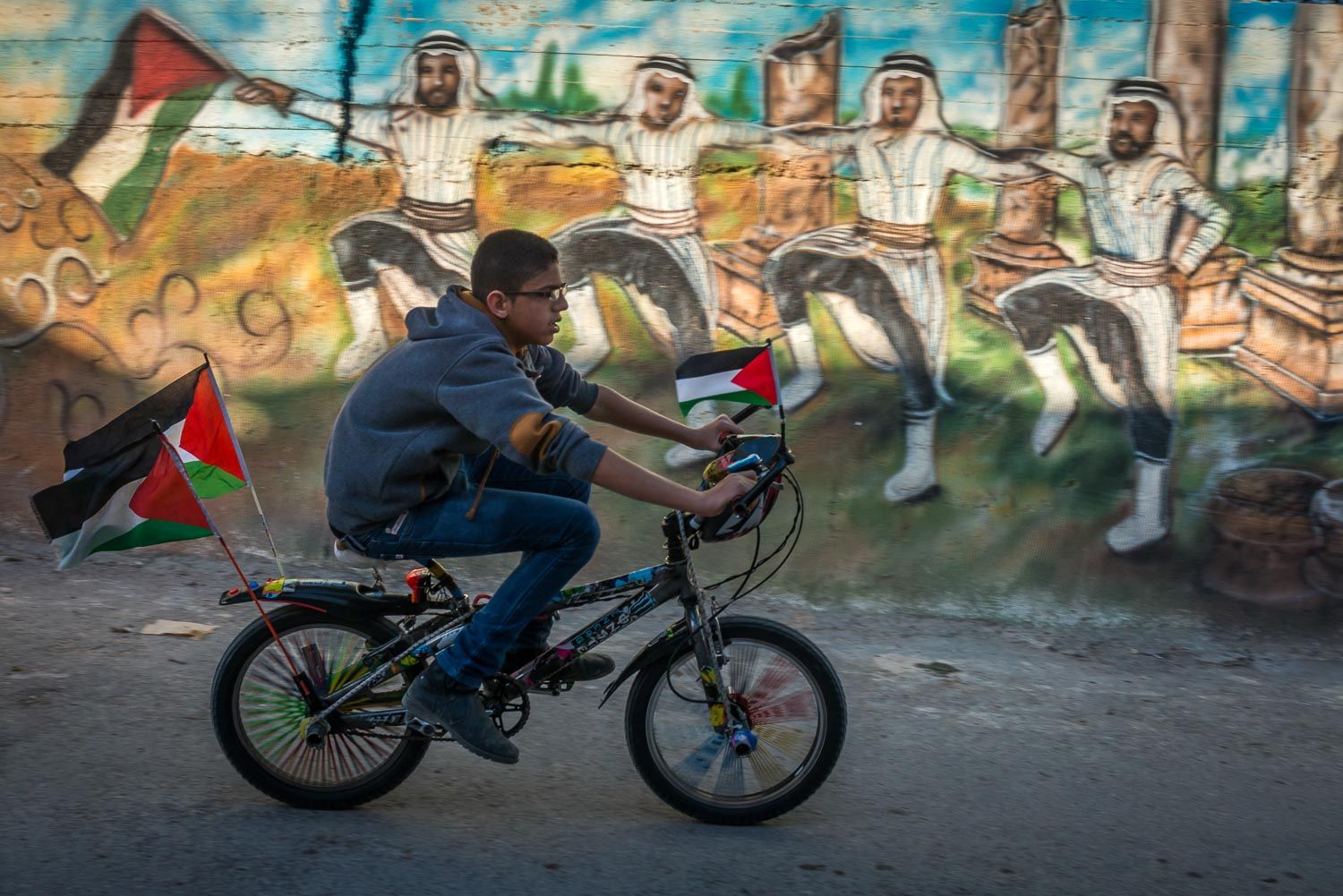 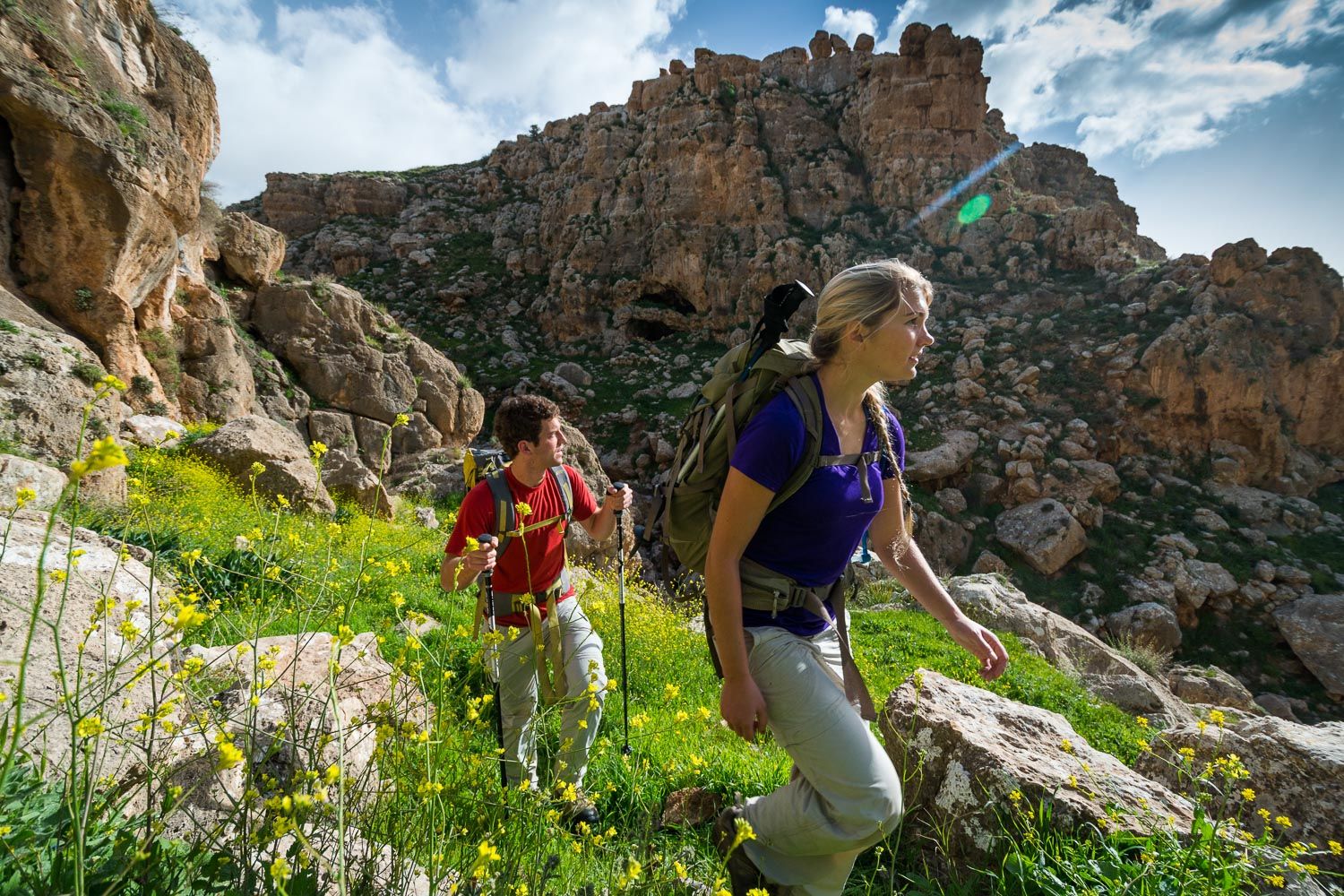 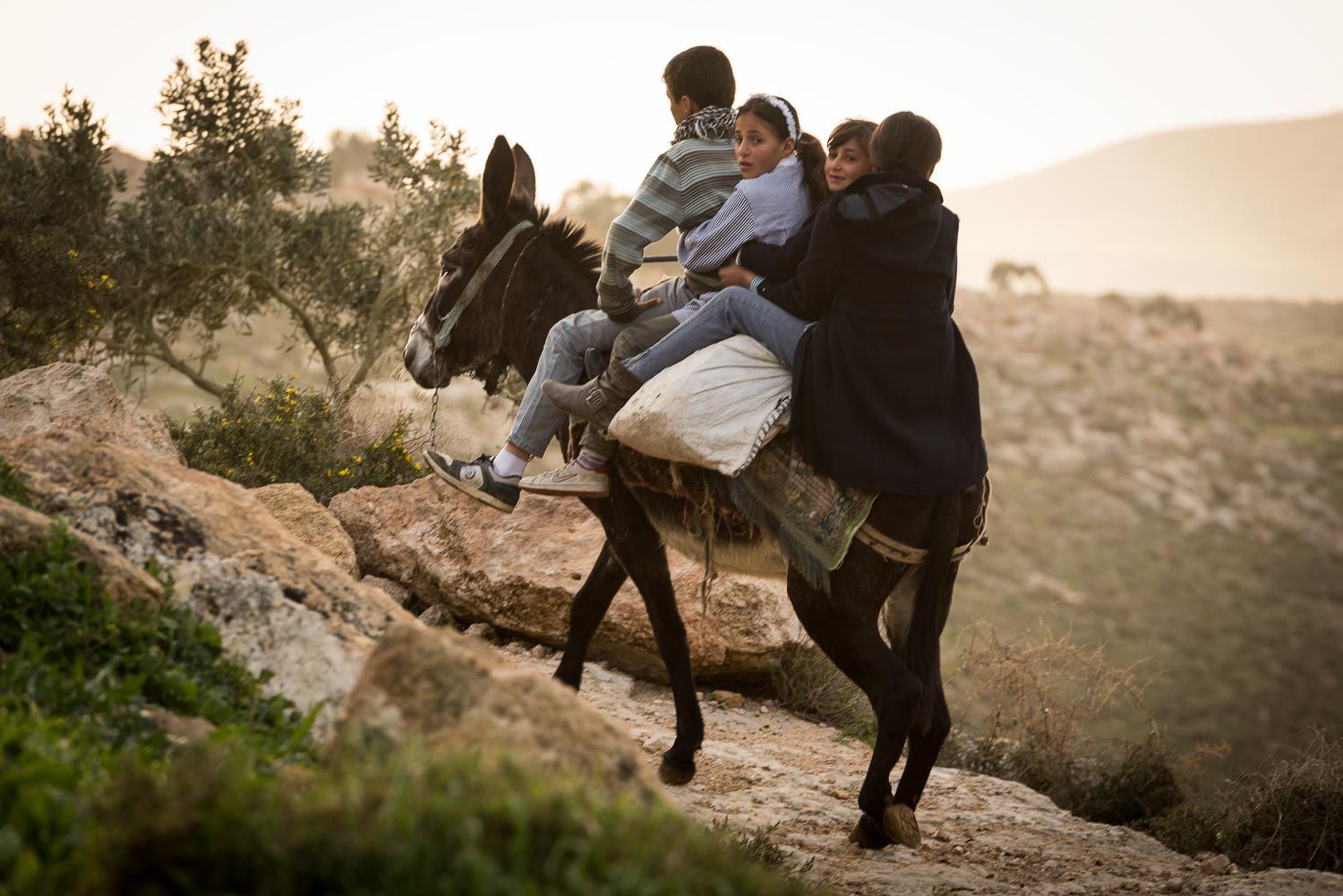 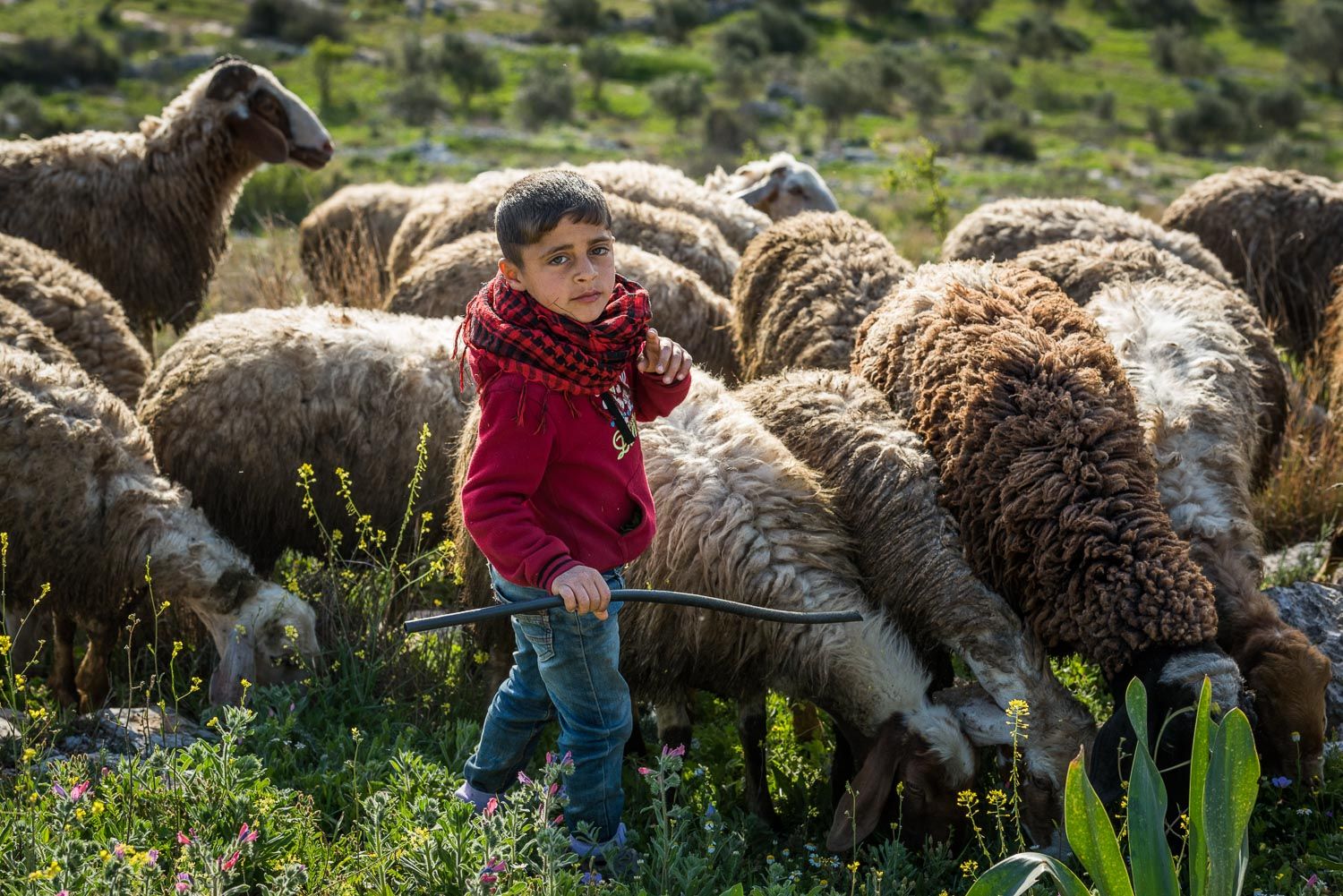 On the dirt track we see a donkey with a boy and 3 girls on top. I want to take a picture but they don’t stop. In fact they speed up and try to flee. That is a first for me, because normally it is difficult to keep the children out of the pictures. “They are afraid of you, because they think you are a settler”, laughs Nedal. I am laughing, but actually it is really sad that the first thought they have when they see a stranger is, that something bad will happen. This is why you actually need a local guide, so that the people you meet, know that you mean them no harm. Truth be said, everywhere we meet people, we are greeted by a friendly ‘Salam Aleikum’, may peace be upon you.

Salam Aleikum, may peace be upon you

A wish that almost came through in the 90’s. As a young documentary photographer I covered the world’s trouble spots and the Middle East in particular. That is how I first found my way to the West Bank of Palestine. It was an era of hope for the region, when Yasser Arafat and Yitzhak Rabin signed the Oslo Accord in a bid for peace between the Palestinians and the Israelis. It was the first time since the occupation of the West Bank by Israel in 1968, that the Palestinians would have authority in their own land again. That hope for peace was rudely shattered when Rabin was assassinated by an Israeli right wing extremist followed by a series of Palestinian suicide bombers targeting Israeli civilians. The Israeli right got to power and built a wall to keep the Palestinians out. 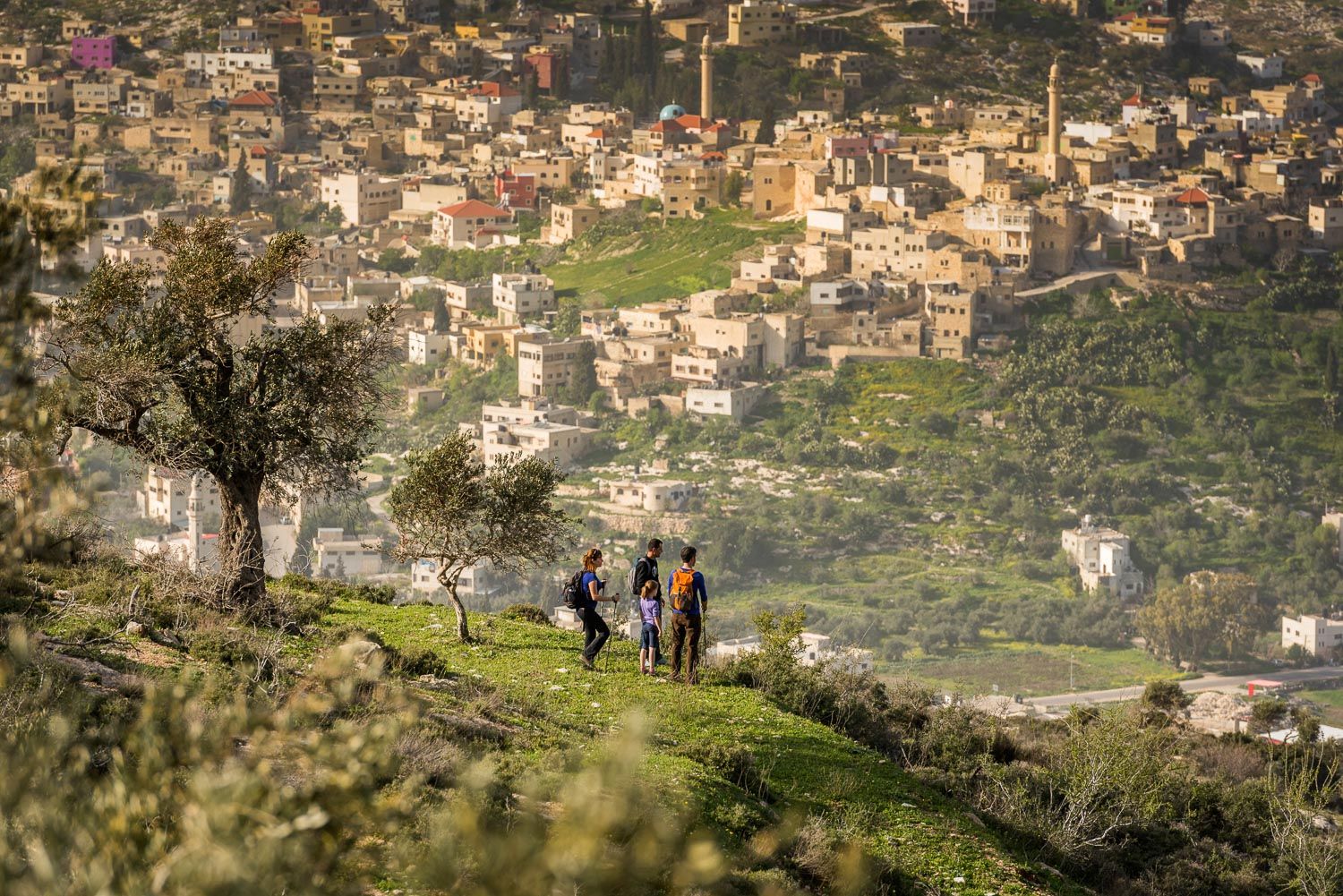 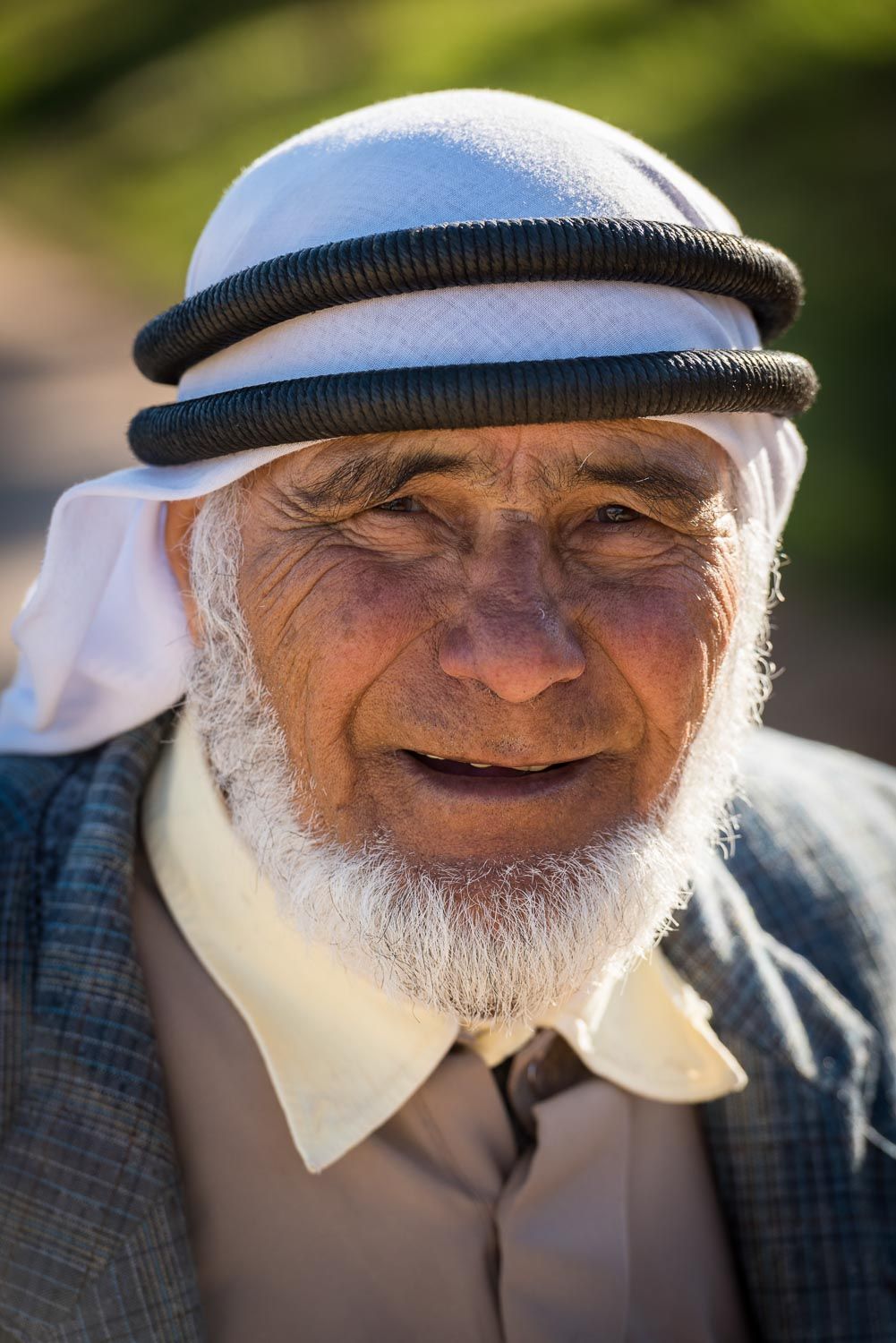 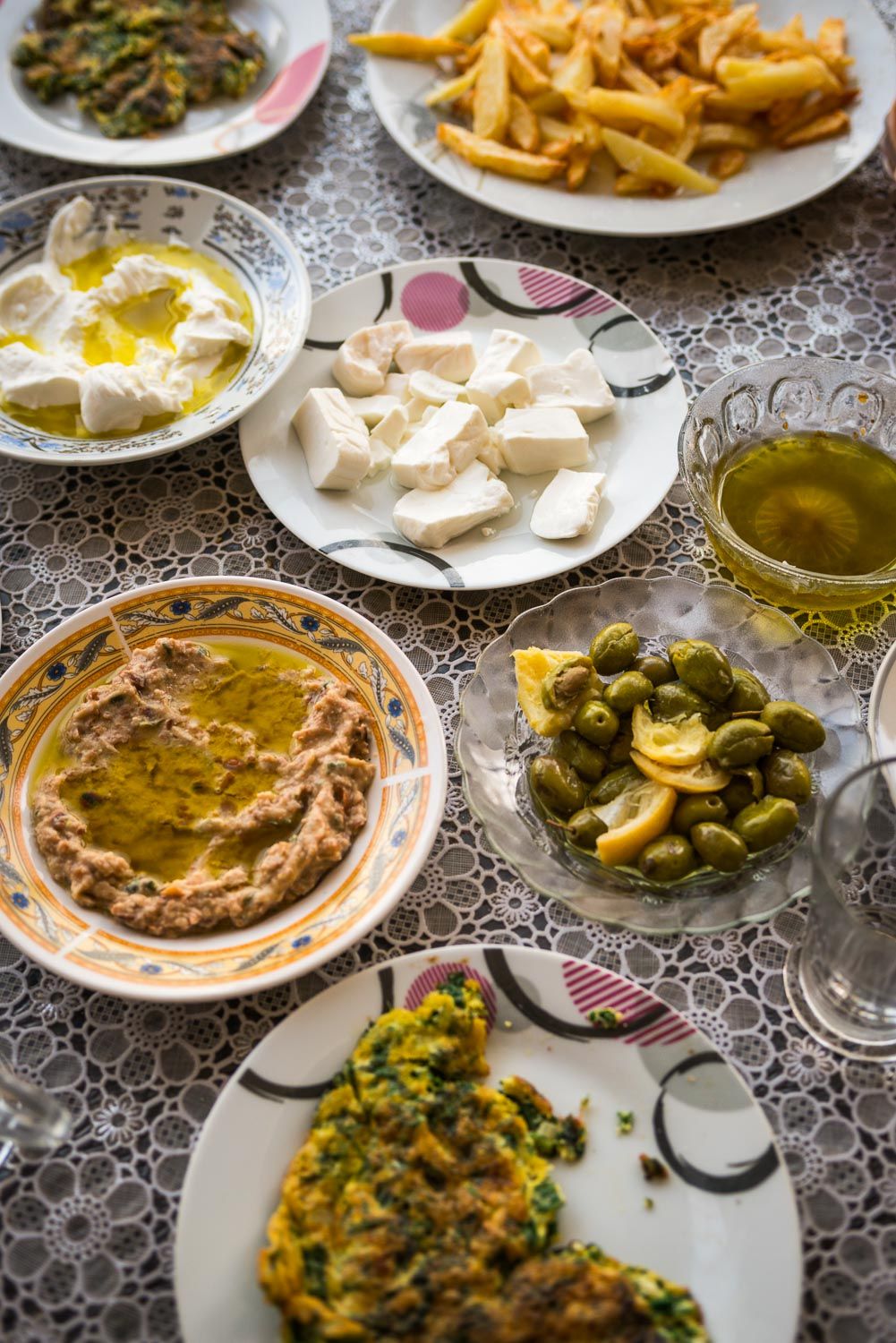 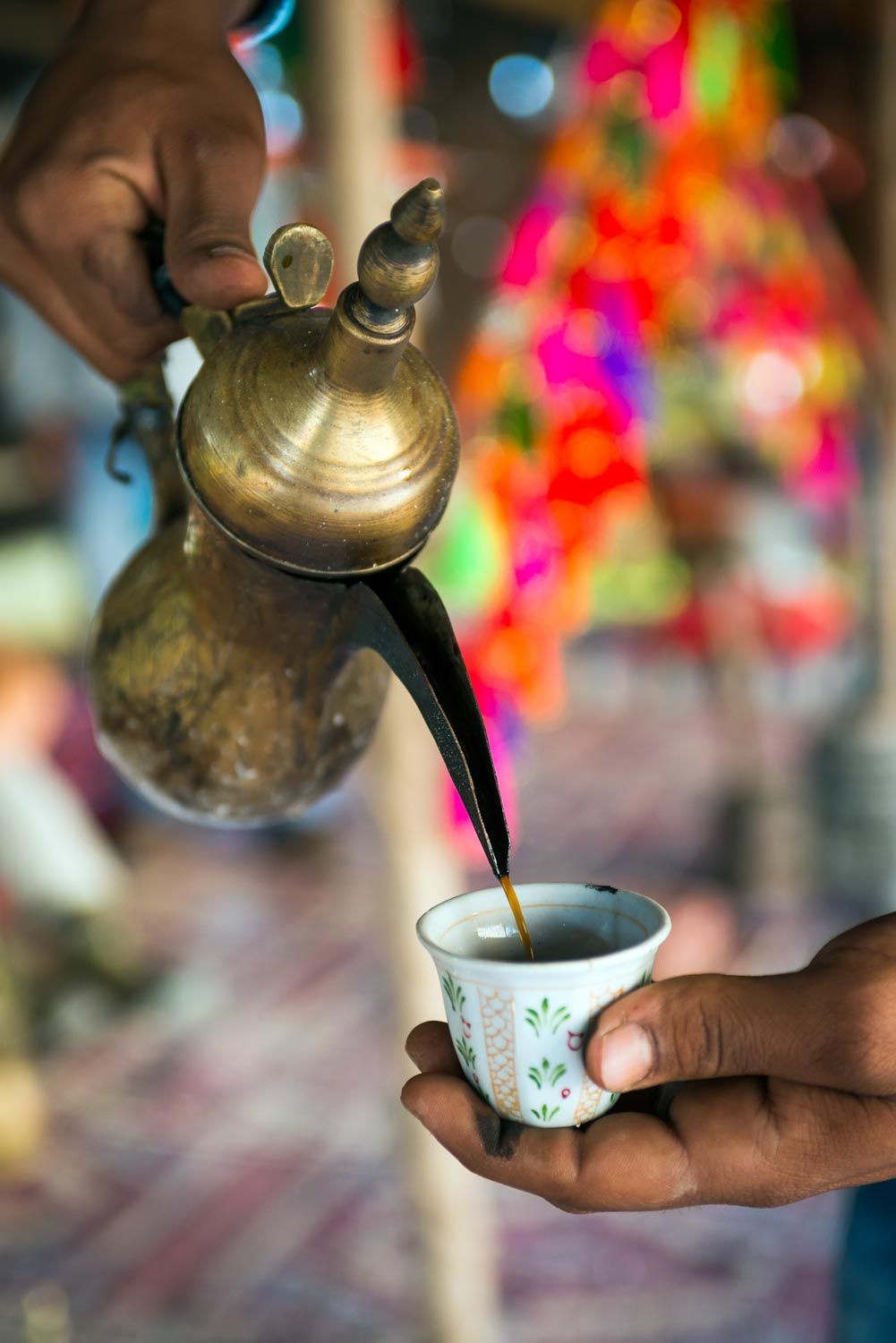 Now, 25 years after the Oslo agreement, I am on Palestinian soil again. Just as the situation in the Middle East changed, my work changed from documentary to outdoor photography. So by now you are asking yourself: What is he doing in Palestine and why do I read about it on a travel site. Well It was when I saw the job description that I knew this is the job for me. Photographing the highlights of the Palestinian Heritage Trail, an initiative to create the trail and tourism opportunities for the Palestinian population on the West Bank. The foundation trained guides and set up home stays and transportation, an infrastructure that provides the support for at least a month’s worth of hiking.

Back in the 80’s we may not have been at peace with the Israeli’s, but in the weekends they would come over for shopping and we would visit the beach for recreation

THE HILLS OF JENIN
Nestled among the hills just north of Nablus, the historic village of Sebastia offers a quiet and beautiful resting place where you can walk through thousands of years of local history. Sebastia is built on the site of the biblical city of Samaria, a city that underwent numerous sieges. It acquired its current name when Roman emperor Caesar gave the city to king Herod the Great, who then named it Sebastia. As we walk through the Roman site, kids are playing football on the Agora, the ancient market square. Sebastia is one of the hill towns, that also host numerous Ottoman era homes.

Abu Ayman, is our guide in the hills. As we walk he collects fresh oregano, thyme and even wild fennel. At the next break he pulls out the kettle and starts a fire. Tea time, with some of the best herbal tea I’ve ever tasted. “You know Frits”, Abu Ayman starts, “Back in the 80’s we may not have been at peace with the Israelis, but in the weekends they would come over to our town for shopping and we would go to the sea for relaxation. I would sometimes be stopped at a checkpoint and the guard, a young man, would ask where I am from, and then say that he was from the village just on the other side of the ‘divide’. We would talk about our area and even find names of people we both knew. All of that is over now. We are living in a very dangerous situation, because there is now a whole generation of kids on both sides who have never interacted with each other. The armed Israeli kid at the checkpoint is now as paranoid and scared as the Palestinian kid that has to pass through it. This makes it all the more difficult to live in peace with each other, because both sides are getting increasingly polarised.” As the sun sinks, I see a shimmer on the horizon, it is the sun shining its light on the Mediterranean, which is not that far away as the crow flies, but sadly it is the closest that most young Palestinians have ever been to it. 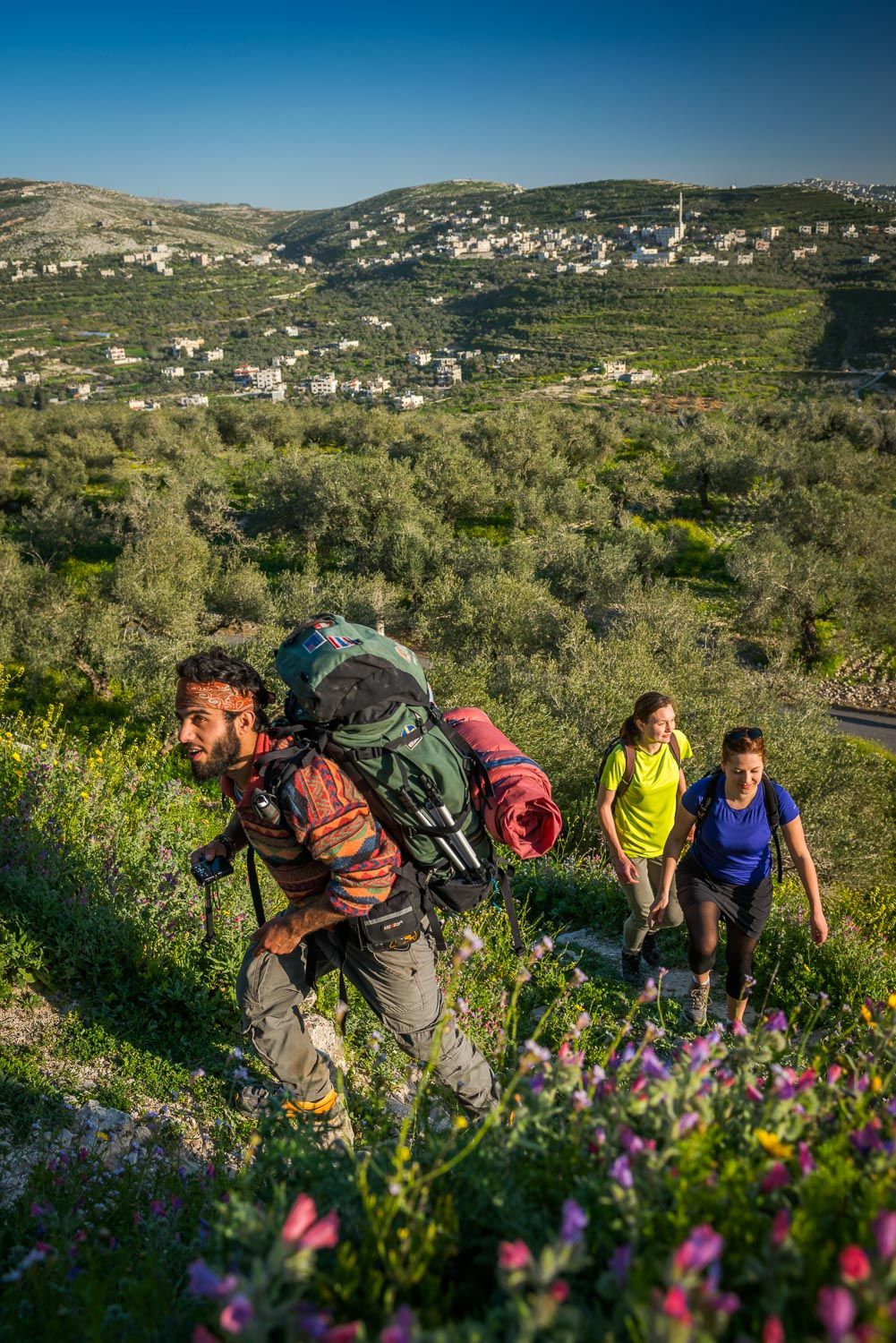 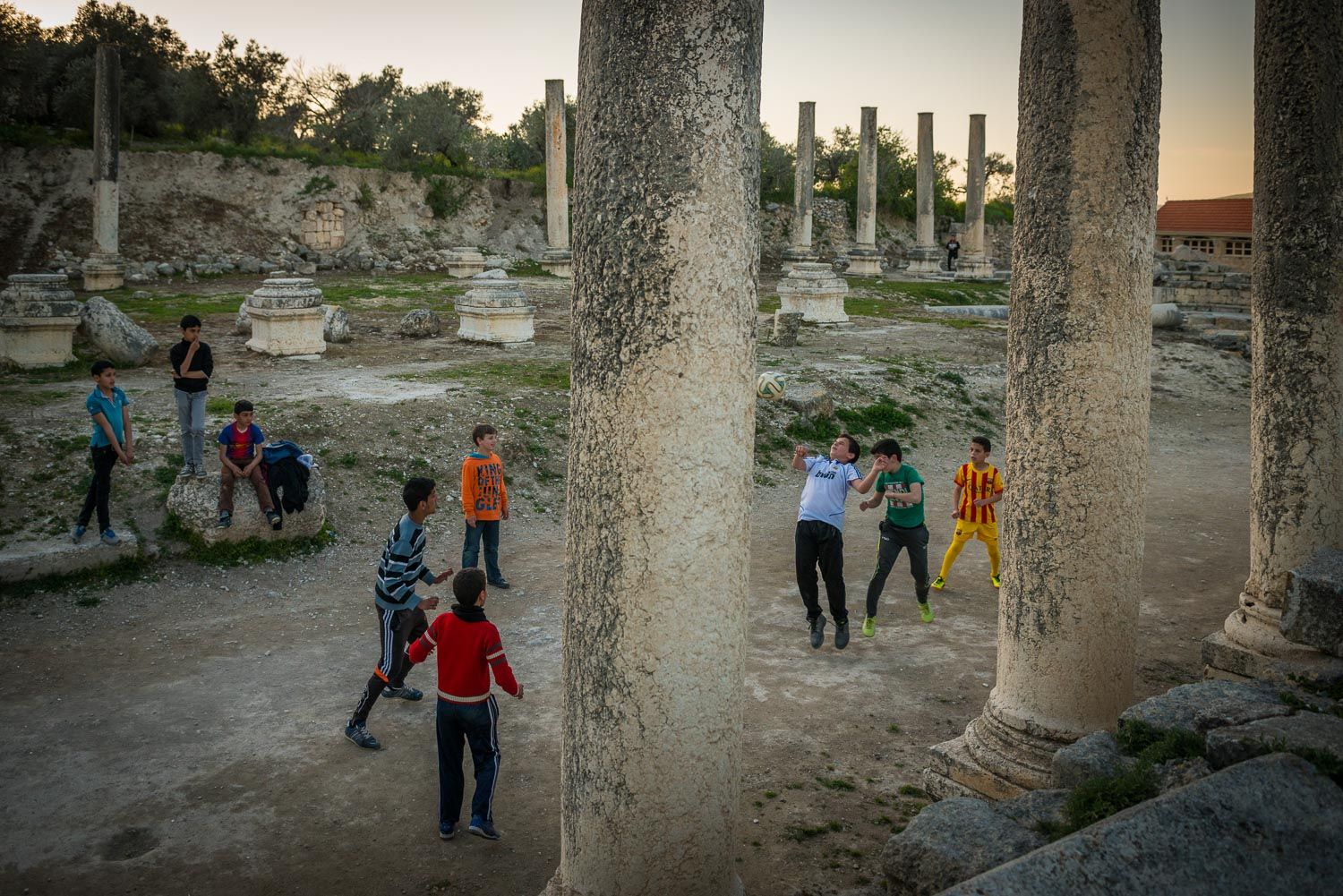 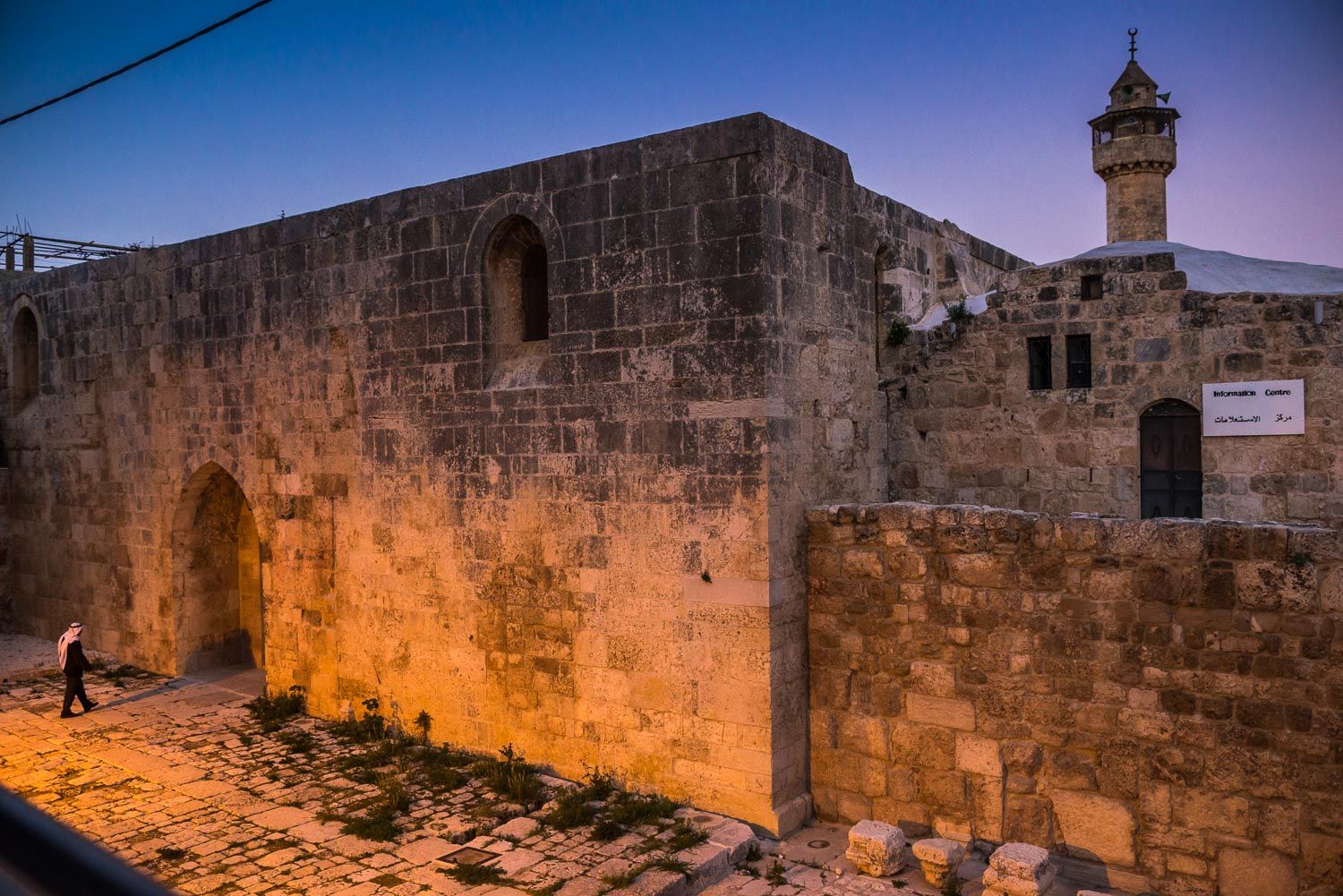 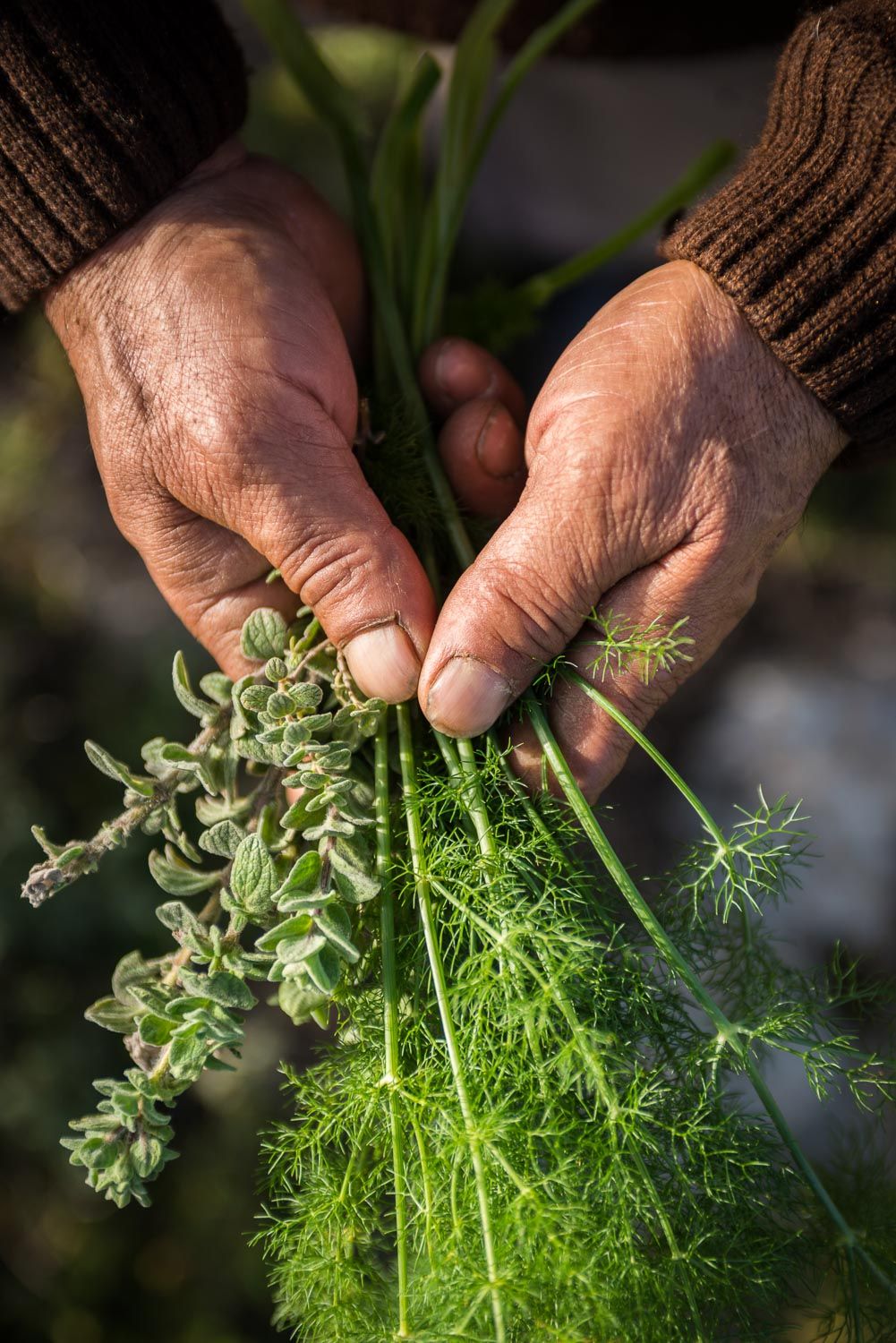 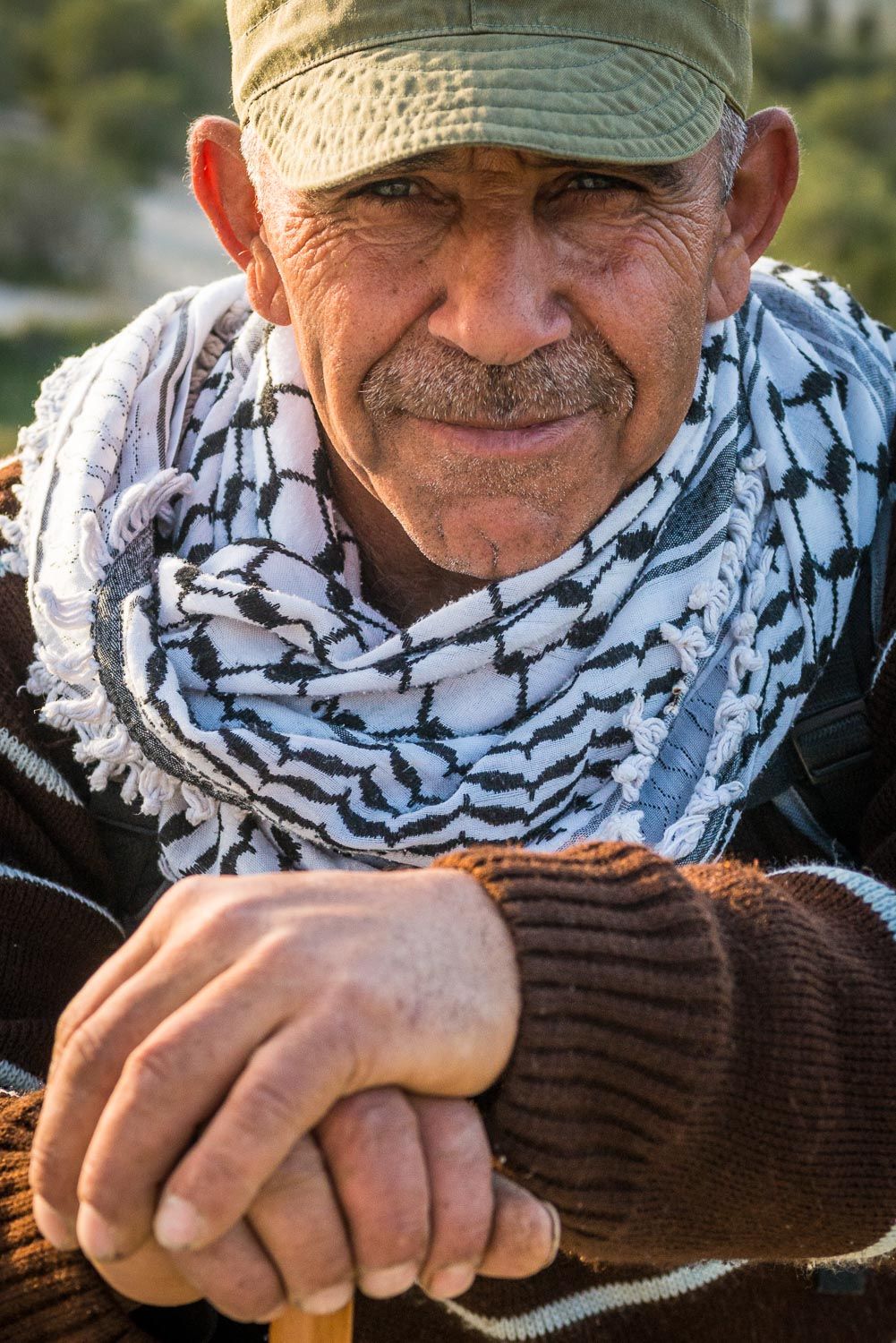 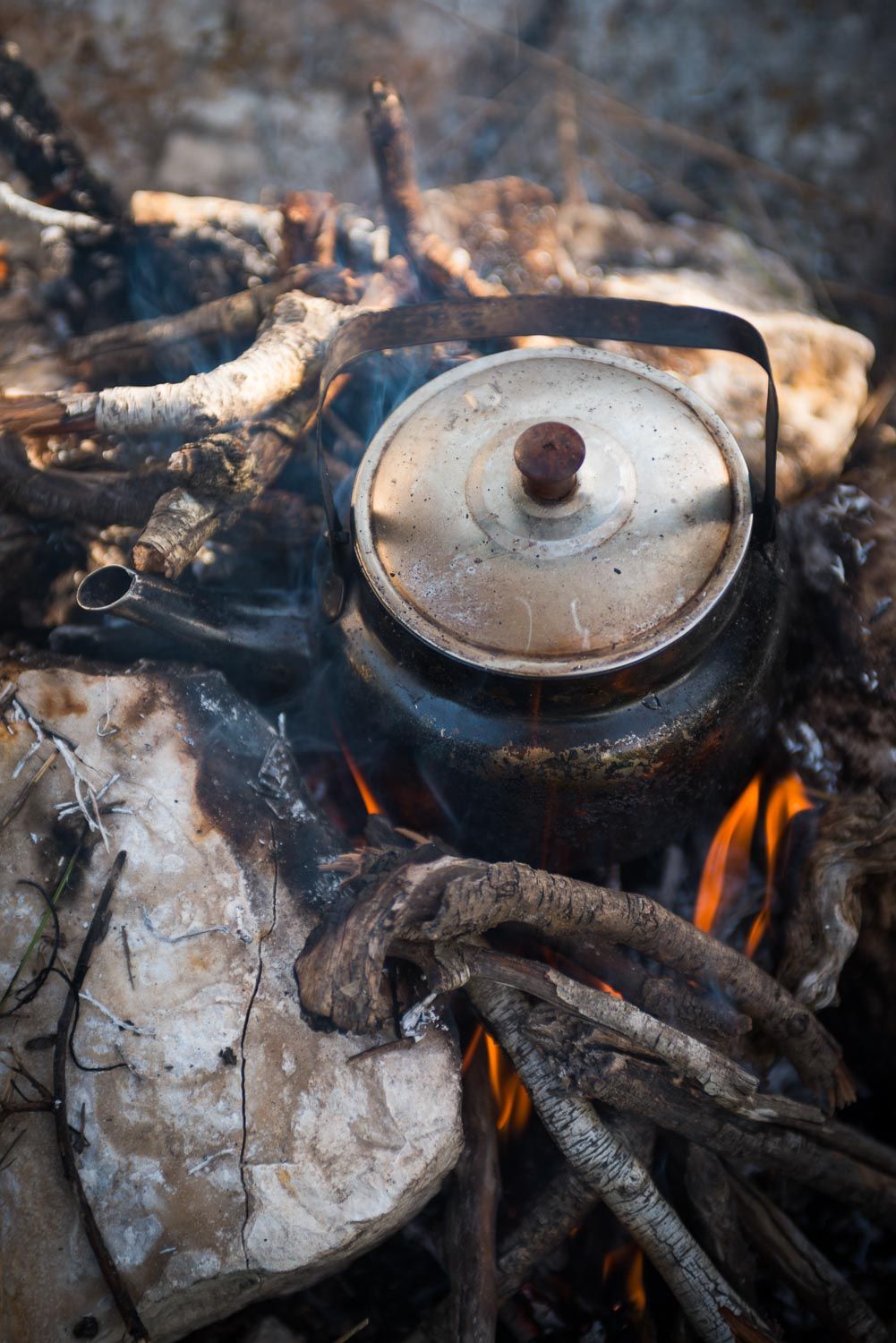 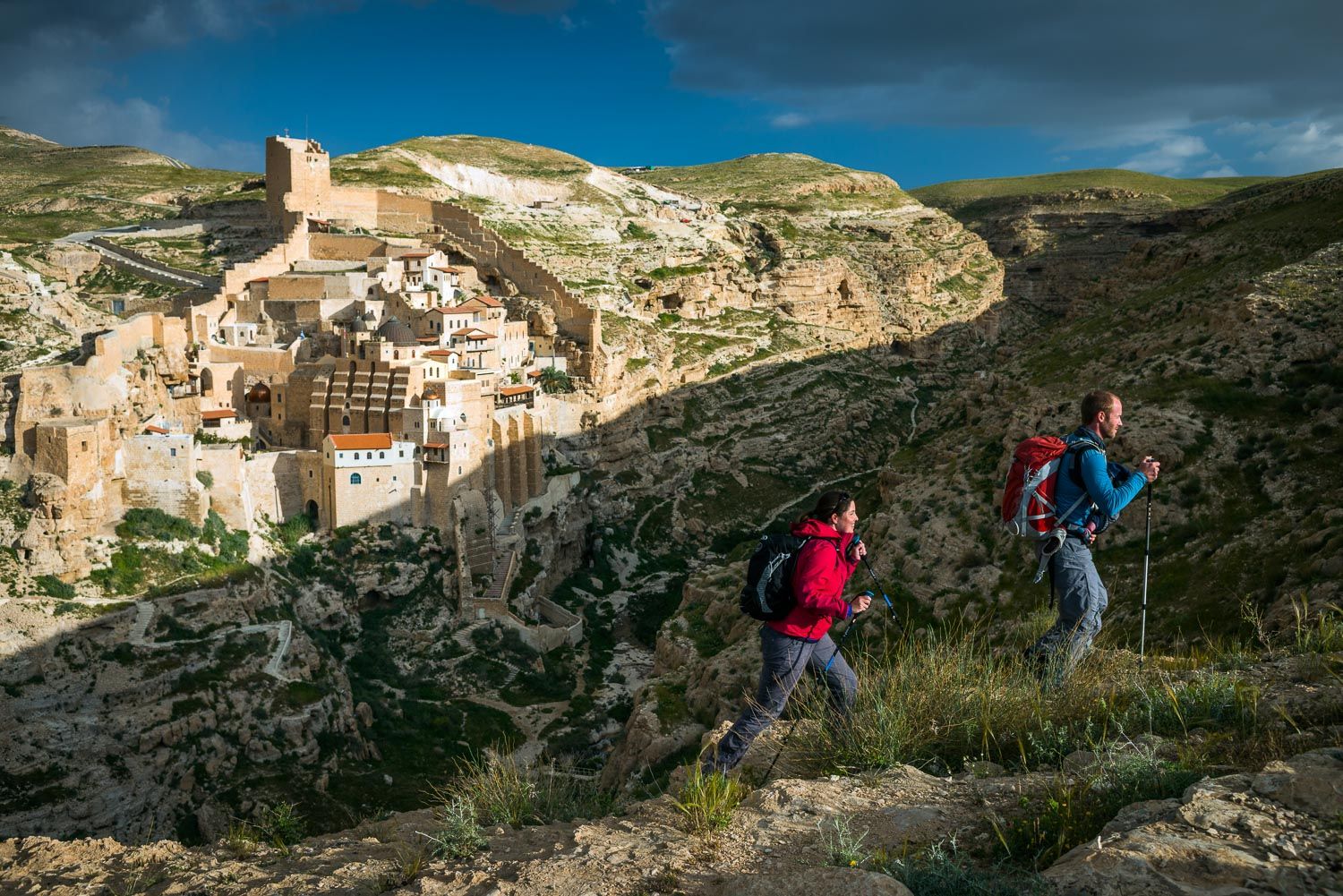 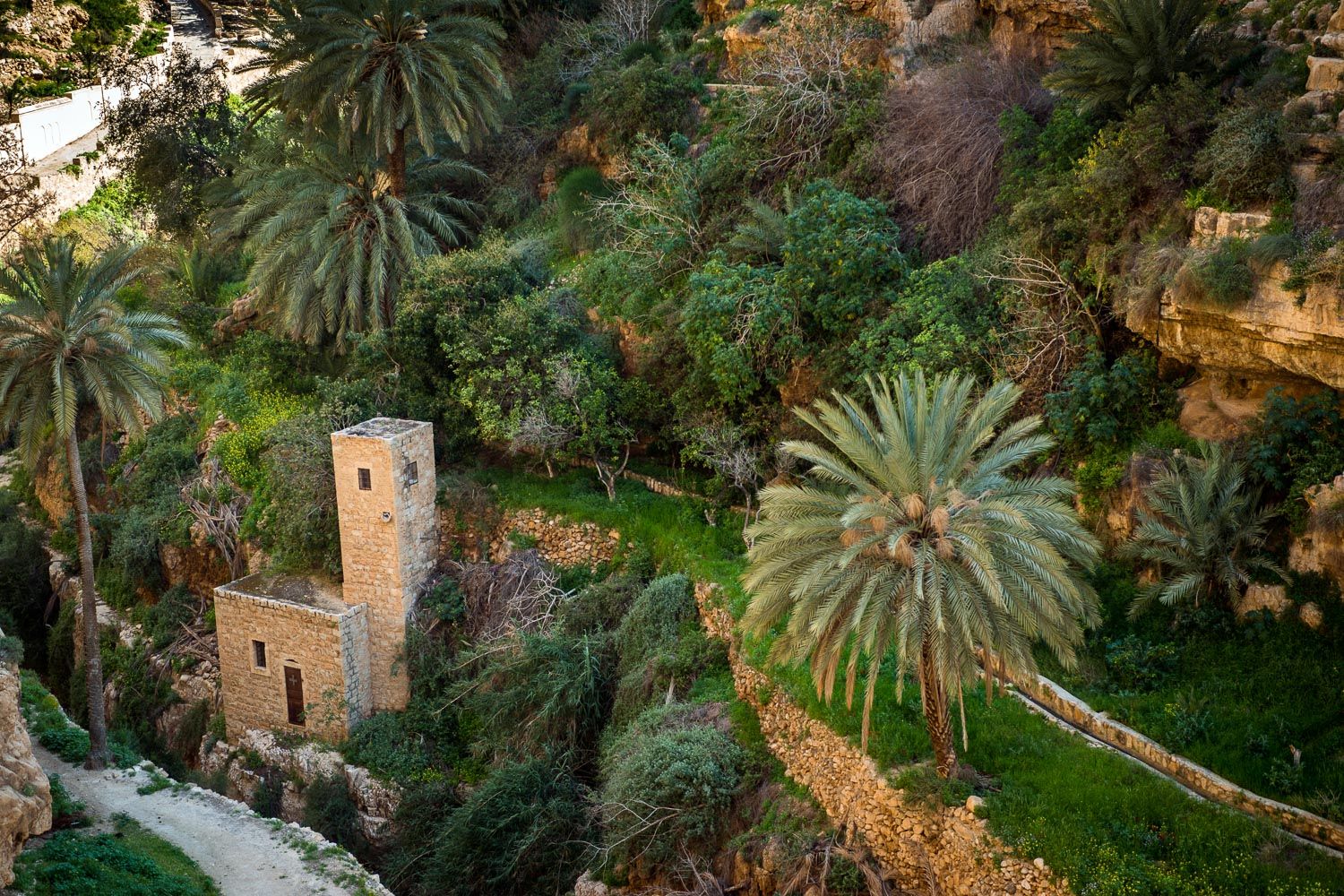 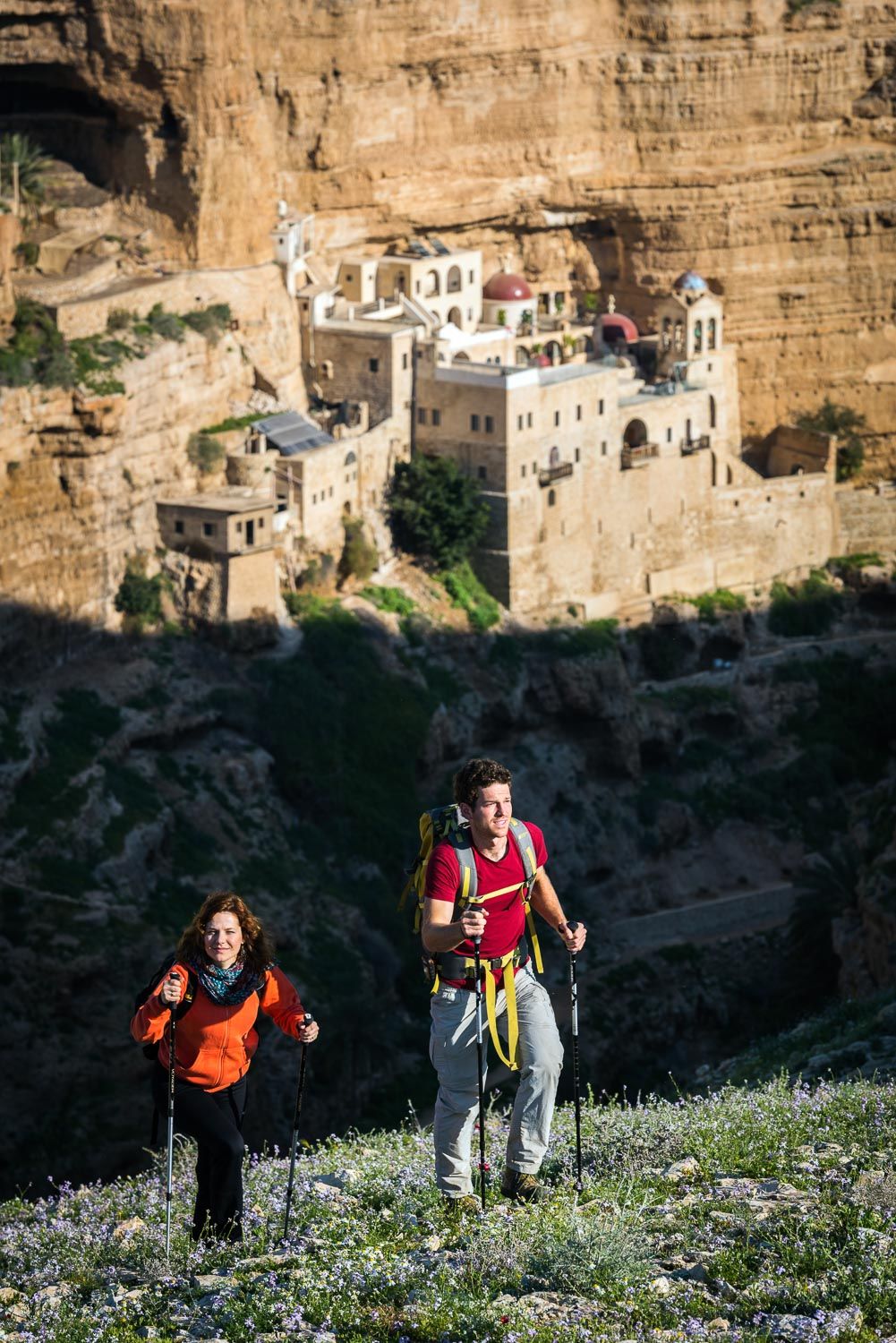 INTO THE ARID DESERT
One of the most spectacular hikes in the Nablus area leads through Wadi Auja, descending towards the desert and the Jordan river, which marks the border with Jordan. The otherwise barren rocky landscape is green with an abundance of wild flowers this time of the year. As we proceed, the valley becomes narrow with steep walls on both sides where the bedrock has been cut out by thousands of years of water. By the time we reach the desert, we are close to Jericho. At Tel al-Sultan excavations show layer upon layer of Jericho’s ancient remains starting with the Neolithic period 10,000 years ago. It is blistering hot in the desert and we are desperate to find shade.

Though I walk through the valley of the shadow of death, I will fear no evil

The rocky canyon of Wadi Qelt is often associated with the “valley of the shadow of death” from Psalm 23, and in the heat of summer the moniker seems to suit just fine. In this isolated, barren and rocky spot the 4th-century monastery of St George clings to the rock face. Today, the monastery is unique in its acceptance of female visitors, a precedent set by a Byzantine noblewoman on a monastic tour who claimed that the mother of God had directed her there for healing from her incurable illness. The monastery lies on the ancient route to the holy city of Jerusalem. The coolness of the valley is invigorating as we slowly climb up the steps towards the aquaduct that channels the water to the monastery. The elaborate water system runs for many kilometers to the source of the spring, where the Masar Ibrahim leaves the Wadi and tracks back to the Tomb of Moses at Nebi Musa in the desert, from where it connects to Mar Saba.

Mar Saba is among the most ancient and wondrous desert monasteries in the ‘Holy Land’. The monastery has been continuously in service since its founding in the fifth century. The structure has survived natural disasters, pillaging armies and the currents of numerous empires and kingdoms. The large jagged wall around it was originally built after the 7th-century Persian invasion and has kept out intruders ever since. That includes women who have been generally barred from entering Mar Saba’s gates since its beginning. Standing on the opposite side of the wadi, in the early hours of the morning, we take in the splendour of this ancient beauty. 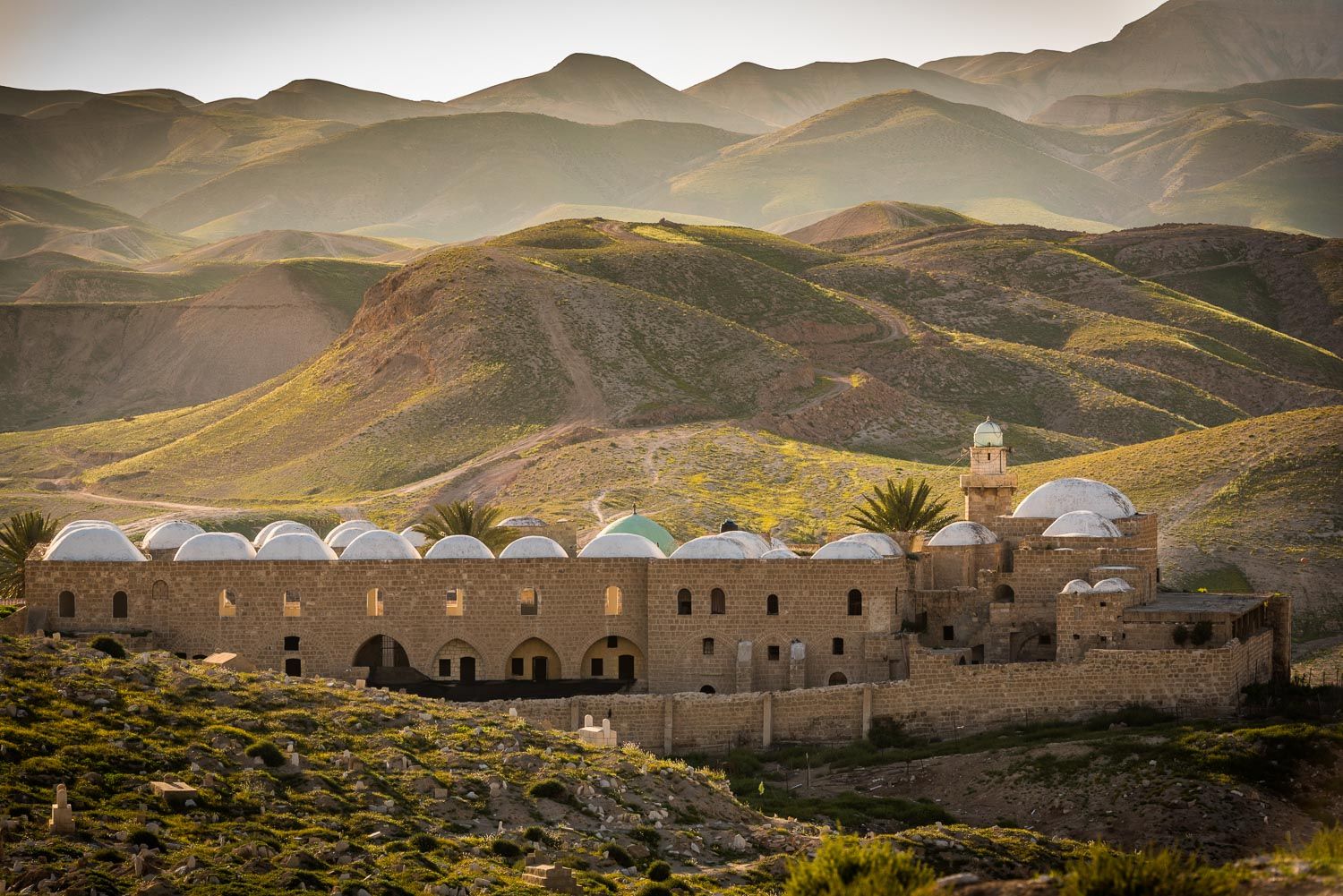 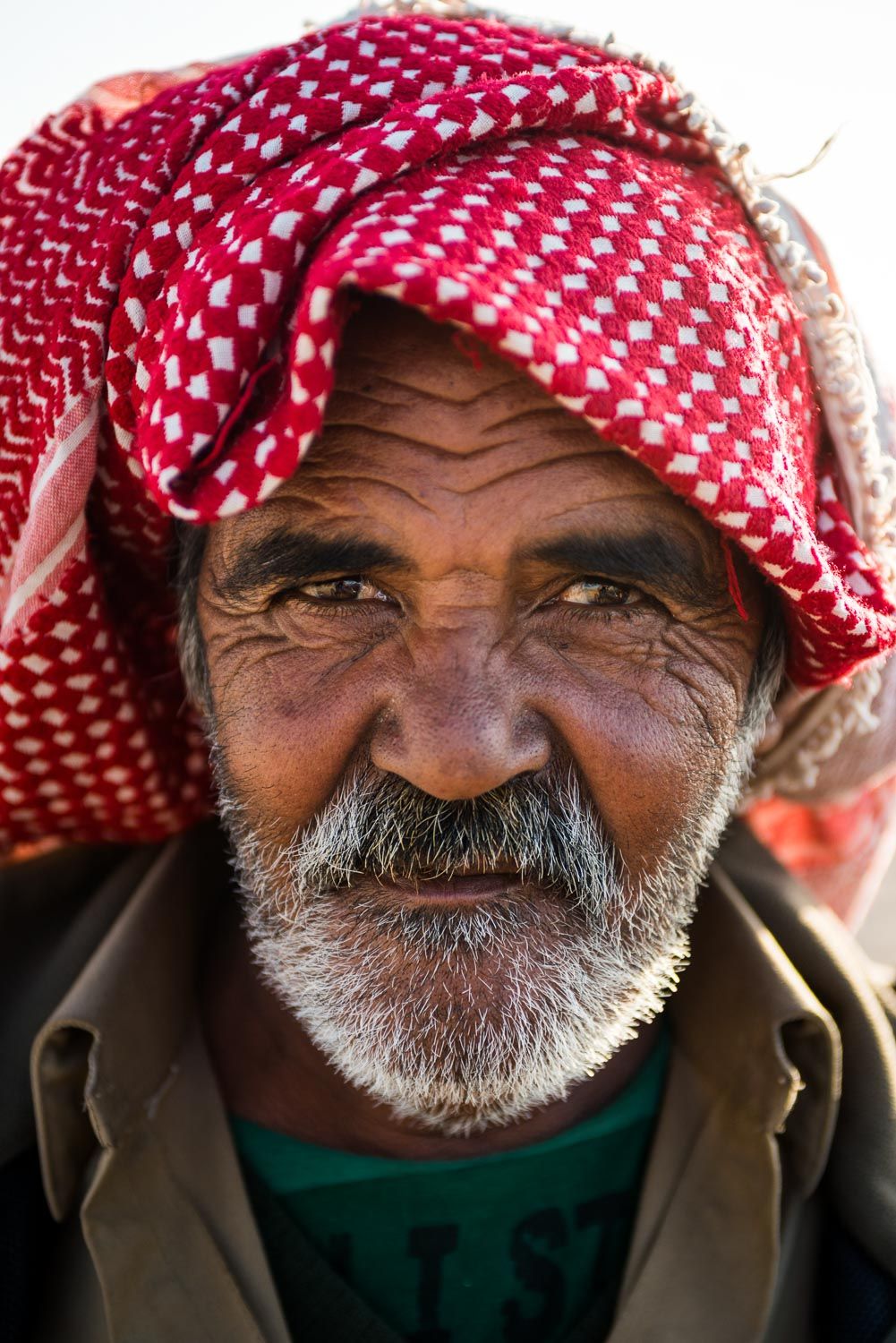 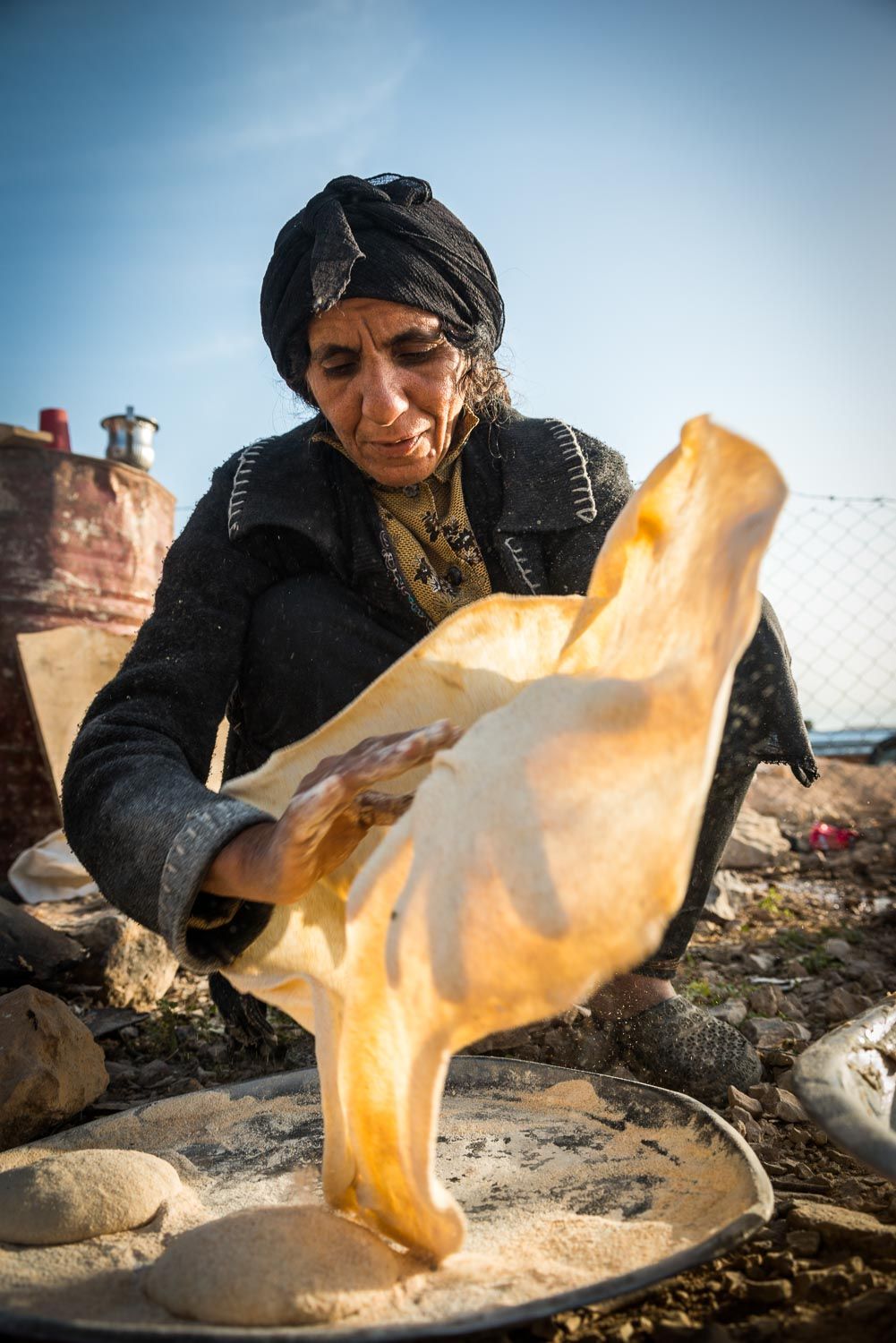 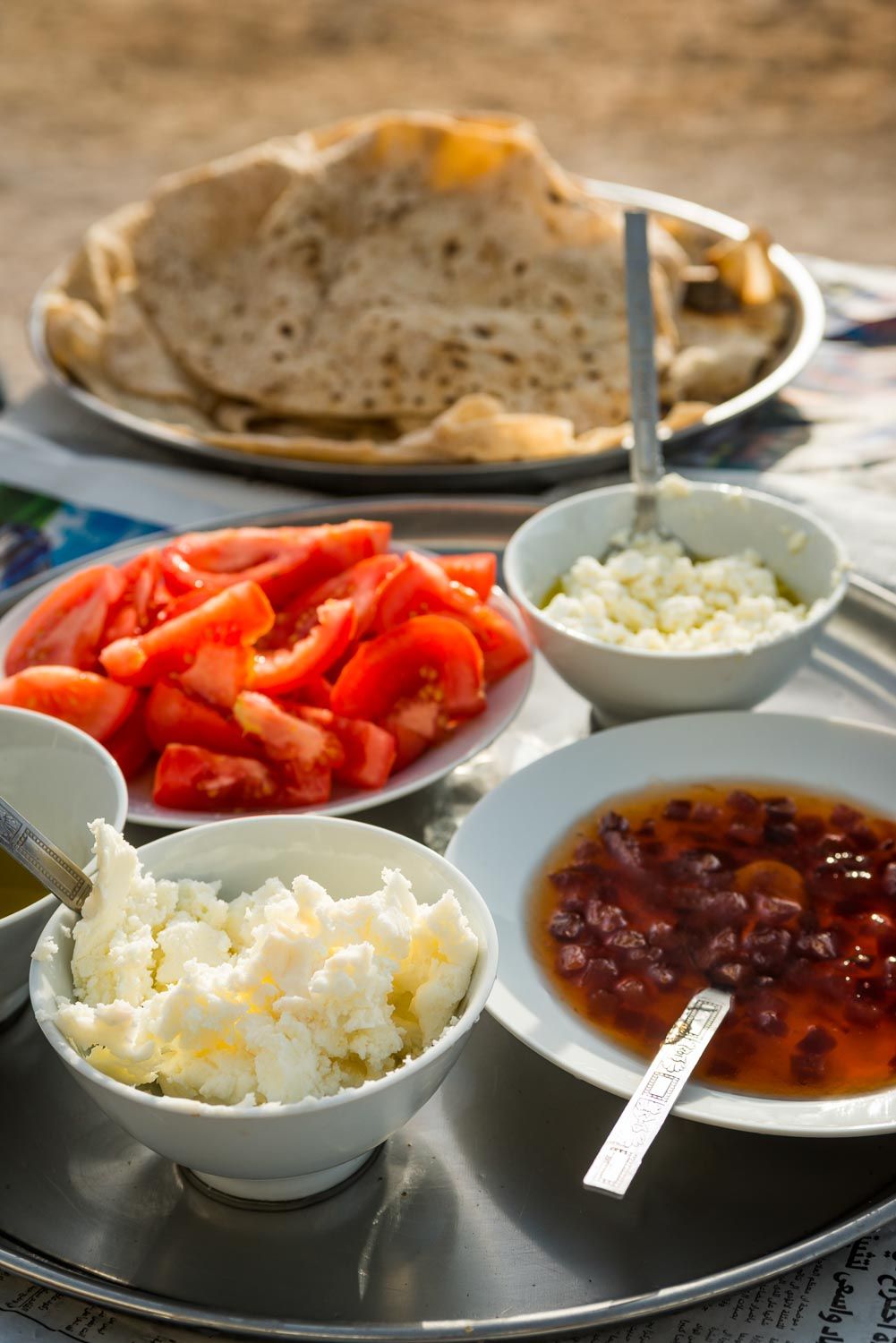 LIVING WITH THE BEDOUINS
Further to the south in the desert lies the Bedouin camp of Reshayda. Abu Ismail and his family give us a warm welcome with sweet hot tea, they are our host for the night. For the Palestinian Heritage Trail he has created a separate space where hikers can stay overnight. As the sun is setting, Ismail rounds up the camels, while a dust cloud announces the approaching herd of sheep guided by another son.

Gazing at the stars from my bed, I think of the beauty of the region and it’s people and can only hope that one day they will live at peace with their neighbours

His wife is rolling dough balls into thin pancakes and bakes them into flat bread on a round plate over the fire. She makes it look easy, but soon one of the hikers finds out that it’s more difficult then she lets on. The same counts for milking the sheep. The family works like a well oiled machine and soon the milk is collected and ready to be processed into yoghurt and cheese. Add to that some tomato and olives and you have tomorrow’s breakfast. After sunset, the desert cools quickly as the milky way appears overhead. Thousands of stars so bright, that I can almost touch them. Gazing at the stars from my bed, I think of the beauty of the region and it’s people and can only hope that one day they will live at peace with their neighbours. 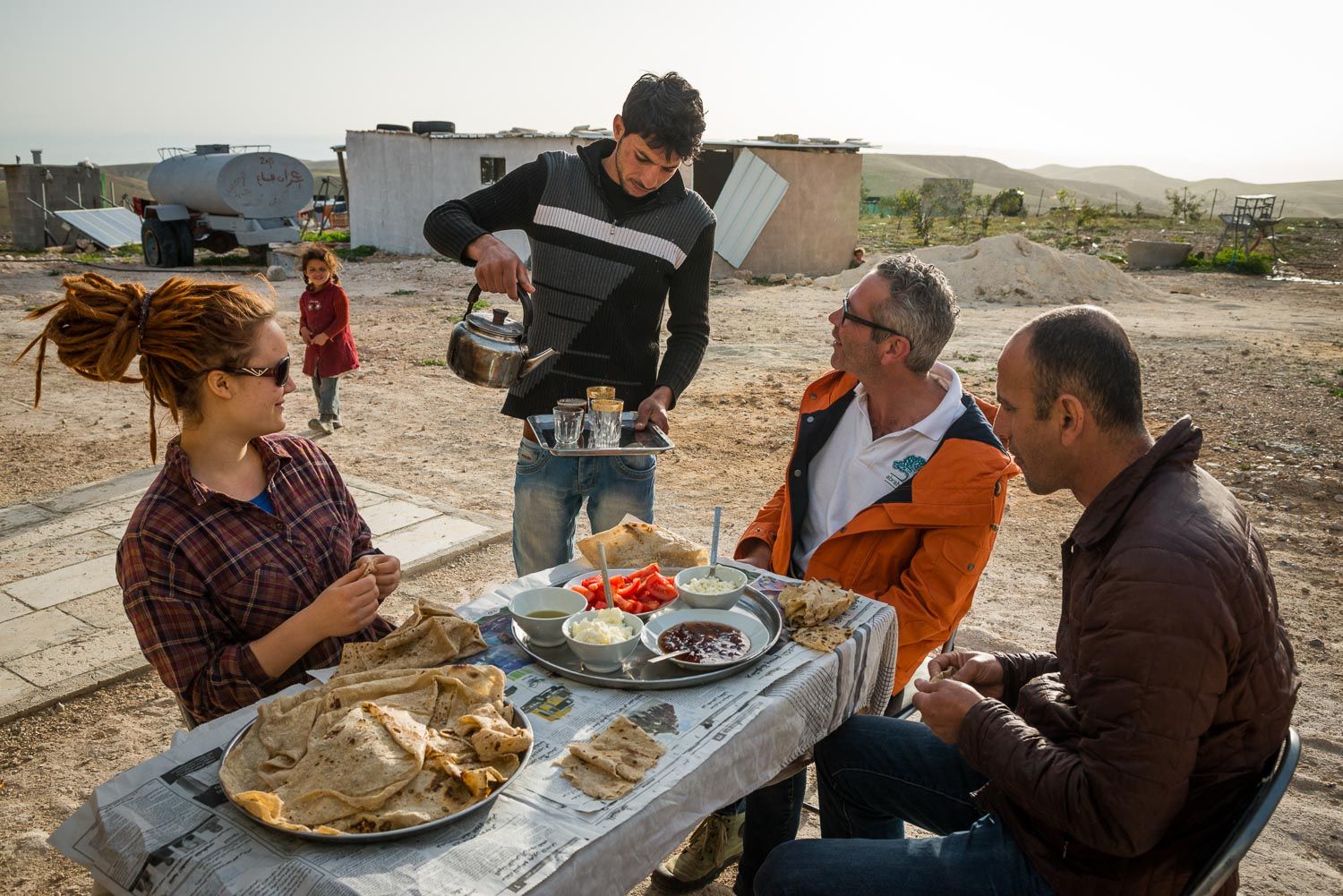 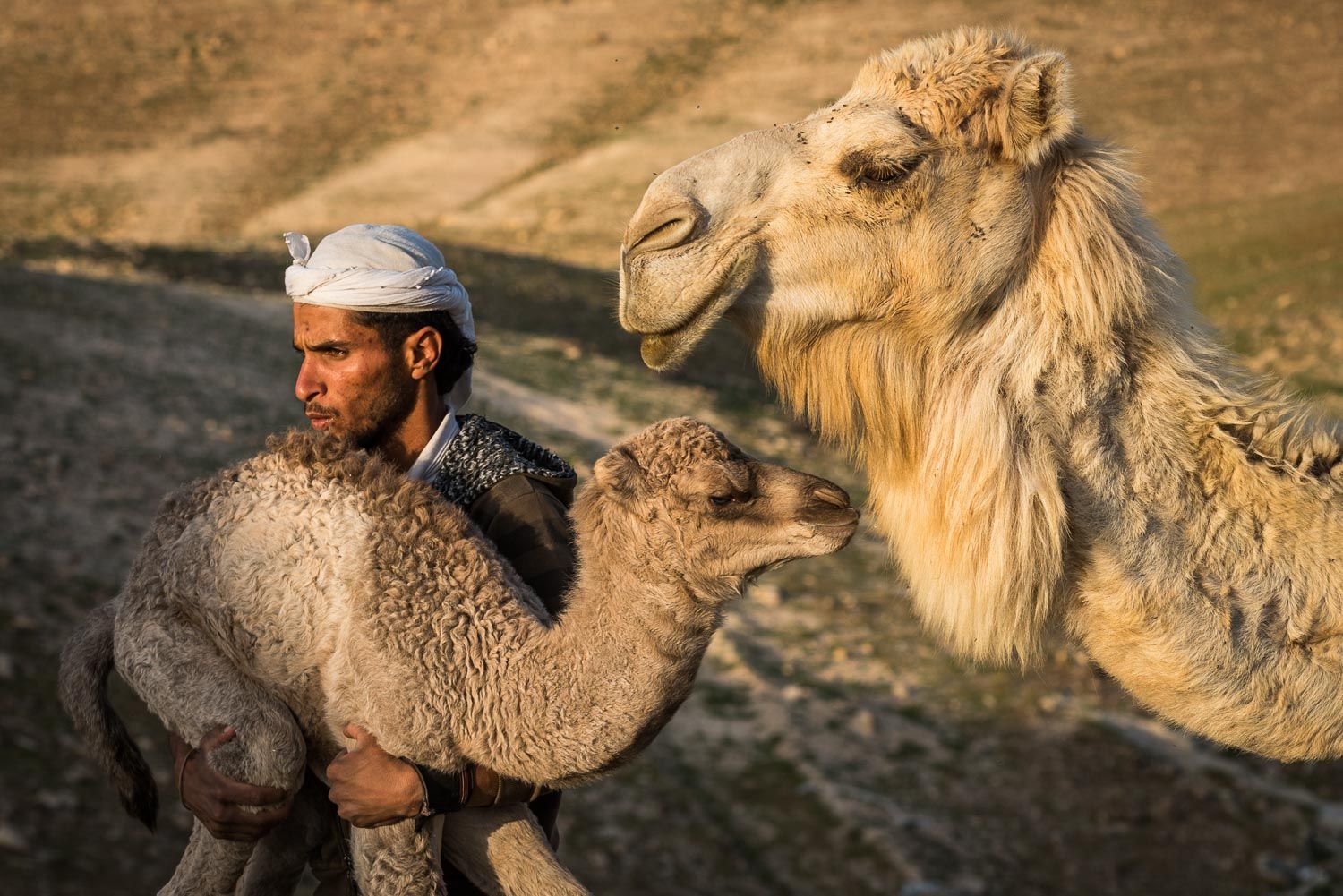 Set your footsteps in the ‘Holy Land’

The Palestinian Heritage Trail is a rare opportunity to submerge yourself in the remarkable landscape, hospitable people and ancient historical sites of Palestine. The trail provides you with the unique opportunity to be welcomed into ordinary Palestinian homes; to share a homemade traditional meal, listen to local tales; to learn about daily lives, loves and hopes of the people. Palestine is an extraordinary land. Take the first steps onto the trail, and you’ll most likely be rewarded with a life-enhancing experience.