On their way to the far north in Europe, people often forget about the south. Go to Skåne, the bustling southernmost province of Sweden, and take a road trip through its hidden jewels. Don’t forget your fika!

Our road trip through Sweden begins in Denmark. This might sound odd, but flying to Copenhagen is the most convenient option when you are travelling to Skåne, Sweden’s most southerly province.

After a 15-minute drive over the 16-kilometre-long Øresund bridge, we are in Malmö. We soon leave the city behind, and we drive through a landscape in which the lines are slightly sloping. Fields of wheat, lavender, sunflowers. Now and then, white churches appear in the distance. In the sky a black kite and a group of cranes along the waterfront. Trees in blossom. Rowanberries. Here in Sweden, they say the harsher the winter, the larger the berries, but right now we are a long way from winter. It is beautiful late summer weather, without a cloud in the sky. The talking of my friends fades into the background: “Are you going South? That’s not the real Sweden.”

Skåne is my maiden voyage to Sweden. I have never been to the land of the northern lights. I know that in the far south of the country I will never see reindeer crossing the road. Some wild boar perhaps, given the warning signs all along the way, but for now the coast is clear as we drive into Ystad. 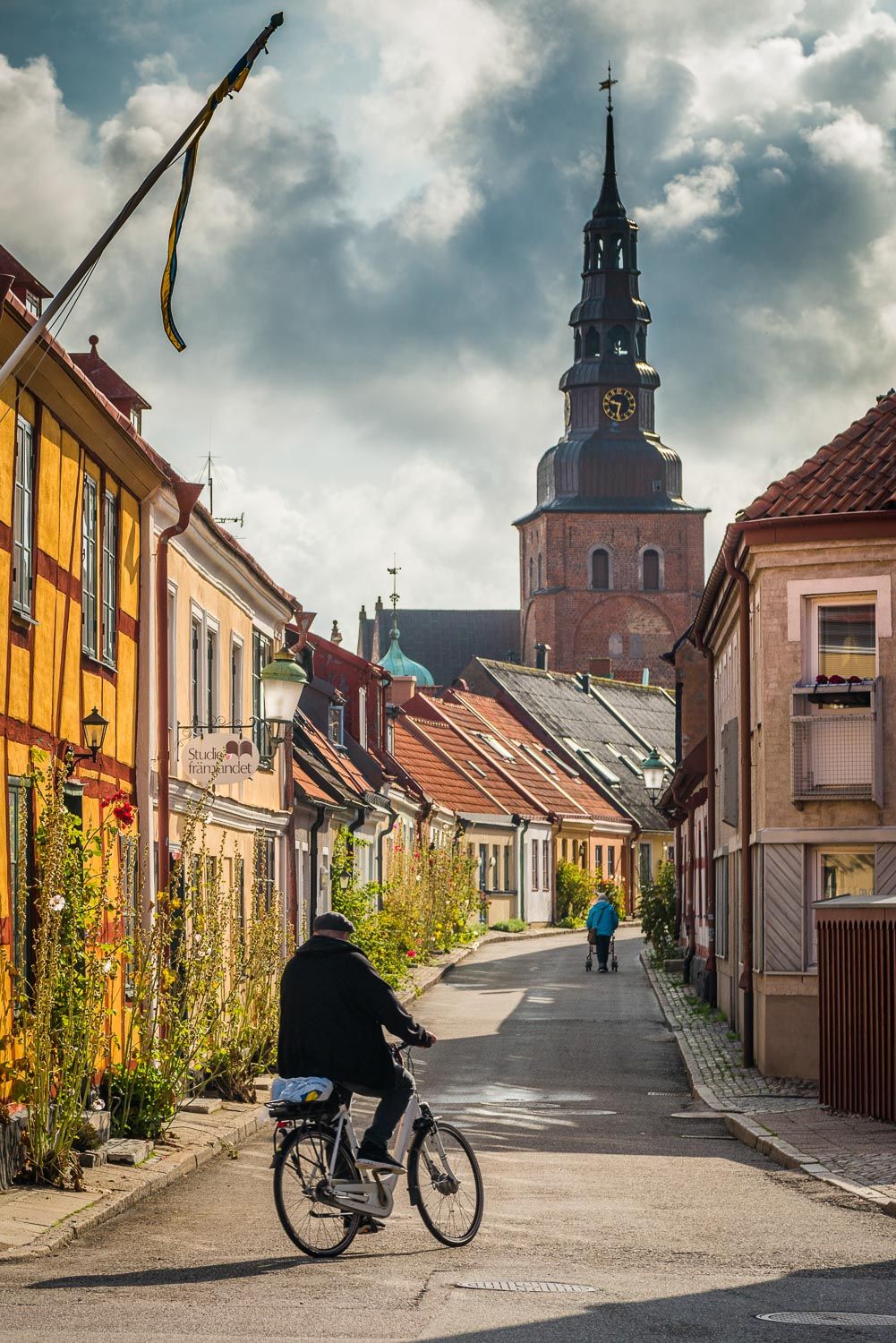 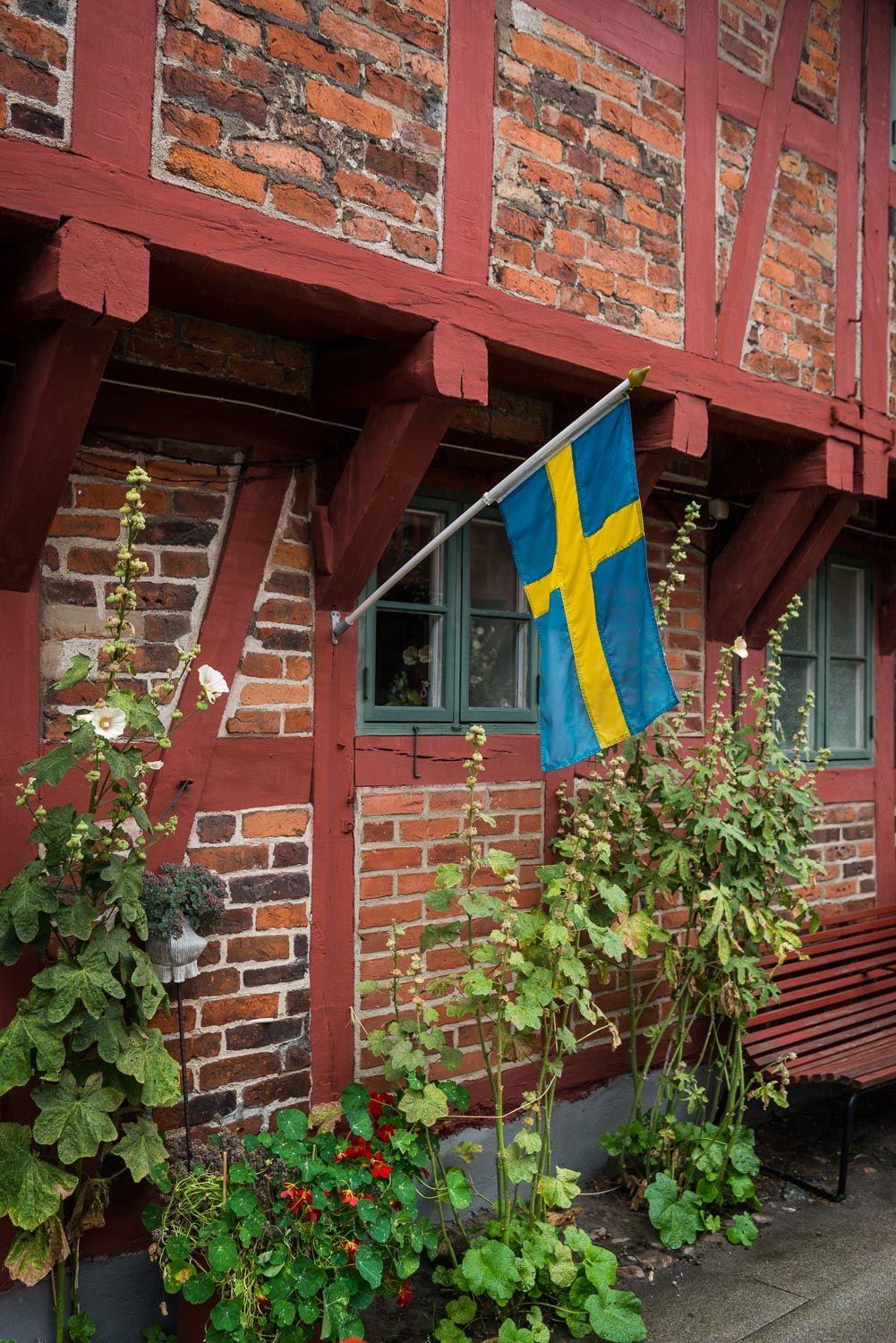 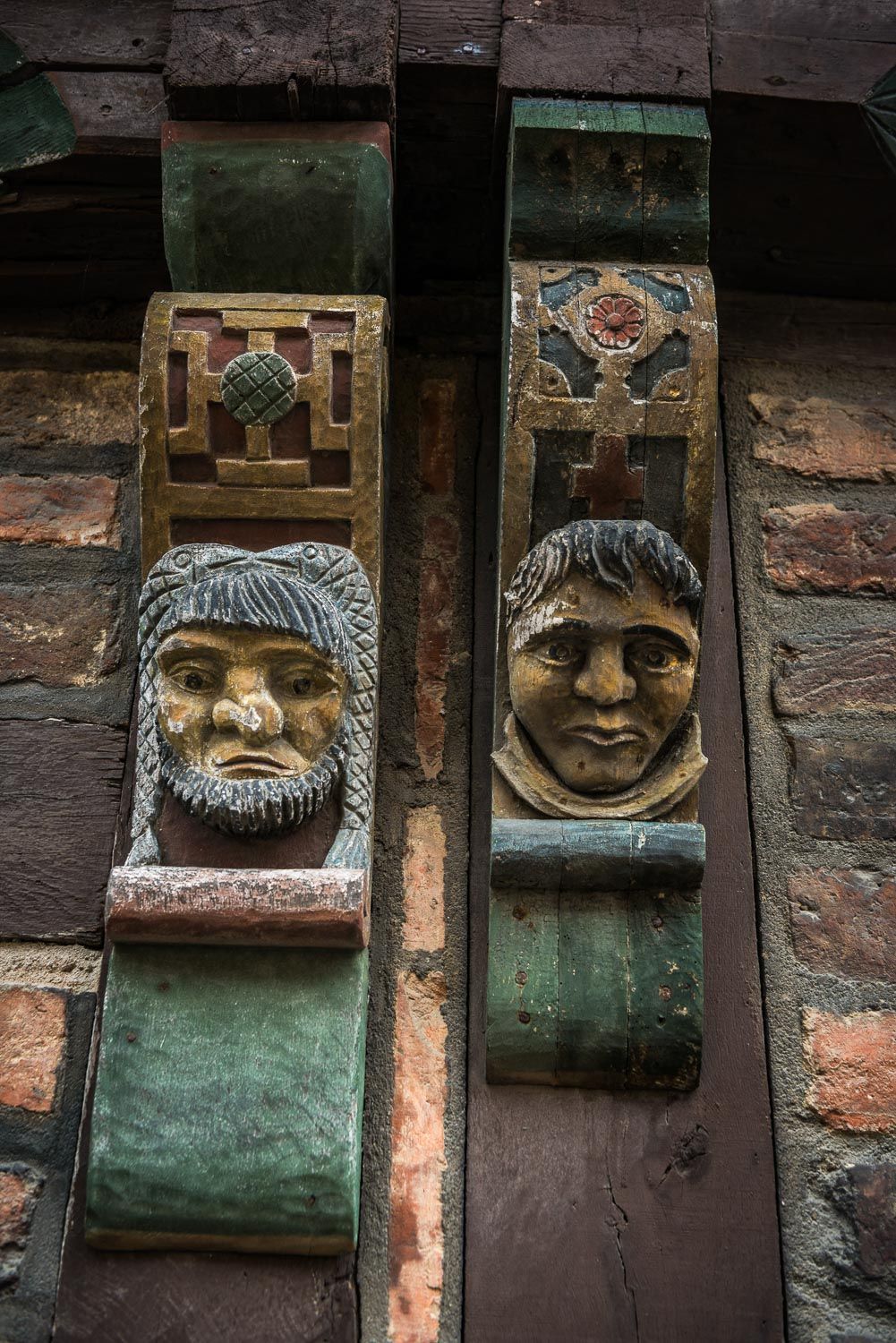 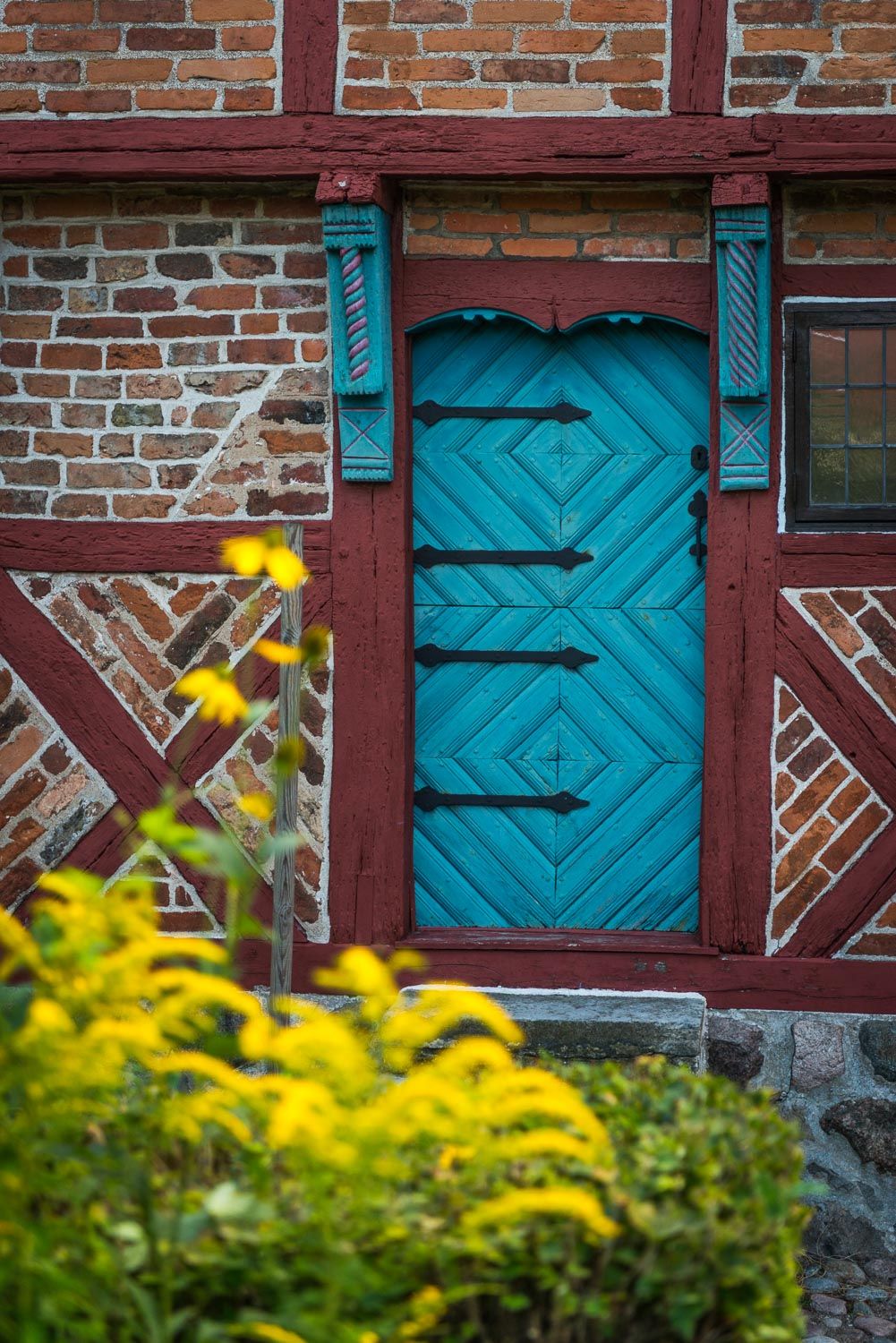 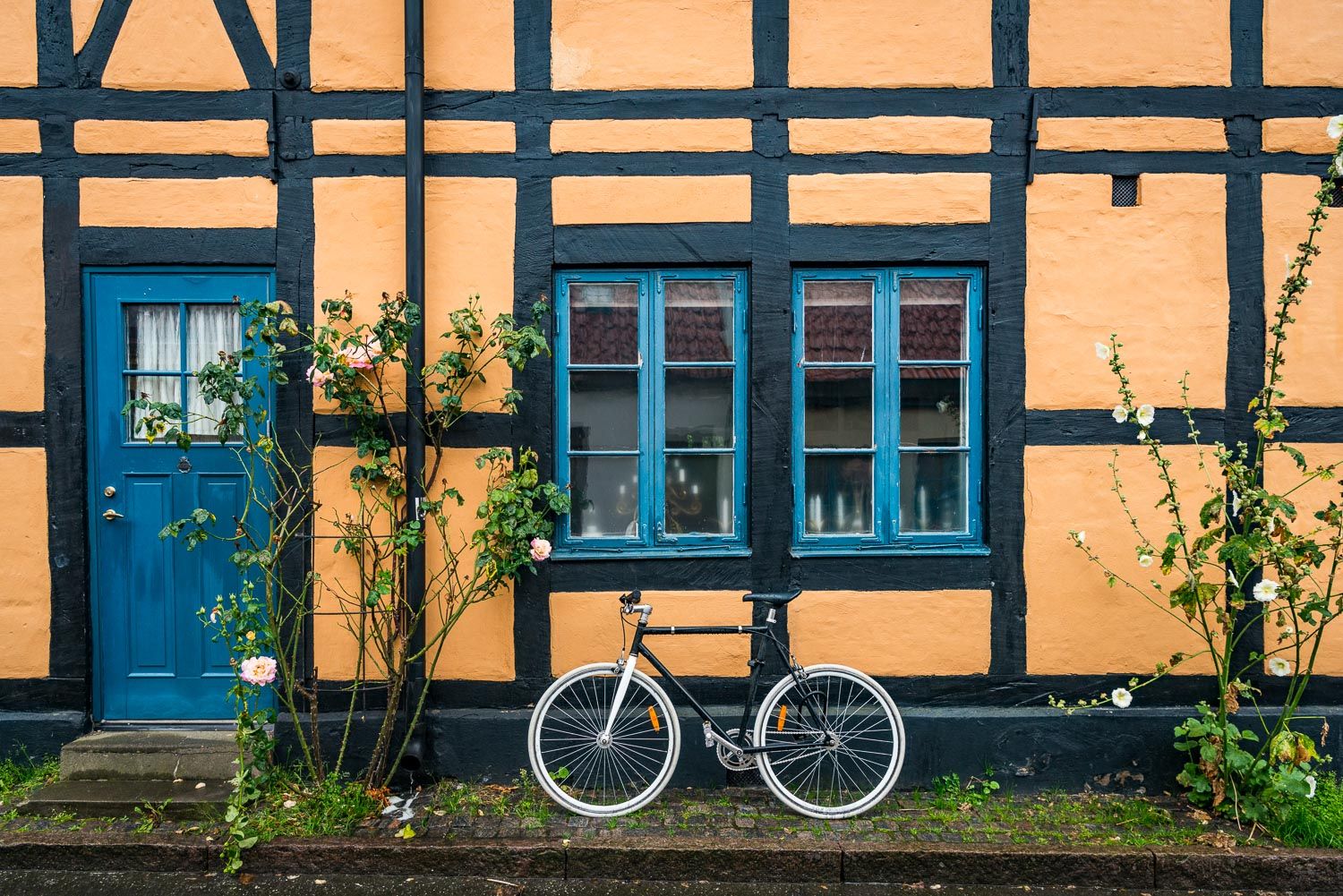 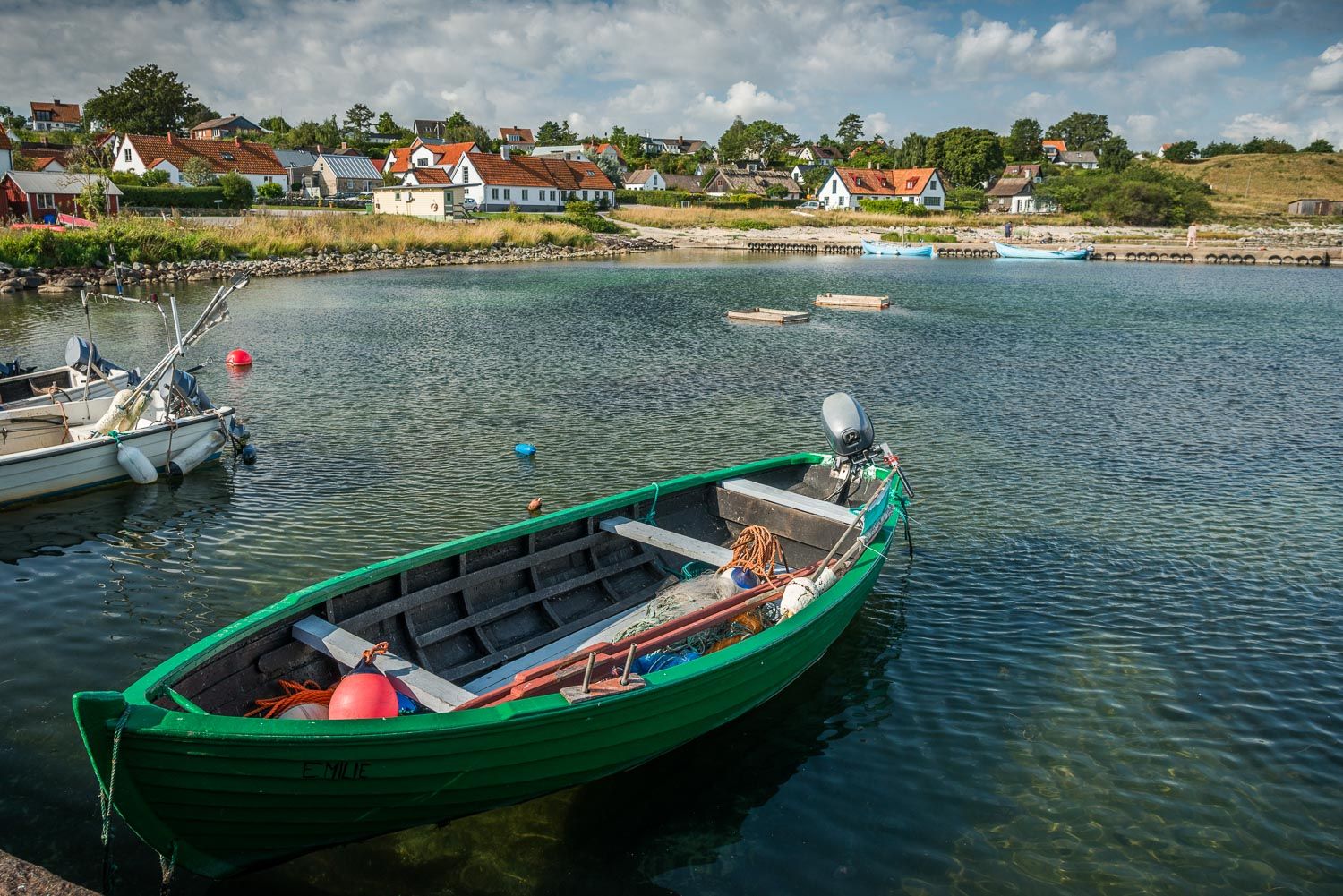 Nordic Noir
I don’t have to tell the fans anything: Ystad is the city of Wallander, the TV show based on Henning Mankell’s novels about police detective Kurt Wallander, who lives in this port city. Due to the presence of a film studio, Ystad can call itself the Hollywood of Scandinavia. For fans of Nordic Noir, you can take on a Wallander Crime Tour of Ystad. Drink a coffee at Fridolfs Konditori, the favourite spot/place of the Swedish Sherlock Holmes, or like us, book a hotel room in the old station building of the city, which played the part of the police station in the series.

Tower guard
With its cheerful yellow houses, there is very little about the city Ystad that would associate it with murder and manslaughter. Nonetheless, we are worried due to the tower guard. In Sweden, in the old days, tower guards kept citizens notified of incoming danger, such as fire. Nowadays, they are mostly obsolete. But Ystad is the only town in Sweden that has kept this tradition going. The town guard of Ystad is the 72-year-old volunteer Roland Borg, who climbs the 51-meter-high church tower and cries out every 15 minutes between 21.15 and 1 am. When you hear him honk, everything is OK. Some tourists think it’s a robot, a machine. But no, he really does stand there every night. Except for tonight. No Roland to be seen. I ask a waiter for clarification. He checks his watch and panics. Mr. Borg should be there. This has never happened before. I still think I’m being messed around with, but it’s for real. The waiter, the people in the hotel, everybody is panicking. Soon I’ll have to ask Wallander to take this matter into his hands to find out: What happened to the Tower Watchman of Ystad? 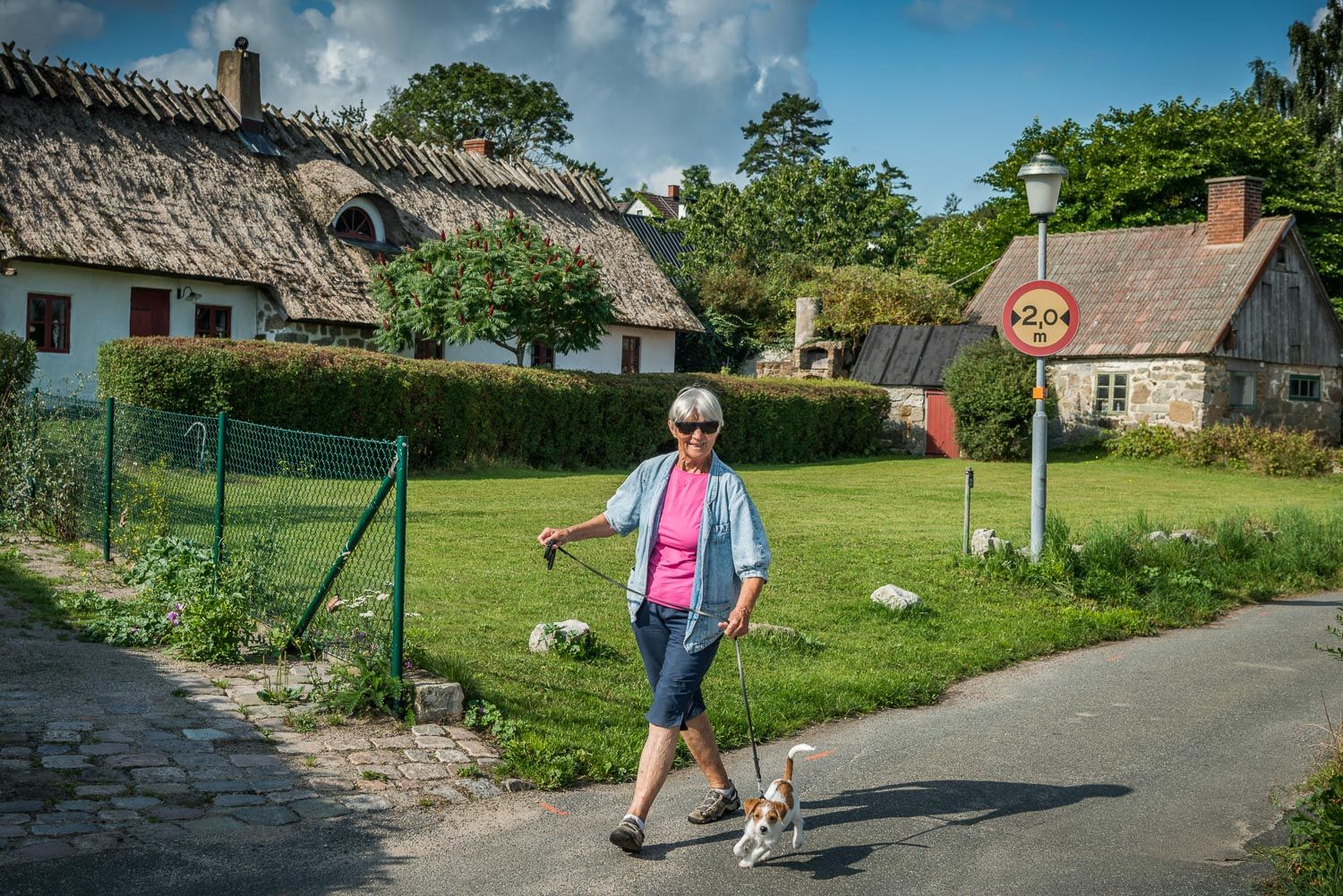 The bath of the priest
Day 2. We are walking through Vik, a small fishermen village to the north of Ystad, where it smells like seaweed and apple blossom. At one time fishers from this region set sail for their trading routes far beyond Europe. Amber from this region has been found as far away as Egypt. At the moment, very little is going on. No stress, it’s Sweden. A man wearing a hat lifts a red kayak off his car. The Baltic Sea, extraordinarily calm today, is waiting patiently. A woman is walking her dog. The pace is slow, right up until a group of youngster’s cycle past and the echo of youth bounces through the air. A dog is startled. One moment later, when I reach the end of the road and walk onto the beach, I bump into them again. They happen to be geology students from Gothenburg. Unbeknownst to me I am standing in a very special place, so I am told; a petrified sand volcano, better known in Vik as ‘the bath of the priest’, because a man of the church once took a bath here in the ‘eye’ of the volcano, or so the story goes. The petrified sand volcano reminds me of flowers made from sliced tomatoes, the ones you find at a Chinese buffet. A rose made of stone.

Very little is going on in Vik. A woman is walking her dog. It’s going at a slow pace.

Hidden Jewels
During our road trip through Skåne, we encounter more hidden gems like this, places that know how to hide from the crowds. There are no signs directing people towards the sand volcano. The beach at Knäbäckshusen is also like this. It’s as if we’re in Thailand. No one to be seen, as well as the fishing cottage belonging to brother Mats and Max near Åhus, two eel fishermen full of compelling stories. A real gem. Ales Stenar, the Stonehenge of Sweden on the other cannot possibly be called a hidden gem: too big. Come early when you visit Ales Stenar. Set your alarm at 7 am, take a 30-minute drive from Ystad and you’re standing alone at one of the most mysterious places in Sweden. 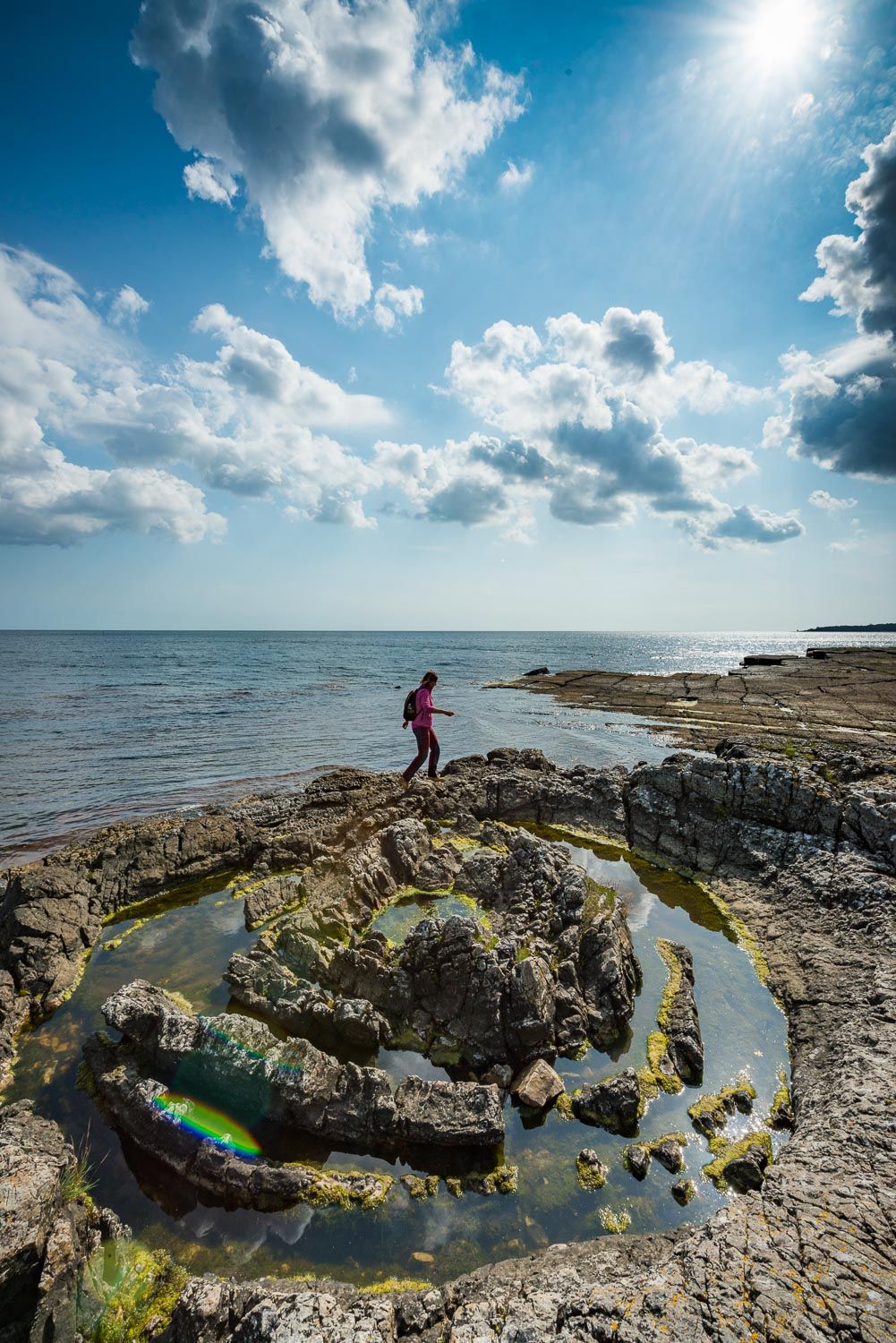 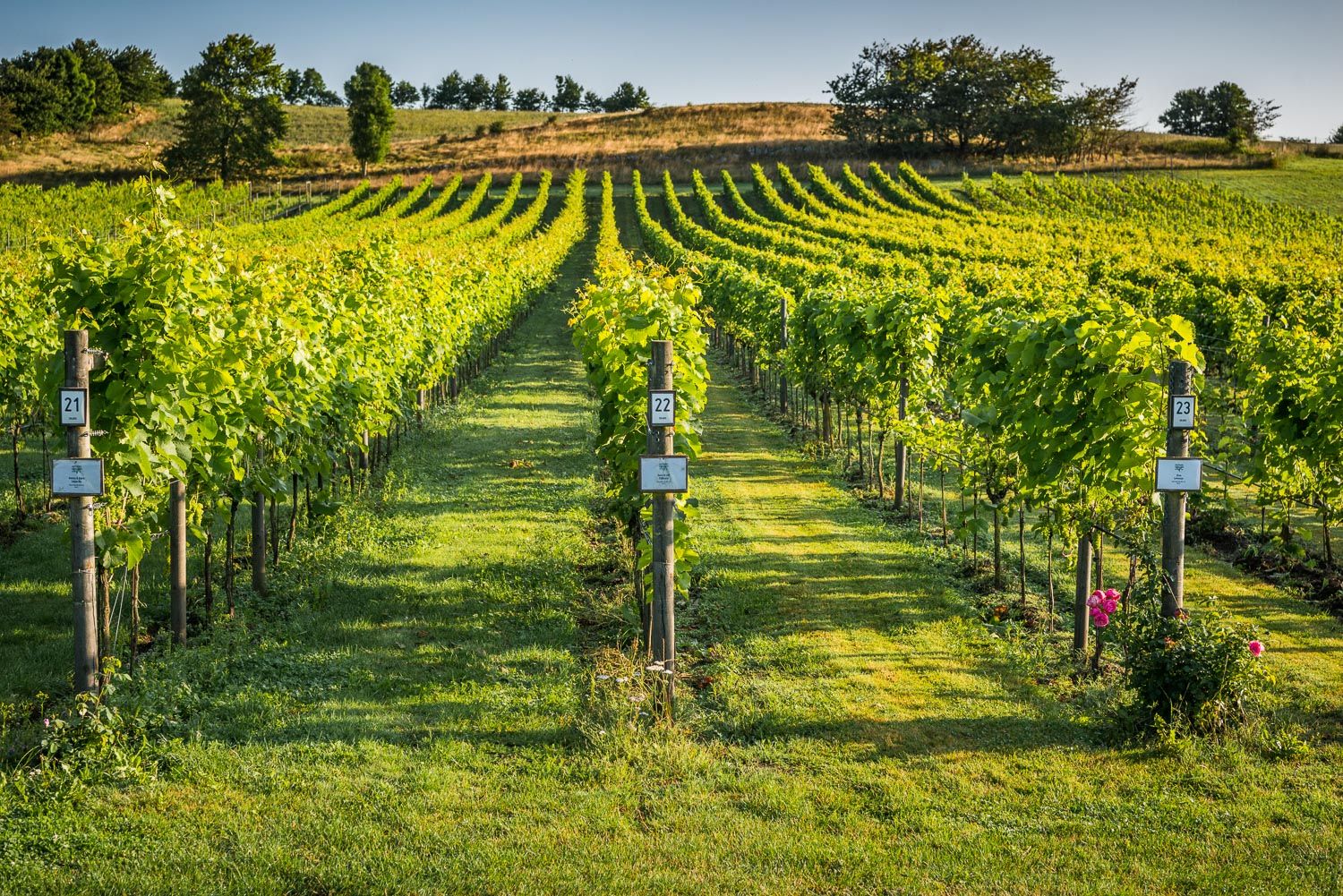 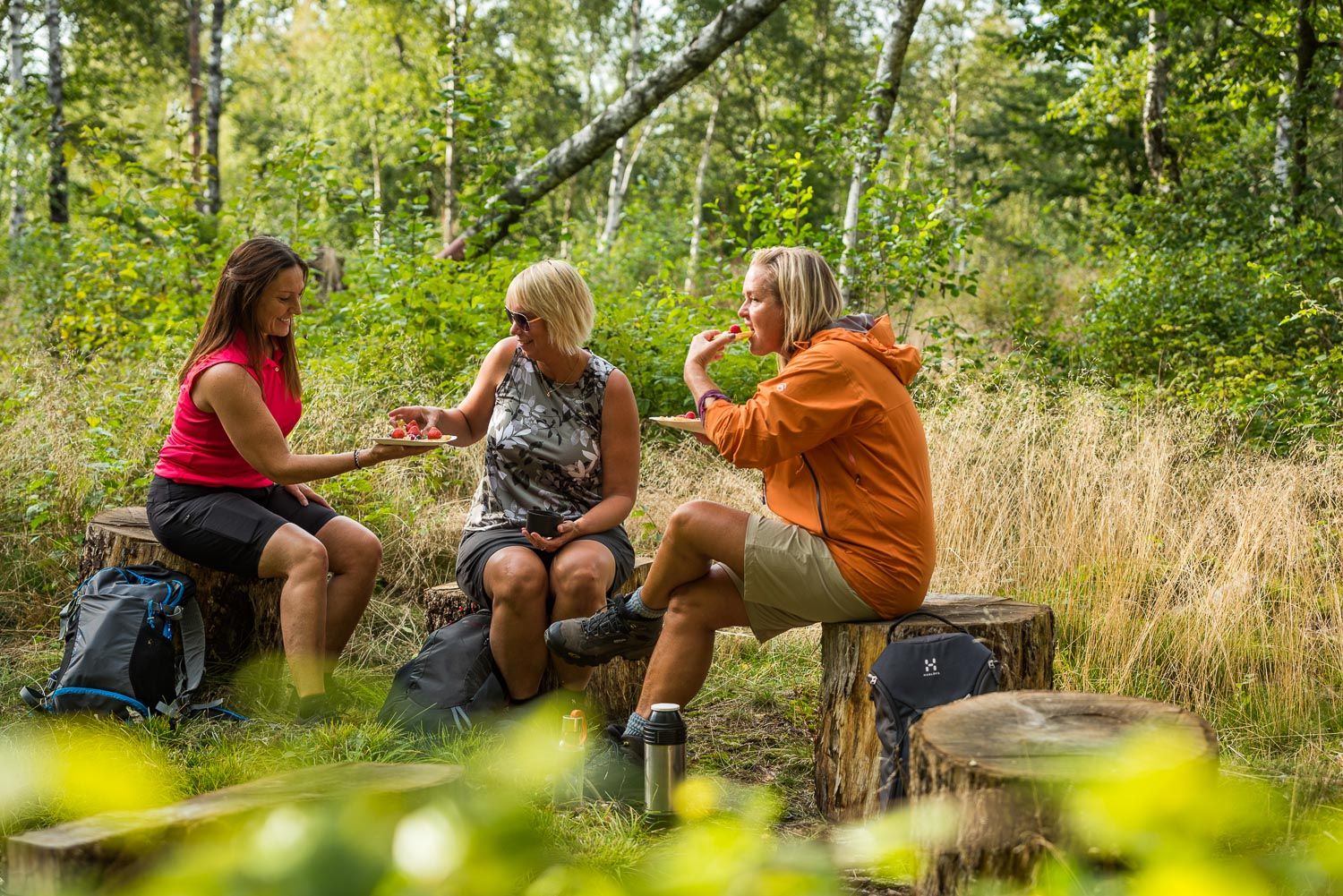 Fika Time
Halfway into our road trip, we make a stop at Allé, an old farmhouse where you can have lunch. Eva Thuresson, the owner, is already waiting for us. Aquavit appears on the table as Eva is serving a herring and egg salad, and herring without aquavit is like a Viking without a beard. What is served before it, is called gubbröra, which literally translates to old man mess. Sounds like you’ll need a glass of aquavit with this, but I can ensure you gubbröra tastes fantastic. We have salmon for our main course and for dessert an early fika. In Sweden, the official fika-time is at three in the afternoon, but you can have it anytime. It means to take some time for yourself, or with friends or colleagues. A little moment of doing nothing at all. A kind of teatime, except with coffee rather than tea. We had our first fika in Ystad, at chef André Svensson’s Grändens Mat: carrot cake topped with fruit. I must confess: the food in Skåne is a finger-licking sensation.

The food in Skåne is a finger-licking sensation. A good part is produced locally and seems to fall directly from the trees onto your plate: apples, blackberries, mulberries

A good part is produced locally and seems to fall directly from the trees onto your plate: apples, blackberries, mulberries. A few tips for the connoisseur. Go eat at Jord&Bord, a little restaurant owned by two deeply enamored food lovers. Pick your fruits in Bränneriets Gård as part of the national hobby; fruit picking. Cook outdoors on a fire in Nyrups Naturhotell, where you can spend the night in a yurt. You can join the table anywhere: with farmers, herb growers, beer brewers. You will be served a spectacular variety of ecological and sustainable gems everywhere. One final tip: If you have kids that whine and only want to eat fast food, don’t take a road trip through Skåne. Almost everything here is organic. Either that or send your children to Holy Smoke, a barbeque paradise for the unswerving carnivore. For dessert: holy smoked vanilla ice-cream. 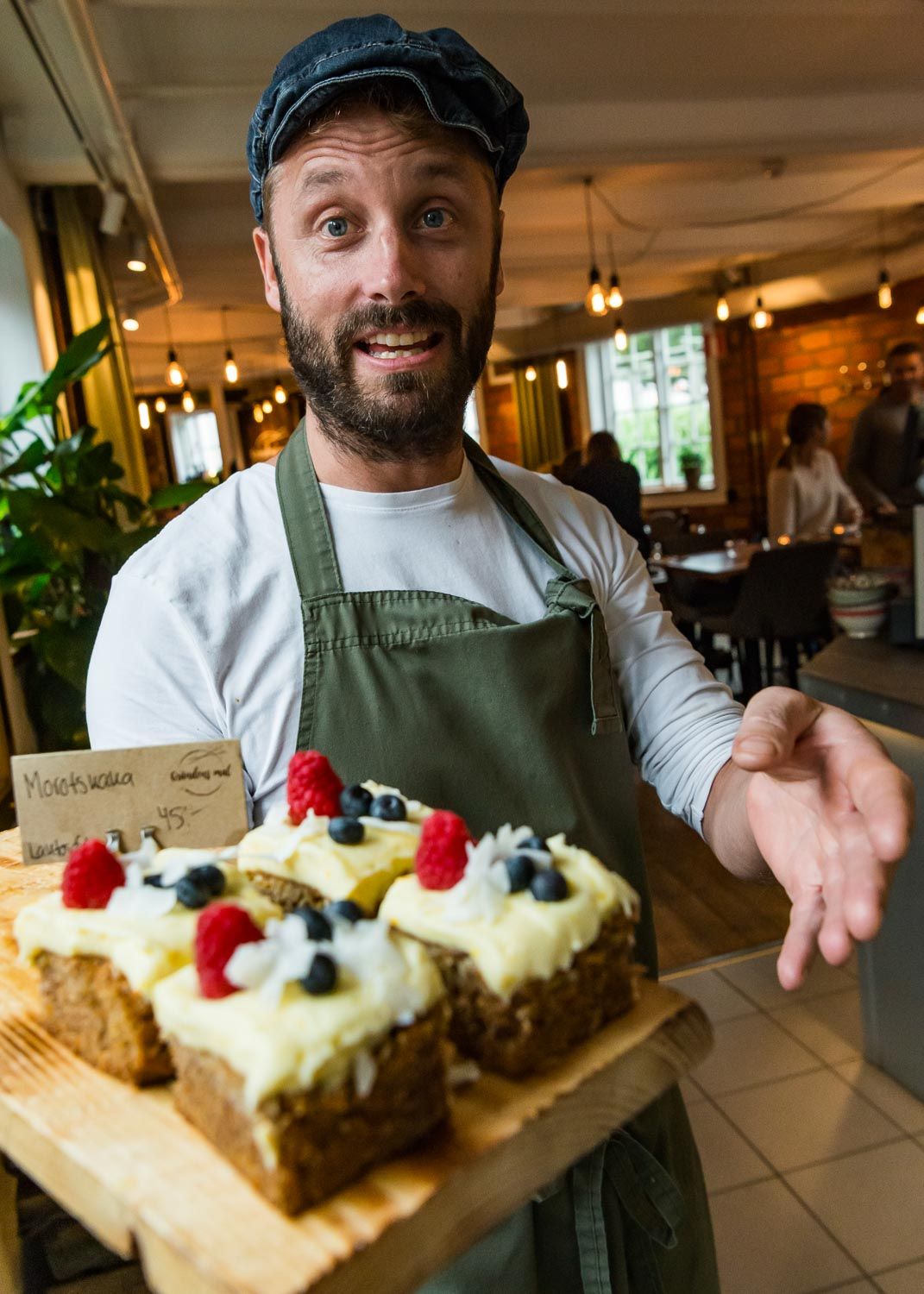 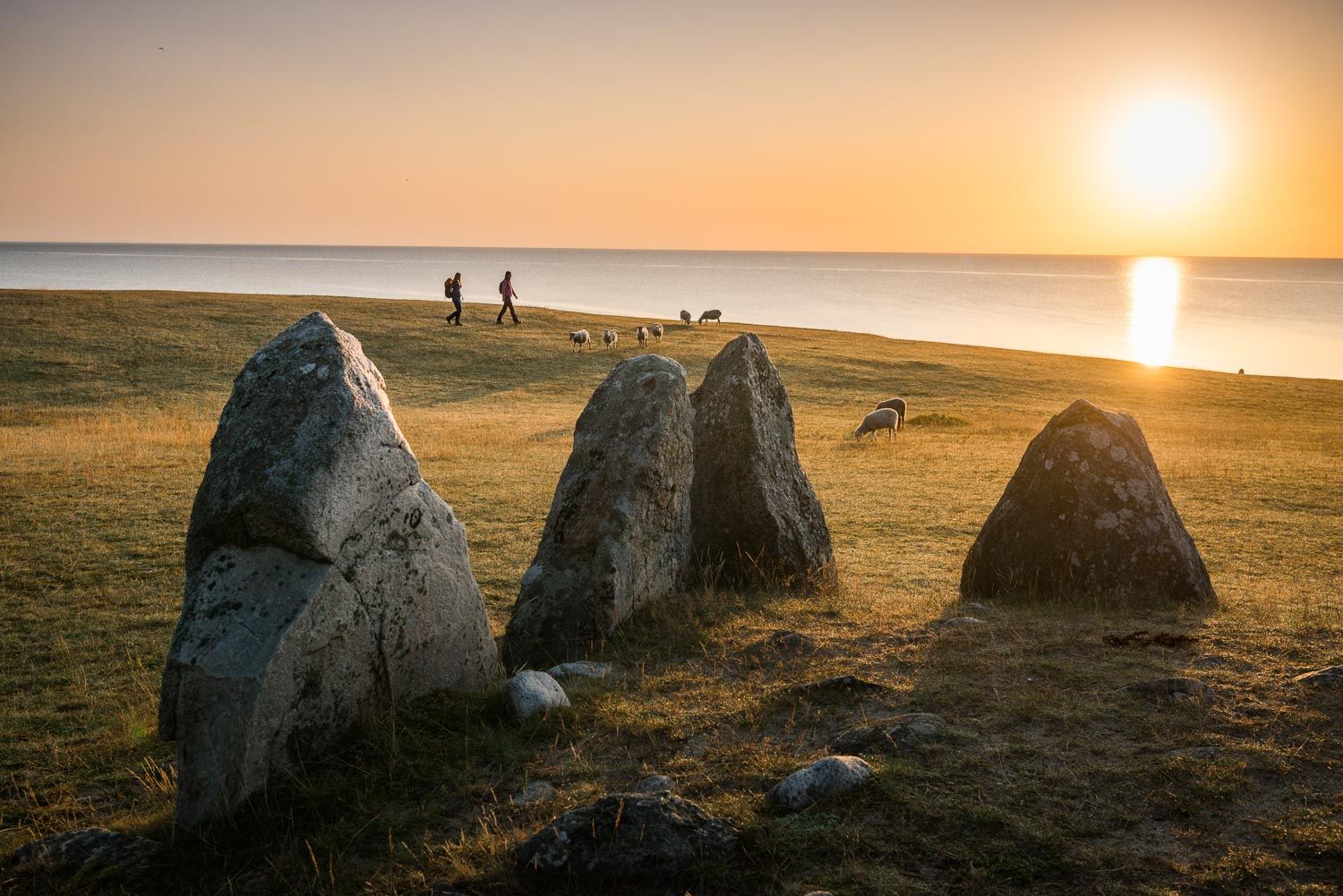 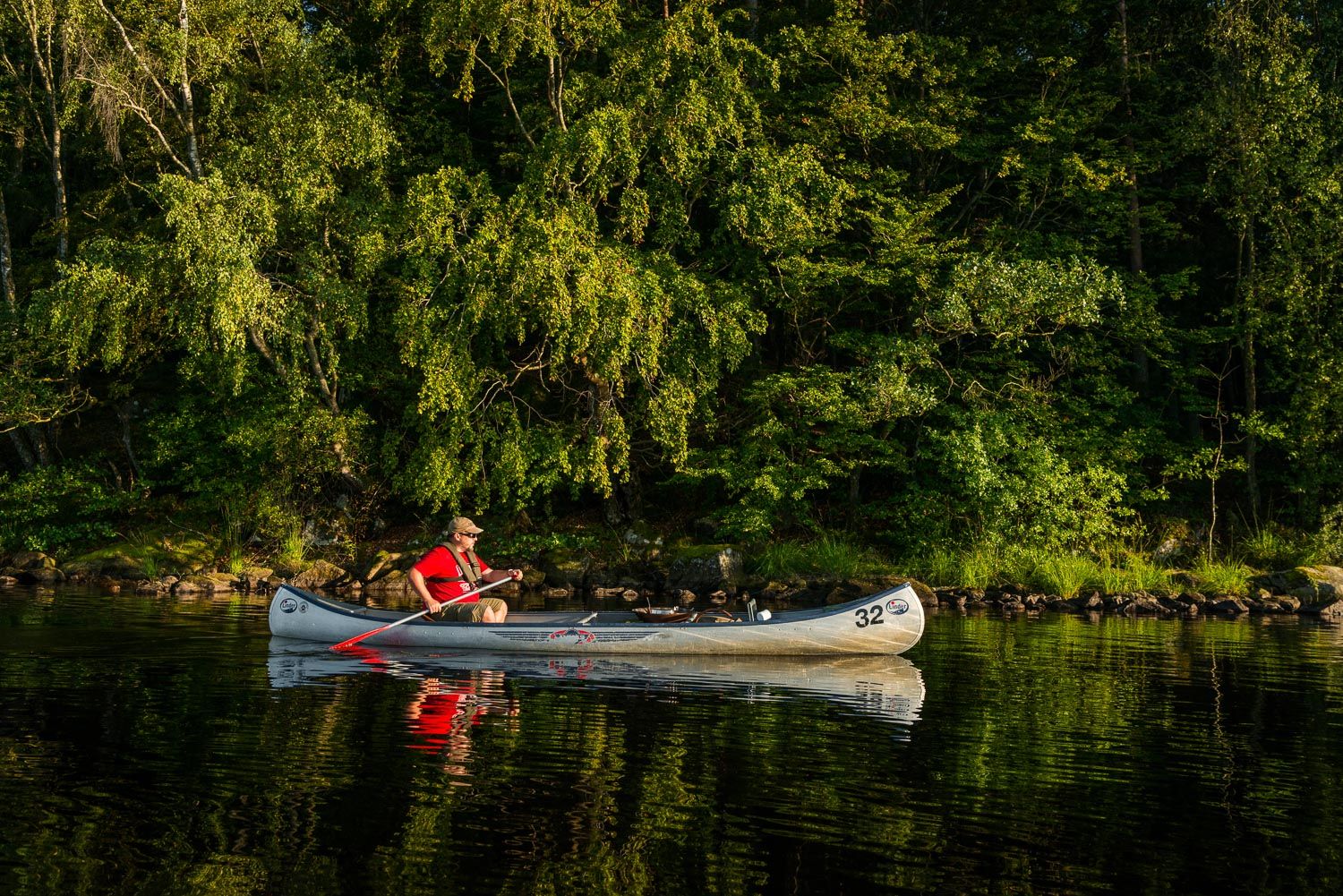 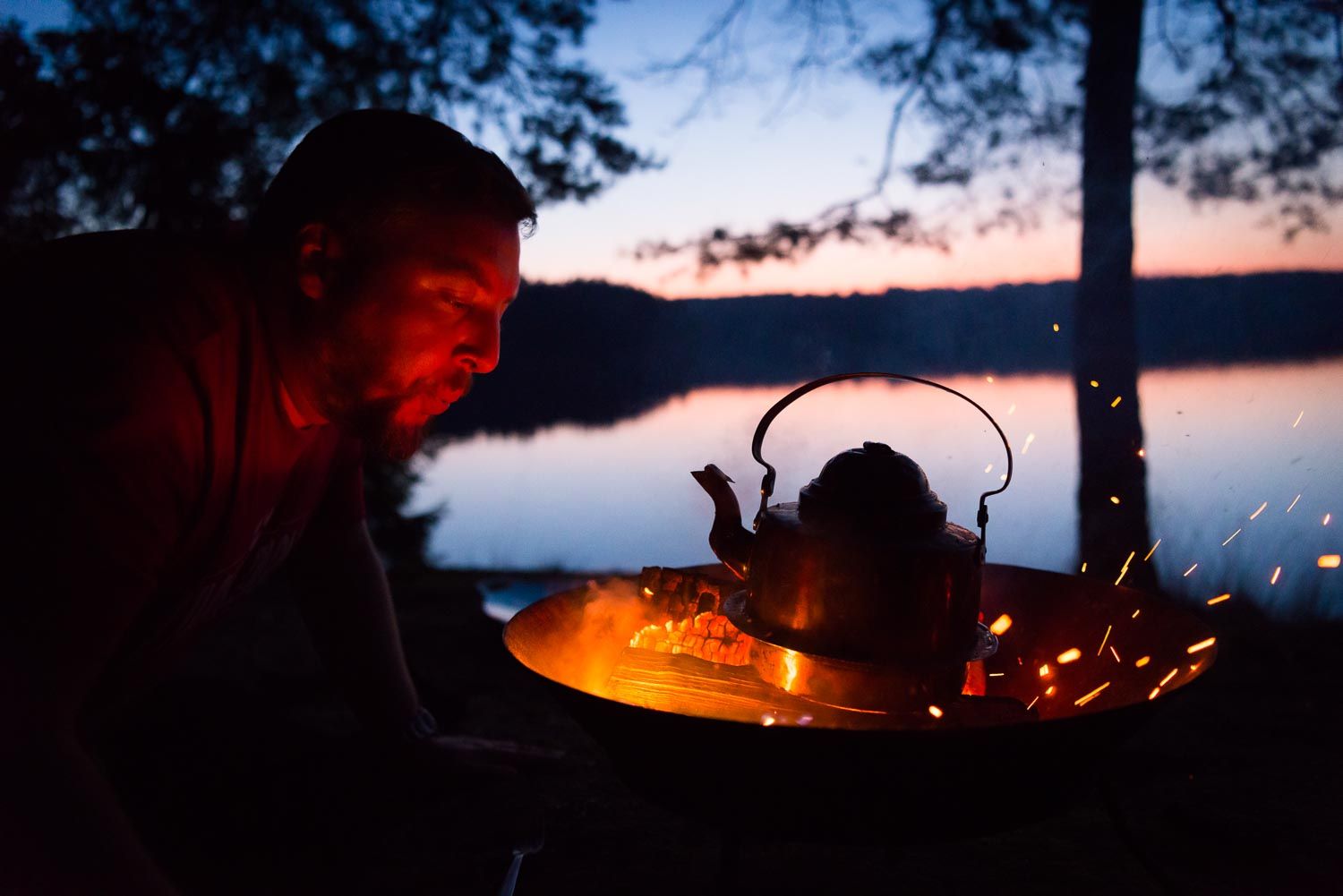 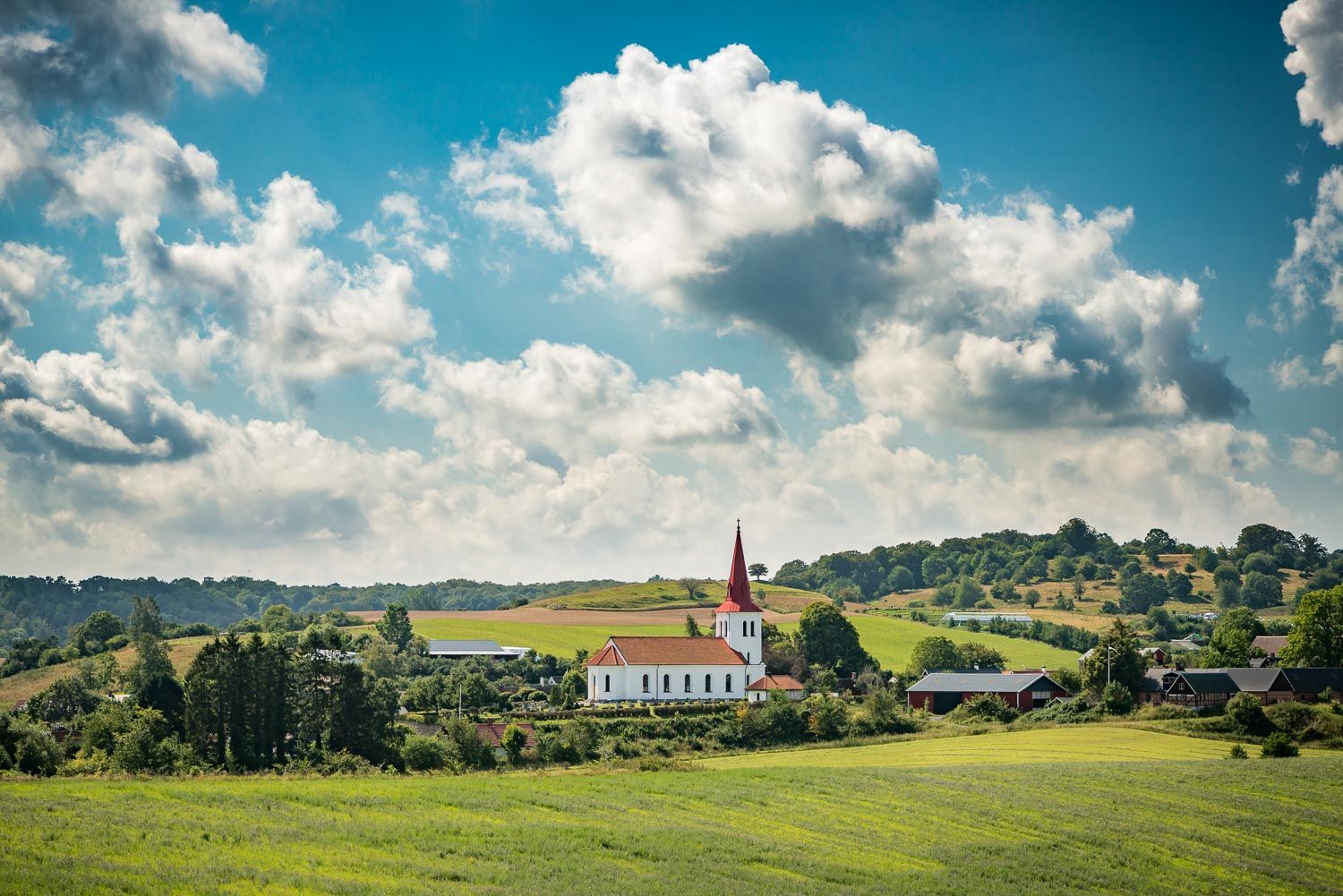 Fly an hour, drive an hour, canoe an hour
Eating meat is under attack. We all know it. Above all here, in the land of Greta Thunberg. Shame about flying has penetrated everywhere, especially in Sweden. People are going on vacation in their own country more often, by train. I apologize for the header on top, but this was our experience.
Where are we? We are with the WideOyster team, sat around a fire with Jon Marin, the owner of canoe renting company Outcraft. The island where we have just moored is in the middle of Immeln, the third largest lake in Skåne with 200 small islands.

Two hours of slow cooking, stirring a little, talking a bit about what makes life meaningful and staring endlessly at the fire

Fly an hour, drive an hour, canoe an hour – and you are there. Jon Marin is a man with no limits: a nature-loving father and husband, a businessman specialised in adventure travelling, a local politician and former army officer. Our homo Universalis is currently building a fire. There is no wind. The ripple in the lake that I caused with my dip in the water has completely disappeared. The first stars have begun to appear. The sparks of the fire are dancing around Jon’s face. We are eating pytt i panna, a hash as my mum would say. At the same time, my mother is not offended when I tell her this hash is of a completely different class. It has been prepared with care: a product of two hours of slow cooking. Stirring a little, talking a bit about what makes life meaningful and staring endlessly at the fire. John rents out canoes, but he sells silence. Talking about our little fire, he says: “it talks to you in a meaningful way.” I have thousands of questions for Jon, but after the third – Have you ever seen a moose here? – I am silent. I look into the fire, knowing that we have to canoe back in the dark, crossing over the deep blue lake.
This is my best canoeing experience ever. 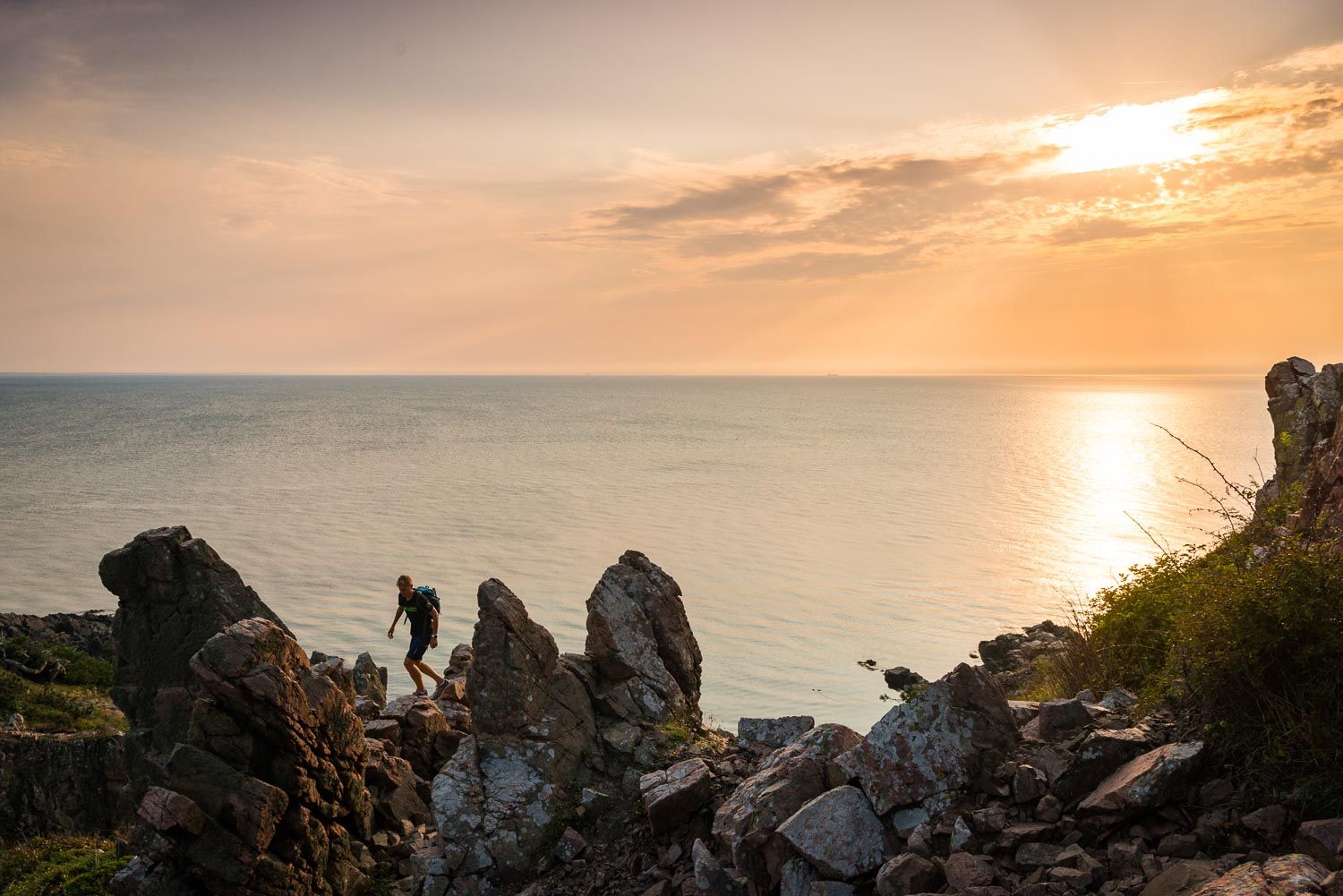 Sweden for connoisseurs
At the end of our road trip, we are in Kullaberg, a rugged peninsula in northwest Skåne with twenty-three caves and thrilling cliffs from which you can rappel. You can see bottlenose dolphins here, a lighthouse and you can even see Denmark on the other side of the water. Five kilometres along the coast is Mölle. There is something special about Mölle. This seaside resort has a glorious and scandalous history. We cannot imagine it ourselves anymore, but back the in 1910 people were flabbergasted: men and women going into the sea together. How scandalous! The black-and-white photos taken by Peter Lundh at that time became world-famous. In the pictures, you can see ladies wearing old-fashioned bathing suits and men with big moustaches and gigantic waves behind them. The material clings to their wasp-like waists, certainly more exciting than the wetsuits used for surfing in the same sea today. Another interesting detail is that there was once a train that went straight to Mölle from Berlin. It was as busy back then as it is calm today. In the summer 2000 people would bathe in the waves at Mölle daily. Both men and women! If they were as beautiful as Lisa Wohlfahrt, I can certainly understand the excitement.

Back the in 1910 people were flabbergasted: men and women going into the sea together. How scandalous!

Lisa is the owner of Mölle Krukmakeri and has the most beautiful eyes in Skåne. When we walk into her pottery workshop, she is busy working. She reaches out a hand in the form of her elbow, but with a happy smile. After apologising three times (“sorry, I still had some clay on my hands”) we are sitting at the dinner table with Lisa. It looks like a hip beach bar in the middle of the village. In the kitchen, our Neapolitan pizzas are being prepared. Lisa’s husband, a veterinarian, pours the wine. We raise a toast to Skåne, Sweden for connoisseurs. 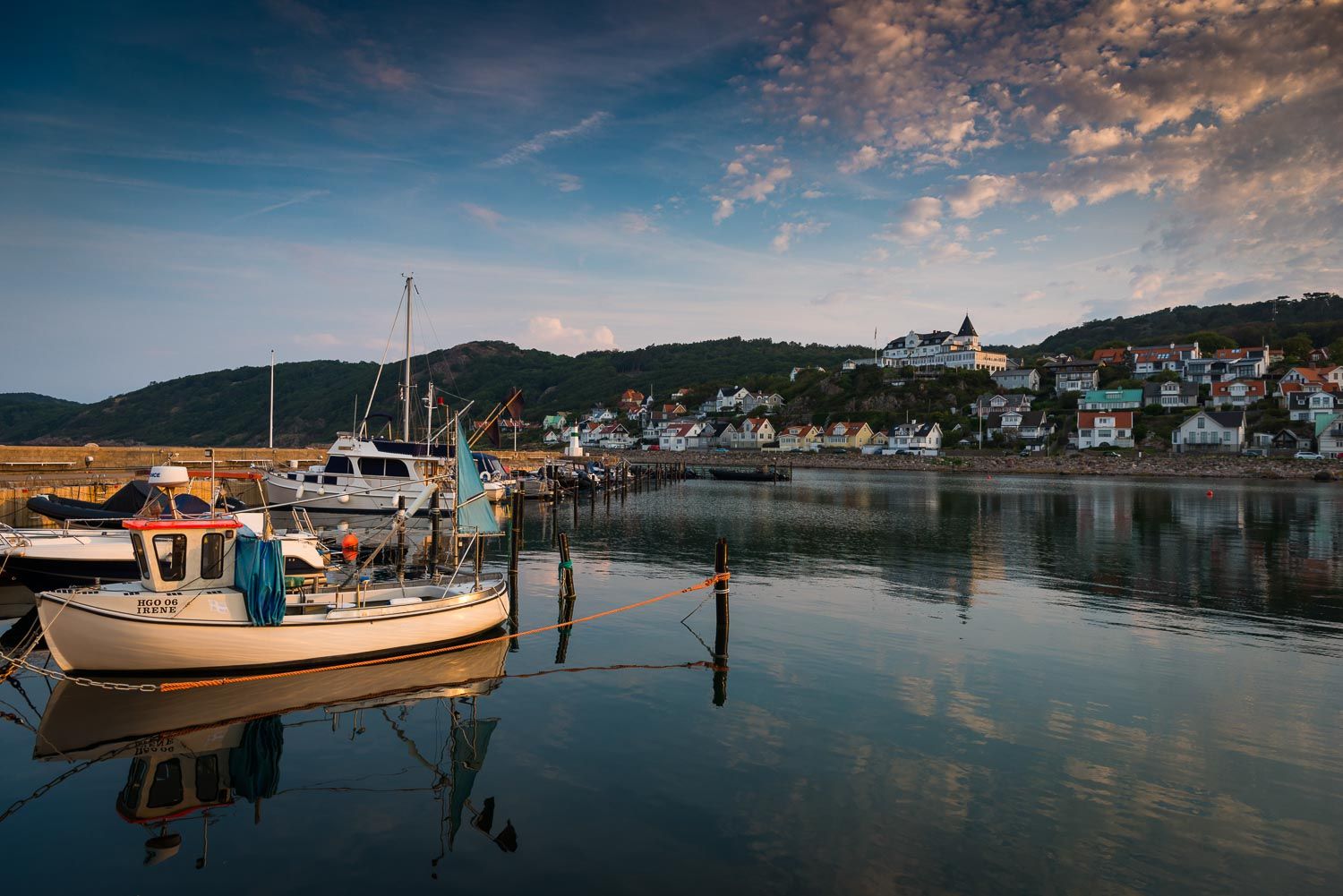 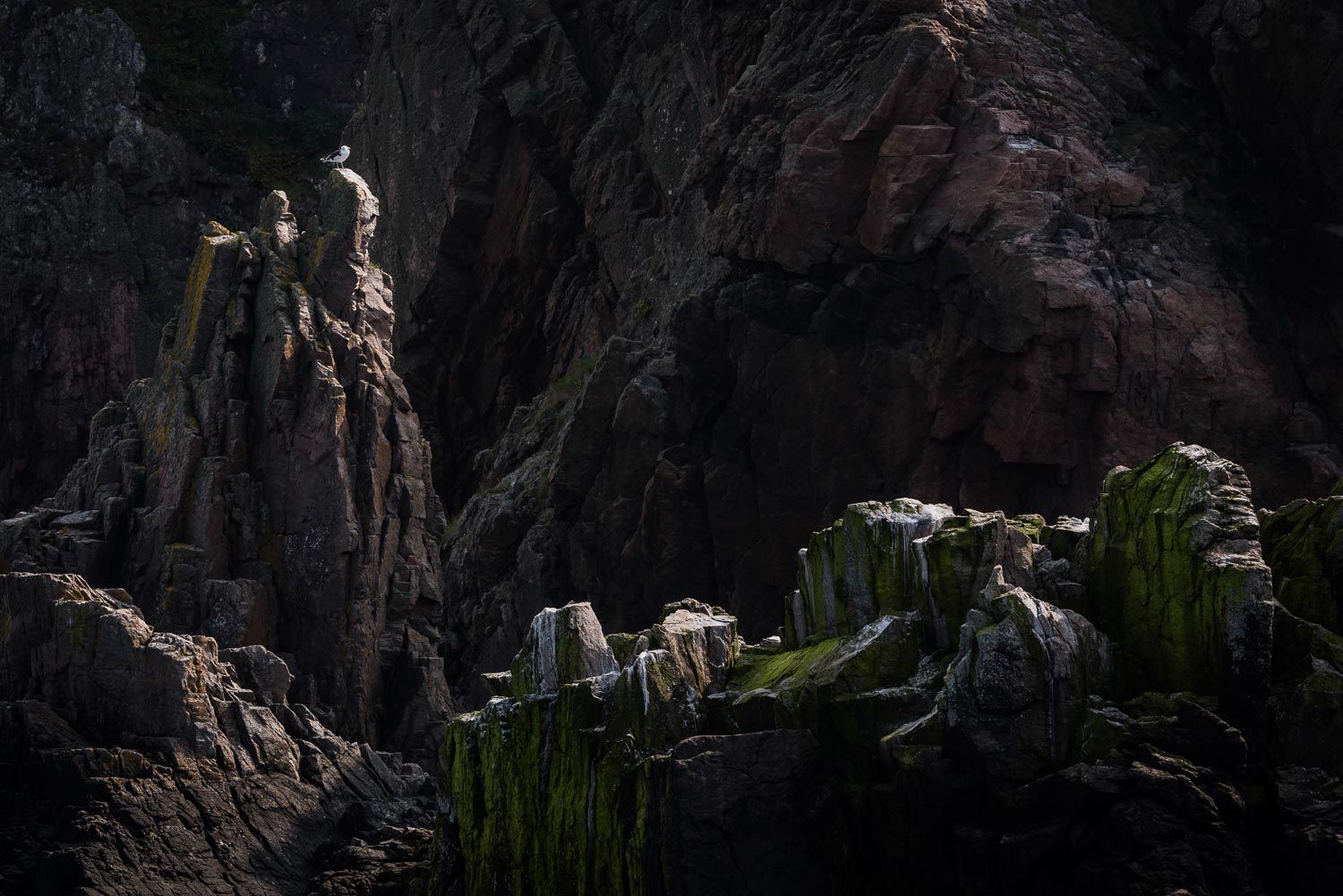 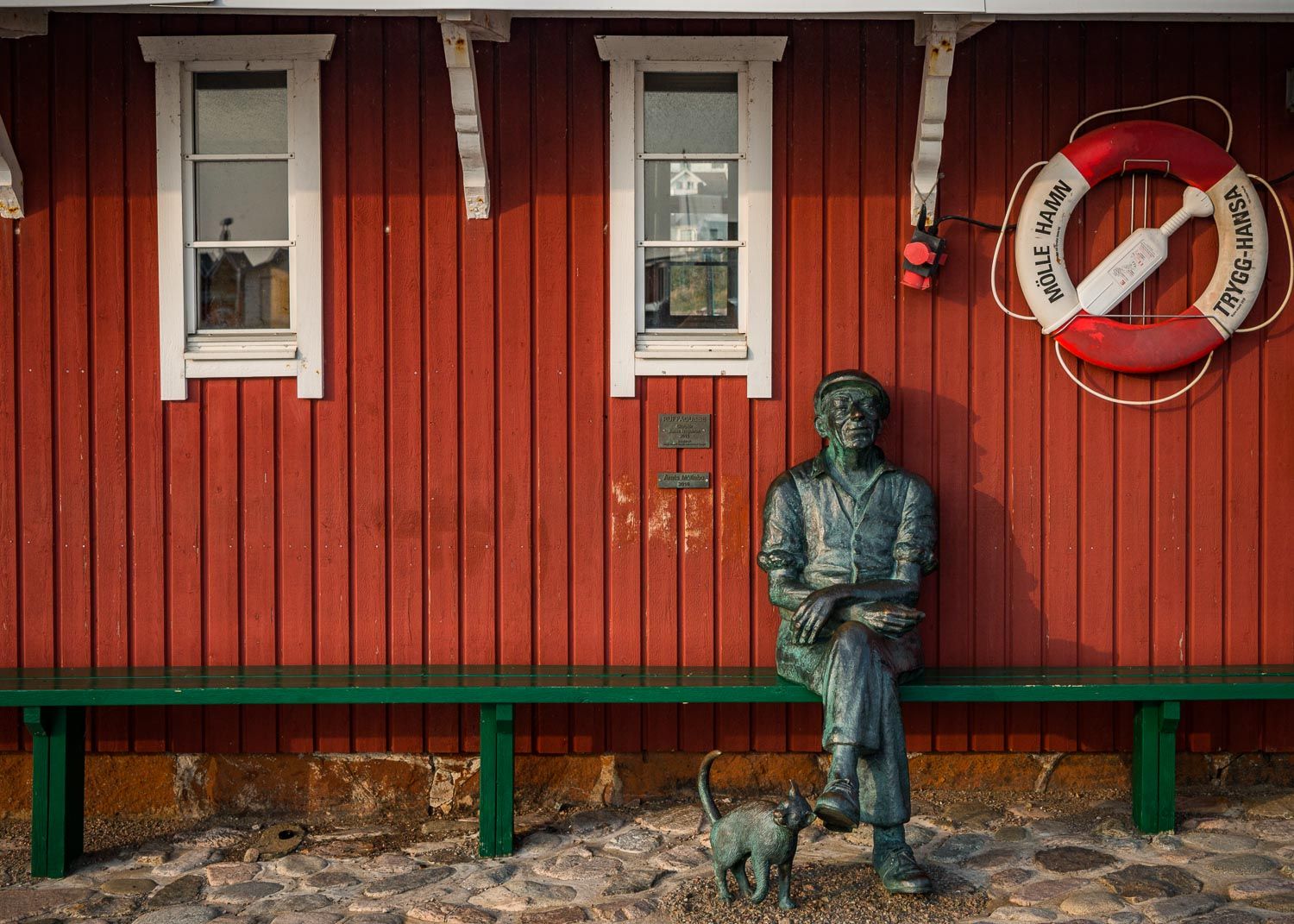 Discover the slow life of