Discover the Waddensea the Dutch way
Sailing on the Boreas

My introduction to the Wadden Sea begins on a windless Wednesday morning in September. It’s a slow awakening with the water slowly sinking and the sandbank completely dry. Come on, let’s go find some cockles.

I never waded ashore before. I know the islands, Texel, Vlieland, Terschelling, Ameland, Schiermonnikoog, but I always arrived by ferry. This time I clambered off a historic ship and walked out of the water. An almost evolutionary experience.

On Monday I went aboard in Harlingen with Henk (62) and Grietje (54), the proud owners of an old tjalk, named after the god of the north winds. In 1897 their Boreas was built to transport cattle, grain and wood to the Baltic Sea. Now she serves as a charter ship for multi-day trips on the IJsselmeer and the Wadden Sea, an inland sea between Den Helder in the Netherlands and Esbjerg in Denmark with a total length of 500 km and an average width of 20 km. A large part of the area consists of tidal flats and sandbanks, and another part of islands, salt marshes and polders. The rest consists of fairways. Except for the ferries, polyester sailing yachts sail here, tupperware compared to ‘our’ ship. The Boreas is a sturdy iron flat-bottomed vessel with swords as gills and a mast made from a 150-year-old spruce from the Ardennes. , a battleground during the Second World War. During the Second World War, a tank hit it. Henk has been planing the mast himself, a monster job where you have to be wary of bullets, I understand. If you hit an old bullet with your planer, that’s the end of the planer. 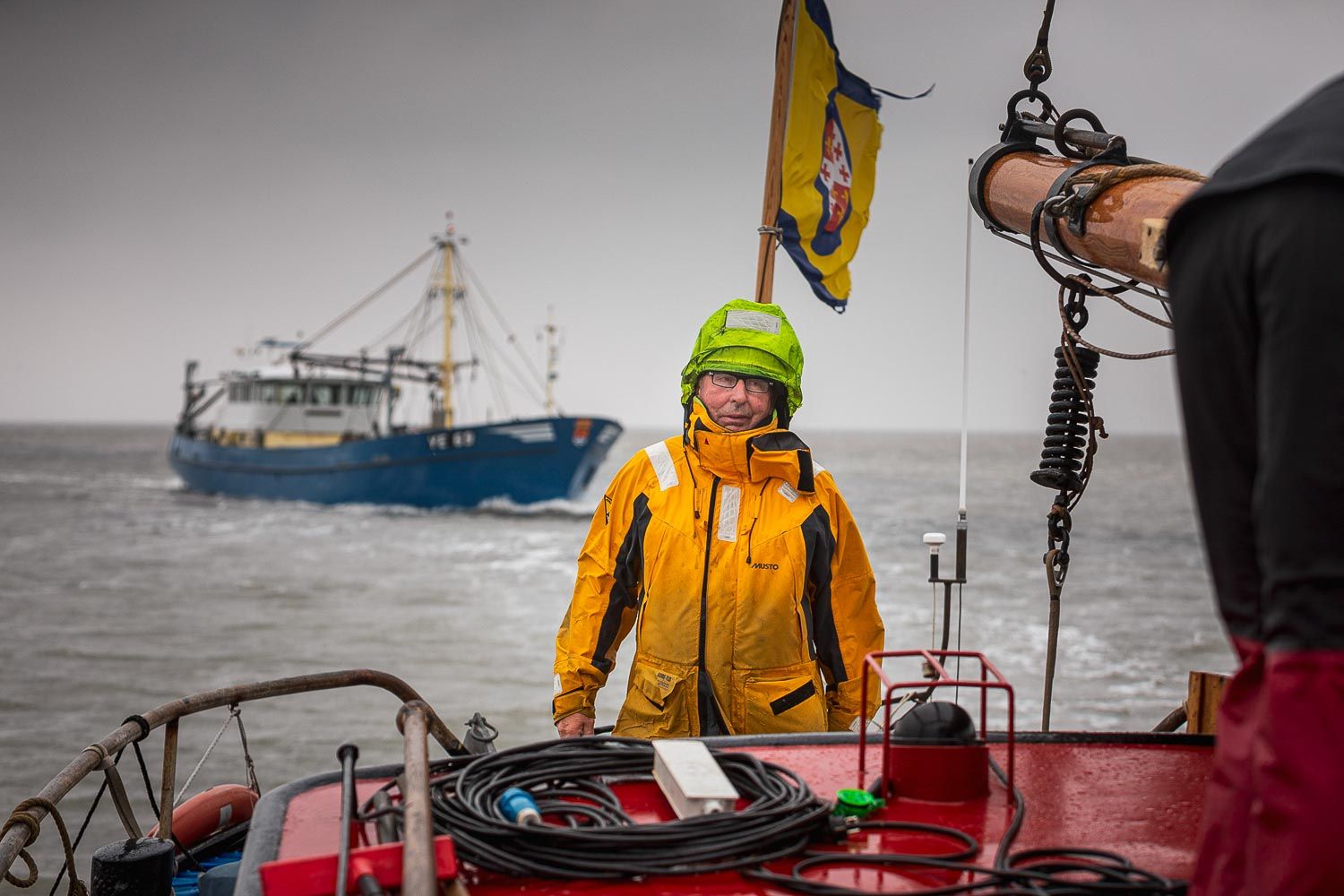 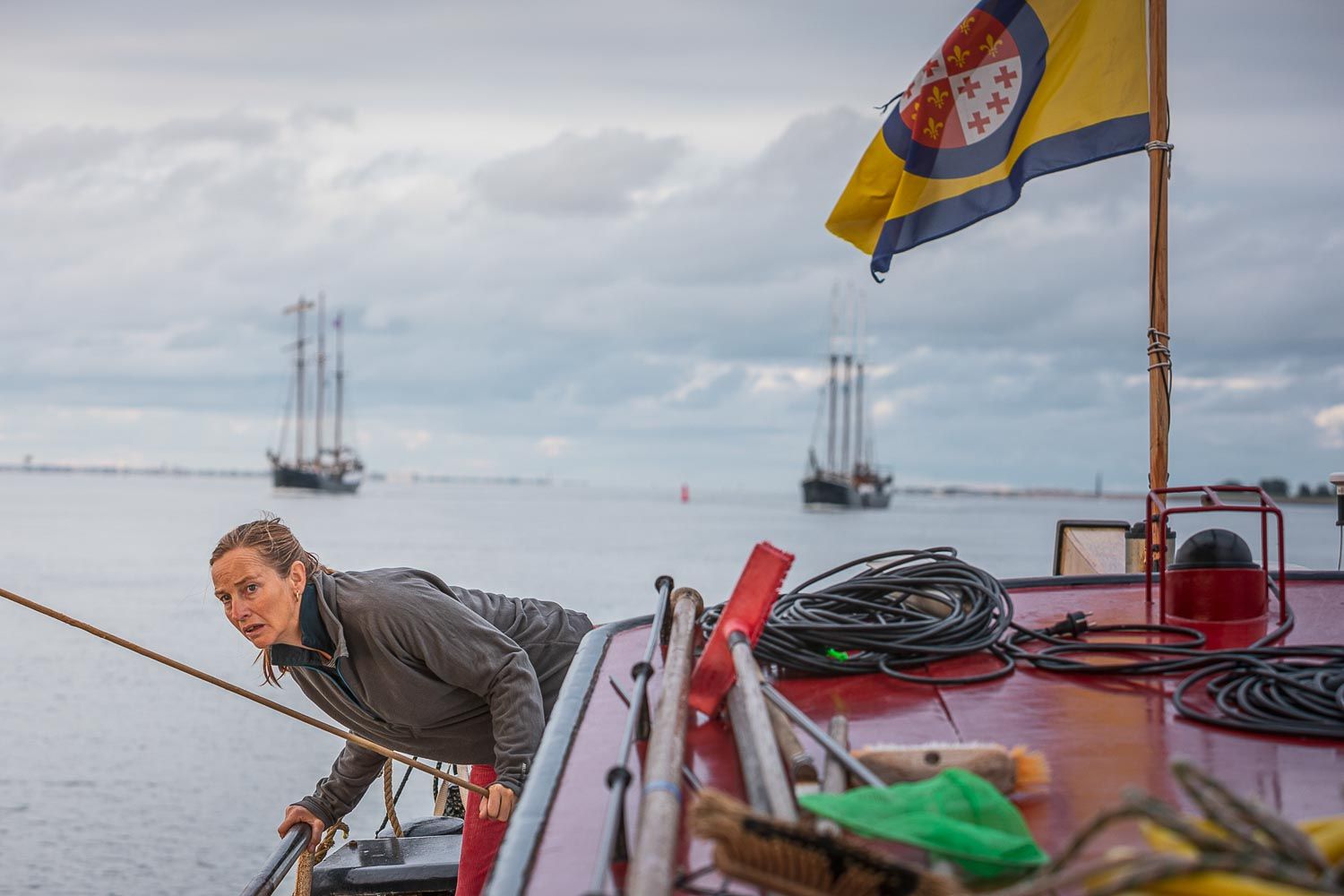 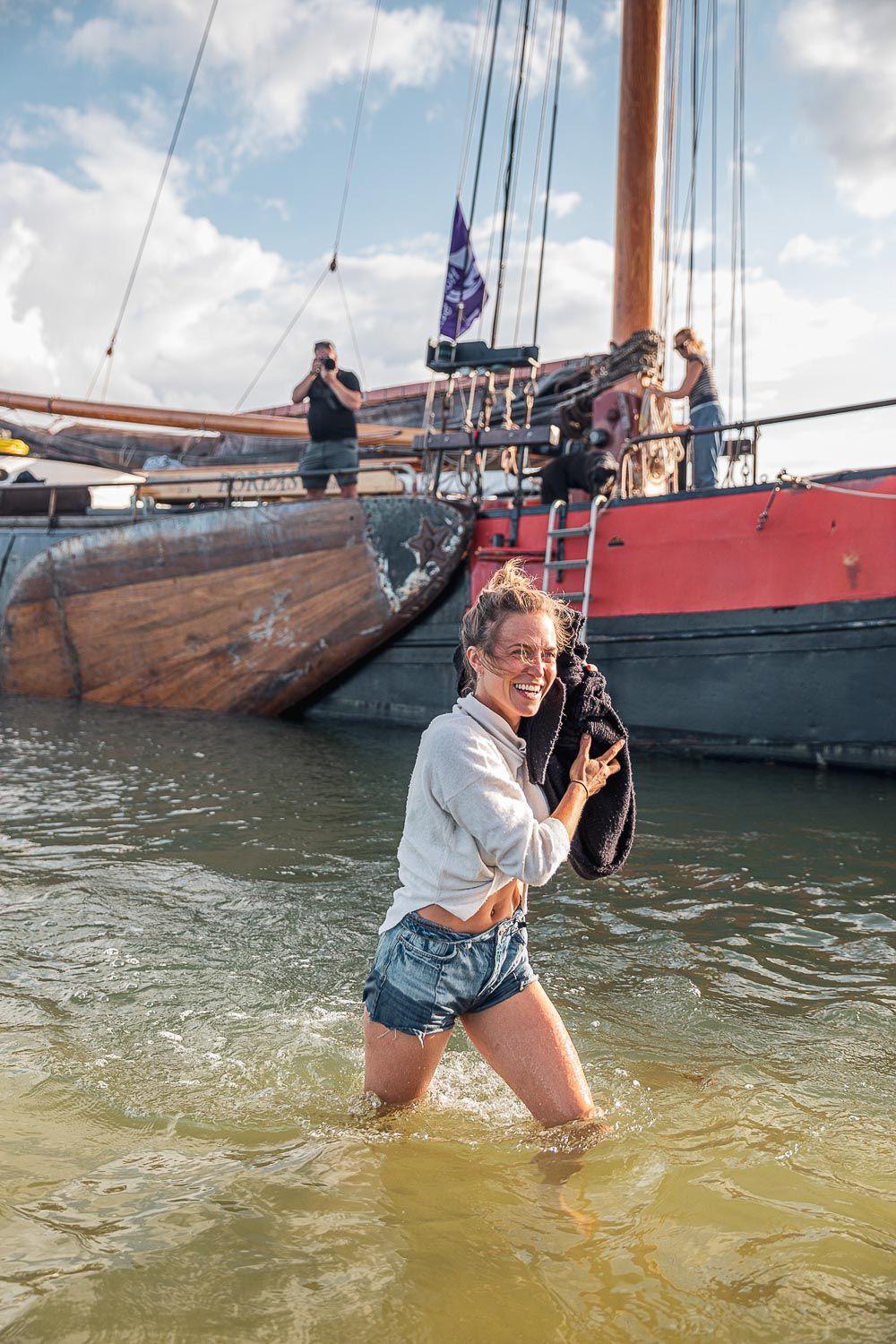 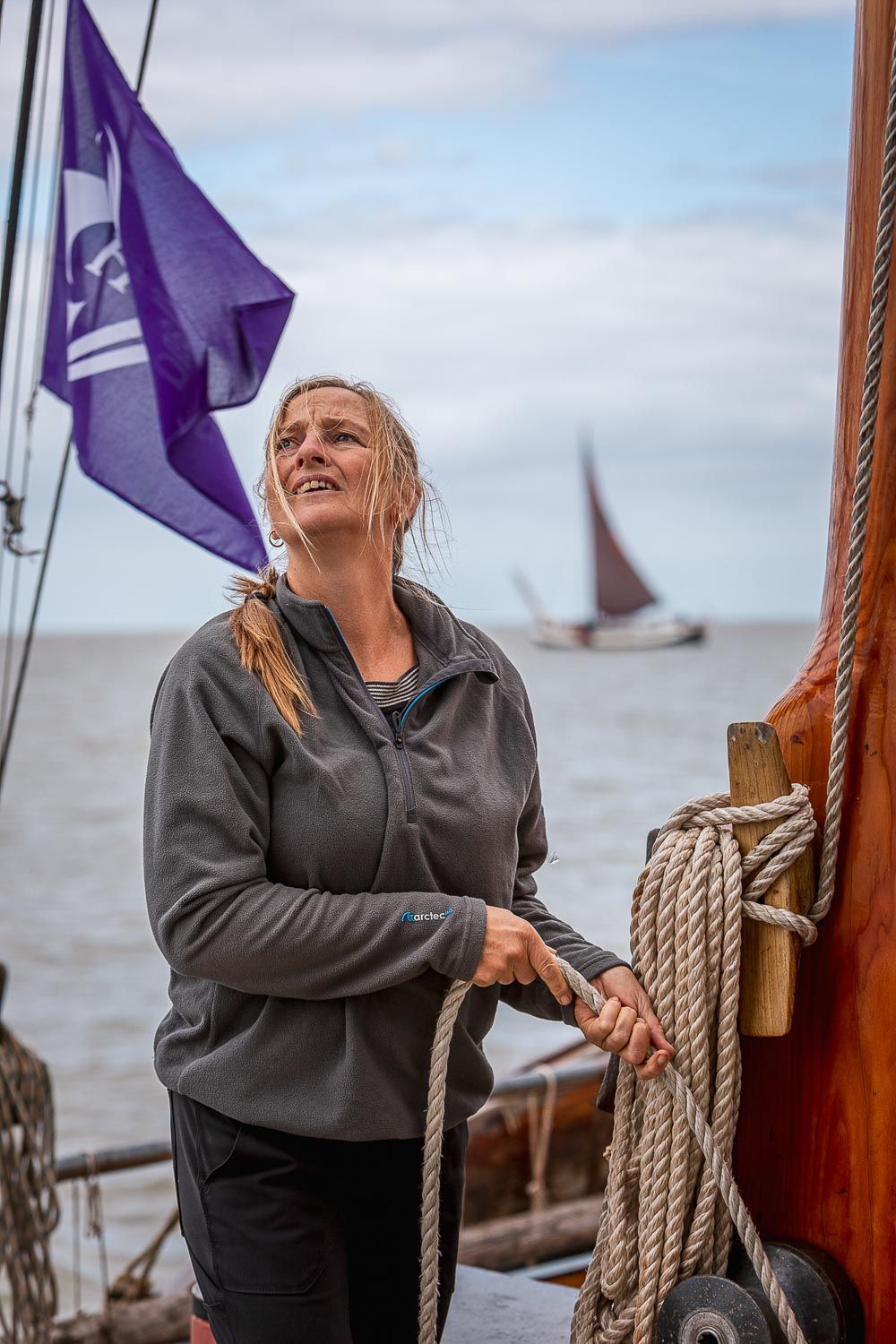 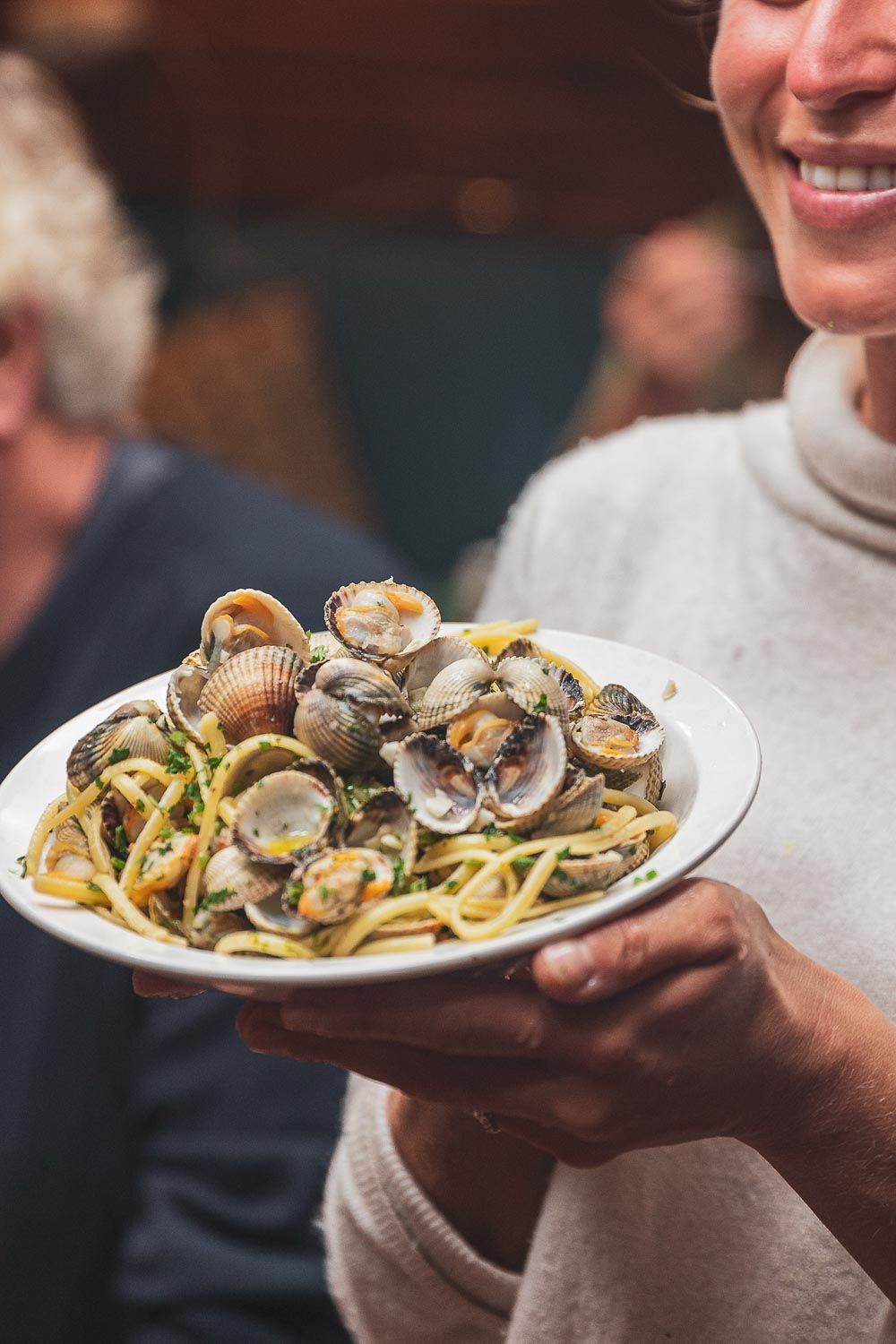 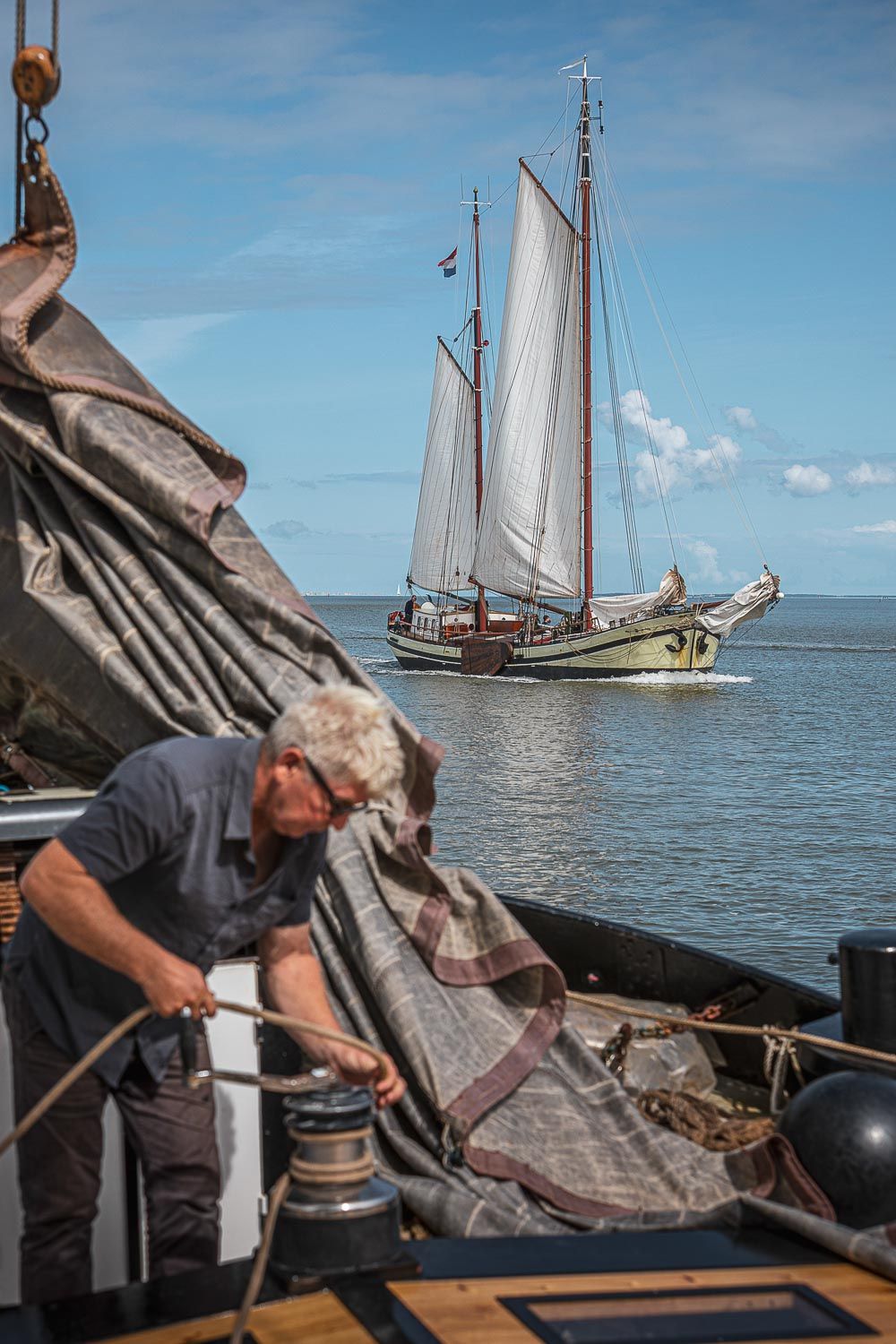 GO WITH THE FLOW
Every few years the ship goes out of the water. Then the underside is treated. Not with tar, like in the old days, but with a more environmentally friendly product. The Wadden Sea is a protected nature reserve that is high on the UNESCO World Heritage List. Migratory birds rest here. That is exactly why we cannot go too far onto the sandbank. Henk points. “You’re not allowed to go past those poles. That’s where the birds are. They still have a long way to fly and you really shouldn’t disturb them.”

The afternoon is going to be long, For he who is dry, must be patient

We have just run dry on the Richel, a sandbank near Vlieland. One by one we clamber down. We’re going to find clams for tonight. The Italian Silvia – one of the guests on board – promises to cook tonight: Vongole Linguine. That’s Italian for “cockles with spaghetti”. Not only does it sound nicer in Italian, it tastes better too. But let’s not get ahead of ourselves. It’s barely noon and the afternoon is going to be long. When you run dry, you have to be patient. On the Wadden Sea, the tide rules. Exactly what the stressed man needs. It is go with the flow and on the Wadden you surrender remarkably easy. Staring at the horizon is your only task. Sometimes you think you see boats floating. D.H. Lawrence saw it too: on a misty day the ships seem to be floating in the air. The English poet described the magic of Lake Garda, but the Wadden Sea is not inferior. Especially on a leafless day like today, with the air and water merging into each other like fused glass, you find yourself in an almost interstellar world. You could call it mindfulness, meditating at sea. 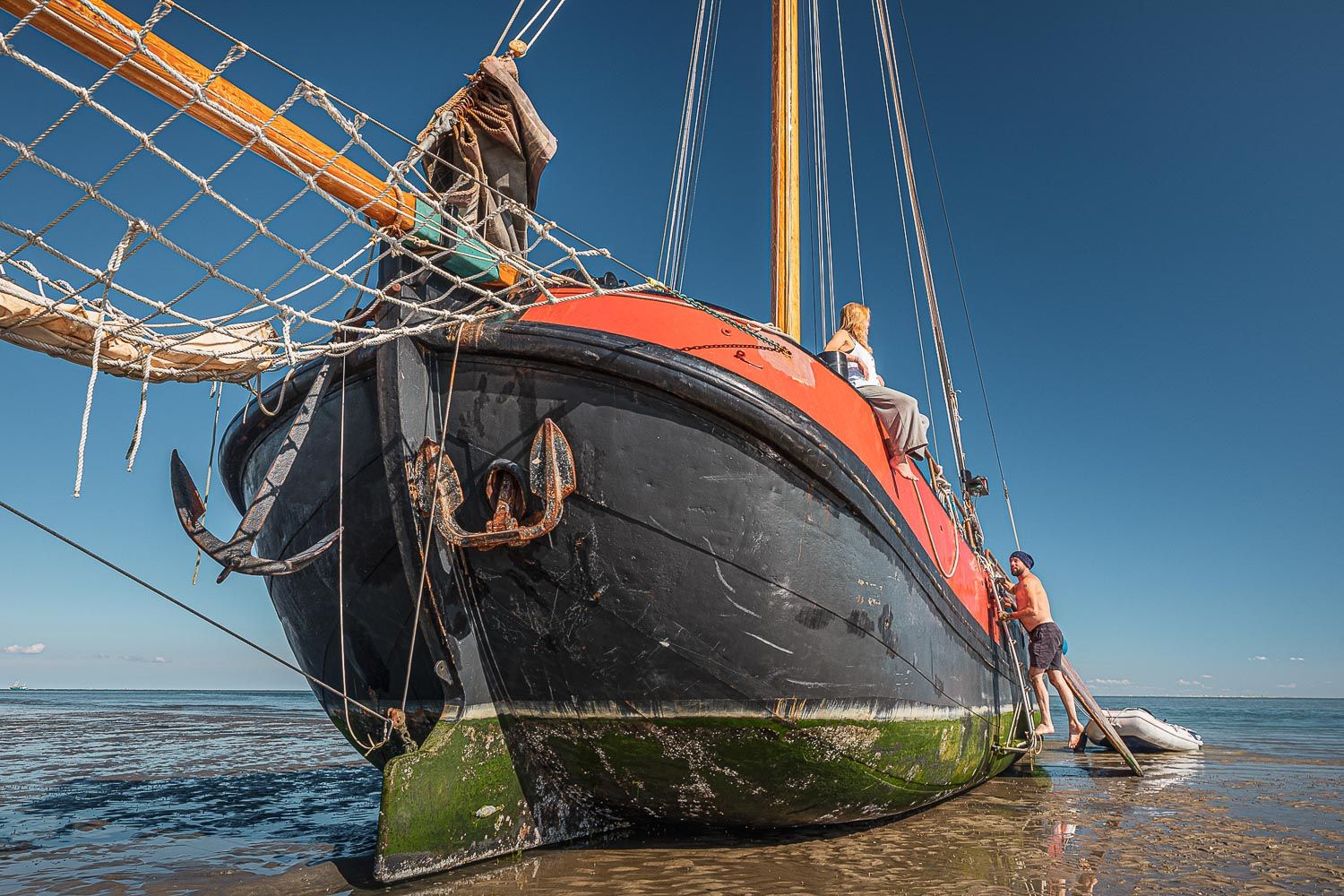 A SAYLOR’S CHILD
Call it what you will, Henk seems to think. He doesn’t know any better. The down-to-earth Harlingen man grew up in a bargees family. In his earliest childhood memory, he sits under the table in the deckhouse with his parents on an inland barge. His father was originally a sea captain, but when he met his mother and she joined him on board, he was forced to quit the big ship. “She only weighed 45 kilos at the end,” says Henk. “seasick as hell.” His father went to work on the tramp, then he chose the munitions transportation. On shore, his father ran a cigar store cum tourist information office in Harlingen for a while, but the water kept drawing him. The same goes for Henk, who was introduced to sailing at an early age. A friend had an old Aak. With a couple of friends they made it ready for sailing, some carpentry. The first sailing trip went to Terschelling. The Harlingen friends were playing cards below deck. Sailing itself did not interest Henk much. “Until I heard someone scream: The leeboard! The leeboard! Only then did I find it exciting. The wind was strong, the leeboard had broken loose. At night we went searching on the dike, with oil lamps, hoping that the leeboard would wash ashore.”

The leeboard was never found, but Henk was sold to sailing. He continued to sail for the rest of his life. Later joined by Grietje. “I didn’t know a thing about it in the beginning. Henk would shout: throw the rope to the man on the quay. And I would throw him the whole coil.”

By now Henk and Grietje have become a perfect couple. You notice that especially when it’s windy. Tomorrow we’ll have force 7 Beaufort. “Then we’re going to buck,” grins Henk, who is still standing in the water in his underpants at the moment. In his hands he has a full bucket of cockles. Grietje hands him an empty bucket. Stooping, he pours the cockles from one bucket into another. De-sand. “Can’t you just do that with tap water?” I ask. “Then they’ll die,” mutters Henk. “They must be suffer a bit before they enter the boiling water.” That grin again. Skipper’s humor 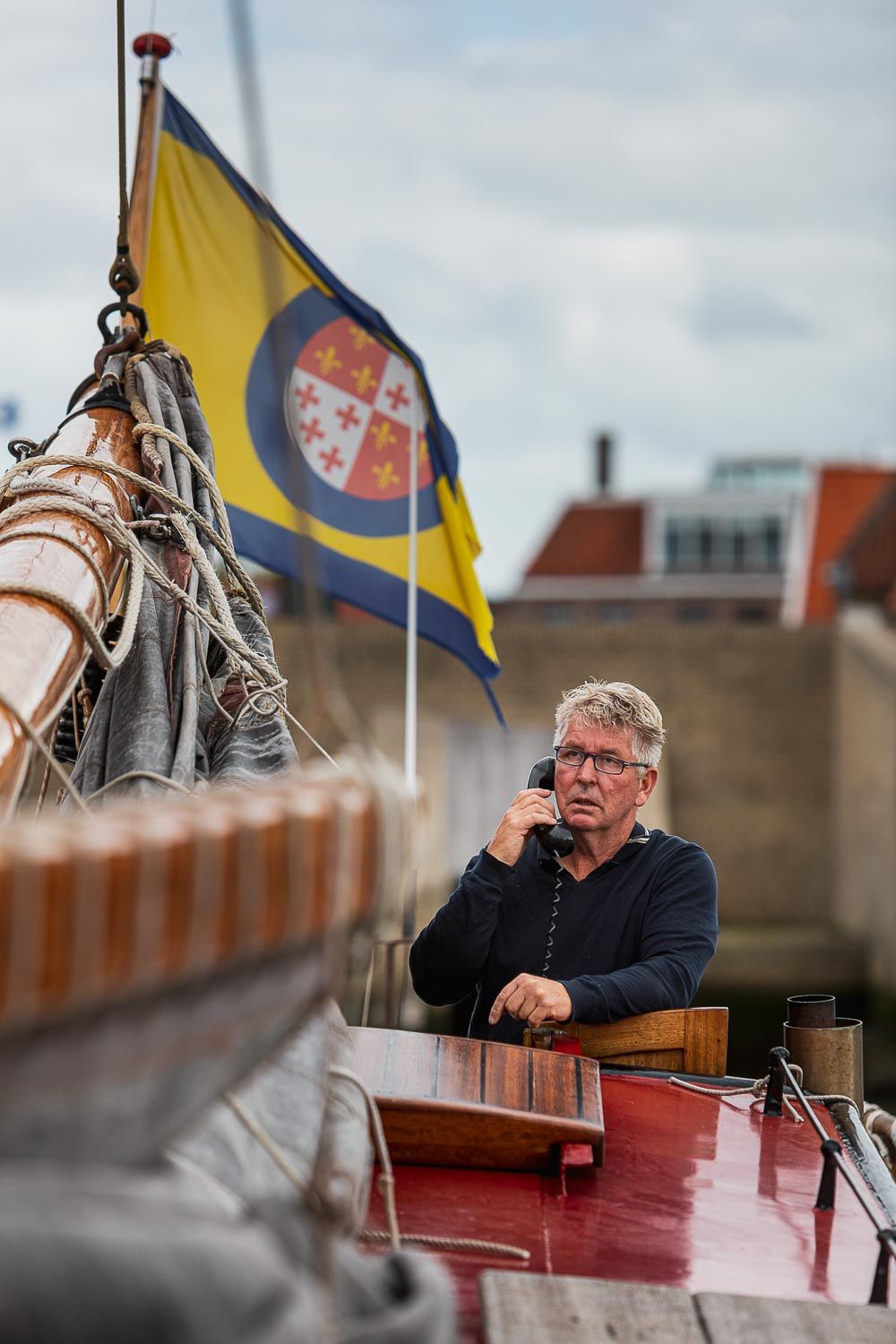 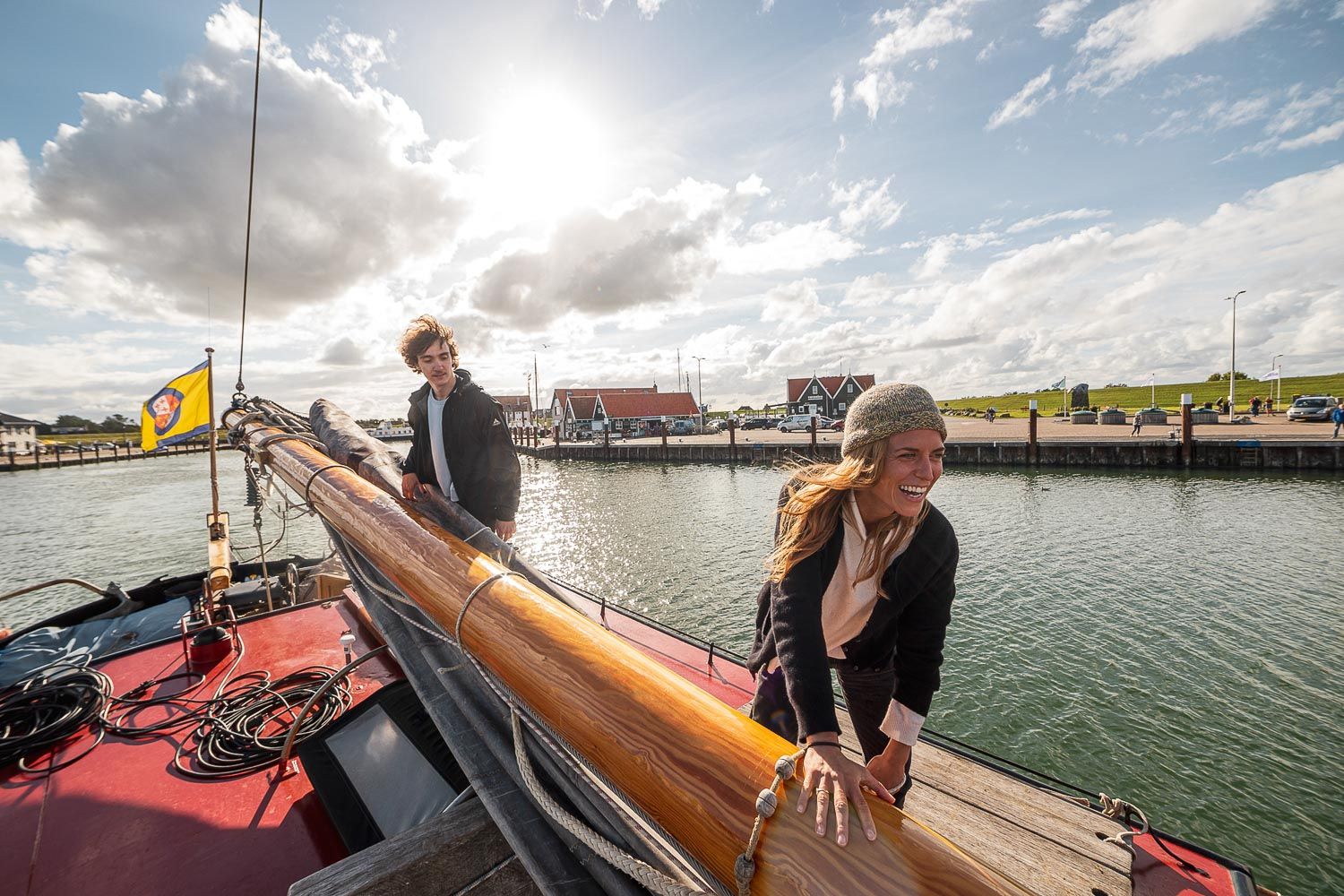 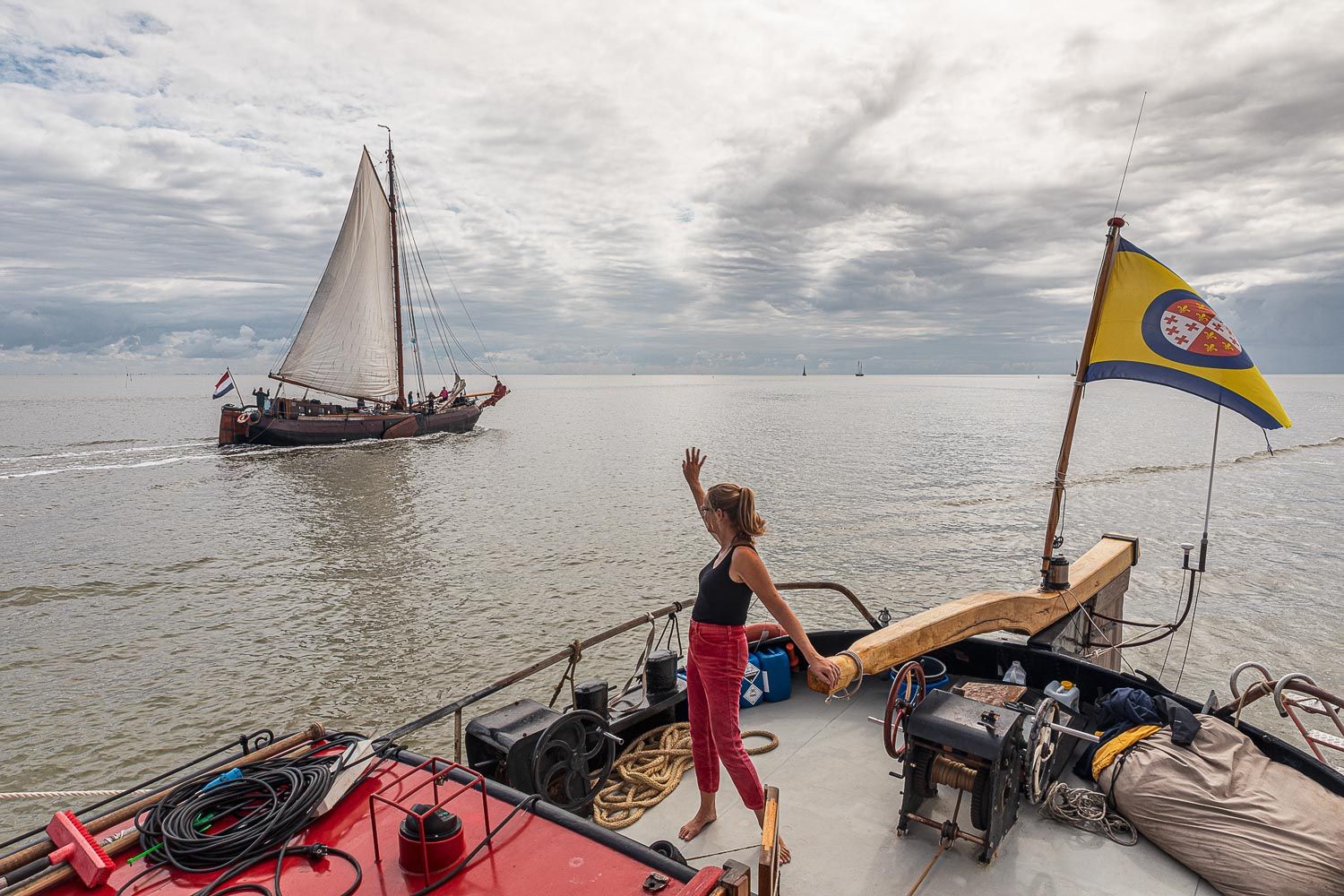 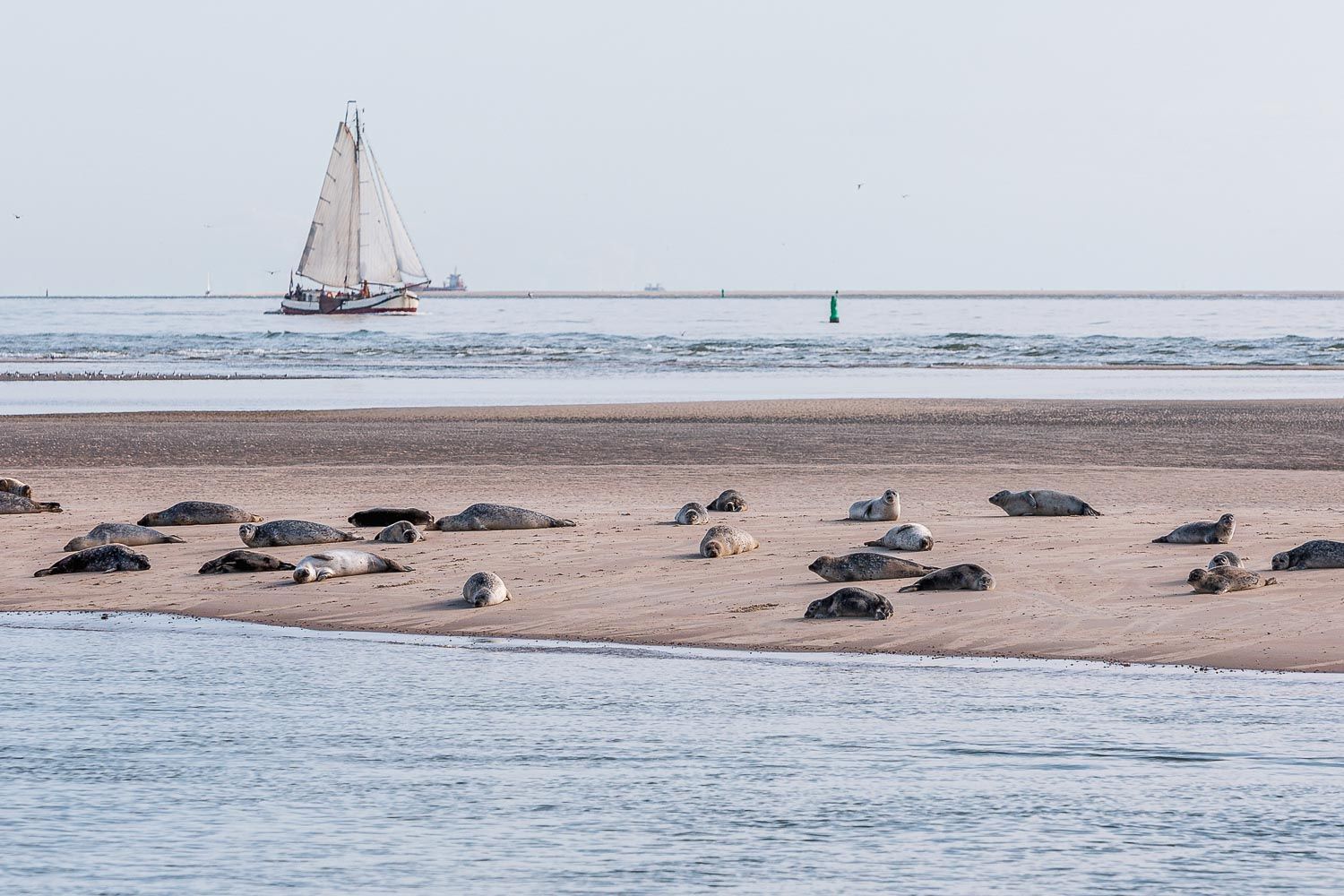 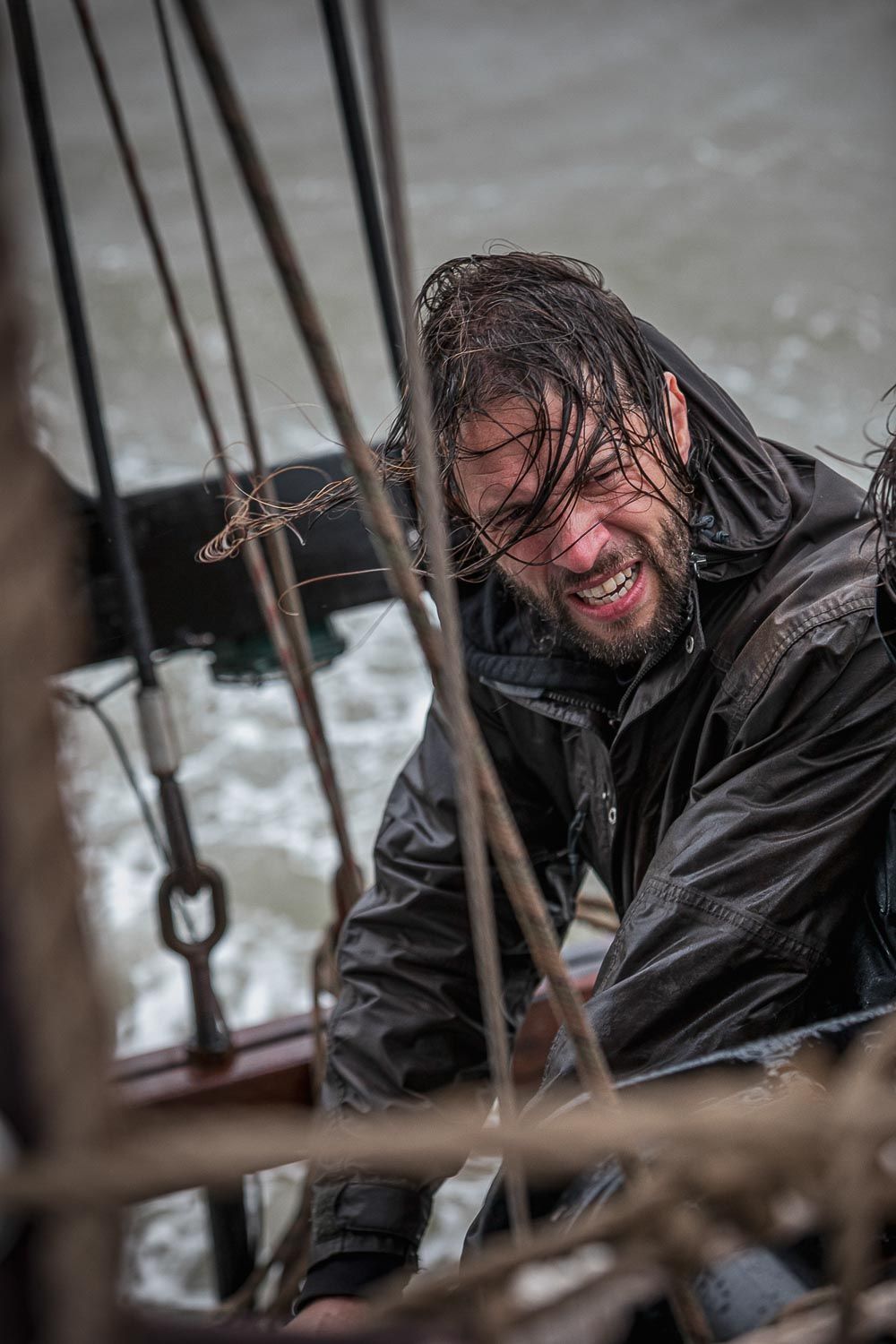 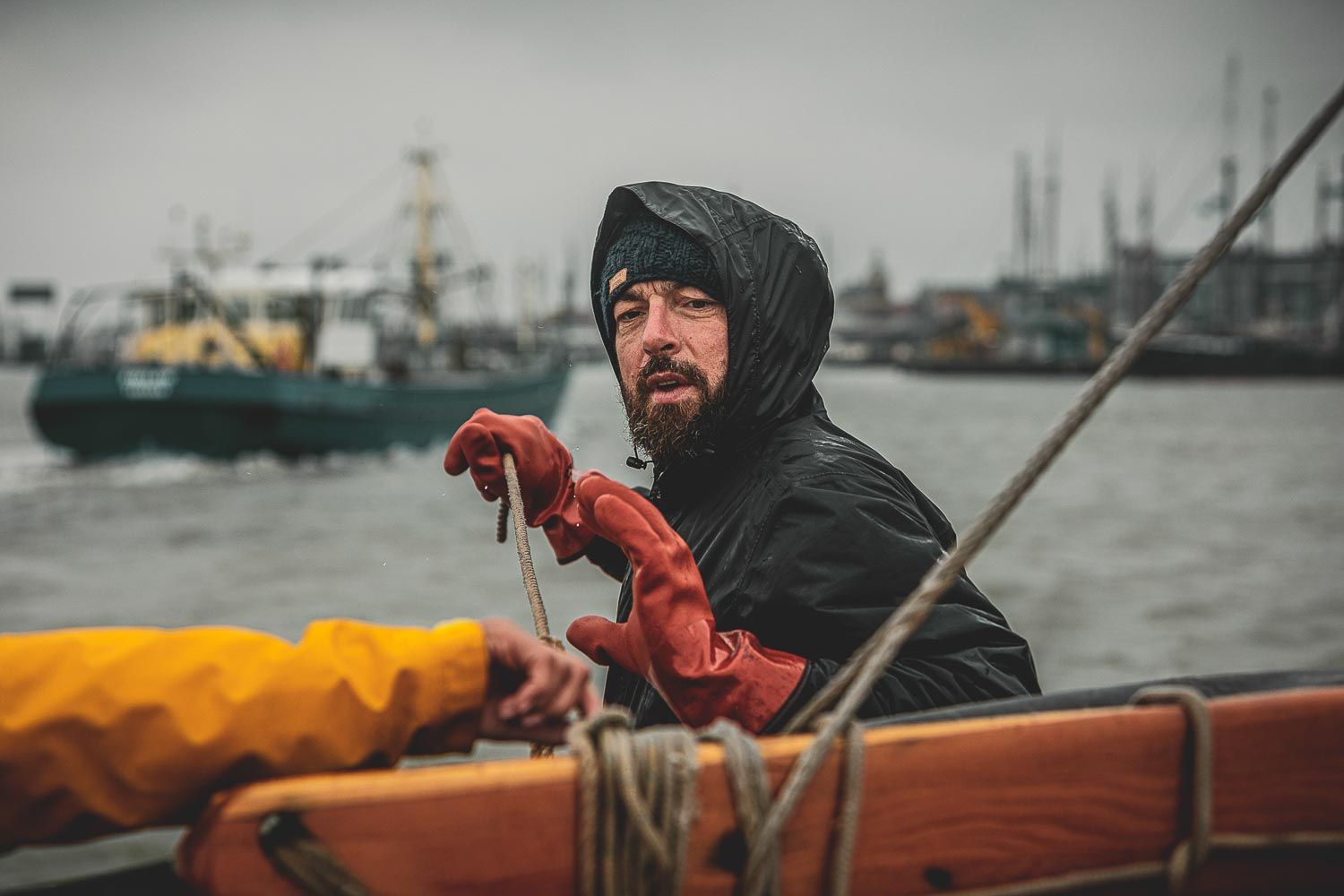 AND THEN THE WIND BLEW
The last day on board the Boreas is nothing like the days before. It was already predicted: 7 Beaufort. Dressed in an arctic sailing suit, Grietje walks into the galley. Slight anxiety on her already windswept cheeks. “Is everyone still asleep? I’m going to need some hands on deck soon.”

In the mainsail (145 square meters) two reefs are used, three would have been better. The yankee sail stays in the bag. This sail, we were told yesterday, is a beast. “At wind force 4 to 5 it lets the ship sail 2 knots faster,” says Grietje, “but the yankee is hard to control. It’s like a wild horse.”

With the sails still set, Henk reports to the harbour master of Vlieland. It sounds pretty ominous when he says we’re getting out. The radio crackles a little. Godspeed, I understand.

THE SHIP IS LOW
We’re going back to the home port, back to Harlingen. But to reach Harlingen we have to sail almost against the wind. Upwind. That means skewering and adjusting. Henk pushes his hip non-stop against the tiller, as if he were trying to push aside a Frysian workhorse. He could have done with a little less bucking. What if something breaks or the sail rips? Grietje is crouching by the leeboard winch – head in the rain – waiting for instructions. “Grietje, I’m drifing leeward, leeboard down!” At other times the ship is weather-beaten and the leeboard has to be put forward again. When the jib flaps, she is sent in. Then again, the mainsail has to be lowered. “Not too much. Ho! STOP!”

She has stood on the quay with her suitcase in hand sometimes, she admits, but that’s part of the job. Sailing puts your marriage on edge. I love it. Grietje also cooks like a 3 star chef, while Henk has collected a nice playlist on Spotify (check Fat City by Alex Chilton). He likes to entertain his guests with it in the evening via a handy Marschall amplifier. 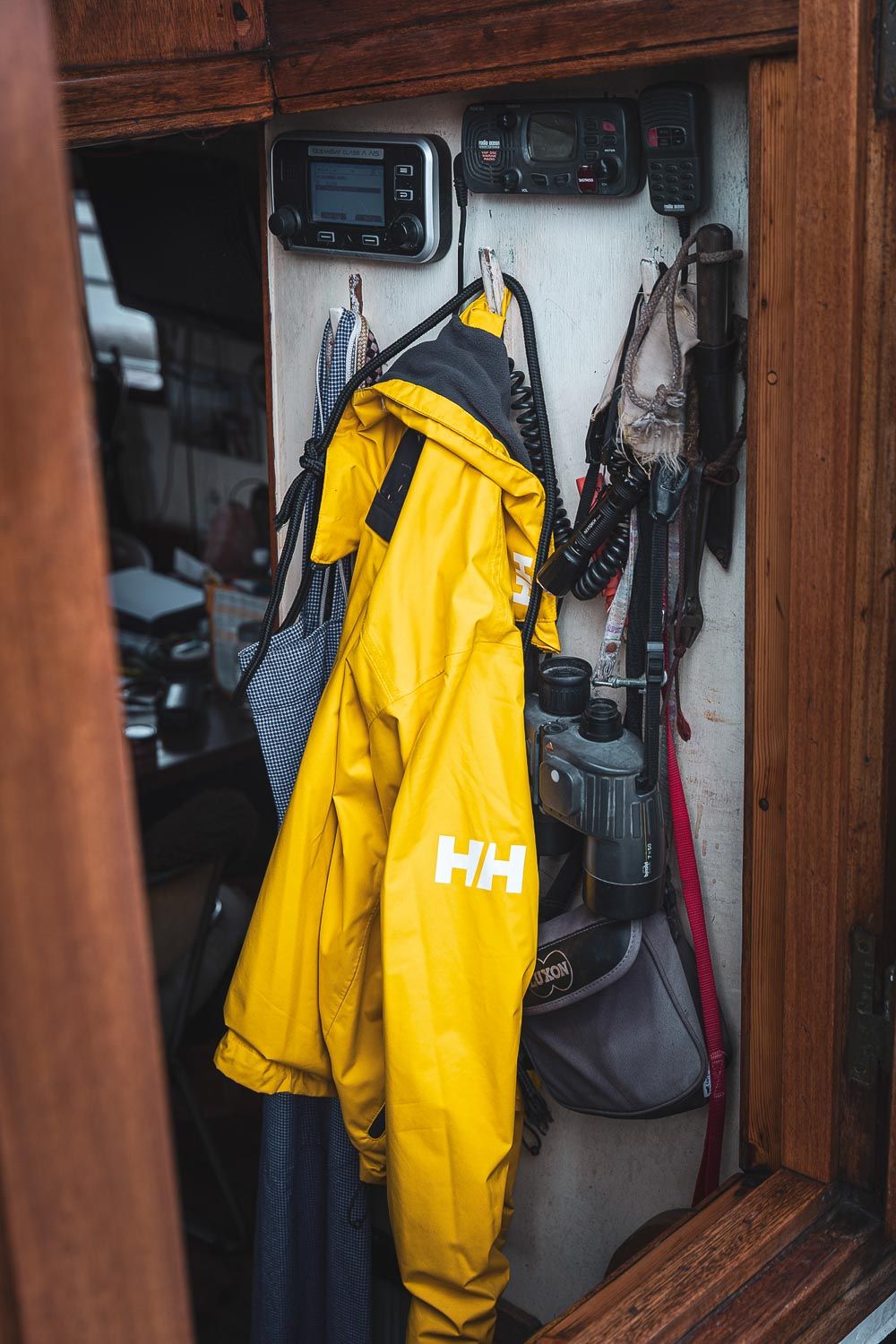 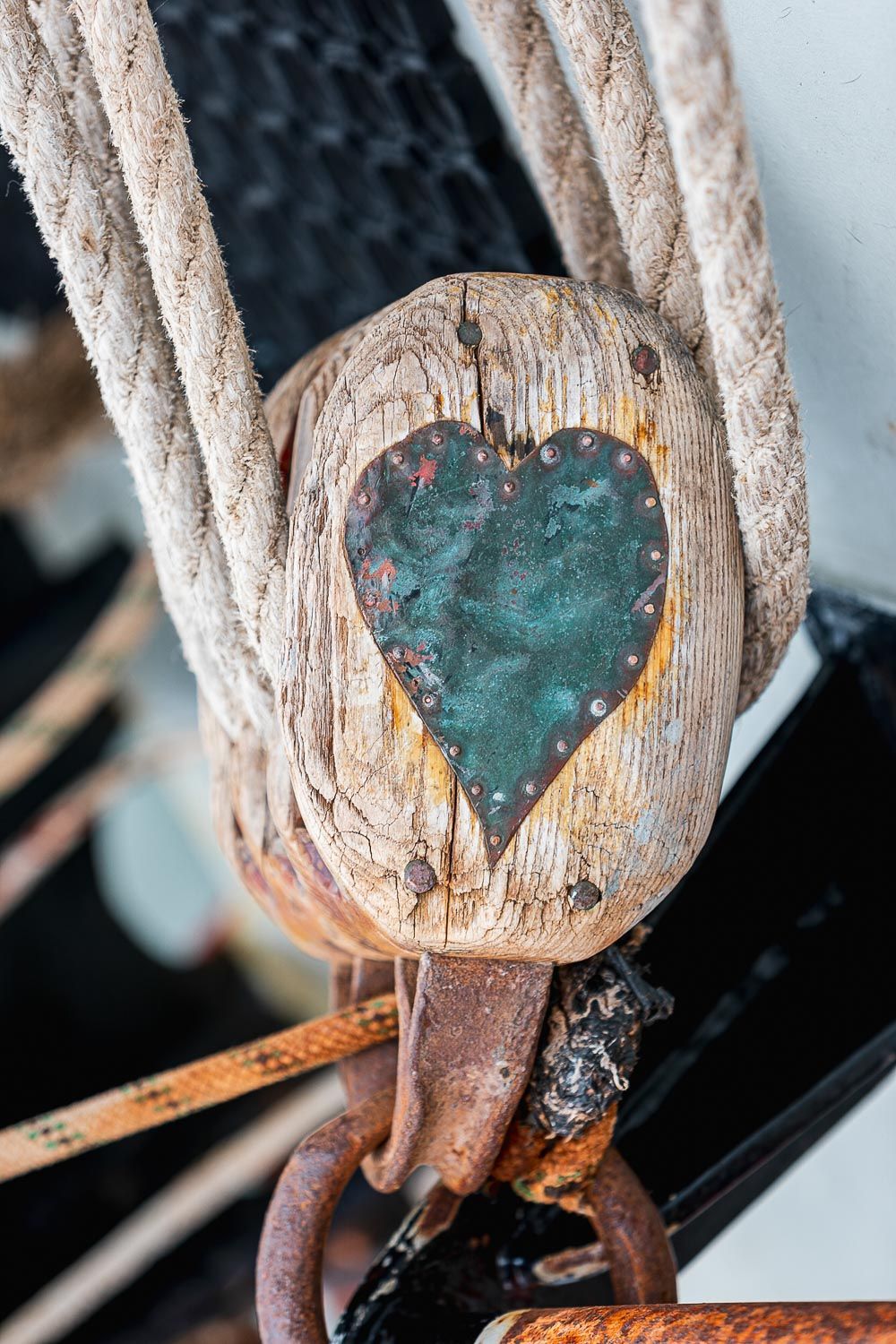 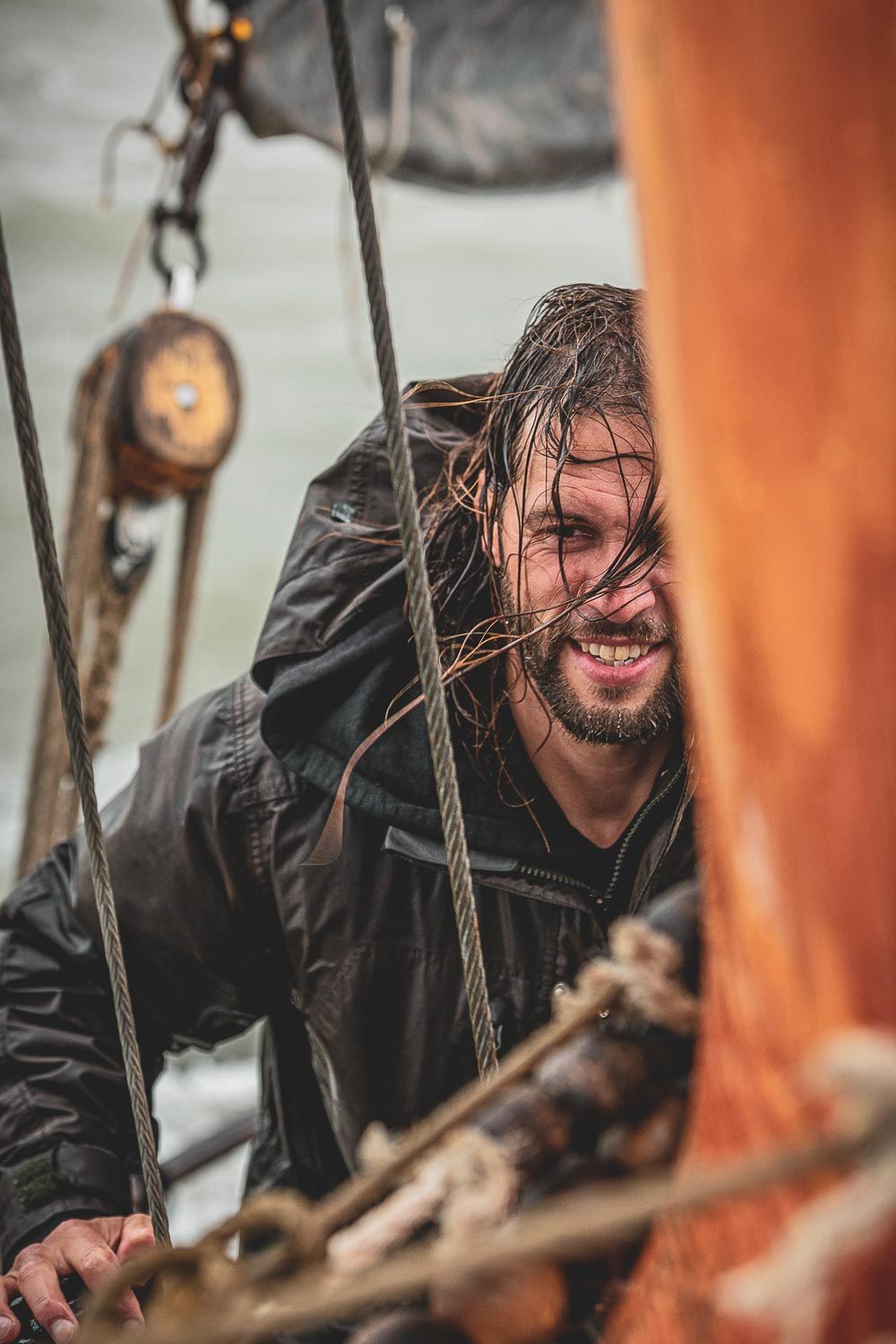 A UNIQUE FINDING
In the evening, of course, the tall tales are told. The story of the Lutine, for example. This ship sank once upon a time between Vlieland and Terschelling. On board: 300 million euros in gold. There have been several attempts to retrieve it, Henk says, but to date they have never succeeded.

“Do you know the story of the Dress?” I break in. Without success. No one knows the story of the Dress, “2016?” I try. “The dress was in a coffin, which had been unearthed from a wreck in front of the Texel coast and lay at the bottom of the sea for nearly four centuries. A dress of pure silk from the Golden Age. A unique find.”

“All forward!” shouts Henk. “And jump! The propeller bites in the sand and we jump, like Masai In the Kenyan highlands”

THE HORIZON IS PATIENT
I realize that the Wadden Sea is not easily navigated. How many ships have run aground or sunk, like the Lutine. The English and Spanish all ran aground there during old feuds. The Wadden Sea was our shield. Nowadays, anyone who gets stuck and can’t get loose will reach for his VHF radio. Skippers used to send up carrier pigeons when they were in danger of being sucked in by the sand.

We’ll get stuck too. On Day 2. We are on our way from Texel to Terschelling when the Boreas runs aground on a ledge. Unscheduled this time. “All forward!” shouts Henk. “And jump!”

There we are, eight people on board, pogo-ing on the foredeck of an old flatboat. Put some music on, I think, but we don’t get anywhere. We’re stuck. The propeller fights through the sand and we jump, like Masai In the Kenyan highlands.

There’s nothing else we can do. We’ll have to wait for the rising tide. Henk is also resigned to this and starts doing odd jobs on board. When he turns off the engine the silence is back. In the distance the bars of Terschelling beckon. But we’re in no hurry. On the contrary. The horizon is patient. 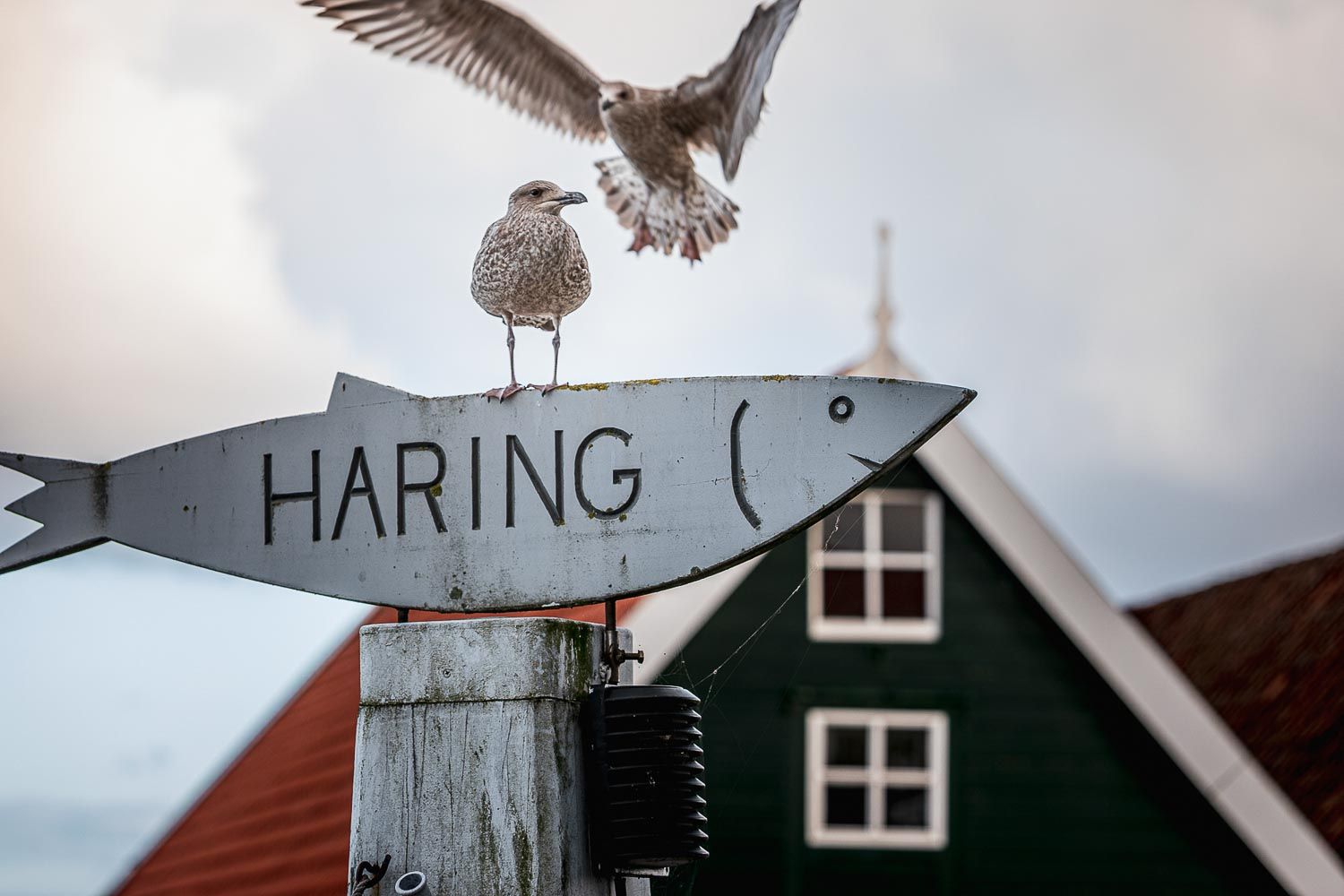 Sail along on the Wadden Sea!

Saved from the scrapheap by a handful of enthusiasts, the Brown Fleet – once intended for freight – has grown into an armada of some 500 historic charter vessels. A ship for every target group. There are magisterial three-masters and museal roundheads. And there’s the Boreas. A tjalk with a lot of luxury on board, such as private sleeping cabins, several showers and a kitchen with all the trimmings. Do you want to come along?