Along the shores of the Elbe
Saxony, Germany

Ever since freedom came in the German state of Saxony, there has been a constant flow of renovation and rebuilding. That is why, you can now marvel at the craftsmanship of the car builders, painters, winemakers and watchmakers around Dresden and Leipzig. Travel with us past the richness along the Elbe.

There where the Elbe enters Germany, the pine forest abruptly plunges in a 200-meter-deep ravine. In the valley, rock formations tower like windmills of stone, a few with a pine tree on top. The rock formation, the narrows, and panoramas seduced noblemen about 1000 years ago to build a fortress on the peaks. The remainders of Bastei, including the access bridge, now made of stone instead of wood, are still there, and the panoramas are equally stunning as the formations themselves.

Situated half an hour upstream is Dresden, the city where during Valentines night 1945, so many bombs were dropped that very little of the Altstadt was still upright at sunrise. As a way of non-violent demonstration, the ruins of the Lutheran church, the city palace, the opera, and the orangery Zwinger remained untouched along the Elbe for decades. Sheep grazed among the ruins until the Iron Curtain fell and the drift to rebuild raged. And even though the masonry work, carpeting and restoring hasn’t come to an end, Dresden’s sweethearts have been brought back to life. 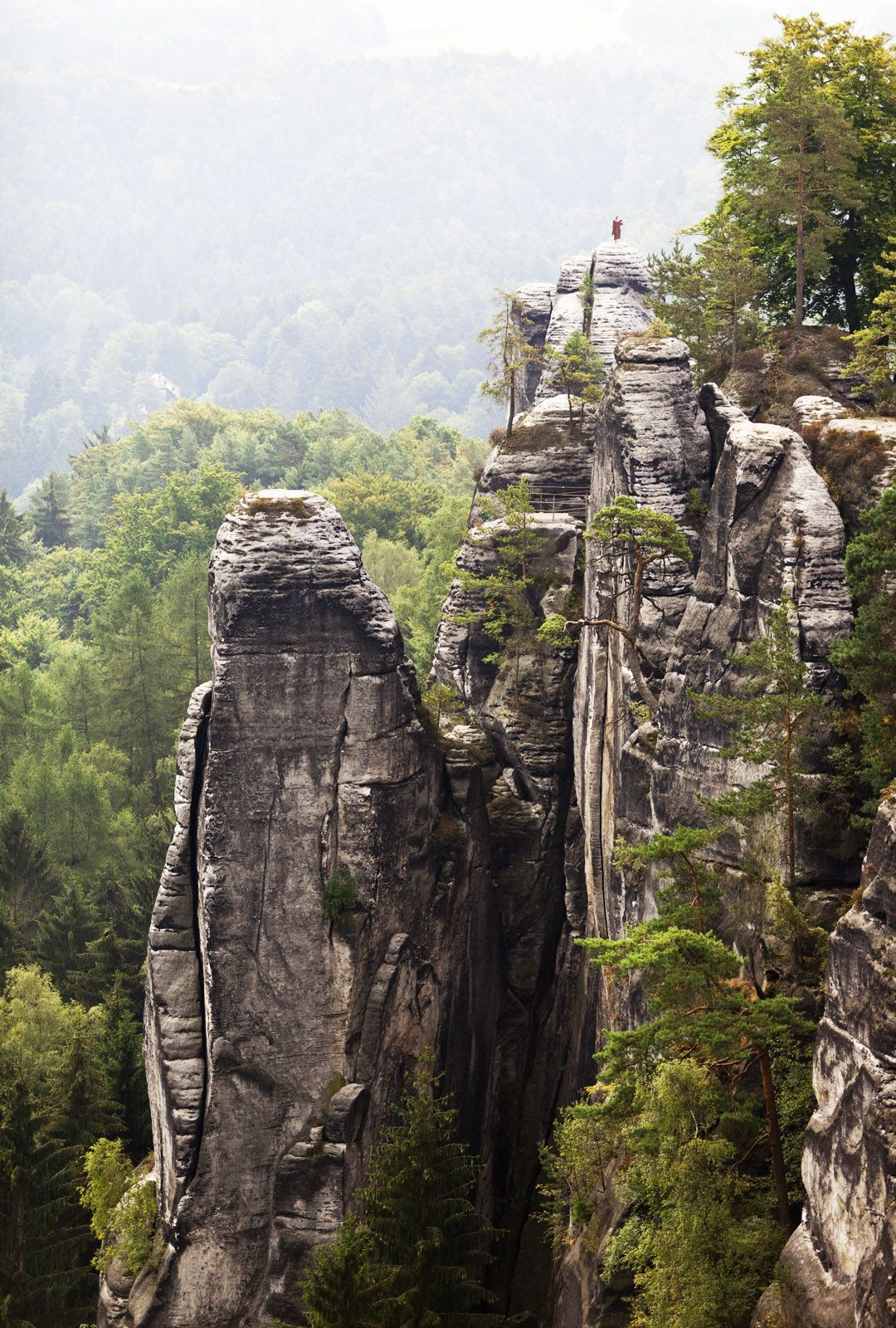 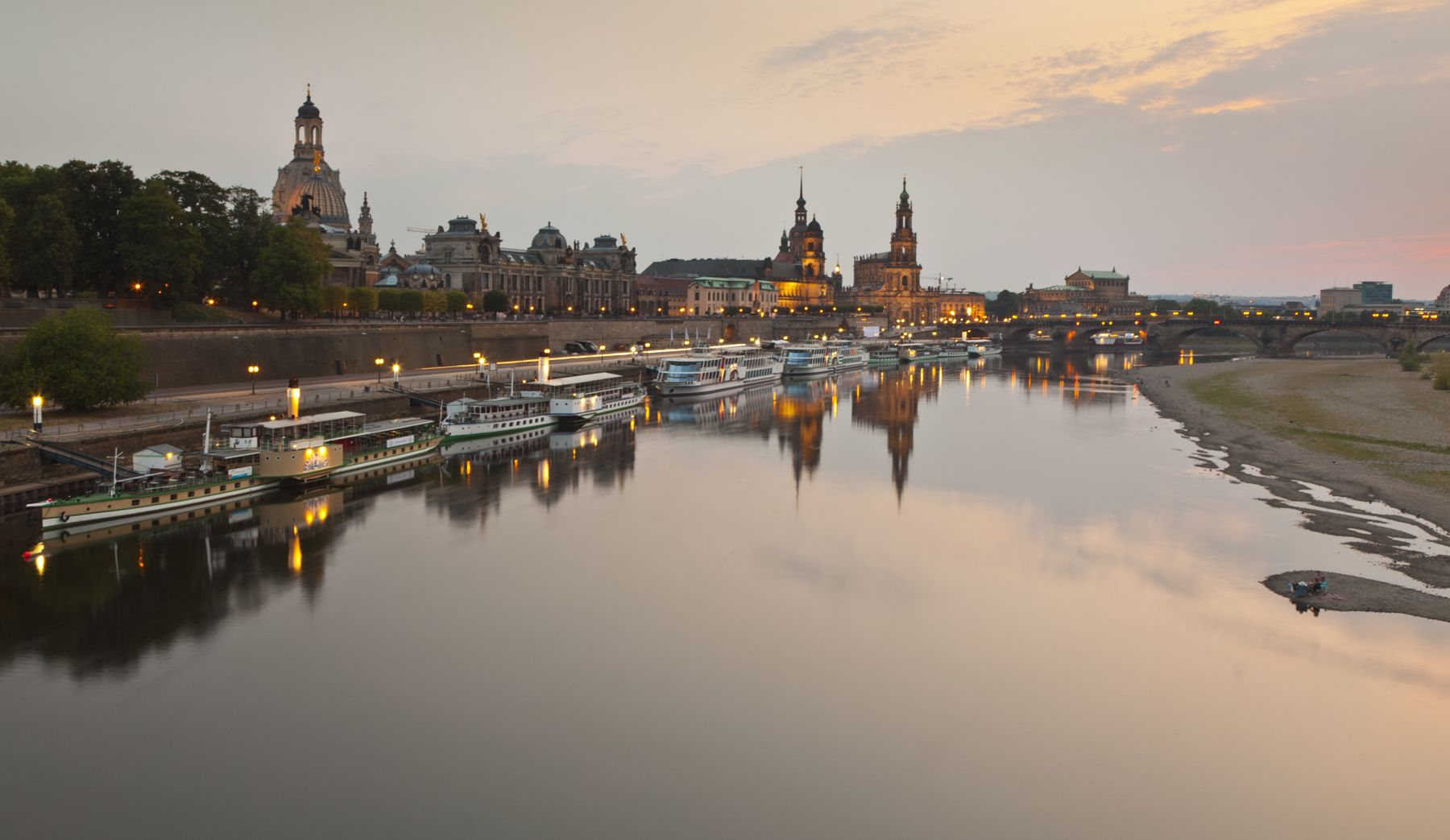 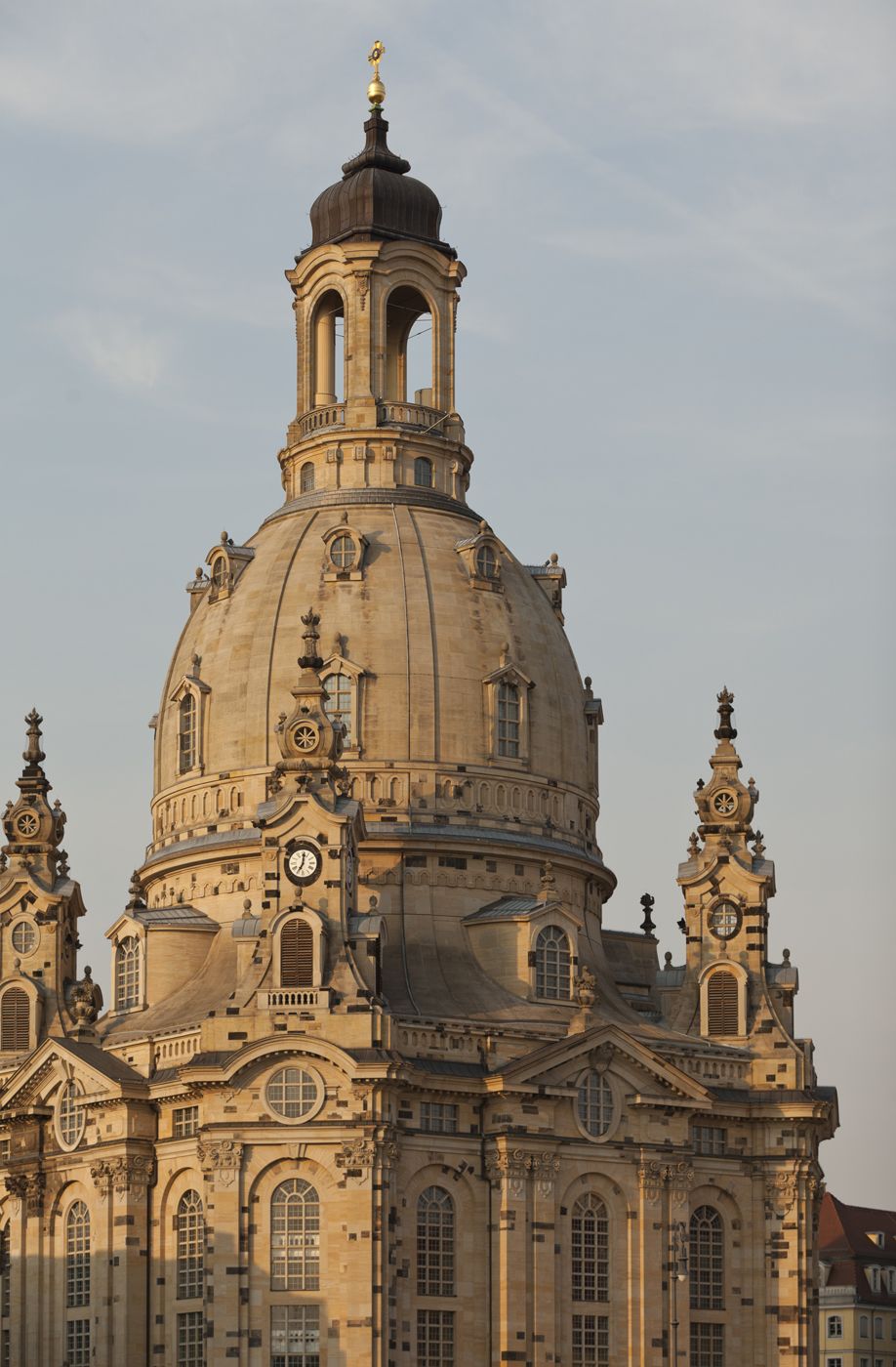 Even though not a single façade around the Frauenkirche is older than 20 years, some stones of the church are. Sandstone blocks were taken from the debris and, after some puzzling, have found their original place. The Residential Castle, just a street away, houses the art treasures that didn’t perish in the war. Jewels, silverware, paintings and other valuable artefacts were locked away safely in Köningstein fortress – quite a few turns further along the Elbe – but now shine in the treasuries of the palace. For example, The Throne of Grand Mogul Aurengzeb, a piece from India containing more than 5000 diamonds, rubies, emeralds, and pearls, is one of the reasons any time you take to visit the museum will be too short.

Check out the Throne of Grand Mogul Aurengzeb, containing more than 5000 diamonds, rubies, emeralds and pearls.

On the other side of the street, we find Zwinger, a baroque styled orangery in a courtyard, characterized by fountains, statues, flamboyant corridors and passages. Moreover, on the north side of the garden, we find a sculpture gallery with Vermeer’s and Rembrandt’s hanging from the wall. Nevertheless, the piece de résistance is the Sistine Madonna by Raphael: the world-famous canvas with the two angels. 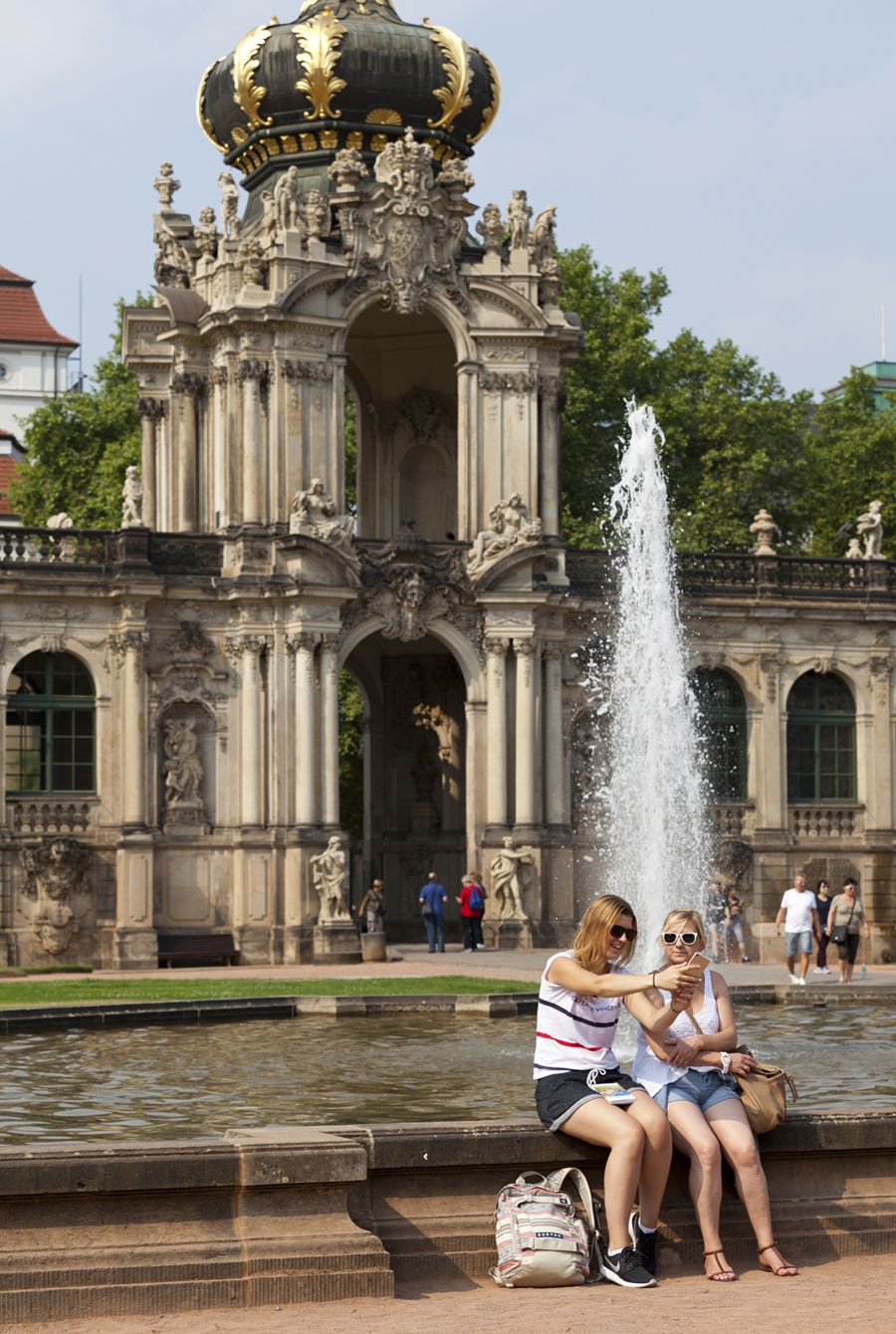 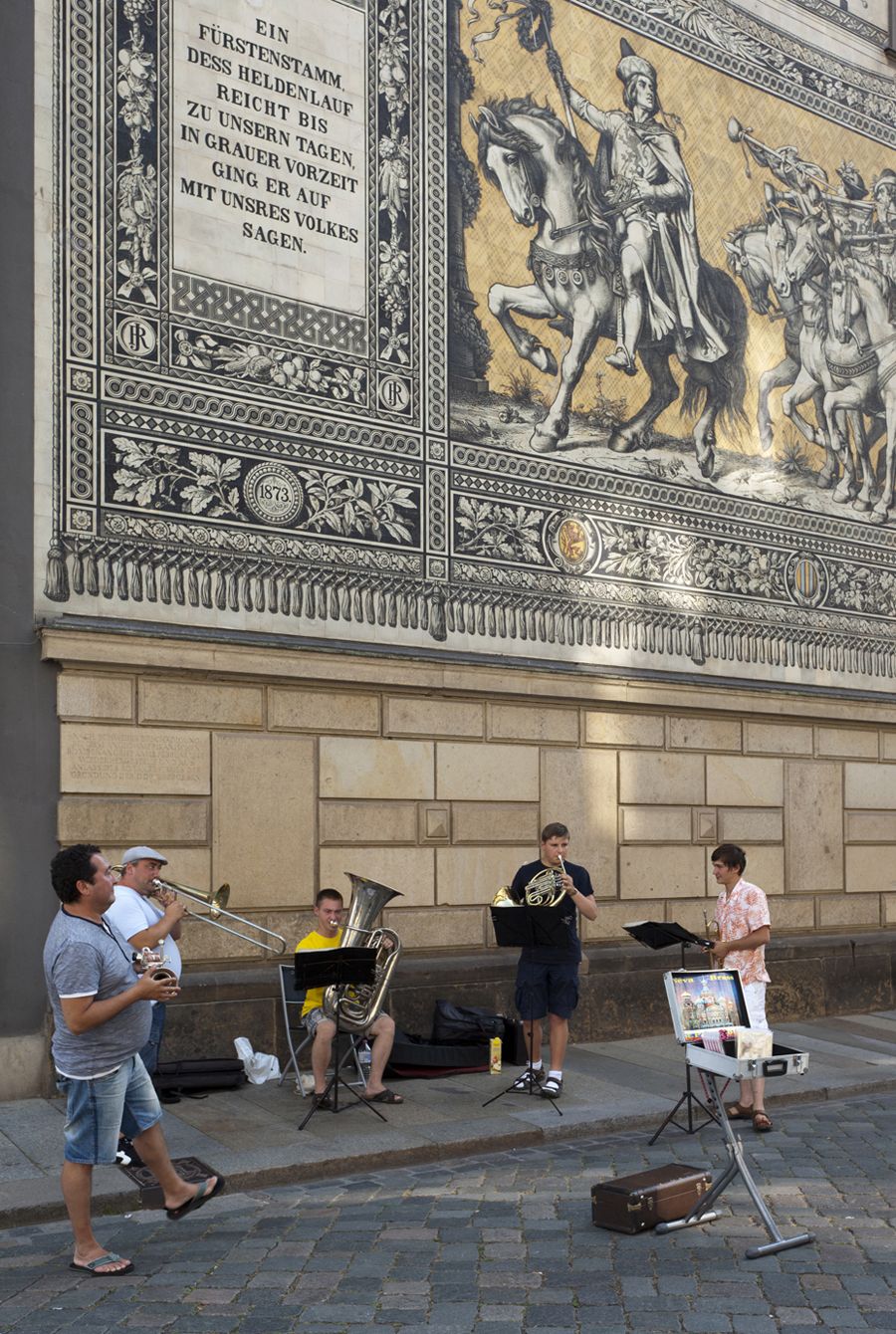 Head down to the wine region

Saxons are proud of their wine, and not even an hour away from Dresden by boat, still on the Elbe, we find the wine region. In the heart of the Sächsische Weinstrasse, around the village of Radebeul, the area is teeming with grapevines and majestic castles. And contrary to other regions, the vineyards are modest in size, making it easy to hop from one winery to the next. Don’t skip Schloss Wackerbarth, where both the grapevines and the lawn around the fountains are groomed with nail clippers.

In the GDR-era, everything was about hectolitres

A few kilometres further on lies the vineyard owned by Karl Friedrich Aust. Karl is a young winemaker who prefers to stroll past his grapes in T-shirt and shorts. In the GDR-era, everything was about hectolitres, and that’s why Karl repaired the stone walls in the yard and planted new grapes. On to better wine, his motto goes. That is why he opened a wine café in his parental home, as tiny as a stamp, where you can taste his sincere wine.

Do you see a waving red flag and a broom at the front door? That means a wine café or cellar is open. During Tage des offenen Weingutes (24th and 25th of August), around 20 winemakers open their cellars, and busses drive by the wine houses all day and evening. Weinkeller Goldener Wagen, Hoflössnitz and Karl Friedrich Aust are all within 5 minutes walking distance of each other. There are also various cycle and walking routes through the Weinstrasse. 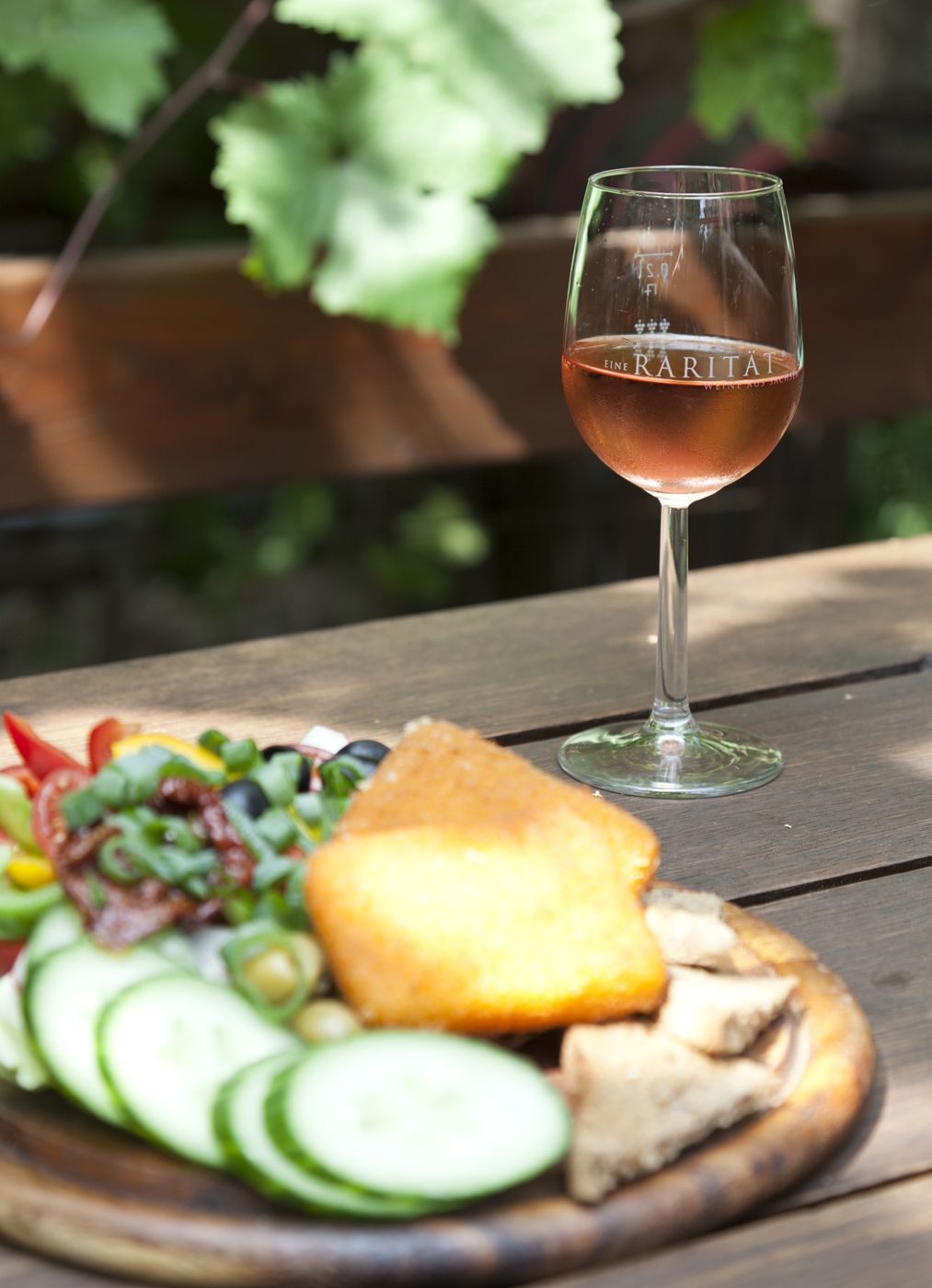 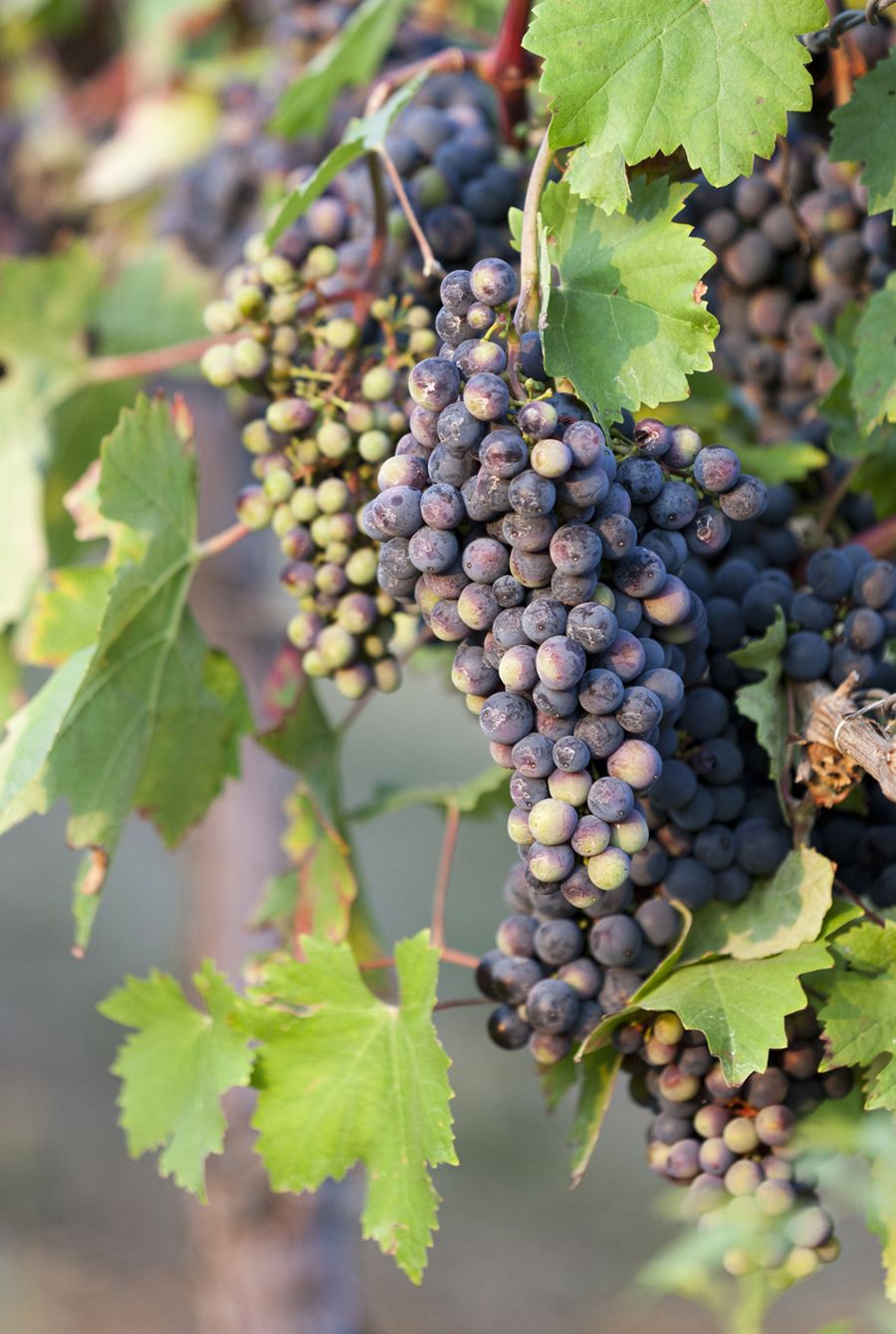 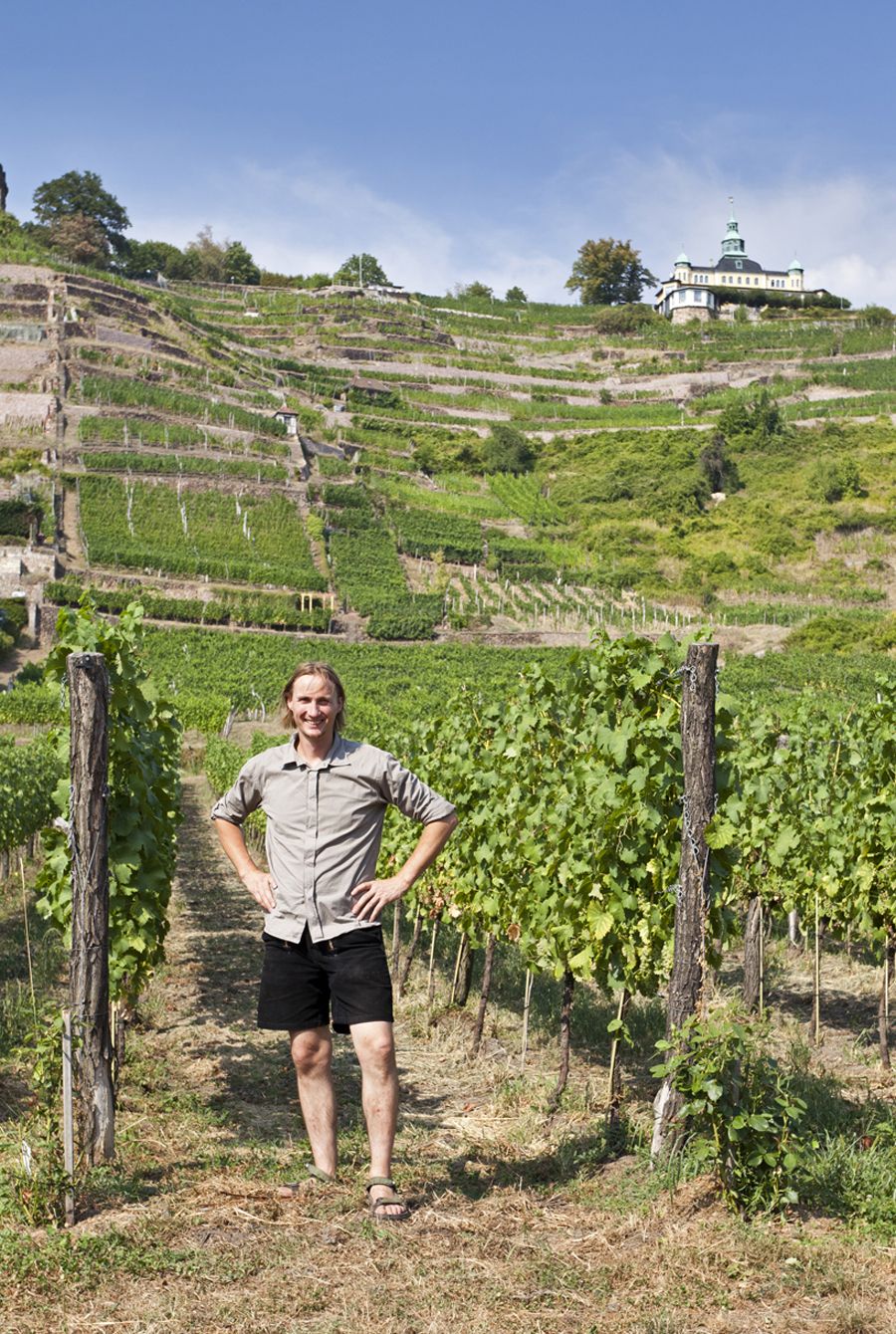 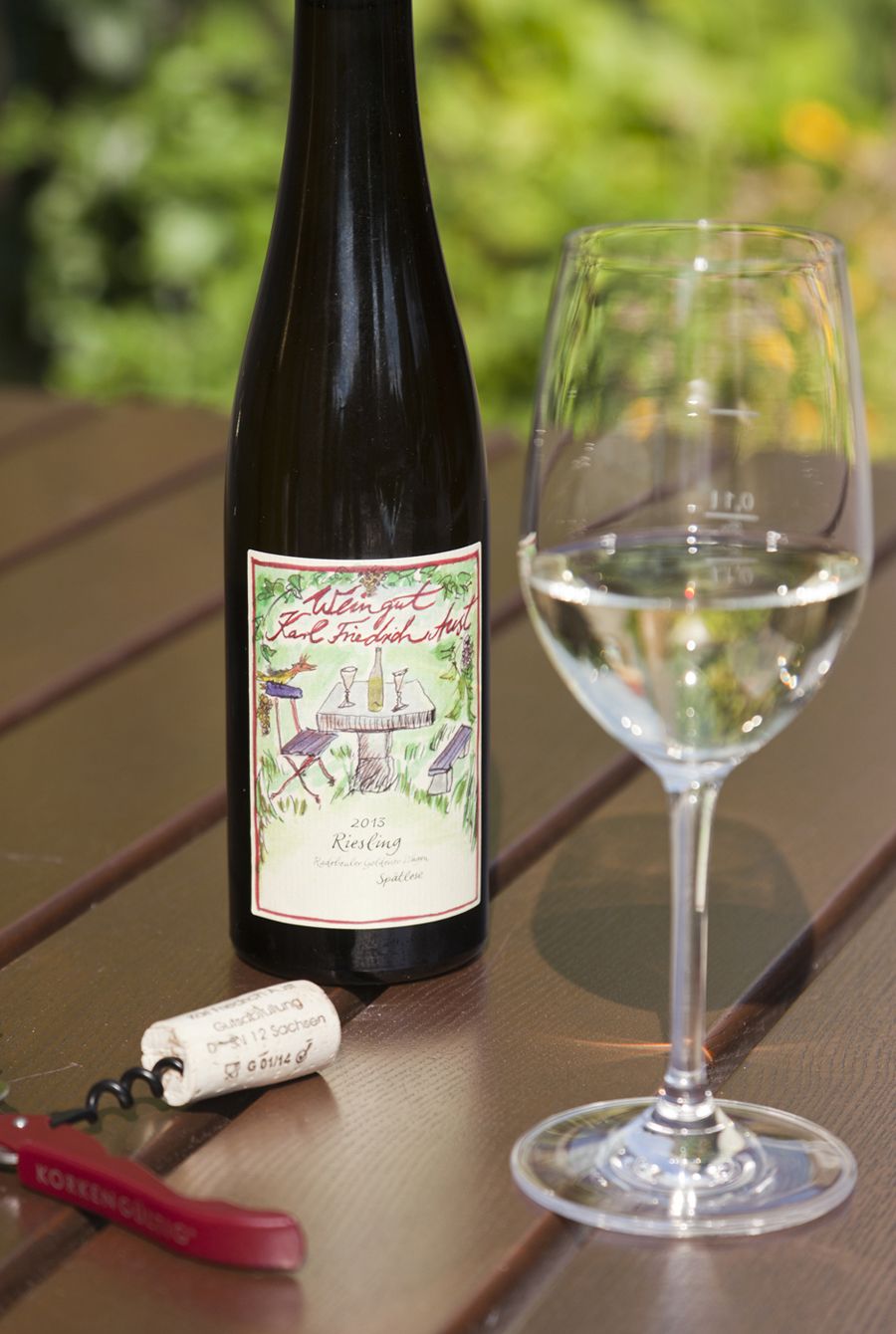 From exclusive sports cars to mechanical watches: the craftsmen of Saxony make it. At these places, you can even take a look. 1. Cars for the people

A car fanatic? In the heart of Dresden, you can find the transparent factory of Volkswagen, where they are currently making the E-Golf. Curious how they drive? You can discover the city in an electric Golf. Somewhat more exclusive cars roll out of the factories of BMW and Porsche, a little further in Leipzig. Even though you cannot take those cars for a spin, these factories are open for visitors. 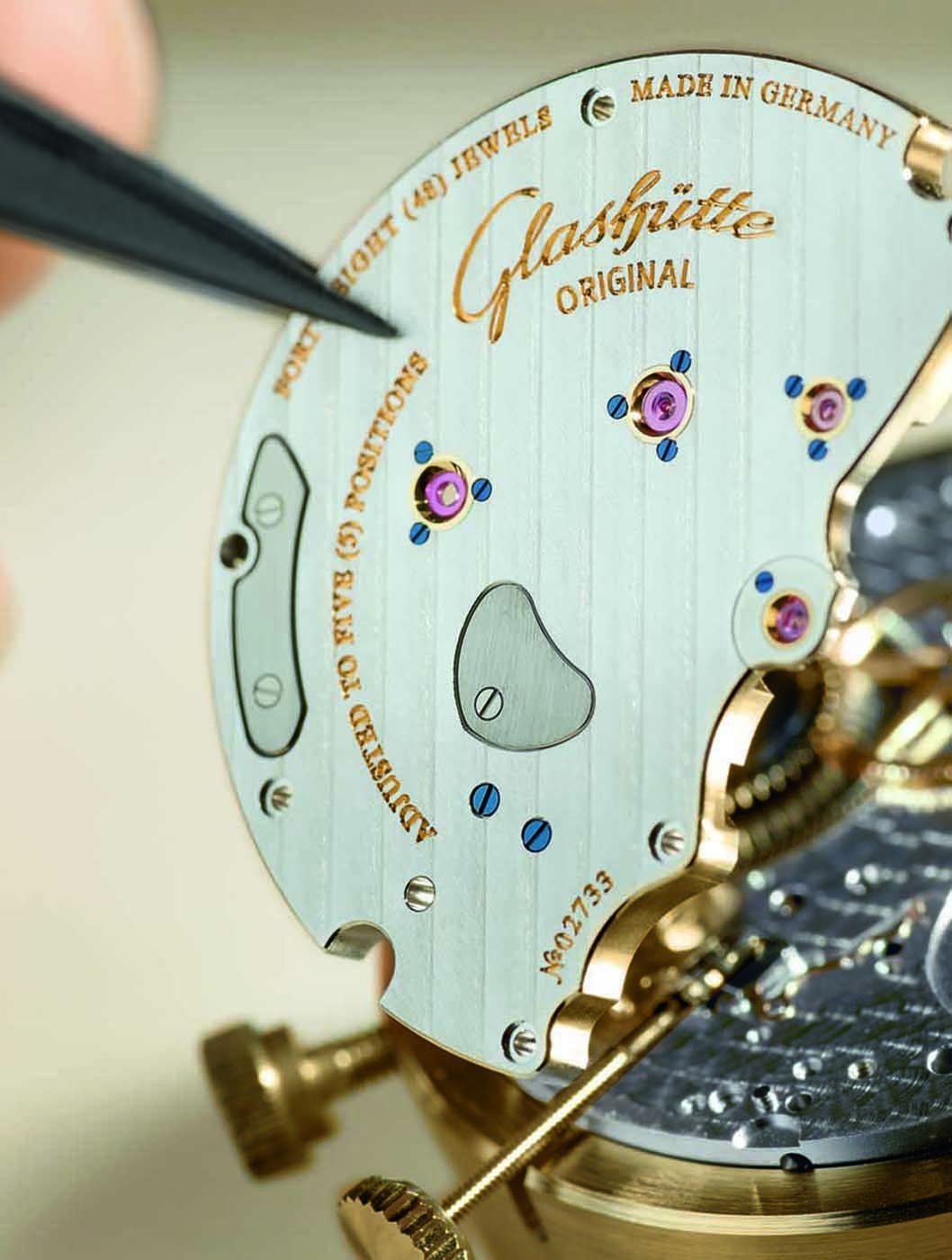 In Glashütte, south of Dresden, you can find craftsmen that have been making mechanical clocks and watches for many, many years. The designation of origin is protected, and that shouldn’t be a surprise considering the exquisite quality the 10 watchmakers here strive towards. In the former professional school in the village, you will find a museum, and some watch ateliers always keep their doors open. 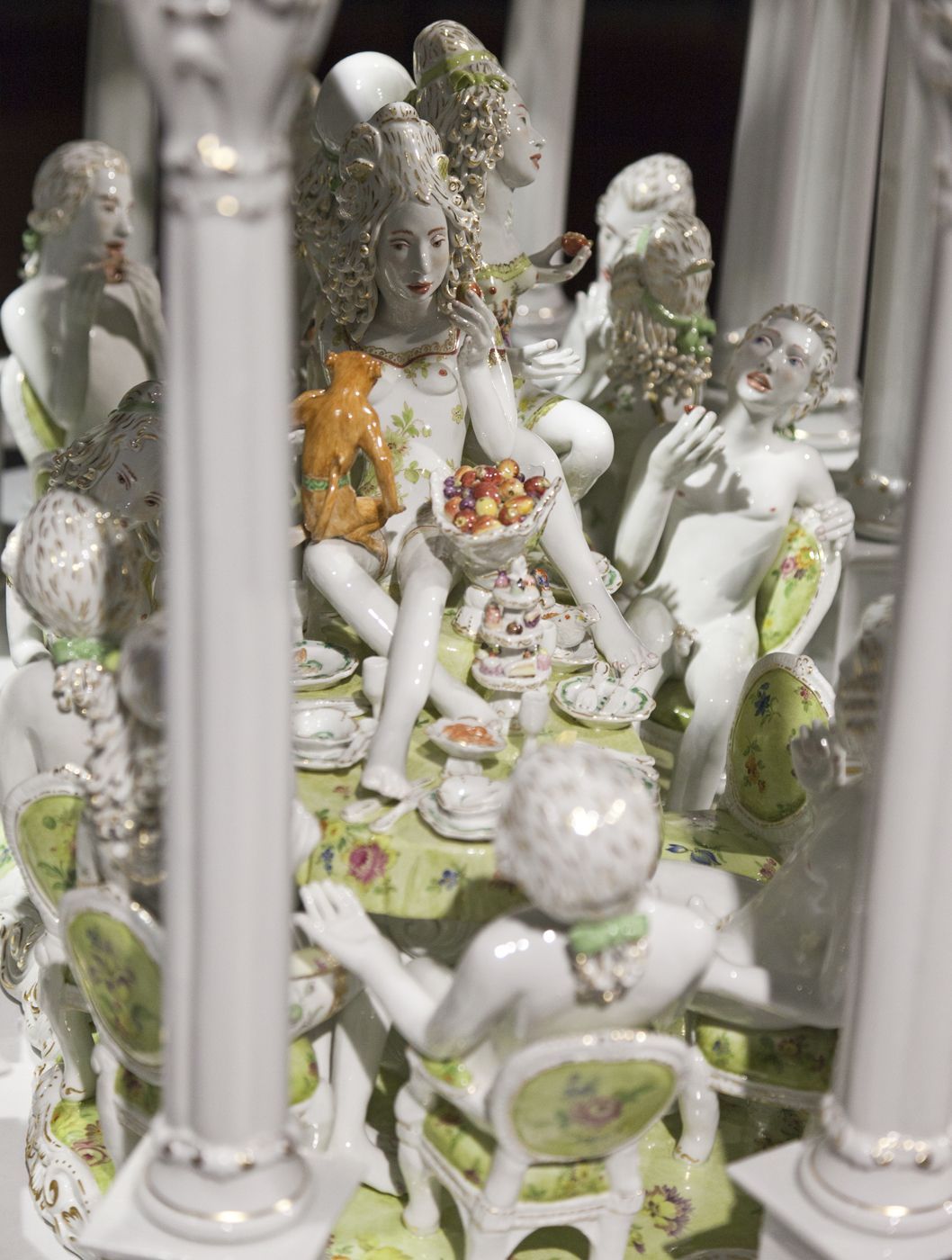 About 3000 years ago, the first European porcelain factory opened in the fortress of Meissen, near Dresden. Up to this day, villagers paint their porcelain by hand. Don’t forget to take a look at the space with modern art, where artists from all over the world hold expositions.

For example, you can see ‘Die Ehretempel’, where women, amidst naked men, sit at a table eating forbidden fruits.

You have to leave the Elbe for it, but Leipzig is a city unlike any other. Like Vienna and Paris, it was the music city of Europe: it was home to Liszt and Schuman, and the birthplace of composer Mendelssohn. Many buildings are reminiscent of those times, like the opera building on the Augustus Platz which, like the post office next to it, is a GDR-building pur sang. Both buildings are situated in a belt of lawns, fountain ponds, memorial sites and trees surrounding the city centre.

The centre is a remarkable melting pot of architectural styles

The centre is a remarkable melting pot of architectural styles. You pass by buildings from the Renaissance and see plenty of Jugendstil. The modern university auditorium has a Dutch touch to it: the distinctive combination of church and auditorium (see photo above) was designed by the Dutch architect Erick van Egeraat. At certain places in the Nikolaistrasse, you can see heads of wild animals in the facades, referring to the furriers that used to be based here. In the heydays, there were 800 of them, making Leipzig the fur capital of the world. The prosperity of the city is also obvious in the trade fairs that were held in the magnificent malls, like Specks Hof.

Also amazing are the eclectic murals by Michael Fischer, reminiscent of the peaceful protest against the Wall. The fall of it was actually due to the grass-roots resistance in Leipzig. They made sure that the border crossings in Berlin were re-opened. That is why the city of liberty celebrates the Lichtfest yearly on 9 October – celebrating 30 years this year.

Are you visiting Leipzig a little before that, between June and September, the Markt welcomes you with bierstubes and stalls. While you are tasting some grilled salmon or mushroom-scrambled-egg, you will undoubtedly find a band performing. From classical to jazz to cross-over, Leipzig can be heard practically every summer night. 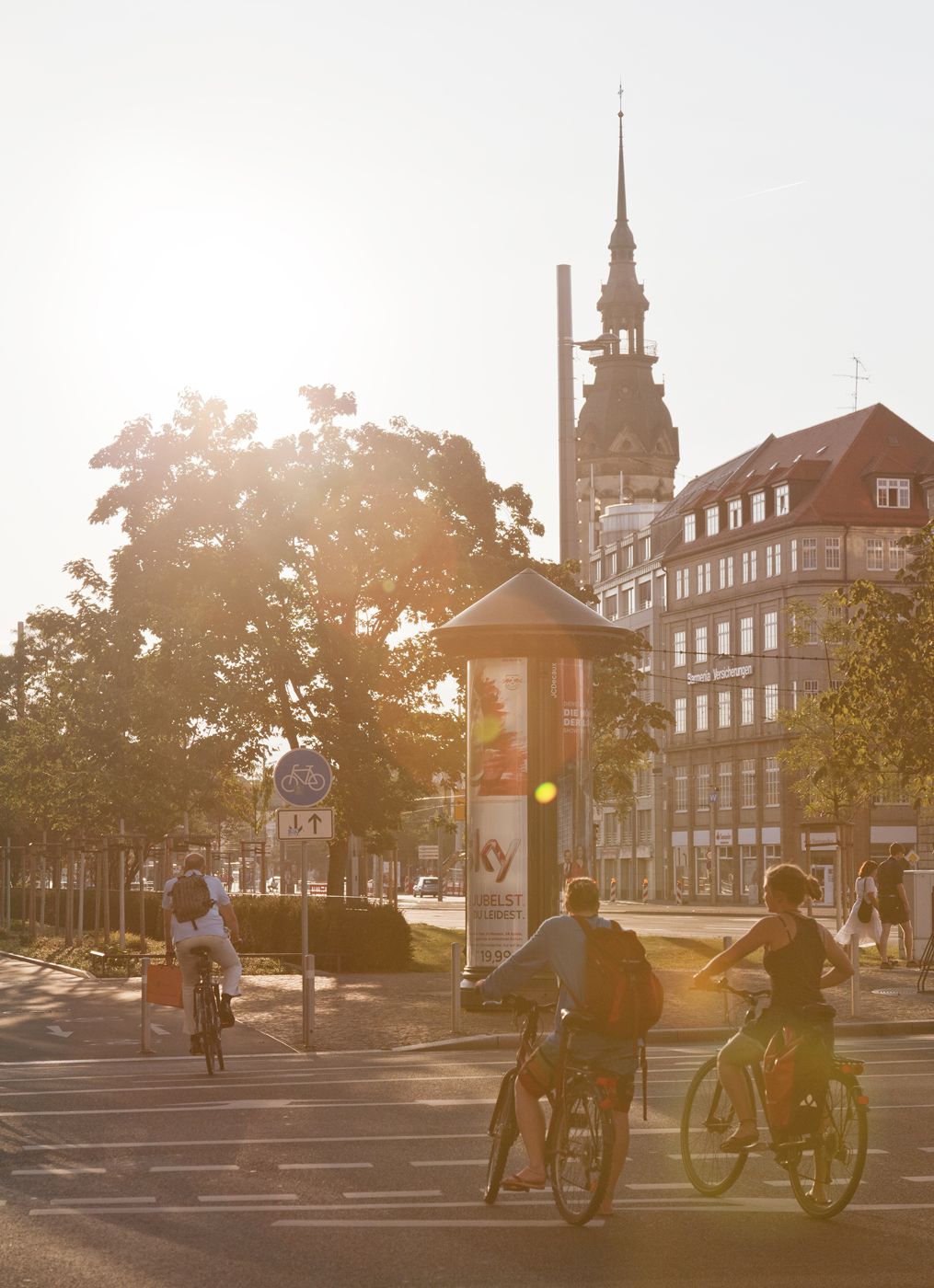 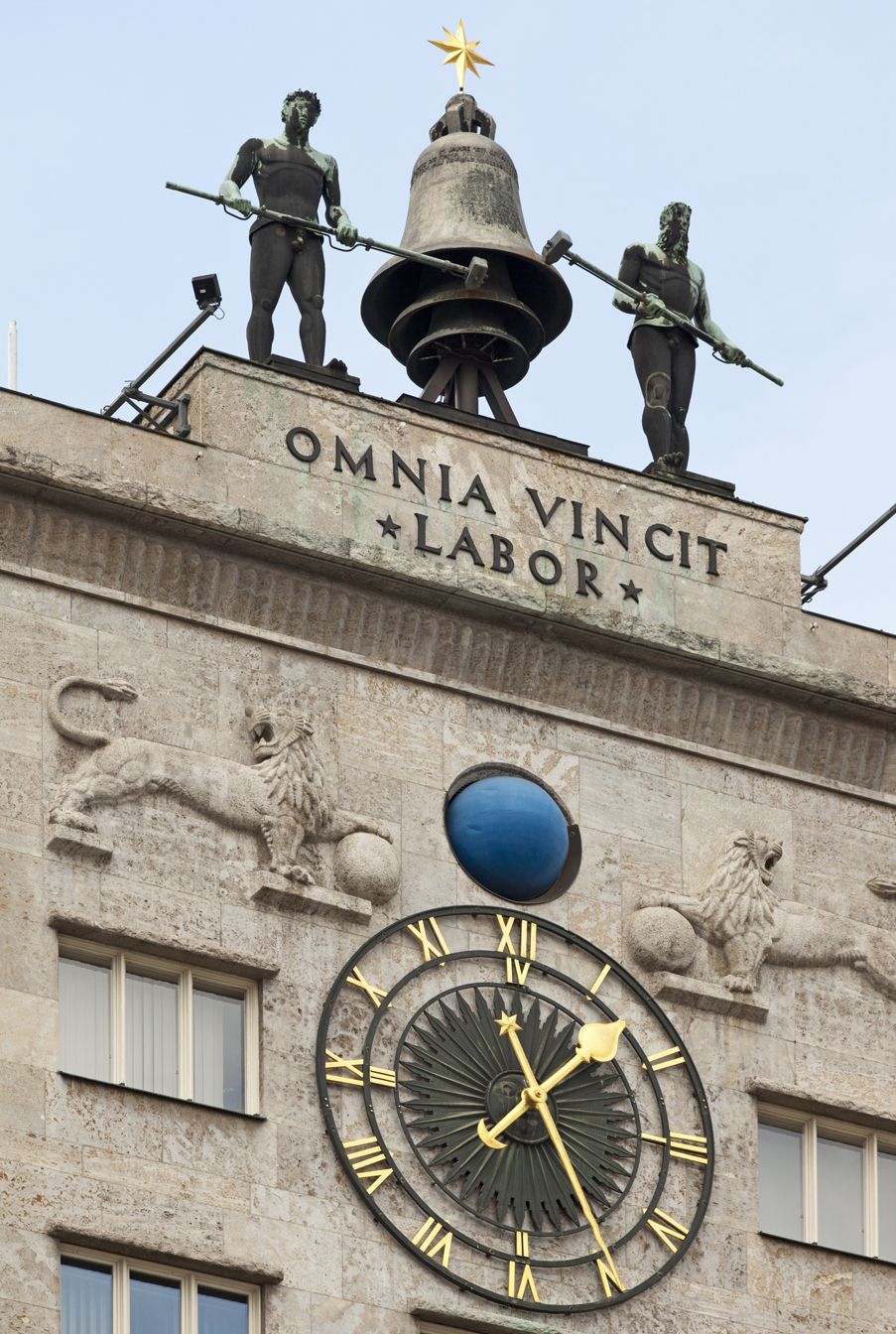 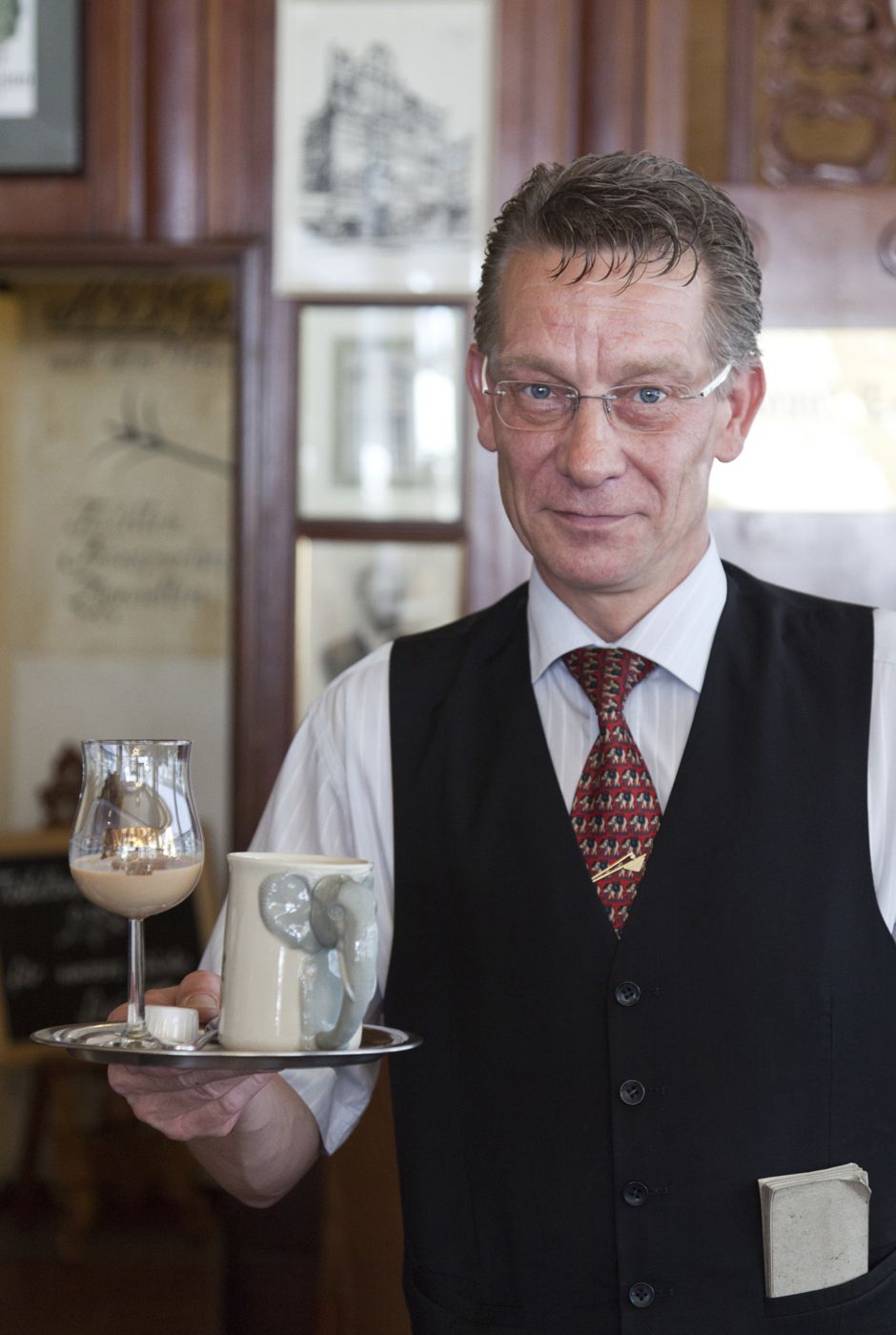 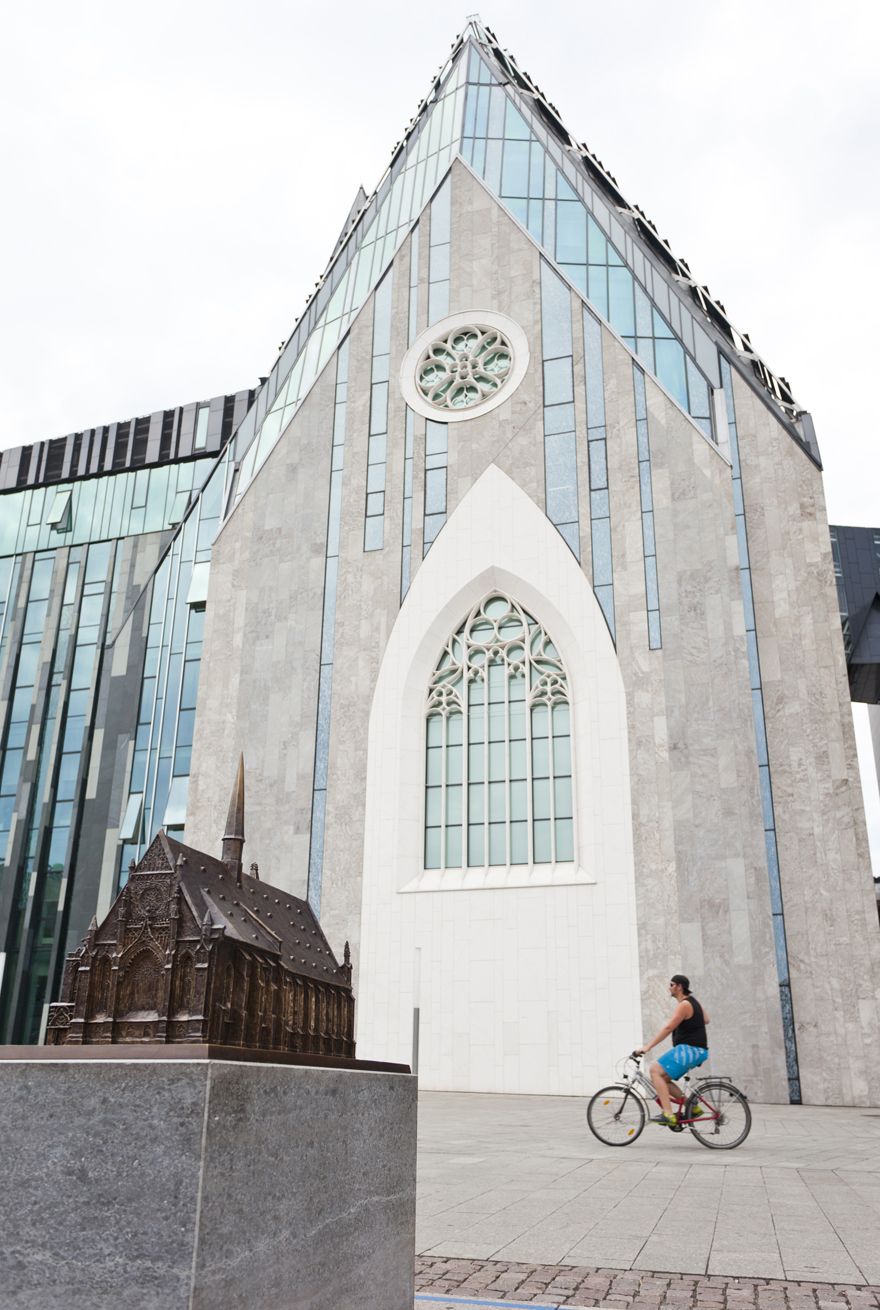 Saxony is about 600km from Utrecht in The Netherlands, about 8 hours by car. Or take the ICE train or even a direct flight from KLM (1 hour).

Take a historical boat tour over the river. Check out Saechsische-dampfschiffahrt.