The Swedish destination for foodies
Flavours of Skåne

Produced locally and eaten on the spot. If you love sustainable and delicious food, you have to go Skåne, Sweden’s most culinarily delightful province

A Smile. “Coca-Cola? No. You can’t buy that here” says Johan Carlsson, the owner of Kaffestugan Alunbruket, one of the oldest coffee cottages in Skåne. Living here is like a fairy tale; the sun is shining, the gardens are full of hollyhock, and the grass is lime green. I hear the clinking of coffee cups. The two girls serving us look like the two younger sisters of Alice in Wonderland. We are in Skåne. Ordering Coca-Cola here is like cursing in church. In Skåne they drink homemade smoothies made from foraged fallen fruits. People from Stockholm come here for that reason in particular. Apart from the smoothies they also come here for the beer, the meat, apple juice, and the herbs. Everything tastes better in Skåne.
Johan’s great-grandmother used to run the restaurant, and in 1930 she opened its doors to everyone who loved to eat great food. Respect your elders. As her great-grandchild, Johan still enjoys all her recipes, including wienerbröd, a type of bun. “I’ve been eating it for 45 years, and I still love it! Wait…” Johan steps away from the table. “I will bring you one so you can taste it.”
Tasting. That’s the magic word here. Skåne is the testing ground of Sweden when it comes to food and drink. We visited five tastemakers to experience their skills. 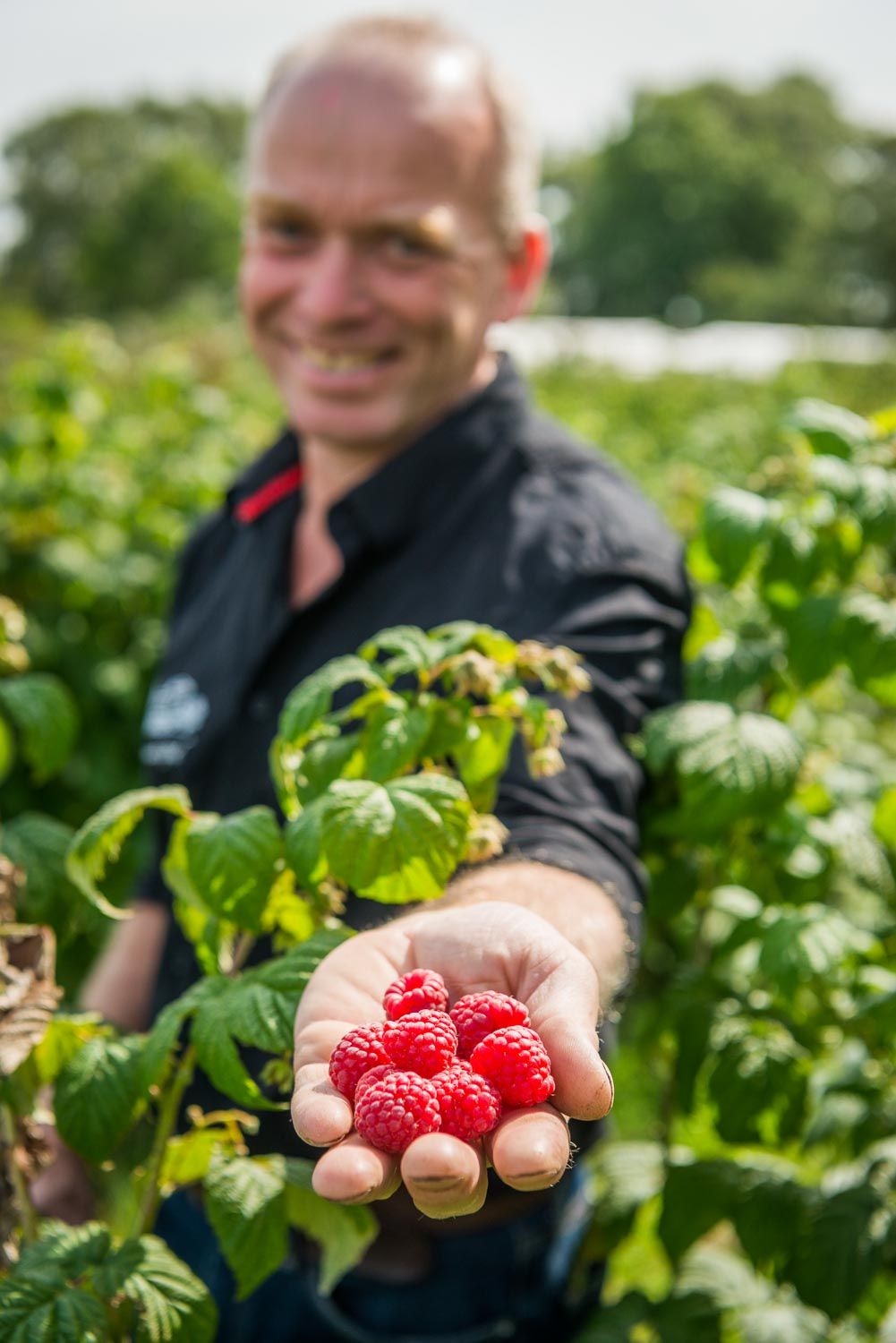 “Cherztin has won an award for her icecream”

Skåne is the Ukraine of Sweden; this is where the grain grows. Alongside the grain herbs are growing everywhere, and married couple Cherztin and Anders Persåkre gather them. The herbs grow and bloom in their fields, and they will find their way into the most delicious meals: tarragon, sage, dill, mint. You don’t have to tell a Michelin-starred chef what to use. Using the right herbs makes the perfect meal.
The wild kitchen. The average chef has a healthy obsession for aromas, and when he notices them, he wants to pin down their taste. Just like Cherztin and Anders. One of their regular customers is standing in the store, and the man knows exactly where each spice is located. You will always find pocketbook plant
in his basket, a typical Swedish herb. You can find Cherztin at the back of the store, where she is making ice cream for us: flavoured with the saffron straight from her own garden. Cherztin is too modest to say it herself, so her husband tells us: “she won a prize with her ice cream.” They both blush. 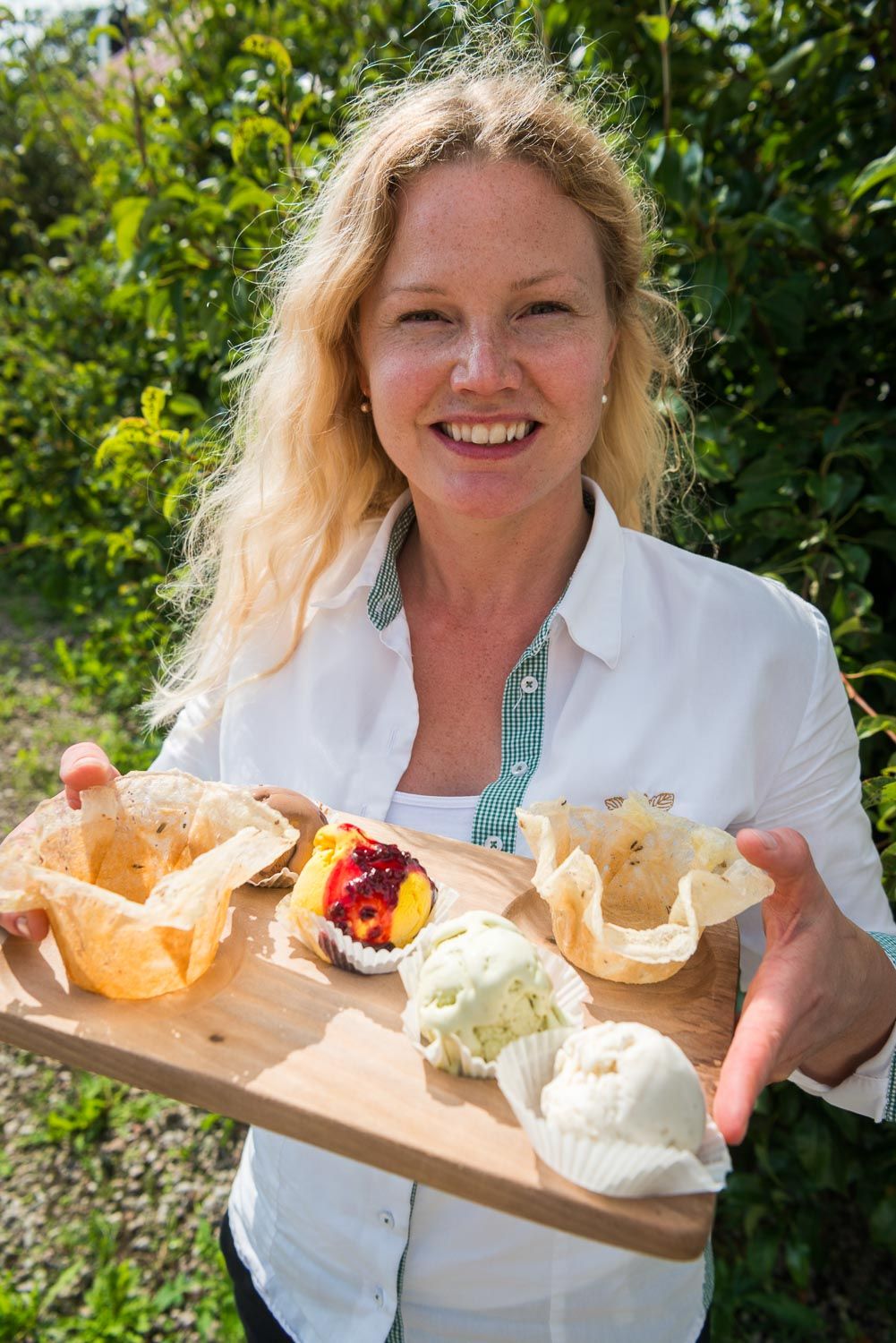 “A hobby that got out of hand”

Håkan Nillson seems a bit surprised by our arrival. Then he remembers: Oh yeah, National Geographic, of course. Come inside.
The man clearly has better things to do, such as brewing beer with water from his source. “My hobby got a little bit out of hand”, Nillson explains. Before all of this Nilsson used to be a chicken farmer, the fifth generation in a family business that started in 1874. Håkan has been brewing craft beers since 2014. This type of beer is brewed traditionally by small independent breweries with environmentally friendly retro labelling. These breweries are the answer to the dominance of the big boys, who most of the time, only brew one type of beer.
“Are you striving for sustainability?” I inquire. Nillson laughs as my question; he likes to call it “common sense”. Shall we have a taste?
It’s only half-past nine in the morning, and we are working. But, luckily our work during this trip consists of trying everything, so we raise our glass – 2 fingers of foam. We nod contently. SKÅL!! 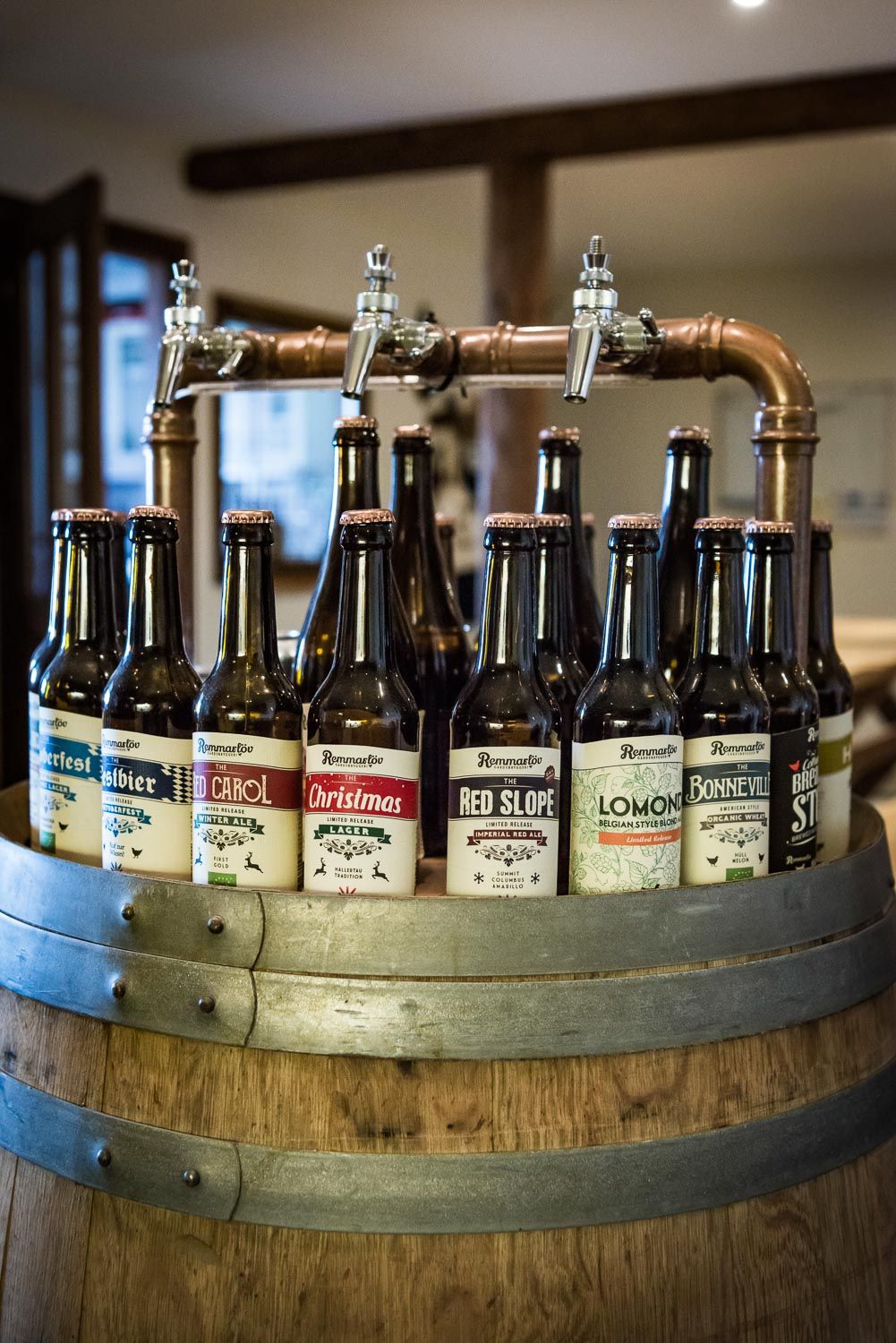 “Eating is our passion”

“I was thinking: how hard can it be? You put something in the ground, and it grows” Says Jon Lindberg. The son of a doctor, he started a vegetable patch in his back garden in 2016 intending to be self-sufficient. Jon has everything in his garden: red cabbage, artichoke, pumpkins, onions, blackberries and lupines. He has his wife Giovanna to thank for this. They met in London, both typical food lovers, and one day decided they were ready to leave their office jobs behind and move to Jon’s home country of Sweden. Jon’s uncle is a farmer, so he was always able to reach out to him with questions. “It was disappointing since my uncle works on a much larger scale”. What about Giovanna’s family? She is from Peru, and a lot of her family members are farmers. “I have called them a few times for advice, but in Peru the climate is different”. That is how they stated: through trial and error, but now everything is growing sky high. Leaving London and choosing this green paradise in Skåne was the best choice Jon and Givoanna both knew they were outdoor types. For now, the sun is shining, but I can imagine winter around me: a drop of dew on the end of your nose, low-hanging fog and two boots plunged deep into the mud. Such dedication. If necessary, the couple will pluck burnet from underneath the snow. Yet it rarely snows in Skåne: the mild sea climate makes this region in Sweden perfect for a kitchen garden.
Jord&Bord
Hävdavägen 63
jordbord.se 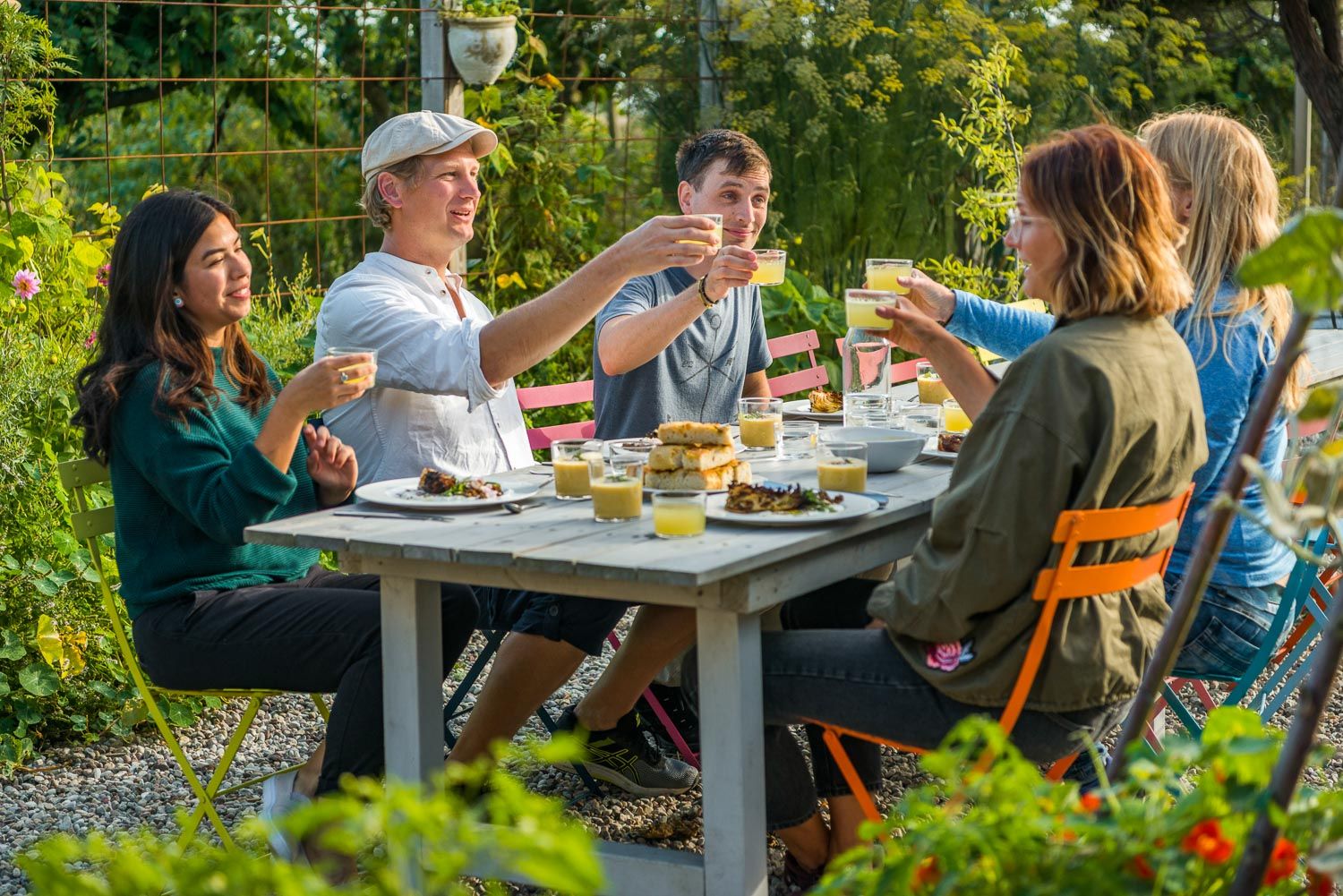 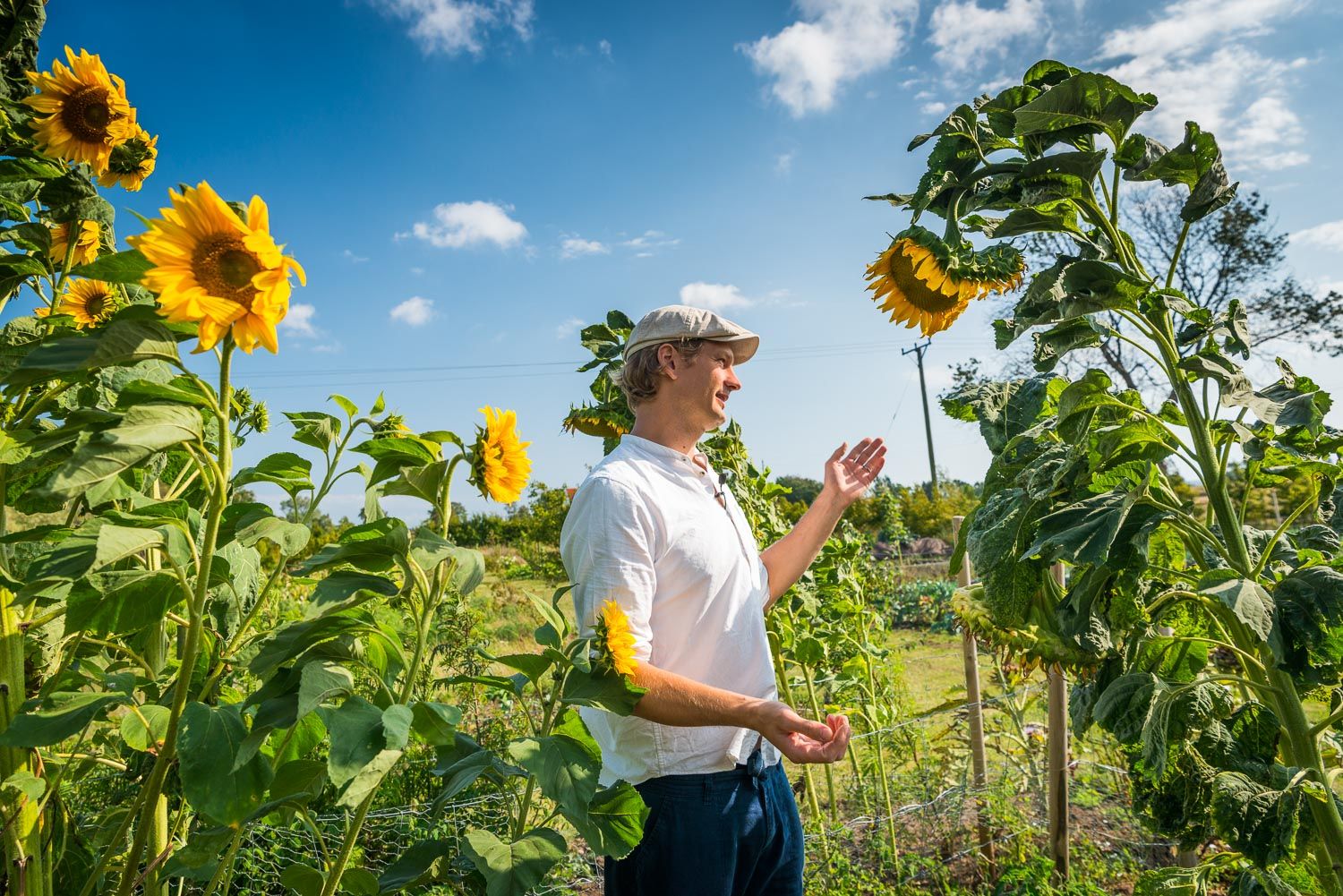 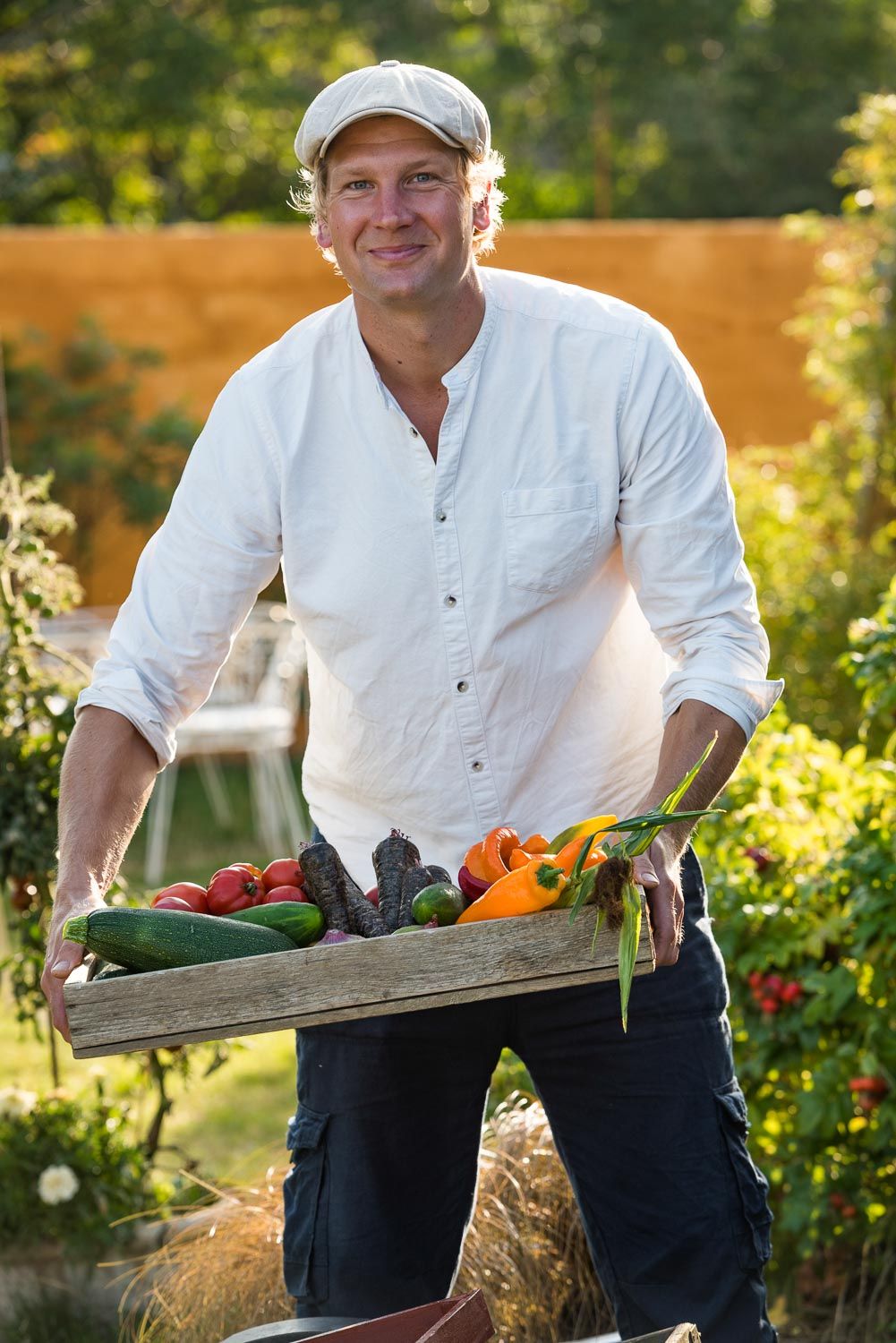 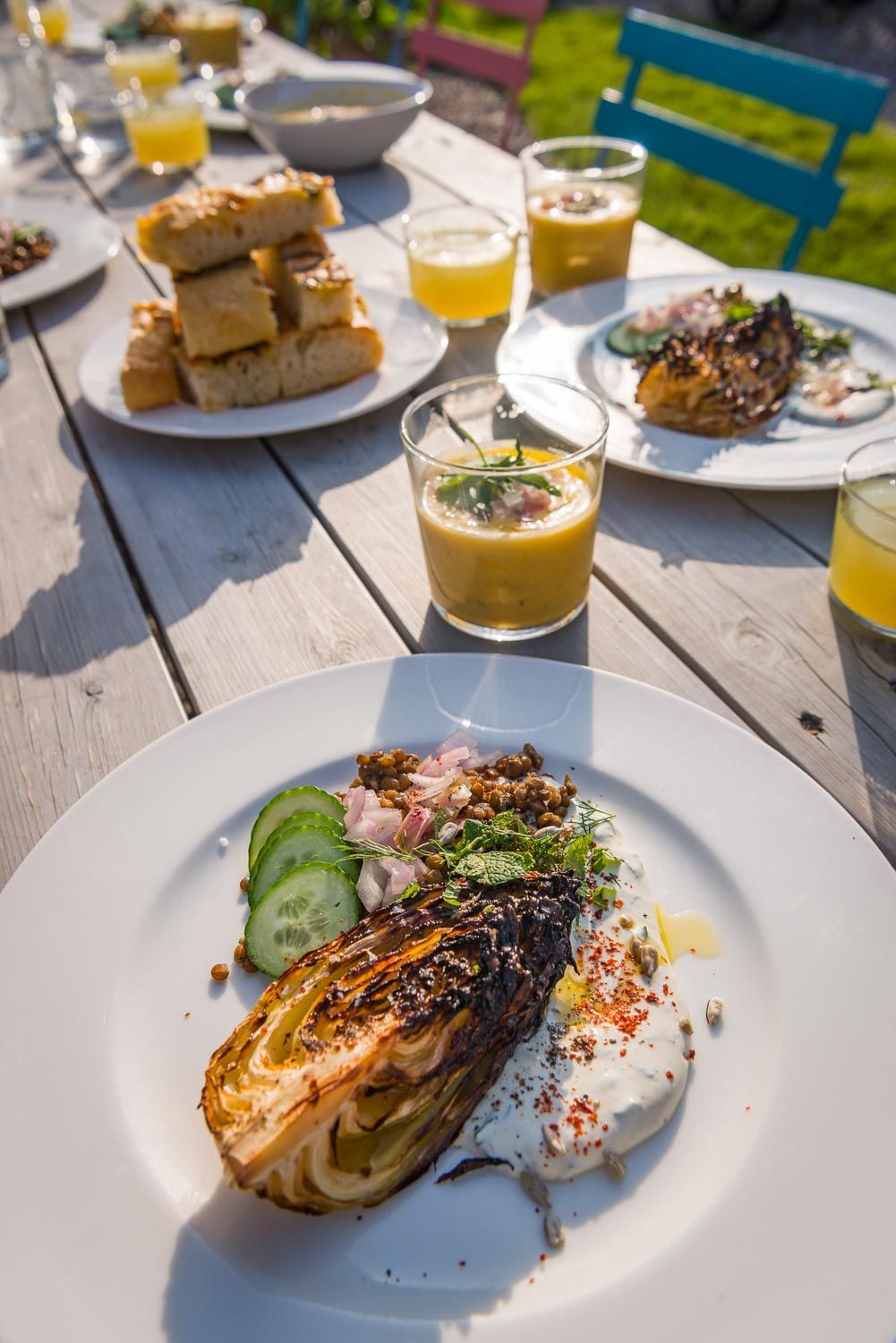 “Hey, what’s that I hear?” I am walking together with Elisabeth Knöppel through her apple orchard full of characteristically old trees. I hear the same as she does: a muffled sound of apples falling into a wooden box. It turns out that one of the pickers is handling the apples a bit too rough. “harvesting apples should be silent”, says Elisabeth with a serious look. “If you can hear a sound, the apples could be damaged”. In the meantime, she picks an apple from the tree. She looks at it with admiration, as if she has never seen an apple.
“You have to treat them like they are eggs,” she smiles. After that, she puts it in her mouth and picks me one too: a beautiful red apple, her orchard is filled with them. They are not meant to be eaten, by the way. Her apples will be pressed into juice. “You can tell”, she says and picks another apple. “My apples are not spotless. Eating apples cannot have any marks or blemishes nowadays. I’m not bothered by that. I can tolerate a couple of insects. My apples do not have to be perfect looking. I’m going for the best taste, the best aromas.”
We are dealing with a connoisseur here. “When I started – ten years ago – I was afraid that I was doing everything wrong. Did I give the trees enough water? Was I drowning them perhaps? But apples always do well. This is what they’ve taught me. Relax, take your time. That’s how I’m living my life now”.
A little later, we are standing in her barn. Elisabeth is tasting. She looks at the glass, closes her eyes and rolls her tongue. A blissful look. It is as if she is tasting a Grand Cru at a French Chateau.
Elisabeth is not just an ordinary apple juice maker; she is a champion, with two gold medals to her name. She makes Sweden’s best apple juice. An absolute must. 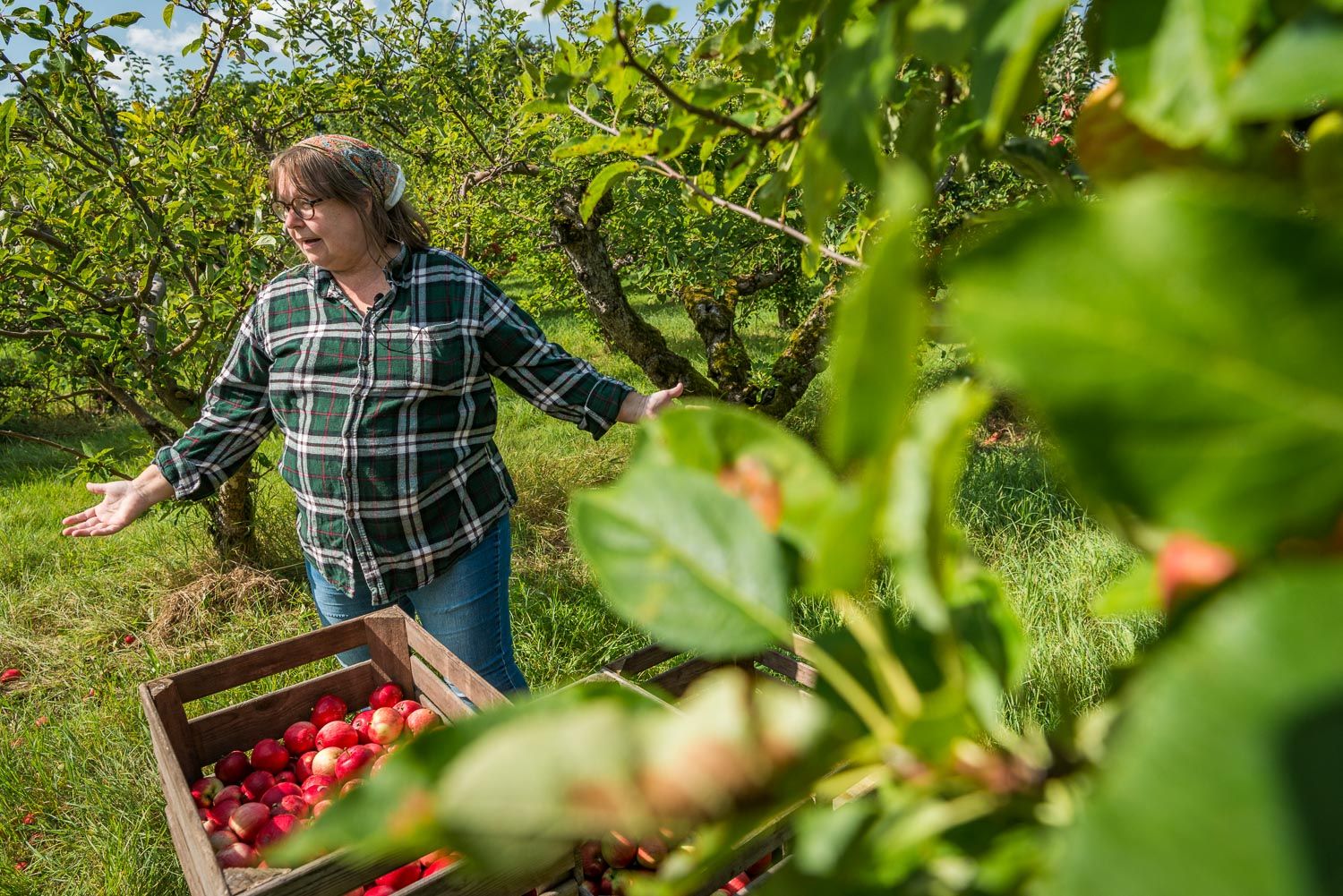 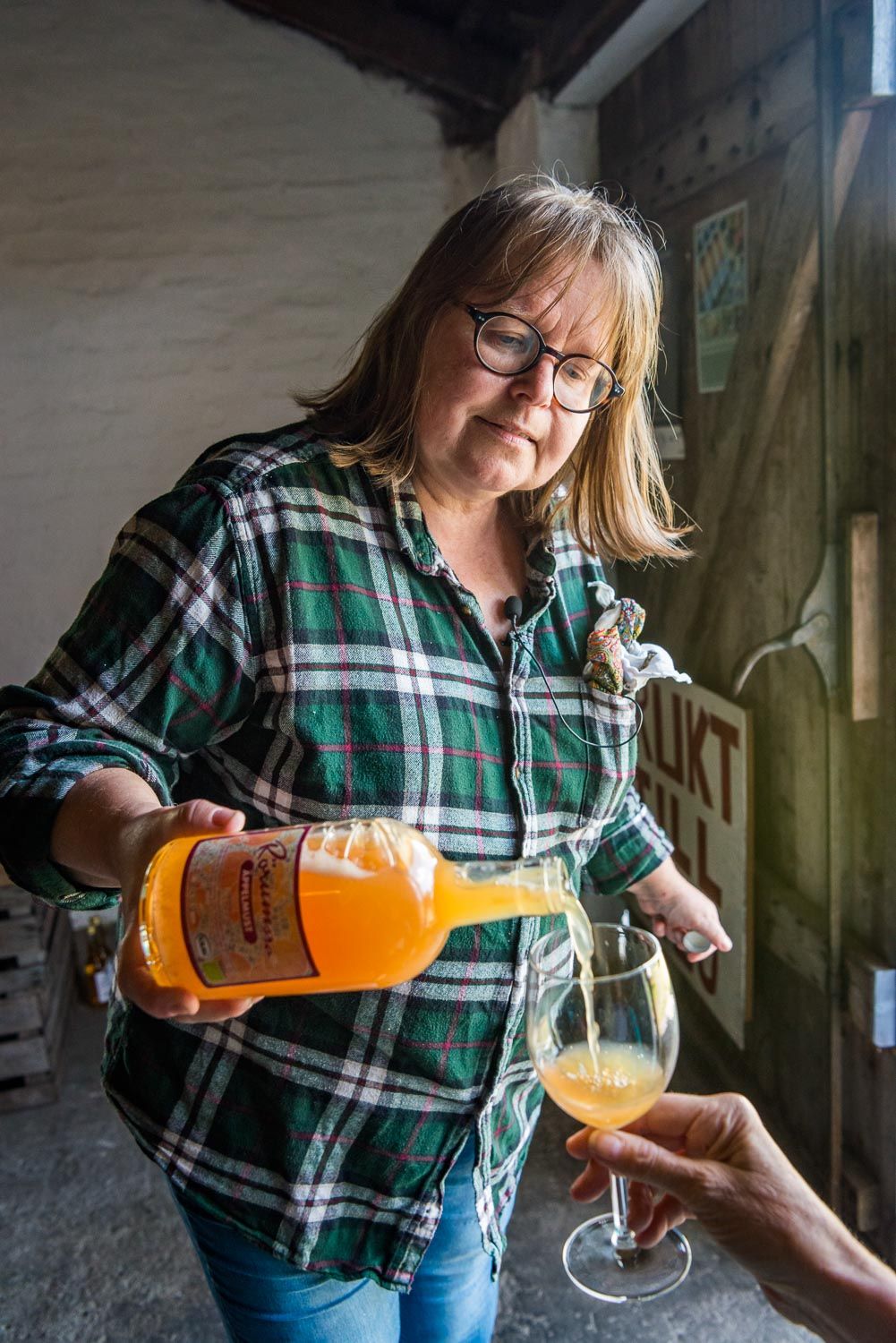 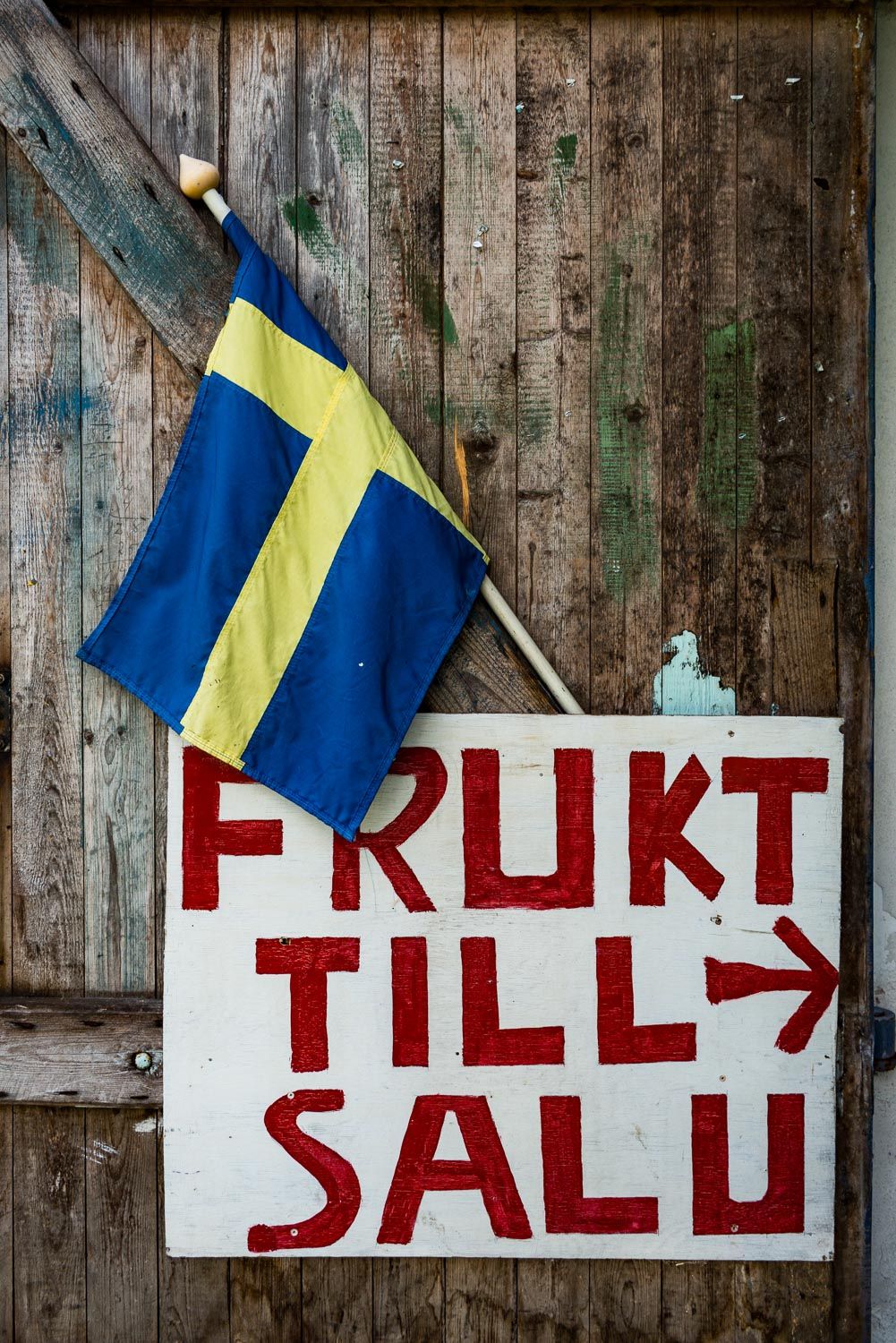 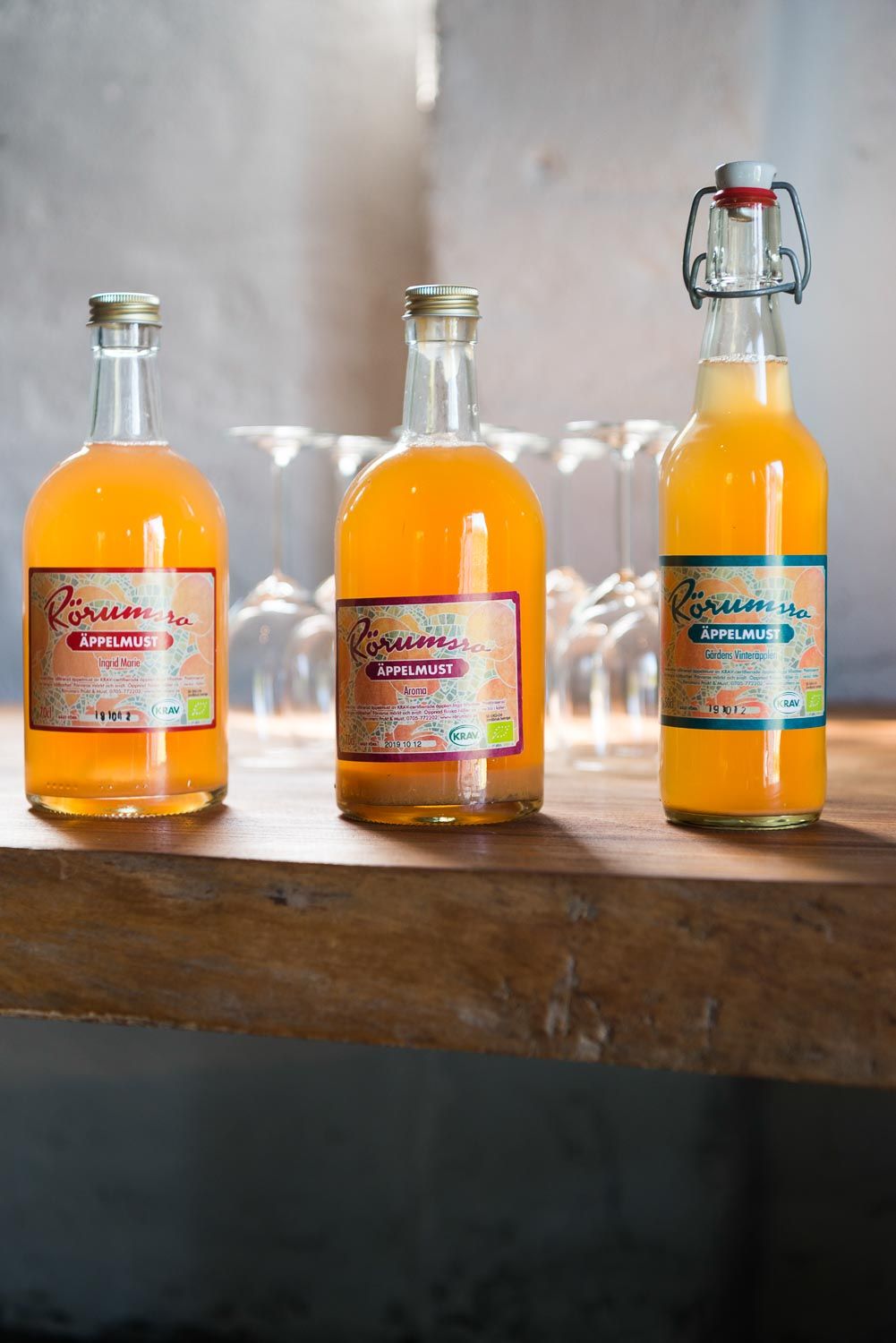 “I have loved animals since I was a child”

This sentence might seem a little cynical coming from a butcher (I have loved animals since I was a child), but David Lindegren is no ordinary butcher. He comes from the city and calls himself a city slicker. He could easily be a writer or yoga instructor instead of a farmer. The smile on his face is never far away. David is a thinker, a doer. As we follow him around, we immediately realise that David owns a big piece of land, including a forest. His cows, Swedish mountain cows, are standing at the back. David waves at them and yells: “Hello, ladies!” In his hand, he holds a bucket filled with apples. They are for Rose and Rut, two sows each weighing 300kg that live in the forest. At this moment, the ladies are lounging in the mud. “Disgusting? It keeps them clean. The mud stops pathogens.” With a flat hand, otherwise they’ll bite it in their enthusiasm, David stuffs the apples one by one into Rose’s mouth. Rut also gets a few apples. David is squatting next to his ladies and strokes their backs. He came here to the countryside in the northwest of Skåne with his family 14 years ago.

Two completely different worlds. You might expect the neighbours to be laughing at him, but they did not; instead, they helped the brand-new city farmer as much as they could. Now David is an accomplished farmed, and butcher! He slaughters the cows himself. Yet, still squatting next to Ruse and Rut, he says “I always find it hard to talk about meat when I’m with my animals.”

David goes to the forest every day to visit his animals; otherwise, they become wild. “Did you know that these pigs almost went extinct? These are an ancient species. The kind that the Vikings yearned for on their long journeys.” What brought David to the countryside? With a shy smile, he says: “The peace and quiet. Nothing gives me more peace than looking at a herd of cows chewing on grass”. 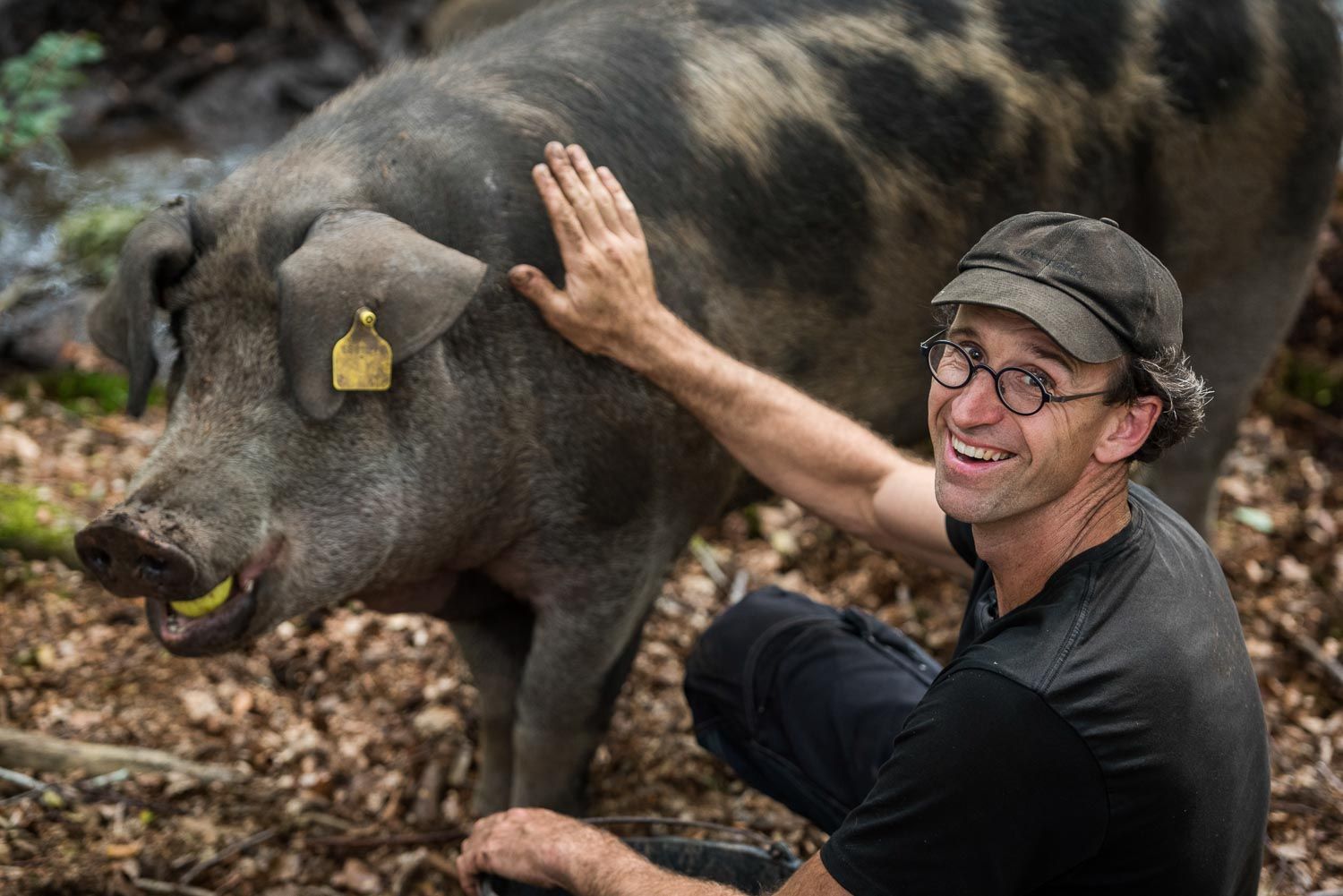 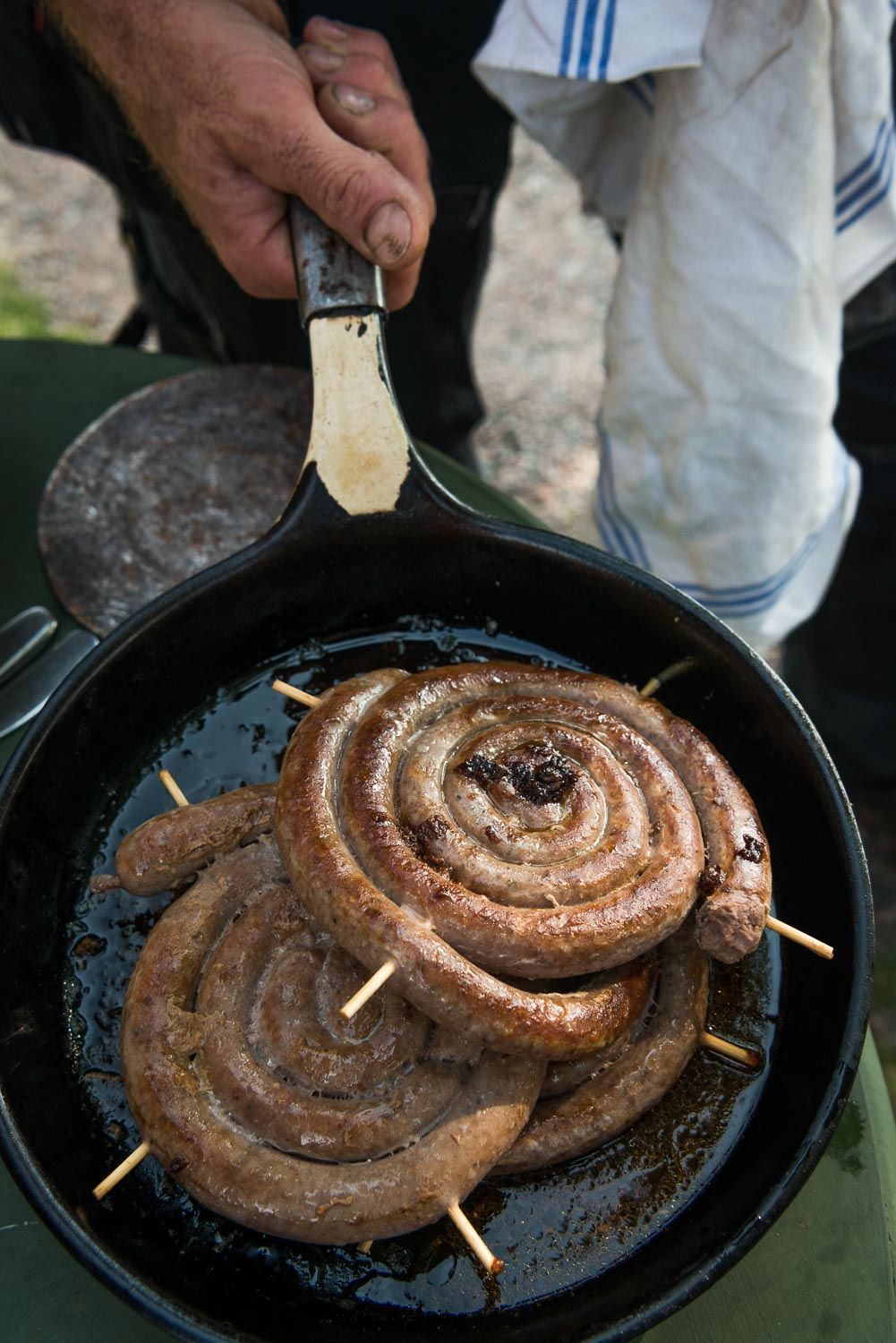 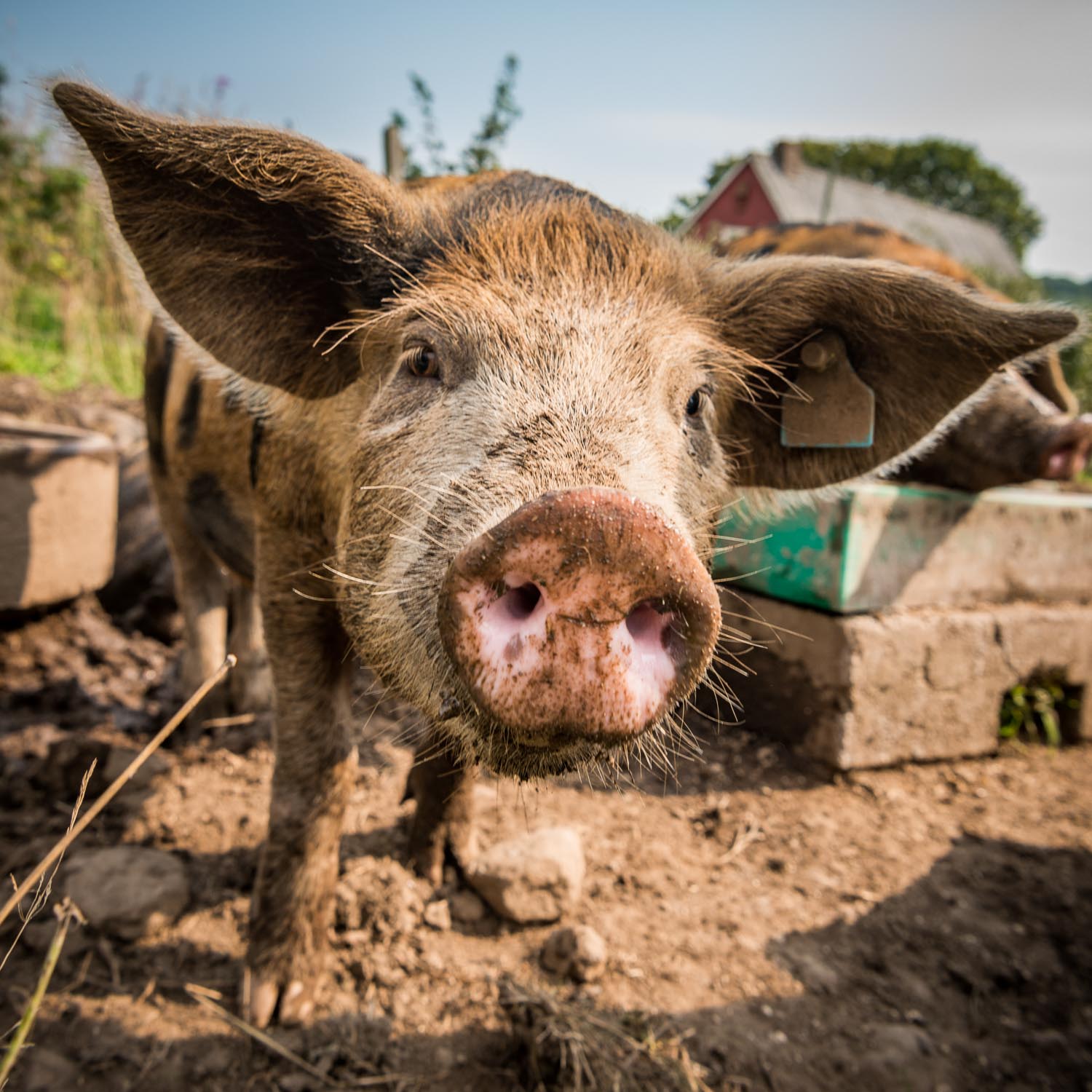 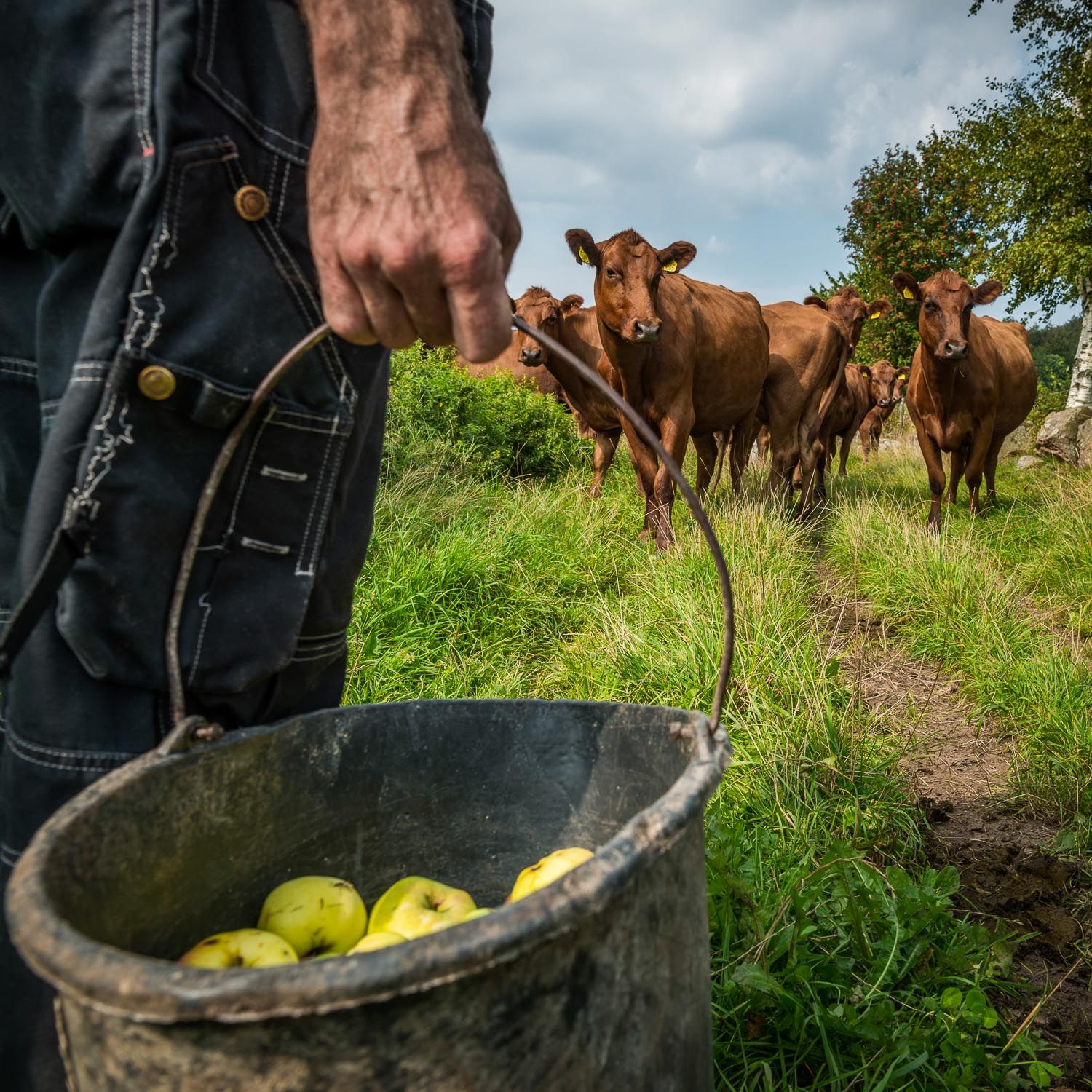 Enjoy the taste of