The treasure chambers of
Uzbekistan

For years, the suffix -stan seemed to mystify tourists. But Central Asia has been unleashed, with Uzbekistan leading the way. The once closed-off land now rises like a colorful phoenix from the bleak Soviet-ashes and dirty desert dust.

These are the thoughts that overwhelm me on the six-hour flight from Paris to the Uzbekistan capital Tashkent. Could that be correct? I stare out of the window of the old-fashioned Boeing and see the dry landscape below me consent meekly. Infinite desert as far as the eye can see. A little later, I find myself in the bustling center of Tashkent, in front of the iconic Hotel Uzbekistan, and I swoon. Things can go fast. Maybe it is the brutalist Soviet style combined with the crisp and clean streets filled with white Chevrolets and rundown Lada’s. Visually irresistible. My guide Nilufar is relieved. And she hasn’t even shown me her favorite metro stations.  “By the way, it was the Russians who started renovating the old attractions in Samarkand, Bukhara, and Khiva.” I look forward to it because those three cities—once an essential stop on the Silk Road—are the heart of tourist Uzbekistan and the reason why Uzbekistan Airways’ flights are almost always fully booked. Tashkent, with its beautiful mosques, mausoleums, museums, and metro stations, is a tasty extra. 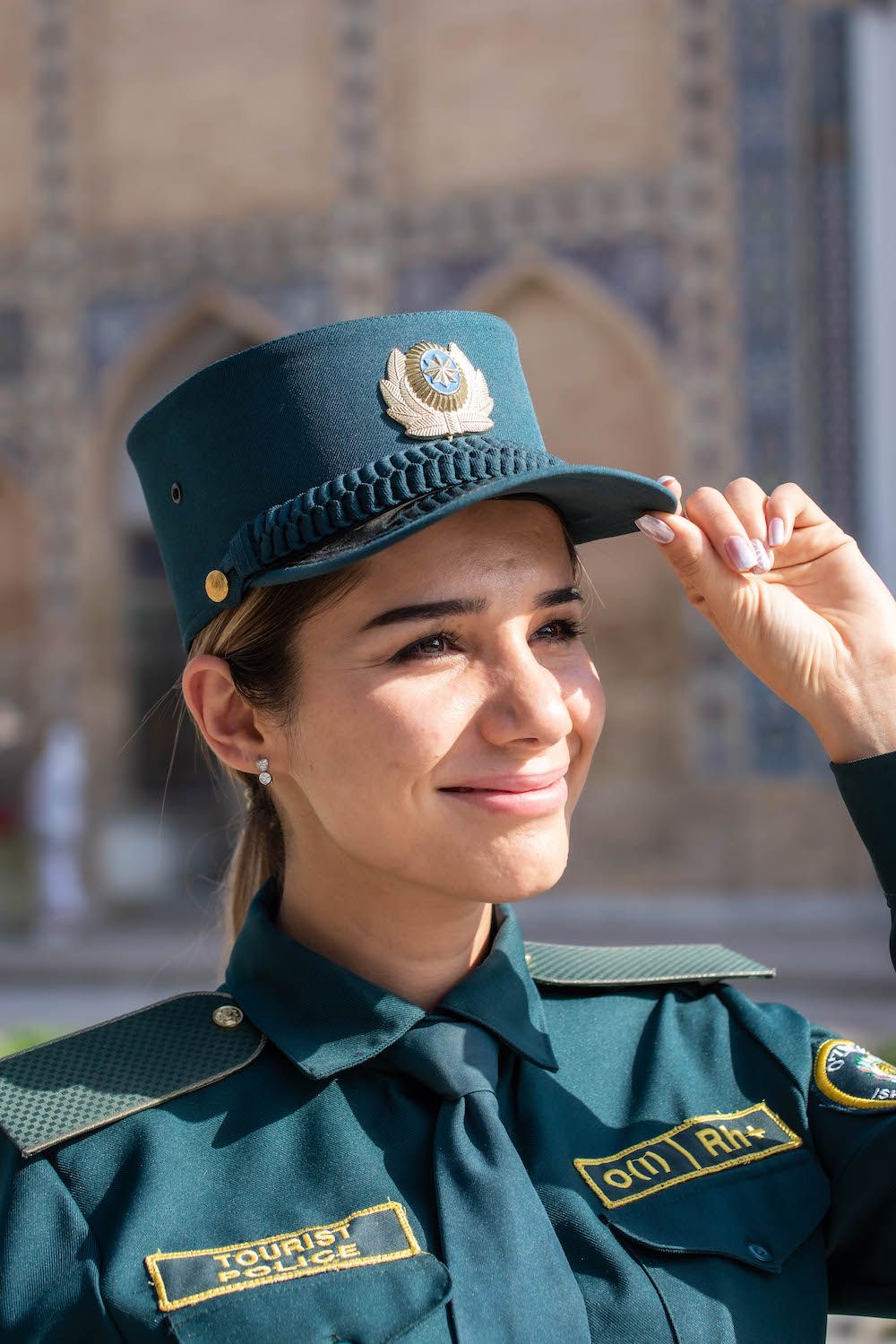 A member of the tourist police in Samarkand 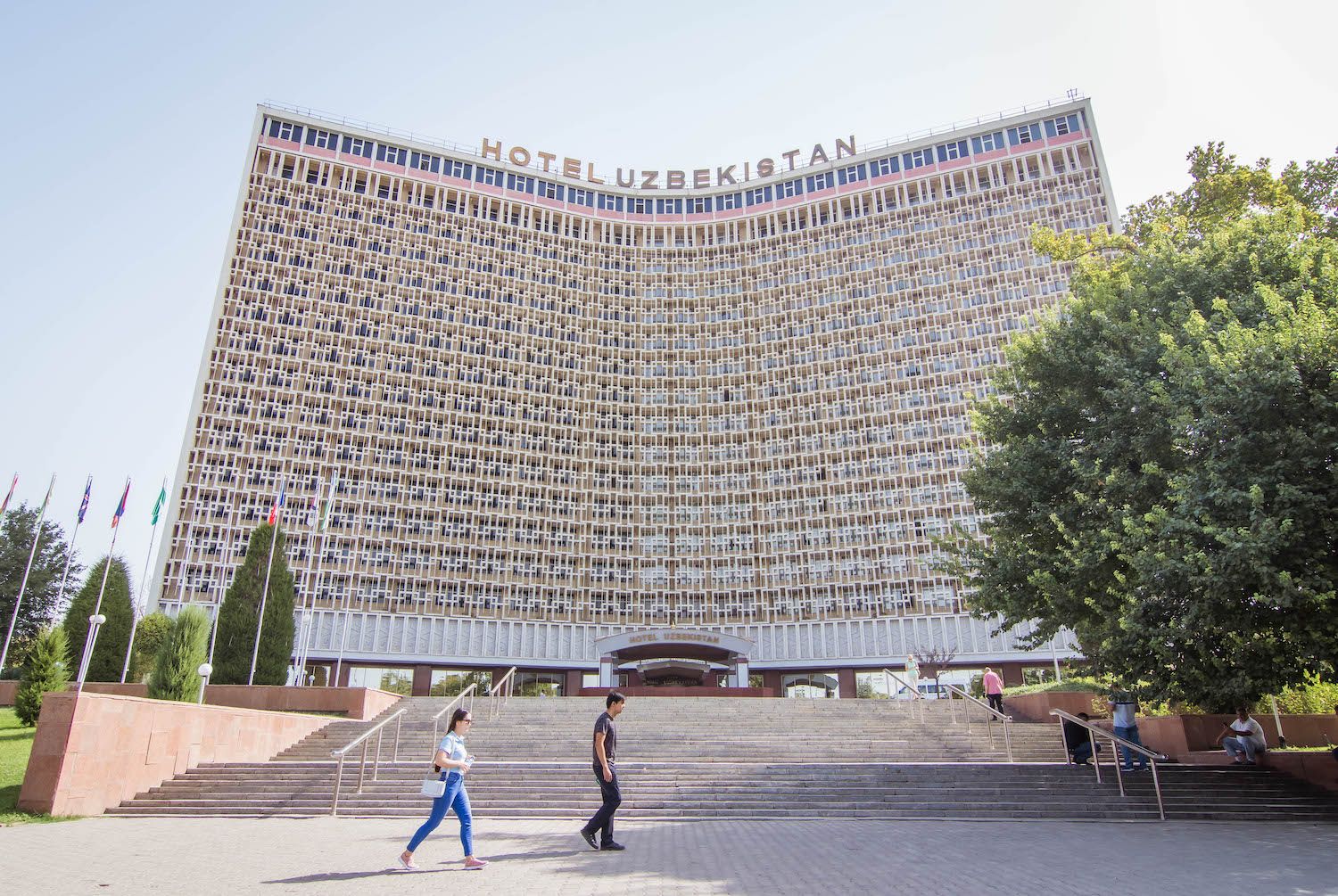 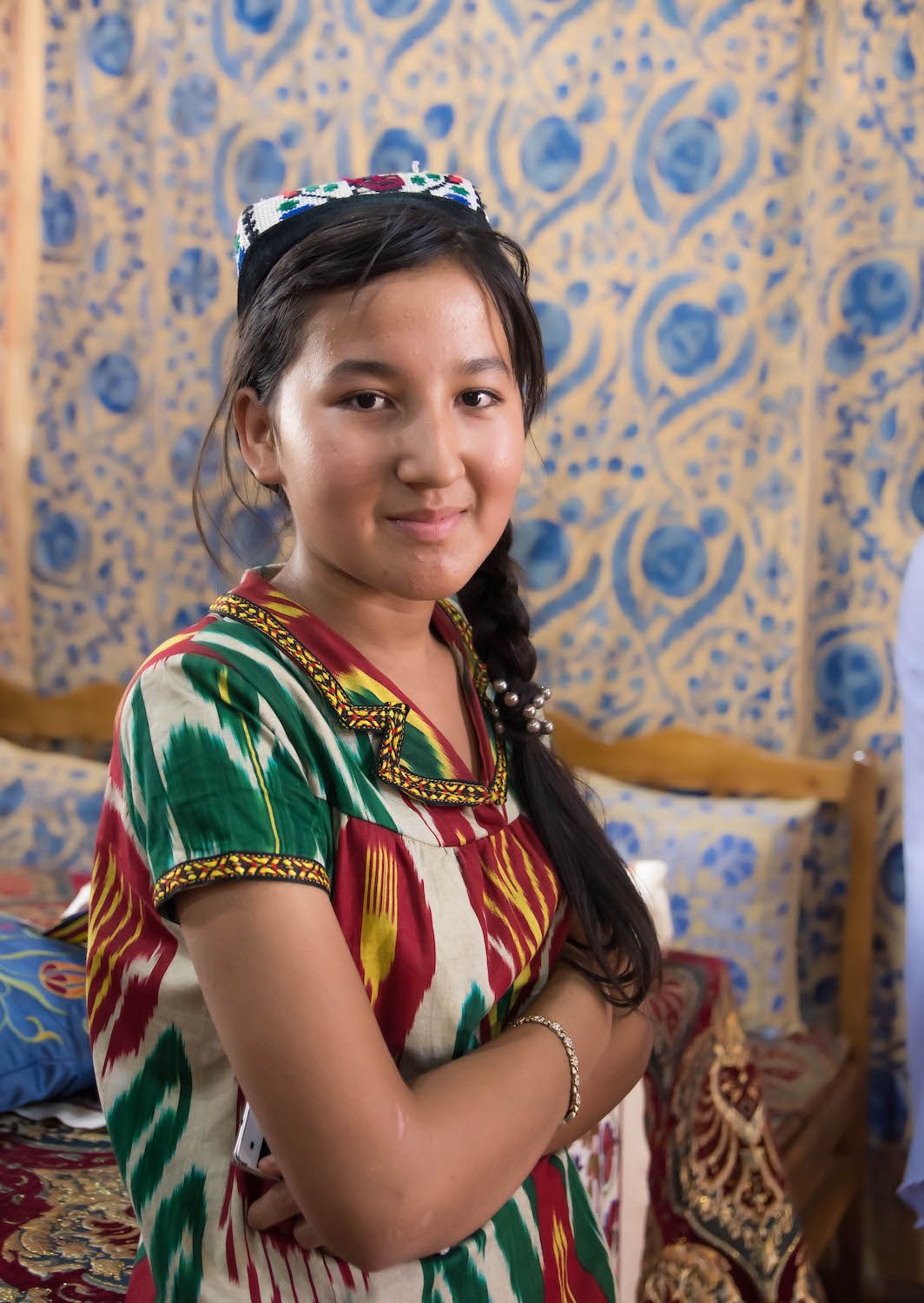 A visit to an authentic fabrics store in Bukhara.

STATE PORTRAIT
And so I find myself on the Afrosiyob a day after I arrive. The Afrosiyob is the modern high-speed train that carelessly roams around the Silk Road, in the footsteps of the old adventurers like Dzjengis Khan and Alexander the Great. Once I arrive in Samarkand, a young police officer leads me outside through the station’s VIP-room. There—out of view of his bosses and colleagues—he asks me for a picture, the state portrait type. “Rahmat,” he mumbles, while he checks himself on the screen of my camera. “Thanks.” Only then do I notice I am not the only one with a lot of photo equipment, let alone the only tourist. “Until recently, it was hard to get a visa as a foreigner,” says city guide Fatima, who awaits me, dressed remarkably hip in a short skirt and with colorful make-up. She clearly makes a point of all the liberties in her country and consequently dismantles the persistent preconceptions about Uzbekistan. Misogynistic? Muslim conservative? Old fashioned? Nonsense. “The appointment of our new president (Sjavkat Mirzijojev, red.) was the dawn of a new era. In 2019, he abolished the visa requirement for travelers from about seventy countries. That explains the enormous growth in tourism.” 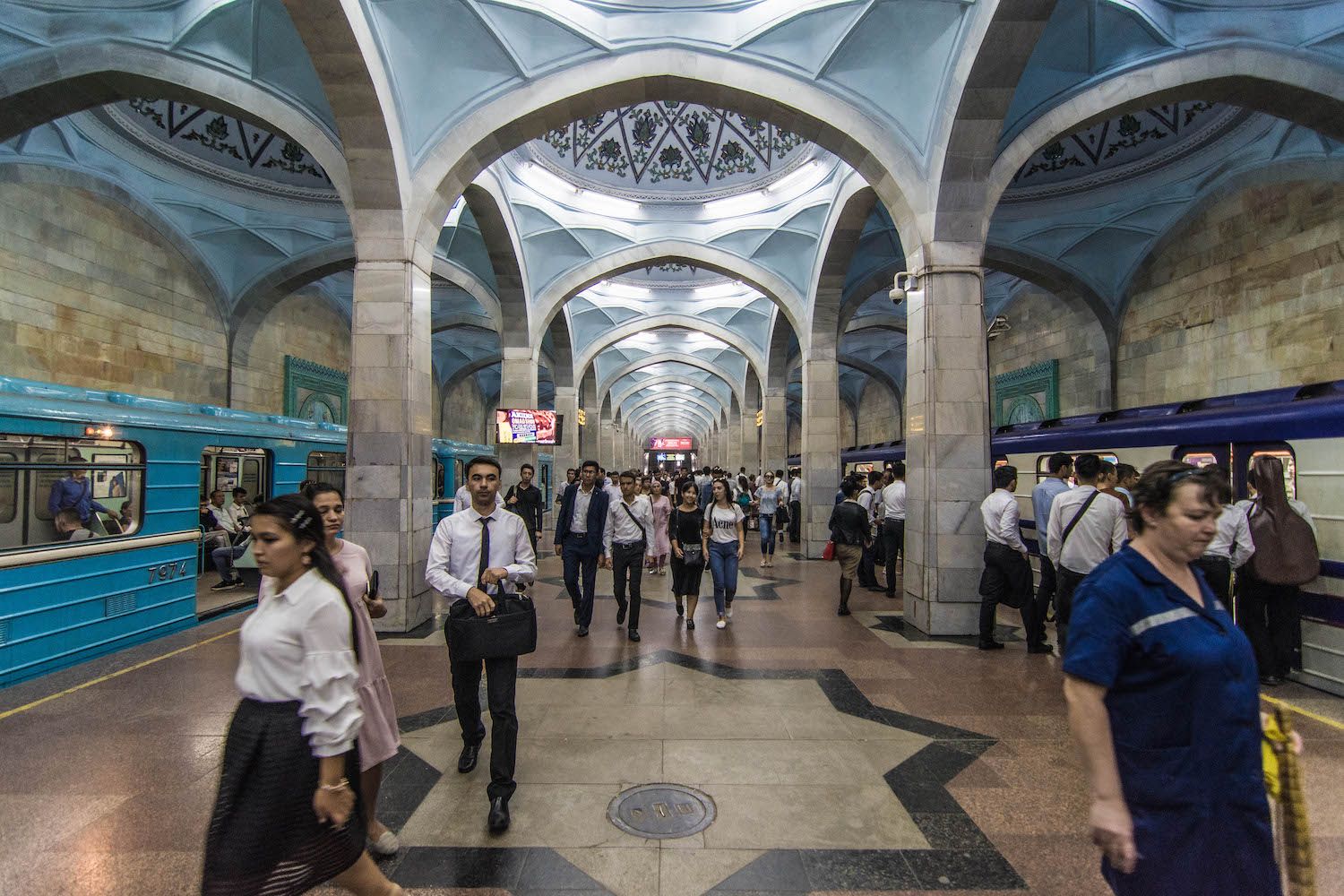 One of the many beautiful metro stations in capital city Tashkent.

GLASNOST
It doesn’t take long before I realize the tourist goldmine Uzbekistan has been sitting on quietly for decades. Fatima takes me consecutively to the Ulugh Beg Observatory, the Shah-i-Zinda mausoleum, the Bibi-Khanum mosque, and Registan central square, without a doubt the pièce the resistance in Samarkand. Completely in awe and with one eye peering through my camera, I stare at each of the ancient attractions. The madrassa’s (Islamic schools), mosques, and mausoleums turn golden in the burning autumn sun and are in such an amazing state that it makes me suspicious. As if they have been planted there last-minute. But Fatima takes away my doubts. Everything here is at least four, five, or six hundred years old. I realize traders on the Silk Road in the late medieval times got the same picture: a prosperous and breathtakingly beautiful oasis in a bone-dry, smothering wasteland. The recent Uzbek glasnost suddenly seems the very logic. “If you have it, flaunt it,” Fatima smiles.

NO GERMANS
The more time I spend in Uzbekistan, the clearer it becomes that the image I had—a prejudice, as you will—is miles from the truth. Tell a family member, a friend, or a colleague about Uzbekistan and you will get a load of raised eyebrows, worried looks, and curious questions. Definitely number 1: isn’t that dangerous? It isn’t. What’s more: there are few countries where I feel more at ease. In the intercity to Bukhara, I let Fatima’s words sink in: “What did you expect? That donkeys are our means of transportation? Alright, there is still a long way to go, we are no Germans, you know. But don’t forget this is a young nation.” Point well made.  In Bukhara, I am surprised again by my guide, named Manfur, who preps me for a packed two-day trip in what he calls ‘the pearl of Uzbekistan’. I have heard such promises before, but after visiting the Ismail Samani Mausoleum, the Po-i-Kalyan Complex, and the Arc of Bukhara, I stop resisting. “Bukhara is over two thousand years old and is the most intact example of a medieval city in Central Asia. The city houses over 350 mosques, more than 100 religious colleges, and over 140 architectural monuments. Bukhara really is more an open-air museum than a city,” Manfur says jokingly. It cannot come as a surprise that Bukhara has been called the worldwide Capital of the Islamic Culture in 2020. 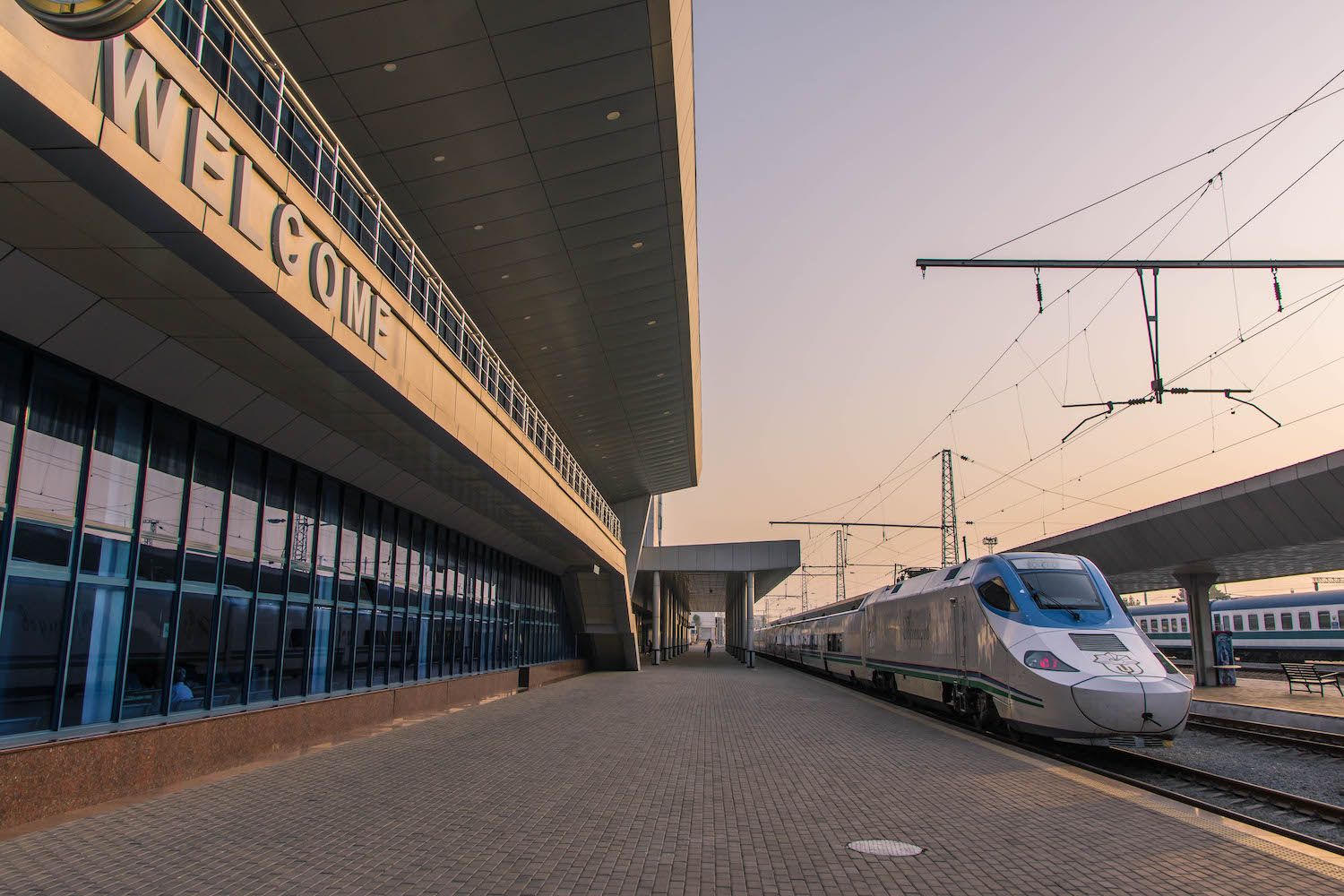 The central train station in Tashkent, where you can take the Afrosiyob. 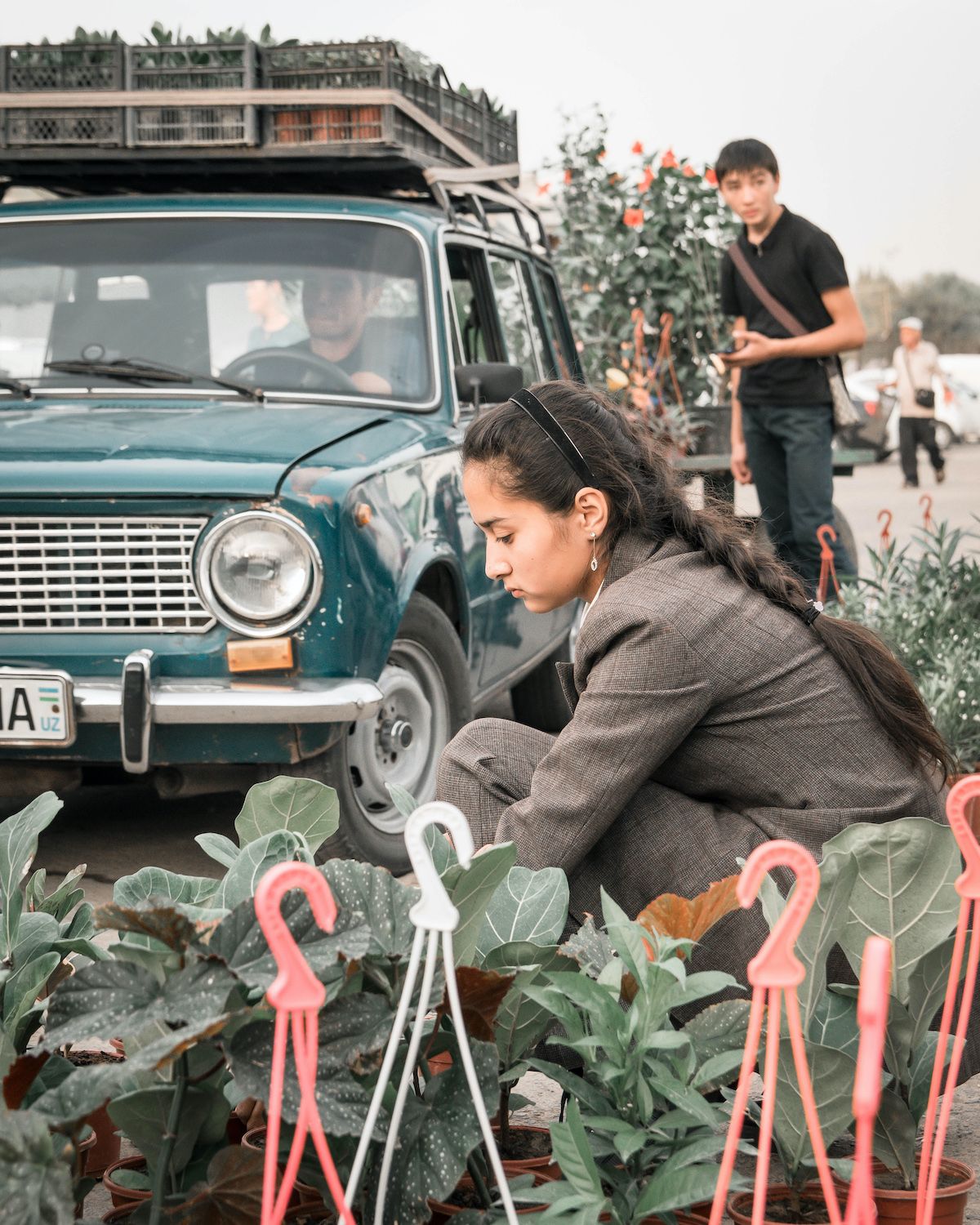 The Chorsu Bazaar in the old part of Tashkent is one of the city’s highlights. 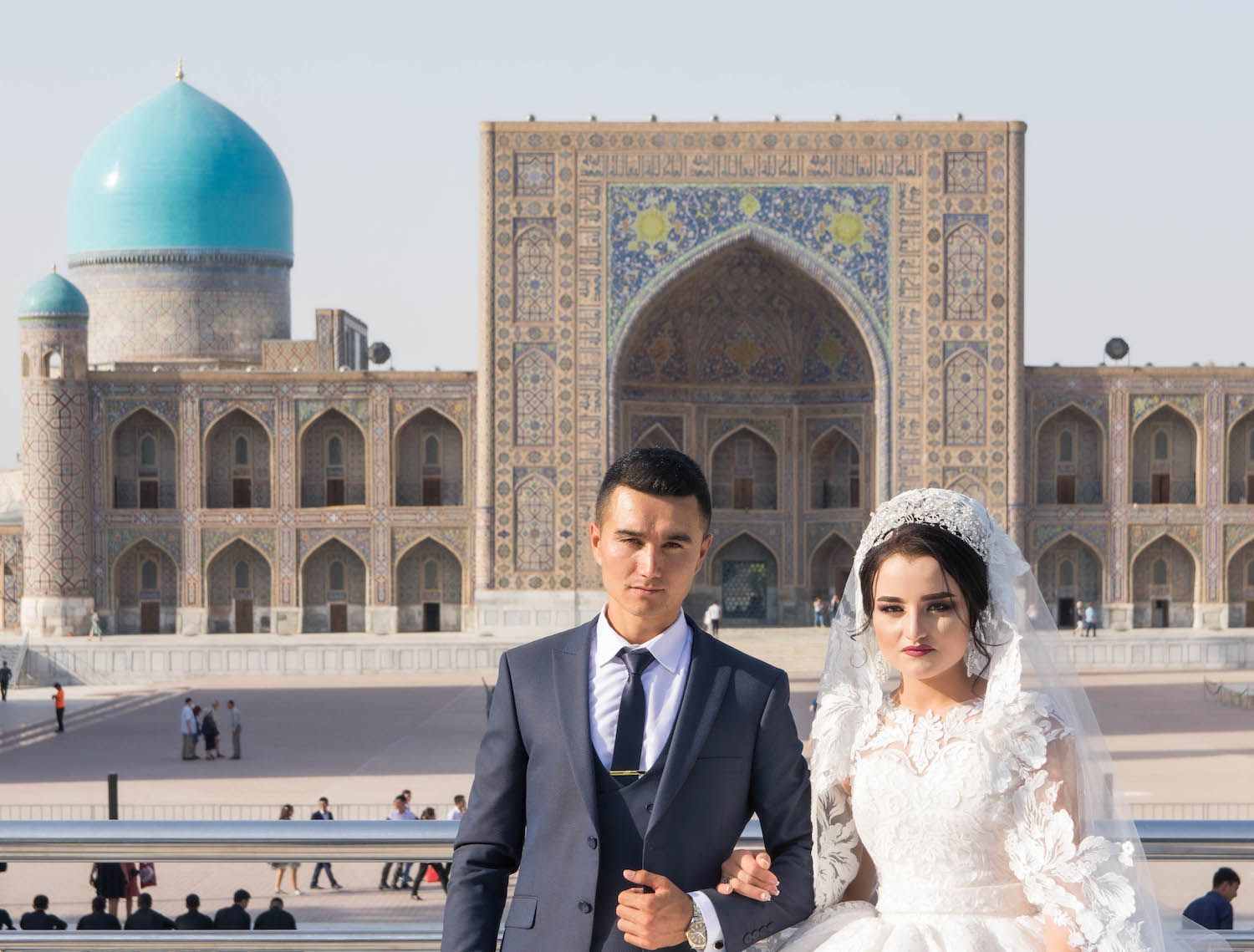 FAIRY-TALE ENCHANTMENT ALONG THE SILK ROAD

Stirring contrasts and fairy-tale enchantment – in other words, expect the unexpected if you plan on visiting Uzbekistan. Following in the footsteps of some of the greatest adventurers of all times, the likes of Alexander the Great, Gengis Khan and Tamerlane, you may well need logistic support from those who know the hidden corners of the country inside out. The team of Dolores Travel is there with this exact mission: to guide you into the myriad of wonders that Uzbekistan has to offer, from UNESCO-protected Bukhara to the exotic bazars of Tashkent.

Nowhere in Central Asia more than in Uzbekistan you will find yourself dazzled by the majesty of ancient Silk Road cities filled with minarets, fascinating madressas and impressive Islamic tile art. Local operator Asia Tour Elit prides a consolidated experience in arranging tours to this masterpiece of a country, as rich in history as untouched by mass tourism. Whether you admire the formidable architecture of Samarkand, blue domes of Bukhara or the starred skies in the isolated Kyzylkum Desert, the wow-factor is a guarantee on your adventure to Uzbekistan. 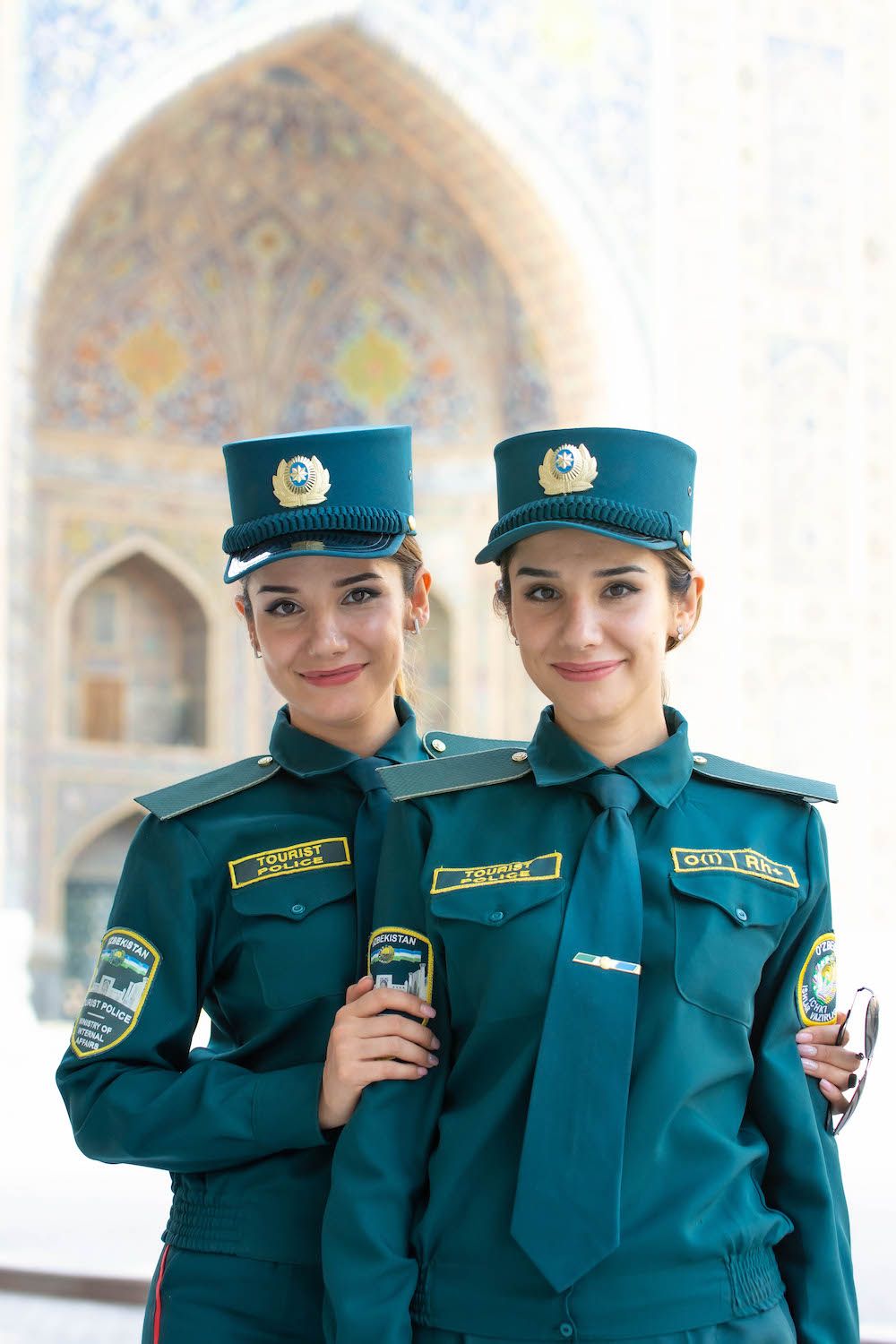 The Rahmatova twins show tourist the way in Samarkand. 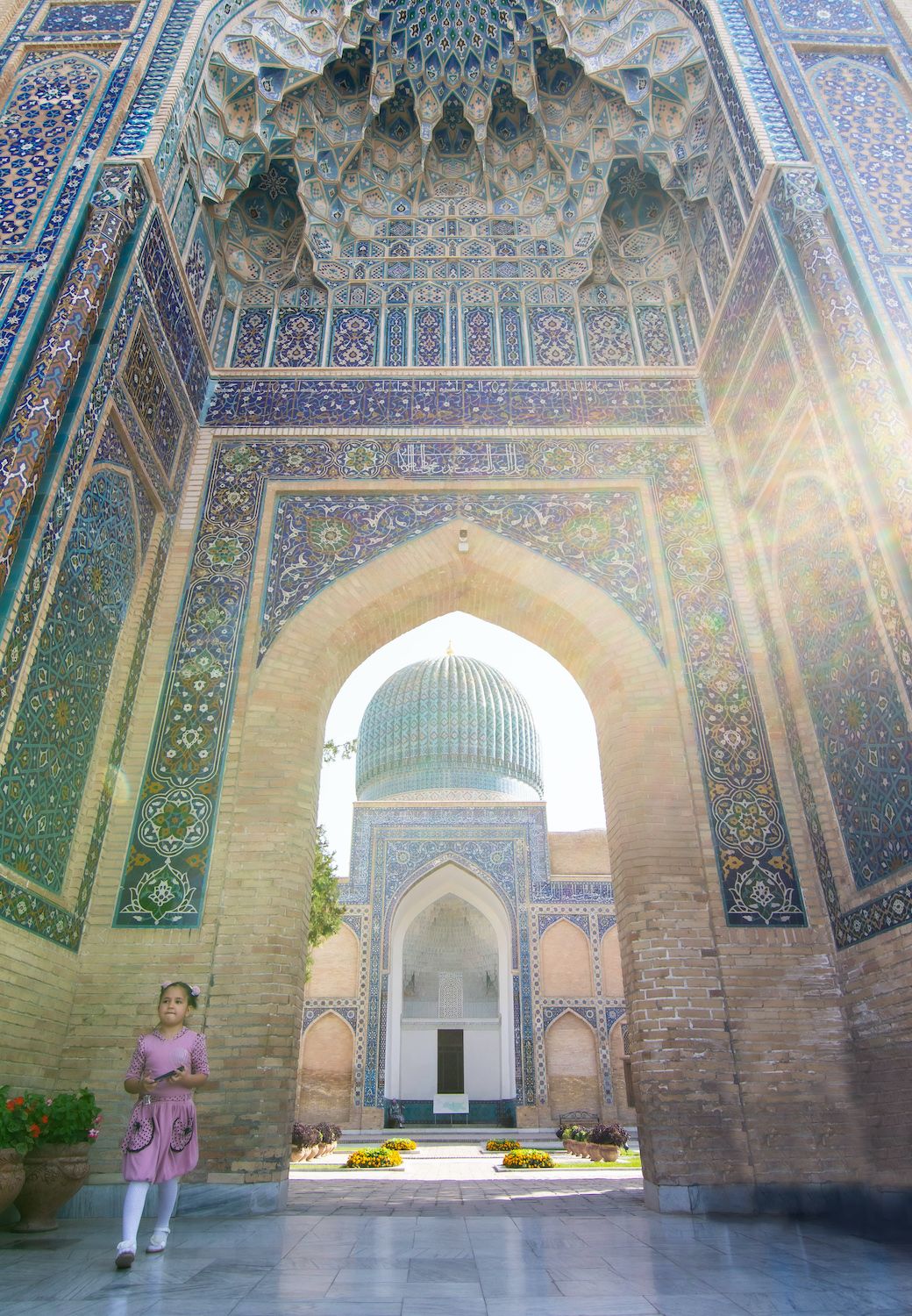 The Bibi-Khanum Mosque is a famous historic Friday mosque in Samarkand.

The wonderful interior of the Bibi-Khanum Mosque. 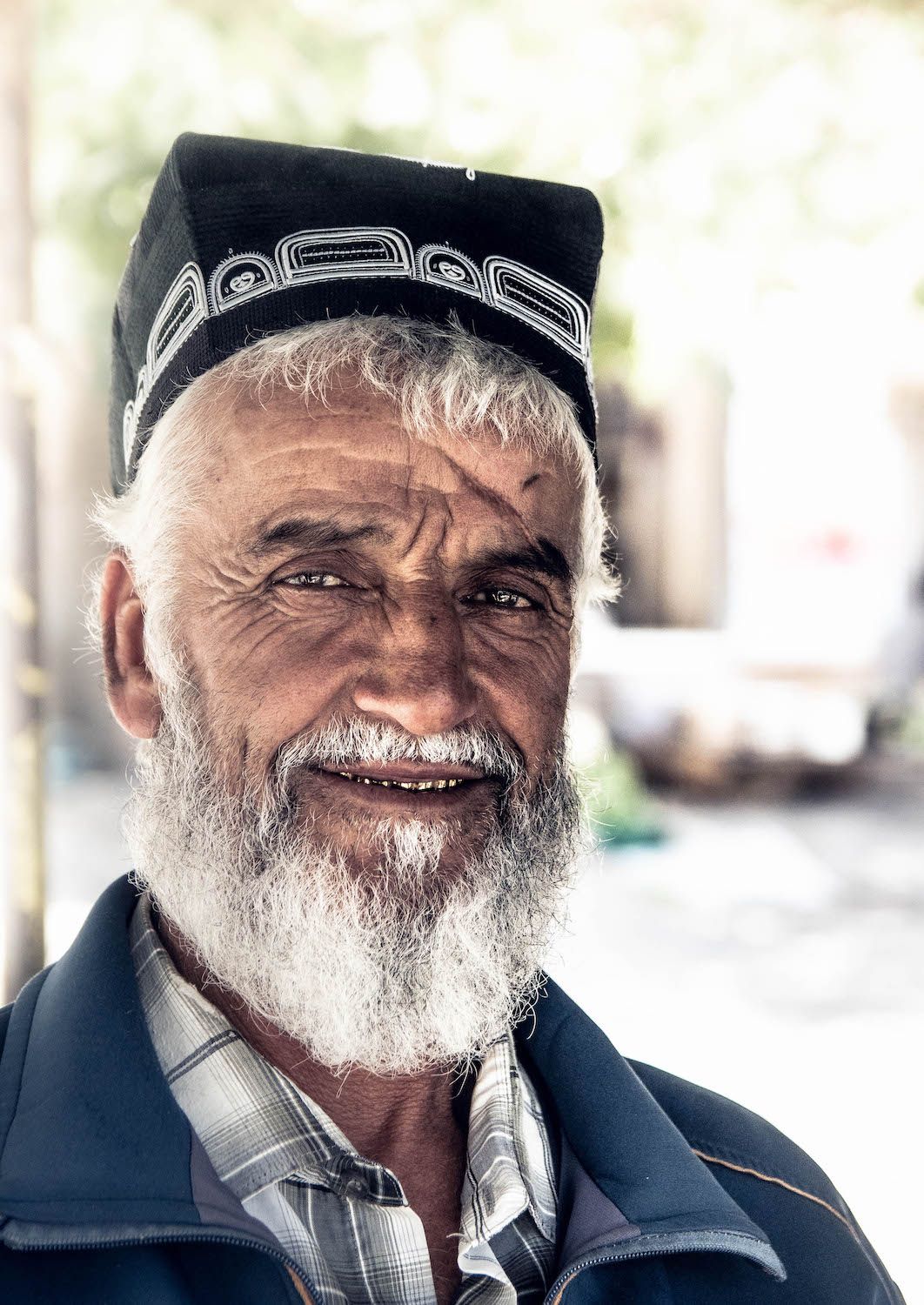 Golden teeth are quite popular in the Uzbek countryside.

ALADDIN AND THE WONDER LAMP
From here, it’s not far to Khiva, the wonderful oasis in the Karakum desert of which the inner city—which was given the name Itchan Kala—was the first place in Uzbekistan to become UNESCO World Heritage in 1990. With a little bad faith, you can call Khiva anno 2020 a tourist trap, but that would be both insulting and wrong. The city is small, walled off, and filled to the brim with minarets, mosques, mausoleums, museums, and other highlights that can wrap tourists from all over the world around their finger. An ancient labyrinth of narrow alleyways that—whatever path you choose—lead to a piece of Uzbek history. It’s Bruges or Venice in pocket size, but with equal touristic value for the region. “But it sure isn’t a dead city”, stresses my new city guide Kamaladdin, who introduces himself as Aladdin. He makes the gesture of rubbing a wonder lamp, but after a week in Uzbekistan, most of my wishes have already been granted. “About three thousand people live within the city walls. So it’s not an open-air museum that closes at night. In spring and autumn, there are a lot of tourists of course. If our tourist growth continues this way, I am curious to see what happens to Khiva.” I agree. It is already bustling with people, and the high-speed train to Khiva is still under construction. In other words: the masses are still to come and will have to wait in long lines to visit the Juma Mosque for example, which houses a forest of 213 hewn wooden pillars that serves as Friday mosque. I wonder aloud whether this could be the most beautiful place in Uzbekistan. Kamaladdin nods affably.

Do and see in Uzbekistan 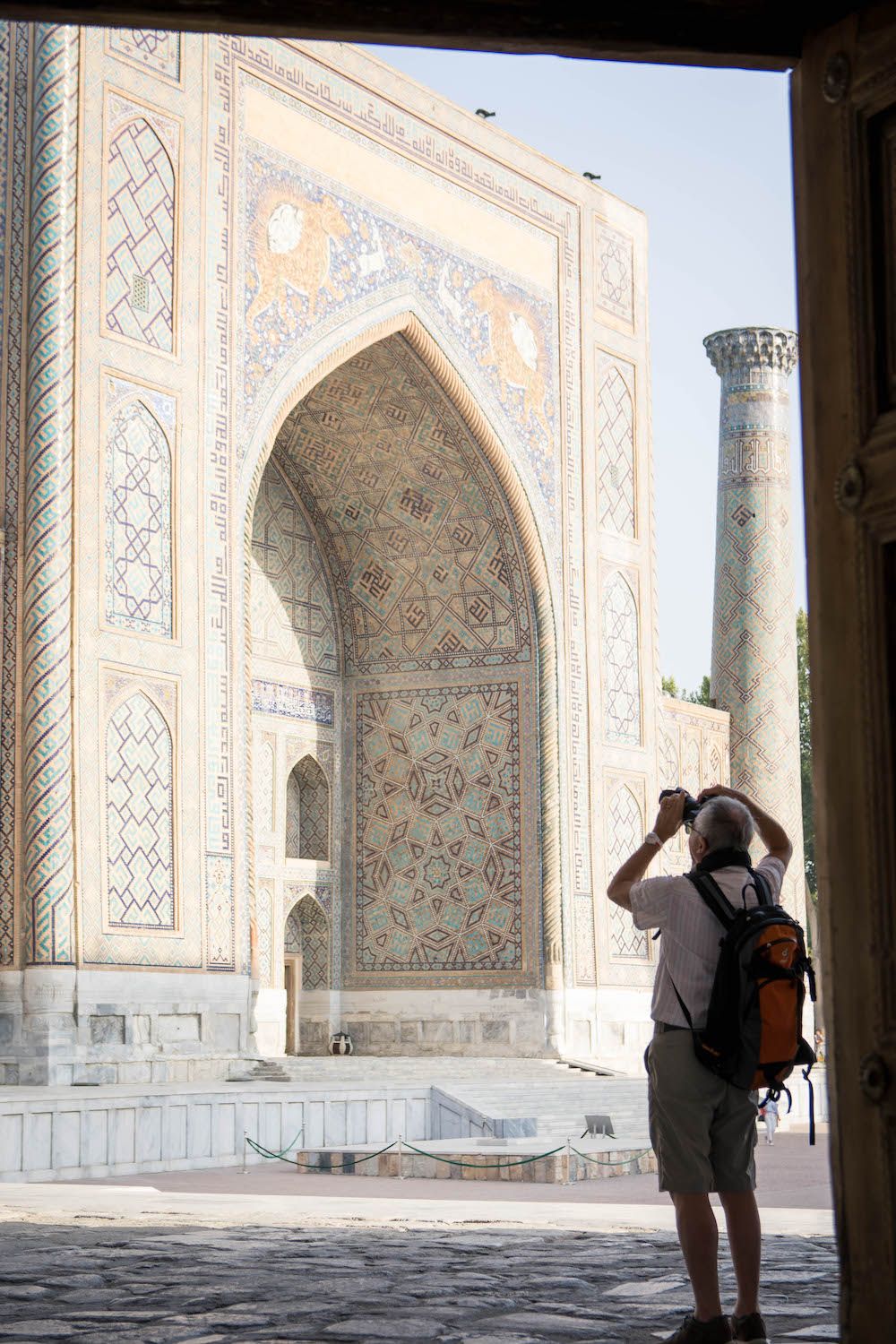 The large square in the historical heart of Samarkand, designed in the 15th century by Ulug Bey. The name Registan means 'Place of sand' because it once was a sandy market square. 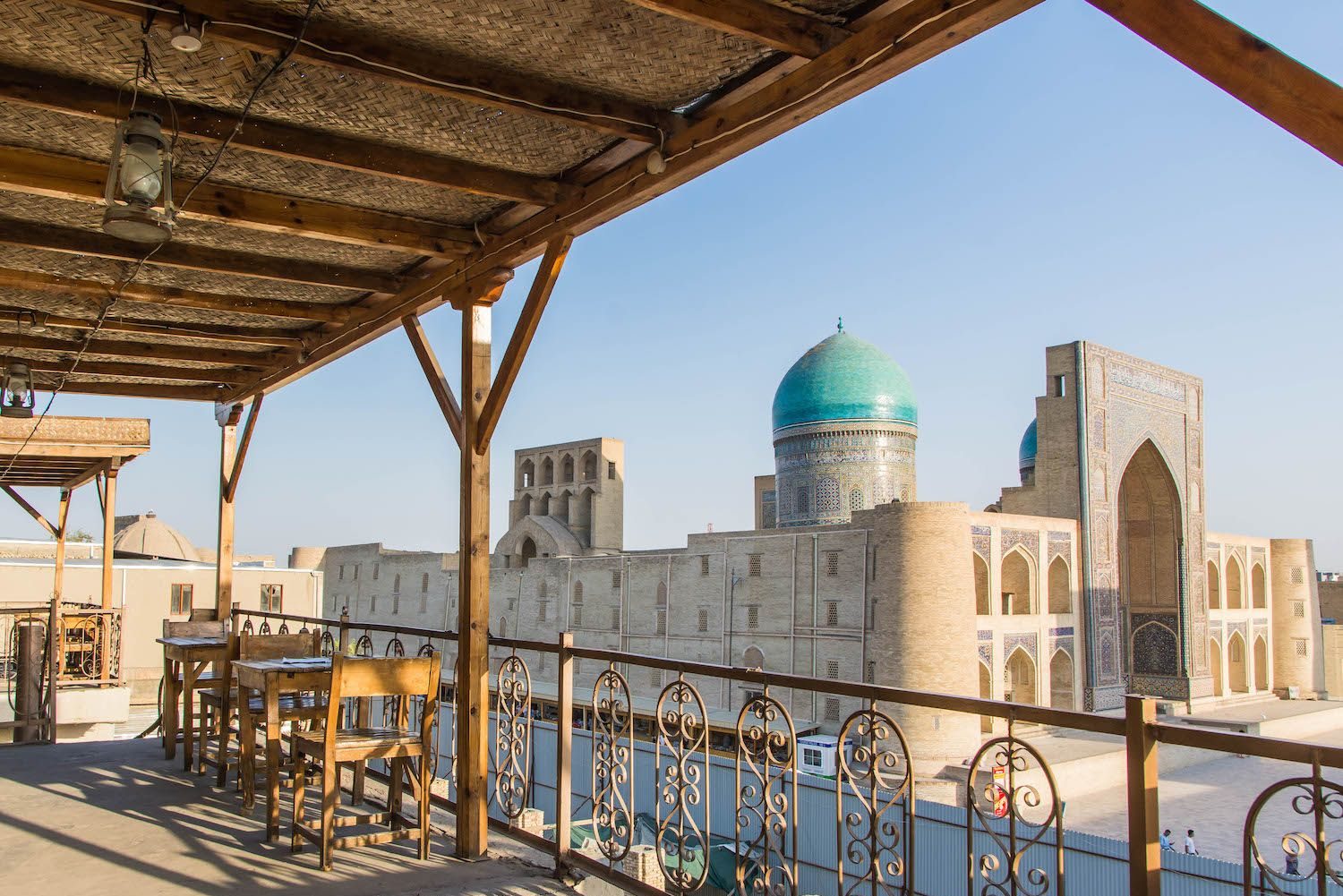 The most important religious complex in Bukhara, where the atmosphere of the Old Silk Road is still the most tangible. 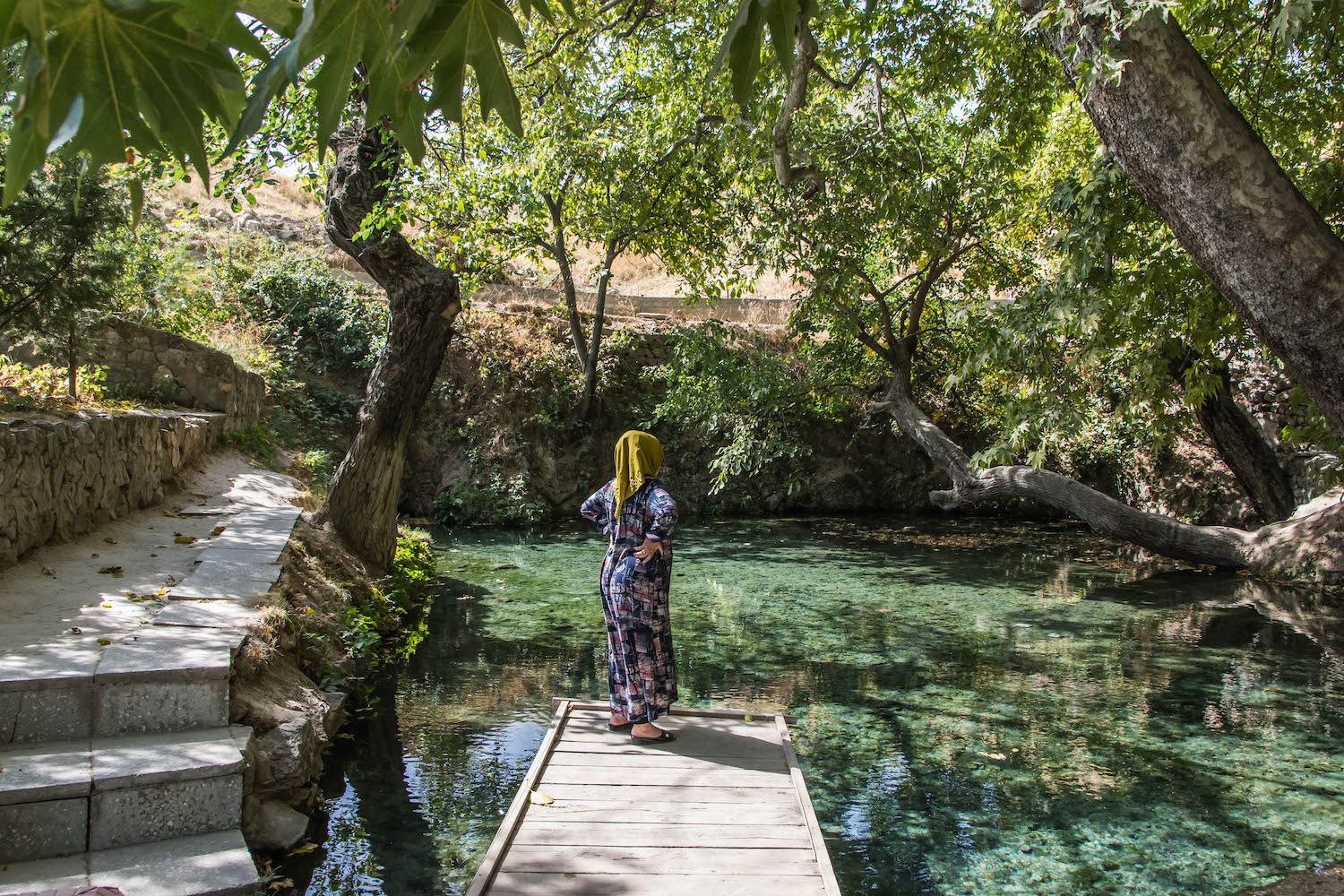 This beautiful oasis is located just outside of Samarkand, in the town called Urgut. It is a park with large plane trees that are rarely seen around here. 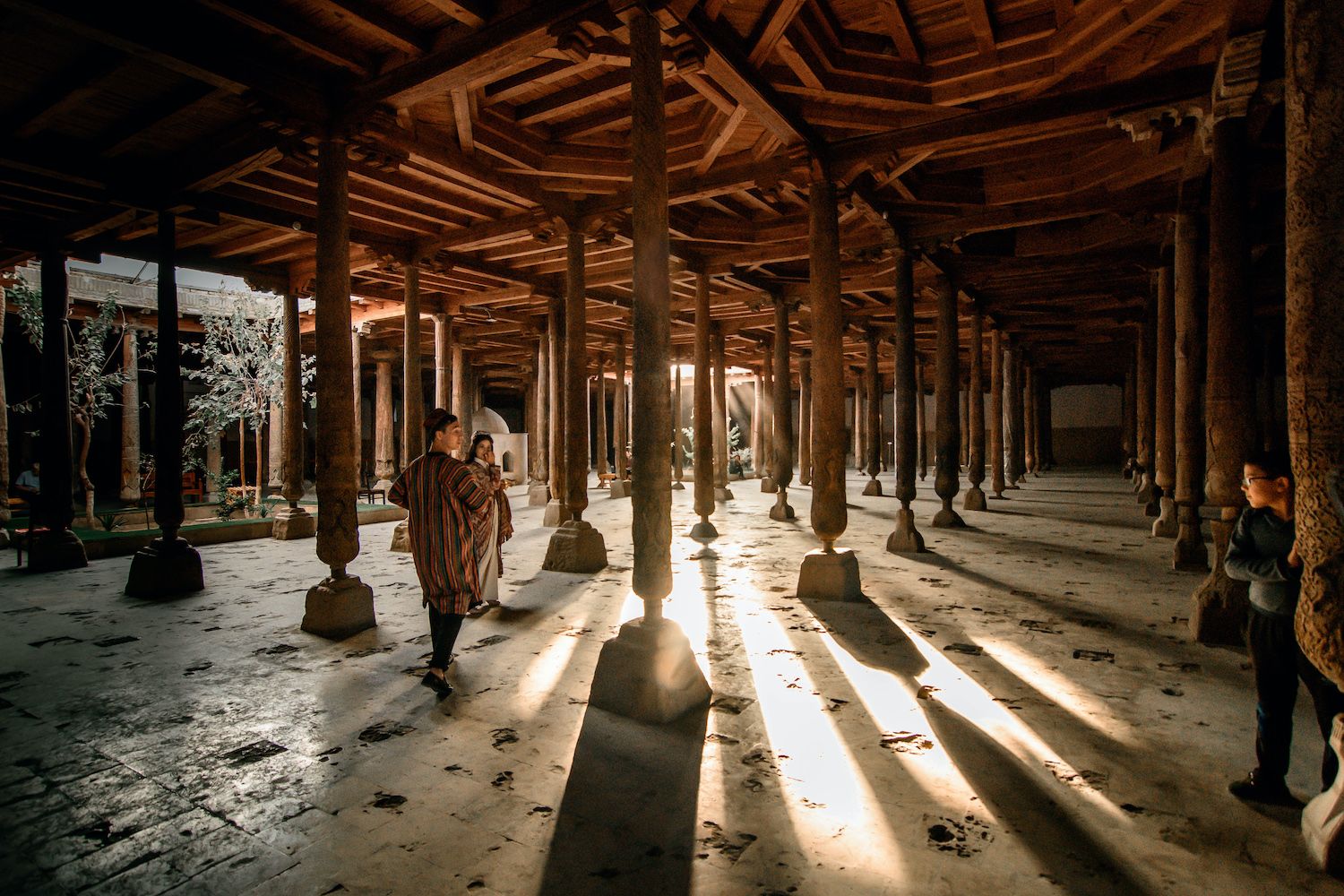 The truly dazzling Friday mosque in Khiva that houses a ‘forest’ with 213 wooden pillars. 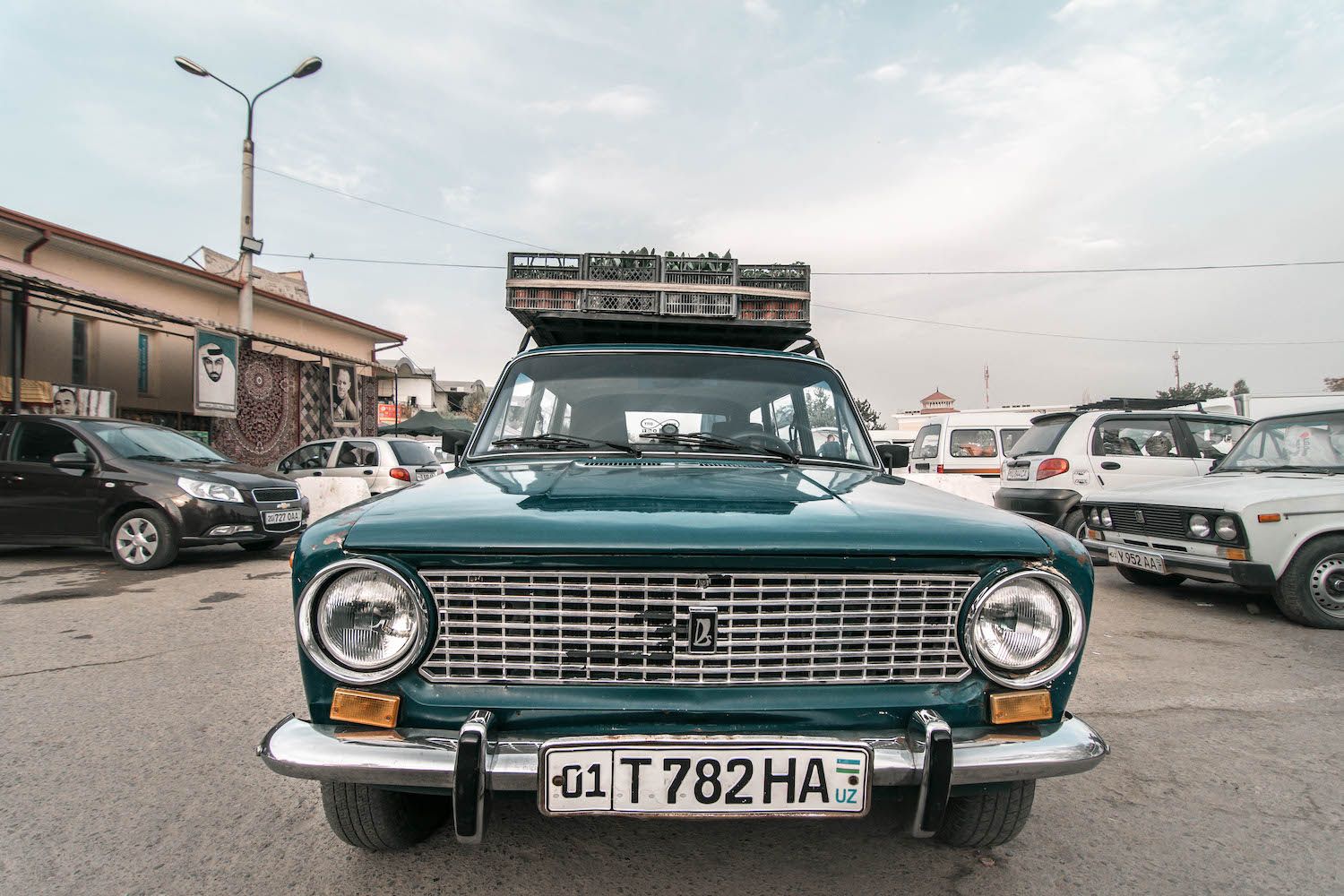 The traditional bazaar (and biggest market) in the old center of Tashkent.

The many years of Russian occupation is best visible underground, in the many beautiful metro stations that enrich the Uzbek capital. 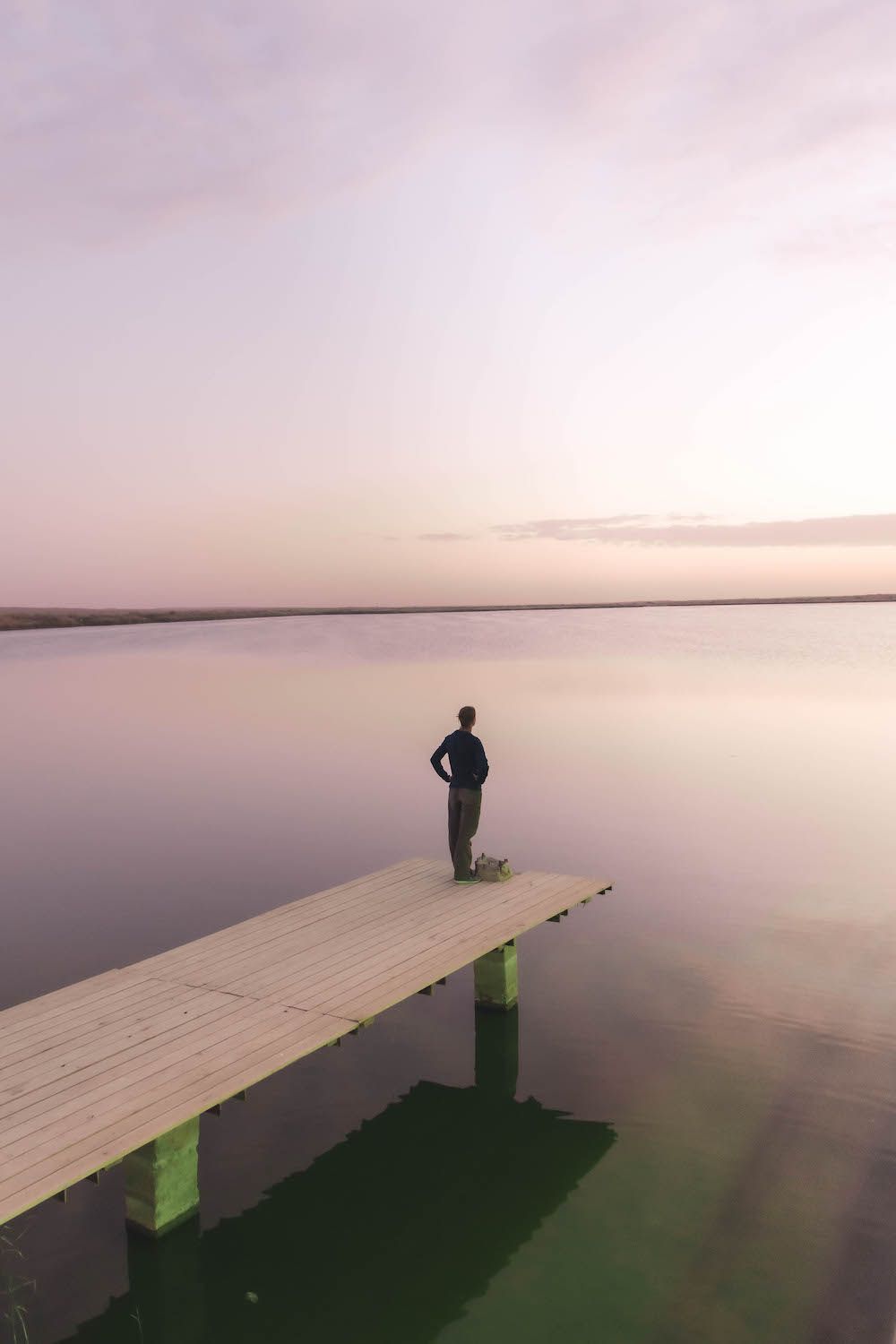 Halfway between Bukhara and the Turkmen border lies Karakul. In Uzbek Qorako’l, ‘black lake’. An oasis in the endless desert. 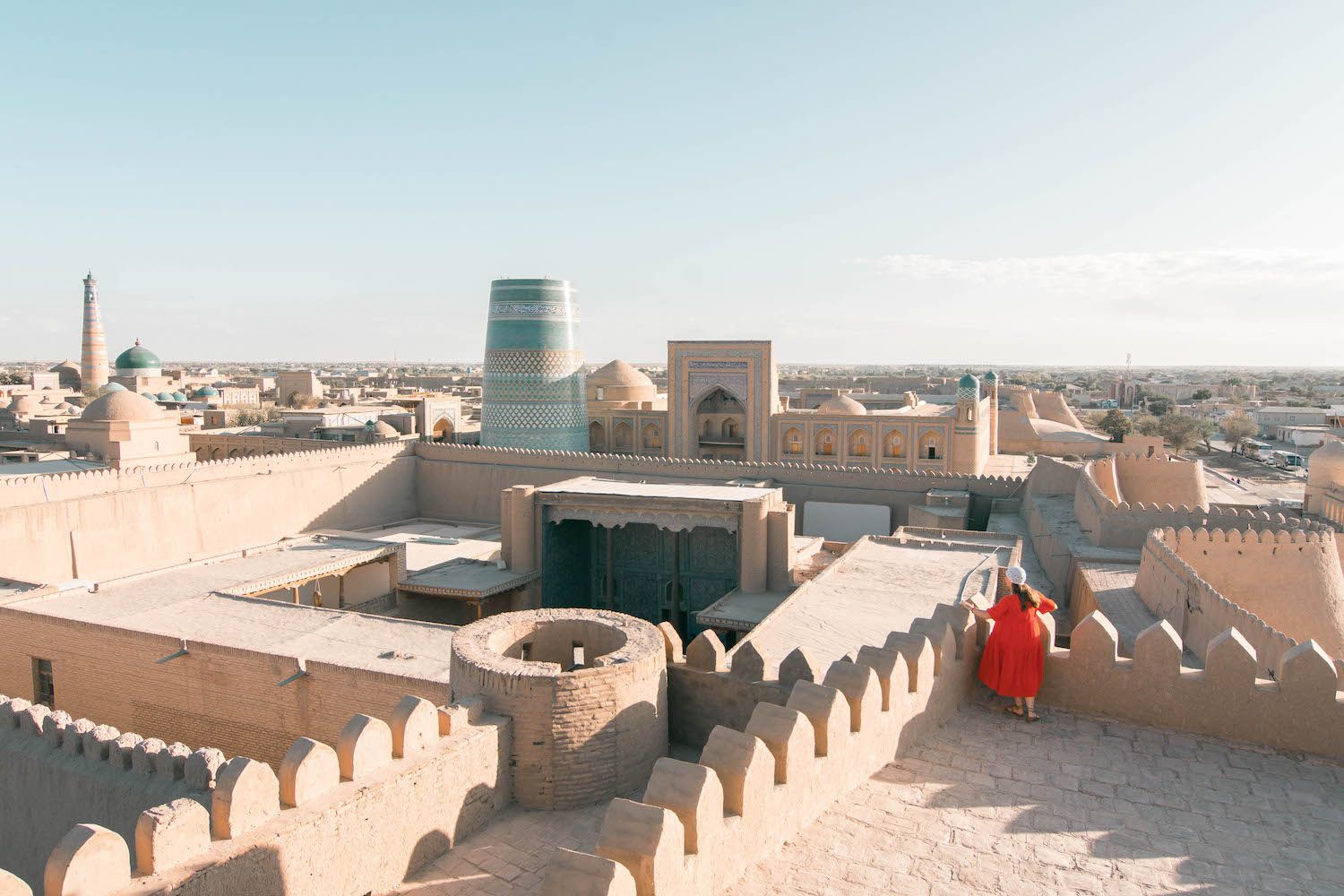 Khiva is small, walled off, and filled to the brim with minarets, mosques, mausoleums, and museums. It was the first place in Uzbekistan to become UNESCO World Heritage in 1990. 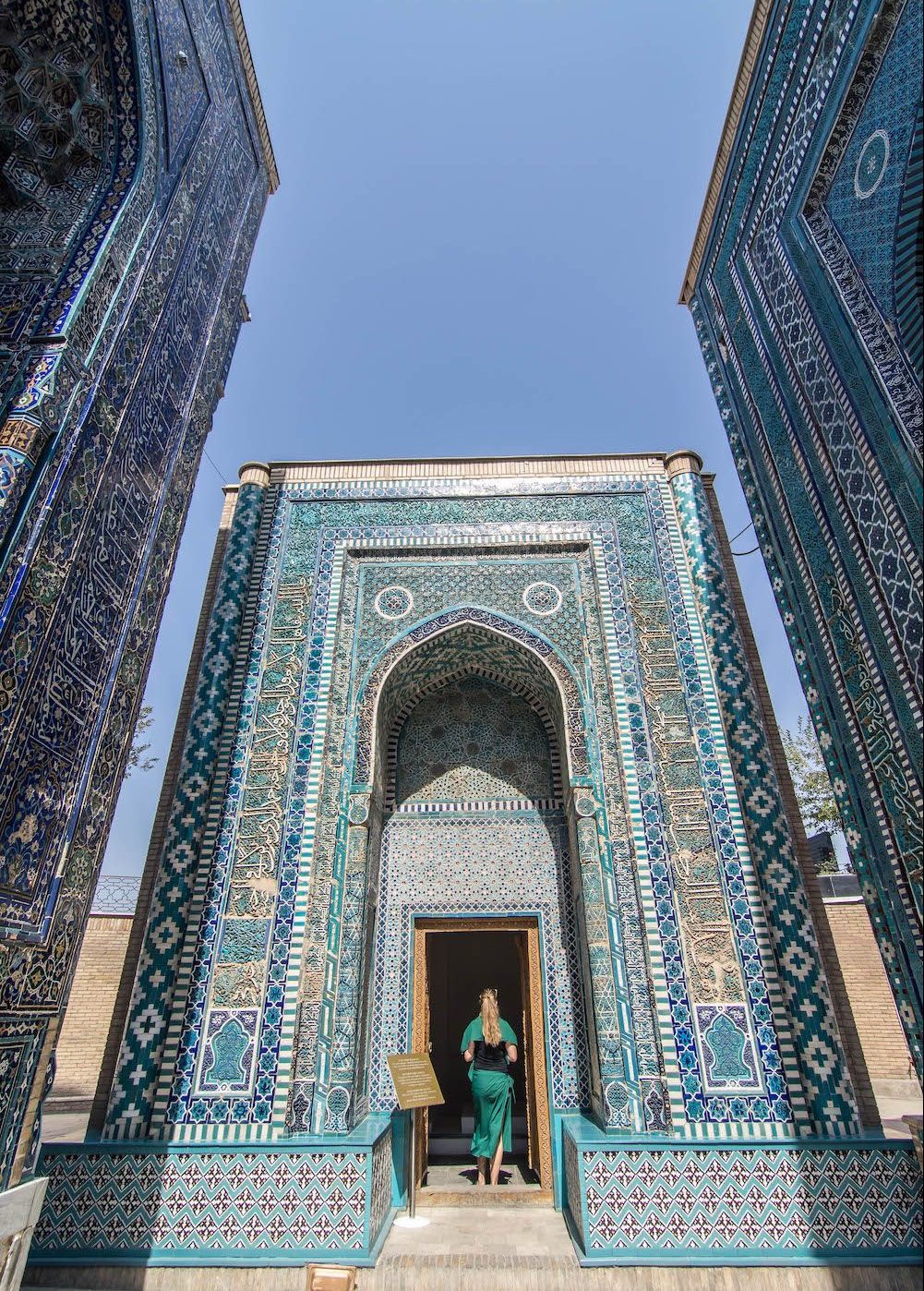 One of the most famous cemeteries in all of Central Asia. This unique cemetery in Samarkand houses more than twenty colorful constructions, including mausoleums and a mosque.