On the South Coast of Iceland, two hours driving by car from Reykjavik and just a short ferry ride, you will find the country’s best-kept secret: the Westman Islands, or as the Icelanders call it, Vestmannaeyjar.

The dark waters foam in the wake of the ferry. Before us, gilded shards of fog dance in the light of the setting sun, and the crests of the waves are coloured a brilliant gold. A flock of seagulls flies merrily alongside us, hoping for a fish or two from the crew. The air has a hint of salt. In the distance, the peaks of the group of islands begin to loom up. One of the islands is half hiding behind the other, the third a little further along. I count more than ten of them. They are black shapes against the pink and purple evening sky. The time for photos has arrived and the Vestmannaeyjar, also known as the Westman Islands, are very photogenic subjects.

The islands lie barely 11km off the coast of mainland Iceland, 135km from the capital Reykjavik. Driving there is a visual delight through the almost unearthly beautiful landscape of western Iceland, past heavily moss-covered lava fields that look as if they have been churned up by a giant mole, and past the Seljalandsfoss, a 65m high, hypnotising waterfall which you can access via a slippery green path. On clear days you have a good view of the Westman Islands through the clear waters of the waterfall, crashing down onto the rocks with the thunderous noise of a jet engine. 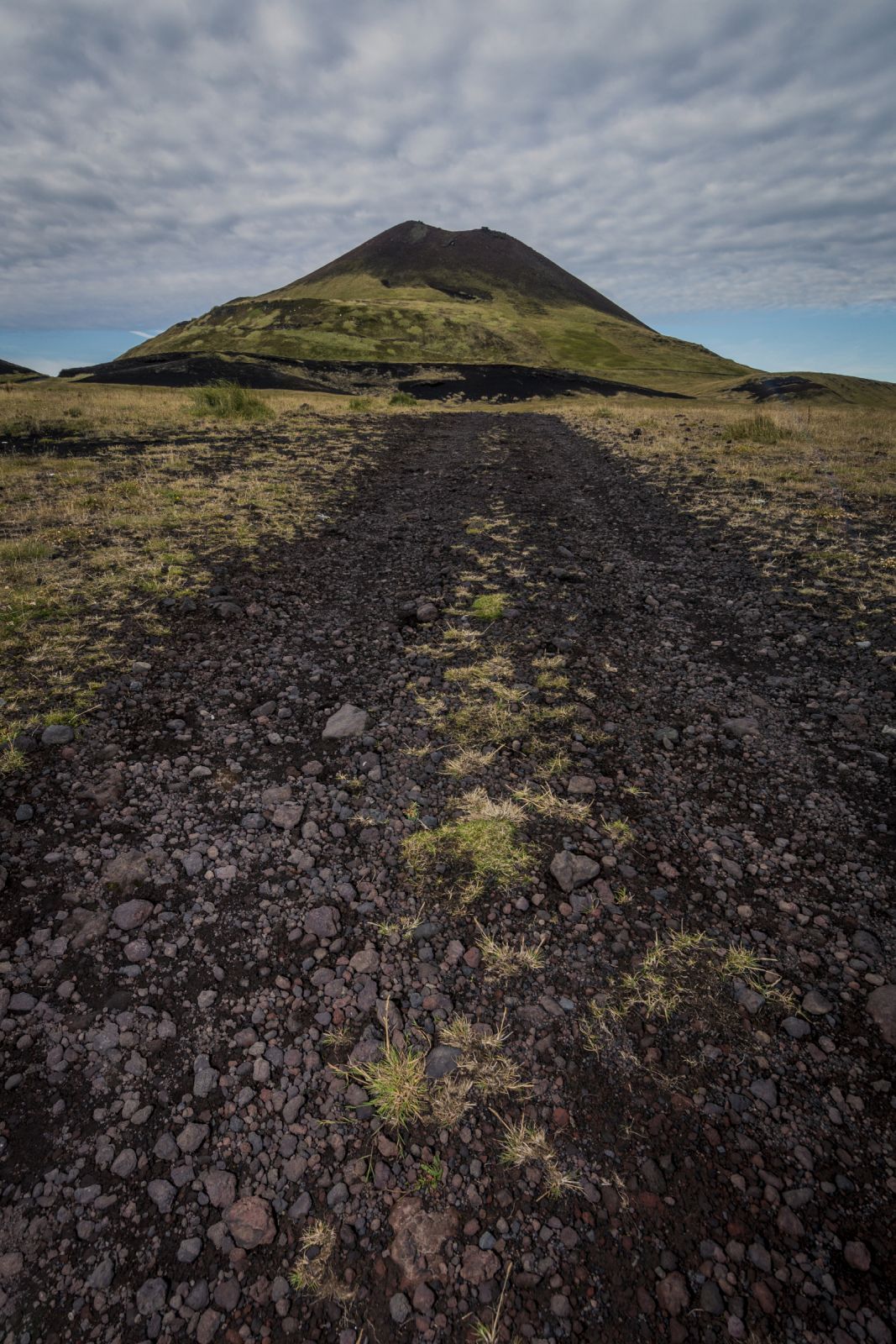 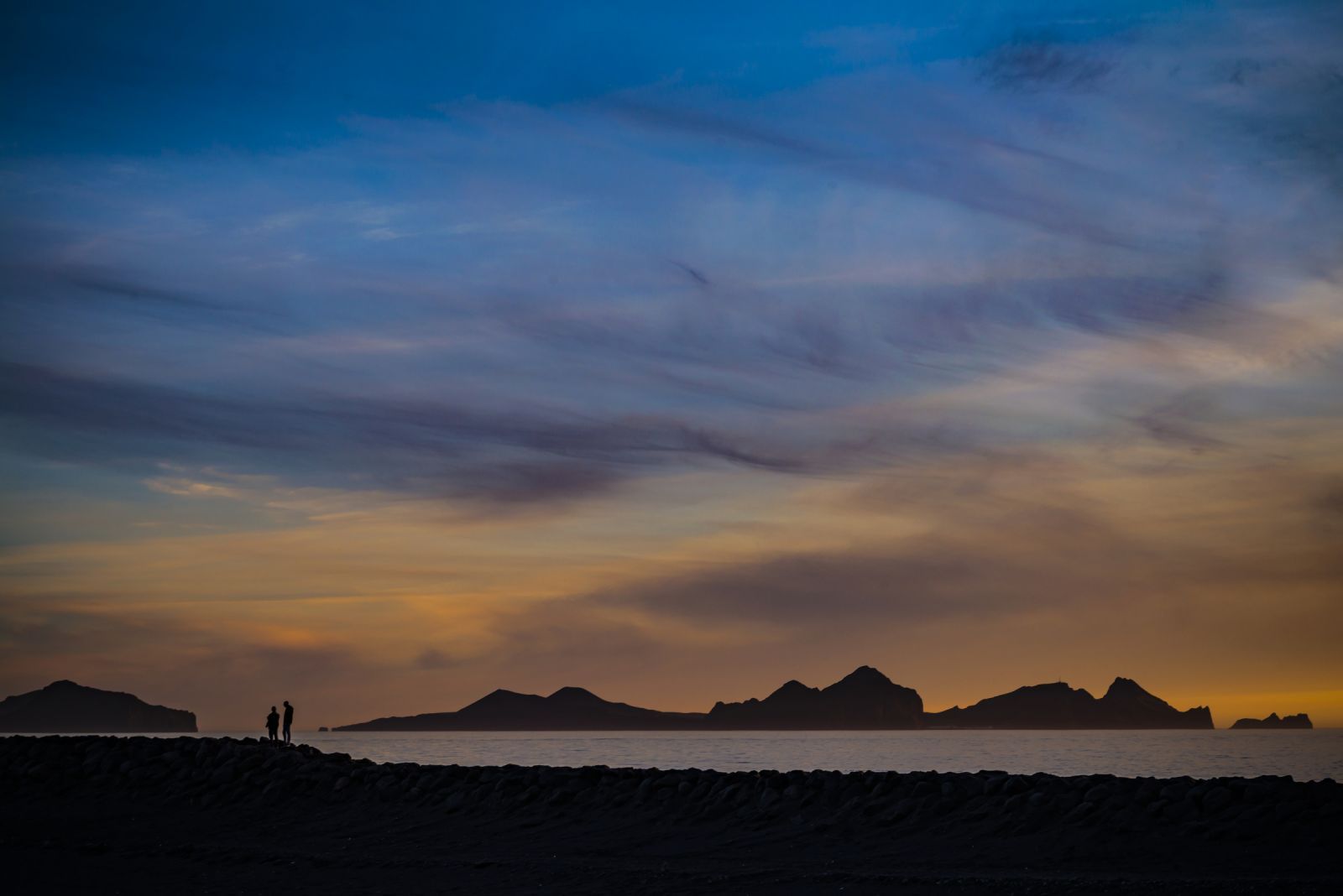 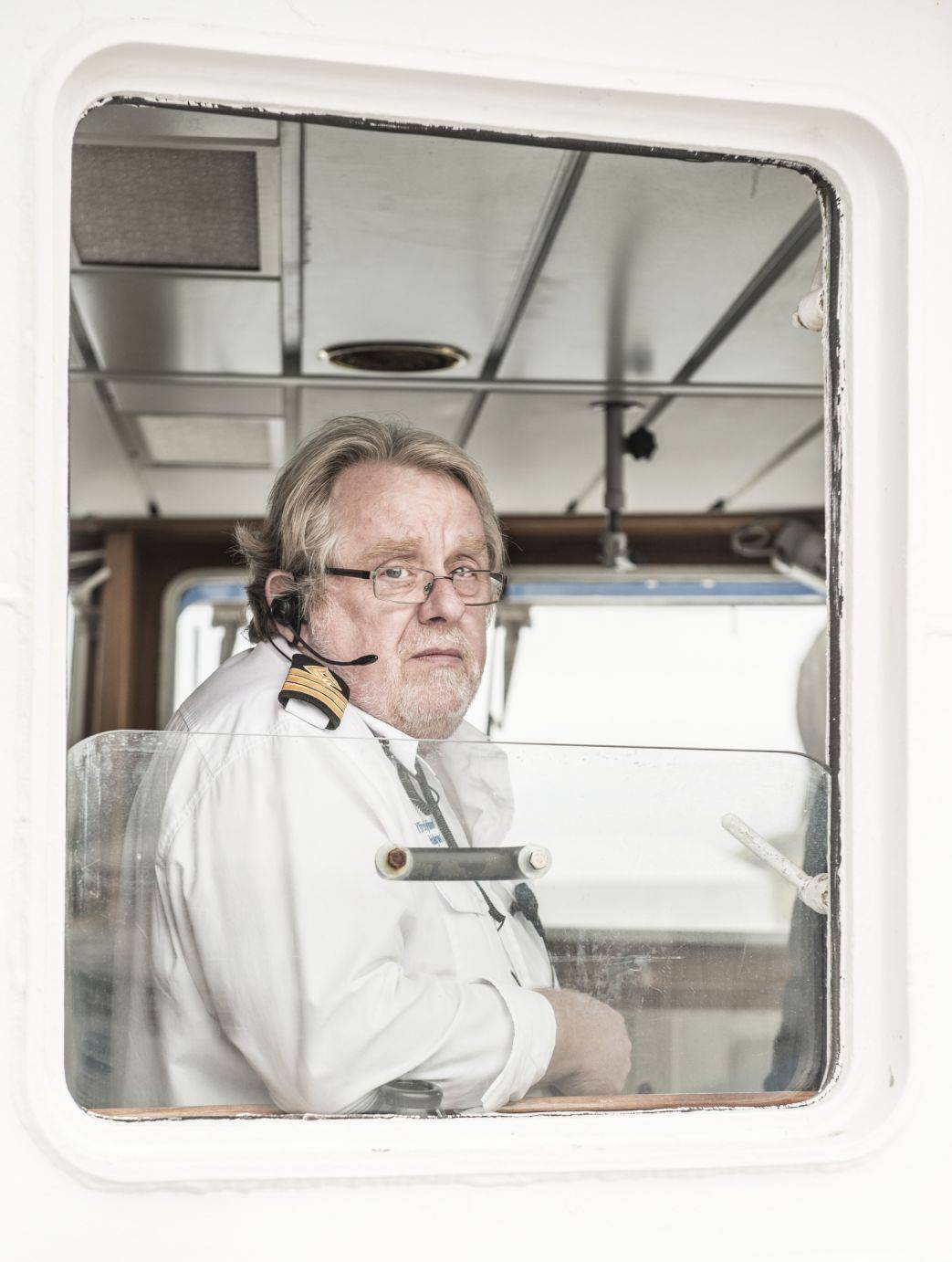 The Herjólfur ferry travels from Landeyjahöfn on the mainland to the Westman Islands five times a day, Eleven euro is the pleasant price of a pleasant 35-minute boat trip. Depending on how one defines an island, the Vestmannaeyjar consist of 19 steep, sparsely vegetated rocky islands rising up out of the sea.

Raw and rugged, they don’t look very inviting at first. Until you get closer that is…

The Westman Islands form part of the world’s youngest underwater volcanic system, with the first parts appearing above water around 10,000 years ago. At first, they are still dark silhouettes, with tall rocks and cliffs. Raw and rugged, they don’t look very inviting at first. Until you get closer that is… 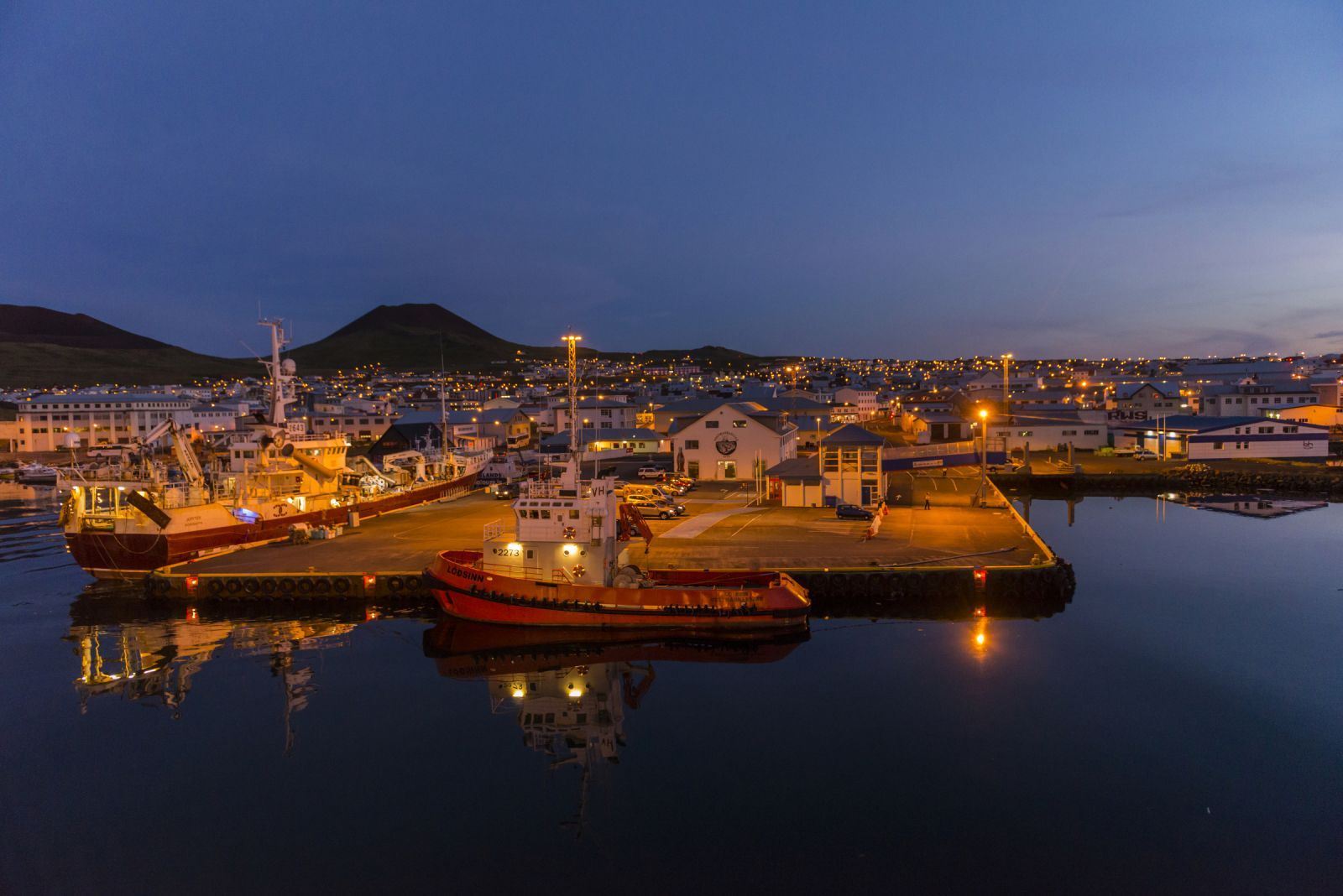 Herjólfur pulls into the natural harbour of Heimaey, the largest and only inhabited island in the archipelago. To my right are tall, black rocks, which closer to the water are coloured in various shades of algae and seaweed green. It is as if I have entered a fairytale. The twilight gives the sky a deep-blue hue. The orange light of the town frames the rocks and the water in a warm glow. Shielded by the tall rocks, fishing boats bob up and down in the harbour. Some of the vessels are lit up, their crews busy at work, whilst others snooze gently in the swell. Welcome to Heimaey, also affectionately known as the Pompeii of the North.

23 January 1973. Recently there have been several light tremors, but today the earth has torn open. First a small crack, but soon a 3km crevice opens up across the island. A spectacular lava fountain begins to spray out across the length of the fissure. It looks rather bad for the 5000 inhabitants of the island. They knew they lived on a volcano, the vast volcano Helgafell looking down over the town on a daily basis, but now a second volcano is forming at a rapid pace, and unlike Helgafell the new volcano, Eldfell (Fire Mountain), lives up to its name. Hell is trying to crawl up onto the Earth. Glowing lava flows down into Heimaey from the east as hot ash rains down. 400 houses disappear into the molten lava. The inhabitants of the village are quickly evacuated. The entire fishing fleet is in port as the previous days’ weather has prevented them from sailing out, thank God. It’s a miracle that there was only one death, an alcoholic who had fallen asleep in his cellar.

Mother Earth spews forth its magma on a daily basis. The strength of the eruption then begins to quickly peter out. In a combined effort the remaining inhabitants of the village fight to stem the tide of the lava flow by cooling it with sea water. It takes until July for the eruption to finally stop, after which the island has increased in size from 10km² to 12.5km², a 20% increase in land area caused by the cooled lava. The island has also gained a 220m high hill: the Eldfell volcano.

The islands were named after the Westmannen, the name the Vikings gave to the Irish. Back then the world ended at Ireland, the most westerly piece of land on Earth. Go any further and you’d end up falling off the edge, according to the ancient Icelandic manuscript, the Landnámabók. The colonisation of Iceland began in 870 with the arrival of the Norwegian Ingólfur Arnarson on the island’s southern coast. His brother-in-law Hjörleifur Hróðmarsson was also there, but not for long. A year later Hjörleifur was murdered by his Irish slaves, who then fled to the islands following their foul deed in order to escape the wrath of Ingólfur. The plan didn’t entirely work out as planned, as Ingólfur slew the Westmannen one by one. From that moment the islands were known as the Vestmannaeyjar, a.k.a the Westman Islands. 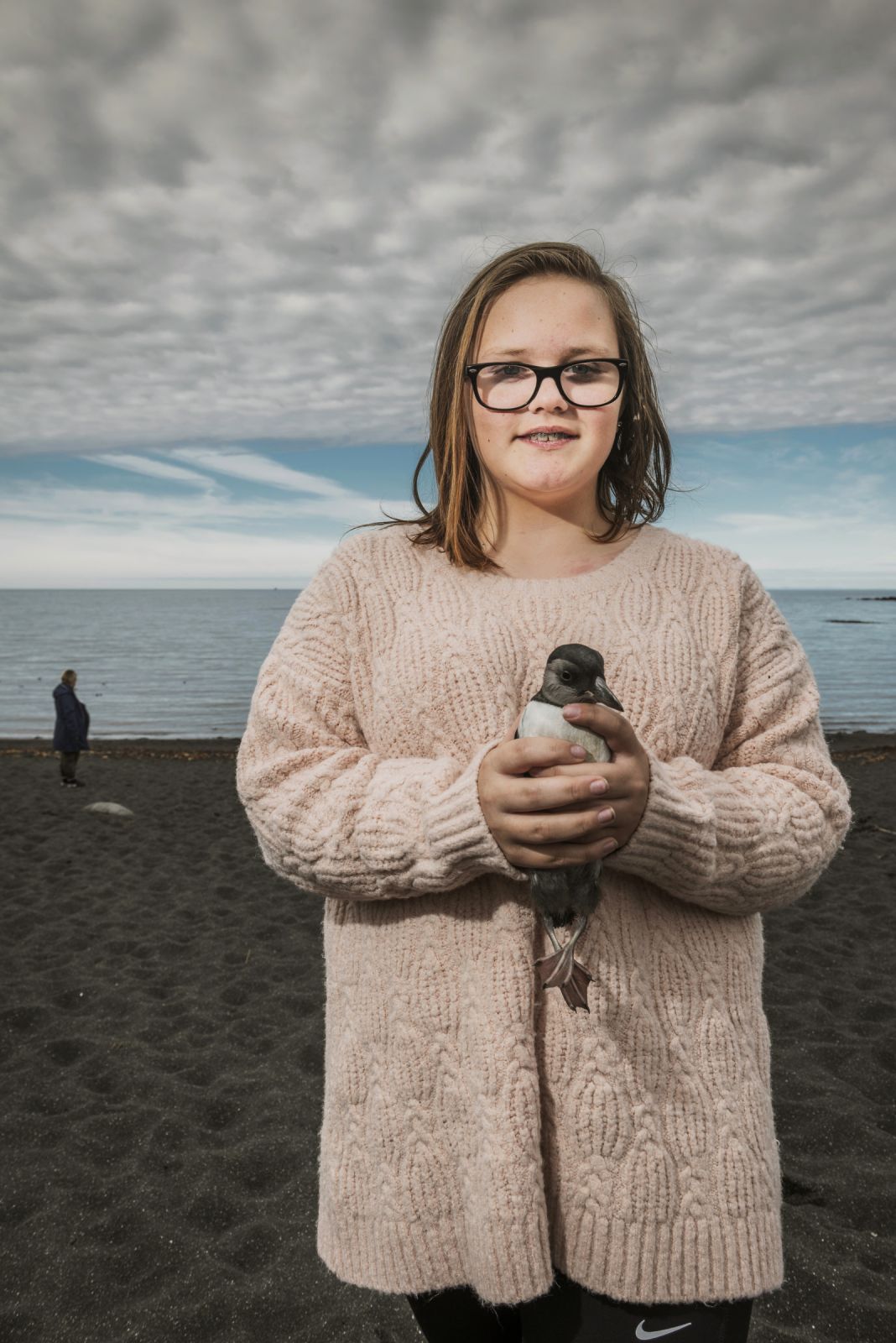 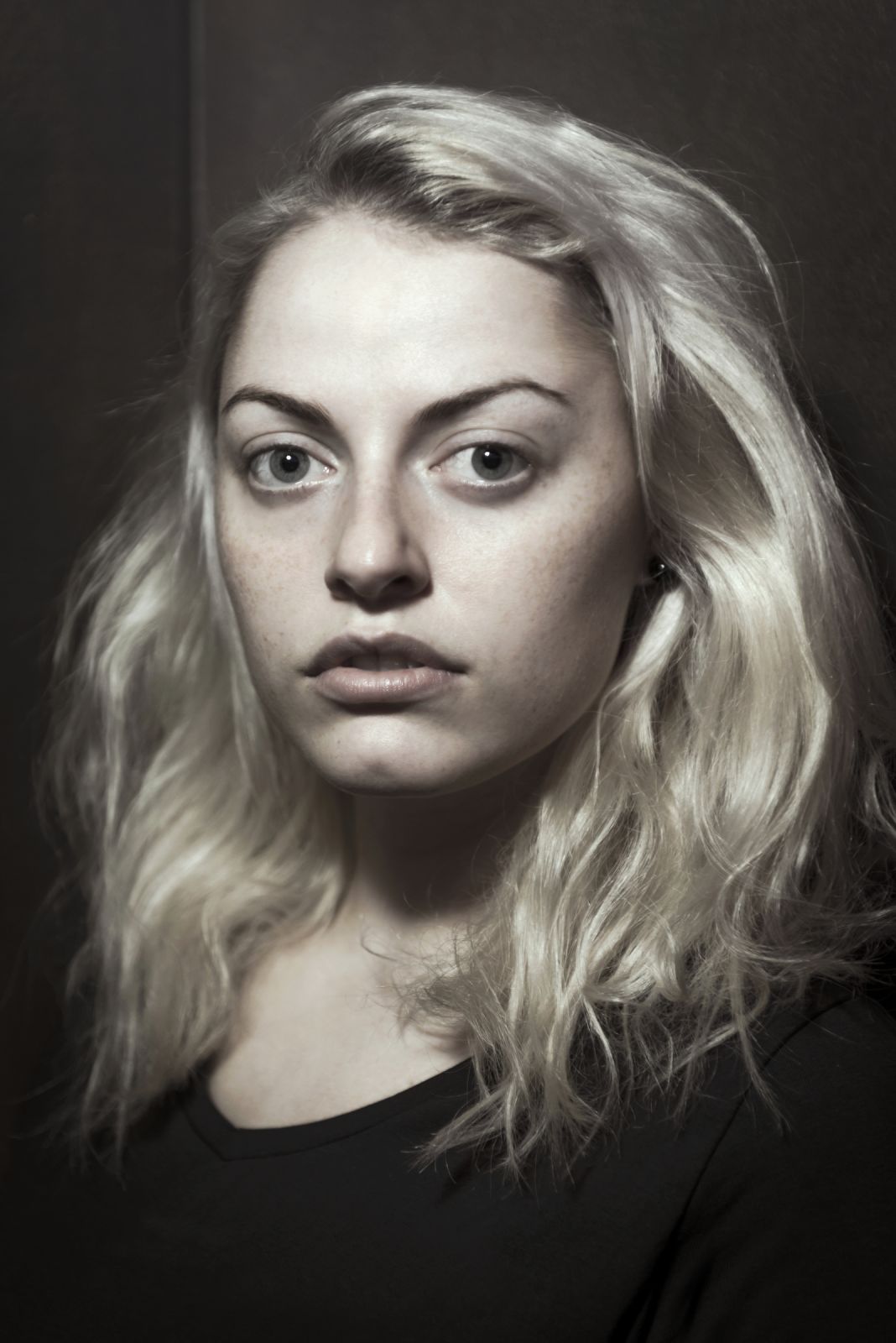 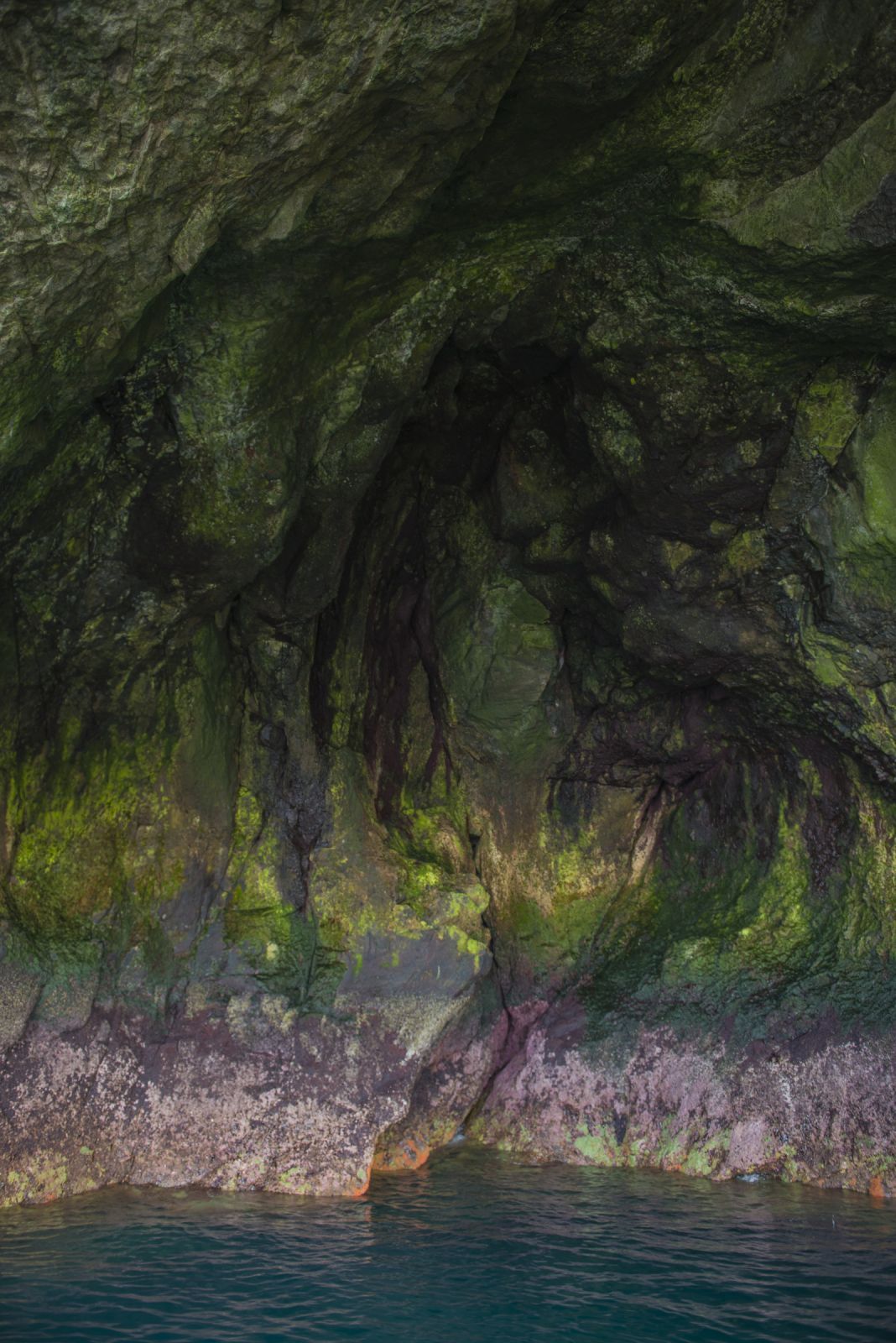 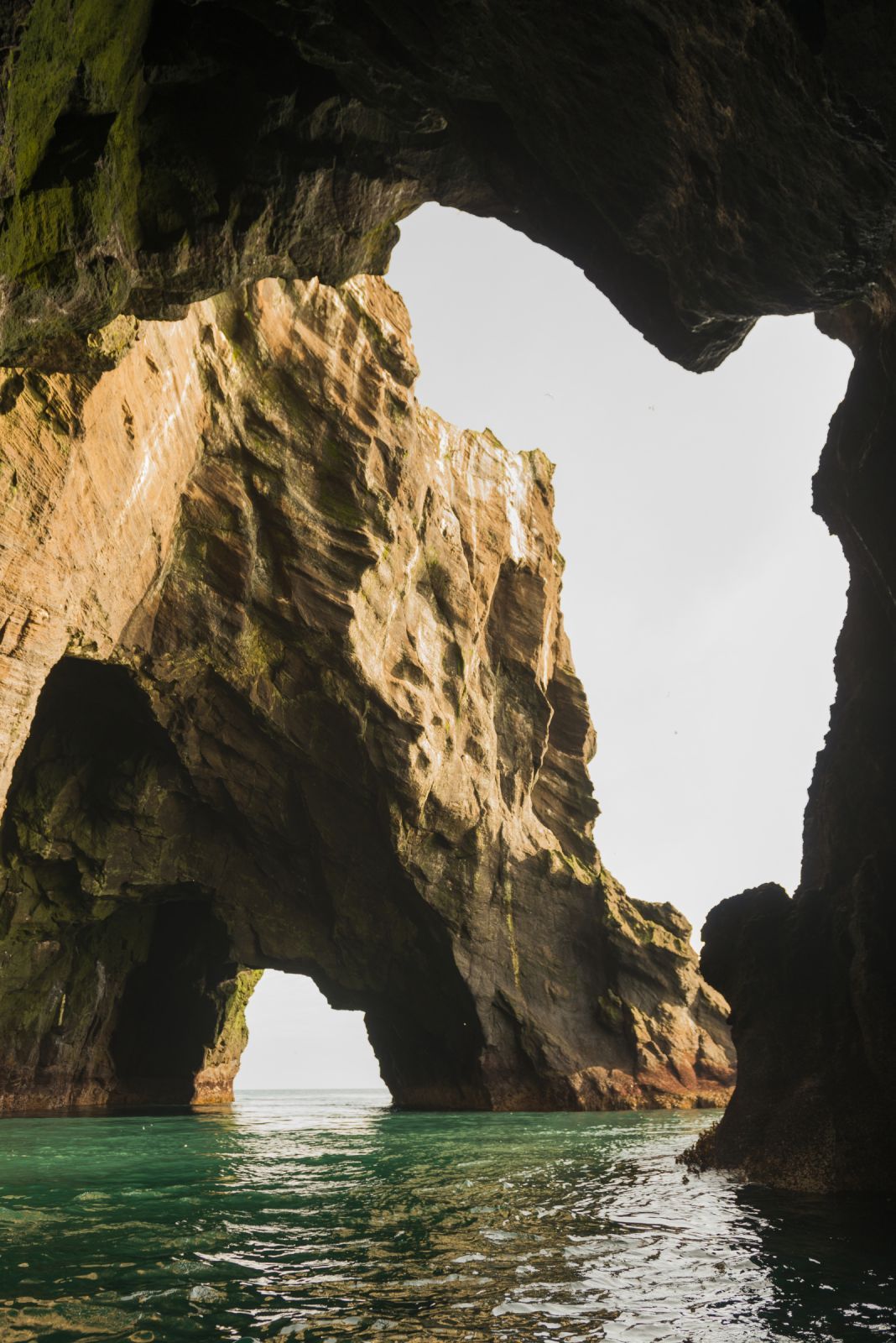 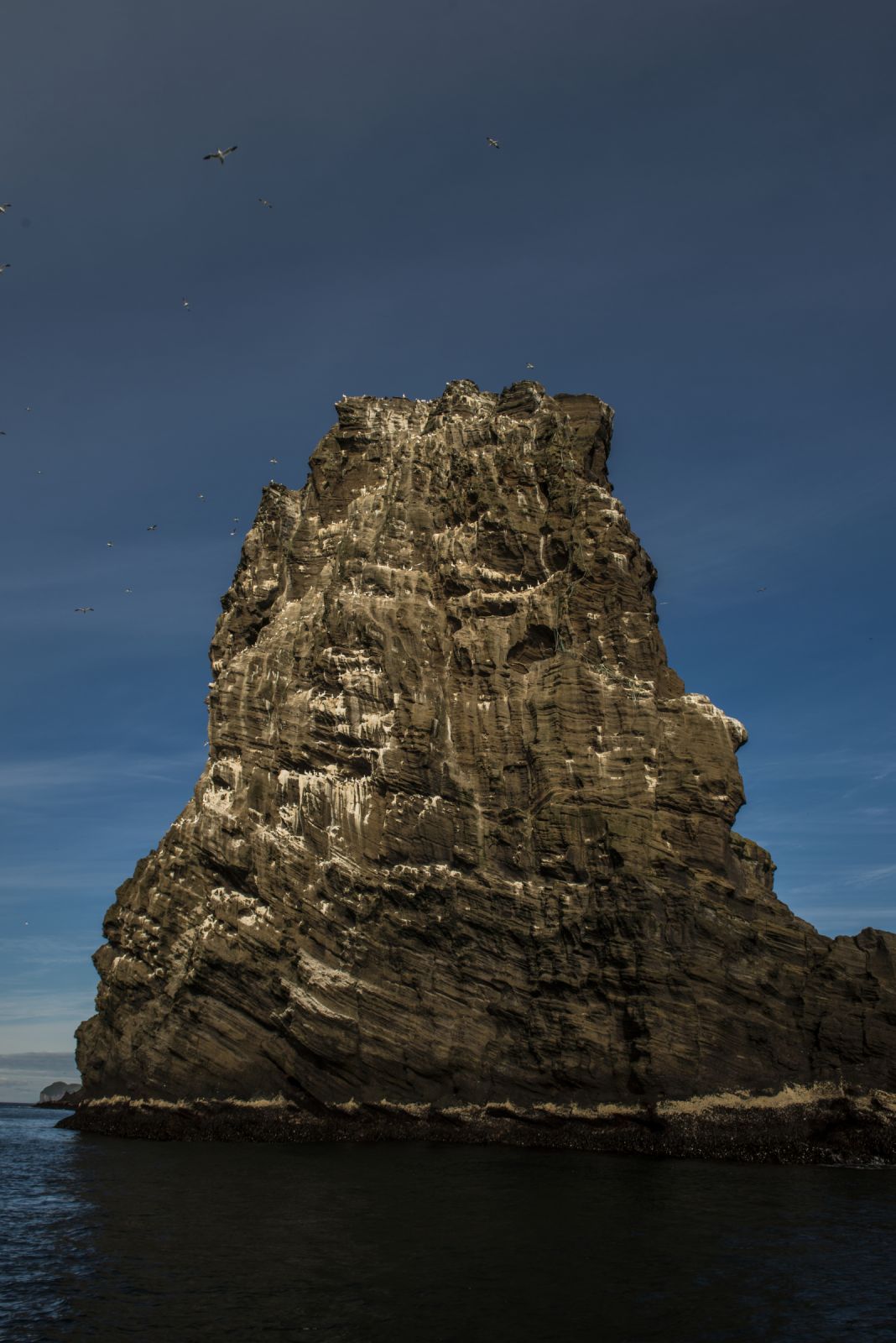 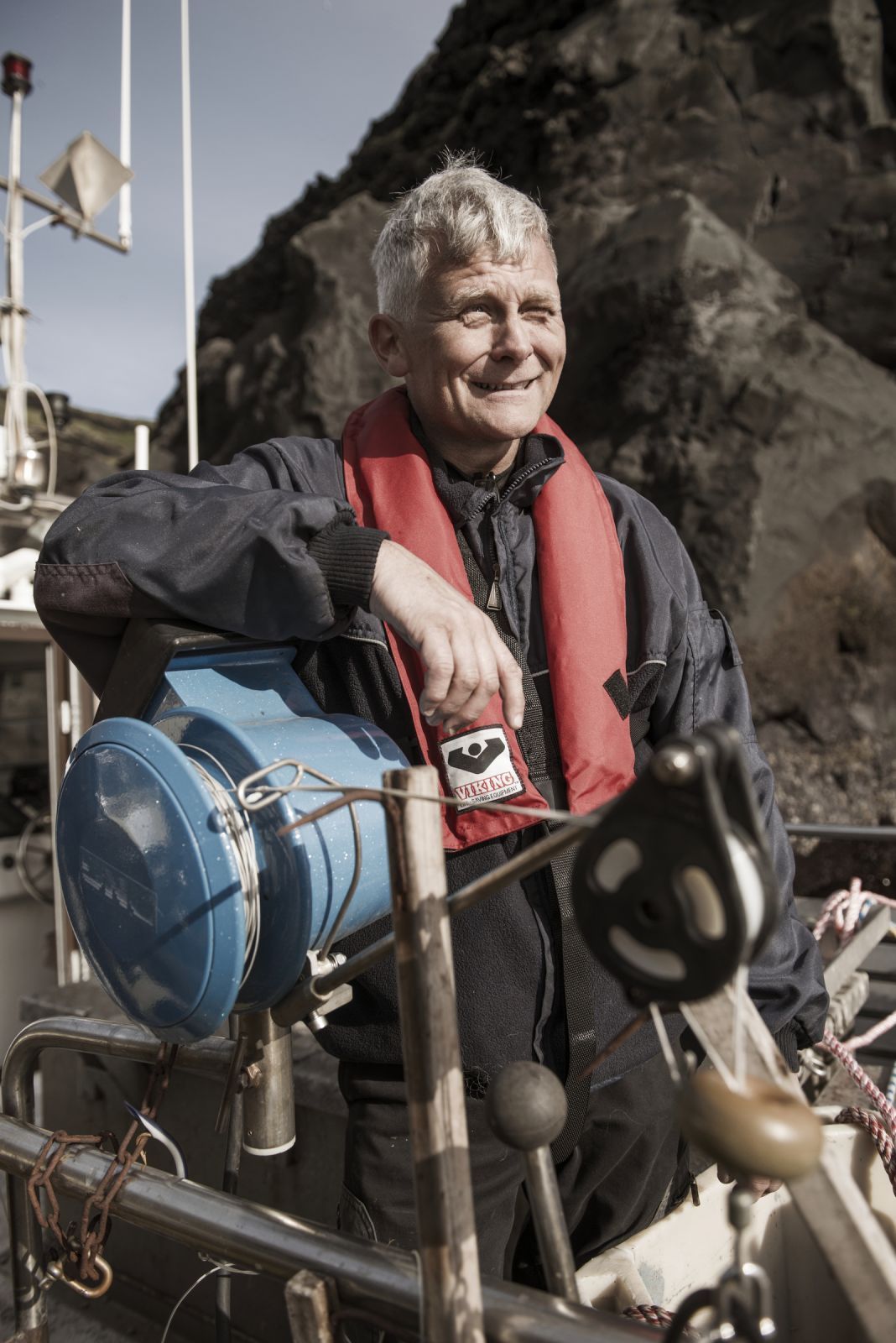 Today Heimaey has a population of around 4500 people, which leaves them in a minority compared to the 4 million or so puffins that also inhabit the island. They build their nests, together with other seabirds, on the steep cliffs of the smaller islands. In August and September, the puffins abandon their nests in order encourage their young to also leave the nest. The young birds are attracted by the lights of Heimaey and fly down into the village in droves. The children of Heimaey are allowed to stay up later during these summer months, during which there are whole competitions to see who can save the most baby puffins, with some children catching up to 4 in an evening. The little birds can stay in the house overnight and are then released the next day. A noble sport indeed.

The island of Surtsey is only 50 years old, the product of an eruption that took place between 1963 and 1967

We thunder at some speed over the crests of the waves between the smaller islets that make up the Westman Islands in a yellow speedboat operated by Ribsafari.is. We stop and float a while near Geirfuglasker, where the rocks have been coloured white by bird faeces. “Gannets. Hundreds of thousands of them” the boat’s captain informs us. Not long afterwards we see the tail of whale plunging down into the water off the starboard side. “This is the only season where I’ve seen 9 different kinds of whales here,” says the captain. After sailing for half an hour we reach the island of Surtsey. 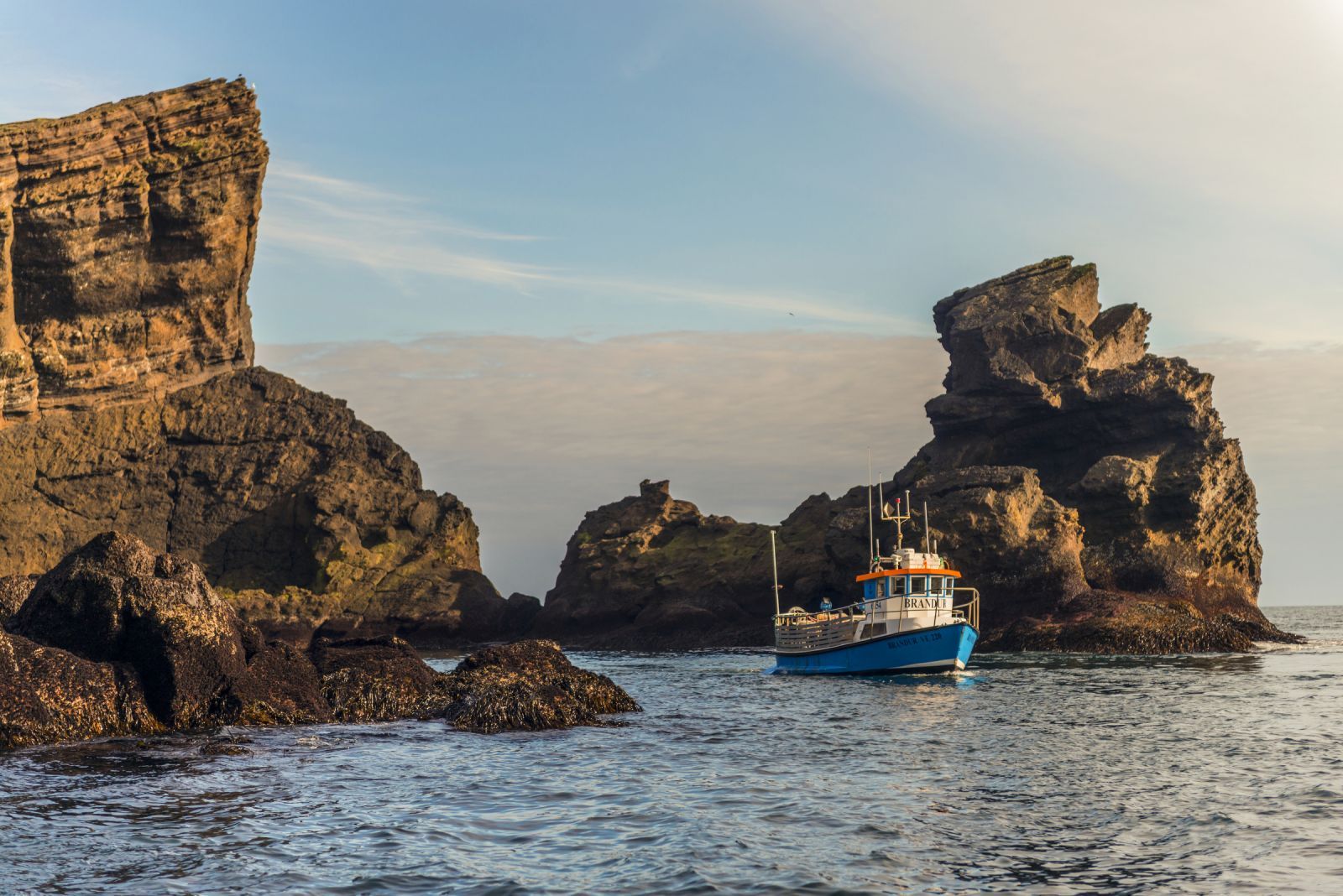 Not that we can land there, however. Surtsey is out of bounds, as scientists are still conducting research on this unusually young piece of earth. The island is only 50 years old, the product of an eruption that took place between 1963 and 1967, making the island particularly interesting. How does life begin on such a new island? What grows there first? Human visitors could upset the delicate balance, hence why we are floating just off the shore. The sea lions sunning themselves on the rocks take no notice of these restrictions, or of us in fact.

That evening we find ourselves sitting in Tanginn, a splendid little restaurant in Heimaey harbour. When we order lobster tails the blonde Icelandic waitress walks out of the restaurant. In the water, barely 10 metres from the restaurant hangs a large basket. She collects a couple of lobsters and wanders back into the kitchen, and not long after returns with what are the freshest lobster tails we have ever tasted.

The next day we sail aboard the Herjólfur out of Heimaey. As we leave the mouth of the natural harbour the island disappears from sight, with only the dark black rocks looming over us. Heimaey seems like a fairytale world that disappears as soon as you avert your gaze. The sea stretches out before us, the flock of seagulls flying merrily alongside us, ever in hope of a fish being thrown their way. The air has a hint of salt. Behind us the jagged peaks of the Westman Islands get smaller and smaller, silhouetted against the blue morning sky 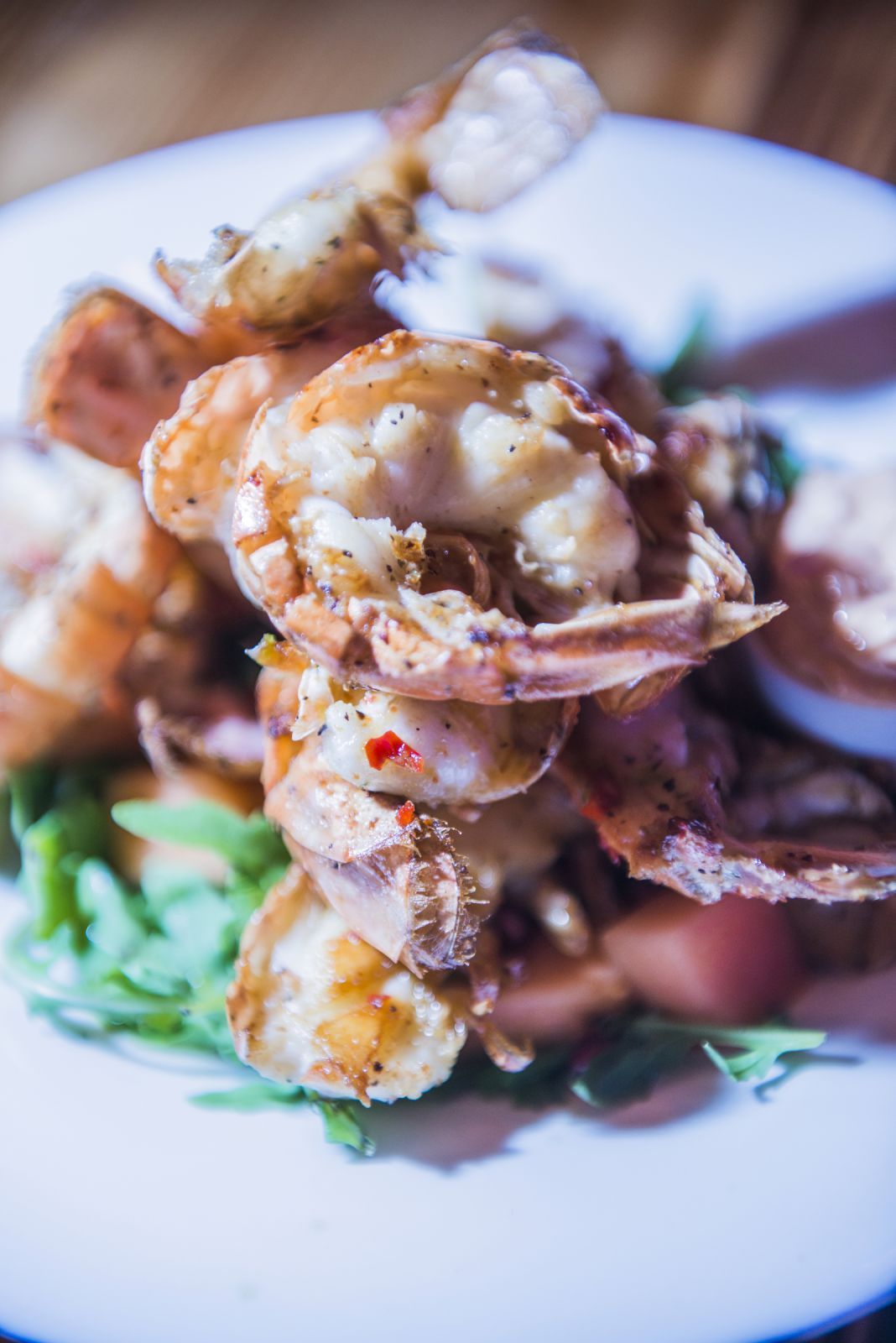 Book the perfect journey to Iceland and the Westman Islands with Askja Reizen, the Iceland expert.

More information on traveling to Iceland